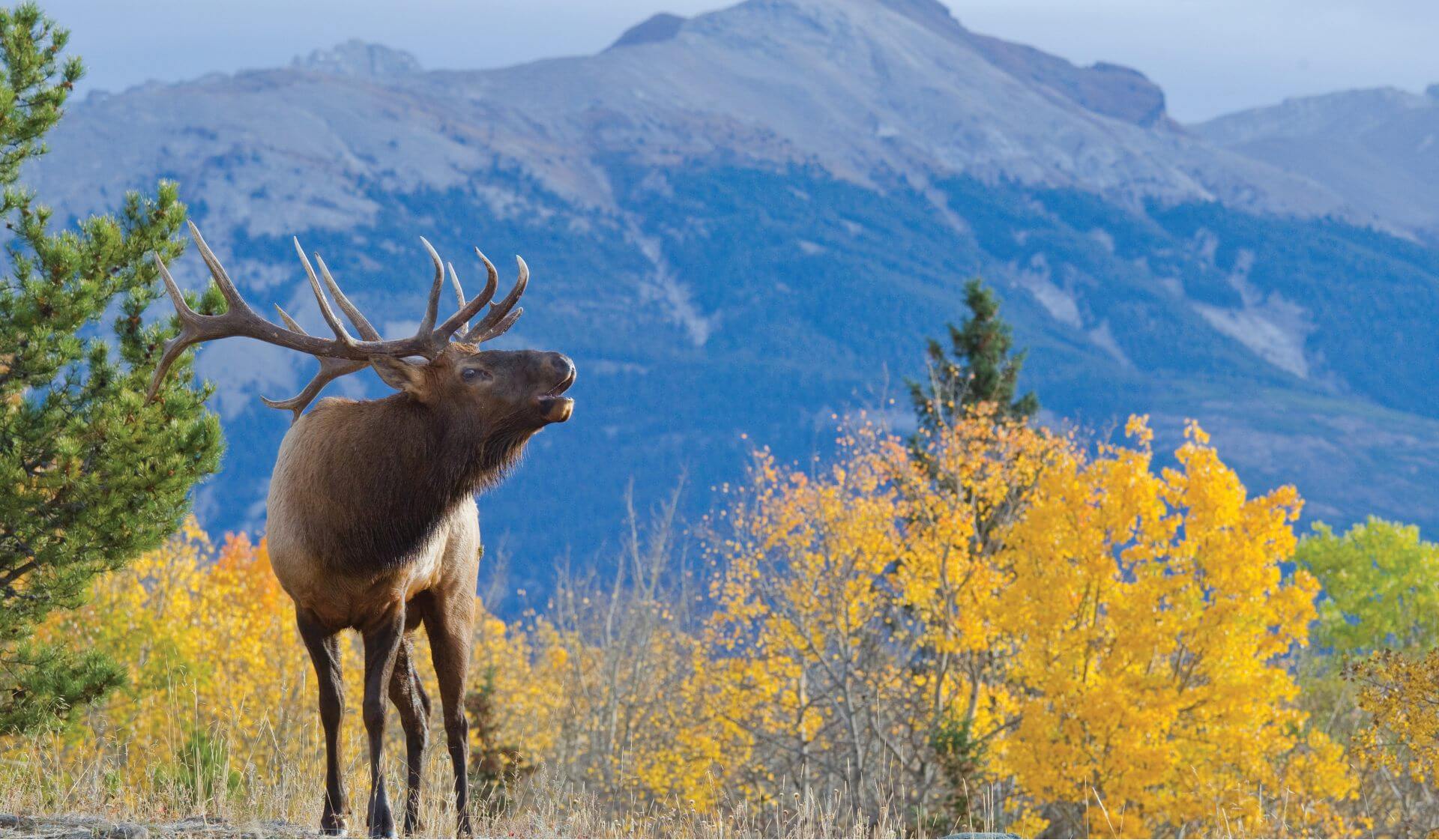 The first time I heard an elk bugle, I was a greenhorn teenager sitting on a mountainside in southern British Columbia’s Selkirk Mountains, miles from the nearest road. My father had kindly brought me along on a wilderness horseback hunt, with elk as the primary quarry. By that time, I had taken a couple of mule deer, but had never even seen an elk in the wild. I had, however, spent my young life around horses and was in the kind of physical condition one will never again enjoy after reaching age 30. Nonetheless, my legs ached from days spent climbing mountains and my butt felt profoundly saddle sore. The elk had yet to make an appearance. 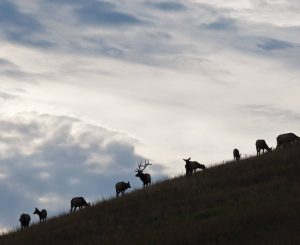 A dominant herd bull tends his harem of cows during the late September rut.

After a morning of climbing to reach a remote alpine basin, my guide Chet and I had paused for a hard-earned rest. (This was my first and last guided elk hunt.) My breathing and heart rate had barely returned to baseline when Chet raised his hand in a universal sign-language request for silence. As he pointed across the basin moments later, I heard it too: an eerie, quavering series of notes that suggested hints of many familiar sounds without accurately mimicking any of them. Despite my lack of familiarity with elk, I knew nothing else could have produced such haunting music.

Chet reached into the pocket of his wool coat and pulled out a little instrument that looked like something a junior high band instructor might assign to the most tone-deaf kid in the class before sending him to the back row. The sound it produced when Chet blew through it didn’t really match what I’d just heard, but it was apparently close enough. We received an immediate answer from somewhere in the timber below us, and then the most majestic- looking antlered animal I’d ever seen marched across open ground in our direction. The bull wound up right in front of us, proximity that translated into a chip shot for my rifle. Around the campfire that night, I realized that the most memorable part of the experience was not the dead bull, but the otherworldly sounds he made during his determined approach.

I have listened to a whole lot of elk during the 50-odd years since then, and converted my share of them into venison with a traditional longbow. But the sound of a bull’s bugling has lost none of its impact and can still take my breath away, whether I’m hunting with a bow, a camera, or nothing but my ears. To truly appreciate the pageant, one must understand the dynamics of elk breeding season, beginning with the conclusion of the previous year’s version. 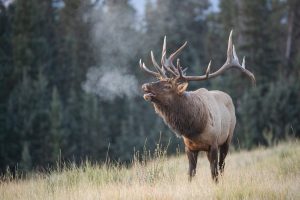 On a chilly autumn morning, condensed water vapor issues from a bugling bull.

First, some confusing taxonomy. For years, biologists considered North American elk conspecific with the Eurasian red deer, Cervus elaphus. However, recent DNA evidence suggests that elk are a unique species, Cervus canadensis, although both scientific names sometimes appear interchangeably. To further the confusion, representatives of the elk subspecies that inhabit Montana can be called either Yellowstone or Rocky Mountain elk to distinguish them from the larger Roosevelt elk in the Pacific Northwest and the smaller tule elk in California. I can only apologize for this chaotic nomenclature, which is not of my making.

The gestation period for elk is around 250 days. The peak of the breeding season, or rut, occurs from mid- September through early October, so when the cows drop their calves in late May and early June, they are right on schedule. Cow elk can be aggressively protective of their newborns, and anyone observing or photographing elk at that time of year should treat them with respect and keep their distance.

Elk segregate by gender and age class over the summer: Cows, calves, and immature bulls congregate together, while mature bulls disperse into small bachelor groups. Pre-rut behavior begins as early as late August, when some bulls begin bugling and sparring lightly as they start to assert dominance. Over the next few weeks, mature bulls establish harems, keeping cows together by herding them like sheepdogs, while they chase rival bulls from their territory. At first, these clashes seem stylized, involving little more than noise accompanied by gentle pushing and shoving. Their intensity then increases, with the sound of crashing antlers reverberating through the hills and the losers sometimes sustaining serious injuries or even death. 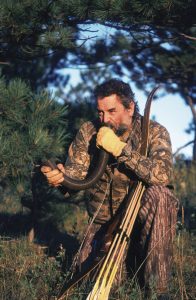 A younger version of the author extends an invitation to a bull elk during archery season by inhaling sharply through a length of hose.

Elk of both sexes are highly vocal animals, and the classical bugle is just one part of the chorus. Cows and calves chirp and squeal back and forth to each other throughout the summer, and startled elk of either sex emit a characteristic alarm bark, an unmistakable sound familiar to (and dreaded by) all experienced elk hunters.

I find it difficult (or impossible) to express the sound of an elk bugle in words. Typically, what begins as a deep, guttural growl ascends a three- to five-note scale, becoming progressively higher and clearer before descending to end in a whine, cough, or grunt. Sometimes, one hears an aspirated noise like a vacuum cleaner starting up at the beginning of a bugle. Elk produce these sounds by exhaling through their nasal turbinate bones. I’ve heard a wide range of adjectives used in attempts to describe an elk’s bugle: musical, whistling, resonant, screaming, eerie — take your pick. All may be accurate to some degree, but none does justice to bugling’s complexity of sound. Full appreciation can only be achieved by hearing bulls sing live and in person.

Part of the impact of such encounters derives from the dissonance between the sound of the bugle and the sight of the animal producing it. Anyone who has seen good photographs of elk can appreciate what regal looking animals they are, but it’s hard to imagine any large mammal capable of producing a sound like an elk’s bugle. All who share my fascination with wildlife should seek out the experience as a reminder of nature’s ability to amaze.

There is considerable variation among the sounds made by individual elk, just as there is among human voices. Older bulls’ bugles tend to be deeper and more resonant than the high-pitched sounds spike and rag-horn bulls typically produce, but I’ve heard numerous exceptions. Now that calling elk into close range has become a staple technique during the early archery season, a bugle may be coming from a human rather than an elk. While it’s always hard to sound better than the real thing, some of the sloppiest bugling I hear in the woods comes from elk and some of the clearest from hunters. 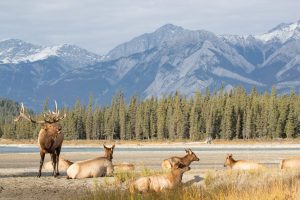 A large bull elk bugles to deter challengers from approaching his harem of cows.

While bowhunting in a remote area late one evening, I received some terrible replies to my blind “inquiry” bugle, convincing me that I had called in another hunter, at which point I retreated back to camp. Although I limited myself to occasional soft cow chirps and never bugled again, those pathetic squeals followed me all the way home. When I set out again the following morning, the snow revealed that I had in fact been running away from a mature bull the whole time. Lesson learned: When in doubt, assume it’s the real thing until your eyes tell you otherwise.

Like most natural phenomena, the complexities of the elk rut serve a definite purpose which, as usual, involves ensuring that the most adaptive genetics get passed along to the next generation. Cow elk in estrus will preferentially breed with dominant bulls, the fittest in the herd. All of this ritual behavior serves to identify those superior animals at the expense of younger, submissive bulls that would contribute less to the fitness of the next generation. The health of the herd is better served by young bulls being driven from a harem by ritual behavior than by potentially fatal combat. This may seem an unsentimental explanation for such dramatic behavior, but that’s the way nature works.

Non-hunting observers are best served by finding elk in localized areas closed to hunting during the autumn rut — not because there are more elk in those places, but because those that are there will be less wary. The northern reaches of Yellowstone National Park long enjoyed a reputation as one of the best places on the continent for this purpose, although elk numbers there have declined substantially over the last two decades. The degree to which reintroduced wolves have contributed to this decrease in the elk population remains a contentious subject beyond the scope of this discussion. 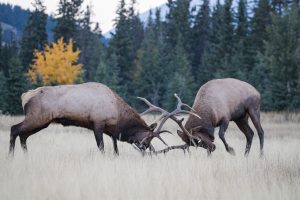 Two mature bulls engage in ritual combat to establish territory and defend access to their cows.

Fortunately, alternatives are available. The two words in the title of this piece may be alliterative, but they are not entirely accurate. When I was growing up, most people considered elk inhabitants of remote mountainous areas, but that was not the case historically. While the Lewis and Clark journals contain remarkably detailed and accurate descriptions of numerous species then known little or not at all east of the Mississippi, they express no such sense of novelty toward elk, despite the expedition’s frequent encounters with them out on the plains. When elk are mentioned at all, it is usually in reference to their value as a food source. (During the difficult winter on the Pacific in 1805–06, the explorers depended almost exclusively on elk as a food source, killing some 140 of what would later be recognized as the Roosevelt subspecies.) Elk were no novelty to Lewis and Clark because, at that time, they were still abundant on the Eastern seaboard.

Today, thanks to sound wildlife management, elk populations have rebounded on eastern Montana’s prairies, which now offer some of the best opportunities to observe them in places like the Charles M. Russell National Wildlife Refuge (CMR) and the American Prairie Reserve. On the CMR, the Slippery Ann Elk Viewing Area, just north of the Missouri River and east of U.S. Highway 191, can be spectacular in mid-September. Those who have not seen and heard this remarkable natural phenomenon owe themselves a visit.