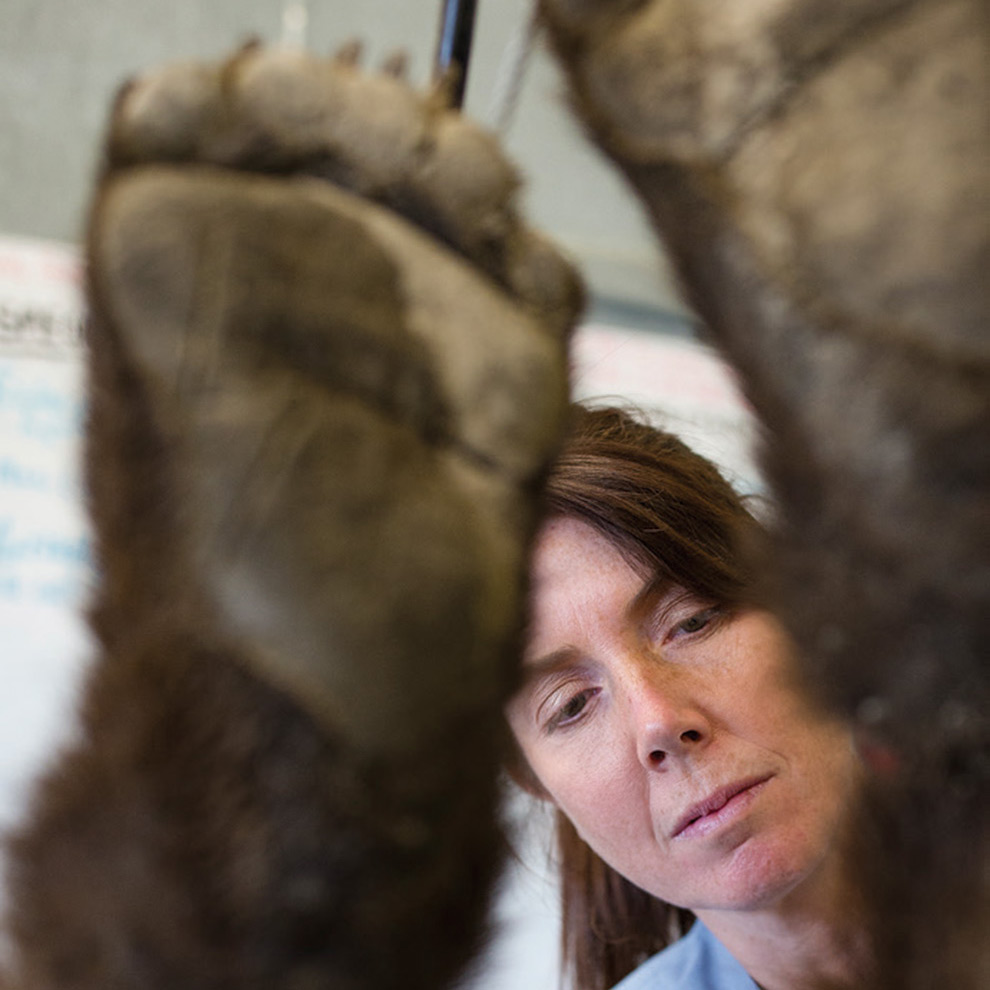 In order to perform a necropsy on this particular animal, Ramsey first has to remove the skin. Photo by Allen M. Jones

The partially frozen grizzly bear has been laid across the concrete floor. Dried mud is caked on its pelt and the bullet hole behind its front shoulder is hardly visible in the thick, dark chocolate-colored fur.

How it died is no mystery. The bullet clearly was meant to kill. It hit the bear in the vital area — heart and lungs — just like they teach you in hunter’s ed. Chances are, however, the person who shot this bear was either asleep during the part of hunter’s ed that taught ethics, or didn’t take hunter’s ed at all.

This grizzly was found dumped in a creek in Northwestern Montana: a federally protected animal, the victim in an unresolved poaching case.

The young male bear is thawing on the cold floor at the Montana Fish, Wildlife & Parks (FWP) wildlife health laboratory in Bozeman, awaiting a necropsy (the animal version of an autopsy) by FWP wildlife veterinarian and lab director Dr. Jennifer Ramsey. It’s the fourth grizzly bear she has processed in the span of two weeks.

Since grizzlies are protected under the federal Endangered Species Act in every place in the lower 48 states except the greater Yellowstone area (at least that was the case at press time; legal maneuverings may have changed its status by the time you are reading this), the U.S. Fish and Wildlife Service wants to know specifics when one is found dead.

As far as necropsies go, grizzly bears might be the most glamorous to an outsider, but they’re one of messier creatures to dissect, Ramsey says. Even one in poor health typically has a heavy layer of fat that can make the work greasy — and stinky. Plus, they’re often big and hard to maneuver around the lab.

First things first. She lifts the bear off the ground with a pulley and gets a weight: 308 pounds, not huge by grizzly standards. Ramsey figures the bear is between 3 and 4 years old.

While it’s hanging, she makes incisions above the feet and begins skinning the animal much like any hunter would do — from hind legs down to head.

An old, banged up AM/FM radio plays in the background, turned up a bit to be heard over the noise of a giant ventilation system, which helps keep the smell down a bit.

Still, the fragrance in the room is hard to avoid. A large walk-in freezer is on the far end of the room and inside are various critters awaiting a necropsy or other cataloging. Elk legs stick out of big, gray plastic bins. A dead hawk lies frozen on a shelf. The smell of dead animals is strong. Ramsey says she’s used to it, but also says it can permeate your clothing and your hair. This bear isn’t too stinky, comparatively. It was found relatively soon after it was poached, and was frozen at the FWP office in Kalispell before being transported to the lab in Bozeman. 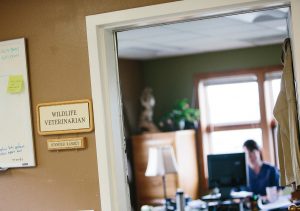 Working in her
Bozeman office, Ramsey receives information and emails from Montana Fish,
Wildlife & Parks districts around the state. Photo by Adrian Sanchez-Gonzalez

Despite the animals and wildlife staff who come in and out, Ramsey’s workspace has a distinct order to it. Bins neatly line countertops. Cupboards are organized and labeled. A whiteboard keeps track of animals waiting in the freezer and the lab needs — drugs, materials, equipment — from other areas of the state. It’s not your typical lab — don’t think white lab coats and microscopes. Where Ramsey does her necropsies, it’s more like an operating room without the sterility.

“Hang on Sloopy” comes on the radio, and Ramsey’s head pops up from her work.

Turns out the song is synonymous with Ohio State University where Ramsey earned her doctorate in veterinary sciences. She starts humming as she peels the bear’s hide down its back, cutting here and there. White fat surrounds the carcass and the smell gets more pungent.

The entry and exit wounds become visible as Ramsey finishes skinning the animal, leaving only the paws intact. She lowers it to the ground and begins the process of opening the abdominal cavity.

Overall, the bear was healthy when it was shot. The rifle bullet damaged both the heart and lungs of the bear before it exited. The necropsy for this bear is straightforward. 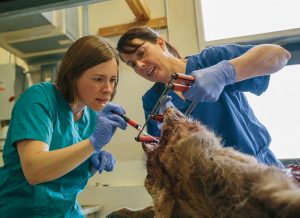 Jennifer Ramsey and Emily Almberg perform a
necropsy on two bighorn sheep ewes at FWP’s
wildlife health lab in Bozeman, Montana. They
are trying to find if the cause of death for the
sheep was pneumonia, a concern for wildlife
conservationists
attempting to grow the population
of bighorn sheep in Southwest Montana. Photo by Adrian Sanchez-Gonzalez

Ramsey has necropsied many different creatures, mostly in search of some clue as to how they died. Owls found dead in a backyard. Ducks found dead in a pond. Deer that were euthanized because they were too sick to survive. Moose that were gaunt with bald spots, covered in what seemed like a million bulging ticks. Some she processes in the lab in Bozeman, others she can work on in the field. She doesn’t necropsy every dead animal that comes through the door, but if there’s a need to investigate why the critter died, Ramsey will take a look.

Necropsies are only a small part of the work FWP does at the wildlife health lab, as they search for answers to diseases affecting Montana’s wildlife populations. Ramsey is part of a team that includes lab technician Keri Carson and disease ecologist Dr. Emily Almberg. The three women (all based in Bozeman), work with other FWP staff — mostly biologists and wardens — from around the state. Some of the work involves research requiring the capture and tranquilization of wildlife, to test for diseases or to stop conflicts with humans. Other times they collect samples from dead animals to look for certain diseases.

In recent years, the rise of and concern about wildlife diseases has necessitated a shift in focus to disease management and ecology (or how diseases manifest themselves and move through wildlife populations). It used to be that much of the generic lab-type work needed around the state was done by the lab staff. But animal disease issues continued to emerge and take up their time. So now FWP field biologists do much their own basic lab work, and the wildlife health concerns are now the focus of Ramsey, Almberg, Carson, and the wildlife health program. 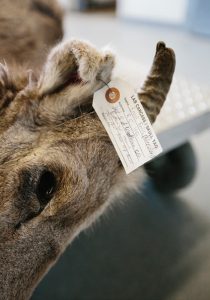 Ken McDonald is the wildlife division chief for FWP. He sees the health lab’s role as critical to the health of Montana’s wildlife population, and key to managing the public’s trust. “We’ve focused our efforts, through the lab, on research and monitoring in an effort to meet the expectations from the public,” McDonald says, “and making sure that we’re doing what we can to manage existing diseases — preventing them, if possible — and monitoring for new diseases that may crop up.”

The reason for the shift in focus at the lab was due to emerging wildlife diseases and their potential impacts on wildlife, livestock, and humans, McDonald adds.

Like FWP staff, ranchers in Montana are concerned about diseases like bovine tuberculosis or brucellosis, which can be transmitted from wildlife to livestock and vice versa. Wildlife enthusiasts and hunters are concerned about diseases that can lead to population declines, like pneumonia in wild bighorn sheep, arterial worms in moose, or hemorrhagic disease in deer. The public at large is concerned with diseases that can be transmitted to people, like avian flu, anthrax, and tuberculosis.

There’s no real way of knowing if wildlife diseases are on the rise, or if people are more aware of them now, according to Almberg. “We just don’t know if there’s an uptick,” she says. “People probably weren’t looking before.”

A good example is the mysterious case of the crossbills, small songbirds common in Montana. Early each spring many of them turn up dead in yards around the state.

It’s something that’s probably been happening for years, Almberg says. But as people have grown more interested in the wildlife in their yards, they’re paying attention to what’s happening to the crossbills.

Turns out the answer is simple — they drink themselves to death. 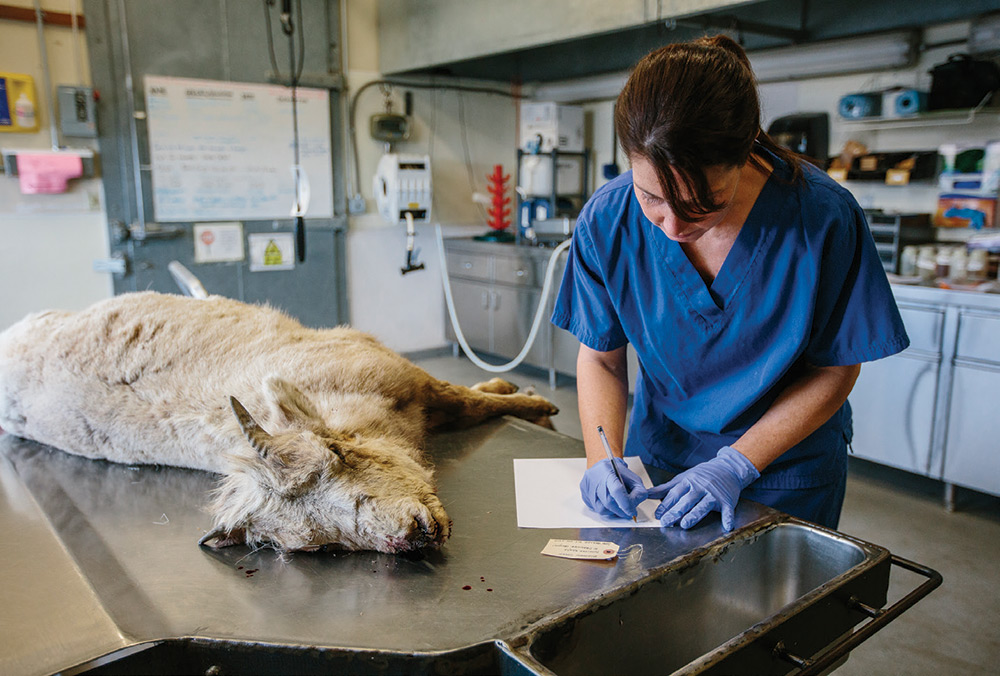 Crossbills like to feed on fruit — crab apples, prunes, cherries — that has overwintered on trees and fermented. The little birds gorge themselves and die. “They basically die of alcohol poisoning,” Almberg says. “It happens every year.”

But other diseases they’re seeing could raise serious concerns.

In the last couple of years, the lab has received an increasing number of owls that have died under mysterious circumstances. Many of them are great horned owls that have died of a herpes virus. The virus is common in pigeons and doves, but they are what Almberg calls “non-symptomatic carriers” — the virus doesn’t bother them. When they become dinner for an owl, however, the result can be deadly.

It’s hard to say if this disease is on the rise or if it’s just being noticed more by the public, she says. But with the proliferation of the nonnative Eurasian collared doves around cities and towns in Montana, there could be a new and expanding disease vector on the landscape.

And what about climate change? Could it be leading to more wildlife diseases? 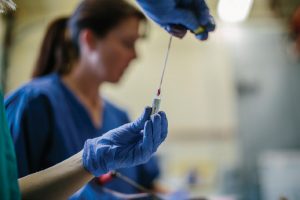 Diseases like West Nile virus (which originated in Egypt), certainly are being helped by warmer years, and by more connectivity between populations around the world. Another issue possibly related to climate change, one that’s currently plaguing Montana’s moose population, is winter ticks.

Montana has a species of tick that overwinters on animals, breeding and laying eggs. In recent years, moose in Montana have struggled to fight off the ticks. Sometimes Ramsey will necropsy a moose with hundreds of ticks in a 6-inch-square spot. The ticks can cause the animals to rub the hair off their hides and eventually become anemic from loss of blood.

Almberg can’t say definitively why winter tick infestations are worsening for moose, but it could be warmer winters due to climate change. She can’t rule it out. It could also be that tick populations are cyclical and we’re seeing an upswing in numbers. Winter ticks were always there, they’re just more of a problem now.

The health lab is actively working to monitor diseases like brucellosis, which infects elk and bison, and can be transmitted to cattle. Ranchers are keenly concerned with this disease as it can cause cows to abort their fetuses. The disease is most prevalent around Yellowstone National Park.

Or take pneumonia in bighorn sheep. This disease has decimated specific herds in Montana, making it difficult to establish new herds and keep existing ones healthy. The disease spreads to wild sheep from domestic sheep, which are non-symptomatic carriers. 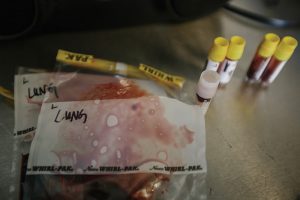 Some diseases they monitor and plan for haven’t made their appearance yet. These include white-nosed syndrome in bats, a fungus that has caused the decimation of bat populations in the East. Bats, though small and relatively unnoticed, are critical for controlling insect populations.

Chronic wasting disease is another disease yet to make its presence known in Montana’s wild deer, elk, and moose populations. Also called transmissible spongiform encephalopathy, it’s similar to mad cow disease and is found in wild deer herds to the north, east, and south of Montana.

It’s FWP’s responsibility to monitor and manage these diseases, and Almberg, Carson, and Ramsey’s efforts are critical. They instruct field biologists and wardens on how to capture and immobilize wild animals and take samples in the field. They write surveillance plans and are often out in the field helping with these operations.

“A lot of people might not know we’re here or what we’re doing,” Carson says. “Still they should know that someone in the state is keeping track of dead animals and the diseases they’re dying of.”