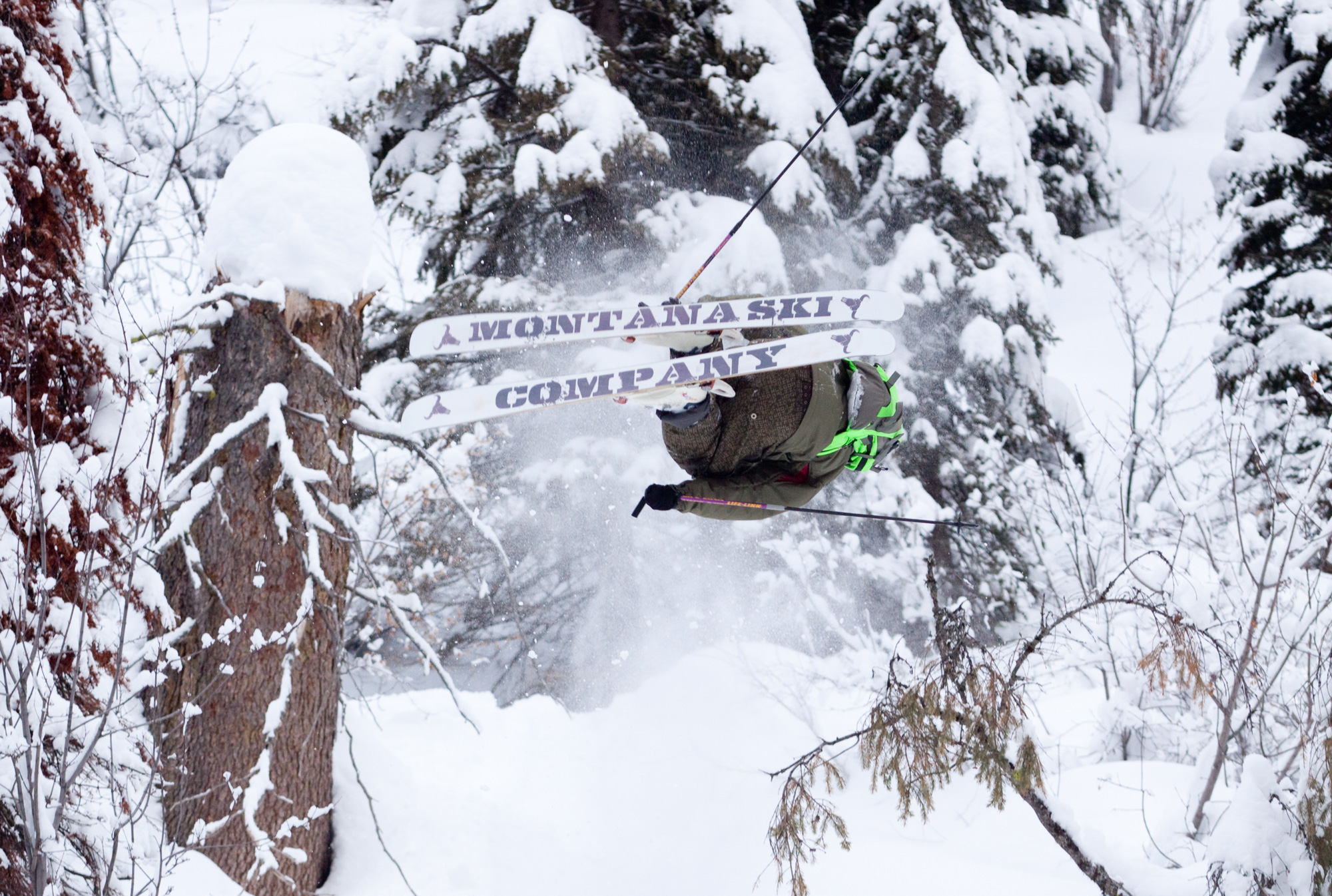 THESE DAYS, WHEN FORMER NFL QUARTERBACK Drew Bledsoe speeds down an open field, you’ll find his #11 in a peculiar place — on the custom top sheet of his skis — the 188-cm “soldier” model with a wood-grained top sheet made by Whitefish-based Montana Ski Company. A small team of dedicated lovers of sliding on snow have been creating these custom, hand-crafted skis made with sustainable Montana wood products since 2010.

“I’ve only been on these skis for three days and I just absolutely love them,” Drew told me last February at Whitefish Mountain Resort (coincidentally ranked #11 in the nation by Ski Magazine this year). “They are snappy, responsive, but still really smooth and damp. A lot of other ski companies started using all these exotic materials in skis and it turns out that good old fashioned wood is a hell of a good material for skis.”

Since 1996, Drew and his wife Maura have owned their home on Whitefish Lake and use it as a family retreat with their four children. Today, Drew is charging down this unbroken field of white with no lines and no rules, hoping that he and his business partners can score some points in the challenging but growing custom ski market.

Really, the core of this story is wood and environmental ethics — a commitment to using poplar and fir harvested in Montana and putting it together with the least harmful chemicals and plastics as possible. But look inside deeper — the wax being pressed into the base with a hot iron — and you’ll find passion and smarts in these folks that will hopefully defend against the hard knocks of a niche business in a fickle market.

This game has just begun.

While Bledsoe is an investor and serves as the spokesperson for the fledgling company that produced 150 pairs of skis last season, the guts of the organization is a small team led by founder Chad Wold and president Zak Anderson, 34, both skiers with deep Montana roots who grew up racing on the slopes above Whitefish. Wold, 40, grew up in Whitefish and Polson and completed his undergraduate work at UM and got his law degree from the University of Buckingham, in England.

“We’ve been in an incubation period, doing research, establishing the brand and perfecting our core line,” says Wold. “We are A-type guys, always trying to better performance, customization, and pricing. We’re ready to go to a bigger scale. We have a solid group of skis, a great management team, and are committed to the long term vision.”

The construction of the skis is led by mastermind TJ Sneva, 35 — who has experience with technical builds of Indy race cars — from his shop in Spokane, Wash., where the Montana wood is shipped. Three basic models that focus on backcountry and all-mountain/powder skis cover the spectrum of ski style and from these models they can tweak camber, dimensions, flex, rocker/early rise, and top sheet graphics.

Each fall, Anderson, who holds a BS in Business Administration from UM will find himself in the shop with Sneva, getting his hands dirty, learning by making mistakes in the process of making skis. Graphics guru Rose Goldthwait works with design, logos, and a new softgoods/outerwear line that will continue to help brand the company and pay dividends to the bottom line with larger margins in this arena.

Newcomer Will MacDonald, 32, joined the team this summer as the CFO, using his business mind (a Duke economics major) and ski expertise (a certified mountain guide) to court major investors. “The only way to succeed as a company like this is the passion,” says Will. “Sure, investors want to see a vision and a business plan, but it’s all about the passion in startups. We have that — but we also have the savvy.”

While off-the-shelf models will likely be the bread and butter of sales, the custom market offers serious ski geeks the ability to fine tune a ski any way they want. Anderson will run through a list of questions with customers seeking that extra edge. Where do you ski? What type of terrain? What’s your style? The team is also looking to launch a new women-specific line of skis in the near future.

Anything is possible to give a customer the right tool for the right job. But the ski company is at a growth point where it needs investors to streamline production. Being undercapitalized becomes a problem if there is a big spike in sales, keeping quality control, being able to purchase quality material in large quantities.

In many ways, the last several years have been a large R&D effort — getting the skis onto skiers, going to events, giving away skis at movie premiers, solidifying the brand, tapping hard-core locals to put them to the real test and provide critical feedback.

“These kids ski at a very high level and are eager to give feedback in a constructive, honest way,” says Anderson. “They won’t sugar coat it. They understand the key concepts of a responsive ski and can eliminate themselves from the equation in the testing.”

Billy Marcial, 26, is one such kid who grew up in Whitefish and was a first team All-American freestyle skier at the College of Idaho outside Boise. He has won half pipe and slopestyle events around the country — and broke several early MSC models in half during the testing phase

“These days I can drop into waist deep powder and shred it up and switch to a different pair and hit 50-foot jumps — and they’ll perform,” says Marcial. “Even on fast groomer runs, their skis are very versatile. And it’s cool that it’s sustainable wood. Every single pair they make is better than the pair before. They have put so much time, energy and money into it. These guys have taken a hope and a dream and made it into a reality.”

Looking at the X’s and O’s, one huge play in the reality of the business plan is to bring the manufacturing to Whitefish. Their first step this fall will be opening an office and showroom in the core of the downtown business district, a short football toss from busy Central Avenue. Anderson feels confident that they are ready to take the next big steps as they look at warehouses and the process of relocating their mad scientist ski maker.

While the local skiers are their biggest and best sales team, a mention in a major ski magazine gear review sets the bar one notch higher. In the 2013 Gear Guide published by Backcountry Magazine in September, ski testers gave the “Skookoleel” model high marks.

The details are simple: Base models retail for around $850 and can be ready for delivery immediately or within two to three weeks, depending on supply. Semi-custom skis, built from the platform of the base model, but using the customer’s desired dimensions within three centimeters from tip to tail and under foot, will run around $950 and require three to four weeks for delivery. Skiers wanting a full custom ski will work with a ski engineer to design a mold; the cost will run around $1,550 with a two- to four-week delivery window.

Even the popular specialty ski shop in Whitefish is eyeballing these new powder tools. “We find it rewarding and inspiring to see a small, innovative company, produce quality domestically-made skis for the core skier in our own backyard in northwest Montana,” said Timmy Thomas, co-owner of The White Room. “As a grassroots ski shop in Whitefish, we feel privileged to witness the growth of companies like MSC for the betterment of our community and ski culture in general.”

With the first shades of winter already dusting the Whitefish Range, the Montana Ski Company has a lot on their shoulders — while at the same time working other jobs to pay the bills to finance a dream.

“The goal for the ski company is not to ever become really big, but I think we can have some fun, make a little money, and give people a killer product that has a little piece of Montana in every ski,” said Bledsoe, before pointing his “Soldiers” down the fall line last winter, dodging Douglas fir with quick turns

Ultimately, creating positive impacts on the community and the environment and having Montana Ski Company be a legacy of the future — passing down the passion of skiing on good-old-fashioned made in Montana skis — is the key. And hey, maybe they’ll even be able to make a little money along the way.

“We’re in this for the long haul,” says Wold. “We’re from here. We live with it. We picked the name of the company for a reason. Our skis come from the heart and soul of Montana. We have the luxury to do the right thing. You can do good while doing well.” 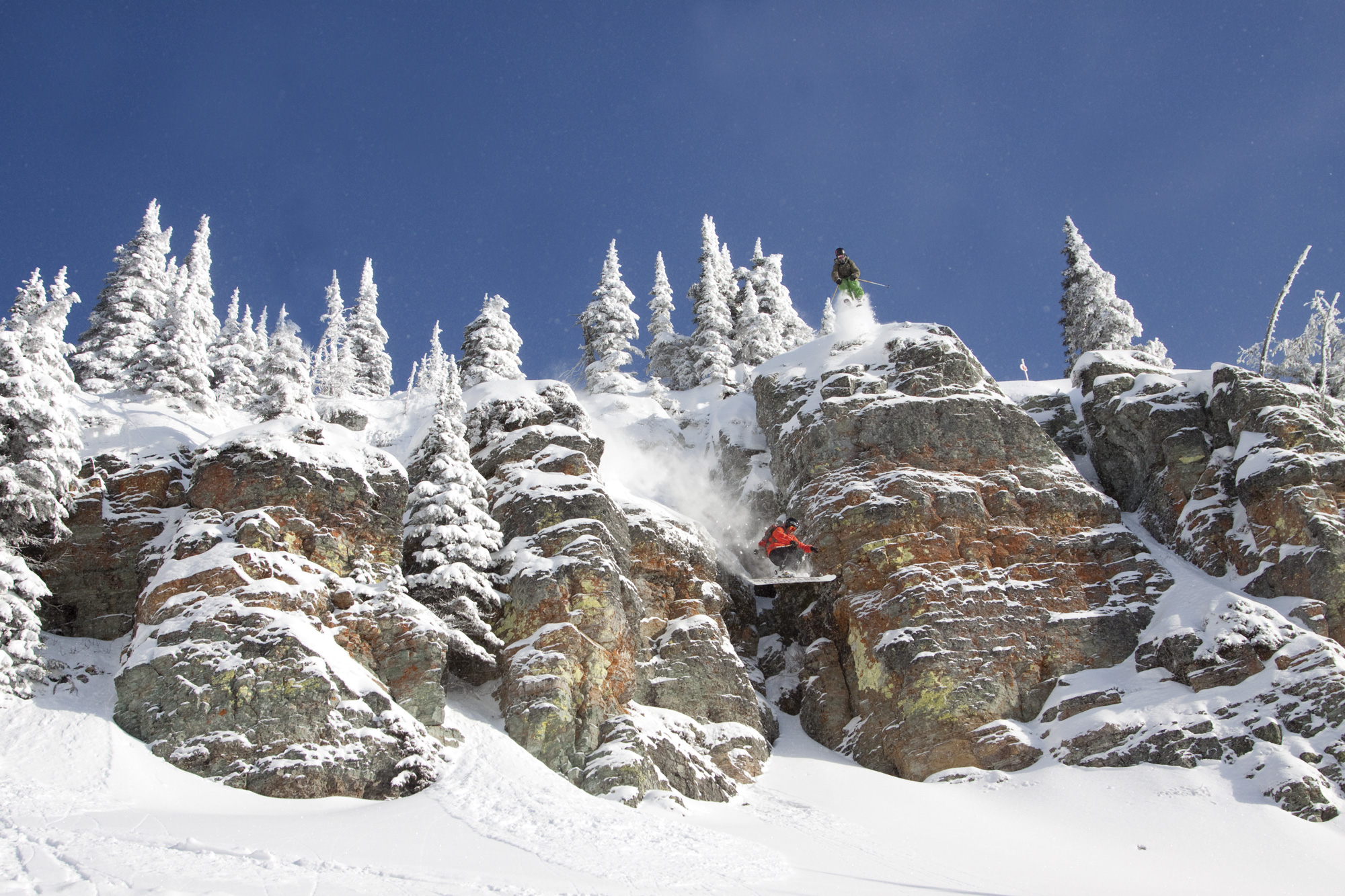 Montana Ski Company team rider Billy Marcial flies over Zak Anderson as the two air out the first ever double huck off Buckle Your Boots, a huge cliff found in bounds at Whitefish Mountain Resort in Whitefish, Mont. Marcial and Anderson are both skiing on Montana Ski Company skis in this cliff jump. 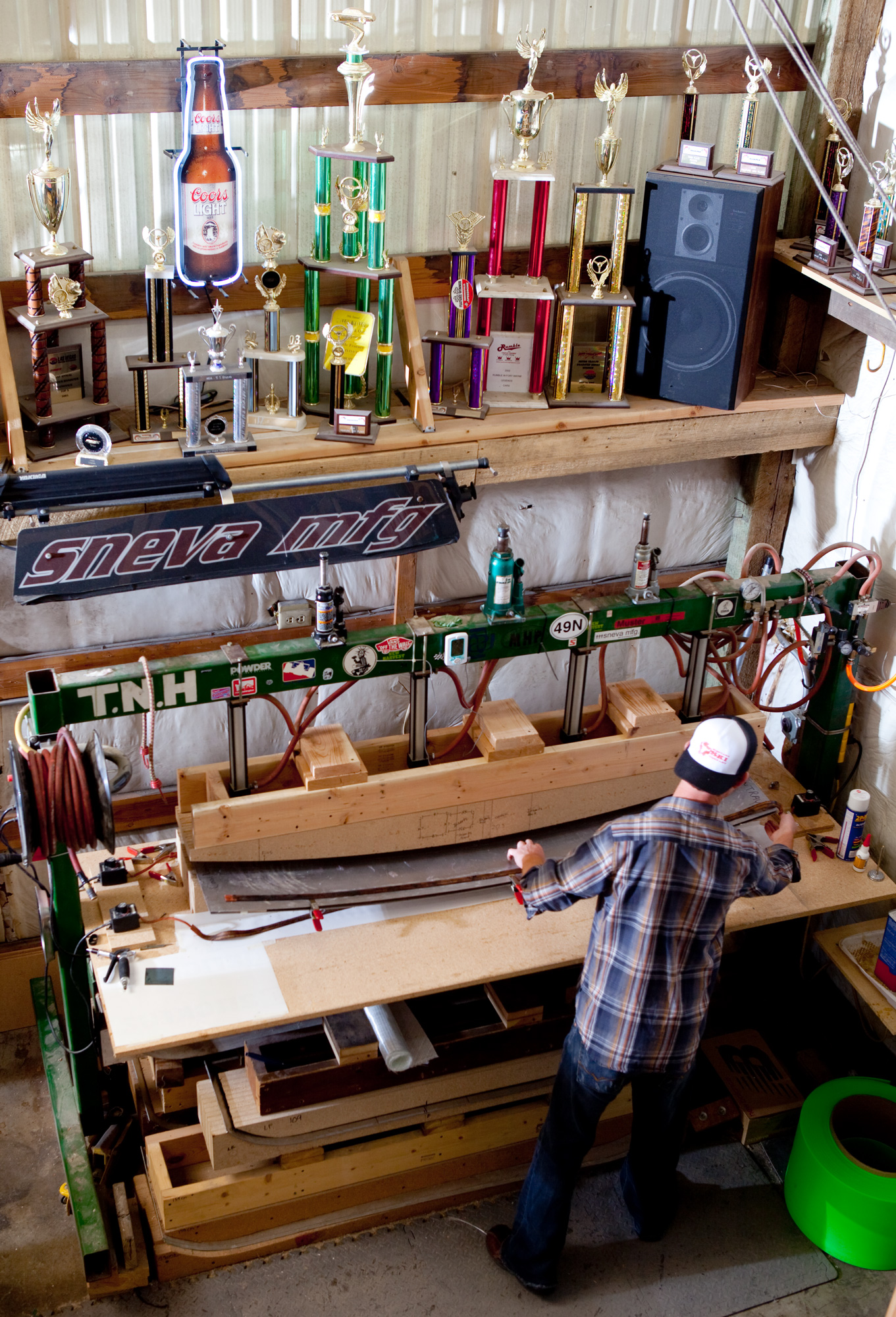 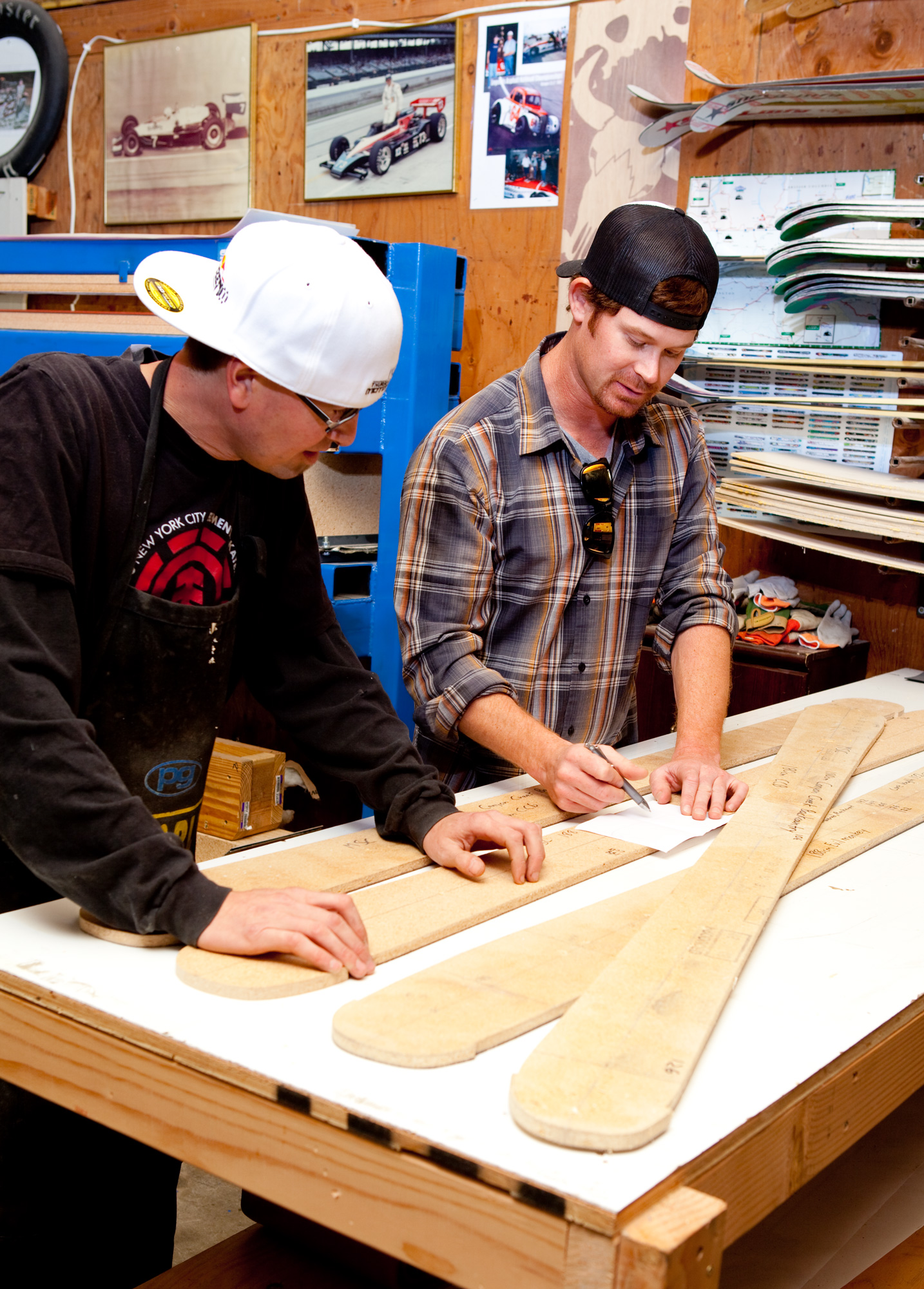 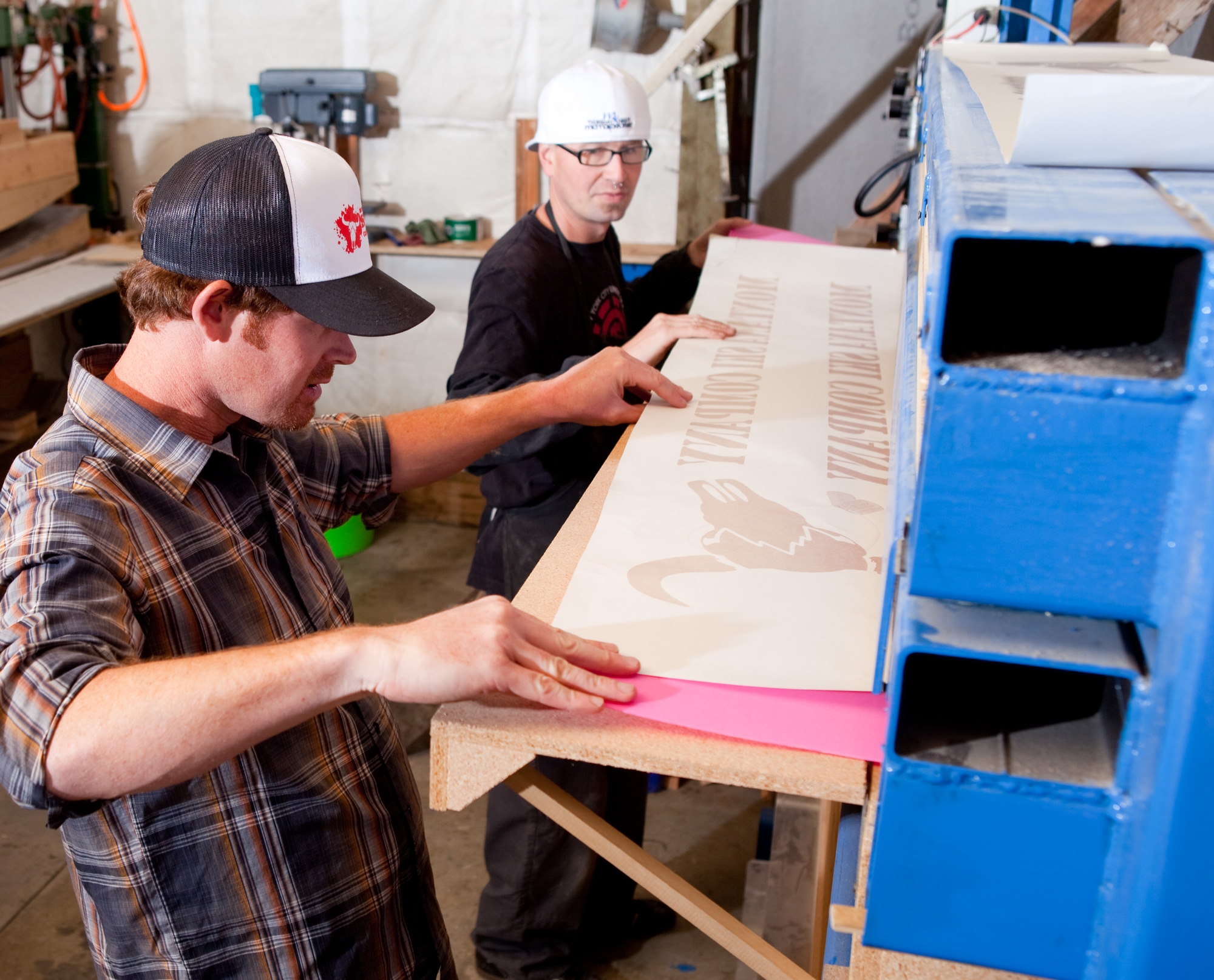 Zak Anderson, left, of Montana Ski Company, and TJ Sneva line up base material and graphics on the sublimation press. 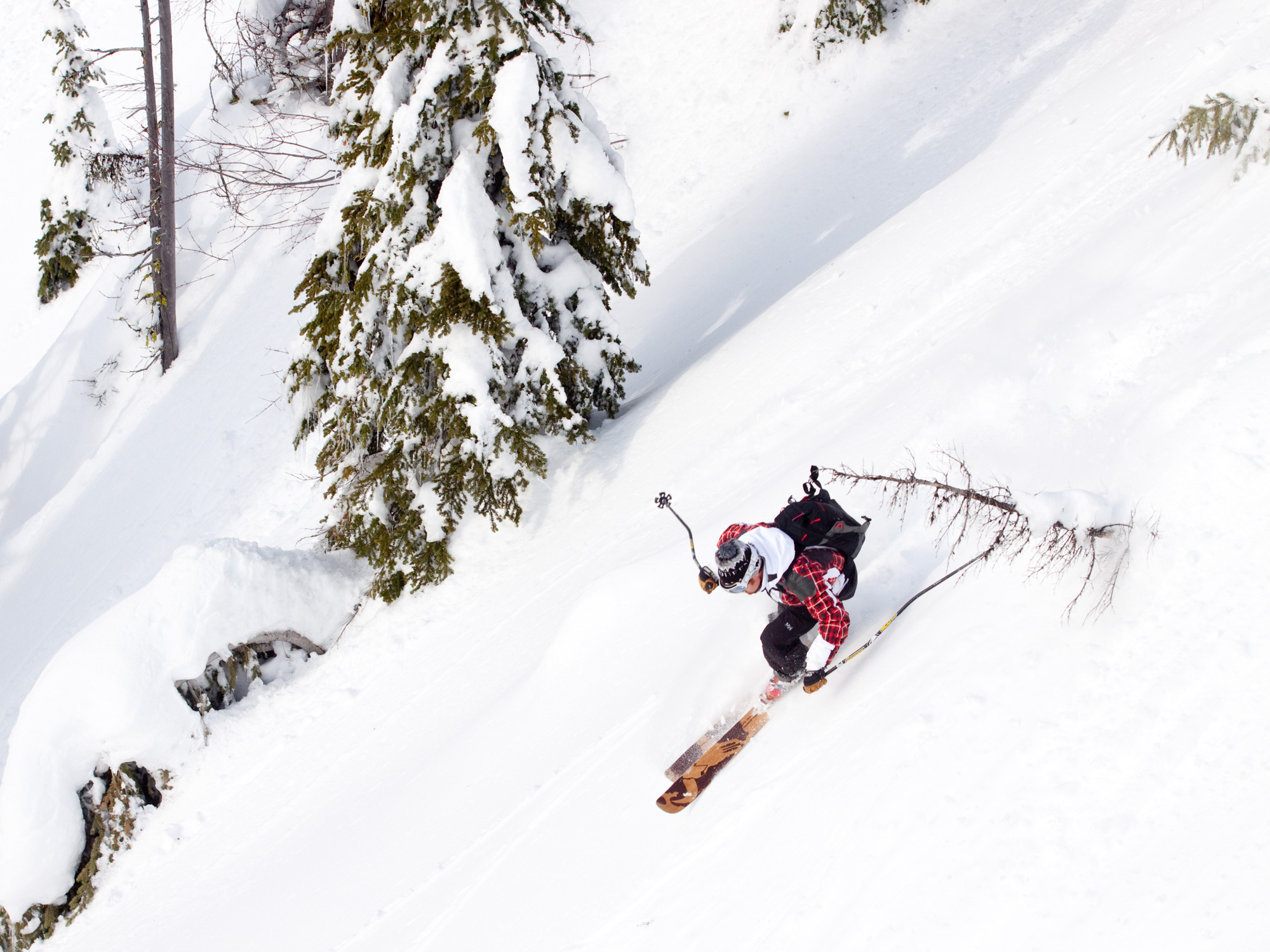