“USE YOUR FRINGE,” instructs Tahnee Lannae Peppenger at the Miss Southeastern Montana Rodeo Pageant (MSMR), as she gracefully raises her arms high in the air. Peppenger, a former runner up at Miss Rodeo Montana 2012, is demonstrating to contestants how to showcase western elegance attire for the Modeling and Appearance portion of the Miles City competition.

Montana Rodeo Queen (ages 19 to 23), Teen Queen (ages 15 to 18), Princess (ages 12 to 14) and Little Miss (age 8 to 11) pageants occur annually throughout Montana, and competing for a title isn’t all fringe and fun. Pageant criteria vary from county to county but at the MSMR event, the competition categories run the gamut from Horsemanship Pattern to Modeling and Appearance to Rodeo Impromptu Questions.

During the course of the competition, contestants are required to do everything from a Flag Run (circling the arena on horseback at a lope, controlling the horse with one hand and a large flag with the other) to the delivery of a self-written speech about an issue relevant to Montana, to answering impromptu questions such as: Who was Montana’s first rodeo queen? When does the male horse develop tush teeth?

At the end of the day, the young lady with the highest composite score for her age group earns the respective title. The new “royalty” is often, but not always, crowned at a rodeo after making a grand entrance. During their one-year reign, pageant winners are required to make two to three “visiting royalty” appearances (the number of required visits varies from county to county) at a rodeo, banquet or community event.

For some girls competing in a pageant is a passing whim akin to a season of soccer or a semester in band. For others it’s an “all-the-time extracurricular,” as MSMR Business Manager Diane Rainey puts it. Some of the girls who pursue pageantry with gusto have been working with horses since “they were knee-high and able to walk,” says Rainey. It’s not uncommon for girls to move up the ladder, from Little Miss to Princess, Teen Queen and Queen. A few aspire to win the state title, Miss Rodeo Montana, and finally the national title, Miss Rodeo USA.

Horsemanship is without a doubt a physical endeavor. It should come as no surprise, then, that some girls are reduced to tears after training stints that follow long days of school and other activities. The simple logistics of carting a horse from place to place rivals the rigors of the most cumbersome sport. The role of the pageant parent cannot be underestimated: “I had to learn how to drive a trailer. I hadn’t done that before,” says Carrie Kraus, mother of Miss Southwestern Montana Rodeo 2013 Queen Katie Kraus. “If she [Katie] didn’t have me, it just wouldn’t happen.”

When it is all happening, when the royalty make a grand entrance to an enthusiastic rodeo crowd, when each tiara-clad title-holder takes a Buzz Run (a fast lap on horseback around the arena while cheerfully waving) in a blur of sparkles and fringe, it all looks so effortless — and fun! It’s hard to imagine one of these glamorous contestants bending low to the ground, laboriously scraping mud out of her horse’s hoofs.

By definition, a pageant is an “elaborate display or ceremony.” Montana’s royalty pageants are certainly that, thanks to a lot of sweat, toil, practice, dirt and muscle. 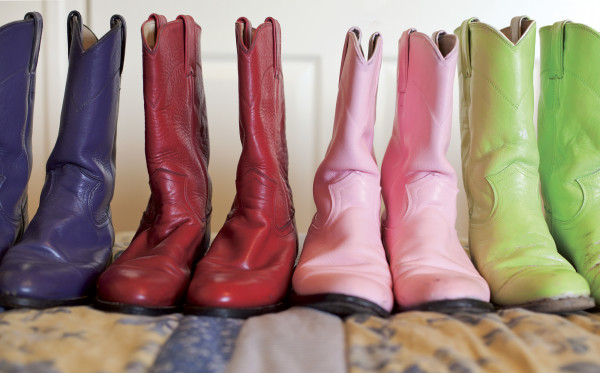 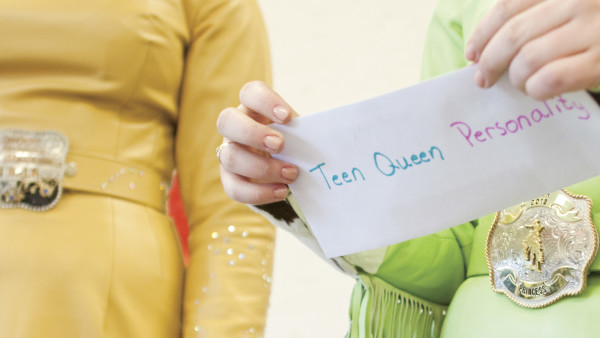 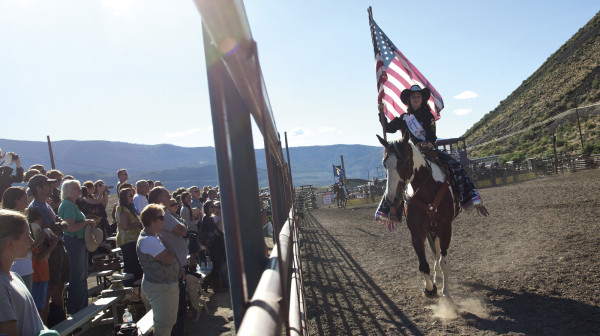 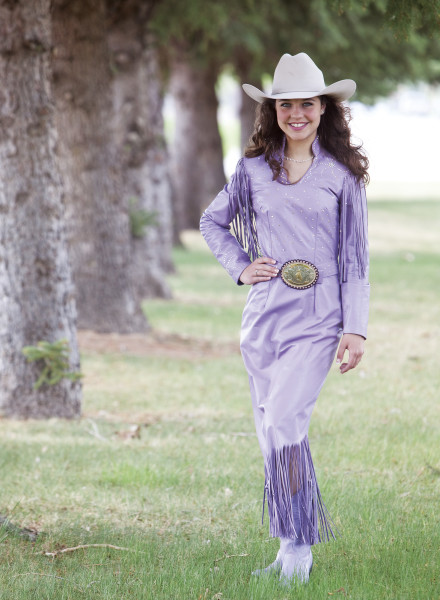 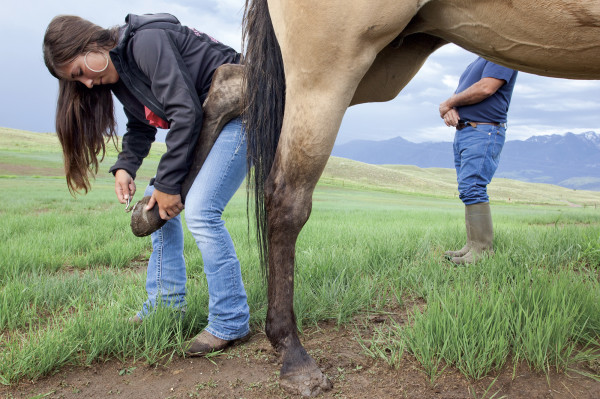 2013 Miss Southwestern Montana Junior Queen Stephanie D’Angelo scrapes mud out of her horse’s hoofs during a training session with her father at the family’s Livingston, Montana, property. Photo by Janie Osborne 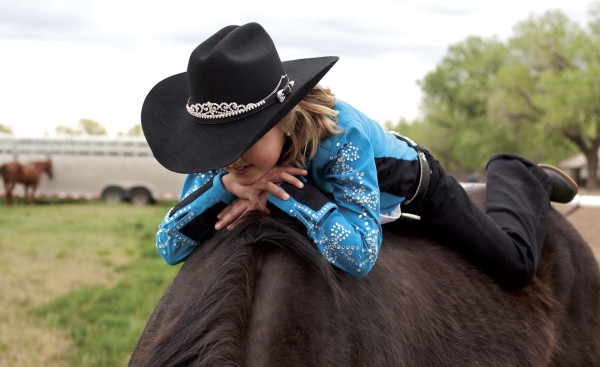 Miss Southeastern Montana Little Miss Haylee Witkowski, age 9, relaxes on her horse at the end of the pageant day outside of the 2013 Miles City Bucking Horse Sale. Photo by Janie Osborne 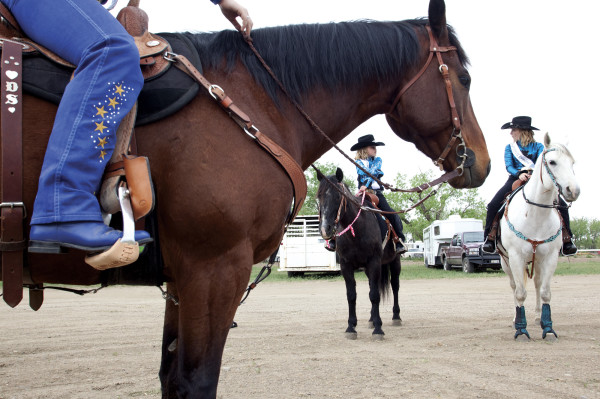 Near the gates of the 2013 Miles City Bucking Horse Sale, the reigning royalty chat among themselves. Photo by Janie Osborne 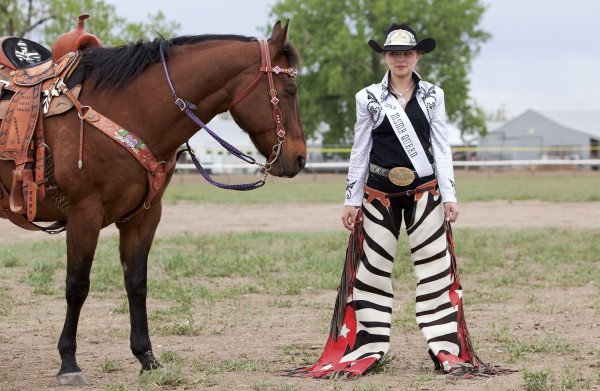 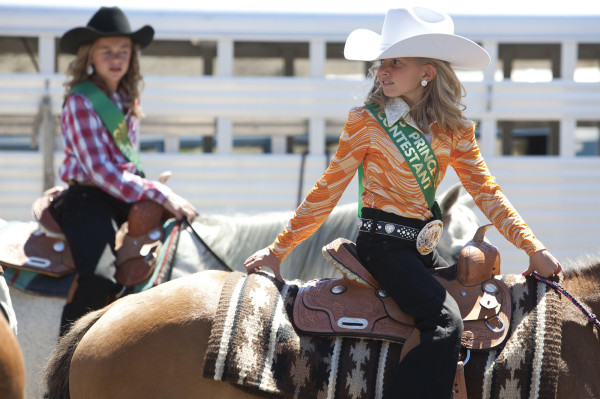 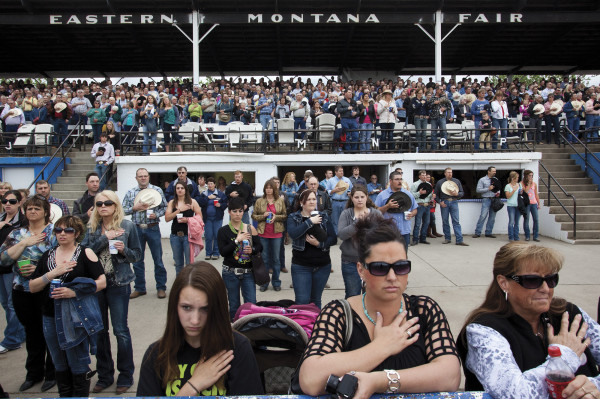 The audience at the 2013 Miles City Bucking Horse Sale recite the Pledge of Allegiance at the onset of the popular event. Photo by Janie Osborne