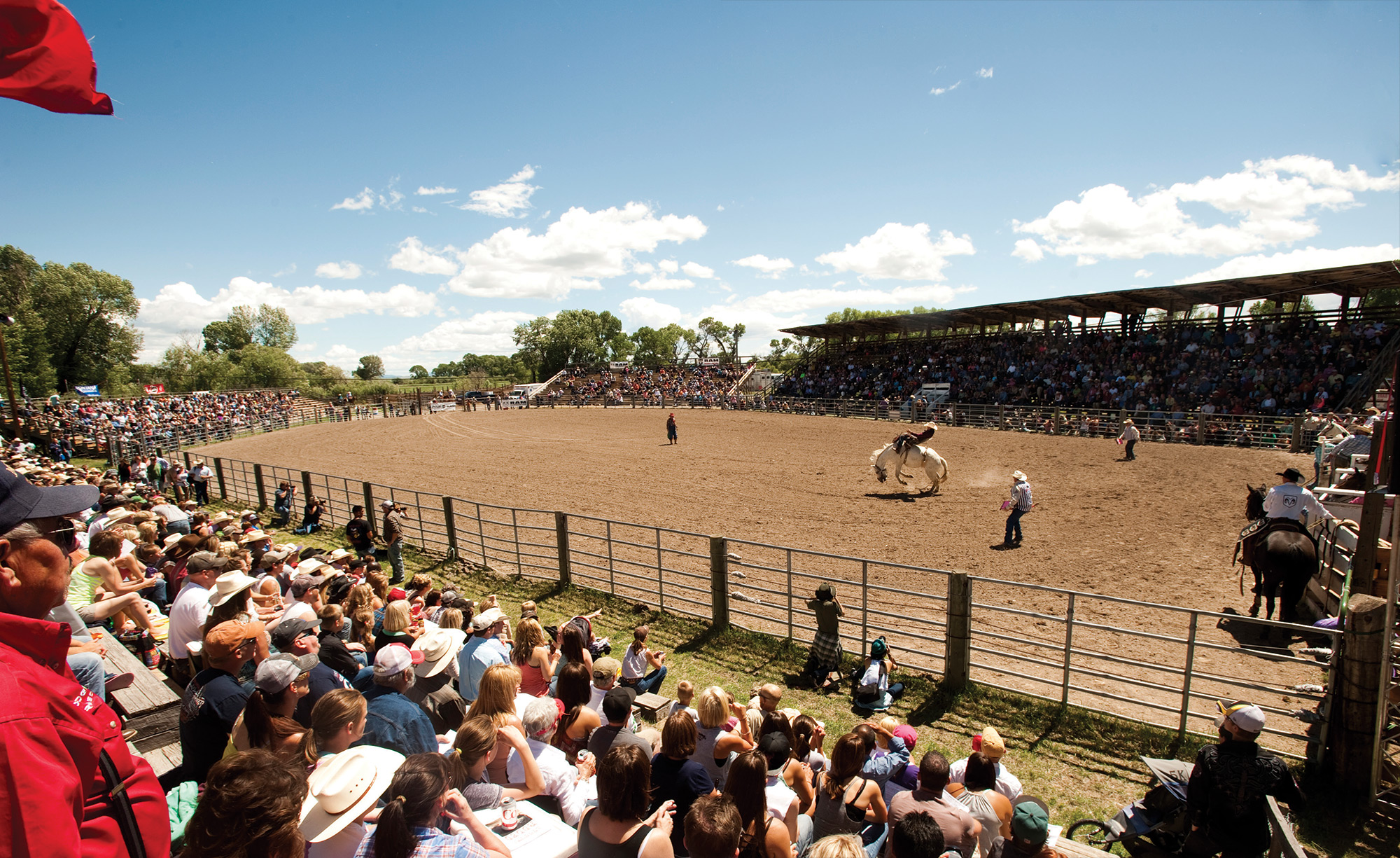 IF YOU HAPPENED TO STUMBLE INTO AUGUSTA, MONTANA, the last weekend in June, and were unversed about the local culture, you’d experience the day when this town of just over 300 souls swells to twice that size during the state’s largest one-day rodeo.

Now in its 79th year, the Augusta Rodeo draws top talent from Montana, the surrounding states and Canada. “This is the crème-de-la-crème of rodeo events,” proclaims Dwayne Nelson, local American Legion organizer.

On a Sunday in June, the best rodeo performers in the region compete for bragging rights and points in individual events like bull riding, team roping and barrel racing. It’s sanctioned by the Professional Rodeo Cowboys Association, the mother ship of the rodeo world. Think the NCAA of cowboy sports.

It’s beyond dispute that rodeos are patriotic affairs. Gleaming American-built Dodge pickup trucks dominate the pre-rodeo events. They circle the arena as powerful statements to America’s industry and might. One year a Kubota tractor was the official grounds prep vehicle. “We got that straightened out,” observed one rodeo organizer. The next year, a John Deere tractor was pulling the dirt rake.
The display of American and state flags evokes an upwelling of pride, as pretty cowgirls atop their show horses lope around the arena, the colorful flags billowing behind them. American patriotism fills the grandstands. Then there is the invocation. Hundreds of cowboy hats and ball caps come off and silence sweeps over the rodeo grounds as a minister breathes blessings into the microphone, praising our troops, our government and our country, invoking peace. The announcer takes over and, in a rising, booming voice, declares the opening: “Welcome to the Augusta, Montana, RODEOOOOO!”

Rodeo announcers are the glue of the day. Professionals travel the summer circuit like the rodeo performers, often driving through the night to arrive at the next town on the circuit. Announcers keep the pace, sustain the frenzy, plug the sponsors and banter with the clowns. “And out of the Sun Canyon Lodge chute is a top rider from Cody, Wyoming, riding Missile Machine.” “No time for that cowboy!” the announcer calls out as another sullen rider knocks the dust of his fallen hat and stalks away from a maddened bull. “Let’s have a big hand for that cowboy …”

Between events, the announcer and rodeo clown exchange choreographed and decidedly hokey jokes. Knock-knock jokes are standard fare. They keep the event clicking on pace. When the arena is raked and the riders and ropers and barrel racers return for the next event, the announcer showcases the names of competitors, the towns they hail from, and their times. The crowd goes wild.
Traversing the main street of Augusta in the old days of the rodeo was a true walk on the wild side. Old timers recall the cinder block “jail” packed as tight as sardines with drunks and brawlers. One by one, partiers were led to temporary incarceration for various publicly-intoxicated violations. In the days following the rodeo, front-end loaders started at one end of the street and ended at the entrance to town, shoveling thousands of empty beer containers into piles to load in dump trucks.

The event has mellowed since the American Legion took over the management of the weekend, seeking to rid the town and the rodeo of its increasingly bawdy reputation. The Legion is responsible, as well, for the patriotic theme as it strives to infuse a more family-friendly tone to a notoriously boisterous weekend.

Still, a good old-fashioned fight is the predictable outcome when beer-fueled cowboys and cowgirls gather. Paired Lewis and Clark County sheriff’s deputies mix in with the street crowds and murmur into their radios to other patrol staff whenever they observe trouble arising. “Truth is, it’s not as bad as it used to be,” observed one officer from Helena, who stepped up for the overtime duty to staff the weekend event. “I remember my dad saying this is the one place and one weekend that you don’t want to be if you wanted to be safe.”

Locals look to the weekend as the mother lode of commerce. For local business owners, it can be the one event of the year that determines solvency. Revelers imbibe alcohol by the gallons and tavern owners (all three of them) place their inventory orders months in advance. Others, from seasonal street vendors of chili, cowboy hats and pork-on-a-stick, to resident storeowners, rely on the revenue to pace them through the rest of the year.

Augusta’s history is tied to ranching, so it makes sense that the tradition of rodeo — originally the cowhand’s dalliance that has been honed into professional competition — should pervade. While its roots remain with the cowboys, Augusta’s location at the convergence of Montana highways 21, 435 and 287, which collide here at four stop signs, is what has kept it on the map. From that, the community of Augusta emerged.

Augusta is the quintessential crossroads town. It was once in competition with nearby Gilman to be the central hub of early front-range agricultural development. Each was the classic supply town, both hoping for prosperity and supremacy during Montana’s town development period. Gilman eventually vanished, bypassed by the railroad spur line and outpaced by emerging Augusta, which by 1928, according to the Montana Almanac, boasted 1,000 souls.

All across Montana, small towns are dying. They are the eroding remnants of the homesteading era, a time when competing towns vied for the right to be the county seat. Into the 1920s, large eastern Montana counties divided and then subdivided, creating an urgent boom of aspiring towns hoping to emerge as victors in the great Montana town growth spurt. Some persisted. Most disappeared. Places that are no longer places — Garneille, Ubet, Maiden, Simpson, Gilman and hundreds of others — once dotted the state’s map. That Augusta survived at all is a consequence of location and luck. Pinned against the cottonwood-lined banks of Elk Creek, the tiny town never became a county seat, but it did have the fortune of being the only strategic crossroads within a 25-mile radius that retained a post office, country store, school and gas station.

The truth is, Augusta stirs a longing for small-town life, where things are pretty quiet for all but the one-day-a-year event featuring insanely large farm animals. There’s the tiny high school and associated events linked to the community’s sports team (in this case, the Augusta Elks). There are two churches, three bars, a new community swimming pool and a small automotive shop (the only place to buy fuel). There’s no mayor, city council or police force. Mostly, Augusta is a convenient jumping-off place for entering the front range of the Rockies, the doorstep to the Bob Marshall Wilderness. Just 20 miles to the west, the tree-darkened mountains rise abruptly from the foothills like majestic spires, uplifted for all to admire.

Tourists and backcountry enthusiasts move through the town with an easy rhythm that establishes this crossroads as a launching pad for outdoor adventure. During the fall big game season, Augusta is abuzz with hunters and outfitters arriving and departing; the iconic Buckhorn Bar is crammed with countless antlers from animals that did not get out of their way.

But at heart, Augusta has always been a cowboy town. Sleepy though it is most of the year, it still awakens to the nostalgic call of a good rodeo. On that last Sunday in June, cowboys, cowgirls and large animals mingle in the dust. And the crowd goes wild. 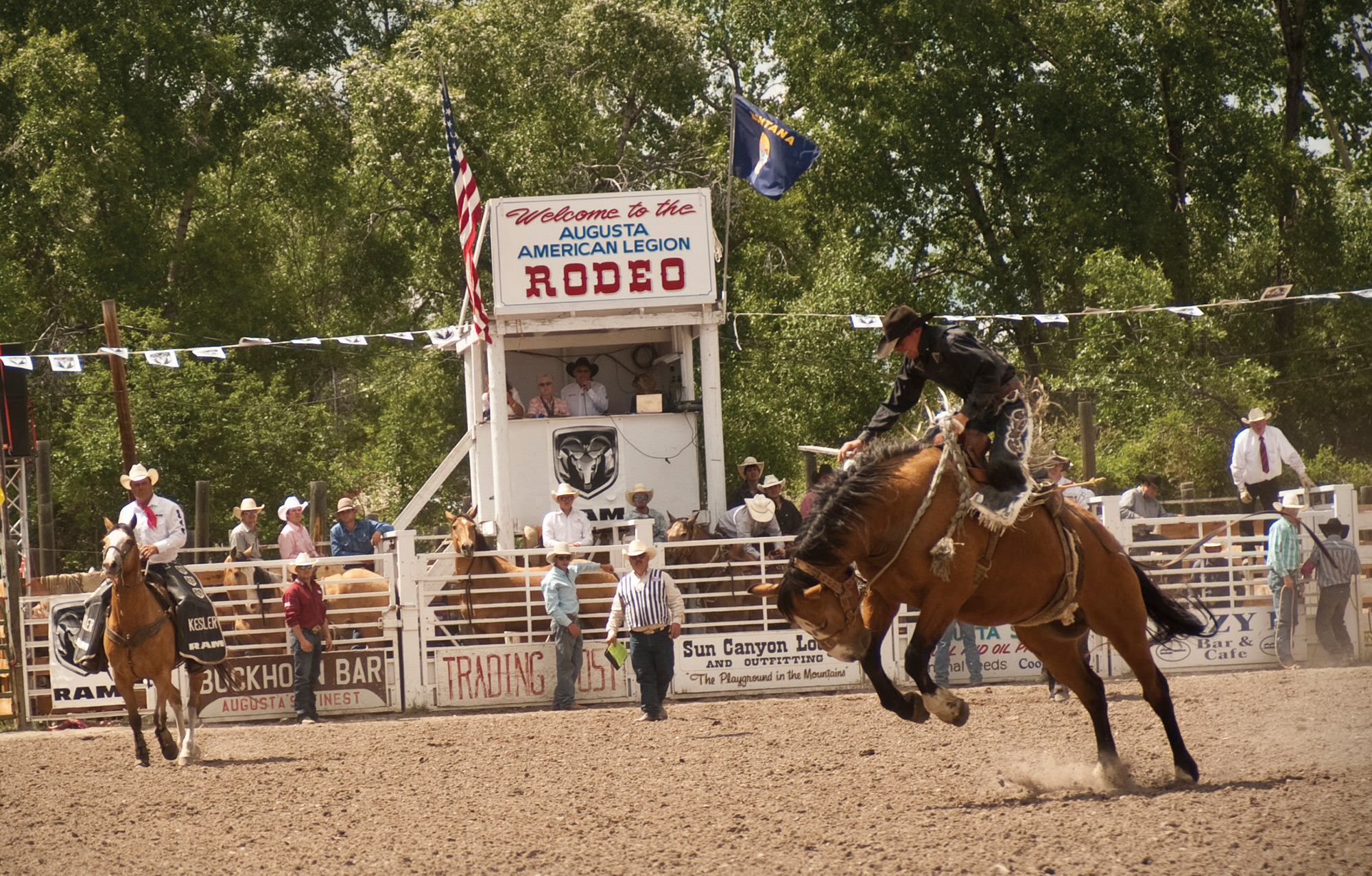 Saddle bronc riding at the American Legion Fairgrounds in Augusta. 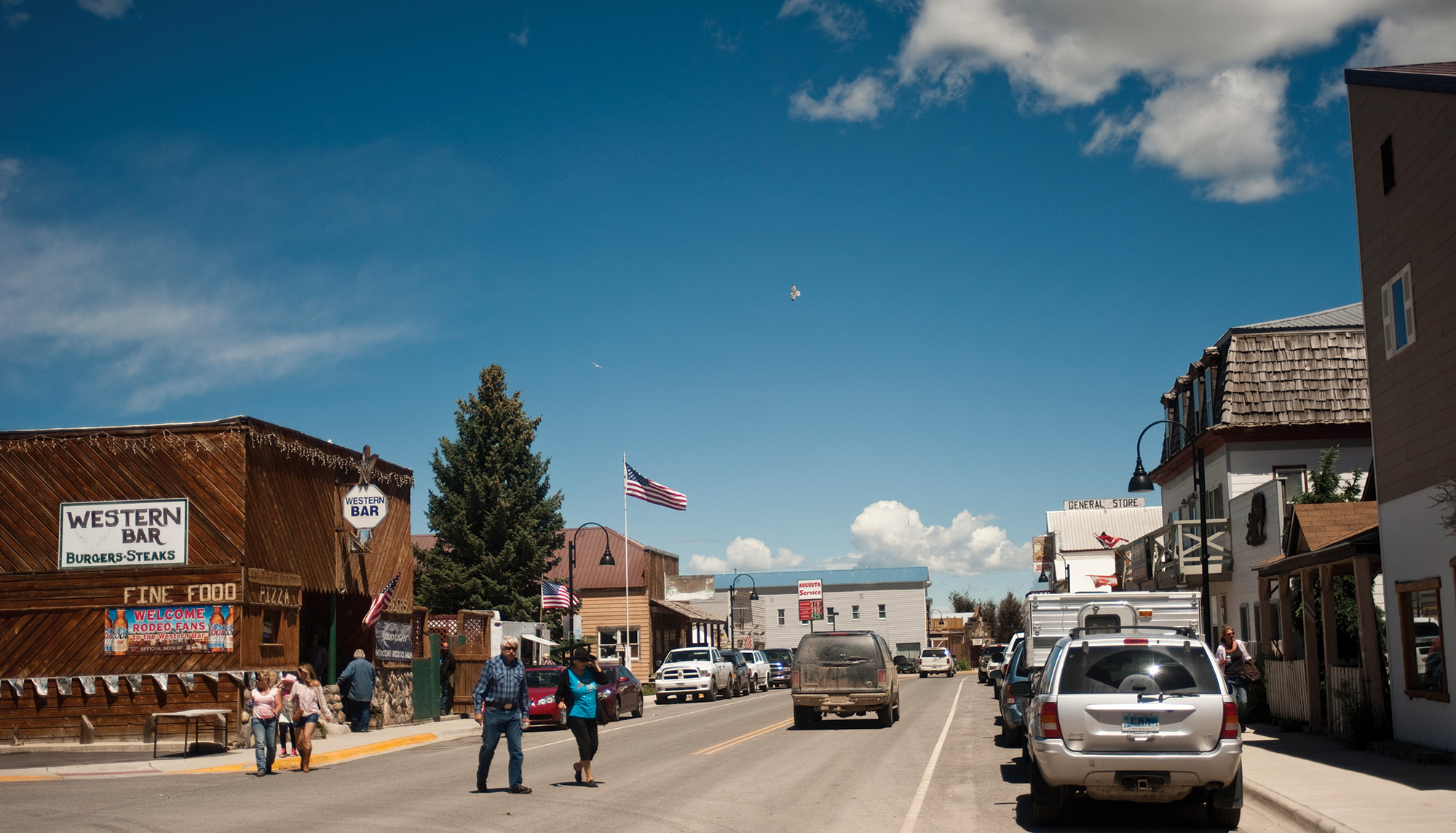 Stragglers to the rodeo’s opening ceremonies cross Main Street en route to the rodeo gate — located just one block away — in downtown Augusta. 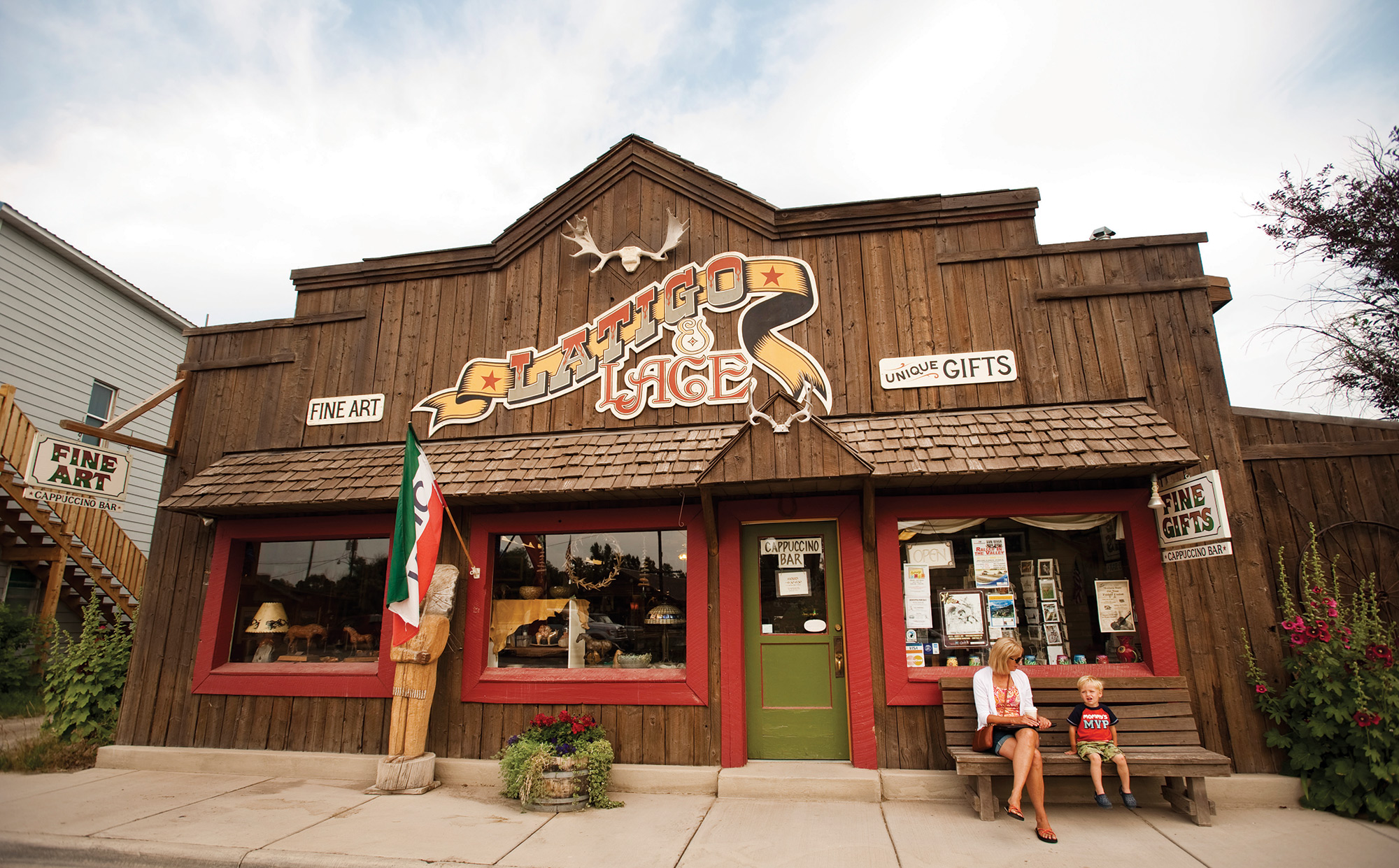 A very popular Main Street Augusta business, Latigo & Lace, sells art and has a cappucciono bar in the back. 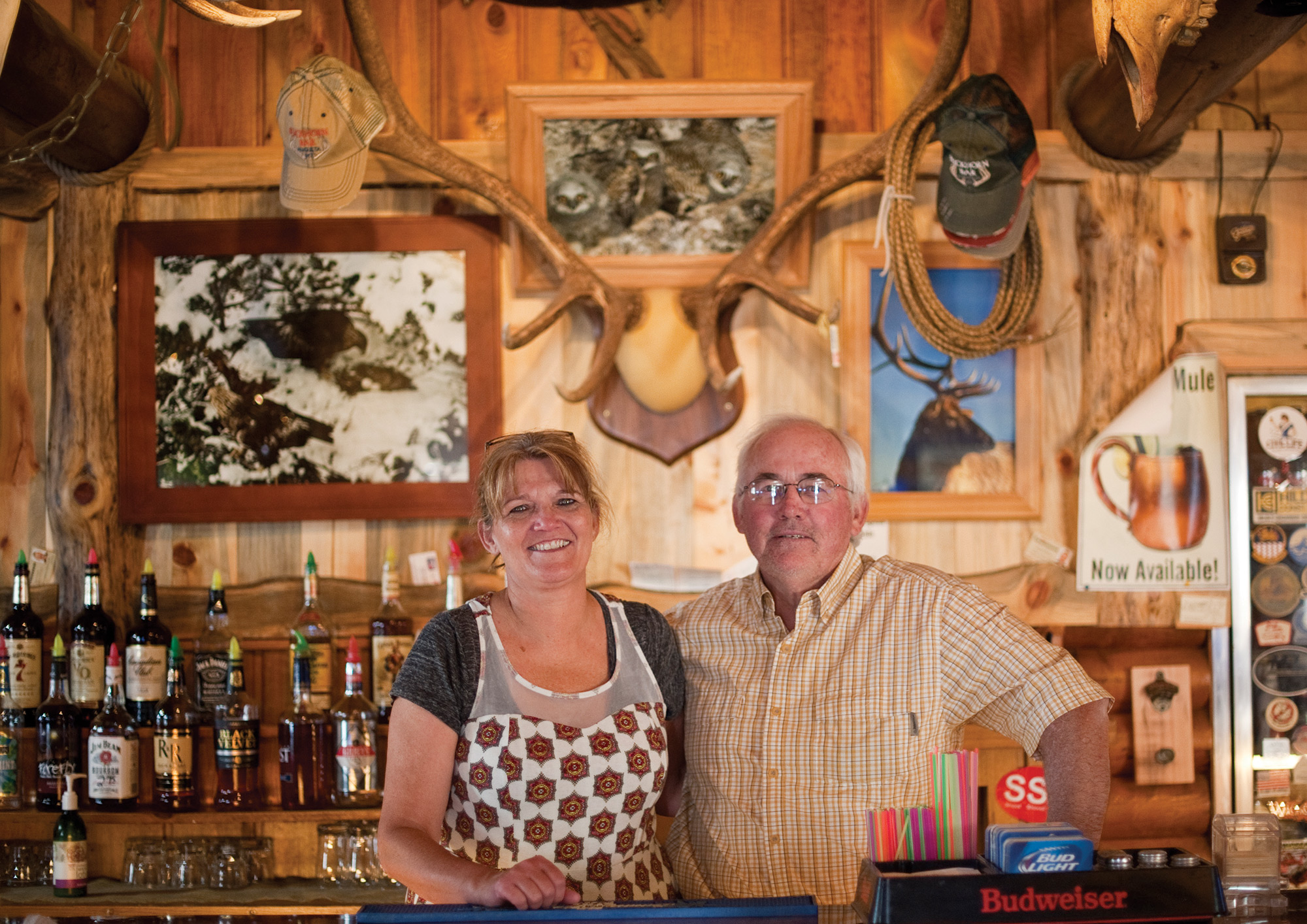 Buckhorn Bar proprietors, Tammy and Frank Dellwo, pose behind the bar. It’s fun to test your knowledge of the local wildlife and try to name all the impressive mounts on the wall over a delicious burger here. 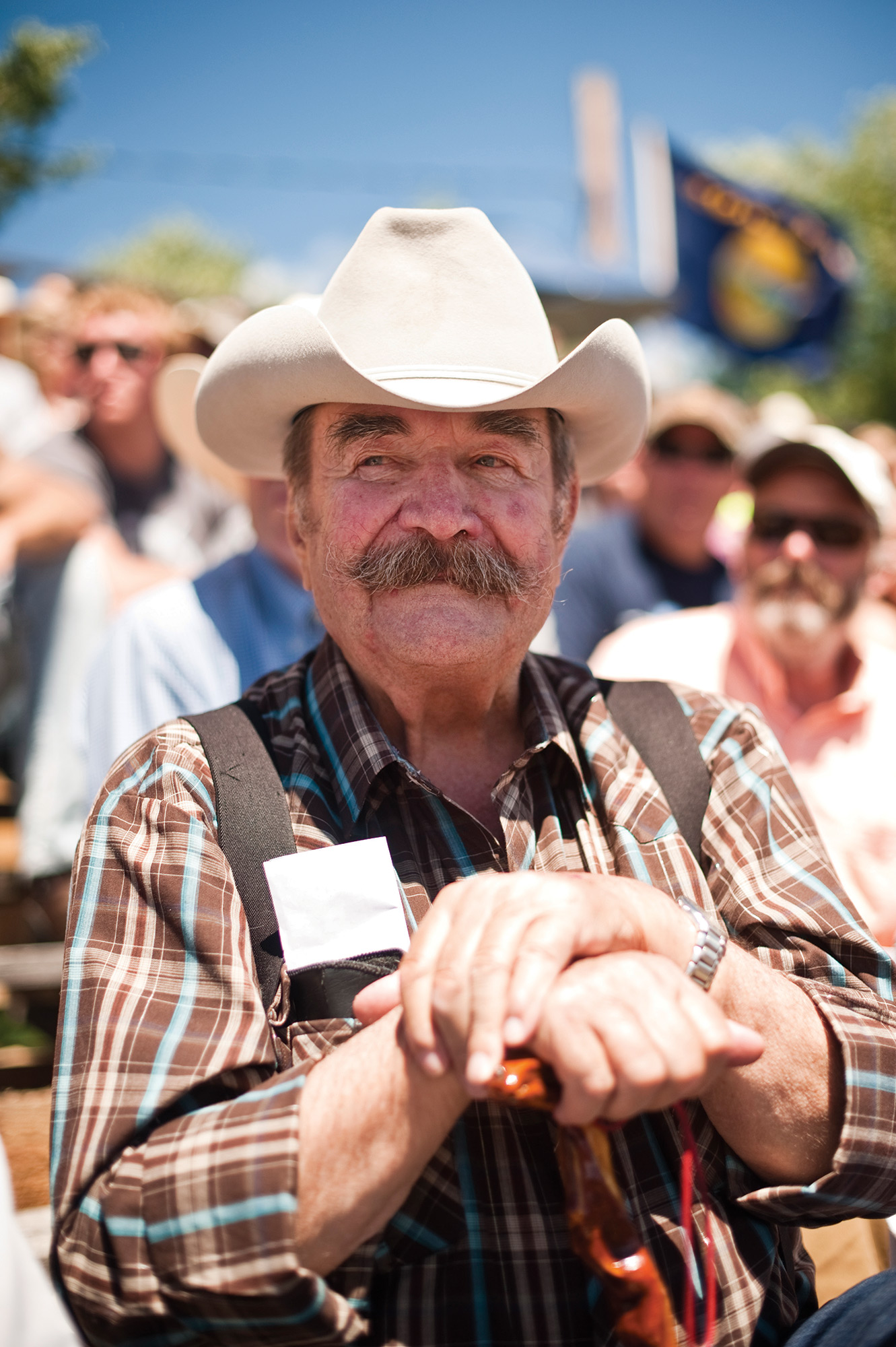 A Sun River resident tentatively watches the action in the arena. 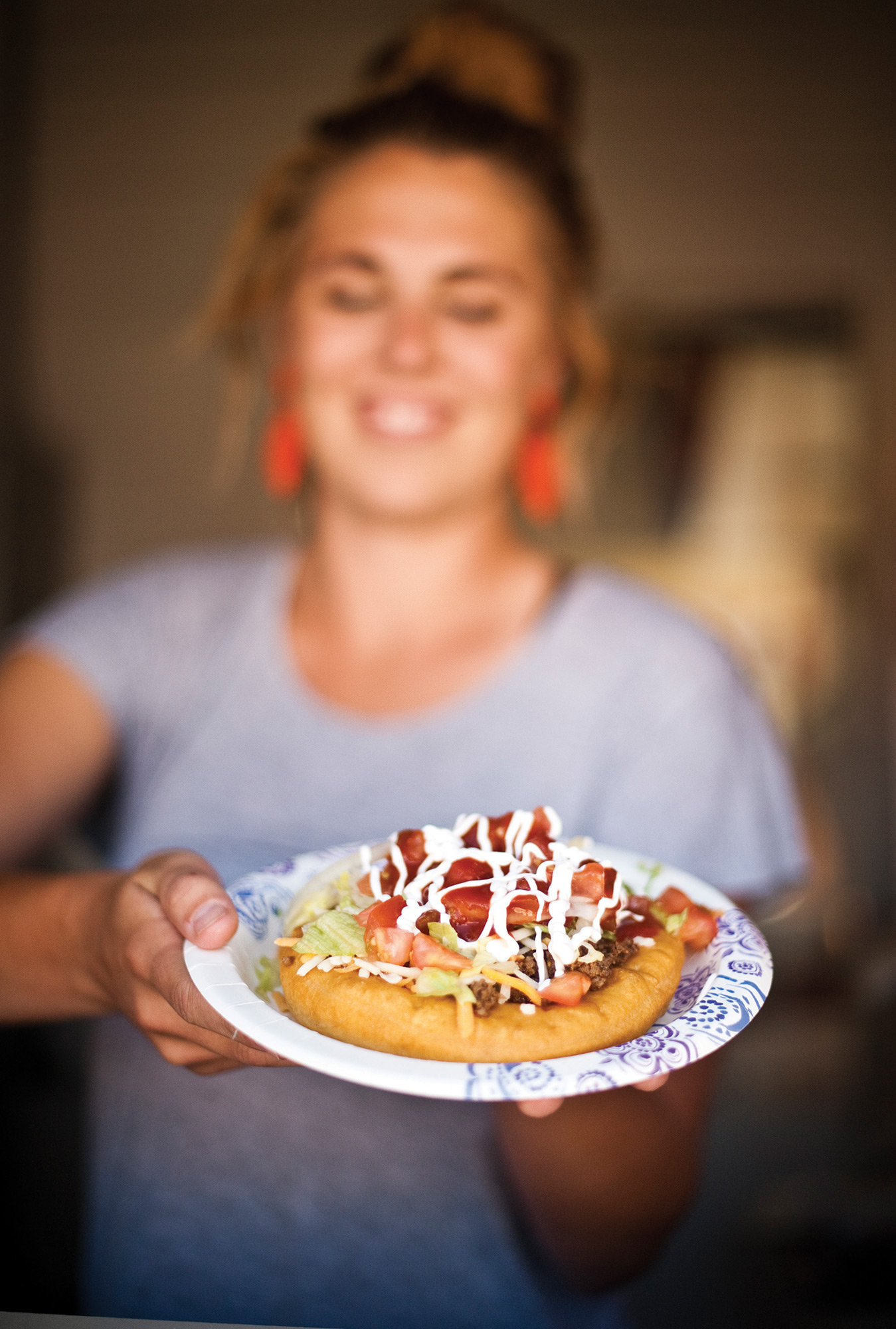 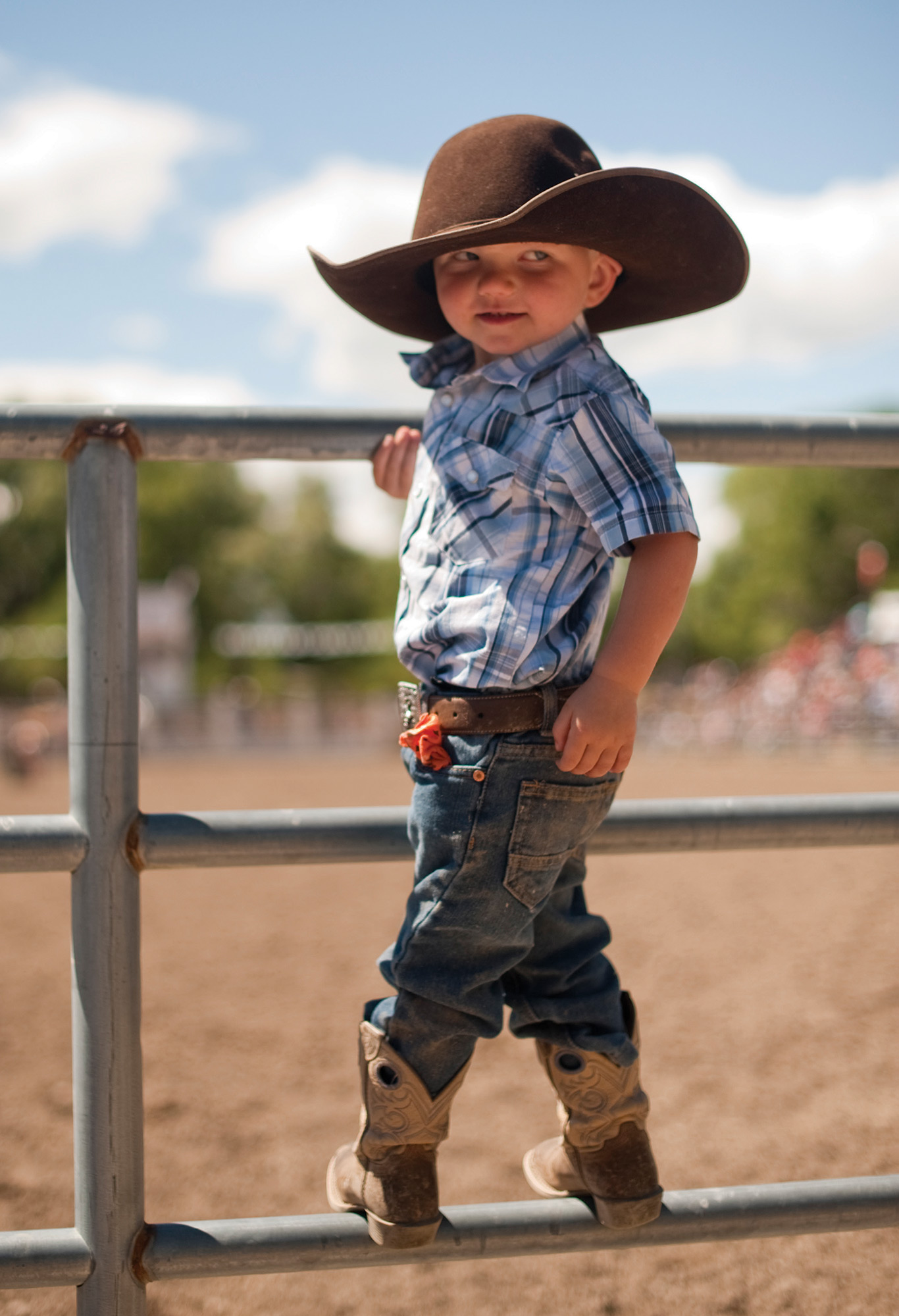 A little cowboy climbs the gate angling for a better view. 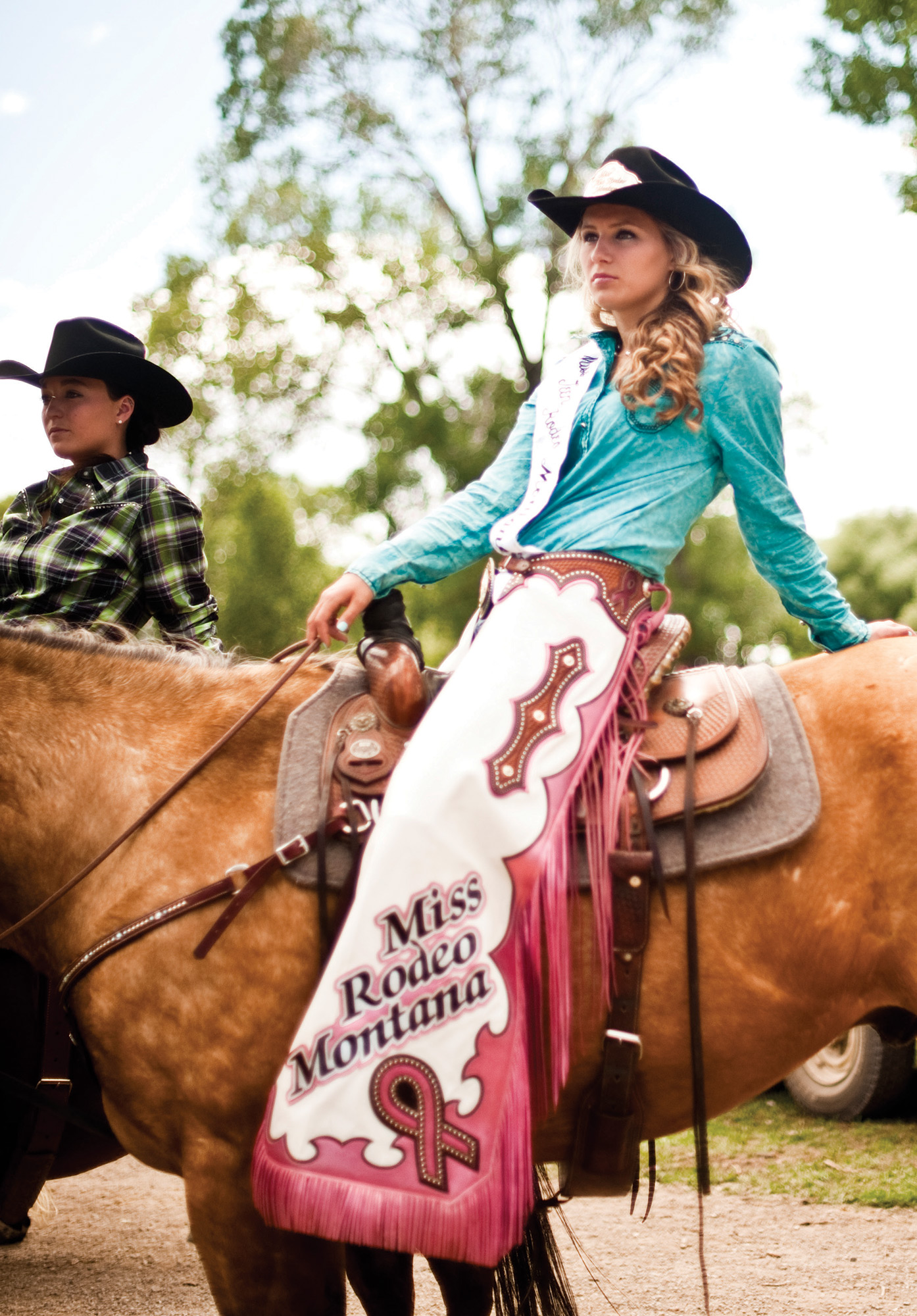 Miss Rodeo Montana 2013, Alyson Grinestaff of Bozeman, watches the action near the grandstands after riding around the arena at full speed, waving to the crowd. 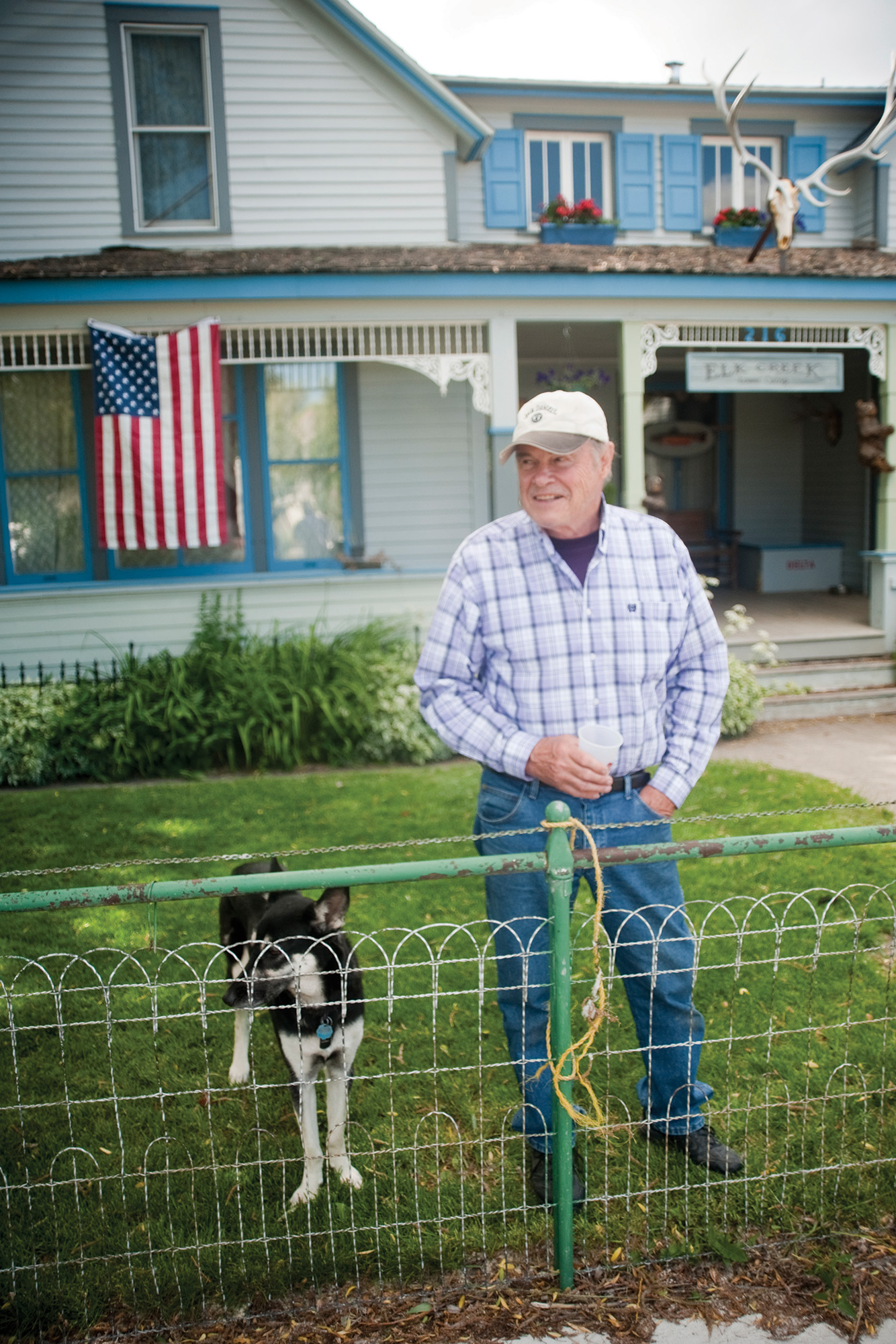 Dwanyne Nelson watching pedestrians buzz back and forth on Main Street. 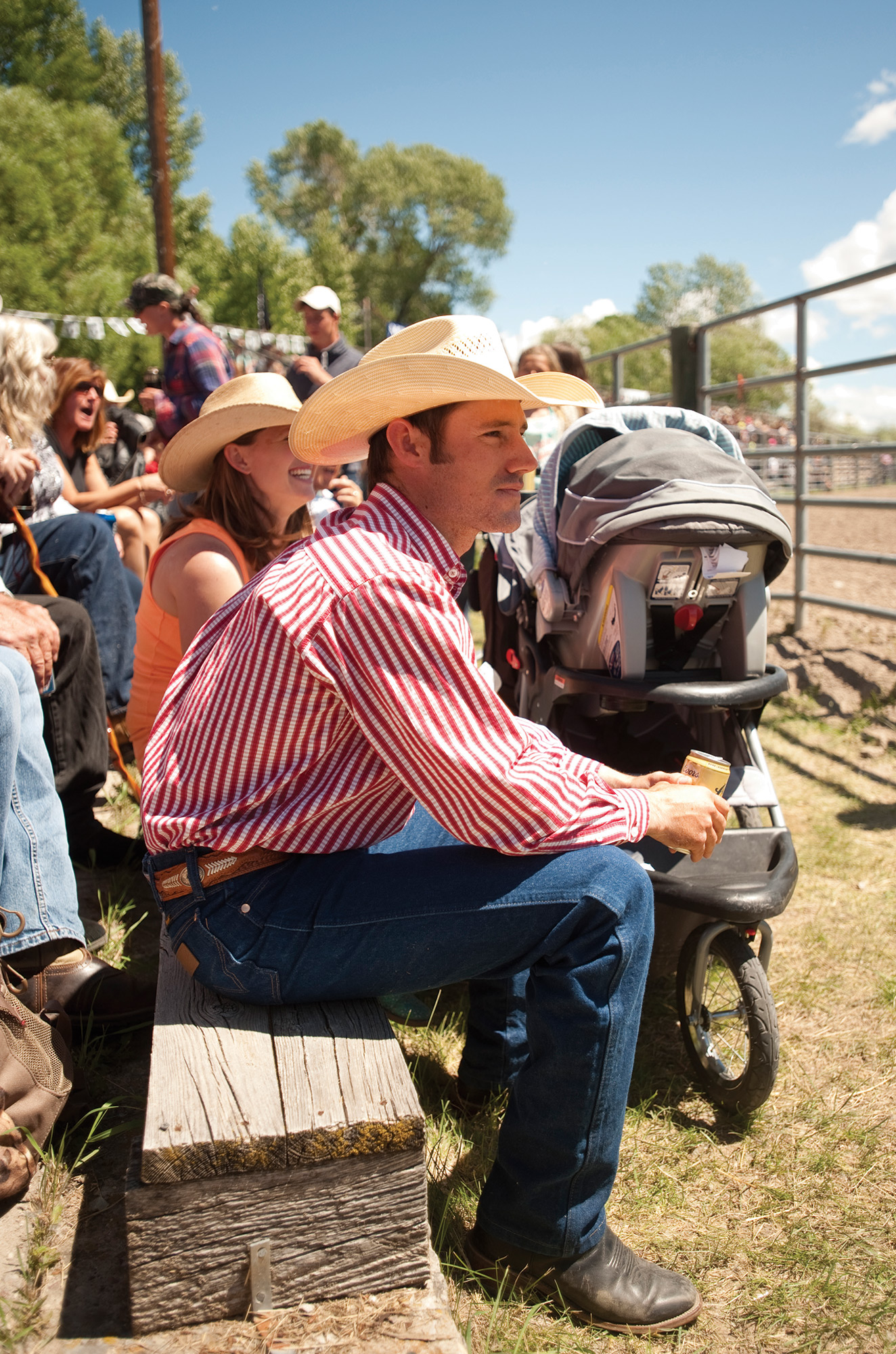 In the grandstands there’s no shortage of cowboys wearing crisp shirts — Coors in hand — with a stroller parked nearby. 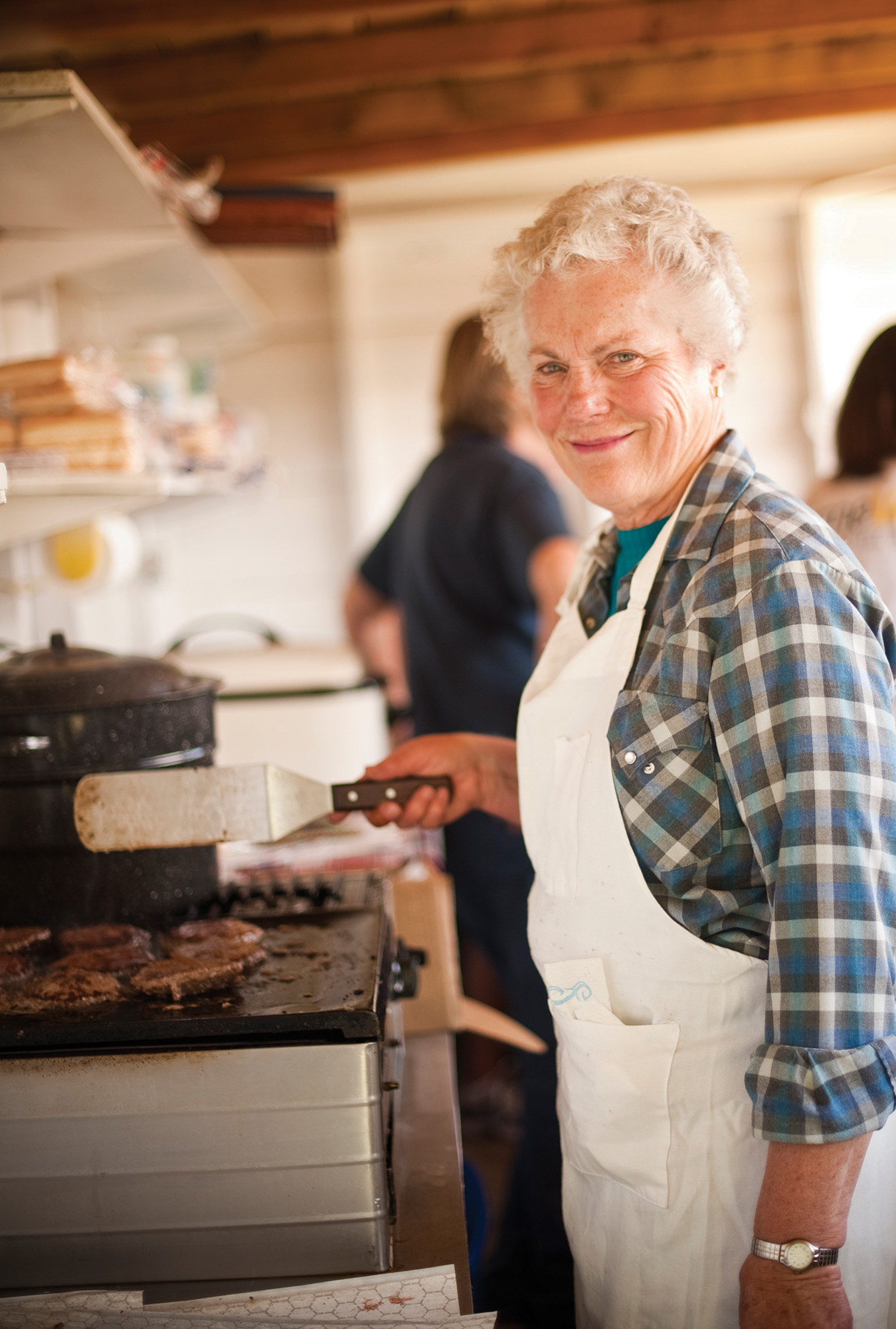 Shirley Artz frying up burgers in the rodeo’s concession stand.