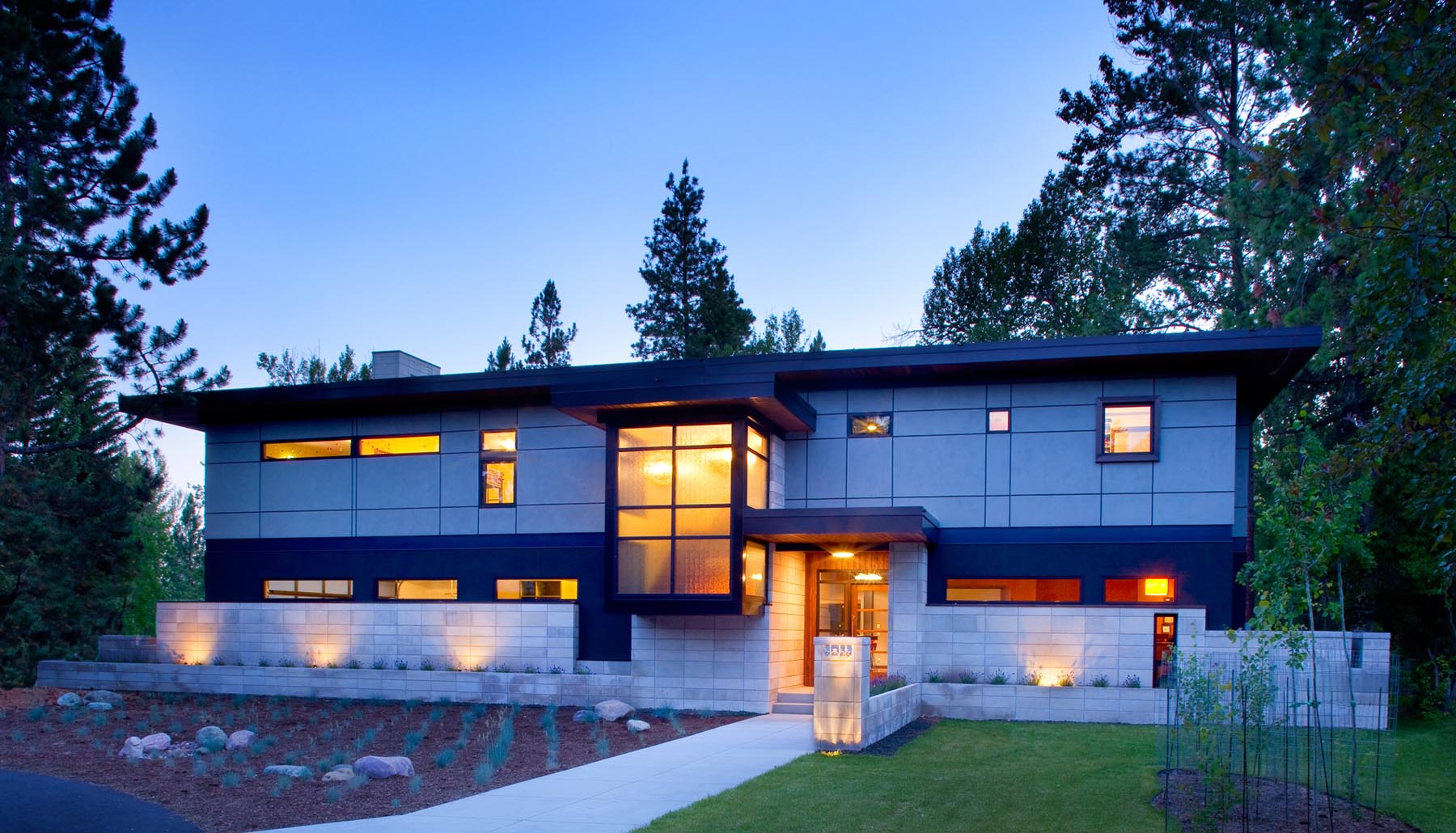 IN MISSOULA’S RATTLESNAKE VALLEY, tucked away on a quiet residential street, is a gem of modern architecture. Replete with metal and granite, right angles and bold colors, it’s a home that doesn’t pull its punches; unlike many structures that merely borrow ideas from contemporary design, this home remained true to that Modern vision from beginning to end. “When we met the architect, the first thing we said was that we wanted a truly contemporary home. We didn’t want to stray from or soften that idea at all,” says the owner. The result is one that is both austere and playful, beautiful and utilitarian. And, it’s unlike just about anything else you’ll find in Montana.

Despite its limestone and steel exterior and decidedly unique style, this home is not ostentatious, nor does it overpower its neighbors; instead, it embraces its surroundings and takes its cues from the land it was built on. This was no accident, according to principal architect Carl Posewitz, of Paradigm v2 Architects in Missoula. “So much of the layout of the house was determined by the external amenities of the site,” he says. Focusing on the creek that runs through the property, as well as the park-like setting of the backyard, Posewitz, project architect David Gray, and the owners designed a home that felt cozy and expansive at the same time.

“One of our main inspirations was the time we spent living in New Zealand,” say the owners, “and how the homes there really embrace the outdoors by opening up all the way.” Running with this idea, Posewitz incorporated as much glass as possible on the back of the house, including several Vista Walls (essentially an entire wall of retractable windows.) On the second floor, a bed and fireplace invite visitors to relax on a screened-in porch, perched above the yard. “The porch is my favorite room,” says Posewitz. “ Your brain has a hard time getting around it — you think you’re inside, but you can hear the creek, smell the trees.” The owners credit the idea for the porch to their Midwestern roots, where such features are common on houses.

The porch wasn’t the only feature imported from the Midwest:  Wanting to honor their ties to Indiana where they both attended college, the owners decided to have the home’s façade built of Indiana limestone, taken from a quarry where they swam during their university days.

It’s this attention to detail — coupled with the willingness to be bold — that truly makes this home stand out. Throughout, the stark lines of steel I-beams, Fireslate counters, and glass tabletops are accented with bright, fun colors; a daisy-printed rug, a chartreuse wall, orange bar stools.

However, this home is about more than just beauty and design: it’s a hard-working home as well. “We love to look at beautiful things,” says the owner, “but we’re also a family that really lives. We knew our house would be full of dogs and bike cleats and ski boots and children and pizza. We needed it to be able to do both of those things.” So amongst the cutting-edge design features you’ll find “the world’s largest mudroom,” complete with a dog shower and floor-to-ceiling cubbies, a section for each family member. You’ll find a space dedicated to housing and tuning bicycles and skis. The children’s shower and bathtub have a room all to themselves. And yet even in these working spaces, the aesthetic remains.

Interior designer Leah Talbot played a big role in bringing this two-fold vision into reality. From the beginning, she focused on design that was modern, clean, bold — and at the same time durable and utilitarian. “This project was one of those dream projects…I love hard surfaces, and this house has a lot of those.” She says that because “the owners have such great spatial sense, and sense of color, and sophisticated taste,” she was able to focus on the design elements, and leave much of the decoration up to the owners. Her artistic touch is especially apparent in the angular kitchen island, and the fresh, funky bathrooms throughout.

Everyone involved with the project mentions the teamwork involved in making this home a success. “The architect was talented, the builder was impeccable. So when you have a team like that, it’s always a success,” Talbot says. Posewitz concurs, citing the uniqueness of the project as the driving factor: “Everybody knew this was a gem of a project, and everybody did what it took, went the extra mile.”

That uniqueness was what excited builder Dave Edgell as well; “It was certainly fun for us, because it was something different. We’re seeing very few contemporary homes being built here.” Yet, while Edgell believes that “a contemporary house will always be a rare house in Montana,” and there tends to be a resistance to “non-traditional” architecture, both he and Posewitz are starting to see more interest in Modern house design. And, they say, it’s at least partially a result of this one project.

“If I were to use a football analogy,” says Posewitz, “I’d say most design is played between the 40 yard lines. This home stretched that playing field way out. People are realizing they can be bold, and there’s a bigger design vocabulary to choose from.”

And yet, while the house is visionary and unique, a model for future design, it’s also something more important: the fulfillment of one family’s dream. While children play upstairs and two dogs lounge on the porch, the owner gazes out over the backyard and says “We feel so comfortable here, all the time. Honestly, there are so many nights we go to bed saying ‘we’re so lucky. I just love living here.’”

Left: Cabinets built in Missoula by Stensrud Cabinet Company flank the upstairs hallway. The warm glow of the wood is nicely mirrored by the funky, modern lighting, and together they offer a counterpoint to the industrial-style windows. • Center: The owners wanted to retain one of their favorite Midwestern design features: the screened in porch. This modern version features a fireplace and a view of the park-like yard. • Right: “The World’s Largest Mudroom” allows each family member to organize their soccer cleats, ski boots, bicycle helmets, work gloves, and anything else they might want to store in the custom-designed bins and cubbies. The mudroom also features a dog-sized shower, for the canine members of the family. 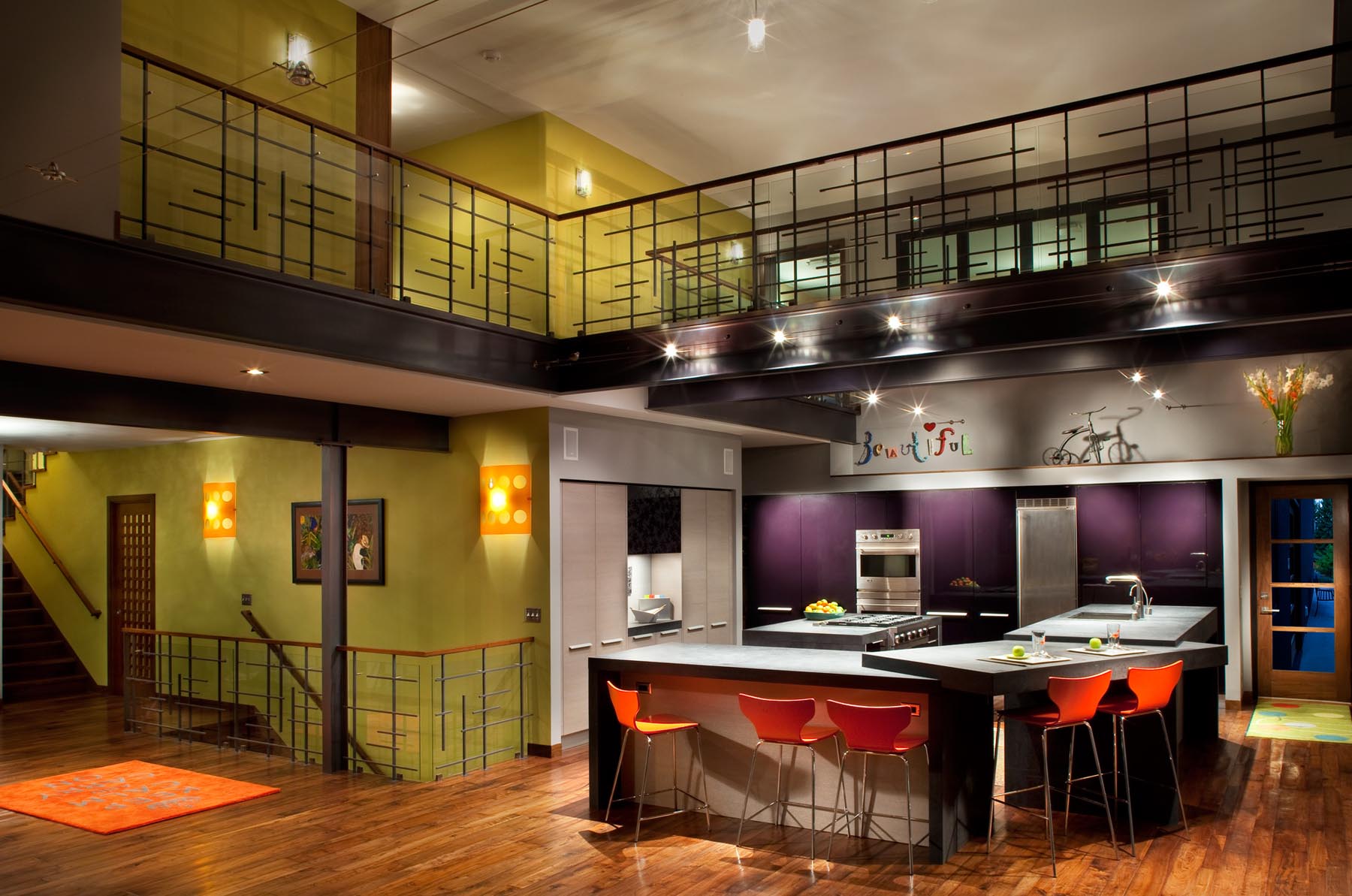 The kitchen showcases Fireslate countertops, designed by interior designer Leah Talbot, Italian cabinets, and, as throughout the house, hand-distressed walnut floors. The catwalk above pays homage to the work the owners have done in facilitating bike-and-walk bridges throughout Missoula. 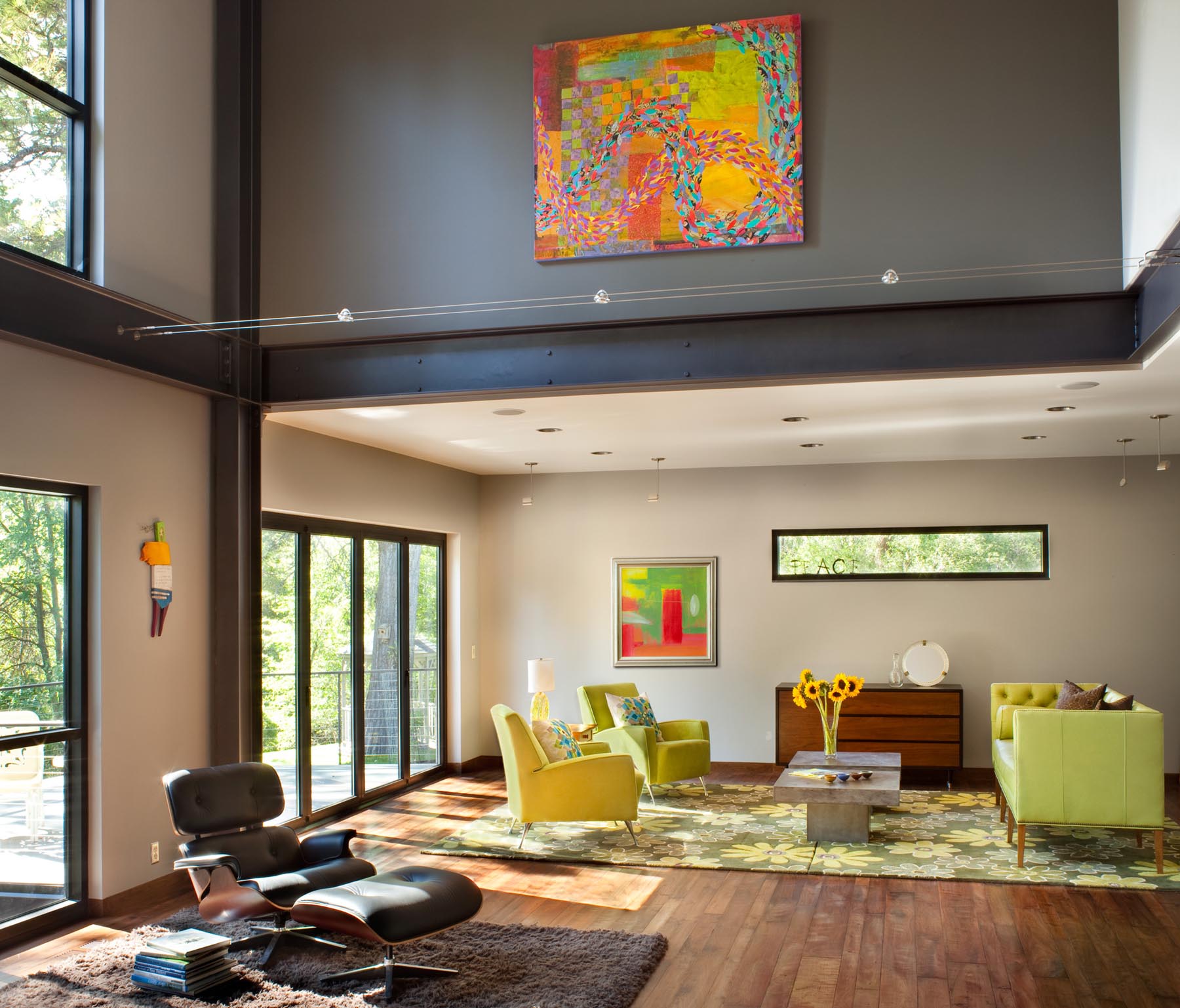 Throughout the home, stark lines and structural elements are highlighted by bold, fun colors and modern art. Here, the living room gets plenty of western light through a Vista wall, which can be fully opened. 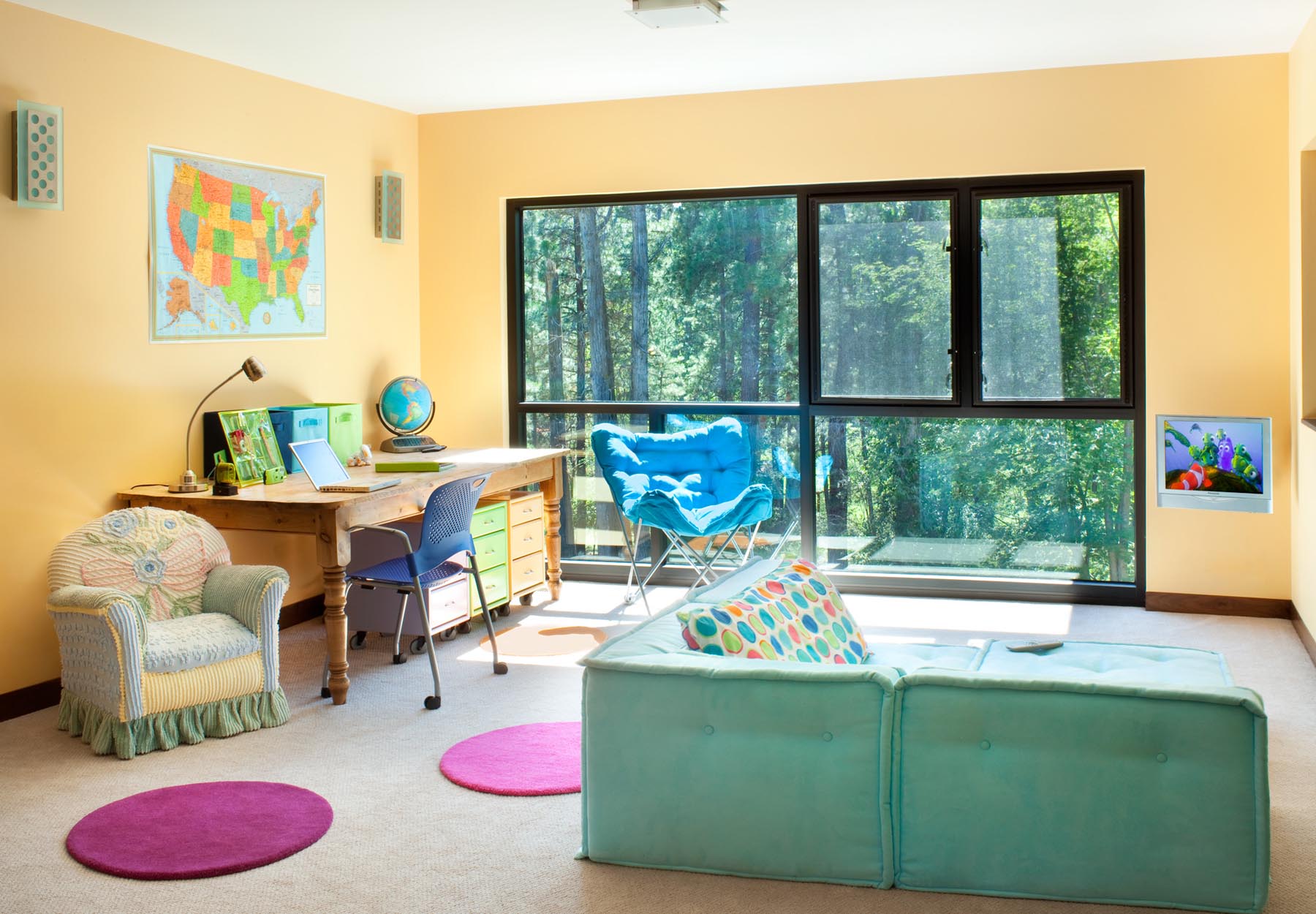 Three daughters share a section of the house, and helped design the space to accommodate their needs: smaller bedrooms allowed them the opportunity for this large common area overlooking the creek.