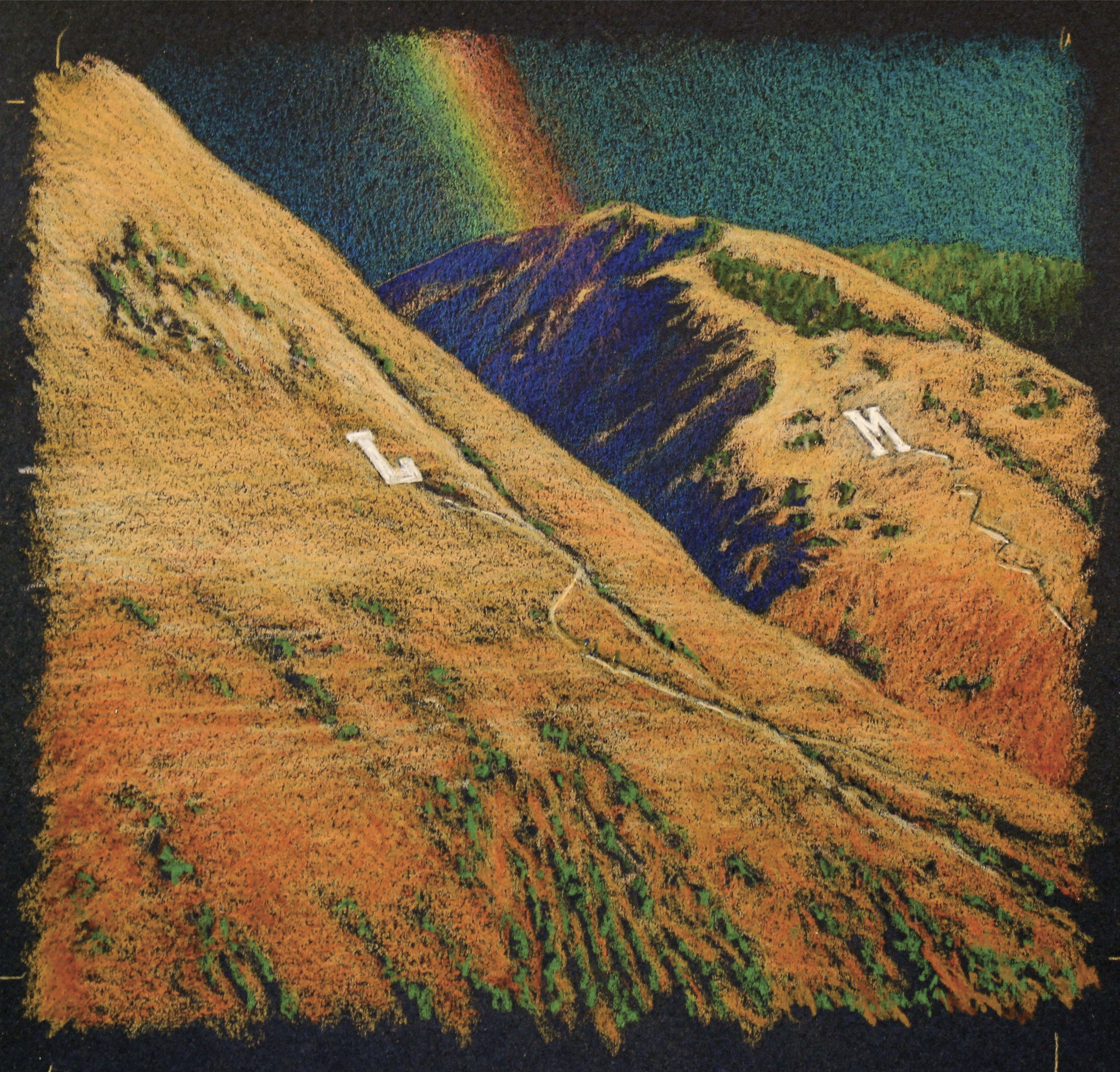 in Winter 2012, Outside Written by Greg Thomas | Illustrated by Fred Thomas Posted at 16:15h 0 Comments
Share

Back in the 1990s, while attending the University of Montana, I was anything but a model student. I was interested in the outdoors, not in the classroom, and knew then exactly what I wanted to do: fish, hunt, hike, bike, and backpack … and share my experiences through images and words.

I’m basically doing exactly what I set out to, but I only understand now how taking an interest in economics, finance and business, among other subjects, could have made an easier life. That tunnel vision made my college education anything but rosy as I covered the entire range of achievement, from near failure to the dean’s list, on my way to finally earning a journalism degree.

In addition to those classroom struggles, my identity shifted from a college basketball player to a common student after I dislocated and tore every major ligament in my left ankle. Without basketball I lacked a social hub and, truth be told, I really missed being in the spotlight, on the court, with the ball in my hands, controlling the game under watchful eyes.

At times — and I figure it’s this way for most people in their 20s — I didn’t know exactly how things might work out, or if they would work out at all. I wasn’t into counseling and wasn’t confident enough to share my concerns with friends, so I looked elsewhere for relief. And on most occasions that took place about a thousand feet above the university, on Mount Sentinel, its yellowish, grassy slopes seeming to drop out of the sky, ending right at the northern base of the UM campus.

With a break in classes I’d jog 100 yards from Aber Hall and start up a trailhead that leads to one of Missoula’s signature landmarks, the 125-foot-wide by 100-foot-tall, brightly white painted concrete “M.” It rests on Sentinel’s west face and is, along with a massive grizzly bear sculpture located on campus, the university’s iconic feature.

From an elevated perspective, looking south to the Bitterroot Valley, west to Idaho, and north into the Rattlesnake wilderness, I took stock of my future and formed plans to make it all work. I watched cars speed by on Interstate 90, examined all the students walking from building to building like tiny, busy ants, and kept an eye on all the planes landing and taking off at the Missoula airport. Setting that hustle against a backdrop of mountains and seclusion offered a sense of clarity I couldn’t grasp a thousand feet below.

I left Missoula after college and right as I was making that transition, in the early to mid-1990s, there were rumblings about a new subdivision on another Missoula mountain, Jumbo, which rests just across Interstate 90 from Mount Sentinel and leads into the Rattlesnake wilderness. That would have changed Missoula’s skyline forever and it might have spelled doom to an elk herd that uses Mount Jumbo as winter range. Much of the subdividing would have taken place, I recall, on a narrow ridge leading out of the Rattlesnake wilderness and onto Jumbo’s grassy south-facing slopes, which remain mostly snow-free even during the heart of winter, providing sustenance for elk, deer and other wildlife. Essentially, those animals would have been cut off from their winter food supply.

Unlike Mount Sentinel, which was owned by the Northern Pacific Railroad and the U.S. Government, and donated to the university by those entities in the early 1900s, Mount Jumbo was privately held. Fortunately, in 1995 Missoula citizens passed a $5 million bond to preserve open space in Missoula County. Two million of that bond, plus $1.5 million from Montana Department of Fish, Wildlife and Parks, Five Valleys Land Trust, the Rocky Mountain Elk Foundation, and the U.S. Forest Service, along with major private donations, secured more than 1,800 acres for wildlife and public access, and prevented massive development on Jumbo.

I moved back to Missoula just over a year ago, after spending eight years in Montana’s Madison Valley where public access is abundant. But there’s a difference, I have found, between public access in a broad valley and public access just outside your back door. In the Madison Valley, I had to drive 20 minutes to an hour or more to reach a trailhead. In Missoula, I walk 150 yards from my front door to start up Jumbo. If I cared to, I could hike up to the “L” on Jumbo, which represents Loyola Sacred Heart High School, continue through the Rattlesnake wilderness, ditto with the Bob Marshall wilderness, then wander into Glacier National Park and eventually across the Canadian border into Waterton National Park, having crossed, I believe, just two highways. In the 1960s or 1970s, or if I ran contraband, that equation may have meant something different to me. But now it’s just a way of looking at what could be a monumental backpacking foray.

Despite spending so much time on Mount Sentinel during my college years, I have to say that Missoula’s public mountains mean much more to me now than they did then. That’s because I have two daughters — Tate and Myka — who are learning about wildlife, landscape and the value of public access. I took Tate on a massive hike this summer, from our front door to the very tip-top of Sentinel and back down, explaining the value of setting and achieving goals, which I hope will lead her to be an independent, peak-bagging and backpacking junkie as she grows older. I’ve told her, “Think about a few years down the road, when you and your girlfriends load up your packs and head out on your own, for a day hike, or maybe for an overnight, or maybe for a week at a time.”

“Without you?” she’s asked in surprise, adding quickly, “I want to do that.”

Myka is younger and has a little more trouble with Mount Jumbo. Several times she’s taken spills on the “L” trail and ended up with a dusty face, a bloody nose, and scraped knees. But the mountain means a lot to her, too: its pastel, yellowish slopes drop right down to her school. She loves the mountain being part of her educational landscape, but she doesn’t like the ticks she packed home last spring after a “nature walk” up the trail.
I learn something new about the girls each time we hike Missoula’s mountains, from Myka’s bravery, to Tate’s determination and athleticism, to the girls’ natural sibling rivalry, to what their dad would do to protect them.

I learned that just over a year ago, in late August, just before dark, while hiking Jumbo. Just a switchback down from the “L” I saw something on the trail and said to the girls and my sister, Kim, “Man, that’s a big black lab.” Instead, it was a large, mature black bear heading right up the trail, quickly, toward us. This was just after a woman was roughed up by a bear a few miles away in Pattee Canyon. I’d forgotten the bear spray, so I picked up a big rock and said to Kim, “Take the girls off the trail and go straight down the mountain.” I moved toward the bear, ready to throw the rock, yelling, “Get out of here,” with absolutely no fear in my body. If that was the way it was going to be, whether I got attacked or not, or even killed, that was the way it would be. I’d have gone down with no regret, having done what I could do and needed to do for my girls. That’s a change, as my father, Fred, might tell you, because when I was young I wouldn’t even sleep in a tent in my backyard for fear a grizzly might pull me from that shelter and devour me alive. That the nearest grizzly bear lived several hundred miles away from Seattle made no difference. Fortunately, that big Mount Jumbo black bear saw me coming and headed up the mountain, through a timbered draw, and I never saw it again.

I live in a small house near the base of Jumbo that is just large enough to call comfortable for me and the girls. I don’t have the view I truly desire and I’ve learned that view properties are difficult to come by in Missoula — even if you can find one, you’ll pay a steep price for it. Sometimes I think about development and whether I’d have a better chance at a broad view if they’d developed the saddle and face of Jumbo. It would look like Missoula’s South Hill, I am sure, with roads wandering somewhat aimlessly, and a mix of well-kept neighborhoods next to completely degraded ones. A view home, that’s comfortable and safe for the kids, is my ultimate goal. But I can say today, for sure, I would rather have Jumbo and Sentinel as open space, to provide life lessons, adventure and exercise for the girls and me, than to have that coveted view. For that, I am indebted to those visionaries who saw the value of mountains for Missoula and did what was necessary to protect them.