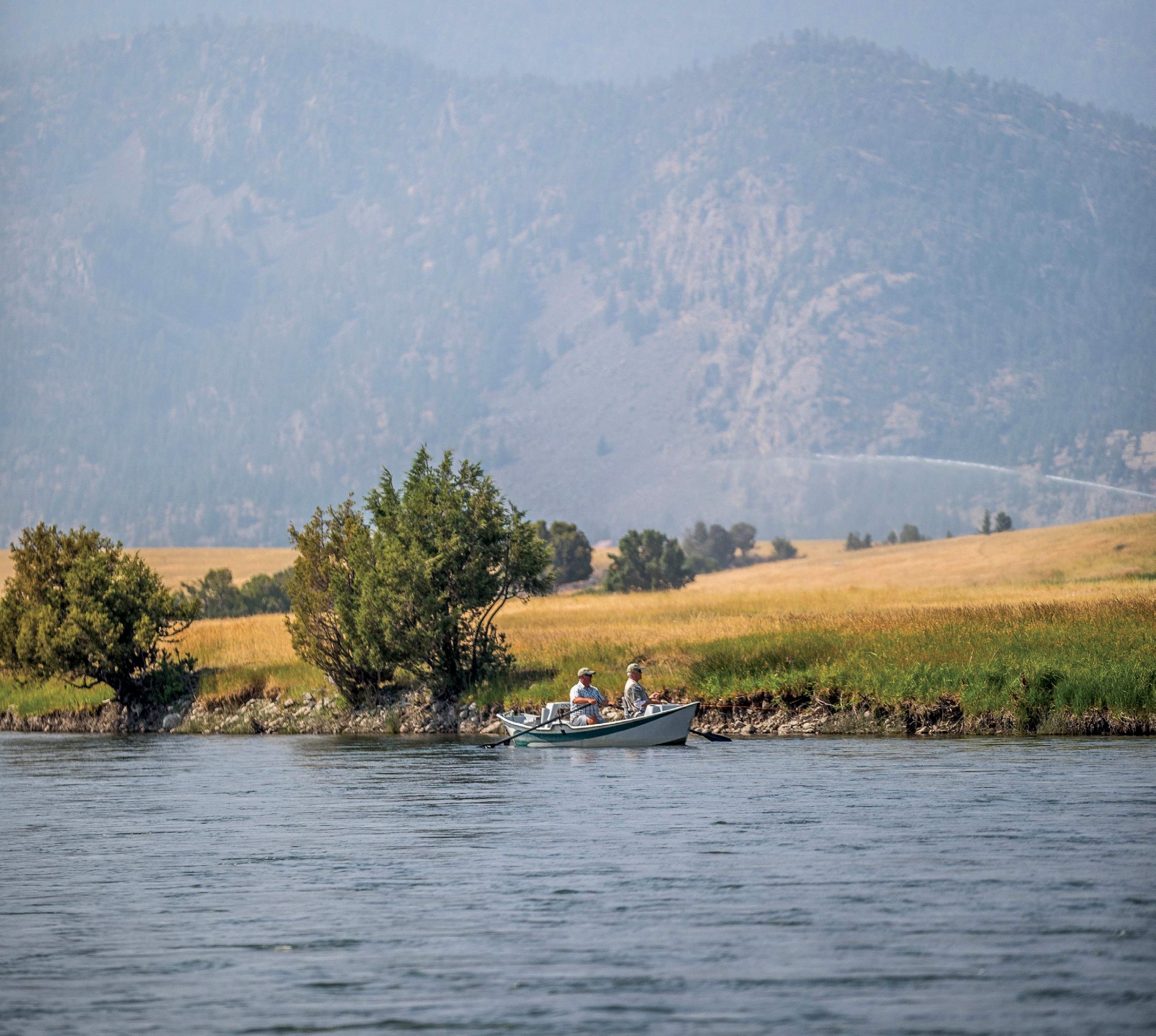 04 Feb Mending on the Yellowstone River

Considering the situation that each one of us was in at the time, floating through paradise hardly seemed like an apt description of the fishing trip we were on. All 13 of us on the river those two days had come face-to-face with our mortality. We were not in imminent danger, but we all knew that our allotted days were almost at an end. While it might seem that we were being carried to the underworld on the River Styx, we were actually floating through Paradise Valley on the Yellowstone River; for many of us, it was the most magical fishing trip of our lives.

How I came to this juxtaposition involved two twists of fate. The first was a diagnosis of stage IIIC prostate cancer. The second came when I was perusing a Temple Fork Outfitters catalog and ran across a “Reel Recovery TF” fly rod. According to the catalog, $25 from the sale of each rod went to an organization called Reel Recovery, which claimed to be “helping men in the cancer recovery process by introducing them to the healing powers of the sport of fly fishing.” 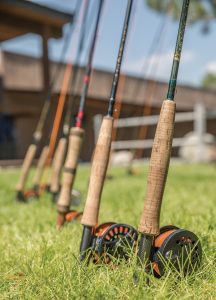 After digging a little deeper, I found out that Reel Recovery sponsors freshwater fly-fishing retreats all over the country for men living with cancer. Being a saltwater fly fisherman, I wasn’t familiar with many of the locations, but I had heard about the Yellowstone River and blindly applied for a retreat in Emigrant, Montana. I sent the application in on a whim, and quickly forgot about it, so I was shocked when I received an acceptance letter.

Right away, that letter radically improved my outlook on life. For a while, I’d been listless, stumbling along with no goals or motivation. I felt like a tapered leader that had seen too many flies and been pruned too many times; my usefulness seemed to be near an end. The thought of an upcoming trip to Montana changed all of that, and glum thoughts about my disease were replaced by the delicious anticipation of an upcoming adventure, visiting a place I had always dreamed of.

At the Bozeman airport, I immediately noticed the friendly looking, outdoorsy people milling about, the soaring mountains outside the windows, and the Tyrannosaurus Rex statue looming over the travelers in the baggage claim. It was quite different from New Jersey’s Newark International Airport — aka the Seventh Circle of Hell — that I had just come from. Seemingly a third of the travelers here were carrying fly-rod tubes. Had I unwittingly stepped into the fly-fishing capital of the world? 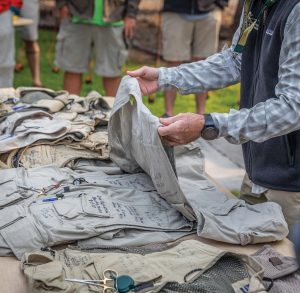 The vest signing ceremony on the first day of fly fishing is a moving event in which participants claim a fishing vest and add their signatures to the back, joining those of past participants.

Back home in Rhode Island, my friends tend to regard my fly-fishing obsession with a mixture of amusement and pity. But here, if I showed up at a high-society event wearing waders and a hopper fly embedded in my ear, I imagined that no one would even raise an eyebrow. And if they did notice, they might suggest trying a different fly.

On the drive to Emigrant, I was in awe. With the landscape laid out in a magnificent scale, surely, I thought, the Creator must have been in an expansive mood when he chiseled out Paradise Valley.

The lilting notes of waxwings filtered down from the cedars as I parked at Dome Mountain Ranch. When I stepped into the lodge, I was greeted by Tim Rote. Serving as one of the trip coordinators, Rote has that warm, engaging personality that I now associate with Montana. He introduced me to Lennae Klyap, one of the ranch managers, who explained that they donated the use of their cabins for this retreat. I soon discovered that Reel Recovery has only a couple of paid employees, and that they depend on volunteers and donations of food, lodging, and gear (including rods from Temple Fork Outfitters). The list of supporters includes many big names in the fly-fishing world, such as Orvis, Simms, Patagonia, Redington, Scientific Anglers, and Trout Unlimited, along with a bevy of other foundations, companies, community organizations, and healthcare providers.

That afternoon, we gathered in the lodge with our facilitators, Jeremy Alcoke and Justin Short, for the first of what they called our “courageous conversations.” They explained that while men are expected to be stoic and keep emotions bottled up, these sessions allowed us to unburden ourselves. We had all gone through cancer treatments, some that were truly horrific, and most of us were in remission; however, we knew that cancer does not practice catch and release.

I found the courageous conversations to be therapeutic but also draining, and many others found them to be uncomfortable. Alcoke had to endure some ribbing, but in the end, I think we all benefited from them in different ways. “Never in a million years did I think I’d be OK sharing my feelings in a group setting,” said participant John Sibert. “But I discovered it was just what I needed.” 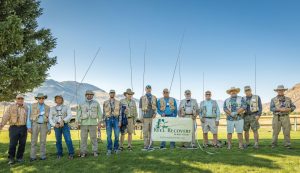 he group gathers for a photo during the closing ceremony at Dome Mountain Ranch in Montana’s Paradise Valley.

The following day, we got to the fishing. The first step was claiming a vest and signing the back of it, where those from previous retreats had also scribed their names. Participant Tim Murphy said that for him, this vest signing was the most moving part of the retreat, making him feel like “part of a community in fellowship with previous participants.”

Next, we were each assigned a “buddy” to serve as our fishing guide for the next two days. Mine was Mike Wiseman, a Bozeman-based architect with a strong back and a pleasant disposition, even when I repeatedly fouled my line. Wiseman, along with the 19 other volunteers, had burned two of his vacation days to work with us, displaying a kindness and generosity that this hard-boiled Easterner ended up experiencing from most of the people I met in Montana.

Western meadowlarks in the field across the river announced the day as we launched from the Carbella boat ramp. I was positioned in the bow, with Wiseman in the middle manning the oars and Justin Short in the stern. We began to cast, and as a saltwater guy, I soon realized I had no idea how to fish a river. Wiseman patiently showed me how to shorten my casts and mend the line upstream so it didn’t drag. 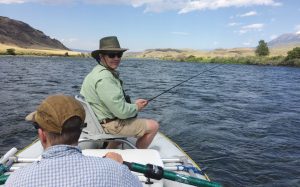 The fishing was totally engrossing; between mending and watching my fly, I didn’t think about cancer even once. A simple grasshopper fly called Dave’s Hopper was the most effective, and in most trout-holding areas, we got at least a sniff. One spot, where the wind pushed grasshoppers off a bluff and into the cascading whitewater, was particularly exciting. Every cast into this torrent produced a violent strike, but we were going so fast that it was over in seconds.

In the boat, I had to be alert. The pockets that hold trout, like opportunities in life, come hurtling at you and recede just as fast, so you have to make the best of each one or lose it. But for some in the group, it was a little different. During the courageous conversations, many of the men described being written off by their doctors, but thanks to new treatments or bull-headed perseverance, they’d been given another opportunity at life. Sibert described being in and out of the hospital for nine months with acute undifferentiated leukemia. At one point, when he went into septic shock, the doctors told him to call his wife, because he would not survive the night. He said no; he refused to die. And here he was on this river of life.

That evening, while hearing stories like this, I watched the setting sun as it illuminated the dun-colored mountains to the east behind the ranch. Here were the buttresses, ramparts, parapets, and spires of the Absaroka Range in bold relief. Surrounded by these ancient cathedrals of stone, I listened to the brave testimonials of the men. 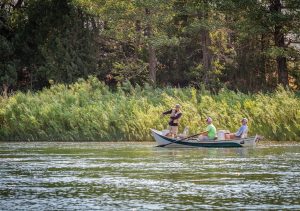 Teaching cancer survivors to fly fish is only one element of a Reel Recovery retreat.

The next day, I was more relaxed on the river and able to enjoy a greater range of what the Yellowstone had to offer. At the river’s edge, I enjoyed the company of teetering spotted sandpipers and skittering family groups of common mergansers. Yellow warblers darted like shuttlecocks weaving a golden thread through the riparian chokecherry, willow, and dogwood. Kingbirds provided the sparks and swallows provided the whispers, while a fellow fisherman announced an osprey overhead. Some of these birds were new to me, while others spend part of their off-seasons on my home waters along the coast of southern New England. In the winters there, they live a miserable existence trying to survive the cold, so it was refreshing to see them happily cavorting on their breeding grounds.

On our last day, we performed a closing ceremony under a weeping willow tree at the ranch, while lightning lit up Electric Peak in the distance and thunder echoed off its flanks. We were asked what we would take away from the retreat, and for me, that was easy to answer: to never give up. Looking around the circle at my new friends, I admired the strength and bravery of each person. 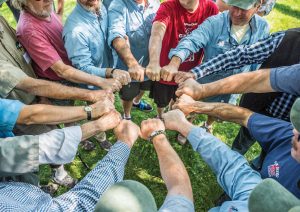 Reel Recovery doesn’t offer a cure for cancer, but it does offer respite and the chance to build bonds with people who understand and can relate to what we’re going through. As Jerry Crum (1949–2008), founder of the Nevada chapter said in 2004, “I discovered that while fly fishing, I was in another place. In this place, there was no cancer, no pain, and no fear.”

Reel Recovery offered me more than respite; it changed my perspective on cancer and life in general. Instead of despair, I learned to savor every day, give thanks for my wife, my family, and for just being alive. From our guides, we heard “mend, mend, mend” for most of our time on the river, and by the end of the retreat, I think we were all mended in our own ways.