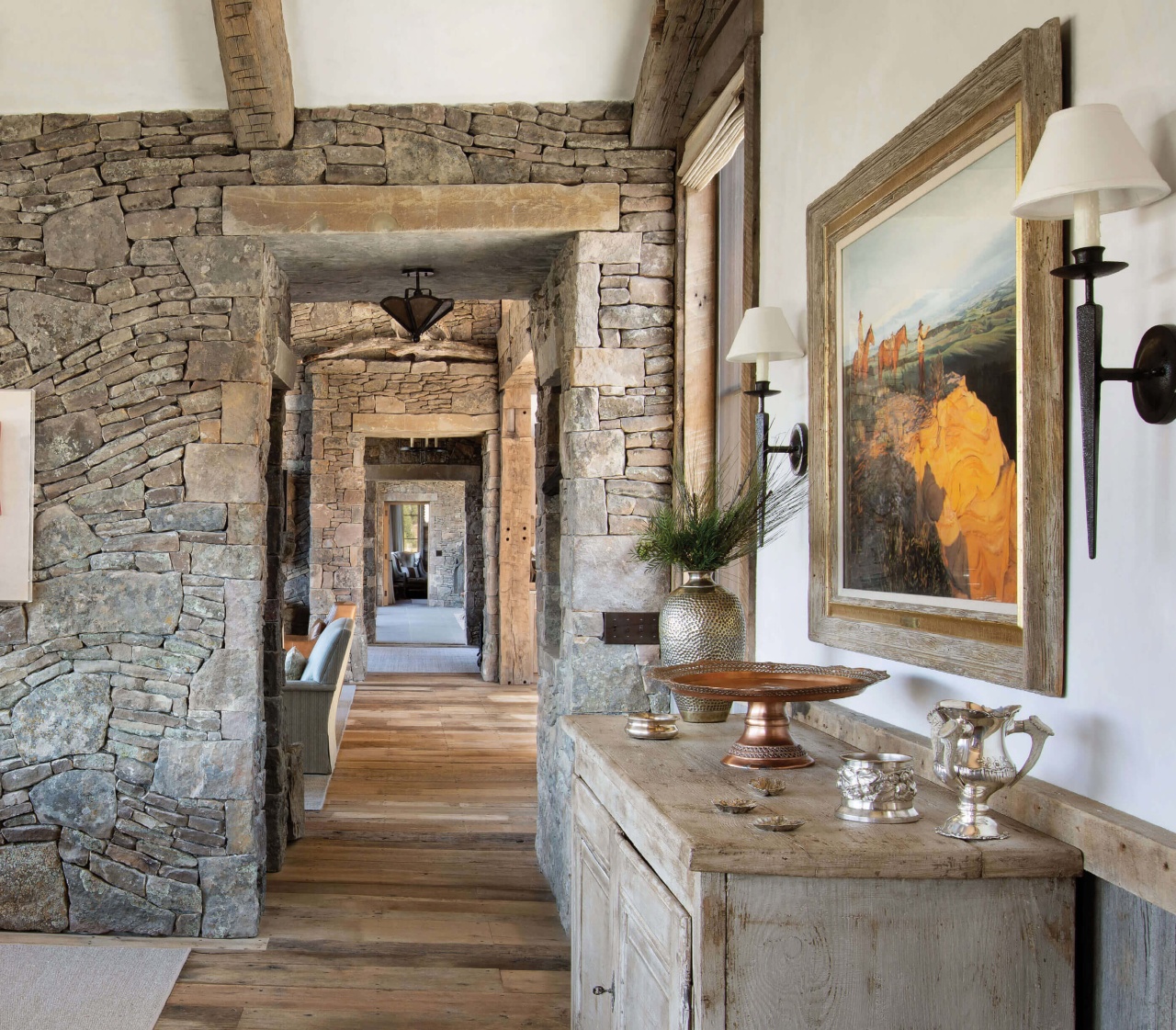 The design intent for this home in Big Sky, Montana, was to create a series of intimate spaces that are linked by porticoes. Here, the dining room looks to the north through a series of stone lintels. The reclaimed wood floor, plaster ceiling, and native moss rock — set in a domaille stone pattern — complement the extraordinary views.

For Ken and Sandra Moffet, it all started with the lot. Located in a secluded part of Yellowstone Club in Big Sky, Montana, the 3-acre parcel they found afforded incredible views of the Madison Range, including including Big Sky Resort’s iconic Lone Peak, Cedar, Pioneer, and the prominent Sphinx Mountain. “We were fortunate to acquire the lot,” Ken says. “We wanted to take advantage of the views and so we took a lot of time to site it properly. It was a bit of a challenge to position the windows in order to see each peak from the living room and to find and fit windows big enough to see the top of Lone Peak from anywhere in the room. We changed the framing quite a bit to capture that view.” 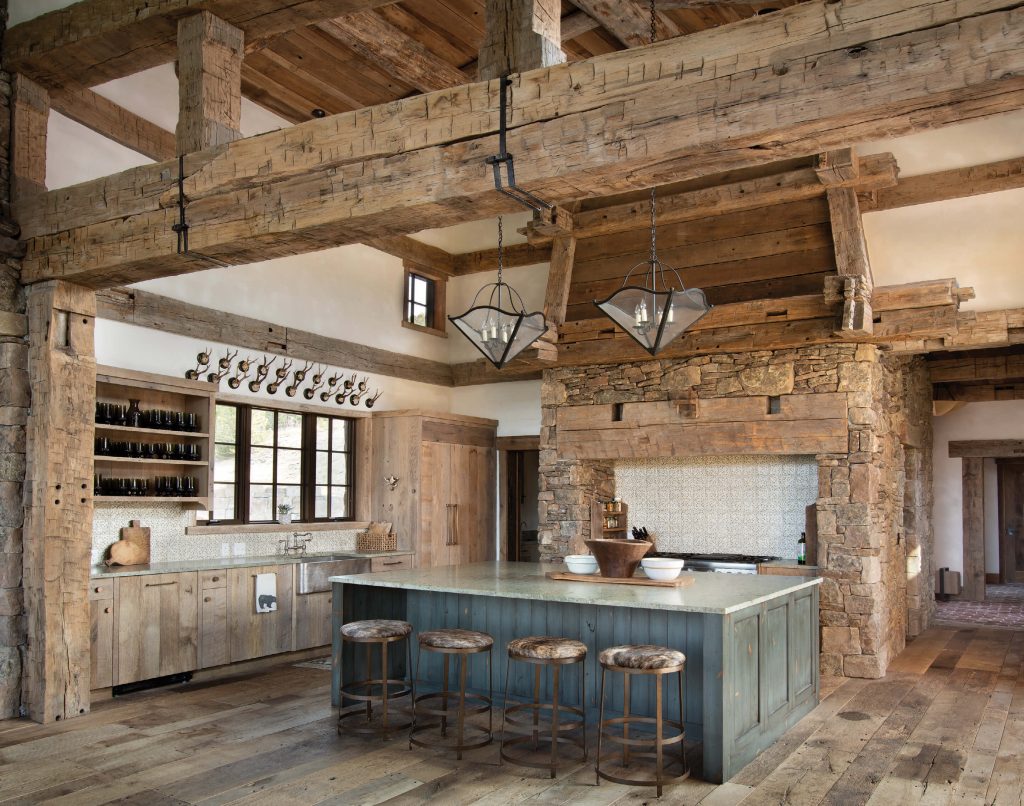 The use of iron and large beams were a central part of the design. Adding a touch of color, the kitchen island stands out, while the oven features a traditional Swiss oversized flue made of wood. The range hood and lintel are surrounded by stone.

The Moffets had worked on another house with architect Keith Anderson, principal of the Bozeman, Montana-based KA Architecture, and therefore, they felt comfortable approaching him to design this one. “We had a good sense of where we wanted to go with the house,” Ken says, “and Keith understood our mindset and that we wanted to keep it rustic Montana but add some European accents.” The couple called the house “Mausefalle” after the steepest section of a World Cup downhill race course at Kitzbühel ski resort in Austria. “The lot has a steep incline to it, and because we wanted the European accent, it was a fun coming up with the name,” Ken adds. 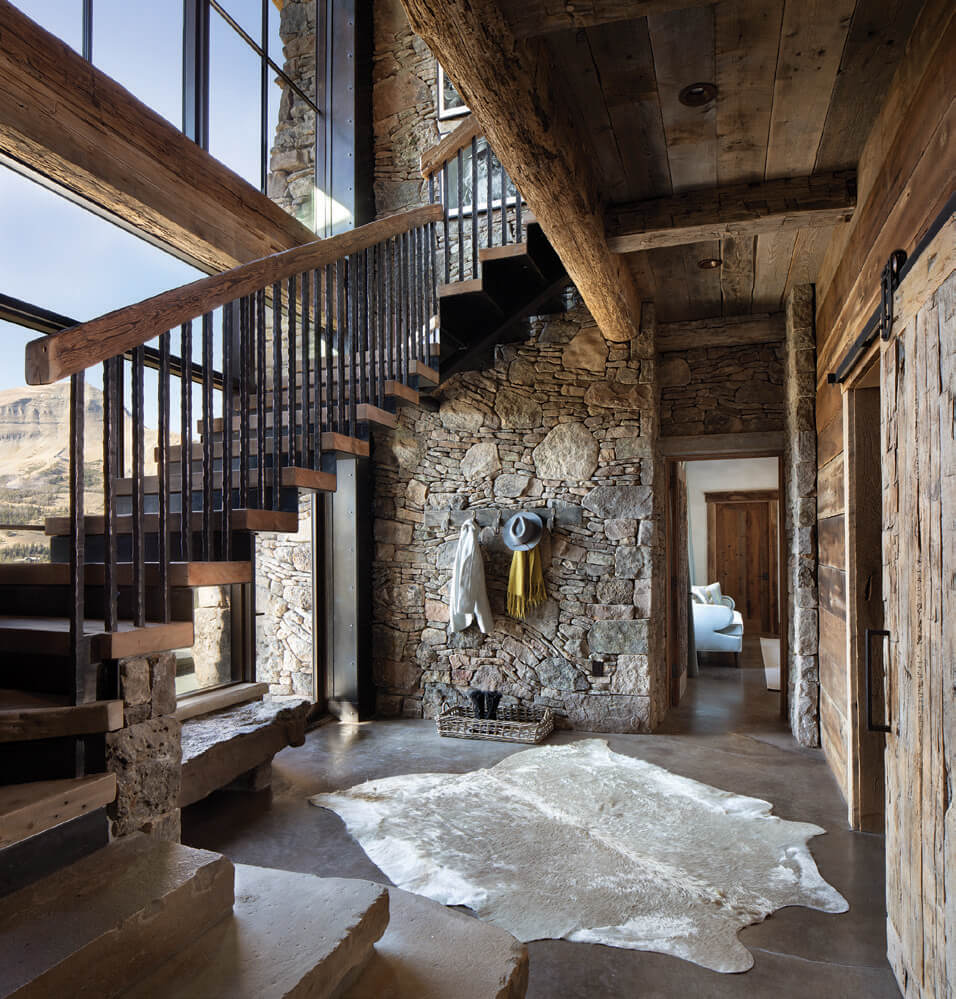 According to architect Keith Anderson, owner of the Bozeman, Montana-based KA Architecture, stairs can highlight an area without being overbearing. This stairway features a combination of raw iron and reclaimed oak treads, complemented by stone slabs and a stained concrete floor. Because they don’t obstruct the windows, this room is filled with natural light.

Anderson enjoys working closely with his clients from the first sketch on, bringing them into the process and allowing them to have authorship. “We meet, walk the site, talk, and then generate some ideas that can be used as a starting point to bring the client’s individual interests into play,” he says. And this is precisely how the Moffets’ house emerged. Together they came up with a design for the 8,500-foot structure that started with a Swiss and Austrian feel and incorporated a contemporary connection, using a breezeway to link the guest cabin to the main house. 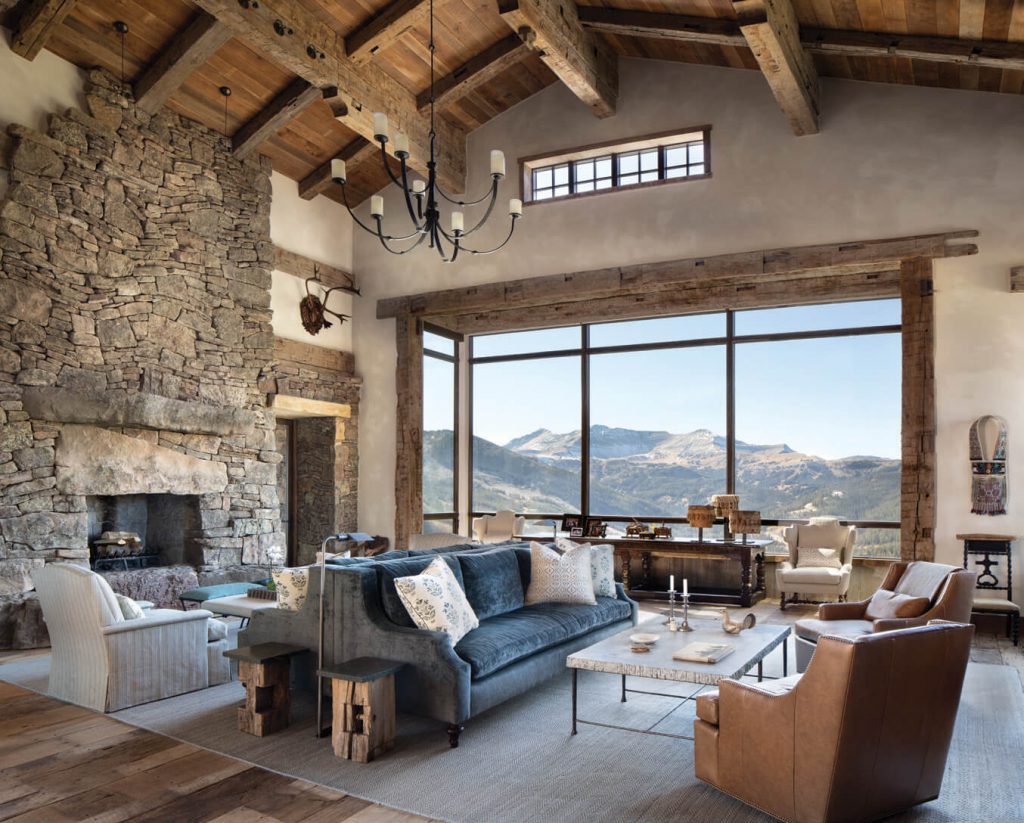 According to Anderson, a great room should always have natural light from two directions.

“Ken was looking for creativity,” Anderson says. The Swiss motif came through in the details, such as the fly rafters — overhanging areas that are 5-feet deep and created with shaped timber — the iron strapping used in the interior spaces, custom iron hardware based on historic hammered ironwork, and the use of large timbers inside the structure. “At the same time, we installed those huge windows,” Anderson adds. “Ken was adamant about the great views. There was supposed to be a sod roof, but it was taking too long, so we [decided on] a nice river rock roof.” 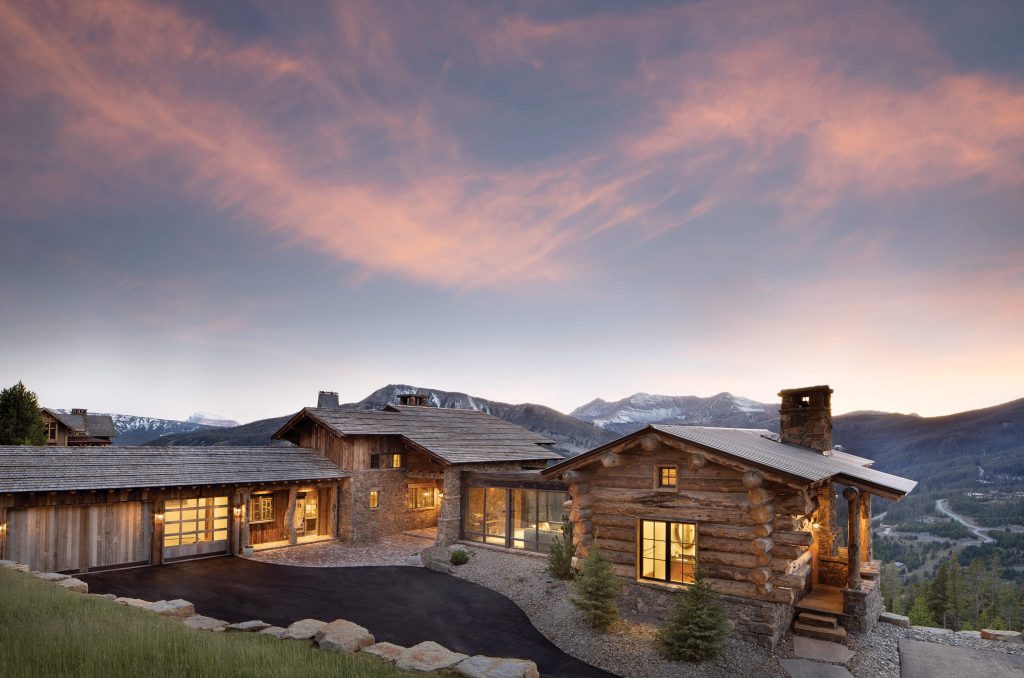 The goal for this mountain home was to create a large structure composed of well-proportioned smaller ones, capped with red cedar in a low-slung manner. The driveway and parking area posed a challenge due to the steep slope of the property.

Mausefalle can sleep 16 people and includes a homeowners’ bedroom suite, a guest cabin, and a bunkroom. Sitting at 8,500 feet in elevation, with a good amount of open space around the structure, the home takes on an estate feel. “The whole place [features] radiant heat, and there’s no air conditioning. When they want fresh air, they just open a window,” Anderson says. “It took every bit of two years to finish this project, between snow and deliveries, rising prices, and other issues. But in the end, everybody was happy with the finished project.” 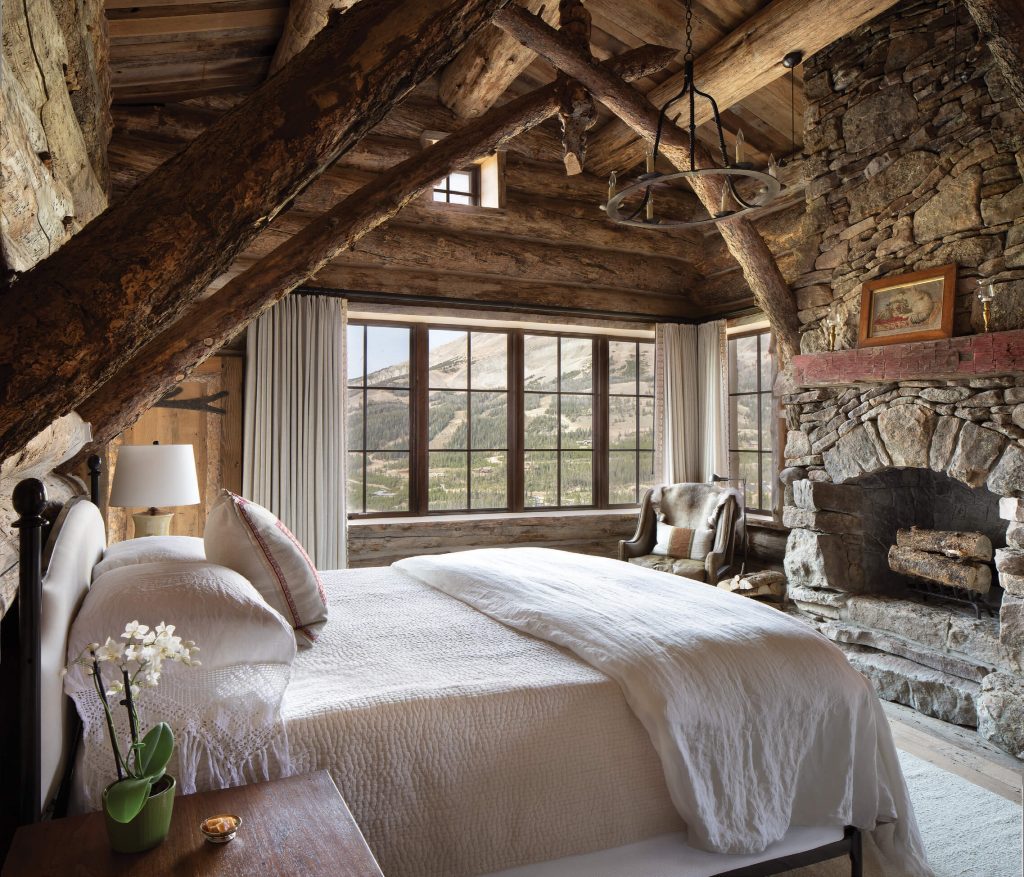 The rustic guest cabin features Swedenborgian arches, named after a Swedish pioneer. The logs were formed in a steam room at Lohss Construction.

Builder Chris Lohss, owner of the Bozeman-based Lohss Construction, has a reputation for custom projects that reflect a rustic palette, but he appreciates the challenges that come with any architectural aesthetic. “We’re doing a ton of modern homes these days, and we appreciate the opportunity to do something unique,” Lohss says. “This home definitely fit that; we had fun with that house. It was a nice collaboration, and the owners were very involved. All of their input was heartfelt — this was going to be their home for a while.” 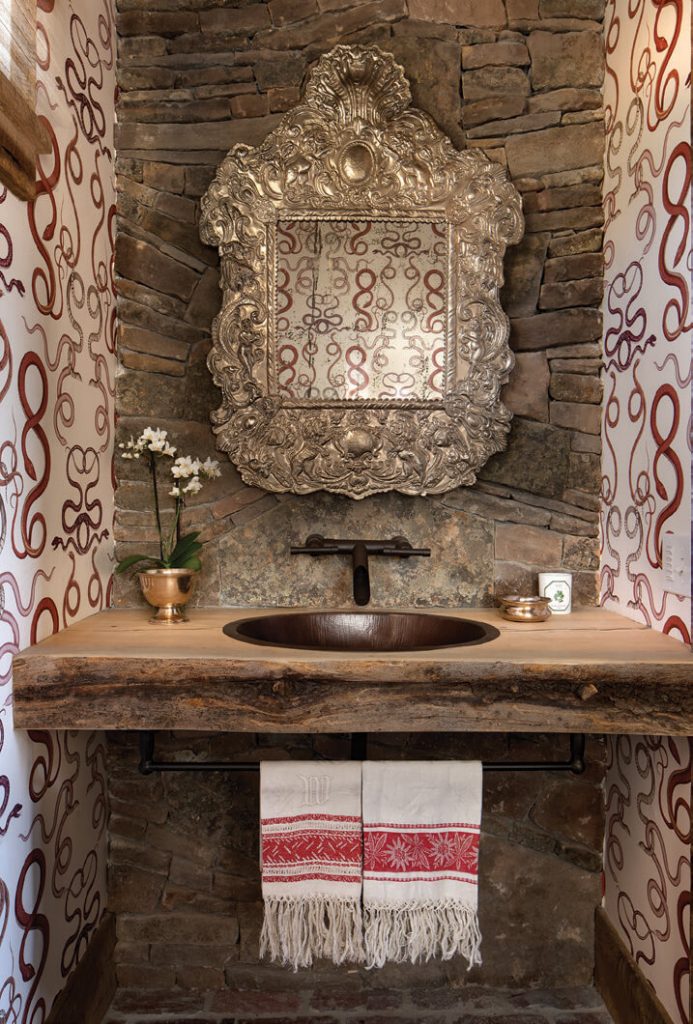 Lohss also notes that, while Anderson was very influential in his design concept, he was open to the materials that the builders could source as well as the owners’ aesthetic desires. “It wasn’t an ego-driven design,” Lohss says. “They had a good relationship, and that was what made it fun. Everybody worked together.” 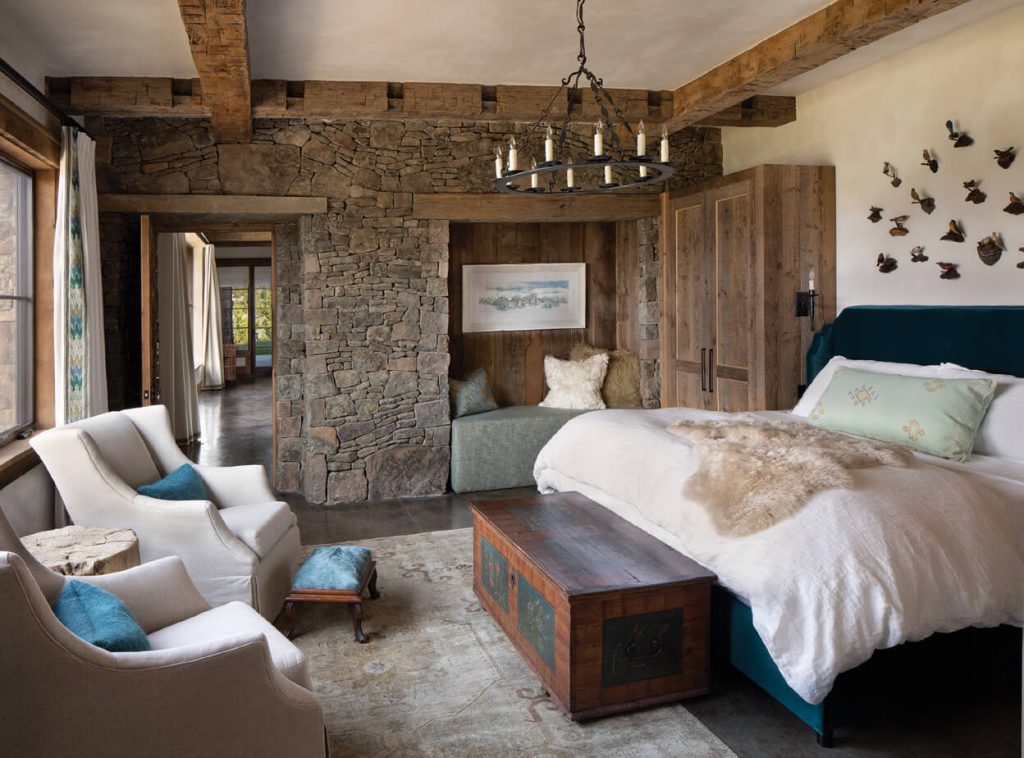 This bedroom features a portico entry, a built-in reading nook, and radiant concrete floors. Small, detailed bird sculptures decorate the wall above the headboard, and armoires are used instead of a traditional closet.

The materials that Lohss sourced for the home were unique and storied, including reclaimed hewn beams from historic barn structures. “You can get oak and hardwood in the East, [which is] a higher grade than the local softwoods,” he says. “The square timber that came out of that era was used primarily in the early to mid-1800s. We found … large-format brick road pavers from an old road that was reclaimed. The pavers were carried through from the entry to the mudroom to the patio.” 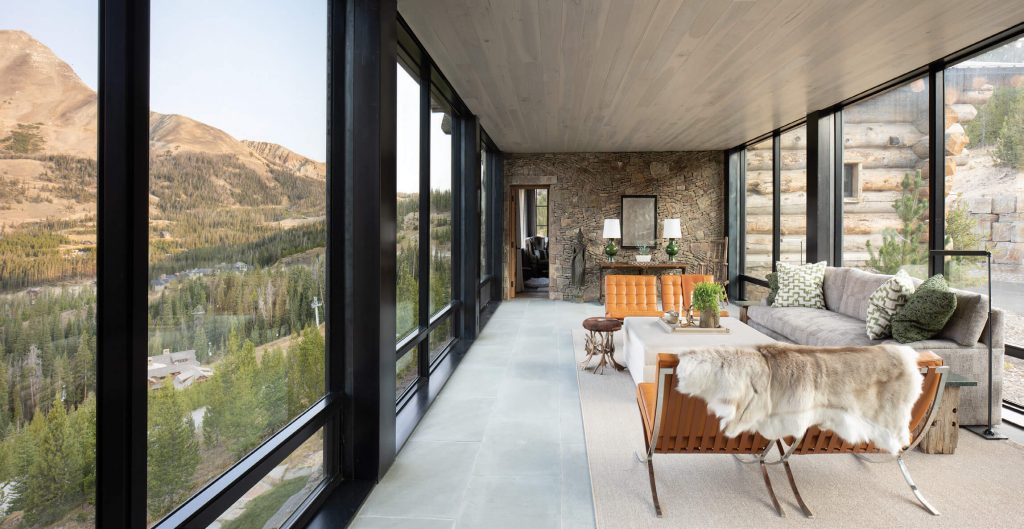 With natural light on both sides and spectacular views, the breezeway is the centerpiece of activity, connecting the main entry and great room with the guest cabin.

On the main floor, Lohss installed wide plank oak flooring — reclaimed from an old hayloft — that his team fastened with forged nails. “Ken and Sandra really wanted some of these timeless, warm elements in their home. It was really personal to them,” Lohss says. “It was to the point where Ken found arched logs for the guest cabin from another one of his Big Sky properties. He traipsed around the mountainside and found the exact logs he wanted, and it made it really special and homey for those guys.”

Because he’d worked with Anderson on a previous project, Ken says that he knew he would get a lot of direct one-on-one input with the architect. “We’ve known Keith for a long time, and we hired him because he’s as much of an artist as he is an architect; there’s that extra creativity he provides. He understood what Sandra and I were looking for, and it was an easy transition,” Ken says. “For Chris Lohss, a rustic home is right in his wheelhouse. We liked his ability to source materials, like antique pavers, beams, and barnwood from the Dakotas that we used in the living room. With Chris, it was not just his experience, but also his special ability to source materials from other places.” 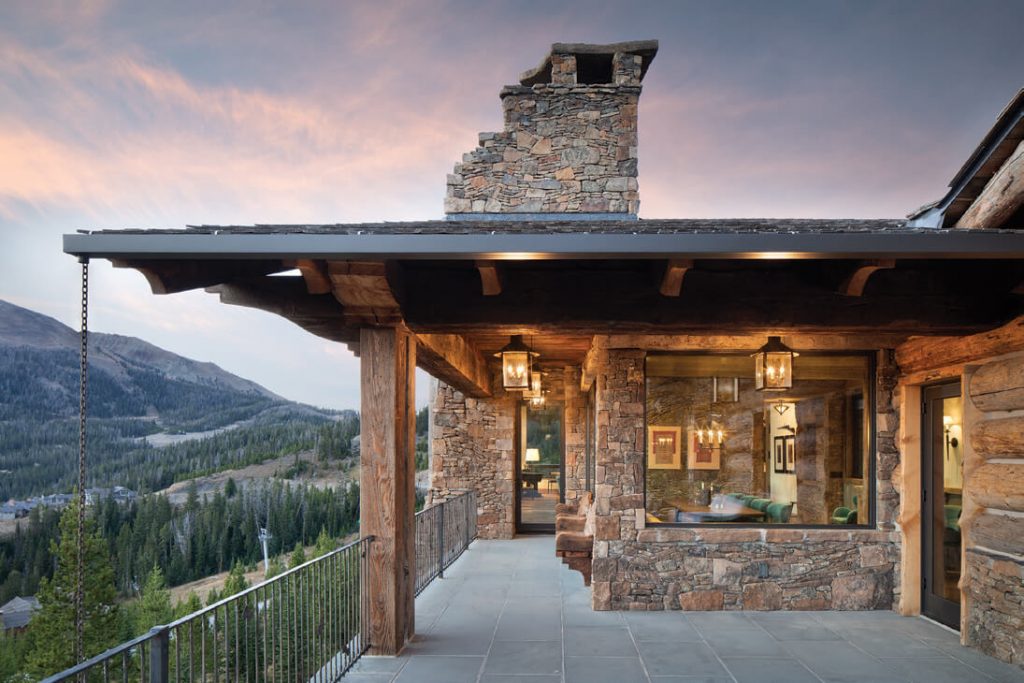 The dining terrace, built with radiant Pennsylvania bluestone, features a custom railing with an aspen leaf motif. A crane was used to place the grand, rustic chimney

As a member of Yellowstone Club since 2004, Ken enjoyed being part of the process. “We were fairly hands-on,” he says. “While it’s rustic Montana, we were interested in putting the breezeway between the rustic home and the cabin, but it’s very contemporary. It was a nod to the European museums that have contemporary additions. The breezeway is our favorite room in the house. It’s a gathering area and gets afternoon sun, and it’s a nice connector between two very rustic parts.”