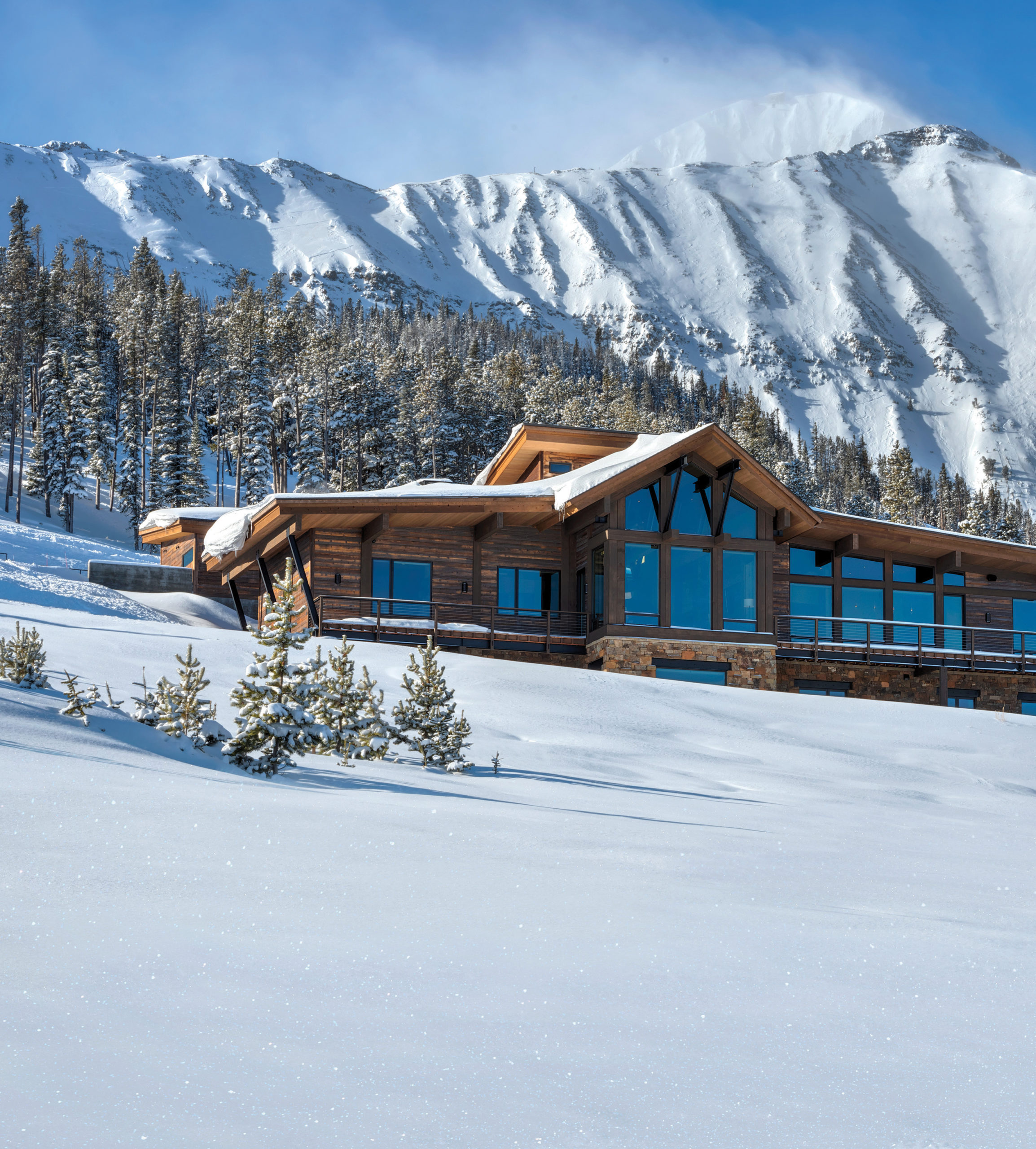 WHEN JIMMY AND MALINDA LEWIS PURCHASED PROPERTY in Big Sky, Montana, instead of focusing on the potential obstacles that they might face during the building process due to the steepness of the sloping lot, the couple set their sights on something else completely: the views. “We were mesmerized by the view of the Spanish Peaks,” Malinda says. “We’d go in the morning, in the evening, even during storms, just to look at the view.” With almost 2.5 acres at 8,000 feet in elevation in the Moonlight Basin community, the lot looks out to a vista of the Spanish Peaks on one side and a panorama of the towering mountains in the Madison Range on the other. 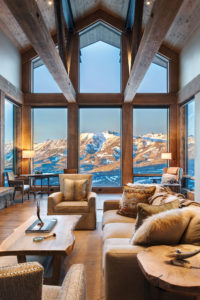 Oversized windows take advantage of the impressive views from the home’s 8,000-foot perch.

It turns out, however, that while the views were spectacular, designing a home that would take advantage of the site and its steep topography would become one of the biggest challenges. “Those are the things that define a project,” says Jamie Daugaard, principal architect of Centre Sky Architecture. “The lot is heavily sloped, so vehicle access was an issue because the owners wanted the house situated away from the existing road.” Once Daugaard started sketching, he discovered that retaining walls and a serpentine driveway would be necessary but too expensive. Looking for alternative solutions, he came up with an innovative idea: Place the formal entry and garage near the road and build a bridge to connect that to the central part of the home. “There was a lot of back and forth, a lot of discussions because it was a bit different having two main structures for the house,” Daugaard recalls. “But eventually it started to make sense. The key factor was the bridge connecting the two.” 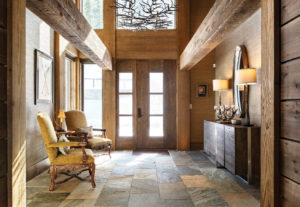 The large timbers that frame the front entry lead guests to the main part of the home and are as functional as they are decorative.

The resulting 5,400-square-foot, ski-in/ski-out home features four bedrooms — including a master suite and a bunkroom — four-and-a-half bathrooms, an open kitchen and great room, a cozy den, and a sitting area off the kitchen that looks out across the scenic Madison Valley. The garage area features a ski room, and at the rear of the house is an elevator that descends two levels in the main living quarters. 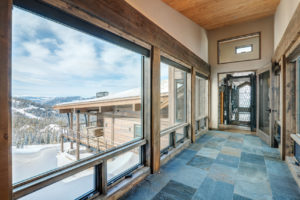 The lot’s steep topography posed design challenges. Jamie Dugaard, principal architect of Centre Sky Architecture, came up with an innovative solution, designing a bridge to connect the garage and elevator to the main house.

“There’s verticality and horizontal movement, and the grade drops fast,” Daugaard says. “As you walk through the bridge, you have windows to look out of. The hallway that leads to the elevator is 12 to 20 feet above the ground. You can go down the elevator to go to the main level or two floors down to the bunkroom. It’s the inverse of a typical home.”

Between the owners’ parameters and the challenge of the site itself, Daugaard had to think outside the box — by creating two boxes, so to speak. “A lot of times with us, we’ve never built a house like the one we’re building,” he says. “We work with the site we’re given, with the goals we’re given by the client, and then we form it together. Architecture is exciting; it’s fun. It’s a great team effort, and Malinda and Jimmy are great clients. Add to that Blue Ribbon Builders and the design consultants, it was a really good team.” 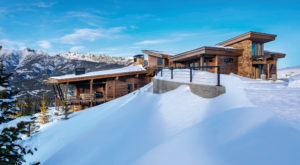 The garage/gear storage area opens up to the ski slopes, for the ultimate ski-in/ ski-out experience.

The most difficult aspect of the project for Dan Fletcher, senior project manager with Blue Ribbon Builders, was working at an elevation of 8,000-plus feet. “It’s one of the highest elevation projects we’ve done in Big Sky,” Fletcher says. “The weather is different at that elevation; the crew battled wind and snow a majority of the time. The temperatures were colder, too. Being so near the treeline, there wasn’t a lot of protection from the trees. And all of the snow had to be moved below the home site. It took up a lot of time.” 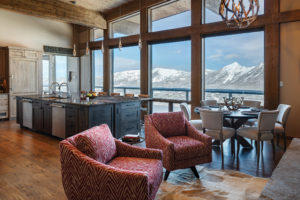 The open-concept enhances a feeling of spaciousness in the home, while also offering a way to bring people together.

The flip side was that going to work meant being on top of the world, surrounded by all that natural beauty. “The house is really cool,” Fletcher says. “But with the lot being so steep, just access to it was a challenge. We had to have tire chains with spikes for our equipment, typical chains did not work. We also had to do the project in phases, starting with the foundation in the main part of the home, then jumping up to large board-formed concrete for the retaining walls. In order to build a driveway to access the trucks and equipment, the final phase was the garage foundation.” It took the crew just under two years from the time they broke ground to when the Lewises started moving in furniture. 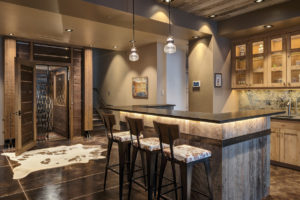 The elevator from the garage area opens up to the kitchen and great room.

Blue River Builders has been working in Big Sky since 1975, and they boast a veteran crew of managers and foremen who understand high-elevation construction. “We’ve built houses from the top of the mountain to the Meadow Village,” Fletcher says. “We’ve had extra training for building in alpine climates. These kinds of buildings need to stand up to snow loads, high wind, and low-humidity conditions.”

With a lack of humidity at high elevations, the wood has to be as dry as possible, Fletcher explains. To that end, Blue Ribbon takes extra steps like microwaving timber in order to prevent shrinkage. “These are things we’ve learned through our experiences,” Fletcher adds. 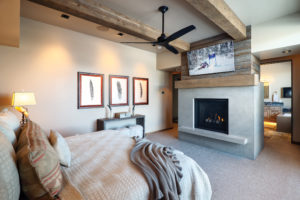 A fireplace adds an element of coziness to the master suite.

Despite the challenges, the Lewises could not be happier with the house. “The view is so spectacular,” Malinda says. “I told Jamie that I wanted a view from every window, and he came through. It truly is the place where I go when I need some peace and serenity. It really is a home. We’ve always been happiest in Montana, and it has exceeded our expectations.”