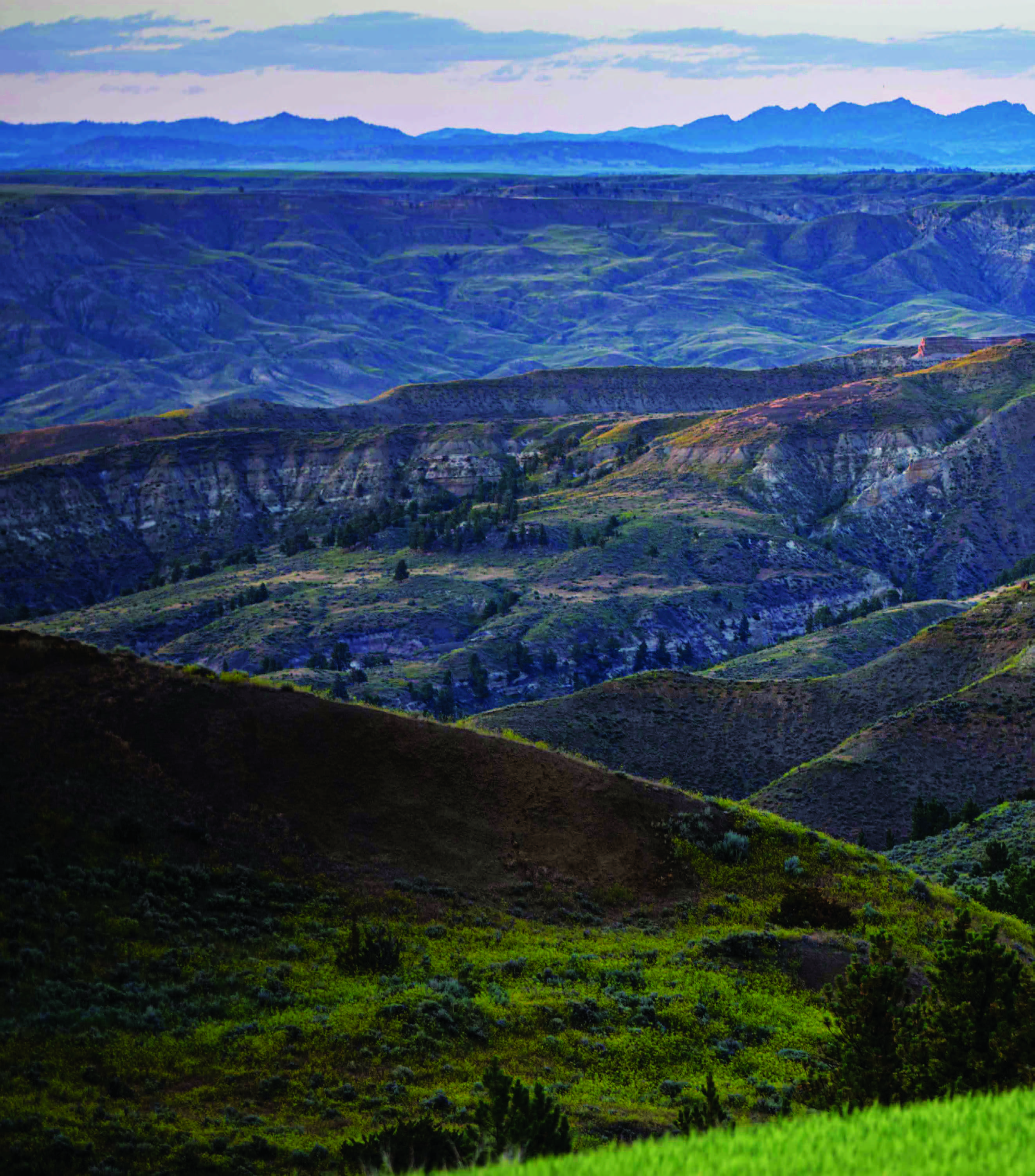 16 Oct Love Song to the Breaks

MY ABIDING LOVE OF THE MISSOURI BREAKS was earned through sustained hardship, a little like how stubborn streptococci earn resistance through repeated exposure to antibiotics. 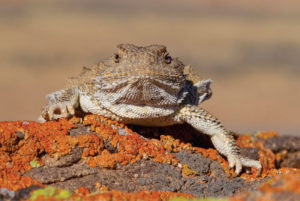 A short-horned lizard warms itself in the sun.

I arrived in the Breaks later than some, sooner than most. I was a year out of college, carrying a lever-action Savage and a key to a cabin at The Pines, a recreation area on the remote north shore of Fort Peck Reservoir that takes its name from the peninsula of ponderosas shading an otherwise treeless sea of gumbo knobs and shale ridges.

I would come to hunt, frequently in the company of my boss at the Wolf Point Herald-News. Harry “Skip” Downs, whose family owned the cabin, chain-smoked Kools in his hunting rig: a wide-tired Jeep that he left only to piss or to shoot from, often off the hood and always with an escalation of missing and cussing. “I’m just looking for a cripple,” Skip said at least once every outing, usually after emptying his magazine at fleeing animals.

The scouring power of wind and water form the carved and curious landscape of the Missouri River and its tributaries, the Breaks.

I started making excuses to walk, to get out of the choking smoke in the Jeep, and get a shot at a deer or antelope that wasn’t already in full gallop.

Stretching my legs in those early days, covering miles of the lonely prairie that frames the Breaks, I learned the curious natural topography of the place: the oases of low-slung junipers on the shady north slopes of sun-blasted ridges; cryptic buck beds scoured out of bentonite banks; spiky short-horned lizards in the crumbling rimrocks. I also discovered the secret human history of the place: teepee rings resolved from glacial till, sheepherders’ cairns presiding over sheepless drainages, crumbling 50-caliber machine gun cartridges fired by Air Corps cadets who flew out of the old Glasgow bomber base back in the war years.

I also learned a fundamental lesson of the Breaks: self-reliance. When you are in the interior of these million acres of sagebrush tablelands, gumbo canyons, and alkali flats, you’re on your own. You may see evidence of prior human use here, but outside of hunting season you can drive or walk miles without encountering another visitor with breath in their chest. Their solitude may make the Breaks a balm for the harried, but it makes a lousy place for a breakdown.

Most visitors to the Missouri River Breaks see the place either from the blacktop of U.S. Highway 191, driving between Lewistown and Malta, or from the water, paddling a canoe down the Wild & Scenic stretch of the Missouri River, or maybe slow-trolling an outboard on windy Fort Peck Reservoir. They see this as a landscape of negative topography. Unlike Montana’s calendar-worthy peaks, the Breaks’ most remarkable features are deep, labyrinthine, water-carved canyons. Passers-through get enough of the place to intrigue and beguile, but not enough to test their patience or resources, or to get inoculated in the vastness of this empire of space and sky. Hundreds of thousands of acres of similar-looking BLM land tip almost imperceptibly into the rugged river breaks, but neither the gouged and scoured canyons nor the surrounding short-grass prairie could exist without the other, which is why my definition of the Missouri River Breaks is more expansive than most. 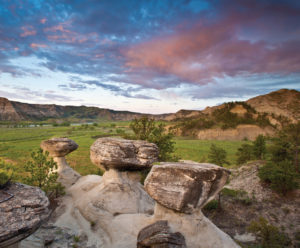 To test the thesis that the Breaks resist both habitation and affection, visit here on foot on an August afternoon, with a blistering wind in your ears, ravenous mosquitoes on your cheeks, and the withered landscape cured to shades of suede. Or come in the winter, with roads drifted shut and no distinguishable difference between frozen sky and frozen earth. 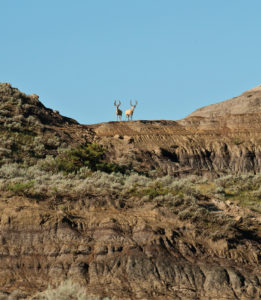 A pair of young mule deer bucks watch a visitor approach from a gumbo knob.

The heart of the Breaks is the Charles M. Russell National Wildlife Refuge (CMR), created as the Fort Peck Game Range in 1936 to protect wildlife (primarily pronghorn and sharptail grouse) in the rugged country around the proposed Fort Peck Reservoir. The CMR is still serving that purpose, home to carefully managed populations of bighorn sheep, elk, mule deer, and pronghorn.

Many who visit the CMR with a hunting permit in their pockets see the Breaks through a rifle scope. They also experience it in its most gracious season. To test the thesis that the Breaks resist both habitation and affection, visit here on foot on an August afternoon, with a blistering wind in your ears, ravenous mosquitoes on your cheeks, and the withered landscape cured to shades of suede. Or come in the winter, with roads drifted shut and no distinguishable difference between frozen sky and frozen earth.

Even the fall, when the land softens and every ridge beckons, is not immune to the Breaks’ resistance. Years ago, after spending two unproductive days bowhunting elk in patches of timber off Iron Stake Ridge, I started for home as a cold front blew in. The rain started north of Fourchette Bay, and shortly afterward, so did the fishtailing. Gumbo disguises itself as a nondescript gray, granular dust, but water catalyzes it, converting it to industrial lubricant. Within 2 miles, I was off the road, hopelessly stuck, my wheel wells packed with greasy mud and my tires reduced to ineffective slicks. 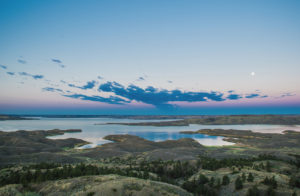 Sprawling Fort Peck Reservoir covers the eastern half of the Breaks.

It took two days for the road to dry out. I ate all my food the first evening, read the entirety of my pickup’s owner’s manual the next day, and broke the boredom with high-minded CBC Radio out of Regina and bad country music out of Malta. Finally, I hiked a sloppy mile to a high point, where cell service allowed me to assure my family I wasn’t dead. But there was no driving, for me nor for would-be rescuers.

Since then, any time I venture into the Breaks, even for an afternoon scouting mission, I pack provisions — for eating and reading — to sustain me for at least three days.

If the untimely arrival of water can stymie travel here, then the absence of it defines much of the Breaks, ironic since its very name derives from a great river. If you’re on the Missouri or Fort Peck, hydration is a cinch, but on the bluffs and uplands, the only water is mossy, alkaline, and diarrheal, which means you need to bring your own if you plan to visit for any length of time.

With few roads across it, or all-weather access spots into it, the Charles M. Russell National Wildlife Refuge (CMR) requires visitors to plan carefully and allow enough time to reach remote destinations. But two places, the Slippery Ann Elk Viewing Area, just east of the Fred Robinson Bridge on U.S. Highway 191, and The Pines Recreation Area, south of Fort Peck, give visitors a good idea of the terrain and scale of the refuge.

SLIPPERY ANN ELK VIEWING AREA:
Visit Slippery Ann the fortnight following Labor Day for a cacophony of elk. Rutting bulls bugle, rivals answer, and scores of cows bask in the attention, all within sight of a well-maintained gravel road. The area is closed to hunters, but wide-open to wildlife photographers and visitors eager to witness this seasonal extravaganza. 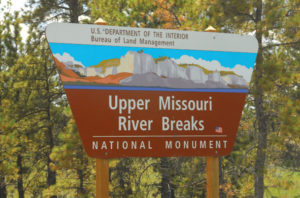 THE PINES RECREATION AREA:
The Pines are accessible via a good gravel road off of Montana Highway 24, which connects Glasgow with Fort Peck. Turn west at the sign and then south off Willow Creek Road. The Pines boast a boat ramp, picnic area, nature trails, and exposure to a variety of terrain, from shortgrass prairie to timbered ridges to gumbo lakeshore. If you prefer a boat to an automobile, you can float the Breaks through the Bureau of Land Management-administered Upper Missouri River Breaks National Monument.

Be aware that travel through the Breaks is highly weather dependent, and some roads are closed seasonally. Maps of the CMR are available at the refuge headquarters in Lewistown, or at field stations in Fort Peck, Jordan, and Sand Springs, just off U.S. Highway 191 south of the Missouri River. 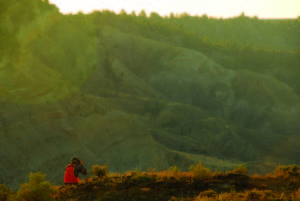 A hunter glasses for bighorn sheep.

THE ALLURE OF THE BREAKS

I’m aware that I’ve given more reasons to stay away from than to visit the Breaks. Maybe that’s intentional. Like a husband who gives faint praise to his remarkable spouse, lest her best assets be revealed, I guard the Breaks with a brand of selfish understatement. 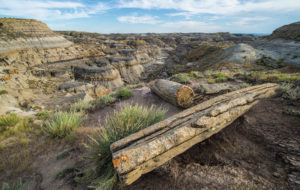 Petrified wood, along with fossilized dinosaur bones, are remnants of earlier geologic eras.

They are, simply, my favorite place on earth. If they defy easy visitation, they reward deep immersion. Their desolation hides a secret world of verdant glades and fossil-studded ridges, achingly beautiful vistas and sour-soil sinkholes deep and mysterious enough to appear as portals to the underworld. Public-land managers — and this is nearly all public land — don’t prioritize visitation infrastructure. The few trails here are made mostly by hoofed game, and there’s so little evidence of modern humans that it’s easy to indulge that universal fantasy that yours are the first feet to tread many places in this area.

The great gift of the Breaks is that they reveal their charms grudgingly, and then all at once, in a profusion of earned epiphany. Once you receive it, no other landscape in Montana will ever quite match its gifts of solitude, discovery, quiet enchantment, and, yes, hardship. Nothing about the Breaks comes easy, and that more than anything is its deep, elemental appeal. 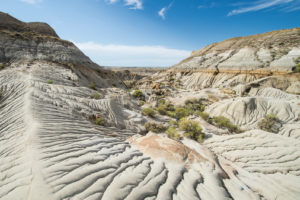