From the Editor: In the first year of Big Sky Journal, the Keeler & Reece column added a dash of sporting humor with comical writing and punny illustration. This collaboration was published in Summer 1995 and ran again in the Arts 2013 edition.

In trying to describe that longing between human desire and the unattainable, the Romantic poets of the early 1800s wallowed in melancholy and came up with a whole new school of poetry. For half a century they sat around brooding about things they couldn’t have. Keats ate melancholy like grapes and sulked about nightingales; Wordsworth had to go lie down to think about daffodils; Blake wallowed in the incomprehensibility of “tygers”; Byron and his brain-child, Harold, trudged on futile odysseys in search of truth and love; Poe married his 14-year-old cousin but could only truly love dead women; and Shelley wanted to be a skylark, but, instead, fell on the thorns of life and bled.

Like these poets, anglers have their own brand of Romanticism, though they don’t have to strive for such elaborate language to express their thwarted desire. Usually their words are rather monosyllabic; “Gawd! Yew should of seen it! It was huge! I had it right up to the boat when it broke off!” Yes, for anglers, true negative capability may be expressed as “the one that got away.”

What is it about a fish leaping and lunging at a distance that makes it larger than life — or at least larger than when it’s panting in your hand? Why are many anglers more likely to return to a stream where some phantom force set their drag to screaming then broke off under a log than they are to a stream where they actually caught a big fish? Perhaps it’s like a painful type of love where one lover gives the other a brief glimpse of romantic possibility then splits, leaving the other to stew, brood and write morose poetry. Perhaps it resembles the straining of the imagination that sends crackpots scurrying to desert mountaintops to scan the skies for UFOs after they’ve seen a photograph of a hubcap someone tossed in the air. Whatever the impulse, so, too, will anglers be driven to odd and reckless behavior when they believe that they have lost a brown trout twice as big as God.

Sometimes it’s probably just flat out better to lose that big one than to confront the ugly reality behind the illusion; the snagged boot, the 6-pound sucker, the side-hooked whitefish have all turned gasps of awe and wonder into plodding profanity when the line holds and the myth is shattered. Here, I picture a woman who has finally snagged the man of her dreams — only to discover that he is alarmingly flatulent. But I digress.

During these bright Montana summer months, I tend to drift into my own reminiscences about the deep surge and pull of a rod bent double then the sudden shock and sinking feeling which accompanies a line gone slack.

I would like to tell you that, using a Joe’s Hopper, I hooked and lost the 30-pound brown trout that reportedly resides where the Gallatin runs into the Missouri near Three Forks — or had my Muddler broken off in the rapids of Yankee Jim Canyon on the Yellowstone by one of the atomic submarine trout which divers have seen there. But no, my story is long ago and far away from the sport and shine of Montana summers. It takes a southern Gothic turn on a tawdry charter boat out of Port Isabel, Texas, on the Gulf of Mexico.

The skipper stationed me between a nurse from Shreveport and a welder from Detroit, then plunked a rod with an electric reel in each of our hands and baited us up with chunks of anchovy. “The red snapper are so far down,” he said, “you don’t want to crank ‘em up by hand.” Electric reels were such a novel concept to us that no one objected, and soon our little machines were abuzz, zipping fat snapper out of the depths so fast that they blew up like blimps and their eyes popped out from nitrogen narcosis — our industrial strength line working so well that I dredged up a 20-pounder as if it were a shrimp. No sir, in the face of this stunning technology, nothing was escaping. The nurse, the welder and I stood by equally humongous piles of flopping snapper, democratized by our efficient little mechanical buddies.

Suddenly, in the middle of this carnage, I set my hook for the umpteenth time and the thing on the bottom didn’t budge. It just sat there for a few seconds, mulling over the sensation in its mouth. Then it started to move toward the bow of the boat at a leisurely pace. I excused myself and passed my rod over the welder as it started to whip and bend toward the brine. When I reached the bow, I noticed my reel was smoking and whistling like a little locomotive. “Loosen your f—ing drag!” screamed the skipper. “You’ll ruin my reel.” I looked down and was trying to see the reel through the smoke when the skipper cut my line. My jaw went slack and I leaned against the cabin in disbelief. “It was probably a giant grouper,” said the skipper, ignoring my stunned silence and poking at his reel as if it were a hurt pet.

That was 27 years ago, and I still find myself mumbling “giant grouper” at the edge of sleep as if it were some kind of mantra to all that has been huge and inaccessible throughout my life.

Thus I have my own emblem of Romantic loss hovering like a dark shadow over the few successes I have managed to garner over the years. As Edgar Allen Poe might have written under the circumstances:

And neither the angels in heaven above
Nor the demons down under the sea
Could ever dissever my soul from the soul
Of my beautiful giant grouper.

A Fish I Can Hold

Tell the boys at the bar I lost it,
the muskie that ate ducks
and tore up the shallows.
The striped green dragon it was
it broke off in the lilies.
I don’t care. I’ve had it with myths.
Give me a fish I can hold.
Tell the women I hooked them a rainbow
furious in color, brighter than promise,
shaking in the spray of a waterfall.
Airborne and big as a boulder,
it took me downstream
then broke me off under a log.
I didn’t lose it. It lost me.
I promise I’m through with promise.
From now on, I’ll stick to the present.
I’ll give them a fish they can hold.
Tell the kids I hooked them a sunfish
big as a dinner plate, loud as a sunset
but lost it. It went under the moss
and lay there till my knot came undone.
It was my fault. I hope they’ll learn to
tie their knots better than mine.
I can’t teach knots. I never learned them.
I’ll stick with small fish,
fish they can hold. 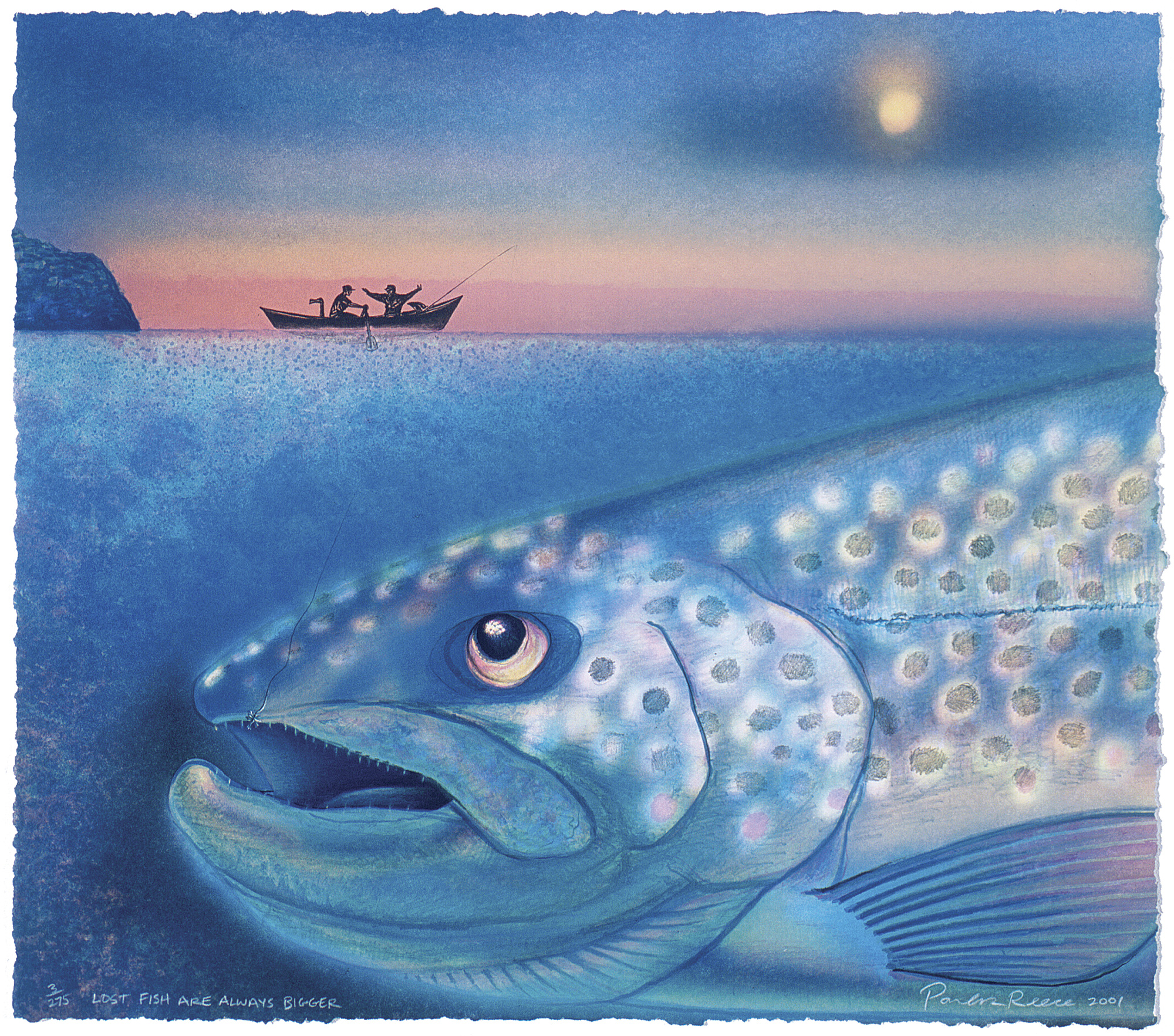