Never mind that this was Reid Smith‘s first project in the Yellowstone Club, and one of the first big projects — period — for the young architect.  From the moment he set foot on the site in 2005, Smith knew that he couldn’t say no to this job. “I was so excited about the opportunity,” he reflects.

That excitement loomed large — and literally — right in front of his eyes. Soaring skyward immediately across from the site on Andesite Ridge, Lone Peak commands every view. Smith knew that the home he was about to design would need to revolve around that phenomenal view.

Nestled into a clearing at 9,000 feet in elevation, every inch of the 9,400-square home centers around the jaw-dropping alpine vista. Smith is still visibly moved as he enters the home, known as “The Peaks,” some seven years later. “That’s one bad mountain,” he says with a grin.

Indeed the mountain greets each visitor from almost every room in the house. The window opposite the front door perfectly frames the peak and was the very first thing Smith drew in a house that the architect concedes required some ridiculous math. The owners asked for a guarantee — a first for Smith, but something he was happy to do — that the front door would open to reveal a spectacular view. After a year of design that included significant elevation research and plenty of triangulation to get the math right, Smith and his team — which included Big Sky’s Blue Ribbon Builders and Michelle Varda Interiors — delivered more than the entryway view.

The home was designed and built on an axis and with a curvature that allows every room with western exposure to capture the Lone Peak view. Smith also designed the rooms on the opposite side of the house — with features like double doors in the office opening to the great room and an open staircase — to maximize the view. Many of the rooms also boast windows that take in dramatic views of the craggy Spanish Peaks. “Everything falls off the entryway view,” offers Smith. From the scale of the house — heightened ceilings not only capture the views but create a sense of grandness — to the warm, European-influenced interiors including built-ins that direct traffic toward the windows, every detail feels tied to the mountains.

For the home’s second owners, the appeal was instantaneous: “We immediately fell in love with the spectacular views of Lone Peak, a majestic Matterhorn rising above the forest and ski slopes …” The West Coast-based couple — he a native of Montana and she from the island paradise of Mauritius — were so enthralled by the design details, including the quality of construction and the interiors, that they changed very little when they bought the house.

The way the home immediately and naturally responded to the new owners, their family and friends, is evidence of the thoughtful and intuitive design, both architectural and interior. The kitchen, for example, which features a custom copper and iron hood and two islands for work and entertaining, is a response to the home’s extensive number of beds (14!). There could easily be a dozen people in residence, explains Varda, and the kitchen needed to comfortably accommodate that. Elsewhere, in the master bath, Varda incorporated unique details, distinguishing between his and hers spaces with different finishes, specialized cabinetry, and so on.

Throughout the home, Varda enhanced the lofty spaces by softening and warming the interiors. “Scaling the fixtures and furnishings for the grandiose space was a lot of fun” she says, pointing out the exquisite custom European light fixtures that were hung to complement the views, rather than obstruct them. Varda also had fun with contrasting elements in every room. By pairing antique Orientals with cow hide rugs in the game room, and juxtaposing different sized tables in the great room’s separate seating areas, for example, Varda created an organic style.  “I wanted it to be a collection of textures, layers and different styles of furniture … things that make a room so much more natural,” she says. For Varda, the views were a part of her palette, a material to be incorporated like the stacked stone around the stunning twin walk-in fireplaces, the elegant plaster walls or the hand-hammered iron details.

What unites the inspired design with the inviting interiors is the remarkable craftsmanship. Blue Ribbon Builders, a Big Sky fixture for more than 30 years, spent two years perfecting every detail, from the world-class masonry to the artisanal woodwork covering the hot water baseboards. JoDean Bing, who owns Blue Ribbon Builders with her husband Doug, notes the advantages of having a single crew building the house from start to finish. “When they’re framing it, they’re doing everything perfectly square,” she says. “Because they know they’re going to be finishing it.”

The pride of ownership in The Peaks is shared. From Smith — who now has more than a handful of Yellowstone Club projects under his belt — Varda and Blue Ribbon Builders, to the owners who wouldn’t change a thing about their dreamy Montana home, the obvious passion for this place is a thing of beauty. 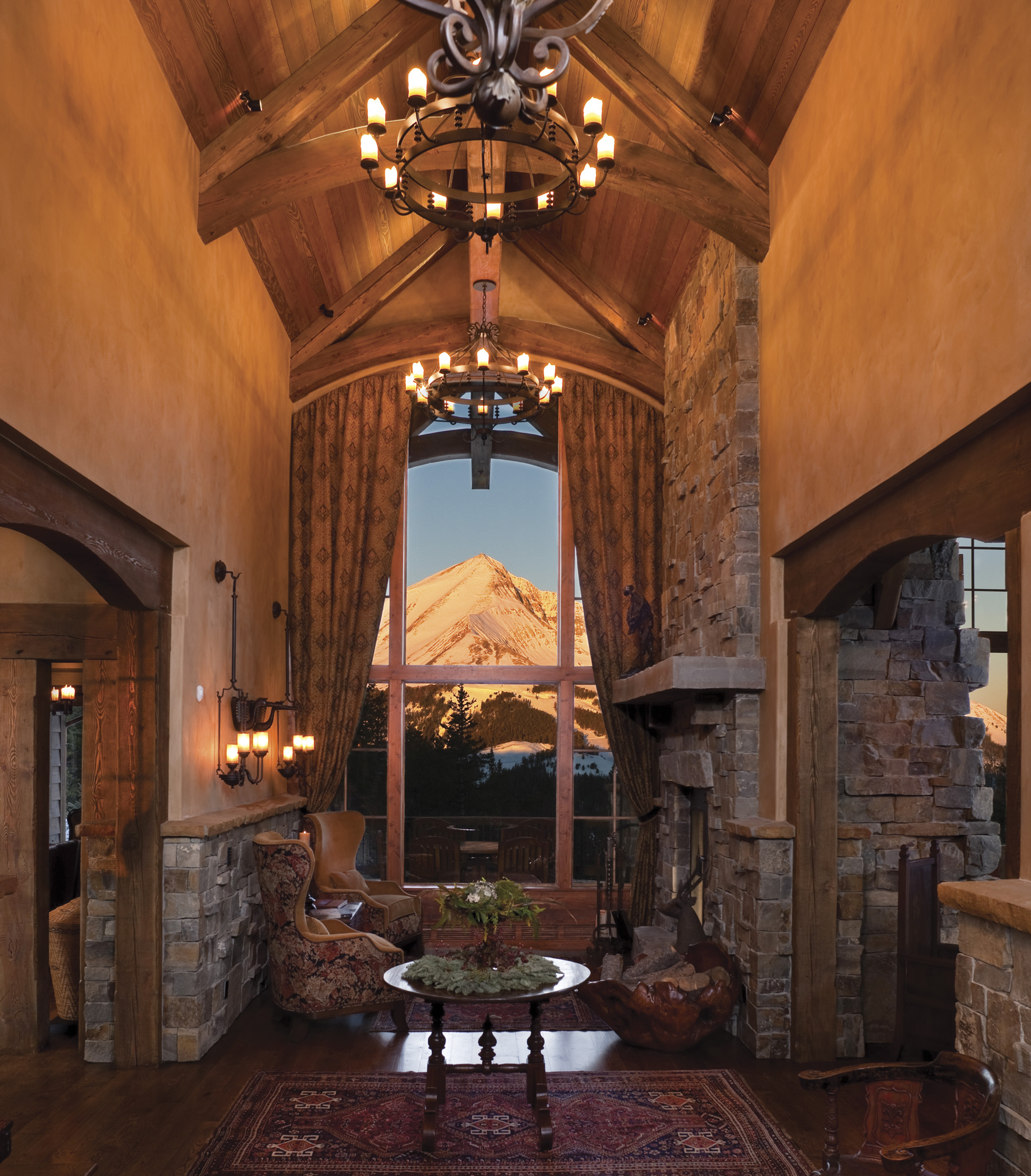 The first element drawn in the house was the entryway window framing the mountain view. Even the timber beam reinforces the line to Lone Peak. The space was designed solely for the purpose of enjoying the majestic view, explained Smith. “We didn’t wan

In an effort to capture the Lone Peak views from every room, Smith had to ask questions like, “How do we turn the corner?” Ultimately they staggered the residence down the hillside to maximize window spans. 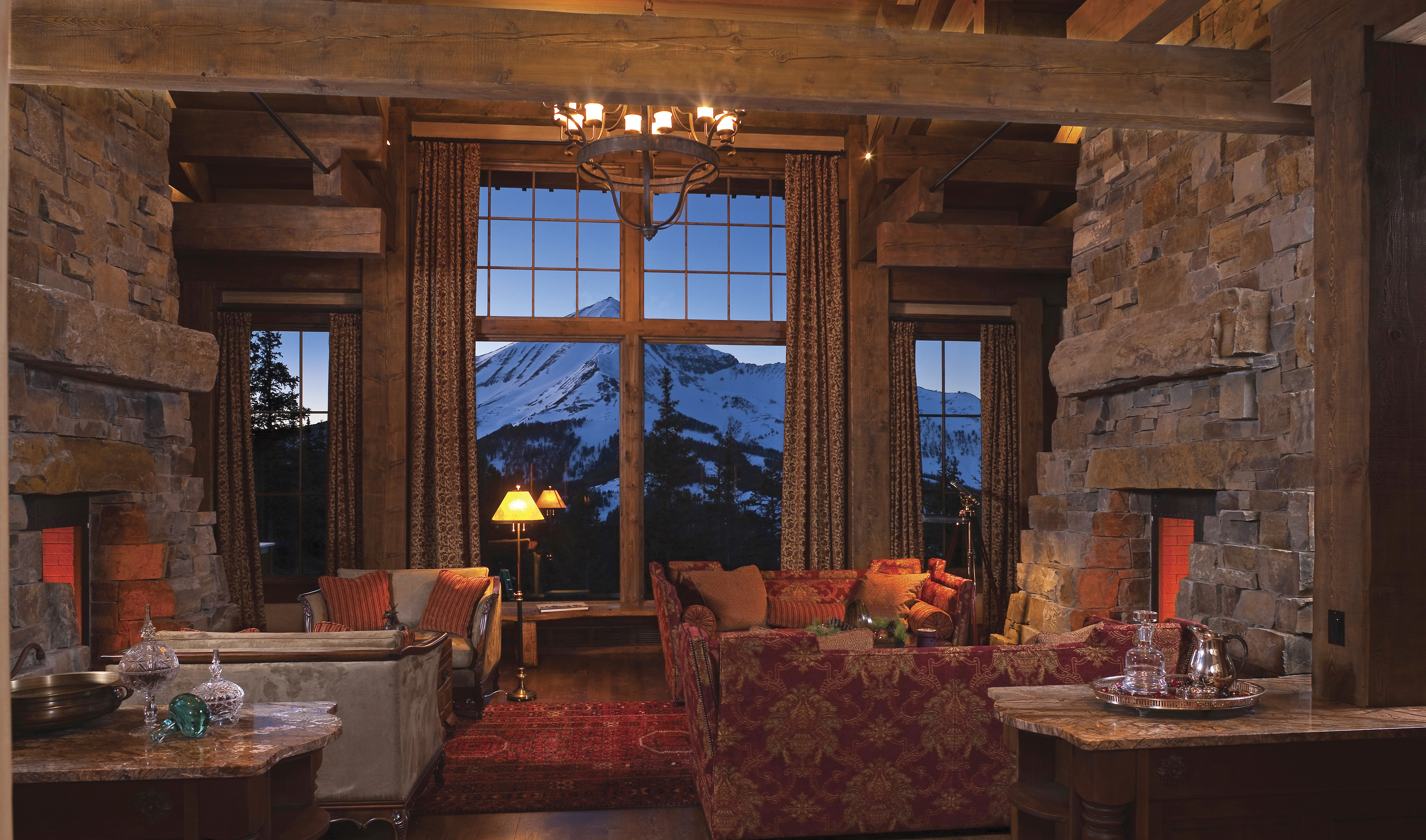