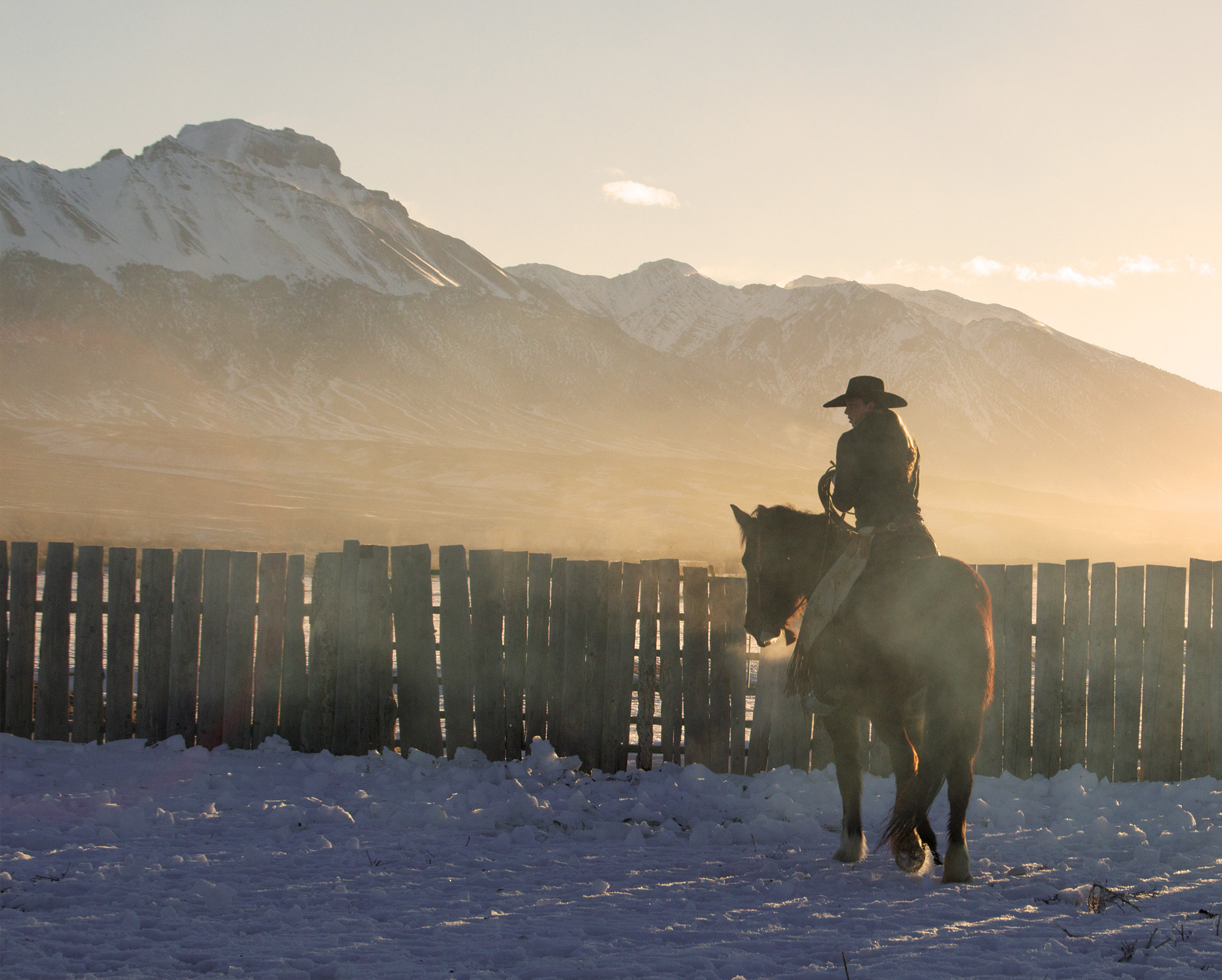 The February chill has started to lift when someone calls for more diesel on the fire. Bright orange flames jump out of the small woodpile and, along with the two cowgirls in yellow rain jackets, breaks the monochrome of the scene laid out before the dozen photographers who stand, kneel and lay flat before it.

They keep their lenses trained on the cowgirls while professional photographers Drew and Taylor Stoecklein shout out advice about camera settings and direct the ranch hands posed by the fire. The Stoeckleins pace behind the line of photographers, determined to provide each member of the group, which includes an eighth grader alongside professional cinematographers, with ample opportunity to capture the shot. They direct a cowboy in an orange raincoat to join the girls behind the fire. The girls ride their horses through the smoke-filled aspen grove. Drew asks the cowboy to mount his horse and join them, having them run through scene after scene before the soft morning light peters out. One cowgirl takes up behind the fire with rifle in hand; a cowboy joins her. More diesel on the fire. Move into the adjacent field, race horses. And then, full daylight. Time to pack it up and head back to the Bar Horseshoe Ranch.

The morning scenes are part of the first shoot of the first Stoecklein Photography Workshop of 2015, and the first not led by family patriarch and renowned Western photographer David Stoecklein. The National Cowboy Hall of Fame inductee died in the fall of 2014 at the age of 65 from complications after surgery, two years after he was diagnosed with terminal lung cancer and decades after turning his Bar Horseshoe Ranch, just outside Mackay, Idaho, into one of the top photo studios in the world. During his tenure, the ranch hosted shoots for Stetson, Marlboro, Wrangler and Pontiac among others.

All those commercial photo shoots kept David Stoecklein busy throughout his late 50s and early 60s. Through the 2000s, Drew tried to convince his father to host photo workshops at the ranch instead. It was less stressful than the commercial shoots, he argued. But it wasn’t until the Great Recession, when company cutbacks opened up the elder Stoecklein’s previously packed schedule, that he considered what Drew had pitched for years, says Mary Stoecklein, David’s wife. The Stoeckleins worked through the details and advertised the following year, welcoming the first group of 10 students to the ranch in February 2010. Each workshop consists of three photo shoots — two sunrises and one sunset — as local cowboys and cowgirls demonstrate ranch work like feeding cattle and branding calves. Students learn Stoecklein family tips on how to manage a shoot, what to look for and how to edit their photos using Lightroom software.

The ranch sits at the base of the Lost River Range, a dramatic and severe group of mountains that hold the highest peak in Idaho. David Stoecklein bought the ranch in the early 1980s as a getaway from Sun Valley, where he worked as a photographer for Smith Optics. As he got to know his neighbors — ranching families who had worked the valley since the early 1900s — Stoecklein developed an interest in capturing Western ranch life. He slowly changed the ranch’s focus from cattle to photography: placing a water spigot in the middle of a field not because it’s a good place to have a spigot, but because it’s the perfect angle to manufacture a rainy sunrise; locating a road cut to a distant knoll that provides the best angle for capturing the evening alpenglow on the Lost River mountains.

Over time the neighbors came to respect and admire Stoecklein’s work. When Stoecklein asked Brett Zollinger (whose family has owned a nearby ranch for nearly 100 years), and others in the valley to be in commercial shoots or to photograph cattle brandings, they agreed.

“He published a book, Idaho Cowboy, and I just seen it and thought that was pretty awesome,” Zollinger says. “I do what I do. But do I do it good enough to make people want to take note of it? That to me is a real honor.”

After the final shoot of the February workshop — a mock branding under a golden morning sun, with horses galloping before the mountains — and after the photographers select their favorite photos for the workshop-ending slideshow, everyone gathers at the modest log cabin for a rib dinner. But before the feast begins, Mary Stoecklein calls the group to the “dragon” outside. The dragon is a metal fire barrel with brands cut into the sides and a chimney that extends more than 6 feet high, pushing the smoke well above the gathered crowd. Mary says it was David’s favorite way to wind down the night.

“We’d all gather around and tell stories,” she recalls. “He was very proud of it and he just loved it. We thought we’d get everybody out here for the first workshop of the year and give a toast to him.”

Everyone raises a glass. The silence holds for a long moment, the group enveloped by warmth, as much from the flaming dragon as from everyone packed close together. As quickly as it appears, the silence leaves. Amid building laughter and conversation, all file inside to eat and drink and reminisce.

The Lost River Range looms as Mason McAfee and Tayler Teichert pin a calf for branding. 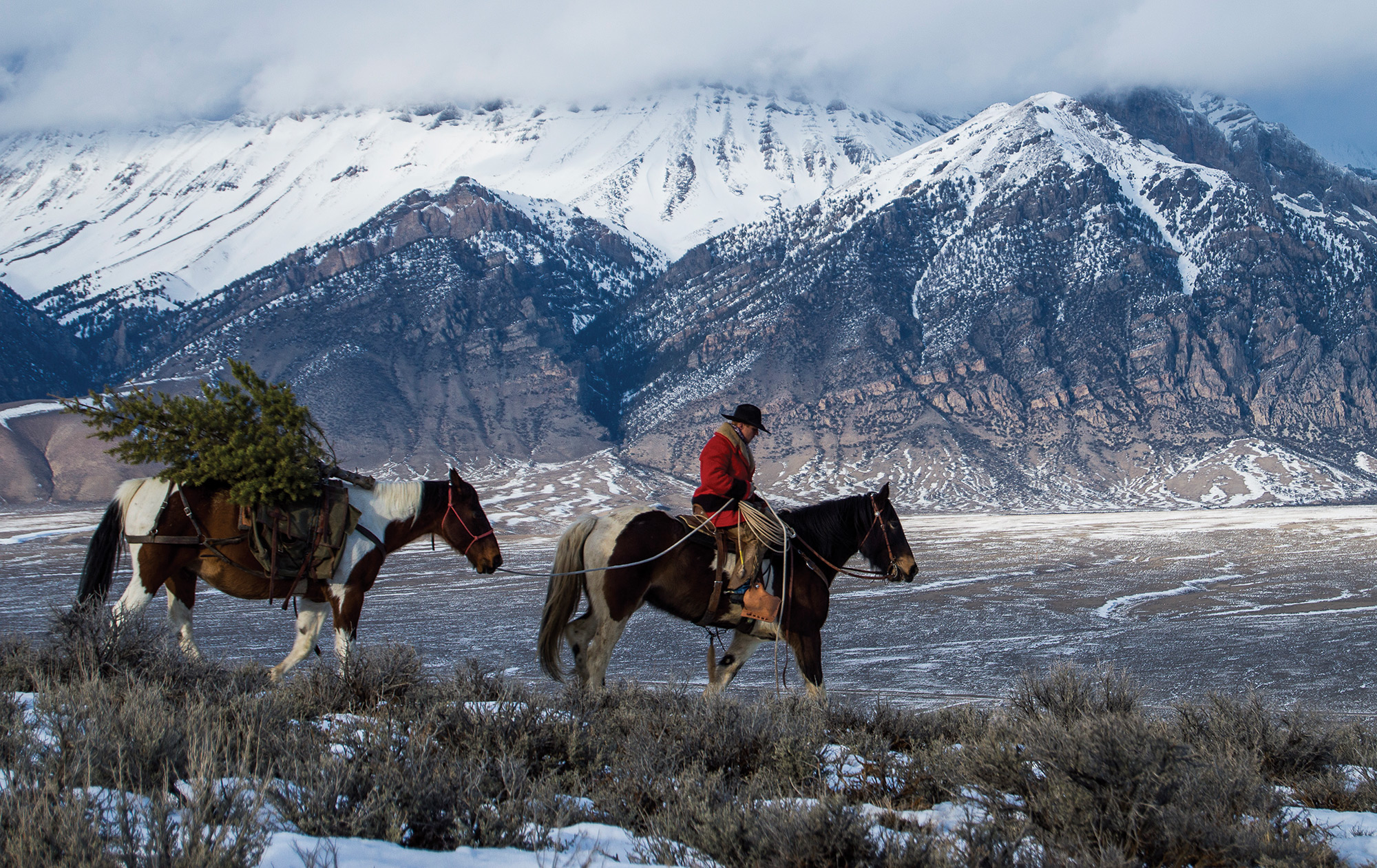 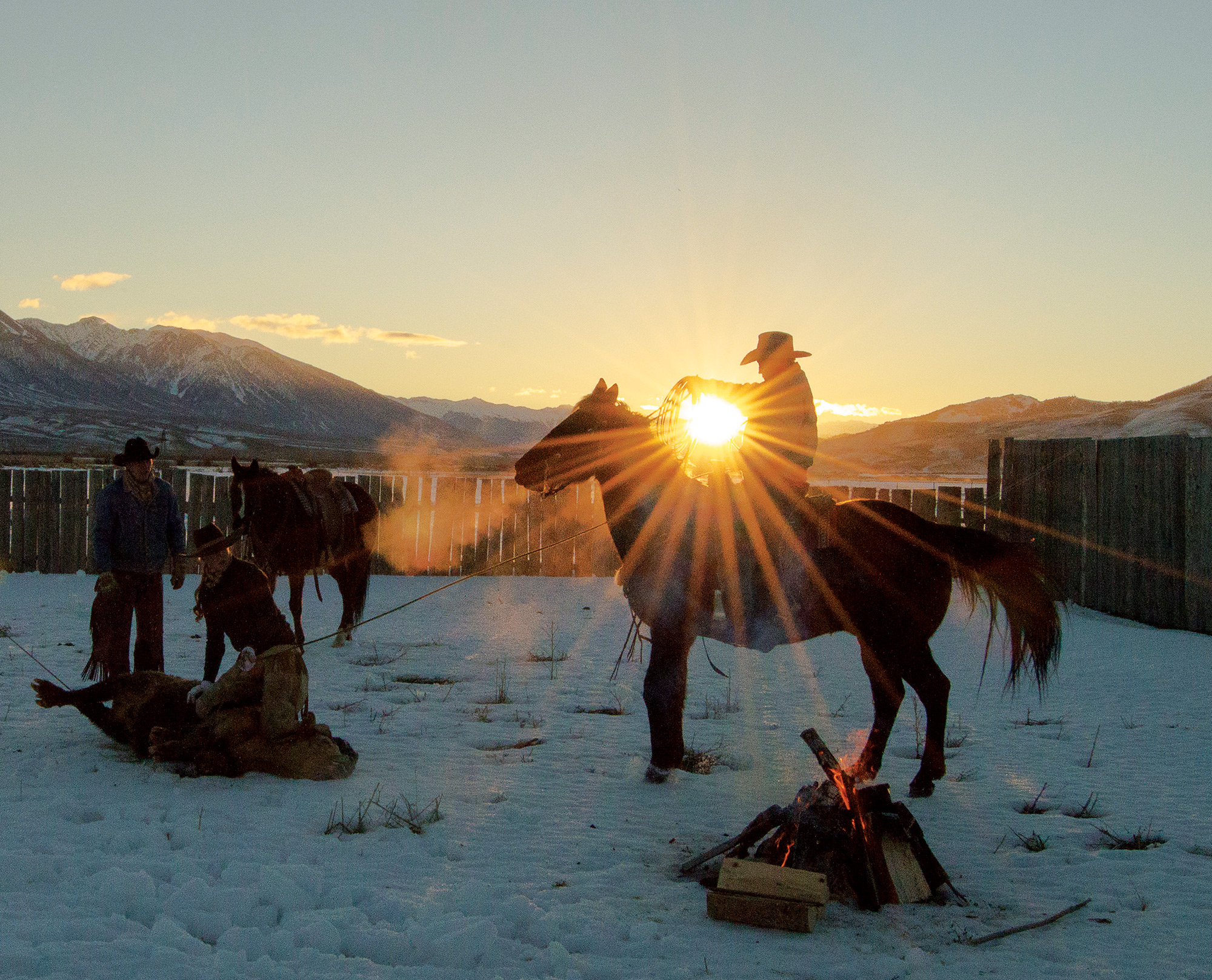 Tayler Teichert circles the corral at the Bar S Ranch on the last morning of the Stoecklein Photo Workshop.