Robertson studies the sheep-horn tip inlay on what he refers to as his “bow of a lifetime,” made from a single, exceptional piece of Montana yew wood.

Bows and arrows represent one of mankind’s earliest inventions. Archery artifacts from southern Africa date back as far as 60,000 years, and 10,000 years ago, Neolithic cultures were hunting and waging war with bows in every corner of the world except Australia, a remarkable example of parallel technological evolution. Despite developments such as the recurve bow — adapted for horseback warfare on the Asian Steppe — and composite bow construction — which increased arrow speed and cast (the distance a bow can shoot an arrow) — the bow’s basic design remained nothing more complicated than a stick and string.

Firearms eventually began to replace the bow as instruments of war. Historians identify the Battle of the Little Bighorn as the last military engagement in which bows played a significant role. By then, target archery had become a popular pastime among the British gentry, and it enjoyed the distinction of being one of the few field sports that also welcomed women to participate.

The resurgence of interest in the bow as a hunting tool, however, took place in the U.S., led by early pioneers such as Will and Maurice Thompson in Florida, and Saxton Pope and Art Young in California. Throughout these periods of transition, the bow remained the stick and string it had always been. 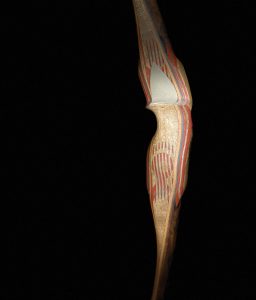 This recurve bow, made by custom bowyer Dick Robertson, features Pierce points, which are thin strips of wood incorporated into the handle.

That began to change in the 1960s with the development of the compound bow, which uses a complex system of cables and pulleys, making the device easier to aim and hold at full draw. The addition of sights, releases, and other modifications soon made it easy for beginners to shoot with an accuracy that once required years of practice to acquire, and compounds became ubiquitous during archery season, even though they bore little resemblance to the simple bows that had served human hunters for millennia.

Some archers, however, viewed these developments with skepticism and either returned to — or never abandoned — the simple bows they had always used, citing their light weight and reliability, the satisfaction of mastering them, and the sense of history that they evoke. Known collectively as “traditional” archers and bowhunters, their ranks grew as others began to appreciate these qualities. Nowhere was this retro movement stronger than in Montana, which became an epicenter for traditional archers and the craftsmen who made their bows, including Montana native Dick Robertson.

Born in Wolf Point in 1953, Robertson grew up bowhunting. It was in the 1970s that he became concerned about technology’s impact on archery and decided to start making his own bows. “Industry was trying to make archery and bowhunting easier,” he says. “I wanted to make it more challenging.” 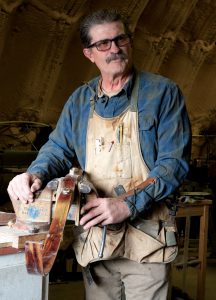 Robertson creates his custom bows in his shop in Forest Grove, Montana.

Robertson began by building bows in what is arguably their purest form: self-bows, which are one-piece, all-wood, and carved from a single stave. In a nod to history, he made his first ones from yew wood gathered in Oregon. (Military longbows in Robin Hood’s day were made from yew, and British archers used them to devastating effect against the French in the 1415 Battle of Agincourt.) By 1978, he had stopped working as a carpenter and was building bows full-time.

Yew can be tricky to work with, however, and many of Robertson’s early bows broke. These failures led him to start building laminated recurves and longbows, including models that broke down into two or three sections for ease of transport. He tinkered constantly with his limb design, and since he was always generous with his knowledge, other bowyers around the country began to adopt some of his innovations.

While Robertson enjoys working with locally sourced materials from his home state, he points out that Montana doesn’t have a large supply of the dense hardwoods needed to construct handles for heavy bows. He uses local wood when he can, however, especially Montana juniper, which makes exceptionally attractive bow limbs. In addition to hardwoods from elsewhere around the country, he utilizes tropical hardwoods such as African bubinga and Central American bocote in his bows’ handles. 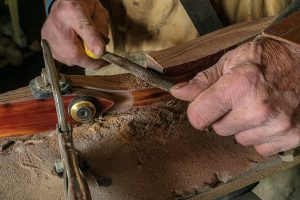 The bowyer roughs out the handle of a custom recurve bow.

Robertson’s craftsmanship and use of quality woods have always made his bows visually appealing, but he also enjoys adding a few extra touches to some custom models. Years ago, the Midwestern bowyer Jerry Pierce developed a unique means of joining thin strips of wood in the body of his bows’ handles. Pierce points, as they became known, require time and technique to construct, and Robertson is now one of the few bowyers to offer them. He also uses horn in his limb tips for added durability and visual appeal.

Despite his attention to aesthetics, Robertson’s bows are not just pretty specimens. Consistent with the function-is-beauty principle of design, these are meant to shoot at everything from paper targets to big game. While arrow speed is the most commonly accepted metric for defining performance, Robertson recognized that accuracy and the ability to shoot a heavy arrow matter more than arrow speed in the field, and he designed his bows accordingly. (Personally, I have used them to take game as large as moose, eland, brown bear, and Asiatic buffalo, often shooting arrows three times the weight most compounds can handle.)

In contrast to mass-produced compounds, each custom traditional bow is unique, reflecting the tastes and preferences of both the bowyer who made it and the archer who commissioned it. No two shoot exactly the same way, and many receive names as if they had joined the archer’s family. 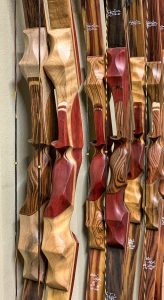 Robertson incorporates locally sourced wood into his custom bows as much as possible, and also uses hardwoods from Africa and Central America for custom touches.

I honestly don’t know how many Robertson bows I’ve owned and shot over the years, but I can recall a number of them affectionately by name. A 72-pound longbow named “Medved” (Russian for “bear”) anchored a large grizzly on a beach beside the Sea of Okhotsk. “Auction Fever,” a lovely 58-pound recurve with Pierce points, came my way during a wine-fueled bidding war at a bowhunting banquet. I carried “Wanasapi” (Sioux for “buffalo hunt”), a 90-pound monster of a recurve, when I was guiding Asiatic buffalo hunters in Australia, but I later donated it to a charitable cause when I realized I’d never be able to draw it again after a shoulder surgery. My wife Lori’s juniper-limbed “Knotty but Nice” has been putting venison in our freezer for 20 years. And that’s just a small sample from a long list.

I recently had an opportunity to ask Robertson a theoretical question: “If you were going to build one last bow to define your legacy as a bowyer, what would it be?” 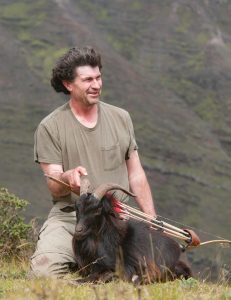 Robertson used his handmade bow to hunt feral goats in Hawaii, helping the local conservation managers address a problem with the population.

“I’ve already built it,” he replied. He then went on to describe how he found an extraordinary piece of yew in Southwestern Montana early in his career. Most yew from this area isn’t big enough to produce a one-piece longbow, but this was an exception. He and several other experienced bowyers studied the wood for months before starting to work on it, like diamond cutters trying to decide how best to approach an exceptional gemstone. Robertson finally worked up his nerve and got the rough stave to release the 74-inch self-bow hidden inside.

This simple bow still lives at the Robertson house — a functional tool, a work of art, and a testimonial to the traditions of a simpler time, one that is disappearing faster than many of us would like.