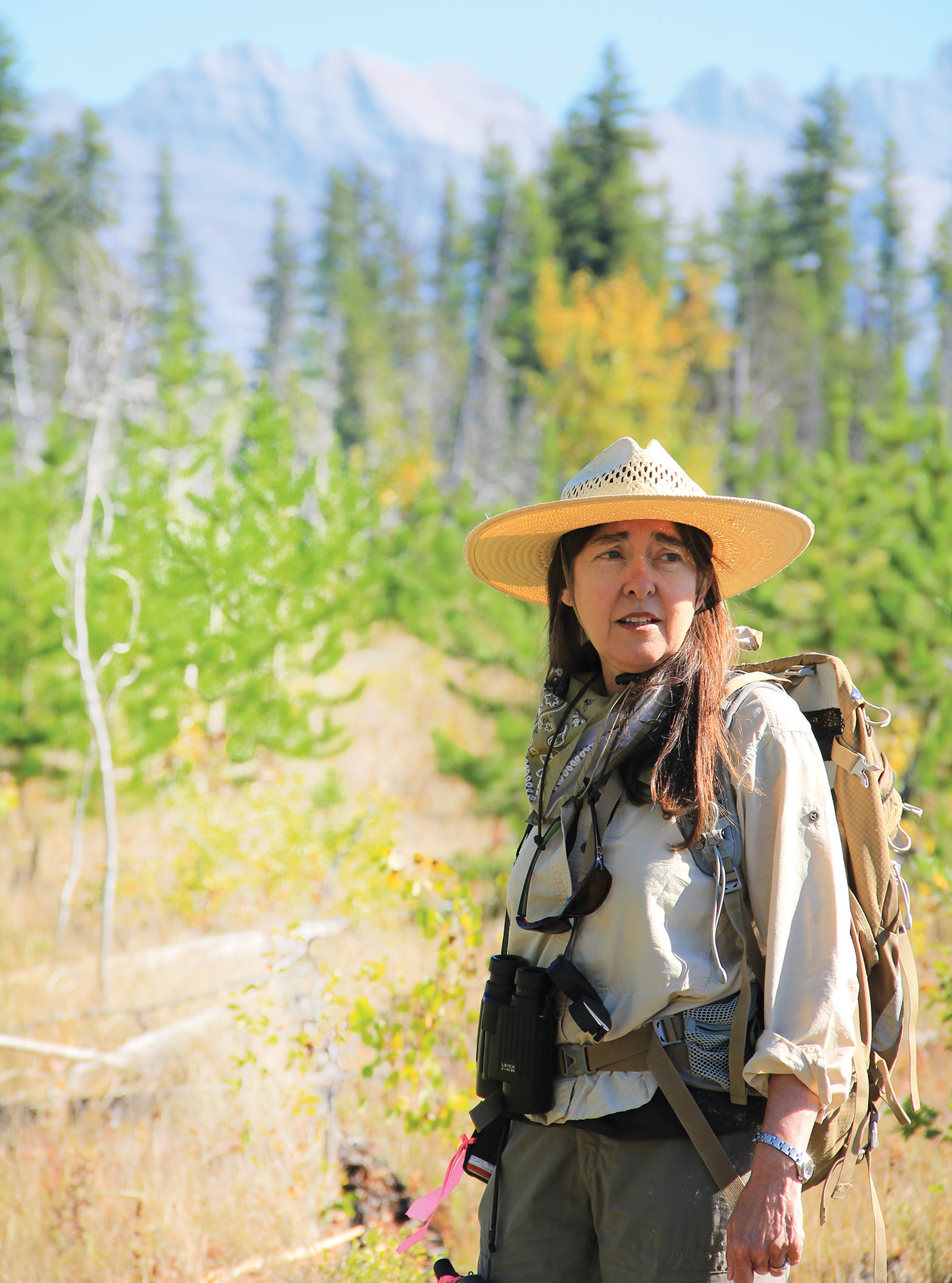 Cristina Eisenberg looks sternly at the clacking, hyperventilating, young grizzly bear who is aggressively following her and her research crew on the Wishbone trail in Canada’s Waterton Lakes National Park. In a sharp tone, she commands it to “Stay put!” Naturally, the bear sits down with a sad, confused look on its face.

Upon first meeting Eisenberg, one is struck by her gentle spirit, soft voice and energy that seems to flow from an unending wellspring. But I also understand why that bear on the trail listened. There is a fierceness inside this woman, and it is rooted deep in the wild lands of Montana.

The day after this bear incident, the park has closed the trail while the bear cools its head. It’s the final day of an important summer research project focused on how two forces of nature — wolves and fire — shape the landscape. I follow Eisenberg and her research crew down the same trail, but our lead hiker is a now a Canadian Mountie with a high-powered rifle. The irony glinting from the gun barrel is that Eisenberg’s life’s work is to show the world how predators like this grumpy grizzly are essential to healthy ecosystems.

Here in Waterton, recent controlled burns have simulated the effects of naturally occurring wildfires. Tender, young aspens grow after the fire and lure elk, which gobble up the shoots and clear space for native grasses to grow. But with the comeback of wolves in the Park, there is a new factor in the equation. Why aren’t the elk mowing down the aspen shoots as expected? This is what Eisenberg calls the “ecology of fear.” On the lookout for wolves, the elk are skittish and don’t linger as they eat, leaving the little shoots to grow into mature aspen.

“Wildfire and wolves are forces of nature that were present for millennia and humans got rid of them because they were inconvenient,” says Eisenberg. “With their return, the whole system is now burgeoning with life — bears, wolves, songbirds, wildflowers like crazy — just seven weeks after it was black earth. Now it is so alive!”

Wolves are one of the “keystone” predators Eisenberg has her wide eyes on, a species that has a major effect on the environment even in small numbers.

“When I think of the keystone roles of top predators in wildlife communities and cascading ecological impacts, I think of the critical central stones at the top of an arch, joining the two sides,” says Douglas H. Chadwick, a wildlife biologist, author and regular contributor of features for National Geographic.

Like Chadwick’s compelling nature writing, Eisenberg’s storytelling style has helped bring scientific research into the public eye. “Cristina’s work has been an important part of wolf recovery and understanding the big picture,” says Doug Smith, senior wildlife biologist at Yellowstone National Park. “She writes in a way that the public can understand, and that is her special touch. She has really been able to popularize the idea of trophic cascades and wolf ecosystem effects.”

In her first book, The Wolf’s Tooth (Island Press, 2010), she explored the concept of “trophic cascades” and the role of top predators in regulating ecosystems. In her latest book, The Carnivore Way (Island Press, 2014), she argues for the necessity of top predators in large, undisturbed landscapes, and how a continental-long connected corridor provides the room they need to roam and disperse.

Research and intense statistical analysis are at the heart of her work — she’ll crunch 36 statistical models with 32 variables using pages of computer code while she sips coffee. But telling stories from her heart is how she hopes to share the wonder of her research with readers about the importance of an intact world and creating better relationships between humans and nature.

“I am passionate about science,” she says. “But I am a natural history writer at heart. I want to leave behind stories that will help people better understand how they can make a difference to create a more sustainable world.”

At 59 years old, Eisenberg is coming full-force into her exploding career. After leaving California and moving to a remote cabin in the forest near Bigfork in 1994, she learned profound lessons about the ecological and personal value of wildness simply by observing the flora and fauna outside her back door.

“Montana wrapped its arms around me,” she says, recalling the wonder she felt after a road trip with her baby daughters to find a new home. After that 7,500-mile drive, she called her husband, Steve, to tell him she had found the perfect spot to raise their two girls. Steve believed her.

As wolves returned to the remote corner of Montana that Eisenberg now called home, she became so curious about the natural world around her that as her daughters grew up, she asked herself what she wanted to do next. She enrolled in a master’s degree program at Prescott College in Arizona, publishing a thesis on wolf conservation and recovery that evolved into her first book. She earned her doctorate degree in 2012 from Oregon State University, studying food web relationships involving fire, wolves, elk and forest ecosystems.

In a relatively short span of time, Eisenberg’s career has literally gone wild, with invitations coming in from all over the world. This fall she has speaking engagements at universities including Oxford and Harvard, and research facilities such as the American Museum of Natural History in New York and the California Academy of Sciences. She will read from her new book in Missoula, Bozeman, Whitefish and Seattle. This is all while being an Earthwatch scientist, Smithsonian research associate and faculty at Oregon State University, where for several years she has taught ecological restoration and public policy. So it’s no surprise that she works 100 hours a week and feels the pressure of time.

“I was a housewife with kids before all this,” she says. “I never could have imagined what has happened, but one thing led to another.”

Climate change has gripped her now and will be the subject of her next book, with research trips forthcoming in the Amazon and the Arctic.

“I can’t think of anything more important to write about,” she says. “Climate change will dominate our discourse moving forward. I am maturing as a scientist and learning the global context for my work, drawing from the bigger context to ask larger questions.”

A year after my first research trip with Eisenberg in Waterton, I am with her in Glacier National Park’s remote North Fork, looking for wolf pup pack signs at “rendezvous sites” — resting places where older wolves teach young wolves how to be wolves. It’s like a “nursery for young wolf pups,” Eisenberg explains in her usual down-to-earth manner.

We are here looking for clues that give Eisenberg an idea of the packs’ health. The blackened snags of the Red Bench Fire of 1988 point to the sky on this gorgeous autumn day. Morning mist curls up from the river valley.

Eisenberg  seems to have a sixth sense in locating wolf scat and it feels like I am on a treasure hunt, both in finding the scat, and then when we dissect it. She stands over a pile of scat with a stick, uncovering ungulate teeth and bone in the white, chalky feces, likely elk calf or some other young animal.

The smell of pennyroyal and the duff of the forest permeates my nostrils, and the energy feels electric as I imagine the wolves playing, being taught to hunt. This is the closest I have ever been to seeing a wolf, and it feels magical, just sensing their presence.

“This is a place you go into with respect,” she says seriously, with her wide eyes looking straight at me. “We don’t barge in. This is wolf paradise. The last time a human walked here was probably the last time I was here. Glacier has the most intact wolf population and is the last best place to be a wolf. Let’s leave it that way.”

Unlike the “ambassador wolves” of Yellowstone National Park, which were reintroduced in 1995 and have become habituated to humans, the wolves of Glacier live very private lives. Glacier is also special because it still has all 16 species of carnivores that were present when Lewis and Clark explored near here.

Eisenberg breathes in deeply. “I am always in a state of wonder when I am working in a place like this that is so intact.”

As we explore a new site, we find a latrine area with lots of wolf scat and the acrid scent of urine. There is a large pile of scat at the entrance, the sign of an alpha male making his mark. We find the bones of an elk calf hoof and a large antler rack gnawed dull at the point — a wolf puppy chew toy.

“I see [signs of] at least three adults and two pups here — and in general a lot more wolf activity than last year,” she says. I close my eyes, imagining the wolves here in the “Crown of the Continent,” this mosaic of private and public lands that extends from Highwood Pass north of Banff all the way down to Missoula, from the Blackfoot River east, all the way west to near the Idaho border.

“The crown is a big wild chunk of land — a crazy quilt of mountains that converge in the North Fork and Waterton. My study site is the heart of the Crown of the Continent, the heart of wildness,” Eisenberg offers.

With the work Eisenberg and other eminent scientists are doing, the mountains of Montana have become a crucible for large carnivore conservation. The lessons learned here are looked at by other countries with keen interest. This month she will fly overseas for a talk with the Royal Geographic Society of London and Earthwatch on restoring natural ecological processes in the UK.

“Consideration of top predators in these keystone roles is extremely important,” reiterates Chadwick. “We tend to work on century-old formulas for wildlife and have always focused on single species and simplified relationships. Cristina’s work points us toward the complexity and that old truism that everything is tied to everything else. And I don’t think that message can be repeated too often.”

As the climate continues to warm, Eisenberg is emphatic that the wilder the system, the more resilient it will be.

“We are trying to rewild the planet,” she says, using a term coined by one of her mentors, Michael Soulé. “And you need predation to create a more resilient ecosystem.” 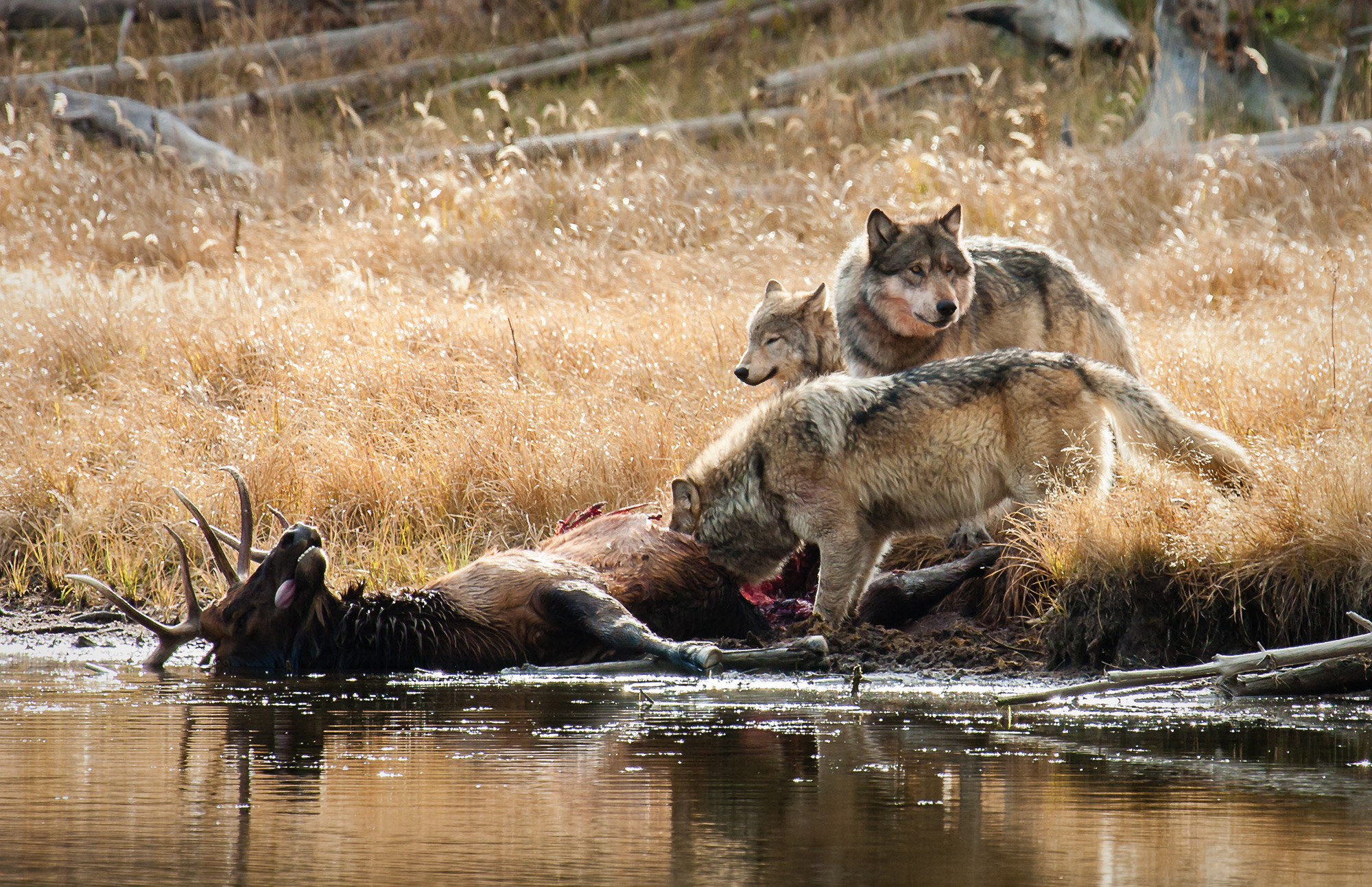 Wolves on an elk kill in Yellowstone National Park where Eisenberg also teaches for the Yellowstone Association. Photo by Karl Krieger 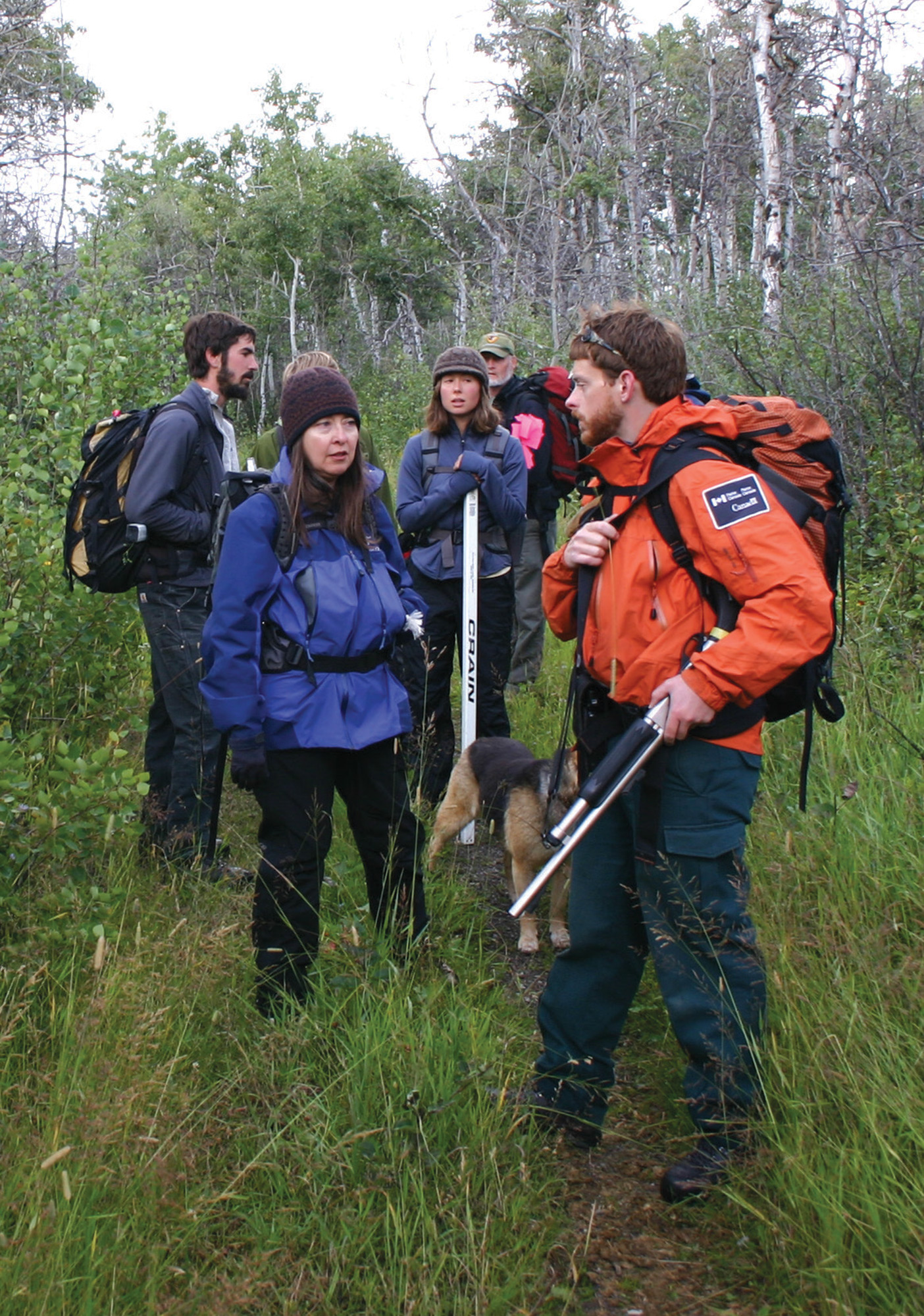 Eisenberg and her field crew in Waterton National Park with a Parks Canada escort. Photo by Brian Schott 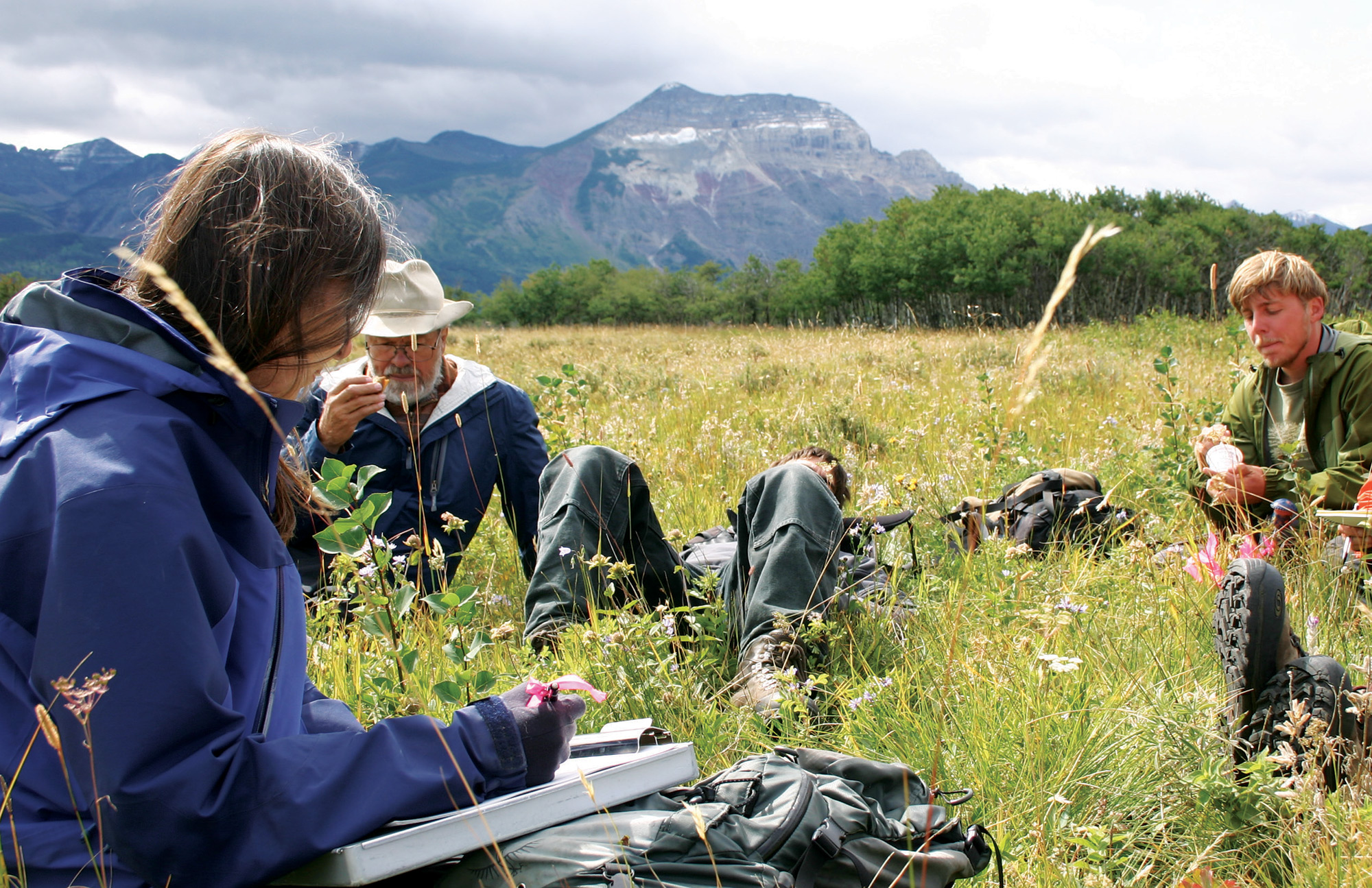 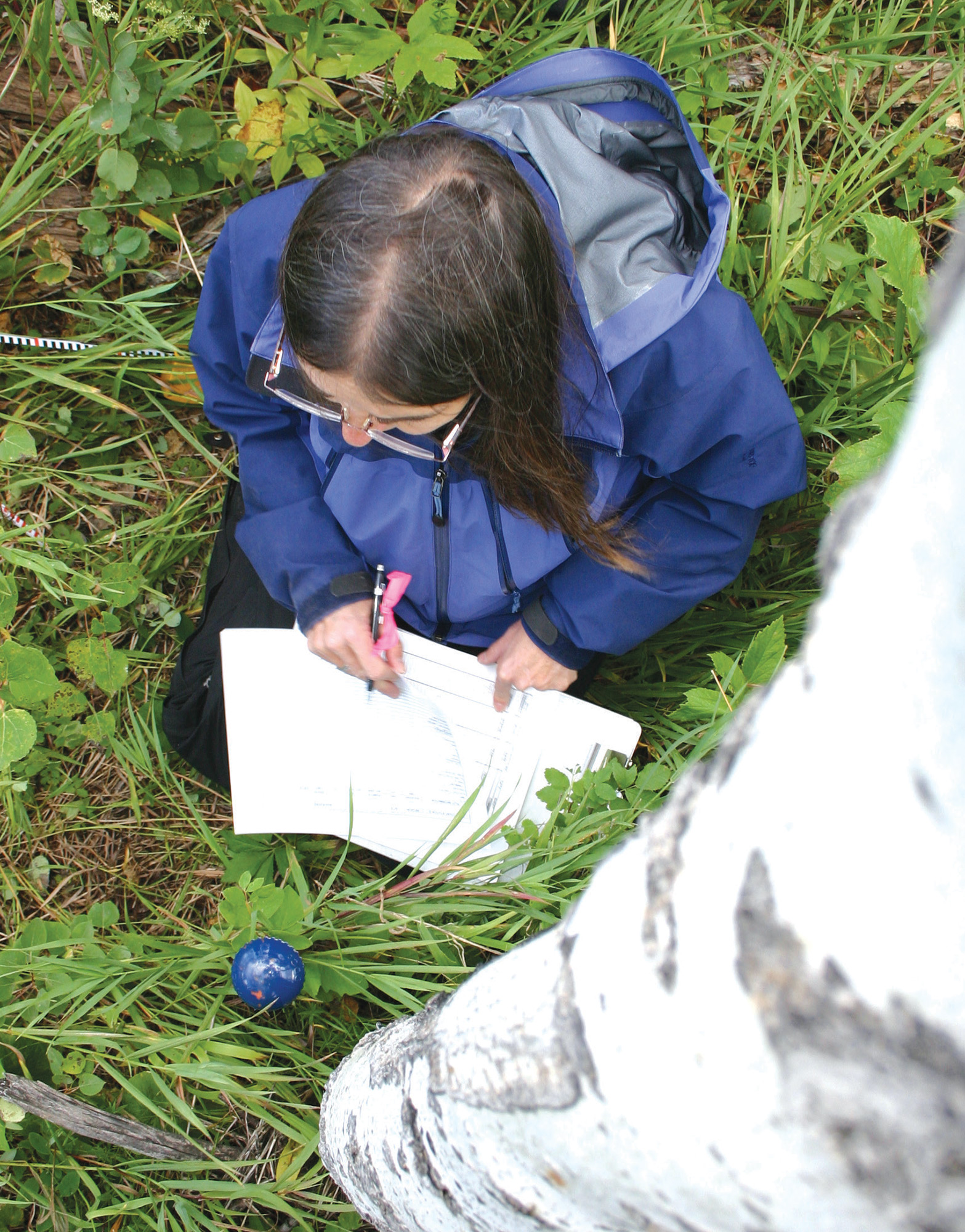 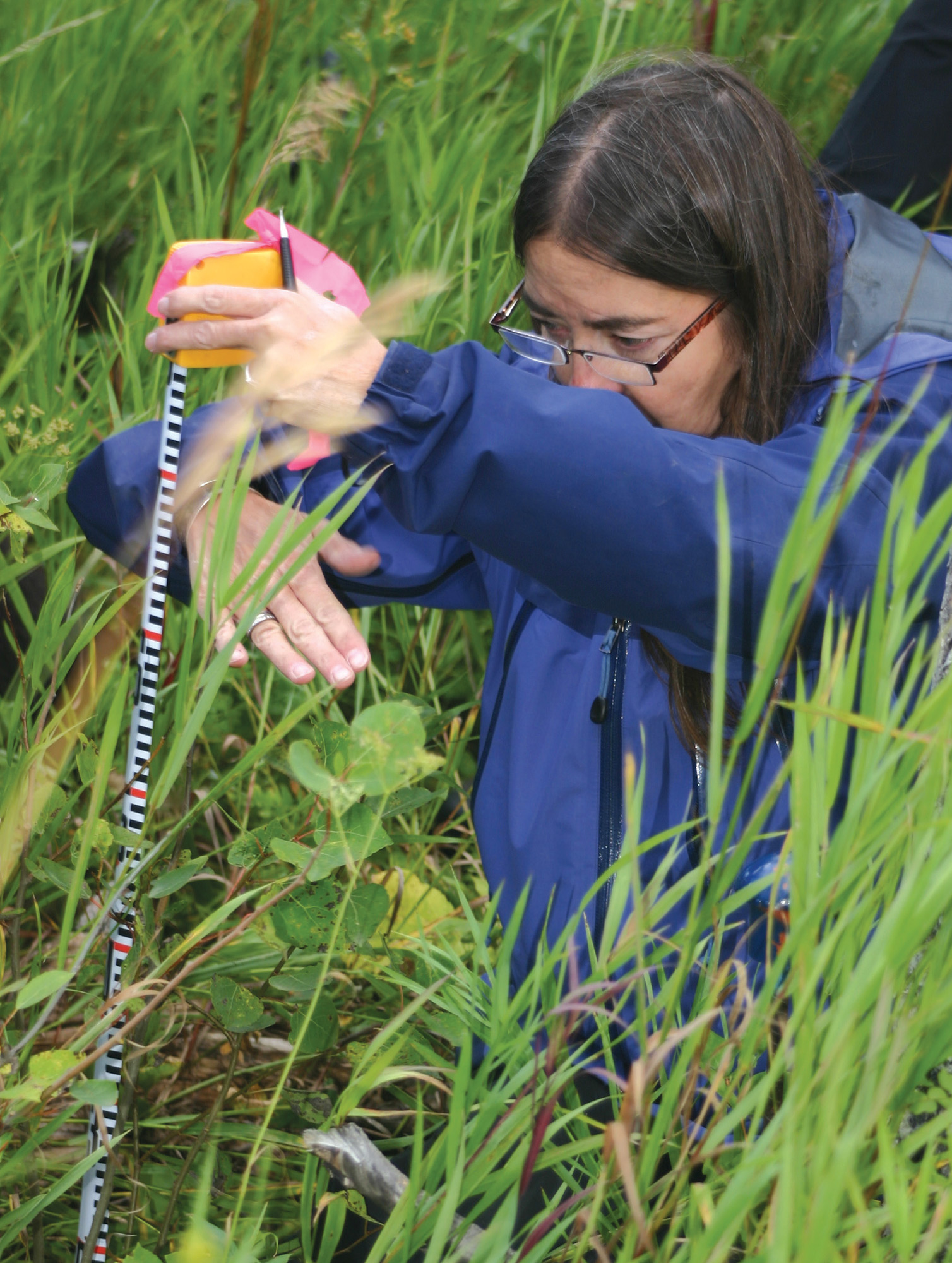 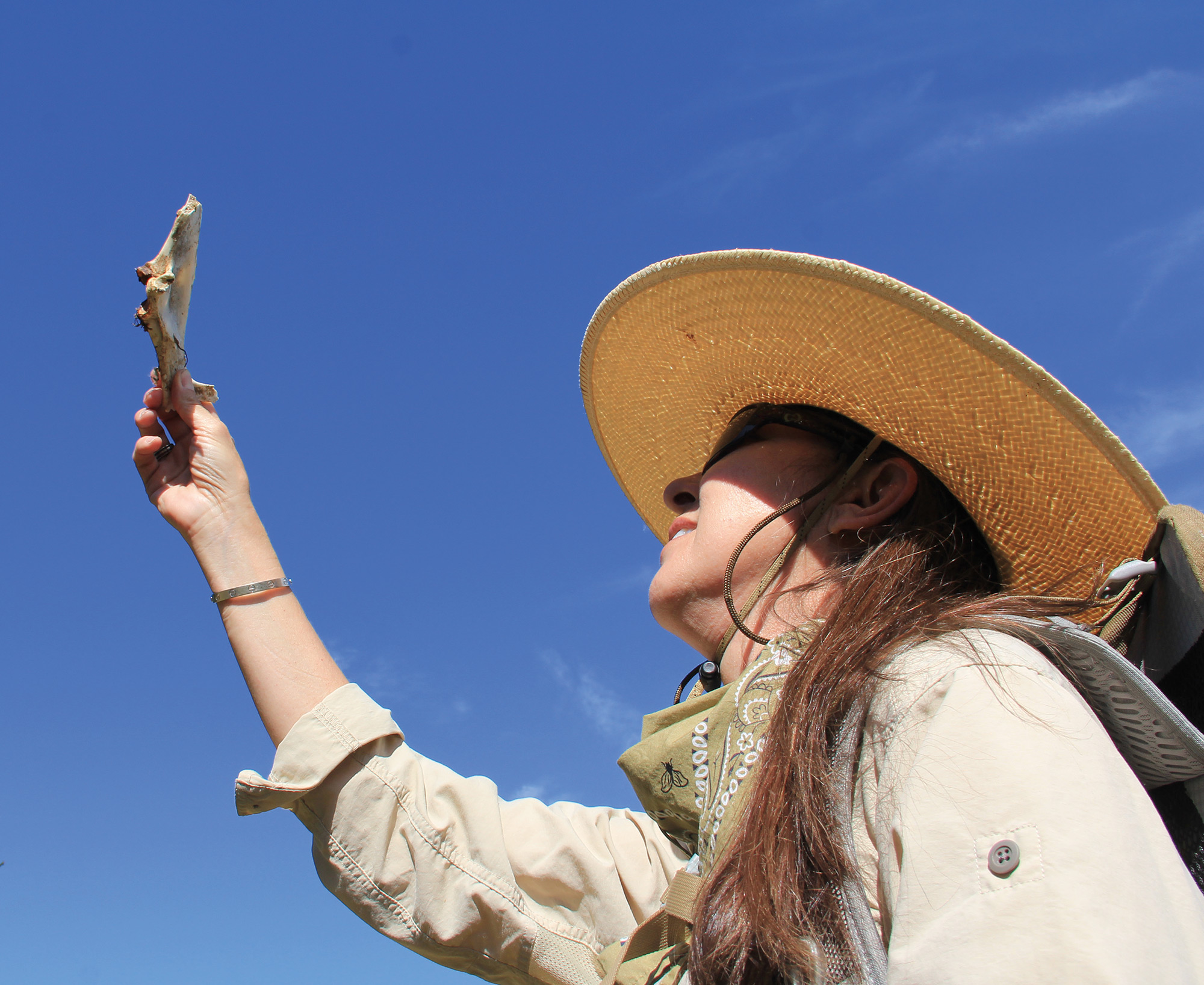