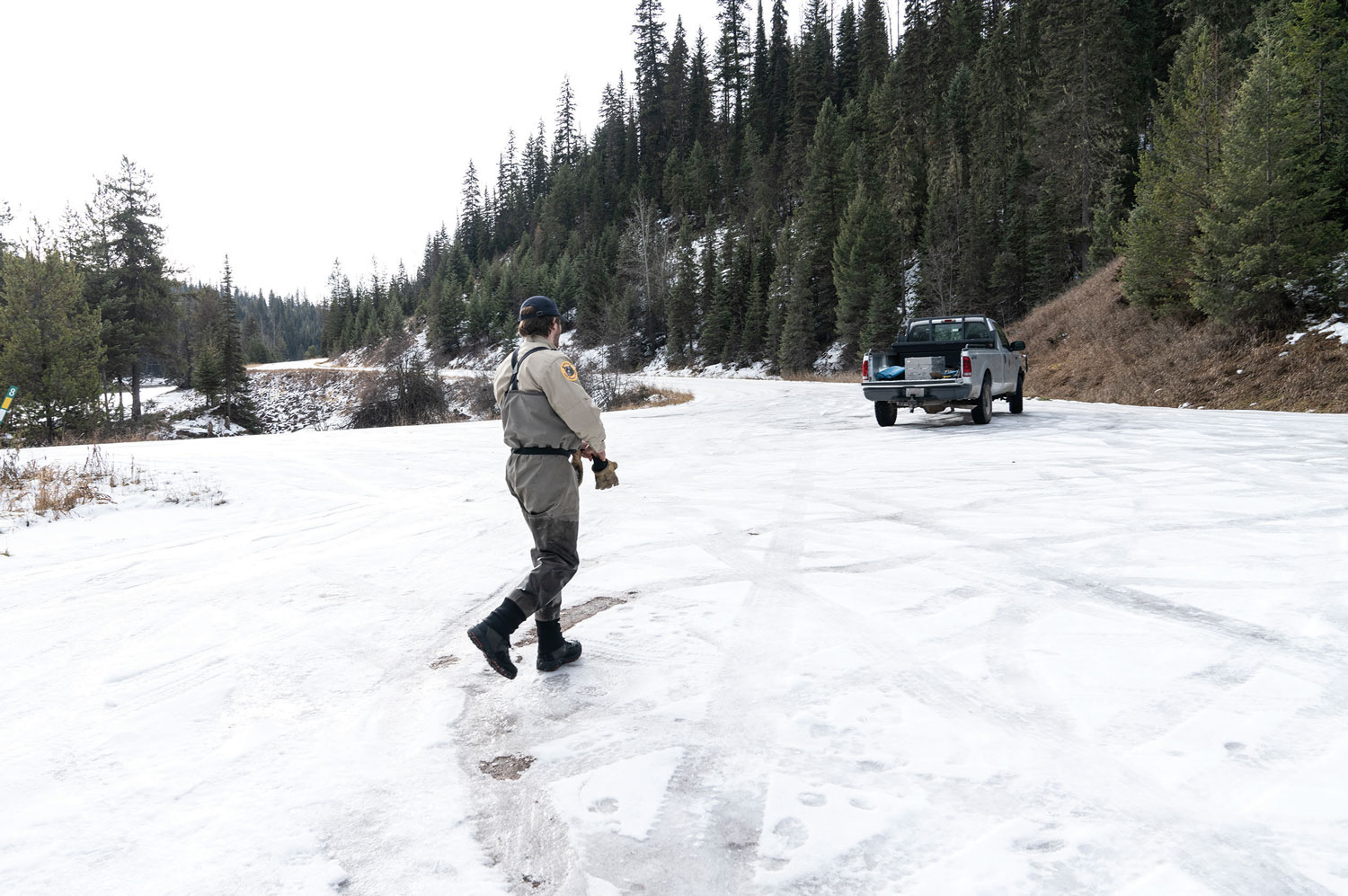 Fish biologist Sam Bourret prepares for work at the field site on Emery Creek, a small tributary that flows into Hungry Horse Reservoir.

Growing up in Bristol, Connecticut, Sam Bourret loved to fish. He angled for bass and striped bass, and even dabbled in fly fishing. “I was always an avid fisherman,” Bourret says, “and I always wanted to fish out West.” 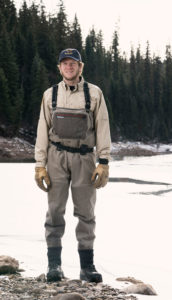 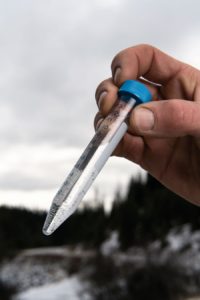 A water sample can reveal the distinctive chemical makeup of Emery Creek.

After finishing college at the University of Connecticut, Bourret moved west for a job with Wyoming Game & Fish. Not long after, he studied salmon life migrations in graduate school at the University of Idaho and continued to follow his passion, casting his rod around the West and South America.

That was Bourret’s life up until recently. But it all changed when he came up with an innovative concept, one that has the potential to alter Montana’s lakes and streams. It was then that he broke out as a fish detective of sorts.

Fast forward to 2018, and Bourret is a fisheries biologist with Montana Fish, Wildlife, & Parks in the Kalispell office. He’s made Montana home and realized his dream of fishing much of the West. His job now is to conserve native species and restore their populations. 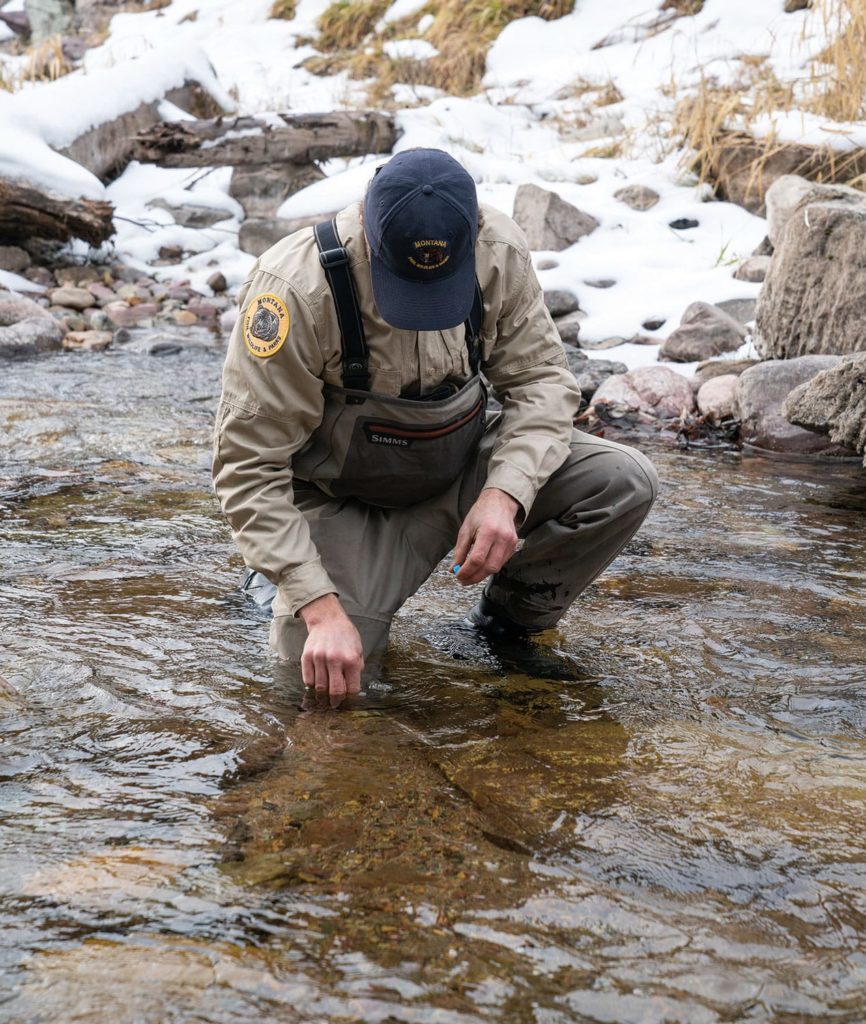 Bourret works on illegal fish introductions, as well as other fish-related conservation issues, and recently gained acclaim for his pioneering research into using otoliths (the inner ear of the fish) to determine where a fish came from. From the Flathead Beacon to National Geographic, Bourret has been lauded as a “fish detective” for his use of forensics to determine if particular fish are native to a lake or stream. How did he solve this piscatorial mystery? It all goes back to those otoliths. 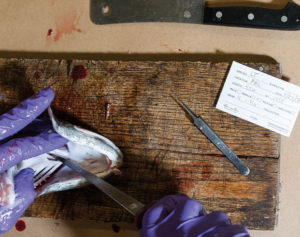 Otoliths are used for hearing and balance in fish, and using them to determine age is a common practice for scientists. The bone grows to about 1 inch wide and can be cut in half to expose tree ring-like circles; count the rings, and you can tell a fish’s age.

These inner ear bones are made of calcium, but when fish are in water with the naturally-occurring chemical elementstrontium, the strontium replaces calcium in the otolith in the same ratio that it is found in the water. A fish’s otolith should have the same geochemical profile as the water in which it lives. Different bodies of water have different profiles, so when scientists match the calcium/strontium ratio in an otolith with the same ratio in a water profile, they know the fish came from that body of water. 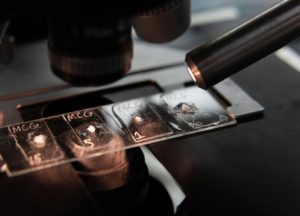 The chemical properties of otoliths have been known for 10 to 15 years. It was Bourret’s adviser, Brian Kennedy, at the University of Idaho, who was the first to determine the significance of the calcium/strontium ratio. Bourret worked with Kennedy on a project to study salmon on the Willamette River. Because salmon swim from river to ocean and back, the rings of their otoliths fluctuate chemically.

In 2015, Bourret was using gill nets to capture illegally introduced lake trout in Swan Lake in Northwestern Montana, when he and his team instead caught two walleye. He analyzed the fish’s otoliths and came up with surprising results: The walleye were not from around there. 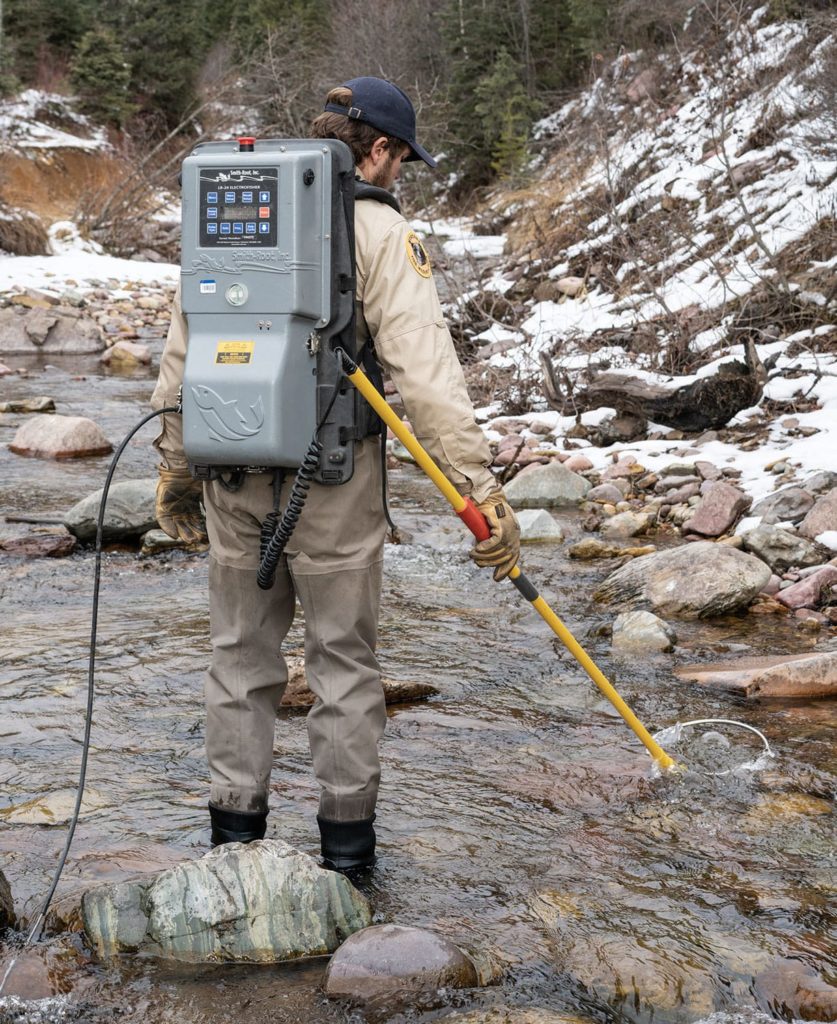 The idea to use clues in the walleye’s otoliths came to Bourret when he recalled studying salmon in the Willamette River. “I didn’t know it would work for sure, but I assumed if the walleye were born there [in Swan Lake], the otoliths would look like lake trout otoliths.” Because lake trout migrate from lake to river, their otoliths look similar to spawning salmon. In fact, the walleye otoliths didn’t look anything like the lake trout’s.

Part of the mystery was solved — biologists knew where the walleye came from, but they still don’t know who the perpetrator was, nor their motivation. Bourret thinks maybe someone who wanted to fish closer to home — walleye are great for eating — stuck a couple of fish in a bucket and drove them to Swan Lake. 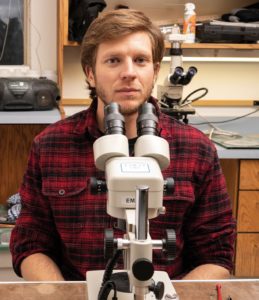 In the lab, Bourret studies the geochemical makeup of fish otoliths to deter- mine their native body of water.

Bourret’s innovative research on the walleye was covered in the November 2018 edition of the Canadian Journal of Fisheries and Aquatic Sciences, which is published by the NRC Research Press, the largest scientific publisher in Canada. Niall G. Clancy, a graduate student at Utah State University, co-authored the paper with Bourret.

Swan Lake provides critical habitat for threatened bull trout and native westslope cutthroat trout. Walleye are aggressive fish that can outcompete the more timid native species. Bourret’s job now is to work on native species conservation and restoration. Knowing where illegally introduced fish come from can assist in those efforts. No other walleye have been caught in Swan Lake, so it looks like the illegal introduction didn’t take.

For conservation efforts, scientists need to know more than just where the fish came from; they need to know how to stop the introductions. “The enforcement division is interested in figuring out who brought the walleye to Swan Lake,” Bourret says.

And with Bourret’s discoveries, they are one step closer to having that mystery solved.