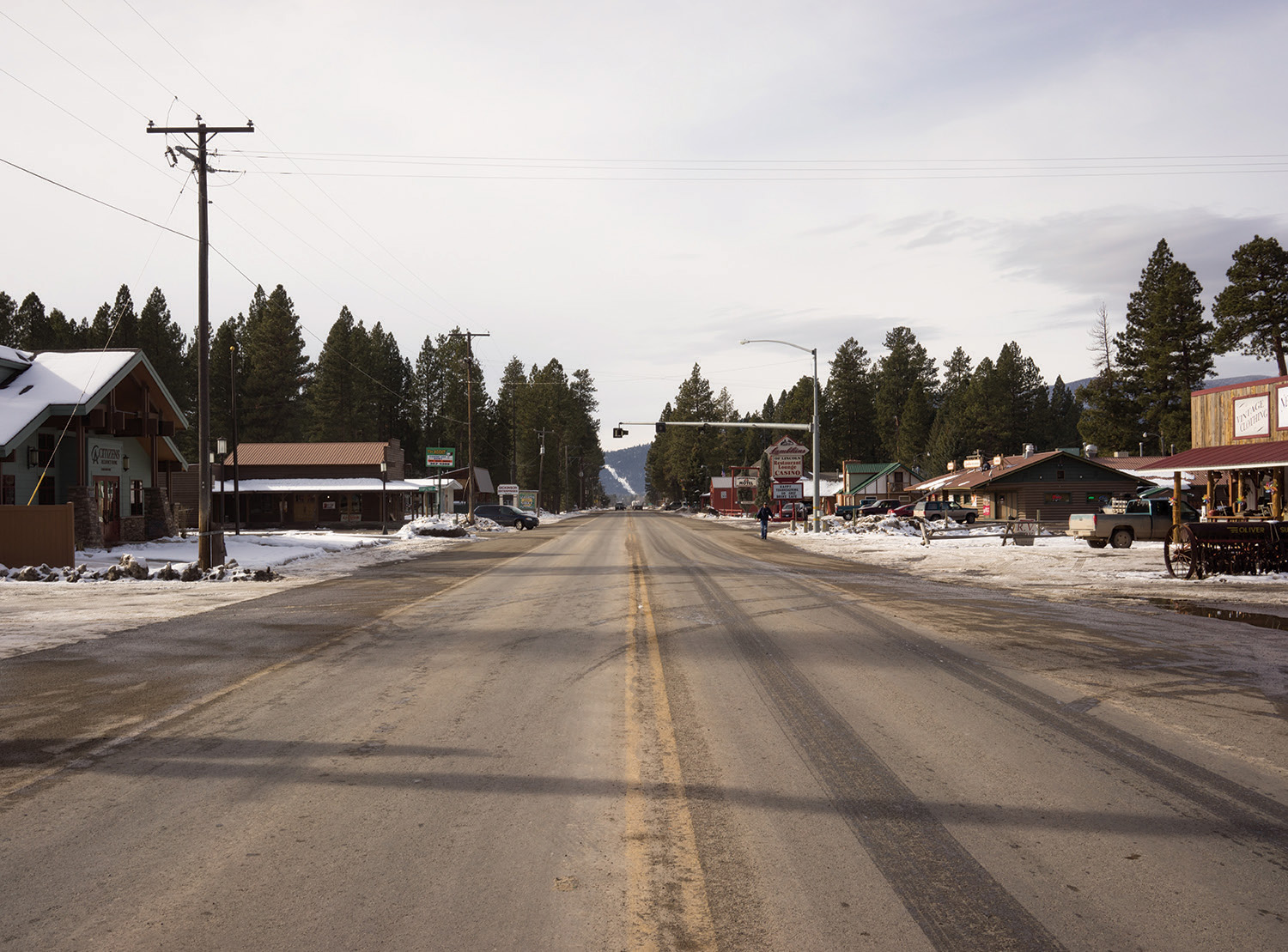 Montana Highway 200 is Lincoln’s main traffic route. Had Roos and other dedicated conservationists been unsuccessful in stopping the Mike Horse Mine, the main drag would look drastically different.

As anglers, many of us have moments that define us — be it a first fish on a fly rod, bringing a steelhead, permit, or tigerfish to hand, or playing a part in your child’s first caught fish. I’ve been blessed with several of these moments. My first one came more than 20 years ago, during a day I spent guiding outfitter and conservationist Paul Roos.

I was 24, and trying out for my first major league guiding gig. We were on the Blackfoot River in early June. Roos had picked an off-the-radar float and, as I launched the Avon Drifter raft, he said, laughing, “There aren’t a lot of fish on this stretch, and I usually don’t fish it. It’s pretty muddy now, too.” My heart sank. I wanted a guiding job, but even more than that, I wanted to impress Roos, whose reputation as an outfitter and conservationist was well known around the state. But I was afraid this wasn’t going to go well. 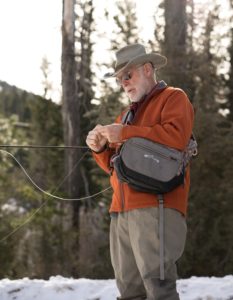 A lifetime spent protecting the Blackfoot River is embodied in a quiet moment as Paul Roos chooses the right fly for an afternoon on the river near his home in Lincoln, Montana.

One of the foremost outfitters and fly-fishing conservationists in Montana, Roos spent his childhood on the creeks and in the woods near Lincoln, Montana. He started guiding the Blackfoot in 1970, when he moved with his wife, Kay, and three daughters from Helena back to Lincoln to open The Roost Cabins. A fourth daughter was born a few years later. At the time, the Blackfoot was being stocked with fish (primarily rainbow trout), and the river was a put-and-take fishery. When fish stocking ceased in the late 1970s, the wild fish did not return, which was not the case with most other rivers and streams in Montana. Downstream, fish were migrating into ditches, and the river suffered from periodic dewatering, sedimentation due to logging, overfishing, road building in tributaries, and a legacy of mining. And compounding the fish population problems, mining interests were again threatening an impact on the Blackfoot’s headwaters.

In the early 1970s, when the Anaconda Copper Mining Company proposed to reopen the Mike Horse Mine on the upper Blackfoot, Roos’ livelihood was threatened. There was strong, local support for the mine, but Roos — along with Cecil Garland, a native of Lincoln and prime mover in the creation of the Scapegoat Wilderness — resisted the giant. Among a lifetime’s worth of other conservation accomplishments, their successful stand against Anaconda Copper looms large. 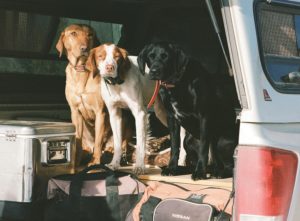 When not in his study or championing a cause, Roos relishes hunting with his four-legged companions.

But Roos tends to deflect praise. “A conservationist,” he said as we took a walk outside his home in Lincoln, the mountains dusted with winter’s first snow, “is someone who can see beyond the end of his or her nose …” One of his hunting dogs interrupted with a yelp, annoyed that my presence was delaying the afternoon hunt. Roos ignored him, and continued, “And cares about what they see happening. Cares enough to act on it.”

About his own past, Roos said, “I always wanted to be an outfitter, but I was smart enough to know that horses eat all winter long. For a new outfitter they’re dangerous and expensive.” Before setting up his own business, Roos had worked during summer breaks for Pat Barnes, an early conservationist and one of Montana’s first licensed fishing outfitters. “Pat turned me onto fishing outfitting and taught me that conservation and good business go hand-in-hand.”

But it was Roos’ father who cemented the conservation ethic. When Roos was a boy, his father was driving him to a favorite fishing hole on the Blackfoot. They saw litter fly from a passing vehicle. Roos’ father stopped their car, picked up the trash, and followed the other vehicle back into Lincoln. He presented the litter to the driver. “I think you dropped this,” he said. 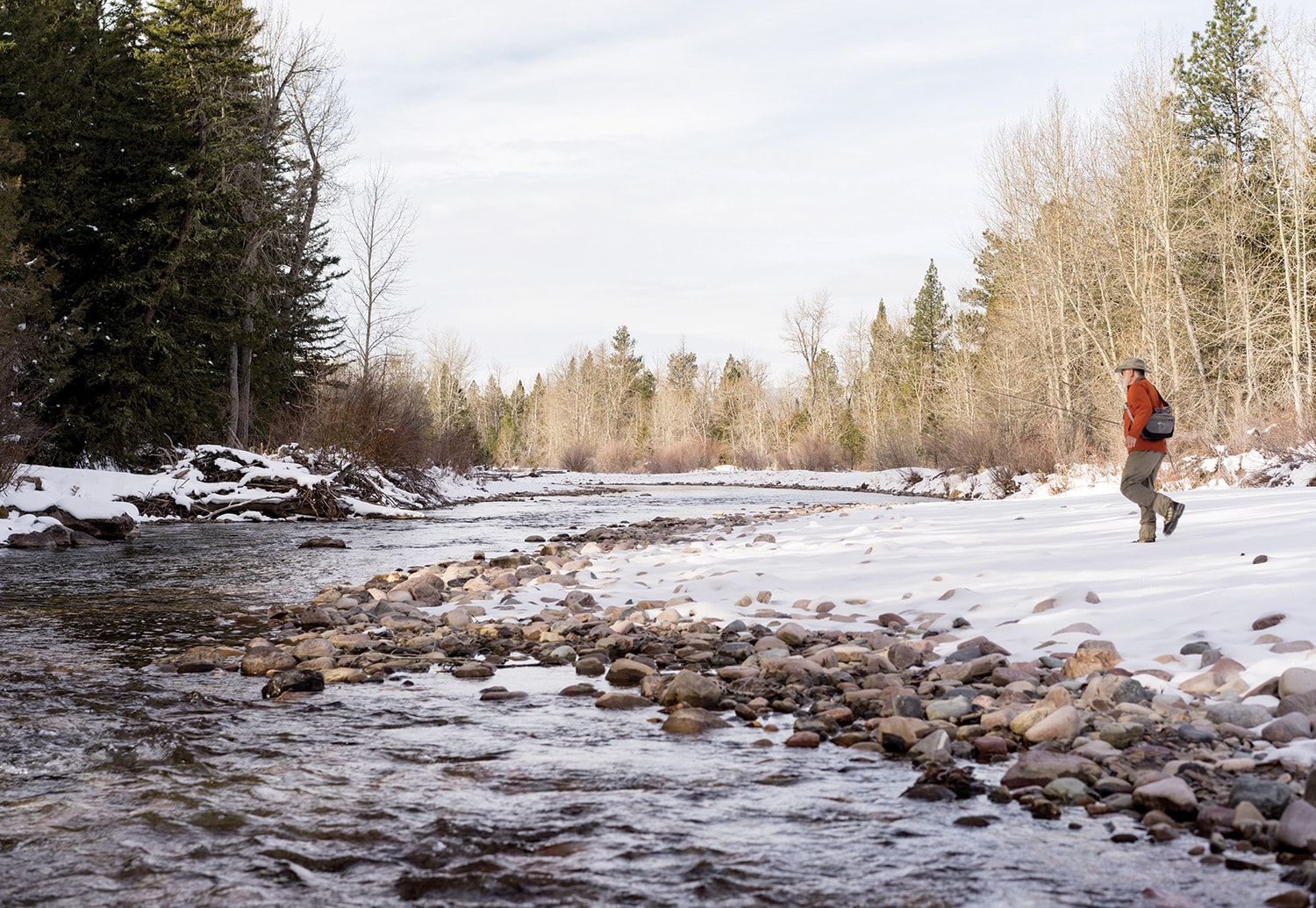 Fishing the Blackfoot River on a winter’s day is a respite that Roos embraces in between working to protect and preserve the river and its surrounding communities.

Given the environmental threats facing it, the Blackfoot River needed someone to grab the wheel and turn the car around. It didn’t take long for Roos to see that; while he knew the destination, he wouldn’t be able to get there alone. The road map to a healthy river would rely on an involved community. In the late 1980s, Roos, along with Garland’s daughter Becky, Darrell Parker, and Stan Bradshaw, founded the Big Blackfoot Chapter of Trout Unlimited. 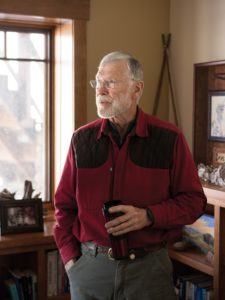 In considering Roos’ impact, his work has rippled throughout the fishing outfitter industry, local and national Trout Unlimited ranks, Blackfoot- area ranchers and residents, and anyone who has enjoyed the river.

Since its inception, the chapter has preserved over 100 miles of instream habitat and rehabilitated more than 88 miles of riparian habitat along the banks of 41 streams. They have revived 2,900 acres of wetlands, and seen 56,000 acres placed under grazing management systems. Working with a variety of water users, the chapter helped open more than 600 miles of tributaries to spawning through barrier removals, and installed 26 fish screen systems in irrigation diversions. They have also created instream water leases on eight key tributaries, water conveyance efficiency projects on 32 tributaries, and established monitoring protocols on 188 tributaries and six main stem reaches.

In speaking of Roos, Becky Garland’s enthusiasm is contagious. “Tough issues,” she said, “didn’t seem so tough when Paul was in the room. He would give respect and listen to all opinions.”

With the help of Garland, Land Lindbergh, Bill Potter, and Hank Goetz, the Big Blackfoot Chapter hosted a one-day symposium for local river users in 1988. The list of invitees included mining and timber companies, state and local agencies, ranchers, recreationists, guides, outfitters, and local business owners. From this first meeting, ranchers and anglers entered into collaborative dialogues, timber and mining interests saw themselves respected rather than demonized, and local communities began to take ownership of their favorite resource: the Blackfoot River. A second meeting followed, and the formation of the Blackfoot Challenge Watershed Group began.

“Emphasis in the Blackfoot Challenge Watershed Group was always placed on what we have in common,” Roos recalls of this meeting, “and bringing people together to find a common vision. That sort of emphasis brings more ideas to the table.”

Both Roos and Lindbergh agree that Garland was a vigilant voice for the Blackfoot River at a time when advocates for resource conservation were in the minority. As Roos said, “Becky was an inspiration to us all.”

“Roos thought outside the box,” Garland said, “and he still does today. He can educate people without jamming ideas down their throats or putting his own words in their mouths.” 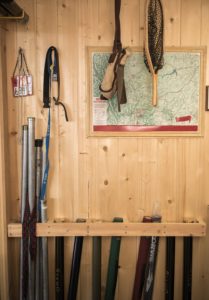 Fly fishing may have been the focus for Roos, but a vision of long-term sustainability drove his passion for protecting the Blackfoot River.

Lindbergh, who lives along the Blackfoot and created the first conservation easement in Montana on his property, recalled those early days. “We just wanted folks at the table. The Challenge worked hard to have a wide umbrella. You can’t get much done if you don’t have all the players in the same room.”

Jim Stone, founder of the Rolling Stone Ranch outside of Ovando, became one of Roos’ genial adversaries in working toward a shared vision of the Blackfoot. Stone, a rancher, felt that allowing cattle to graze along tributary streams wasn’t one of the culprits behind the river’s degradation. Roos, an angler, felt otherwise.

“Jim and I would meet at Trixi’s Saloon in Ovando for a beer,” Roos said. “We’d argue, we’d grab each other’s arms, and over the years we’d realize we were both right and we were both wrong.”

Because of their willingness to listen to each other, and to balance the ability to disagree but stay on the same path, Roos and Stone worked hard to find areas where they could agree. In time, they found common ground, and they remain friends today.

In addition to being a founding director of the Big Blackfoot Chapter of Trout Unlimited, Roos’ list of conservation accomplishments runs deep. In the 1970s, along with Cecil Garland, he founded the Caretakers, a Lincoln-based grassroots group dedicated to stopping the reopening of the Mike Horse Mine Complex. He also helped found the Fishing Outfitters Association of Montana, and served on the boards for Initiatives 122 in 1996 and 137 in 1998, with I-122 failing, but I-137 passing two years later, effectively stopping future cyanide-heap leach mines. He served two terms as a director of the Clark Fork Coalition, co-chaired the Lincoln Forest Restoration Committee, and most recently helped create Lincoln’s outdoor sculpture garden, Blackfoot Pathways: Sculpture in the Wild. When Roos grew his outfitting business, he demanded that his guides be conservationists, stewards of the river, and active in local communities. He was also a loyal mentor, and wanted it to mean something to guide for Paul Roos. For anyone who aspired to work for him, there was always a tryout, a trial run at guiding. The first client was always Roos himself.

My day at the oars with Roos was one of the longer guiding days of my life. Nearing the end of the float, he had caught only a few submerged sticks. And then out of the blue, he instructed me to cross the river … and cross fast. Digging hard with the oars, I ferried us across the current. As we slid into the bank, Roos reached for the net. He extended his arm and scooped up a beer can. Neither one of us spoke. 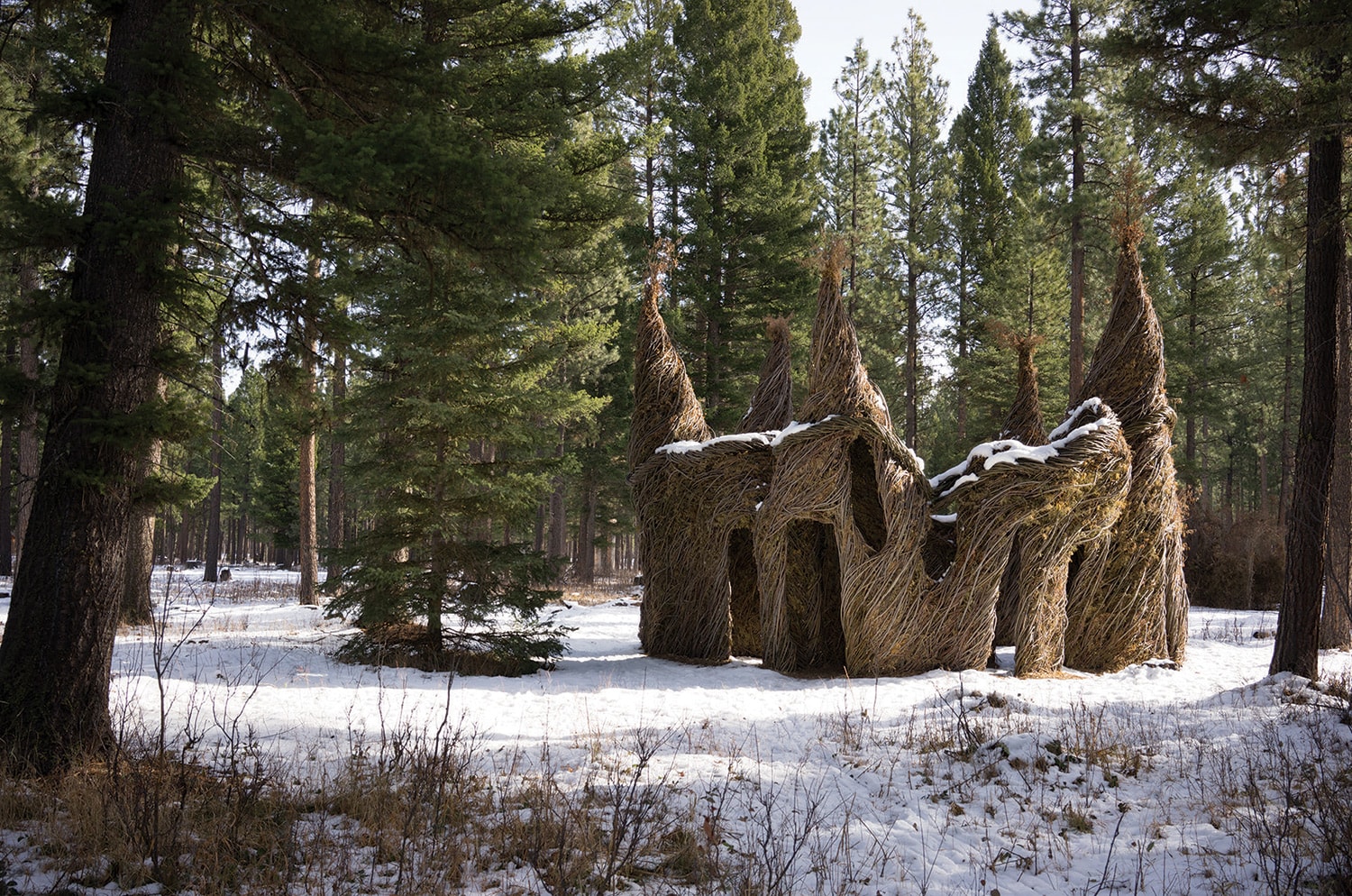 The international attraction, Blackfoot Pathways: Sculpture in the Wild, benefited from Roos’ ability to collaborate and plan with a diverse set of interests.

In fact, the next words weren’t spoken until a half-hour later, when Roos finally landed a fish from a back-eddy foam line. “Thank you, Jesus!” I hooted. Roos had his trout and, as it transpired, I had a job.

These days Roos’ heart is full — overflowing with love for his river, the communities that rely on it, and a long lineage of guides and outfitters who embrace Blackfoot River conservation.

As I drove home from visiting with Roos, crossing the water of the Blackfoot River, dark with the cold of the winter, I considered some of his last words to me: “In all of this conservation effort, I’ve always tried to be a better me. But I’ve got a long way to go.”

Anyone who has ever caught a wild trout on the Blackfoot thinks you’re being a little too hard on yourself.