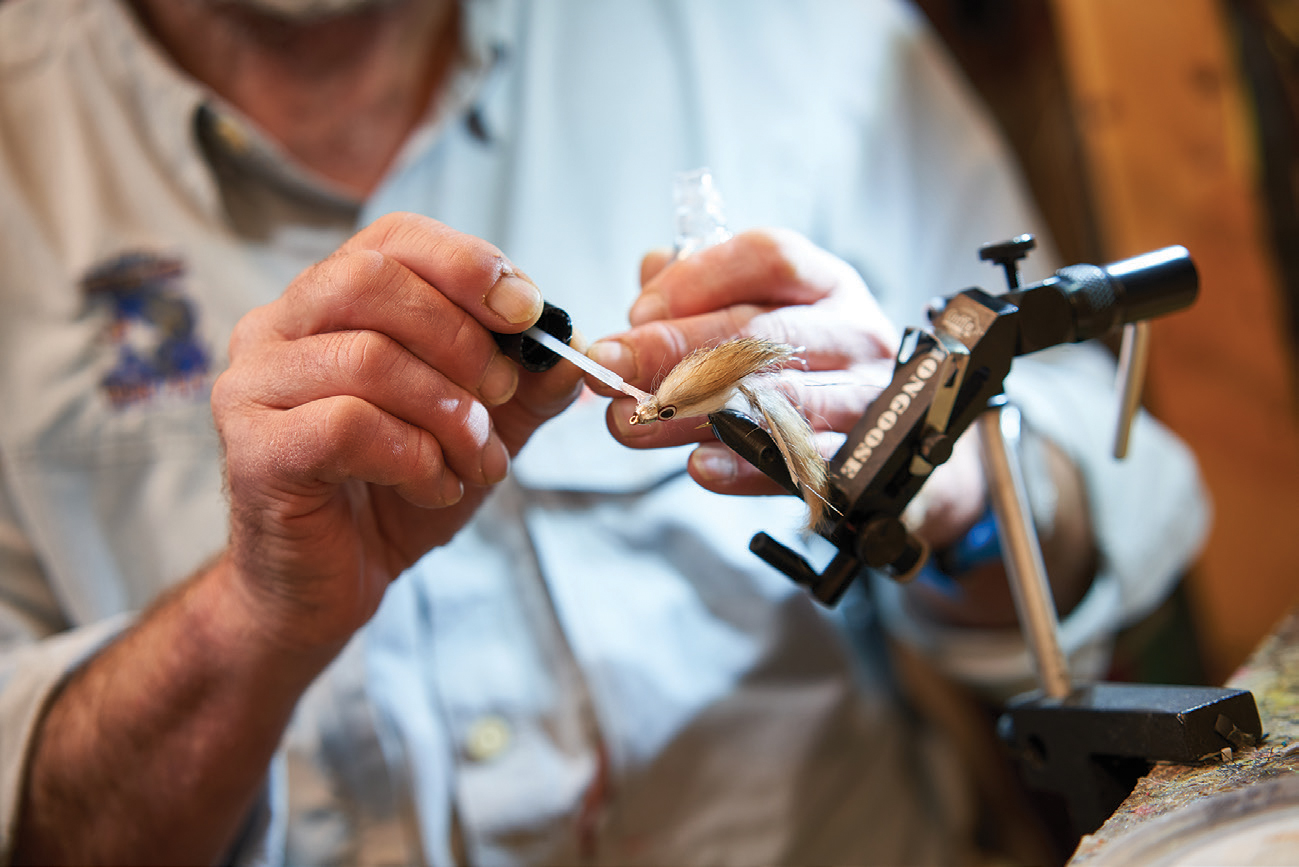 From his home base in Jackson Hole, Wyoming, Scott Sanchez can often be found tying his own flies. He’s been hosting an after-school fly-tying class for kids at JD High Country Outfitters since 2012.

At 5 a.m. on a Saturday morning in September 2019, Scott Sanchez’s phone rang. The caller on the other end sounded stressed, asking if Sanchez could fill in on a team for the Jackson Hole One Fly that was to happen that day… in just three hours to be exact. Sanchez said yes.

Luckily, the night before, Sanchez had prepared his flies and fishing gear just in case he was needed as a substitute during the annual Jackson Hole event, which started in 1986 as a fundraiser for conservation, habitat preservation, and various projects that benefit trout and other wildlife in the Snake River Basin and beyond. The One Fly is based around a competition, in which 40 teams of four anglers fish for two days, with each person using a single fly of their choice each day. Team and individual scores are determined by the quantity and length of the fish caught, and no more than one of the teammates can be considered a “professional” angler, meaning they have worked as a guide in the past five years. And although it’s a friendly competition, there’s no doubt that the drive to win spurs many of the participants. 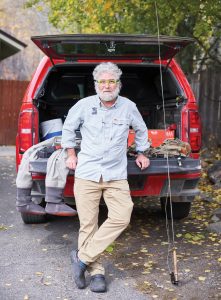 It’s not unusual for Sanchez to pack several different outdoor activities into a single day, often hunting in the morning, biking in the afternoon, and fly fishing into the evening hours on the nearby Snake River.

This wasn’t the first time Sanchez was called upon to fill a last-minute opening, and that’s why he was prepared. After rushing to meet his teammates that morning, he and his group ended up in fifth place; and since they didn’t have a professional guide like the other four teams who came in before them, they were the top amateur team.

Win or lose, Sanchez loves getting out to fly fish no matter the day. His favorite aspect of the sport is “the essential part of nature ­— the smell, the touch, the sounds, the scenic beauty — all of that combined with watching a fish eat your fly.”

When he’s not on the river, Sanchez can be found at JD High Country Outfitters in downtown Jackson Hole, within sight of the legendary elk antler arches that define the Town Square. As the manager, he spends plenty of time in the fishing department, but he’s also a jack-of-all-trades, helping people find the perfect gear, whether it’s for angling, trail running, hunting, camping, or cross-country skiing. And Sanchez doesn’t just peddle the goods — he participates in just about every outdoor activity that’s available in the region. His daily life “mimics what I do in the store,” he says, noting that he likes to pack multiple sports into a single day, perhaps going out early to hunt, then doing a little mountain biking, and wrapping up the day with some fly fishing on the nearby Snake River. 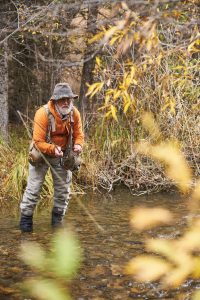 As an avid angler, Sanchez enjoys sharing fly-fishing tips with customers at JD High Country Outfitters in downtown Jackson Hole, where he works as the manager.

Sanchez has worked in the fly-fishing industry for more than 30 years, as a wholesale manager, fishing department manager, and fly consultant, among other jobs. Along with that, fishing has been a part of his life as far back as he can remember; he started around the age of 4 and got his first taste of fly fishing and fly tying at 12.

Sanchez’s brother-in-law served as his scoutmaster and was like a father figure to him. He had an old fly-tying kit and first introduced him to the art. Sanchez was mesmerized, and he began saving his money for fly-tying supplies. However, on a 12-year-old’s budget, his main source of supplies were found objects, including items from his mom’s sewing kit and roadkill that he could scavenge for feathers, fur, and other materials. “The good thing about doing that, rather than having everything and anything, is that you learn how to adapt and innovate,” he says.

Friends began to notice Sanchez’s fly-tying skills and started asking him for help and advice. He enjoyed sharing his knowledge, and at the age of 14, he taught his first fly-tying community education class at his junior high school in Salt Lake City, Utah. To this day, Sanchez still loves sharing his skills with fly-tying aficionados, young and old. Before COVID-19 hit, he taught a drop-in after-school class for kids at JD High Country Outfitters, which he has been teaching since 2012. He describes the classes as being “like pick-up basketball.” While teaching the basics, he also allows plenty of room for creativity, and students come up with fun designs, like saber-tooth beavers, Cheez-It flies, and even parachutes. “Kids are so much fun that way, and they’re less uptight than us adult people,” he says. Some of his former students went on to work for the shop when they came of age, and Sanchez says they’ve been some of his best employees. 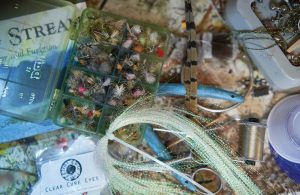 As a child, Sanchez often used found materials to create his flies. Today, he uses a full array of options.

Sanchez also appreciates how much enjoyment the kids derive from fly tying, much like he did as a child. “A lot of fly tying is having fun, being innovative, trying different things, but doing it with a smile on your face,” he says. “That’s the reward for me — seeing the satisfaction.”

Over the years, Sanchez has also taught a variety of classes for adults, and one of the most meaningful experiences for him was teaching a class for injured veterans. While some overcame significant physical injuries to tie flies, others found emotional healing through the hobby, including one who was suffering from post-traumatic stress disorder and hadn’t slept a full night in two years. “The next year, he came back and said that … when he couldn’t sleep, he started tying flies and finally was able to sleep some,” Sanchez says. “It’s the satisfaction that something you taught a person actually benefits them emotionally. The smile on the face is the biggest thing.”

Sanchez has been a featured guide on television programs, and he’s authored several books, including Introduction to Saltwater Fly Tying; A New Generation of Trout Flies: From Midges to Mammals for Rocky Mountain Trout, which focuses on trout patterns; and The Never-Ending Stream: A Tribute to Fly-Tying Form and Function, which incorporates photos, illustrations, and stories about the flies and fly tiers who have inspired him. He’s also contributed writing and photography to a number of American and Japanese fishing publications, including a column for American Angler magazine.

For all of his efforts, Sanchez has received numerous accolades and awards, including the 1994 Peter Crosby Memorial Sportsmanship Award from the Jackson Hole One Fly, along with awards from the Federation of Fly Fishers (now called Fly Fishers International), such as the 2007 Arnold Gingrich Lifetime Achievement Award for literature, the 2010 Buz Busek award, and top place in the organization’s 2014 Iron Fly Contest. 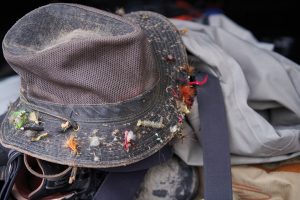 Sanchez’s well-worn fishing hat features some of his favorite flies.

Over the years, Sanchez has traveled to fish for peacock bass in Brazil, as well as for a variety of species in the Virgin Islands, Belize, France, and all over the U.S. He hopes to travel to Argentina and Bolivia in the future to fish for freshwater dorado, which can weigh up to 60 pounds.

And when he’s not fishing or working at the shop, Sanchez keeps busy mountain and road biking, Nordic and alpine skiing, trail running, hiking, camping, and hunting, using firearms, compound bows, recurves, and longbows. He and his son have also enjoyed building hickory longbows together.

Sanchez’s endless curiosity, creativity, and passion for the outdoors is evident in everything he does, but for him, the tie that binds it all together is pure enjoyment. “The most important thing for people in fly fishing or other activities is making sure you have a smile on your face,” Sanchez says. “Get out and have fun, and don’t take yourself too seriously.”