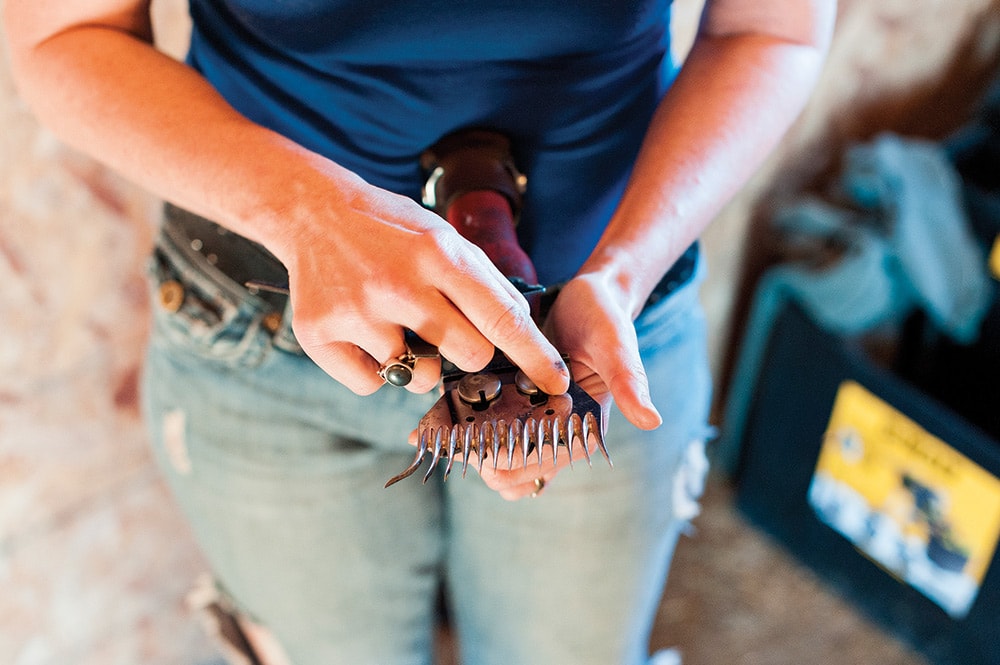 Kahler showcases the wellworn tools of her work.

Sunday morning, first half of June, at the Reid place east of Ballantine, along the Highline Canal. Bluebird day, some cut hay rowed in fields, meadowlarks blasting from fence posts, silty water brimming down the canal, the air blessedly cool. Shannon Kahler pulls up in her small SUV around the time many people are heading for church.

Bob and Vicki Reid epitomize her clientele. They live on a small section of a family farm. Relatives dot the surrounding acreage. Bob is a heavy-equipment mechanic. Vicki is sporting an American flag T-shirt. There are two vintage Farmall tractors, one a ’42 Model A, and seven pickup trucks arrayed around the yard.

They keep a few sheep, a flock of goats, horses, some pigs, a couple of ducks, nine or 10 dogs. The animals are more hobby than business, and the kids are in charge of most of them. Sheep are Dylan’s responsibility. He is 14. It is what you do in this country. Kids make some side income, learn about taking care of things, make connections with everything livestock connects you to — the land, the weather, cycles of life and death, beauty, sickness, birth, discipline, frustration, humor, heartache, loss, time management.

“I like to be done by June,” sighs Kahler as she unloads gear. “It gets so damn hot after that. But it never seems to work that way. I’m still getting more calls from as far away as Missoula. People just can’t find anyone. Hard to turn them down.”

She is a small woman, maybe 120 pounds, has braces on her teeth, a nose piercing, ripped jeans, warmth in her quick smile. She has brought along her husband, Robert, to help. It’s a small job, as most of hers are, but she’s learned that small doesn’t usually mean fast or easy.

They set up in a tight, concrete- floored room, plug in the fan, organize tools. The Reids are ready. Four pregnant ewes mill around in a pen, heavy with wool. Dogs wander in and out, a cat, other family members check out the progress from time to time. Kahler settles herself, leans over the pen, and talks soothingly to the ewes.

“I prefer to think of it as giving these girls a spa day,” she laughs.

Some people know their calling early in life. Others are born into a family legacy or are pressured into a line of work by necessity. For Kahler, it was a matter of personal desperation.

“I have a flock of five sheep,” she says. “For a while I had an older gentleman, Johnny Ahern, who would come and shear them. He was fantastic, almost a sheep-whisperer, but he retired, and then I couldn’t find anyone.”

Kahler heard about sheep-shearing courses offered at Montana State University in Bozeman. Out of options, she decided to get the training so she could deal with her handful of sheep.

“Custom outfits travel around the state and handle the big operations, herds in the hundreds or thousands,” she says. “It’s not worth it for them to deal with someone with eight animals.”

Problem is, there are more and more people in the same boat. Hobby farmers, 4-H sheep, homesteaders, people in Indian Country. Six sheep here, 10 there, another 12 down the road. All of them in the same bind Kahler found herself in six years ago.

You can guess the rest.

Kahler started shearing her own flock, and word spread. A friend in the spinner’s guild she belongs to asked if she’d shear her band of sheep. She knew the woman’s desperation. She couldn’t say no. It wasn’t like she needed the job. She works at a bookstore, distributes bank products, and is an artist, but pretty soon she was spending her weekends shearing sheep from Roundup to Lame Deer and beyond. She bought more equipment, cajoled Robert into being her assistant when he could, started learning the shortcuts and efficiencies of the trade, and watched professional shearers do their work.

Kahler’s operation is not simply a scaled-down version of the big custom crews. Her business niche is profoundly different in character.

“Those guys run an assembly line,” she says. “They have to. You can’t deal with those numbers any other way. Two and a half minutes a sheep and on to the next. It isn’t that they are rough or crass, they just have to keep moving. I think the world record, held by a Scot, is 37 seconds.

“I take more like five or 10 minutes a sheep,” she says. “The sheep I get are pets. They all have names. I hear each individual animal’s story while I’m working. And I come back year after year. I get Christmas cards from some of them!“

As if on cue, the first ewe comes out of the pen. “That’s Flobly,” Dylan chimes in. “She’s kind of squirrely, but she’s my favorite.”

It may be spa day, but the process looks more like a wrestling match than a massage. Hooves flail past Kahler’s head. The pregnant ewes outweigh her by 100 pounds or more. She hooks a hoof behind her thigh, grabs hold of the ewe’s neck, crimps her into a position no sheep would ever naturally be in, and starts to work.

Kahler has been kicked in the face. Her legs and arms are often bruised and cut. Normally she wears knee pads and a back brace. She trains year-round to prepare herself for the back strain and physical beating she gets every spring.

“I’ve been thinking that I need a T-shirt to let people know I’m not a wife-beater,” says Robert. “It would say ‘My Wife’s a Sheep Shearer.’”

The fleece starts to pile up on the floor. The nine-prong razor cuts smooth, wide swaths. Kahler fights through the knots and snarls, over the inevitable bumps and growths on the animal’s body, stops to scratch behind the ears, keeps murmuring, soothing, all the while swinging the heavy body here and there. By the time she finishes, Flobly is remarkably calm. Kahler pats her on the side and lets her up. The ewe looks slightly stunned, unsure, and finally totters out into the sunny corral.

“I hesitate to admit this,” Kahler says, “but I’ve been known to use aromatherapy with sheep. I keep doing it because it works.

“I sheared some rams for a client once and she warned me about how wild they were. I smeared essential oils over my knee pads and back brace. I stayed really calm, just kept talking. They couldn’t believe how cooperative and easy the rams were for me.

“You never know what you’ll find,” Kahler says several times during the day.

For one thing, she doesn’t know what sort of conditions will present themselves. Kahler’s personal record is 35 sheep in one day, achieved with the aid of chutes to hold them in place. But she also mentions a flock of six sheep that took her more than eight hours to work through. Most hadn’t been sheared for two years. Each individual fleece weighed as much as 30 pounds. The snarls and dreadlocks were impenetrable. The weight of the wool hanging from the body was enough to tear the skin.

“Those people had tried to find a shearer, but hadn’t been able to. They were desperate,” Kahler remembers.

Then there are the oddities presented by each individual animal. “Wrinkly Merinos, they are the sheep shearer’s nightmare,” Kahler says. “I try to be really careful because you don’t know what will be under there.”

Kahler mentions a hermaphrodite sheep she sheared once, discovering both male and female genitalia as she worked. Another tragic story she heard about stars a young ram that had been mistakenly grouped with ewes, and had his penis shaved off.

Three ewes into the day, Kahler’s face is sheened with sweat, despite the fan and the cool temperature. “Did you know about this?” she asks Vicki. She has uncovered an open wound on the side of a pregnant animal. It is oozing pus, raw, and gaping.

The Reids mix up some ointment, gob it over the puncture, speculate on the cause. They settle on barbed wire as the likely culprit. The ewe seems healthy enough, but without the haircut, they never would have known.

After each ewe, Dylan bags up the fleece, stores it in a barrel. A fleece can bring as much as $40. “There’s no such thing as bad wool,” Kahler says. “You can insulate the chicken coop with the scraps, if nothing else.

“This is such an opportunity for people who like this kind of work, and who love animals,” Kahler adds. “You can pick up extra money on weekends, meet really great people. I encourage young people to get into this. It’s hard work, but rewarding work, and there are more and more small flocks every year. More flocks, and fewer and fewer shearers.”

Kahler talks about upgrading her equipment, buying a trailer and set of chutes to make it easier physically. She charges $8 to $12 an animal, so it isn’t like she’s raking in the profits, but she claims to have paid off her initial investment in startup equipment in her first shearing season.

The Reids ask if Kahler would mind throwing in an extra sheep for its first shearing.

“If they have a good experience the first time,” Kahler says, “it’s so much easier after that.” She sweet talks the young ewe, pets and scratches her.

“I have a woman with a flock of older ewes I’ve been shearing for five years now,” Kahler says. “They are all arthritic and achy. I take my time with them, massage their joints as I work. They actually fall asleep while I shear them. I have to wake them up when they’re done!”

The young sheep is a much easier lift for Kahler. She maneuvers the animal deftly, talks to it. “Sometimes people sing to them,” she says. “Johnny used to do that.”

When she finishes, it is suddenly quiet. The clatter of clippers stops. Kahler straightens up, stretches, and looks out the window. Spa day is over. But the newly shorn sheep doesn’t want to leave. Clean and white, the ewe lies down on the cool, concrete floor, and soaks up the attention. Outside the sun lights the corral where goats and sheep stir and bleat. Kahler bends down, loves her up some more. Everyone laughs.