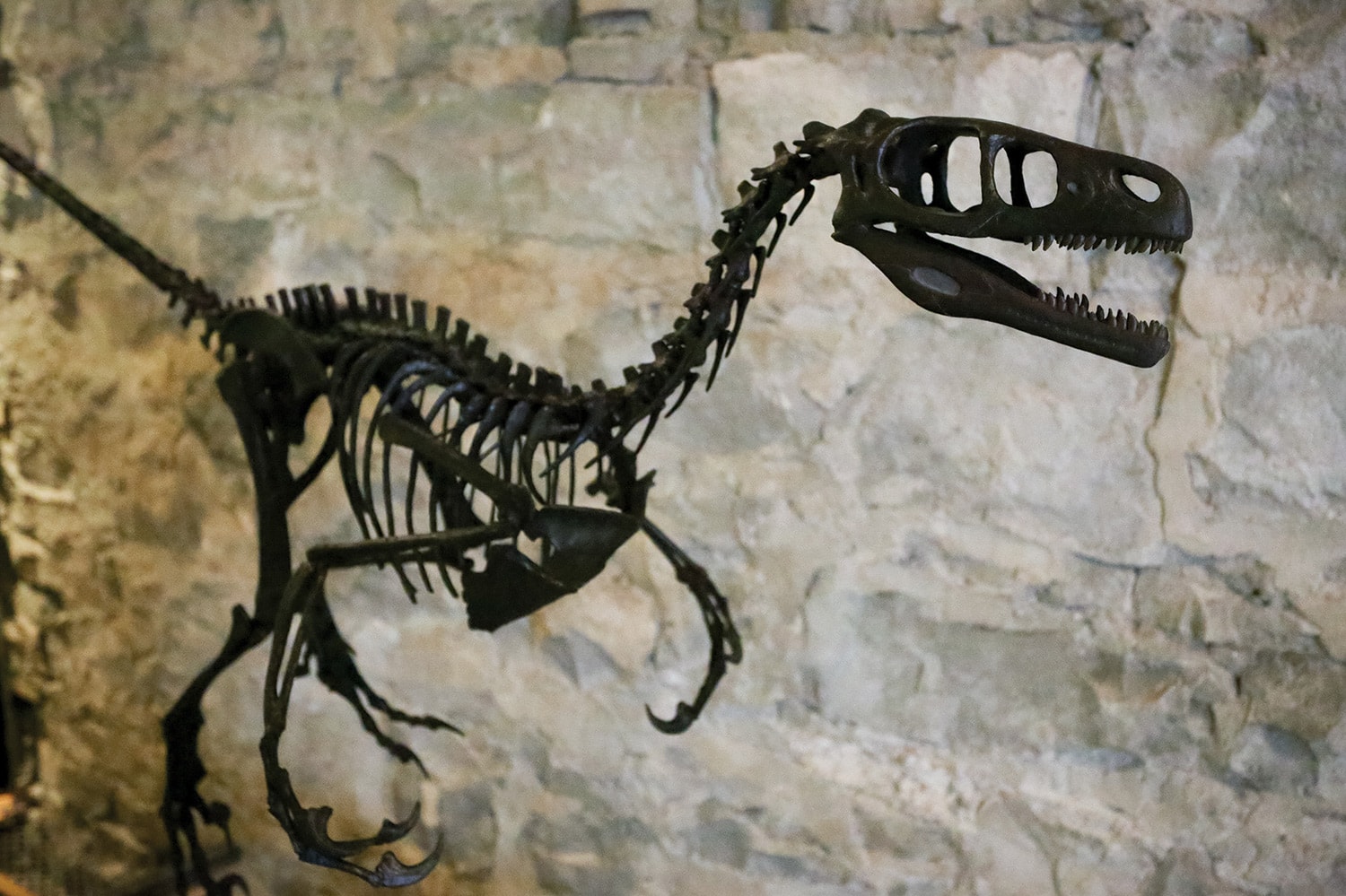 The cast skeleton of a Saurornitholestes, a relatively small theropod from the late Cretaceous, created by sculptor Matt Smith.

During the decades that he worked at the Museum of the Rockies in Bozeman, Montana, legendary paleontologist Jack Horner consistently sought one sculptor more than any other when he needed a dinosaur. Not only was Matt Smith among the best practitioners of his trade in the world (and still is), he was conveniently in Horner’s backyard. It’s a short trip over the Bozeman Pass from the museum — where Horner served as curator of paleontology until 2016 — to Smith’s studio in downtown Livingston. Horner was happy to make the drive.

“There’s a reason Matt’s in high demand,” Horner says. “He’s absolutely right at the top for what he does.”

It would be hard to find a more authoritative endorsement. Horner is the most famous dinosaur researcher alive, with a track record that includes discovering the world’s first dino embryos and the Western Hemisphere’s first eggs. He inspired the fictional character Alan Grant in Michael Crichton’s 1990 book Jurassic Park, and was then hired by Steven Spielberg as an adviser for the 1993 blockbuster film adaptation, as well as each sequel. He knows a good Tyrannosaurus rex when he sees one, and not many people anywhere can make a better one than Smith.

Smith was a student at Montana State University in the 1980s when he met Horner. An art major with an interest in both sculpture and paleontology, Smith approached Horner about doing an independent study to learn more about mold-making techniques. After Horner handed him a box of fossils and told him to build a dinosaur, Smith waited in vain for instructions. “

He said, ‘Figure it out,’” Smith recalls.

But Horner did give a clue: Dissect chickens to study structure and muscles. Smith calls it the best advice he’d ever received, and he promptly “started cutting up chickens.”

Smith completed the project, which was later featured in a Museum of the Rockies exhibit. His dual attraction to art and science, however, dates far beyond his initial encounter with Horner, back to his childhood when he first experienced the exhilaration of searching for fossils and animals to examine. He split his early years between Baker, in Eastern Montana, and Oregon, where he was born.

As a boy, inspired by the treasures he discovered in the wild, Smith began sculpting bones from paraffin wax. Then he’d bury them in the ground, planting little mysteries for future paleontologists to unearth or, more likely, for him to dig up later. In second grade, he dissected a frog and brought a surprise to school.

“Most kids give teachers an apple,” he says. “I gave her a frog stomach. I saw her years ago and she still had it.”

At college in Oregon, Smith was interested in studying paleontology and asked his geology professor about good careers in the field. The answer — fossil fuels through micropaleontology — wasn’t inspiring.

“I thought, ‘If I’m going to get a degree in something I can’t get a job in, I might as well pursue my art,’” Smith says.

He then went to welding school before spending two years in the Marines as an airborne field radio operator. He later landed in MSU’s art program in Bozeman where, in addition to studying under Horner and selling bronze sculptures to help pay for college, he satisfied his creative impulses by completing a bilingual stop-motion animation project for professor Dick Littlebear. Smith sculpted characters from an old Cheyenne folklore story about a coyote losing its tail, and then painstakingly altered their bodies and positions, over and over again, frame by frame, to produce the effect of action. Littlebear, who also appeared as one of Smith’s moving figures, narrated the film in Cheyenne and English.

“It didn’t quite turn out how I wanted it to,” Smith says. “I think I was a little ambitious.”

Smith’s initial work for Horner led to an artist-in-residence job at the Museum of the Rockies. His training in sculpture and welding, along with skills acquired during a post-graduation boatbuilding job, merged with his personal interests in fossils and animal anatomy, providing a broad foundation for the unique task of recreating ancient beings in lifelike exhibits. Those distinctive professional underpinnings continued to guide him after he left the museum in 1991 and set out on his own. Today, his Smith Studios, Inc. is located on the corner of Park and B streets in Livingston.

“It all came together,” Smith says. “I use all those skills I learned without knowing what I was going to do with them.”

Smith does original reconstructions, made of real fossils, and replicas, including full dinosaur restorations, either life sized or scaled down, as well as skeletons, skulls, and body parts. Over the decades, he has built many of the Museum of the Rockies’ most celebrated exhibits, including a complete Torosaurus, which non-scientists would call a Triceratops. It was a massive undertaking, requiring Smith to take out a wall in his shop, estimate balance points as he pieced together the disparate parts, hire a crew to help build it and then break it down into sections, transport the behemoth over a mountain pass in several trips, and finally reassemble it inside the museum. By its side was a baby Torosaurus, which Smith engineered with a breathing mechanism, so its rib cage would gently move while children ogled in amazement. The exhibit also showcased another of Smith’s talents: mounting huge displays safely and realistically, which for other projects has required hanging heavy flying reptiles from ceilings.

Smith’s Livingston studio is as complex as his creations, with machines, tools, and workspaces to fabricate steel components and construct metal armatures that form base skeletal structures; cast bones in a rigid polyurethane material; carve bones and muscles from foam; model and sculpt figures out of clay and wax; build skin with epoxy; and conduct the delicate chores required for finishing pieces both small and big.

Smith’s wife, Tammy Payne-Smith, whom he met while she was working in the Museum of the Rockies’ paleo lab, is a fellow artist and critical partner in the venture, specializing in fine detail work, such as patching, grinding, and painting, while assisting with molding, casting, and sculpting. Crews come aboard for bigger projects, and Smith is quick to thank the numerous volunteers who have lent their time and expertise over the years.

“Tammy is the other half of the business,” he says. “It’s a joint effort.”

Smith’s work has been shown in museums from Florida and New York to China and Japan, and in prestigious institutions such as the American Museum of Natural History and the Smithsonian. He is also invited to teach molding, casting, and skeletal mounting techniques across the globe, including locations in Argentina and China. At one point, he was traveling to China so often that he took two years of college Mandarin. Ever hungry to learn, last year he completed a master’s thesis in American Studies from MSU with a research report entitled, “Othering Montana’s T. Rex and the Consequences of Mumpsimus.”

Not all of Smith’s work focuses on dinosaurs; he describes his specialty as rare specimens from the Triassic, Cretaceous, Miocene, and ice age periods. He has reconstructed ancient plants and animals, such as giant sloths and bear dogs, some of which are rendered as gorgeous bronze sculptures fit for a fine-art gallery. He also makes faux claw and tooth fossils (popular items at museum gift shops) by molding the pieces with silicone rubber, casting them in a polymer that captures precise details, and hand painting them to meticulous authenticity. He has built traveling exhibits as well, and his work appeared in the first “Jurassic Park” movie.

Smith rigorously researches scientific texts and works closely with paleontologists. Sometimes he only has a scattered sampling of fossils to guide him, meaning he has to create the missing bones and the rest of the body from reference materials and his own working knowledge and artistic acuity. His empirical approach, as well as his willingness to take risks and veer from previous artists’ attempts to construct a creature that no human has ever seen, separates him from many peers in his field, Horner explains.

“A lot of times when artists are making renditions of dinosaurs, they’re always copying some other artist,” Horner says, noting that “there are some really crappy ones” at museums. “The artists that copy each other just keep copying the same mistakes over and over again. They don’t want to be laughed at. Matt’s really willing to take the risk.”

Horner says the Museum of the Rockies’ current display of Smith’s Tenontosaurus and Deinonychus, closely related to the Velociraptor, is “basically the best rendition of those two animals that has ever been made.”

Horner also hired Smith to make a T. rex model for one of his book covers. “That T. rex was completely different than what other artists had done,” Horner says. “Matt puts the effort into knowing where the muscles are going to be. That’s great for me as a scientist knowing he’s actually going to put the work into it.

“Other artists might not even look at a skeleton,” he adds. “Matt looks at alligator skeletons and bird skeletons and puts in the time. It makes a big difference.”

Humble and understated, Smith deflects praise by saying he’s been blessed by opportunity and world-class professional partners, pointing to museum staff, volunteers, and researchers such as Horner, Phil Currie, Jim Farlow, and Caleb Brown, although specialists of their ilk don’t work with artists out of charity. They respond to superior results, and Smith consistently produces them.

“I’ve been very fortunate to work with a lot of great paleontologists,” Smith says.

Smith is at the stage of his career where, while not exactly slowing down, he’s getting more selective, perhaps wiser. He no longer has the appetite for projects that require removing walls in his studio. He and his wife are beginning work on a contract for five fleshed-out bronze sculptures of ice age animals to be cast at Burkhart Bronze in Bozeman. He appreciates their scaled-down size.