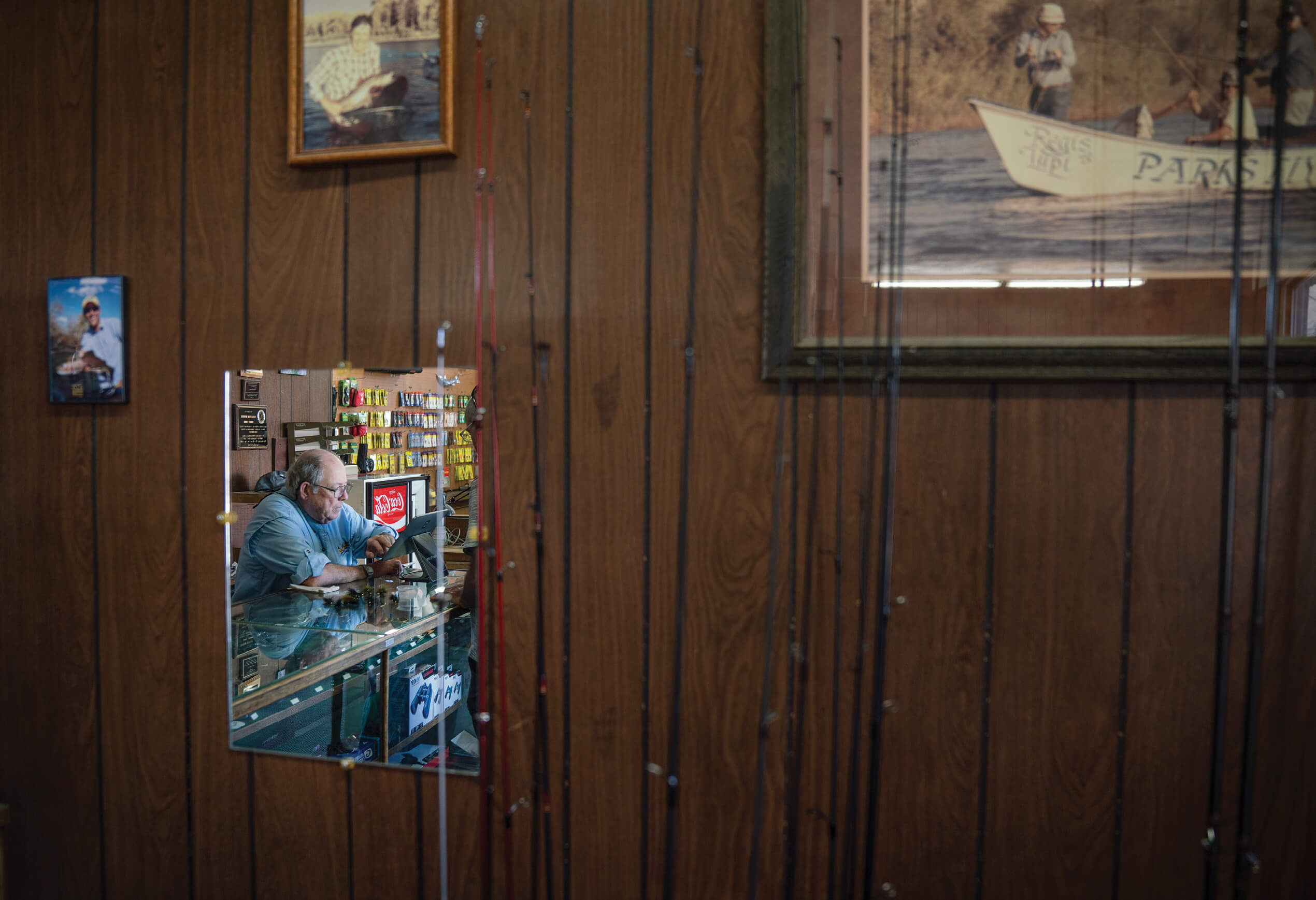 Richard Parks presides over his Gardiner, Montana ﬂy shop, as he’s done for the past 50 years.

The possessive apostrophe in Parks’ Fly Shop is intentional, differentiating the Yellowstone gateway business from the national park that’s a long cast to the south. But the punctuation also serves to express ownership, of both the idea of fly fishing as a necessary human experience and of the hold that the Parks family has had on this block of Gardiner’s Second Street since Dwight Eisenhower was president and catgut was used as fishing line.

From the window of his shop, just downstream from the confluence of the Gardner and Yellowstone rivers, Richard Parks has seen millions of visitors pass by on their way to Yellowstone National Park, their eyes wide to the wonderland of this headwaters country. He’s guided thousands of them to their first trout. Not accidentally, he’s also opened their minds to the fact that those fish, the frothing-cold streams where trout live, the mountains and forests above, the grizzly bears visitors hope to not encounter, and the belching hot pots inside the park are all part of the same complicated, interconnected, remarkable system. 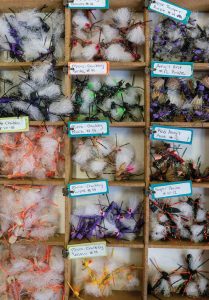 A selection of trout ﬂies designed to imitate terrestrial insects like ants and beetles.

Parks is a fishing guide, but he’s also a conduit to a wider and deeper appreciation for all the forces that produce the trout tugging at the end of a greenhorn’s line. “I guess it’s always been a component of how we interact with our clientele,” Parks says. “We want people to understand that the integrity of the ecosystem — and it is an ecosystem, despite the propensity of people to focus on one element of it at the expense of another — depends on the interdependence of the various elements: the wildlife, the scenery, the plant life, our life. It’s all of value and it’s all interconnected. It’s also a pretty spectacular fishery!”

That’s the manifestation of a worldview that Parks received from his father, who founded the iconic fly shop on Gardiner’s main drag not long after World War II. Merton Parks worked in the pulp-paper industry of northern Minnesota and made a side business tying North Woods trout patterns for his buddies who, Parks notes, “were perpetually out of flies.” Merton’s first trip to Yellowstone, on a family vacation back in 1947, not only imprinted on him the park as the epicenter of the nation’s trout-fishing culture, but also ignited the idea of a life beyond pulp mills and mosquito-bog logging camps. 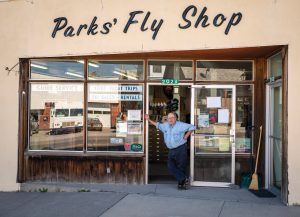 Founded shortly after World War II, Parks’ Fly Shop was the only sporting goods store in Gardiner— the gateway to Yellowstone National Park’s northern entrance — for decades. The shop on the town’s main drag hasn’t changed much in nearly 70 years.

Another summer vacation followed before the Parks family moved to Montana in April 1953, into a storefront in Gardiner that was owned by legendary Livingston fly-fishing pioneer Dan Bailey. “That was the year I turned 10,” Parks says. “I’ve been in the shop pretty much ever since.”

Merton supplemented his retail income by teaching history and social studies at Gardiner High School, tying and selling flies during the off-season, and guiding clients to streams and fish that had seen vanishingly few fly lines or high-floating Improved Sofa Pillows (the stonefly imitation that Merton is credited with developing). The family’s business as the first — and for a long while, only — fly shop at the gates of Yellowstone’s northern entrance allowed Parks to learn the area’s fishing as a guide and knock-arounder, working waters from the Firehole and Lamar rivers inside the park, to the Yellowstone from Gardiner all the way north through Paradise Valley to Livingston. 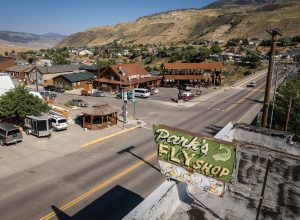 After being drafted into the Army, Parks entered Montana State University on the G.I. Bill, where he earned a degree in history. He was well on his way to receiving a graduate degree when his father “pulled up sick.” Merton died shortly thereafter. “That was in April 1970,” says Parks. “I’ve been running the shop since.”

During the 50-plus years he’s been at the tiller — of the store’s cash register, on the oars of the company’s drift boats, penning books about the fishery, or navigating the business through the turbulence of the fly-fishing economy — Parks has witnessed profound changes; some seasonal, and others more durable. Few were as sudden and transformative as this spring’s record floods, which Parks describes in his deadpan manner as a “doozie.”

On seasonal variation, Parks borrows heavily from his father’s formative experiences. “His first year out here, my father kept a log. He put 250 days on streams and on the Yellowstone, on waters either inside or outside the park. He never fished the same place twice, because his objective was to learn it all. He started guiding in 1954 and if there weren’t that all-many customers, there weren’t that all-many guides, either.” Parks still uses the knowledge gathered by his father. “Between seasonal variation, the size of the water, and insect activity, all of what you can know is either useful or worthless, but fortunately not all at the same time,” he says of the extreme variability in water flow and fishability of streams flowing off the Yellowstone Plateau. “Both supply [presumably, of catchable trout] and demand [of paying customers] is totally dictated by conditions. But I’m not so attached to any one place that I’m going to go there when there’s someplace better.” 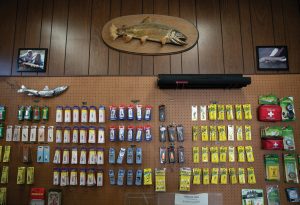 That defines fishing in the upper Yellowstone and park waters. When the headline rivers are blown out, there’s always a small tributary that’s producing fish. And when those slim waters play out later in the summer, the big rivers produce fish for those who know how to catch them.

But every now and then, the extreme conditions that sculpted Yellowstone’s landscape intrude on the predictable progression of the seasonal water flows and aquatic insect hatches. The first of these intrusions, at least in Parks’ professional life, was the searing forest fires of 1988, when over a third of Yellowstone Park burned. The second was just this past June, when rain fell on fresh mid-elevation snow, swelling rivers to historic high flows.

Gardiner was cut off from the rest of the world. Riverside cabins tilted into the roiling Yellowstone, running at an astonishing 52,000 cubic feet per second, as video crews recorded the river reclaiming highways and bridges. Upstream of Gardiner, the Yellowstone ate three miles of the North Entrance Road. 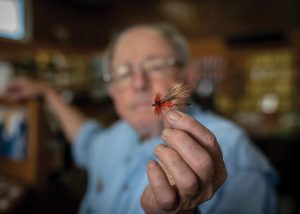 In the months since, the town has been reconnected to civilization, and an old stagecoach trail has allowed limited entry from Gardiner to the interior of the park. While Parks acknowledges that the hit to his business — and those of his Gardiner neighbors — will be felt for years, the changes the flooding brought to the Yellowstone River and its tributaries is profound. “When you run that much water, it peels banks,” he says. “Sections of river that had been defined for my lifetime by gravel banks at an angle of repose down to the water were just peeled away, replaced by vertical drops of 30 to 40 feet right down to the water. The Yellowstone is a new river. We’re learning it from scratch. Hardly anything is where it used to be.”

For Parks, with a lifetime of accumulated experience on these waters, this summer’s floods are a reminder that nature plays the cards. “It’s a little like the fires of ’88,” he says. “People were predicting the worst outcomes, forgetting that it’s what lodgepole forests do, baby. They burn down every 600 years or so. Yellowstone was not the blackened ruin that people predicted, after the short term. Having perspective a little longer than 30 days or even a year can help you understand and deal with the dynamism of natural systems.”

In the course of his lifetime, Parks has seen plenty of these changes. One of the first he noticed as a youngster was the reluctance of big brown trout to take surface flies, a trend he attributes to the U.S. Forest Service and its policy of spraying insecticide just as the spring’s salmon flies were hatching. “That population of surface-feeding browns pretty much went away in the mid ’50s with the spraying of DDT,” he says. “We still have brown trout in the river, of course, but they now have a tendency to revert to type and be primarily fish-eaters and nymph-eaters once they get bigger than 14–15 inches.” 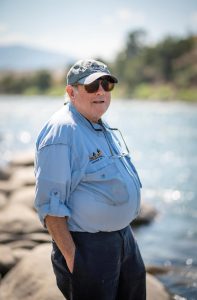 Parks surveys his home water on the upper Yellowstone River, just outside of the national park.

“I think the number of fish in excess of 18 inches in the river has dropped, but the distribution and ratio of cutthroat trout to other species has actually increased, particularly in the middle part of the [Paradise] valley because of improvements in management and having water in spawning tributaries,” he adds. “This is still a pretty spectacular fishery in many ways.”

That’s an assessment that Parks, who was a founder of the local Bear Creek Resource Council and who later served as chairman of the Northern Plains Resource Council environmental group, wants visitors to appreciate. The bounty of the region isn’t accidental; it’s the product of landscape-scale conservation and the tempering of individual advancement for a collective benefit. The resource of the park and the waters that flow off it are for everyone, longtime resident and temporary visitor alike. But it can take years, even decades, to recognize both the fragility and resilience of the place.

Meanwhile, invasive species like smallmouth bass, zebra mussels, and lake trout are nosing their way into the ecosystem. Climate change is warming waters and limiting habitat for trout. Rural subdivisions are sending more nitrogen-rich runoff into waterways. And more people are crowding into places where they expect to find solitude. Parks says each of those conditions are little knocks, trying to get our attention. “Nature has an amazing ability to heal itself, if we let it,” he says. “We’d be better off if people spent a little less time saying ‘Woe is me, everything is destroyed,’ and a little more time dealing with what we can control, while we still can. As for me, I don’t have plans to go anywhere, though I’m officially an old fart.”

He signs off with a reminder that, while he may be the conscience of the Yellowstone gateway, he’s also a scrappy businessman. “Stop in anytime. Always happy to have somebody buy something.”

Andrew McKean writes about hunting, conservation, and wildlife management from his home in Glasgow, Montana. The former editor in chief of Outdoor Life magazine and the current hunting editor, McKean is the author of How To Hunt Everything. He also contributes to a number of national publications.

Erik Petersen has been a Montana-based photographer and filmmaker for the past two decades. He lives in Livingston and loves getting his two sons and two bird dogs outdoors; erikpetersenphoto.com.