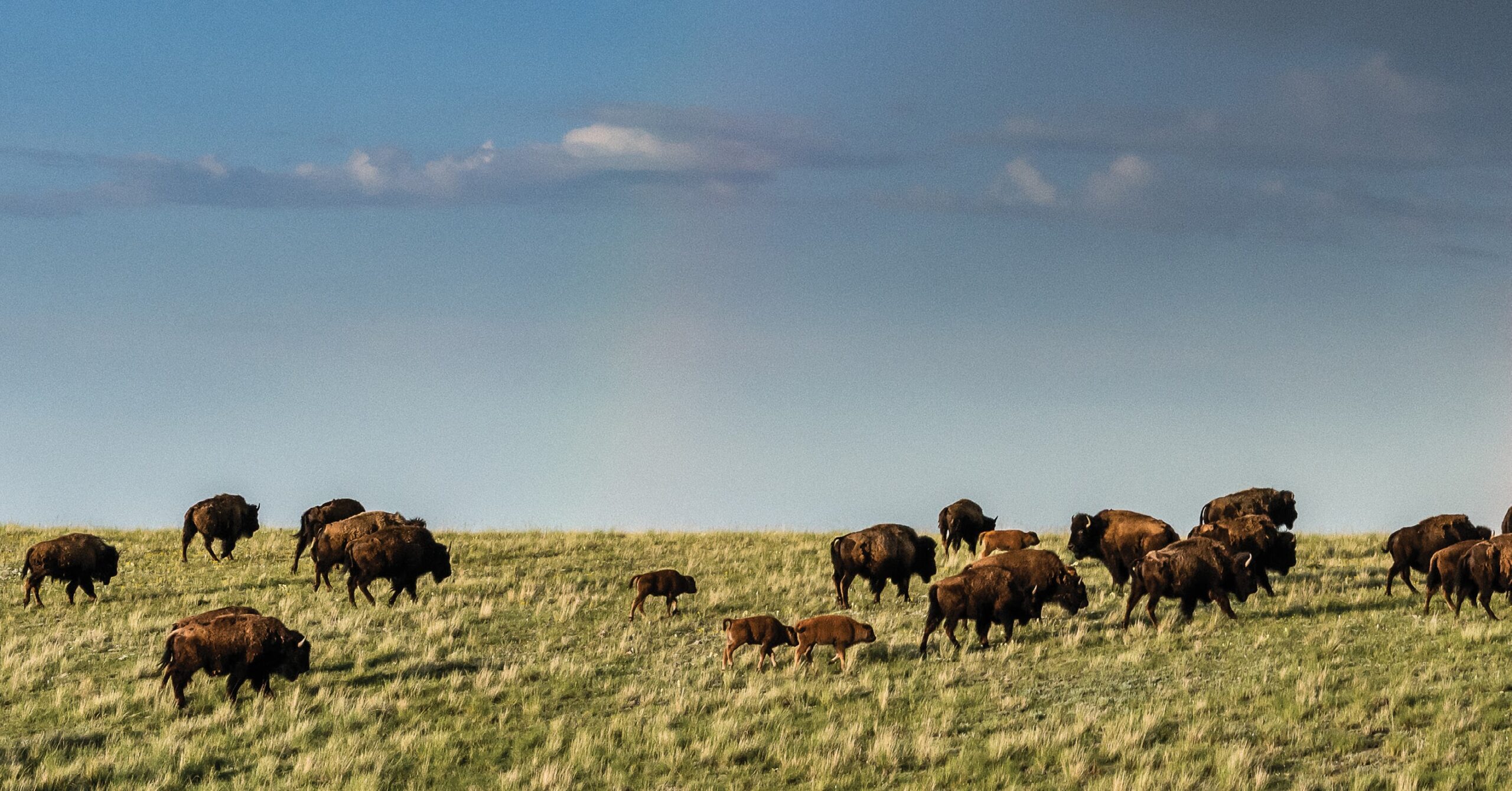 Robbie Magnan sweeps his tattooed arm over the landscape in front of us, where miles of shortgrass prairie rolls out toward a flat horizon obscured by smoke from a distant wildfire. There’s a pumpjack of a working oil well and a herd of about 200 bison grazing in the distance. This is the Fort Peck Tribes’ buffalo pasture, and Magnan is showing me around. We’re lucky to encounter the buffalo, he explains. “It’s a 27,000-acre pasture, and they go where they want. They could be just about anywhere.”

Today they’re here — not far off a bumpy two-track road — wallowing in the dust on a grassy bench that slopes down to a tributary of the Poplar River, which is, in turn, a tributary of the Missouri. I mention to Magnan that we must be near the center of the reservation — a 2-million-acre rectangle of prairie, wheatfields, and river bottoms in northeastern Montana. “This is the heart of the reservation, and not just because of its location,” Magnan says in a singsong voice that undulates like the rolls and folds of the pasture. “Look at a map of the rez. All the major river drainages form the legs and the hump of a buffalo.” 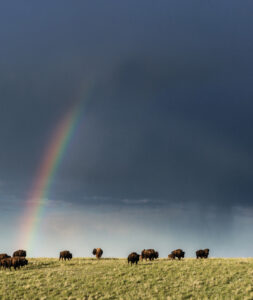 As the director of the Fort Peck Tribes’ Fish and Game Department, a job he’s held since 1997, Magnan oversees a handful of game wardens, enforces tribal hunting and fishing regulations, and conducts biological inventories of the reservation’s wildlife resources. But he’s increasingly becoming more widely known for the work he’s doing to bring the buffalo back to his people and restore the heart of the reservation. To Magnan and his tribal colleagues, they’re “buffalo,” the life-giving animal that’s central to their origin story. To the legion of biologists and researchers who visit Fort Peck to witness the remarkable comeback of these iconic American mammals, they’re “bison.”

We make our way through the herd that’s grazing in what the Fort Peck Tribes call the Turtle Mound Pasture on our way to the bison quarantine facility, a 300-acre high-fenced holding area with a heavy-duty corral and hydraulic squeeze chute at its center. If there’s a heart of the pasture, it’s this — the receiving facility for incoming bison that have been compounding the tribes’ herd for the past decade.

But these are not just any bison; they’re among the most recognized and genetically pure bison in existence, refugees that have wandered away from the peaks and protection of Yellowstone National Park, 400 miles to the southwest.

It would be easy to draw comparisons between the bison of Yellowstone National Park and the Sioux and Assiniboine tribal members of Fort Peck. Both were persecuted nearly to extinction, and both have survived in homelands set aside specifically for them. But in the case of the bison — remnants of the vast millions that once roamed the Great Plains — death awaits most of the ones that leave Yellowstone in search of winter habitat in Montana’s Paradise Valley. The low point was in the winter of 1996/1997 when more than 1,000 were killed by state and federal agents. 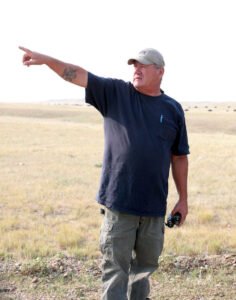 Robbie Magnan, the director of Fort Peck Tribes’ Fish and Game Department since 1997, gives a tour of the reservation’s buffalo quarantine facility and the Turtle Mound Pasture where a herd of about 200 grazes.

In order to recognize Fort Peck’s role in bison conservation, it’s important to understand brucellosis, a contagious disease that can cause cattle, bison, and even elk to abort their calves and remain sick with a chronic flu-like ague. Approximately 15 percent of Yellowstone’s wild bison carry brucellosis, and Montana’s livestock industry has been adamant that they not bring the disease into the state. That’s why Montana has established a zero-tolerance policy for wild, free-roaming bison. It’s also why they are routinely captured and quarantined in an open-air prison just north of Yellowstone’s border, where they remain until testing confirms they’re not infected. Those that are infected are slaughtered.

In a landmark ruling a decade ago, a judge allowed Yellowstone’s disease-free bison to go to the Fort Peck Reservation, where they would be further tested for brucellosis in the Turtle Mounds quarantine facility, then distributed to other tribes to be used for traditional cultural purposes. The path — procedural and physical — that brought Yellowstone bison to Fort Peck has been long and twisted, paved by the work of Magnan and other conservationists.

Magnan has a ragged laugh and an easy manner with visitors, who range from congressmen and Ph.D. biologists to tribal elders. Born on the reservation, he was raised in Colorado and attended boarding schools before returning in the 1980s and joining the tribal police force. After a couple of years, he became a game warden, and then was appointed director of the Tribes’ Fish & Game Department in 1997. 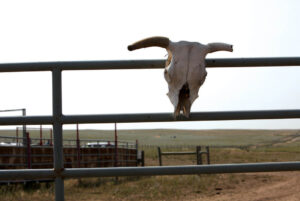 Magnan’s work includes overseeing game wardens, enforcing tribal hunting and fishing regulations, and conducting biological inventories of the reservation’s wildlife resources. But the main driver for him is to bring the buffalo back to his people and restore “the heart of the reservation.”

During his tenure, revenue from non-tribal hunting permits — for upland birds, waterfowl, and antelope — has increased. And Magnan has navigated the creation of what the tribes call their “business” buffalo herd, which is open to non-tribal hunters who bid on a chance to score trophy bulls or meat, and separate from the “cultural” herd that’s reserved for tribal purposes.

“Tribal council has been talking about restoring buffalo since the mid-1980s,” says Magnan, who wears a traditional ponytail and has a paratrooper tattoo from his time in the service. “The idea was to restore that cultural connection, but there’s a high cost to raising buffalo, and we started offering hunts mainly to create a self-sustaining buffalo program. I made the argument that we didn’t have enough buffalo to do both — sell hunts and still have a cultural herd. But then Yellowstone Park asked who was interested in taking graduates from its [brucellosis] quarantine program. I saw an opportunity. I thought it would be great to start two herds, a cultural herd for the people and a business herd to make money to fund the program.”

It’s been a widely recognized success, and the creation of the Fort Peck quarantine facility has given the National Park Service a destination for genetically pure bison that might otherwise end up as roasts and burgers. And the Park Service remains tightly connected with Fort Peck. “Any time Robbie calls, I come,” says Chris Geremia, Yellowstone’s lead bison biologist. “That’s how well-respected he is in the bison conservation community. He’s the man.”

The business herd remains to be a money-making proposition, but Magnan says he’s most proud of the cultural herd’s success. “We didn’t have buffalo for our people for over 100 years, and we almost lost all the ceremonies that are connected to the buffalo,” he says. “But now they’re back and the ceremonies are coming back. With the ceremonies, we’re seeing more interest in learning our language and remembering other aspects of our culture.” 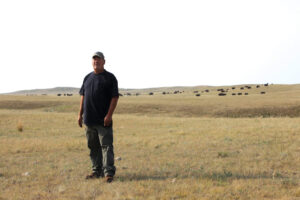 Meat from bison is utilized in powwows and other ceremonies. It’s also part of the tribal food programs, used as a way to reconnect members with the animal that fed their ancestors, while also reducing the prevalence of diabetes in the community. “It’s a lean, healthy meat,” says Magnan. “There’s a creation story that buffalo were put on earth to keep us alive. The buffalo fed us when we were starving and gave us shelter when we were cold. Ever since the beginning, the buffalo has taken care of us. Now they need our help. It’s our turn to take care of them.”

Magnan turns away from the buffalo that are threading their way through a low pass in the grassy hills. “My job is to make sure they’re here, and that they’re taken care of,” he says as he slams the door of his pickup. “When it’s my turn to go to the other side, I hope that’s what my ancestors say when I meet them, that they’re glad I took care of our buffalo.”