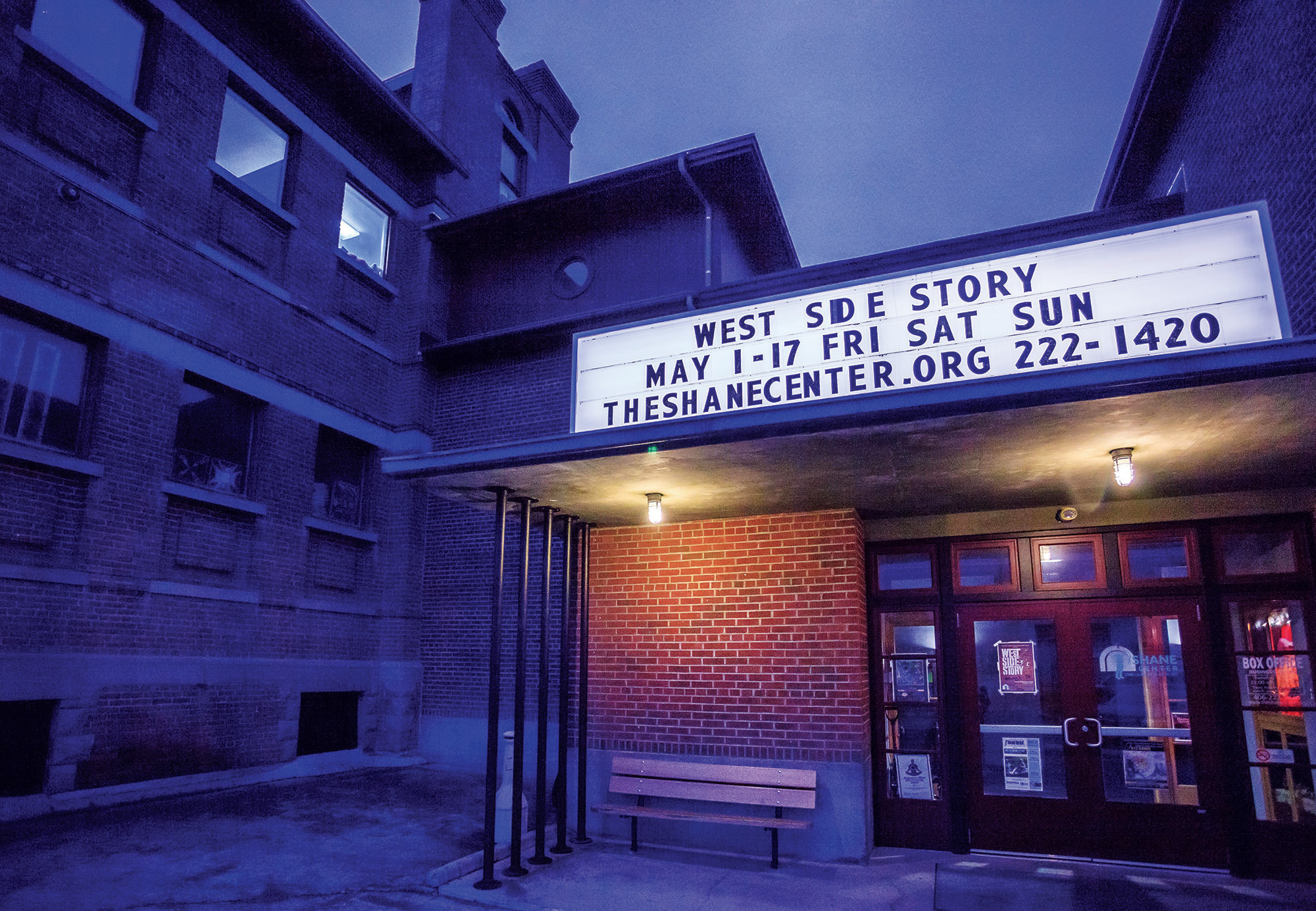 29 Jul Local Knowledge: A Place for the Arts

It’s a big night at Livingston’s nonprofit Shane Lalani Center for the Arts. About 45 teenagers from the town’s middle and high schools are bustling about in the basement dressing rooms, their voices fill the whitewashed stone hallways of the 113-year old building with excited chatter. As they don costumes and makeup in preparation for the opening night of West Side Story, dedicated theater mom Karen Richards dodges hairspray and selfies.

This is the fifth school production in the Shane Center’s Dulcie Theatre since 2010 when the facility first opened. However, many of the kids have been acting since they were 6 years old, thanks to the Shane’s artistic director W. Russell Lewis; his nonprofit theater company, formerly Crazy Mountain Productions, previously operated for a decade out of the 5,000-square-foot Firehouse Five Playhouse south of town.

In comparison, the new 33,000-square-foot Shane Center is a palace. Six years in the making, three and a half of which included renovation and new construction, the arts center is the brainchild of 40-year-old Lewis. He is to the Shane Center what Kevin Costner’s character was to the baseball field in the 1989 film Field of Dreams. Lewis heard the message: “If you build it, [they] will come.”

They have. During its last fiscal year, the Shane Center welcomed 21,500 people through its doors. Other numbers are equally impressive: The center served 1,002 youth with outreach programming, managed hundreds of private rentals, hosted 83 community theater performances and 17 outside performances, 152 classes and 21 film screenings. According to a 2014 economic impact analysis by the Northern Rocky Mountain Economic Development District, the value added to the local economy was $671,918.

The true value, of course, is the art created within its walls and the myriad ways those works enrich the community. As Lewis says, “On a daily basis we have people interacting with one another in some sort of creative enterprise.” To him and executive director Kelley Dowdell, this is only the beginning.

The true beginning was an Aha! moment Lewis had while on a stroll with his wife in December 2008. At the time, they lived a block away from what was then the East Side School. The venerable, two-story brick school had been sitting vacant for nearly 15 years. It was owned by the City of Livingston, which had purchased it from the school district in 1994. The city had attempted to use it as office space, but found it too expensive to heat, so the old school became a glorified storage facility instead. It was a rather undignified fate for a 1902 building designed by architect Charles Emlen Bell, who also designed the Montana State Capitol in Helena.

Lewis’ vision was this: Why not approach the city about making the school and its gymnasium annex (added in 1946) into a multiuse community arts center? His nonprofit theater company had outgrown the Playhouse, and Lewis felt he had hit the limits of professional and creative potential in that location. It was time to do something big.

The challenges to this dream were many. Not only is Livingston a small town of just over 7,000 people, a significant portion of its citizens lives below the poverty line. So although the town is full of immensely creative and talented people, not all have the means to donate time or money. In addition, the building was outdated: the plumbing, mechanical and electrical systems needed modern updates.

There was, however, an even bigger obstacle — the economy had just crashed. People were losing their homes and jobs. Was feeding their soul with art a necessity? To Lewis there was no question. “Arts are vital,” he says. “A lot of people view the arts as superfluous, nice but not necessary. I think the opposite.”

Lewis also believed that people needed something to feel hopeful about during hard times. His board of directors agreed. “The bottom falls out of the economy,” he laughs, “and that’s when [we] decide to launch a large fundraising campaign to build an arts center.”

Then-board president Storrs Bishop began talking to city officials. Seeing an opportunity to unburden tax payers, they decided to give the building to the theater company on three conditions: that the city retain use of its storage space in the basement, the building be operated in a manner consistent with the nonprofit organization’s mission, and the building’s $450,000 appraised value be monetarily reinvested back into it within three years.

Three years was a lofty goal, but the project commenced. Architect Kirk Michels kindly donated his time to design and oversee renovation of the 30,000-square-foot school and annex, in addition to new construction of a 3,000-square- foot scene shop and prop storage. The original budget was $1.25 million. Lewis became artistic director and Dowdell took over as executive director. She and current board president Kory Gunderson led the capital campaign, proselytizing the organization’s mission of “strengthening community through participation in the arts.” As they progressed, one thing became clear: Livingstonians value and prioritize the arts. It was still a tough sell.

Then, right before the center’s first production opened, Salim “Sal” and Carol Lalani got involved. The couple lives in Bozeman, but Carol grew up in Livingston. Her mother Dulcie resided in town, and the couple’s son Shane was born here. The family had long enjoyed performances at the Firehouse, so they knew Lewis.

The Lalani’s financial participation in the center was a game changer. Not only did it help make the project possible, it created a snowball effect. Other donors, large and small, jumped on board because they saw the dream becoming a reality.

“I felt it was a wonderful example of public/private partnership to benefit the community,” Sal says. It was also a way for he and his wife to honor their beloved son, Shane, who had died unexpectedly on June 13, 2008, from diabetes-related complications. Twenty-four-year-old Shane was a tennis champion, a student at DePaul University and a lover of the arts, so the Lalanis donated at a level that gave them naming rights. The center bears Shane’s name, the Dulcie Theatre that of Carol’s mother. “We are very pleased to see how it has turned out,” Sal says. “It’s a destination for hearts and minds.”

The Shane is truly this community’s center. At any given moment you can stroll the halls and hear someone singing, witness a dance rehearsal or talk to a photographer emerging from the Black Lab darkroom. Theater production is the center’s core activity and programming includes five community theater and high school productions each per year, plus young actors’ workshops. The center also hosts special events including Shakespeare in the Parks, the Livingston Film Festival, Symphony at the Shane and performances by the Muir String Quartet.

Venues include the 165-seat Dulcie Theatre, the Mike and Eve Art Rehearsal Hall, a spacious lobby, multiple community classrooms and a ballroom with adjoining caterer’s kitchen. All these are frequently rented out. In fact, Sal will tell you with delight that Park High School held its 2015 prom in the ballroom. In addition, other organizations rent space for presentations and fundraisers, weddings and memorials. A few years ago, for example, the Livingston Food Pantry held a fundraiser in the Shane Center hosted by actor Jeff Bridges that helped make the new Livingston Food Resource Center possible.

West Side Story is now underway. The Jets and Sharks are battling it out in a sad tale of gangs and teenage angst based on Shakespeare’s Romeo and Juliet. The obviously talented actor playing Action is 14-year-old Payton Murphy. He has been with the company since he was 6 years old, and has performed in an average of two to three shows a year ever since.

When describing the impact of the Shane Center, Murphy says it best: “I have a lot of friends from the theater that I never would have met if I’d never gotten into acting. … The more I think about it, the more I realize how much this place means to me. Being able to do something that I love with people that I love is kind of a great thing.”

Onstage actors Andrew Reichert and Abby Romans, playing Tony and Maria, sing Stephen Sondheim’s lyrics in a duet of “Somewhere.” “There’s a place for us … I’ll take you there … somehow, someday, somewhere!”

It seems that the someday is now, the somewhere is the Shane Lalani Center for the Arts. For the actors and their families, as well as many others who enjoy the facility, the Shane is a place where pursuit of the arts creates shared memories to bring the hearts and minds of the community together. 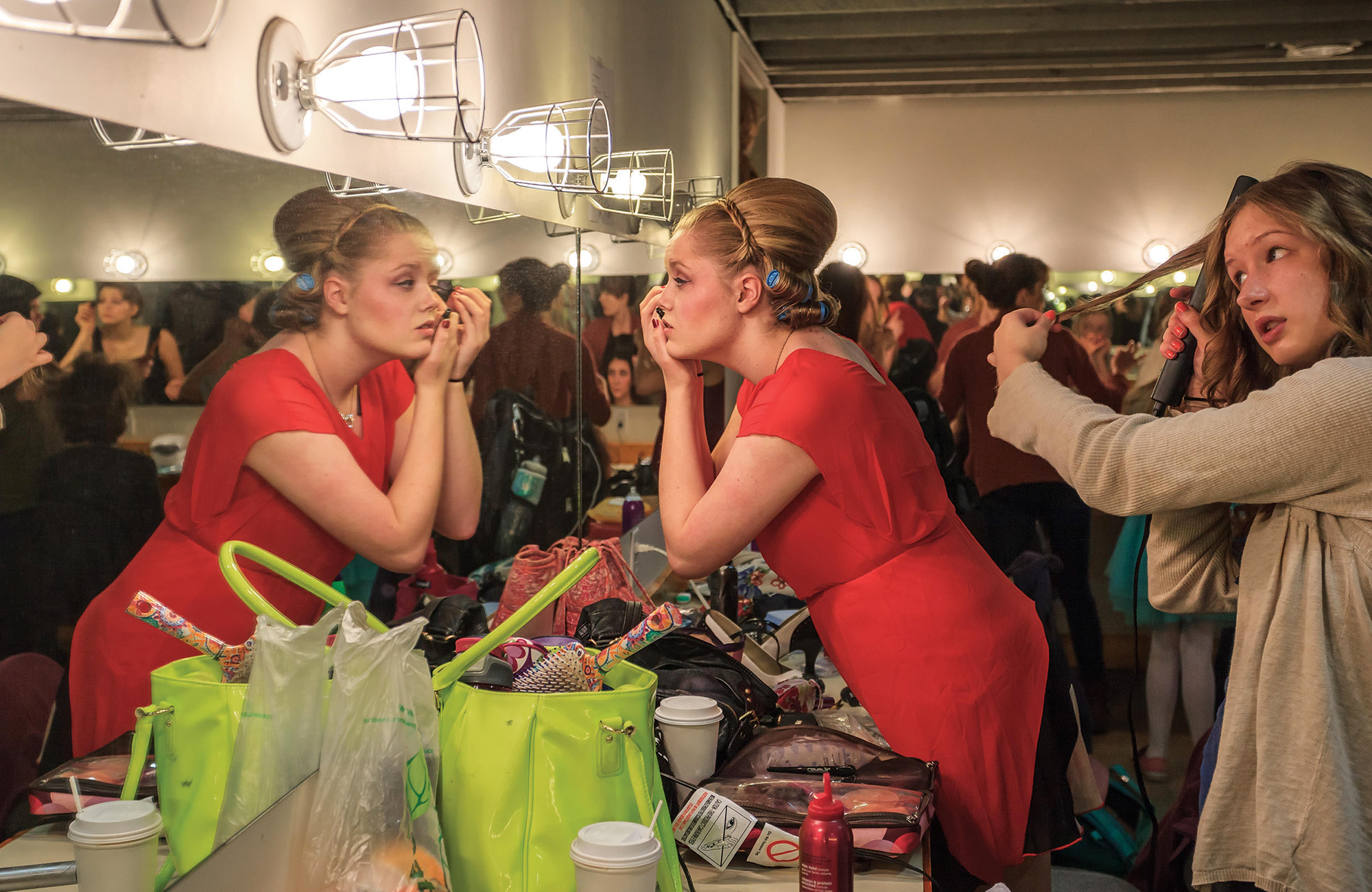 The women’s dressing room bustles before a performance of “West Side Story.” 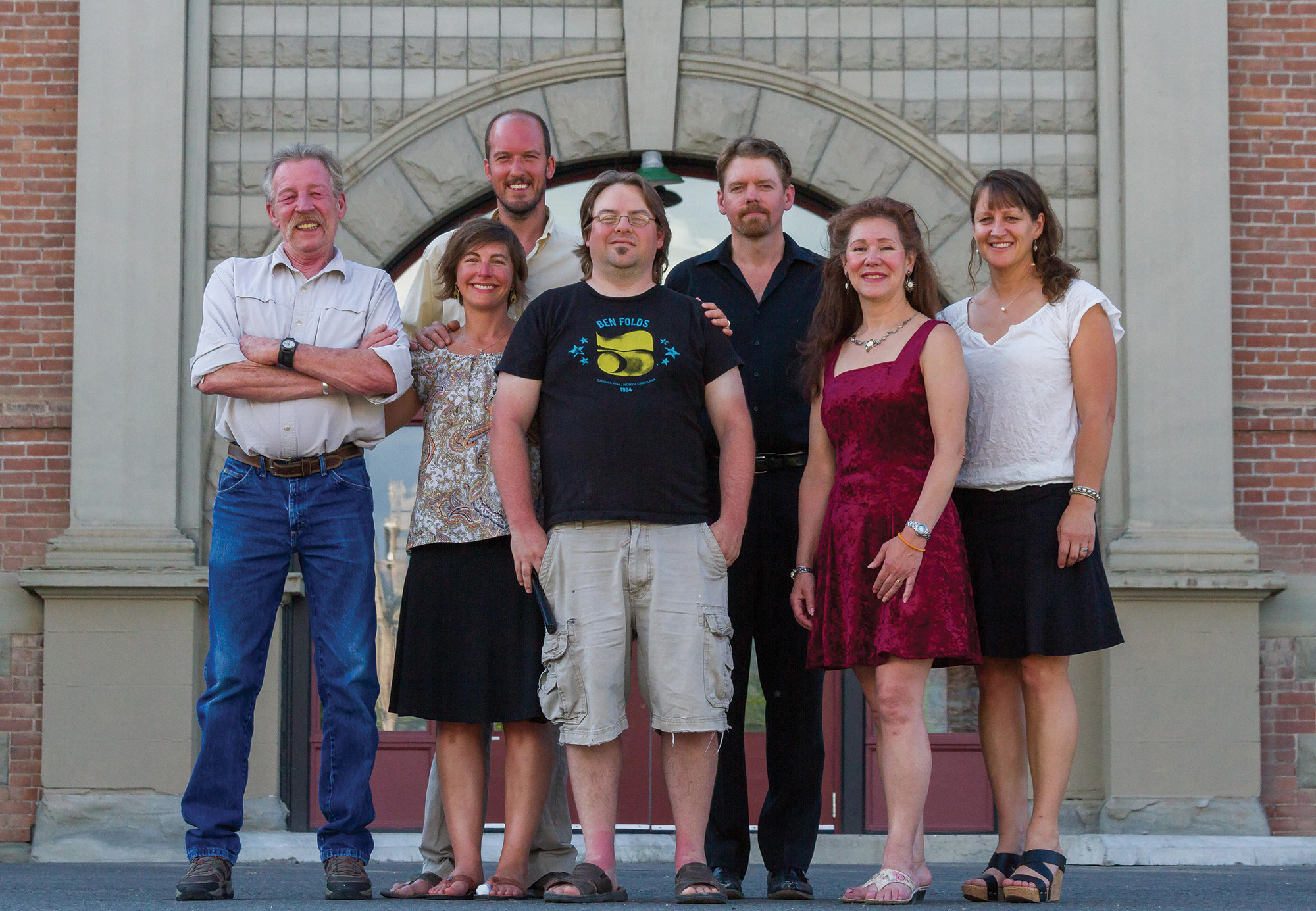 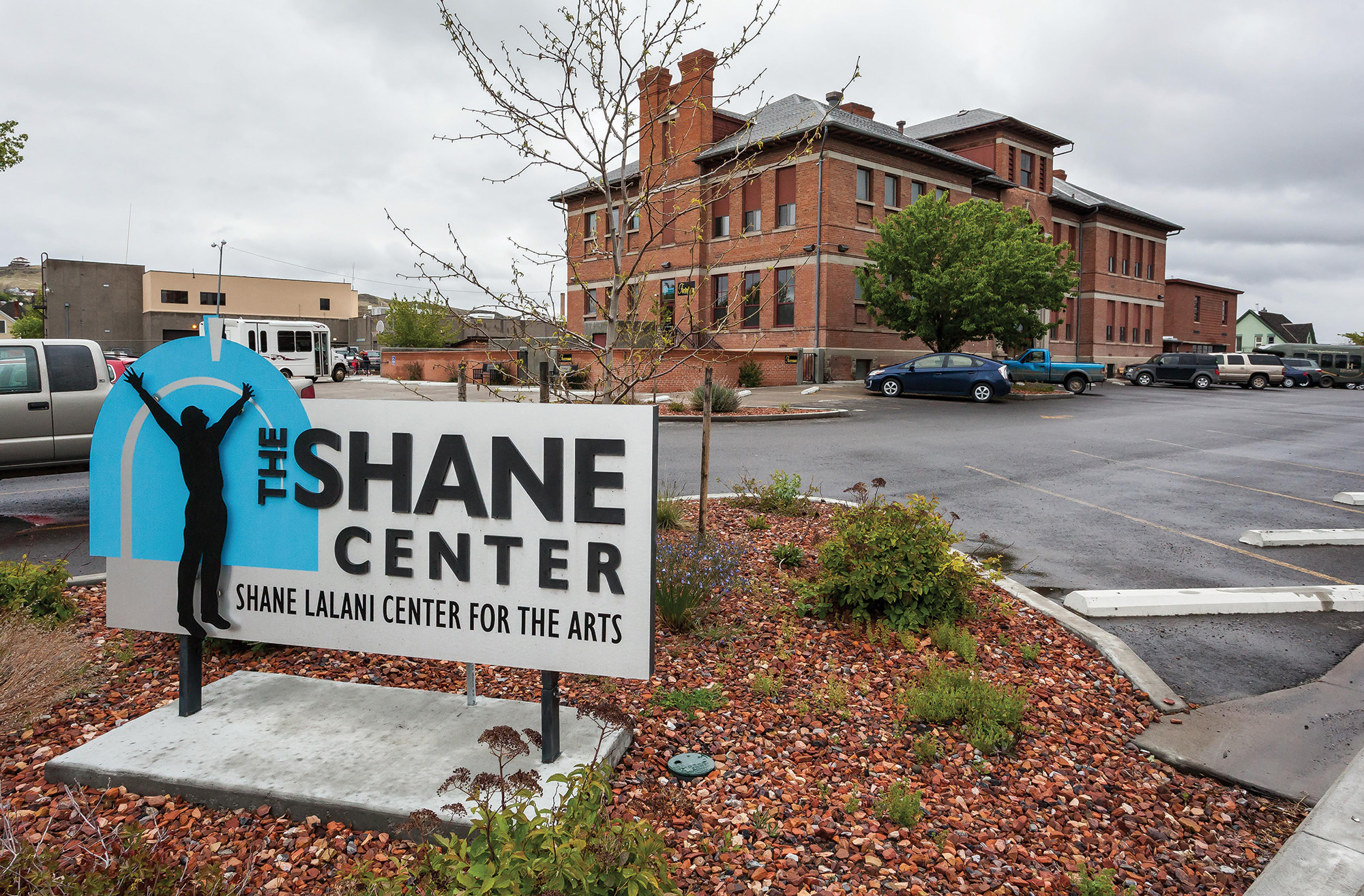 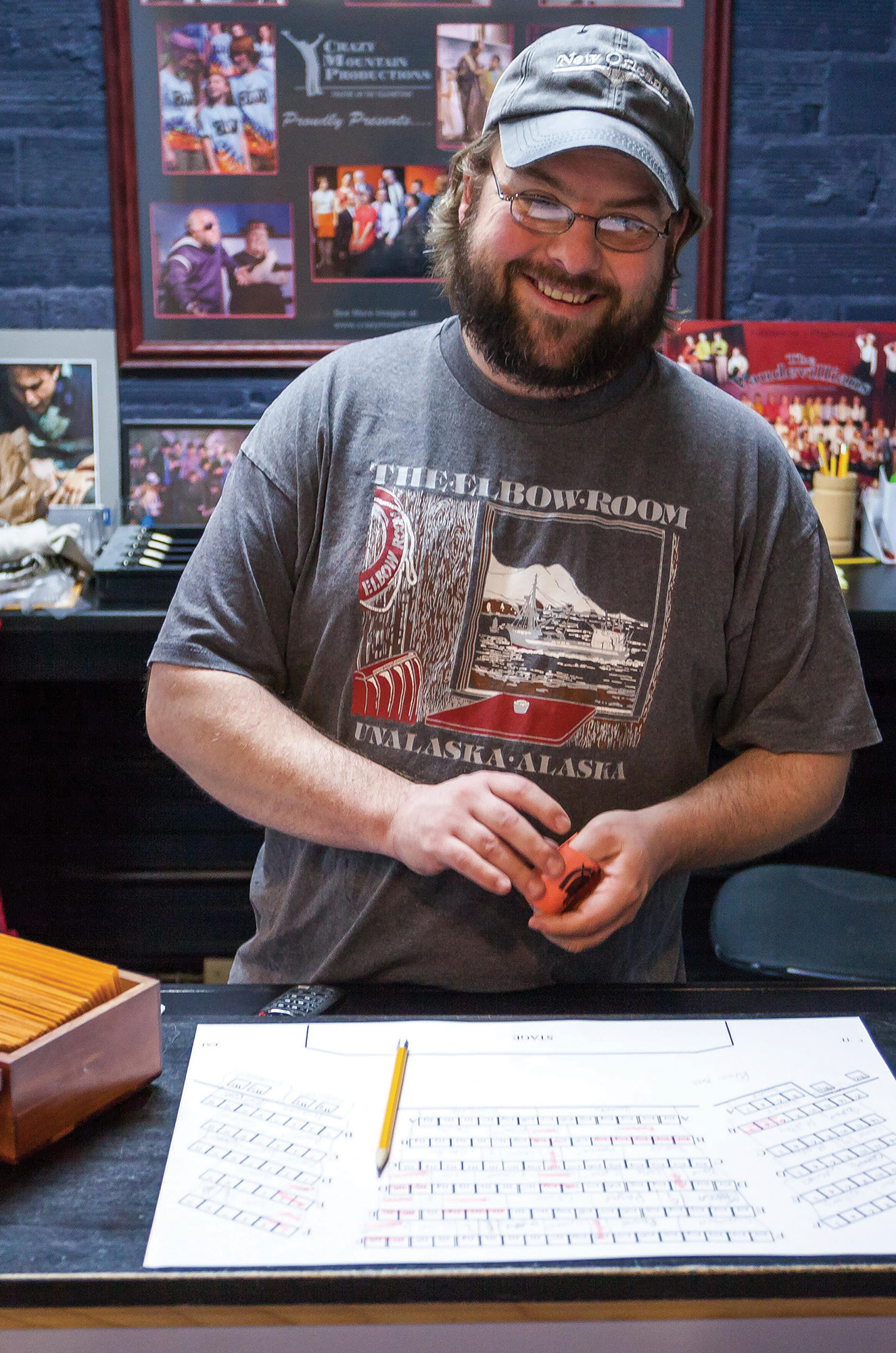 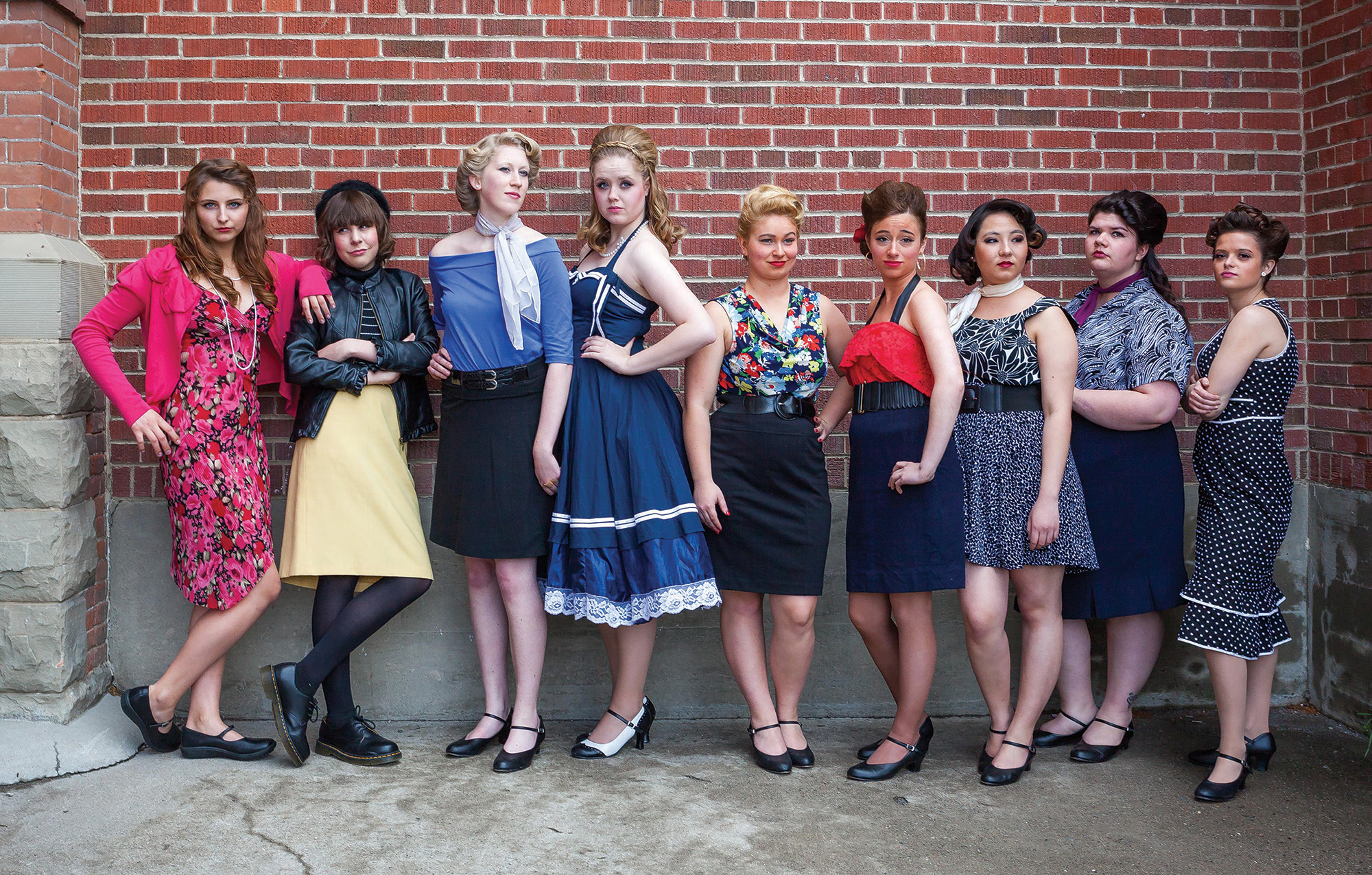 The female cast members of “West Side Story.” 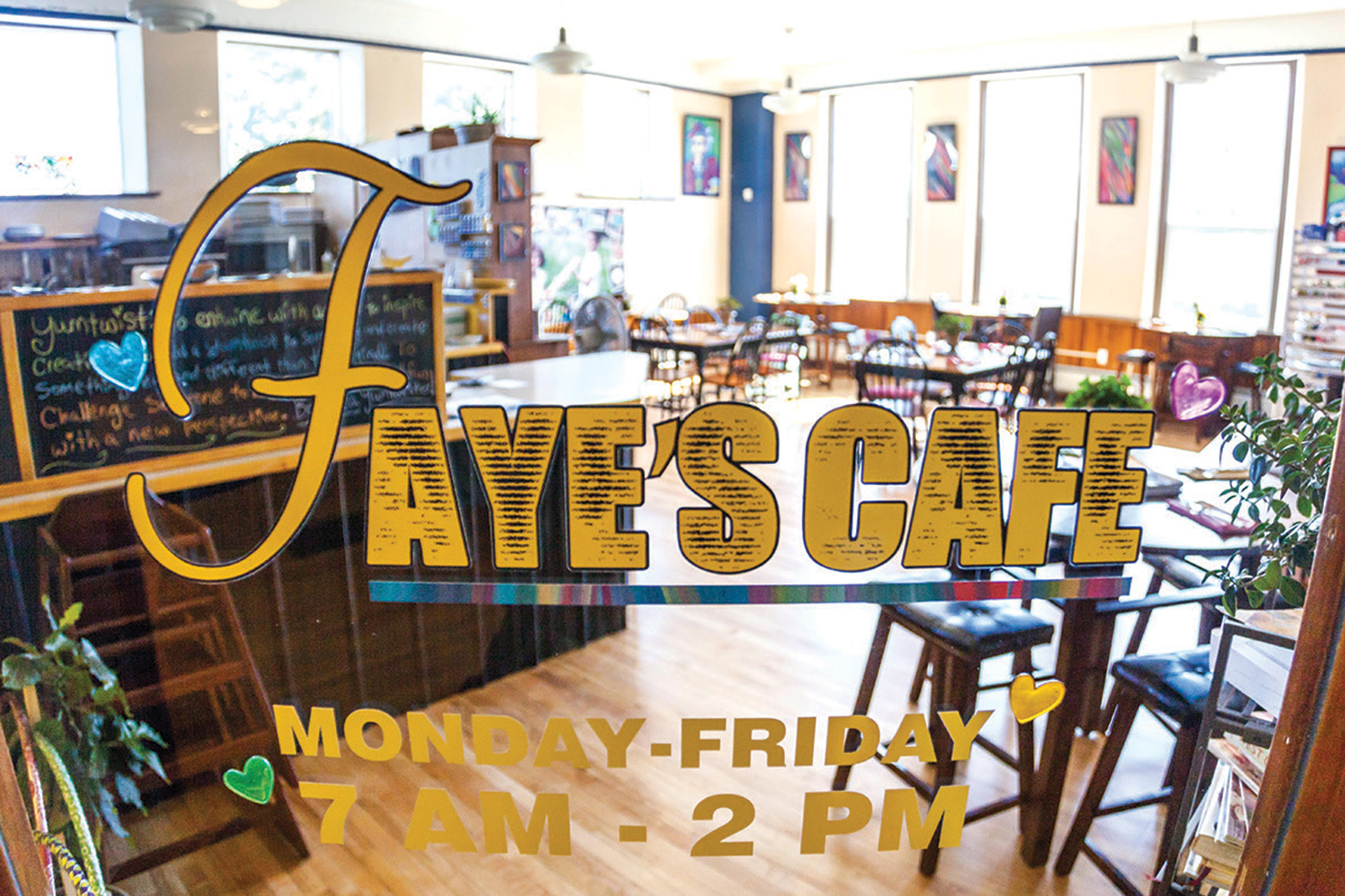 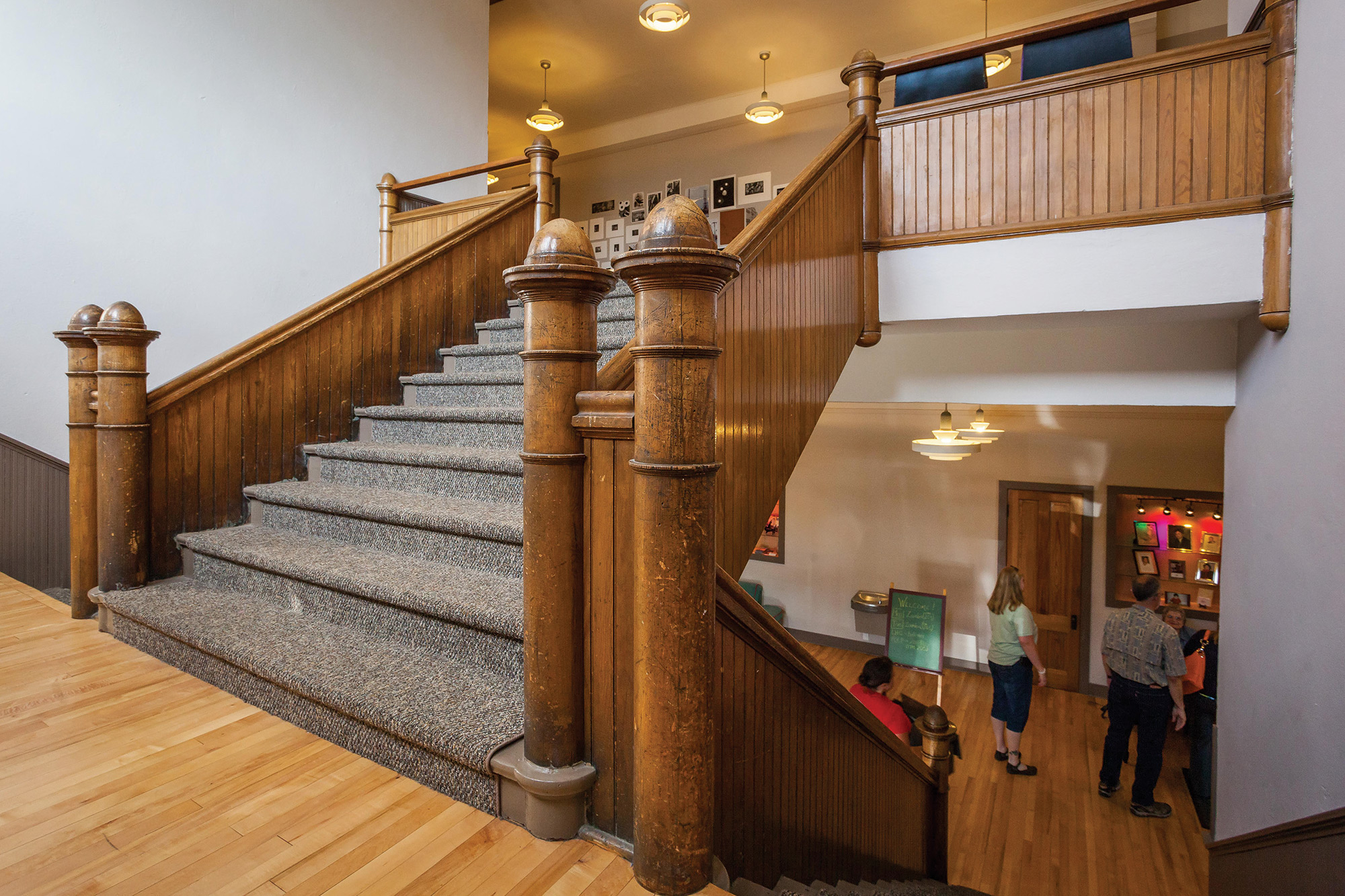 The original staircase from when the arts center was the East Side School.

The students of Park High School and Sleeping Giant Middle School brought the Broadway classic “West Side Story” to the Shane Center last May. 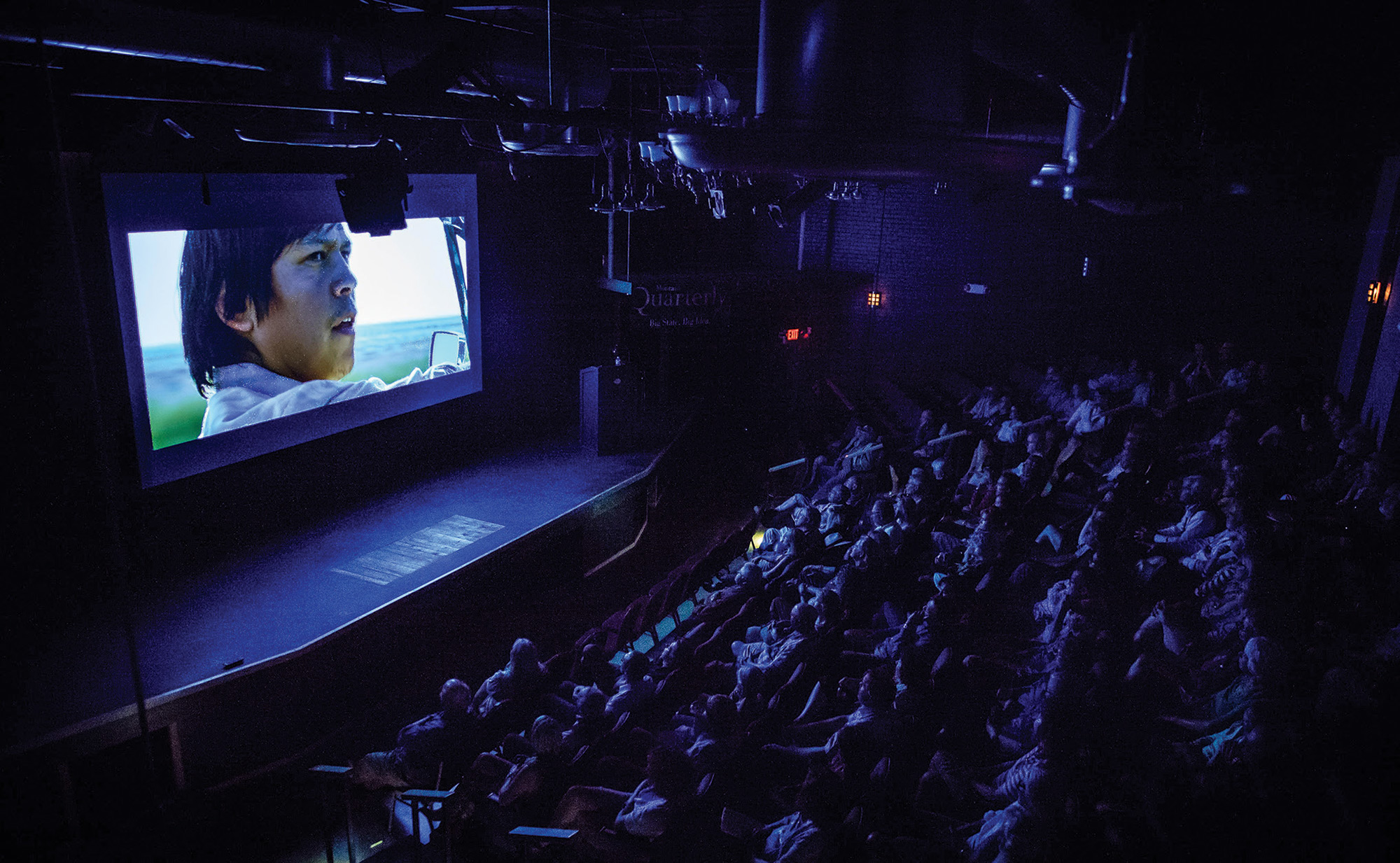 The Dulcie Theater hosts a showing of Montana-made, “Winter in the Blood.” With 165 seats, it is the largest auditorium in Livingston. 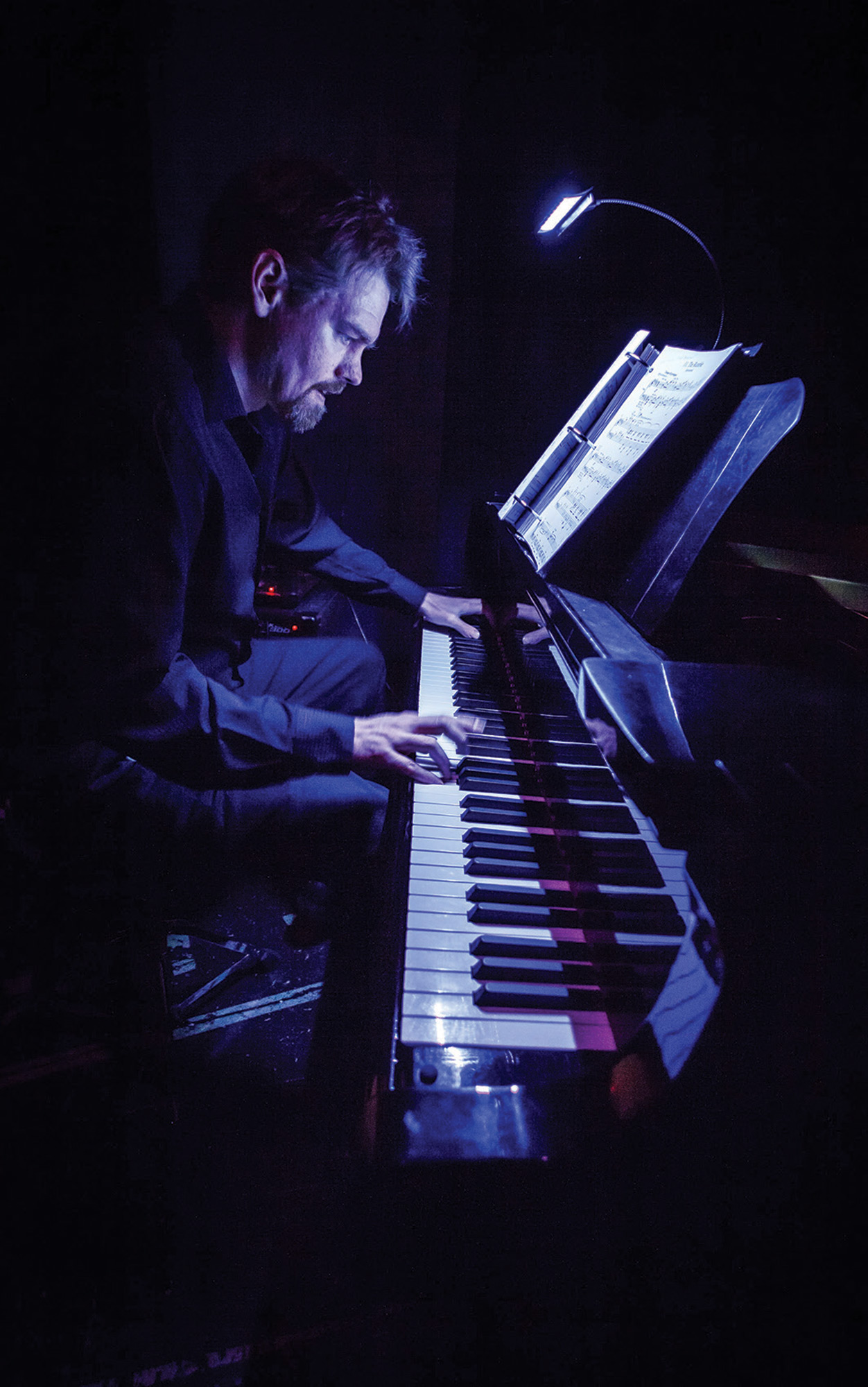 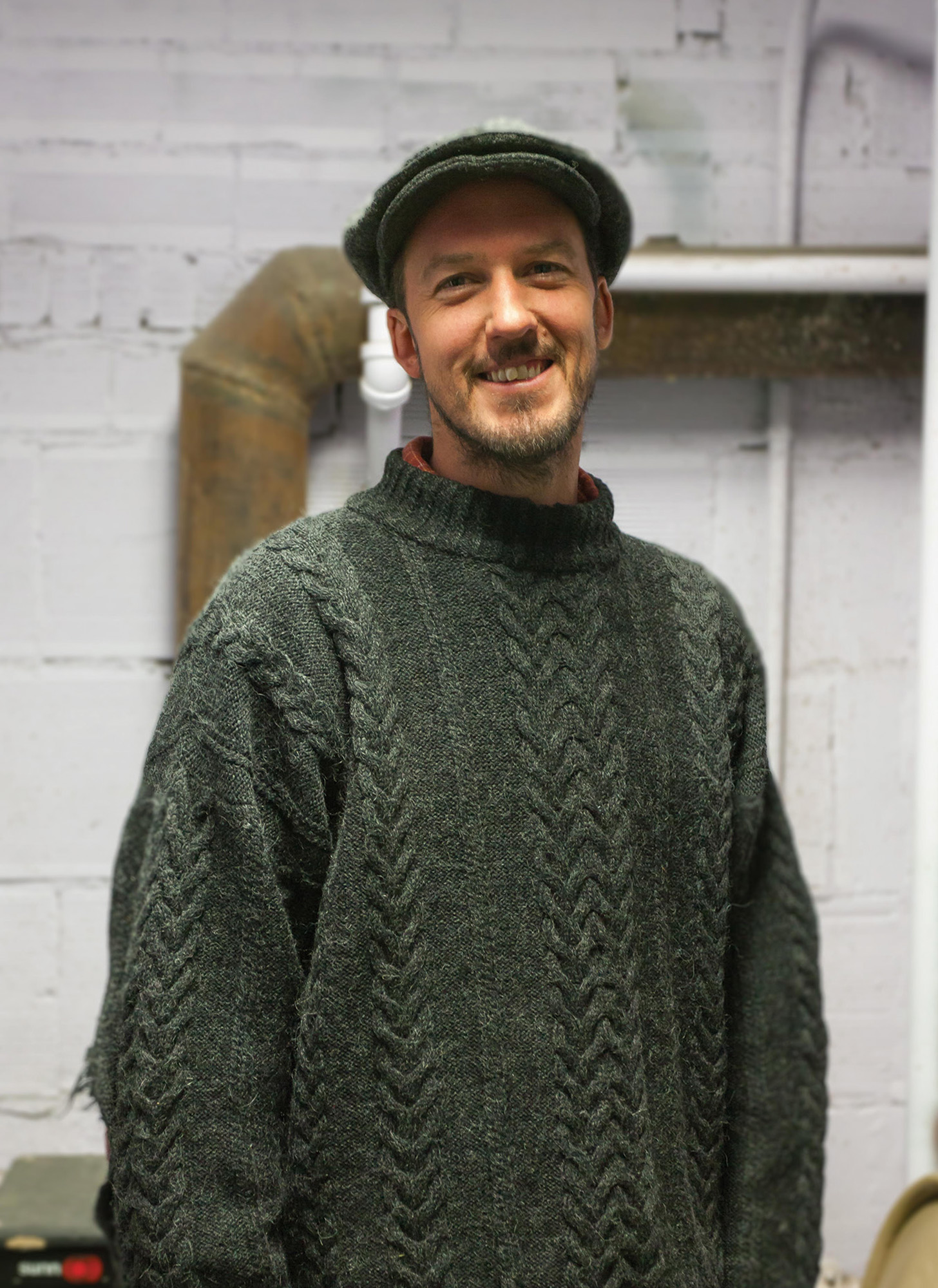 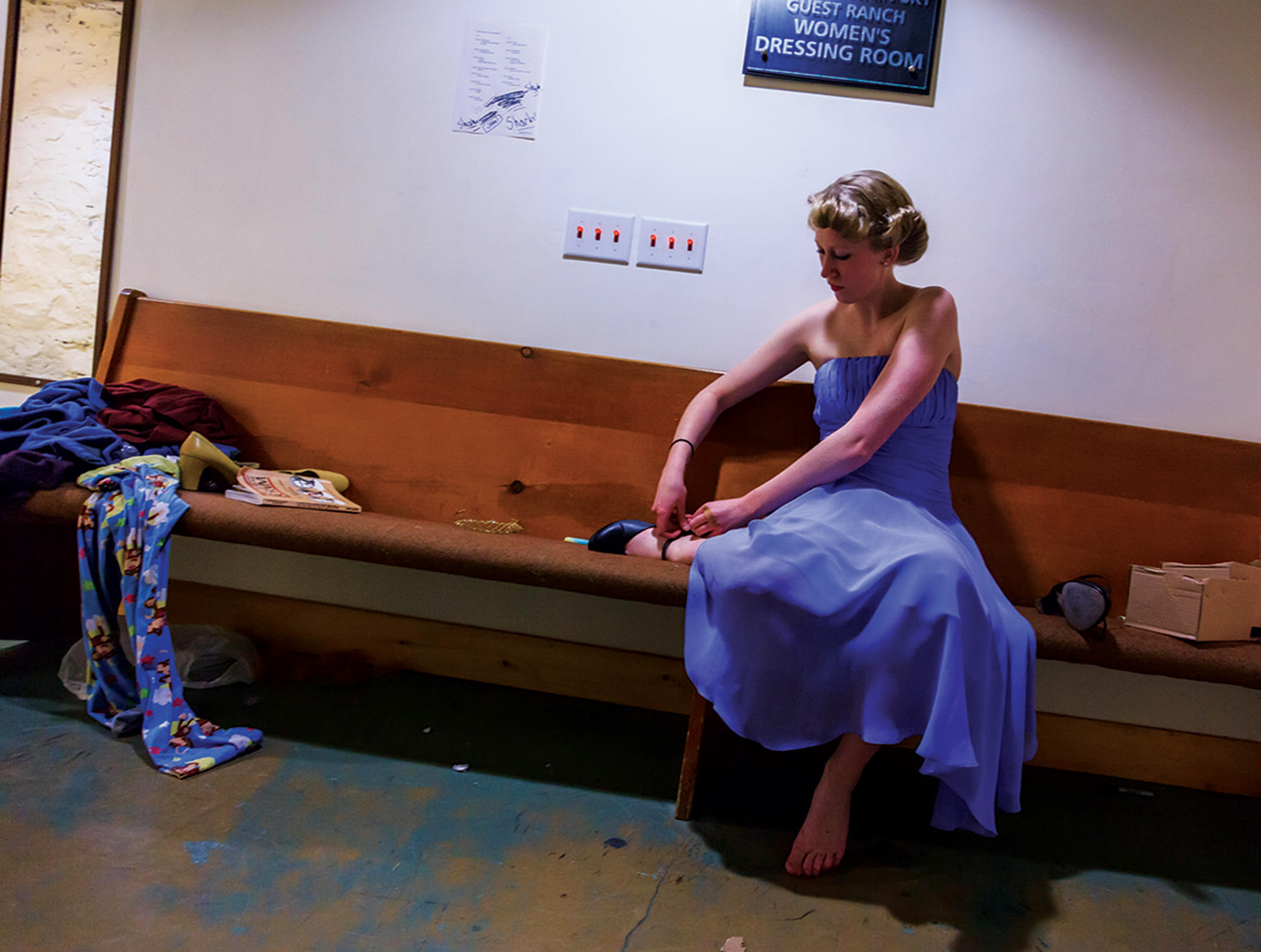 An actress readies for the community production of “West Side Story.”