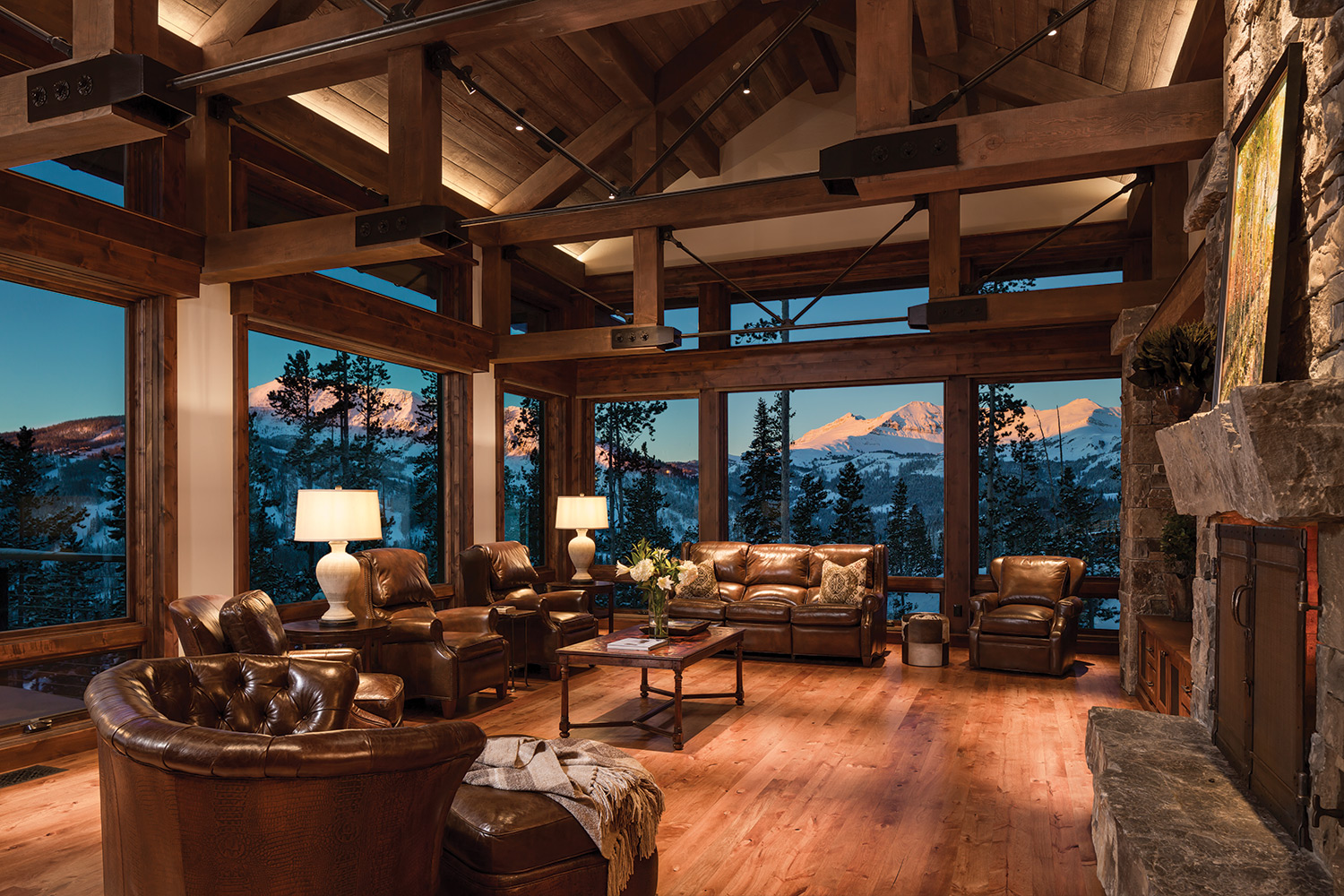 Owners Terry and Rick Rashid purchased their lot largely because of its location. There are spectacular views of four mountains, three of them skiable.

12 Apr Living in the Landscape

Sited on a steep slope that faces four mountains, three of them skiable, this Yellowstone Club home was designed with those views in mind. Its study looks out to Lone Peak, its great room to Cedar Mountain, its dining room to Pioneer Mountain — and its master suite to both Pioneer and Andesite mountains. 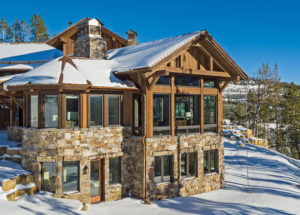 The owners wanted the home to feel as though it belonged in the environment, and used large timber beams and exterior stone to help tie it into the hillside. 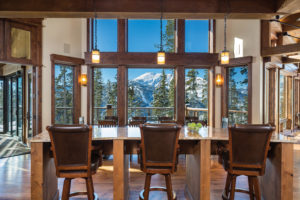 Mountain views drove the layout of key areas of the house.

The design was client-driven and site-specific from the get-go. “We went into the project with a vision of a lodge-style home that would allow a large number of family, friends, and guests to enjoy the beauty of the Montana countryside,” said owner Terry Rashid. “We wanted the home to give you a feeling of actually being outdoors.”

That meant not just an abundance of huge windows, but also a design that nestled the home into the landscape. Every bedroom on all three levels offers a door that opens up for a casual stroll through nature. Its “four seasons” room with a pool and spa features moveable NanaWall glass windows on either end. They can slide back to merge the room with its surroundings — a patio, a fire pit, and plenty of seating await right outside. 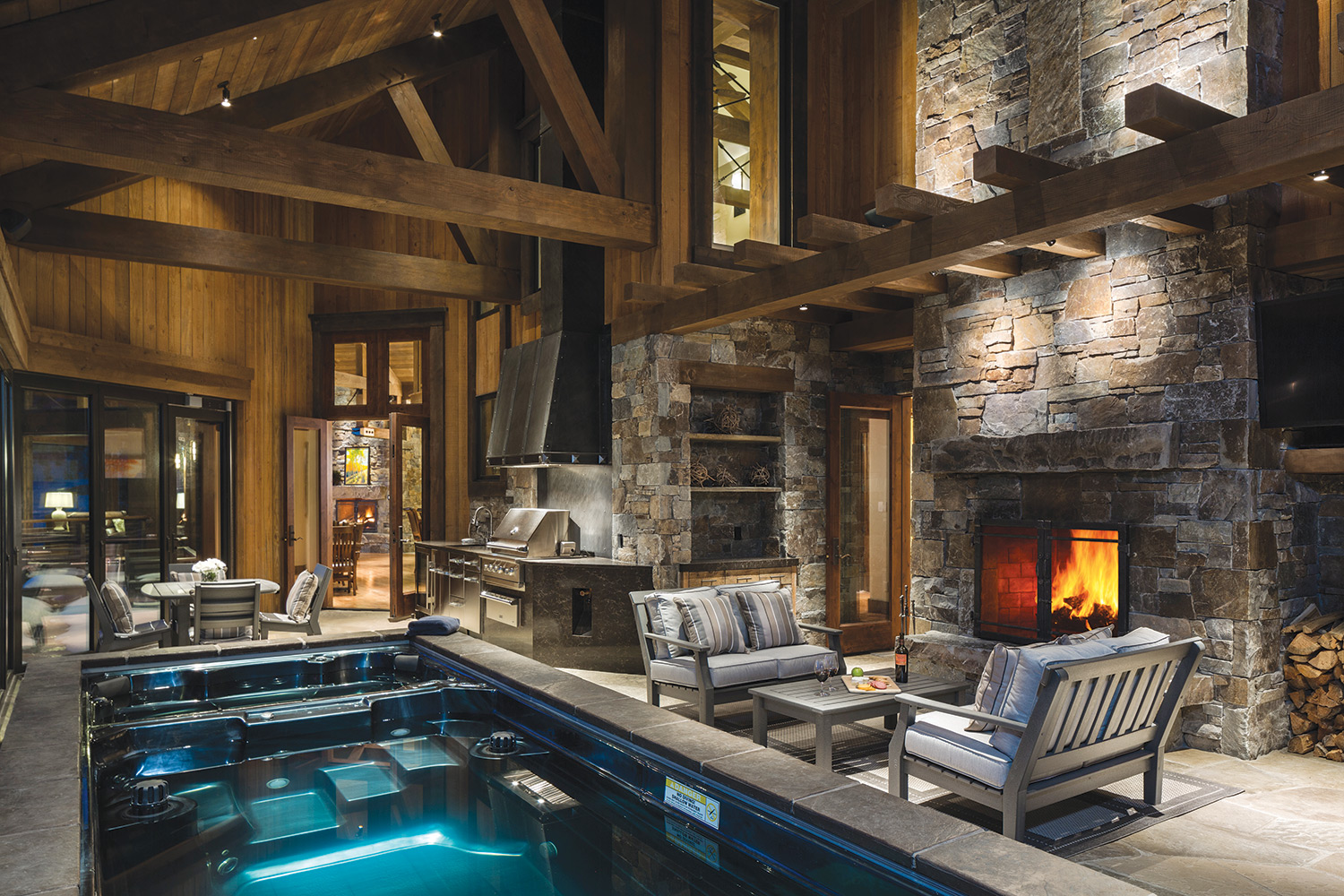 The main floor has a “four seasons” room with an Endless Pool and Spa for swimming and lounging.

The landscape architects worked to keep clutter to a minimum and to downplay their interventions. “We wanted to let the grade come back and meet the home, and we pushed one fire pit and staircase to cascade away from the southeast corner of the home,” said Troy Scherer, of Design.5 Landscape Architecture out of Bozeman. “It looks more like an amphitheater in the natural environment — there’s seating around the fire pit and along the stairs on that side of the house.” 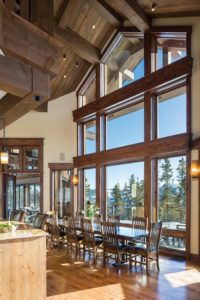 The dining room is aligned to display Pioneer Mountain. 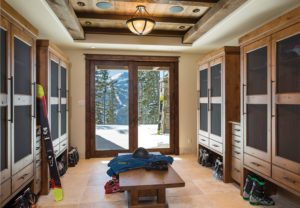 Skiers can come out of the house, put on skis, traverse to the ski trail, and be on their way.

Easy access to local skiing was imperative, so Alan McClain and his associates at Big Sky Landscaping built a small road, 6 feet wide, that slips downhill across the ridge. “You can come out of the house, put on your skis, traverse to the ski trail, and be on your way,” he said. “From the house you can get to one of the Big Sky lifts easily, or with the trail we built, to the Yellowstone Club trail systems — and at the end of the day, come back to the same trail you came out of.”

The Rashids may have started out with their own ideas about how to meld their home into its environment, but they turned to Jamie Daugaard, principal of Centre Sky Architecture, for formal guidance and execution. “They asked us to put together a preliminary plan that they had begun with,” Daugaard said. “They wanted to work with certain roof lines and views — they definitely had a layout that had started to happen based on the site, and we integrated our ideas with theirs.”

The result was a collaborative process between architect and clients for most of the home’s interiors. “They’d put a lot of thought into the plan they were looking for,” he said. “And then they said to us: ‘Now, make it work!’” 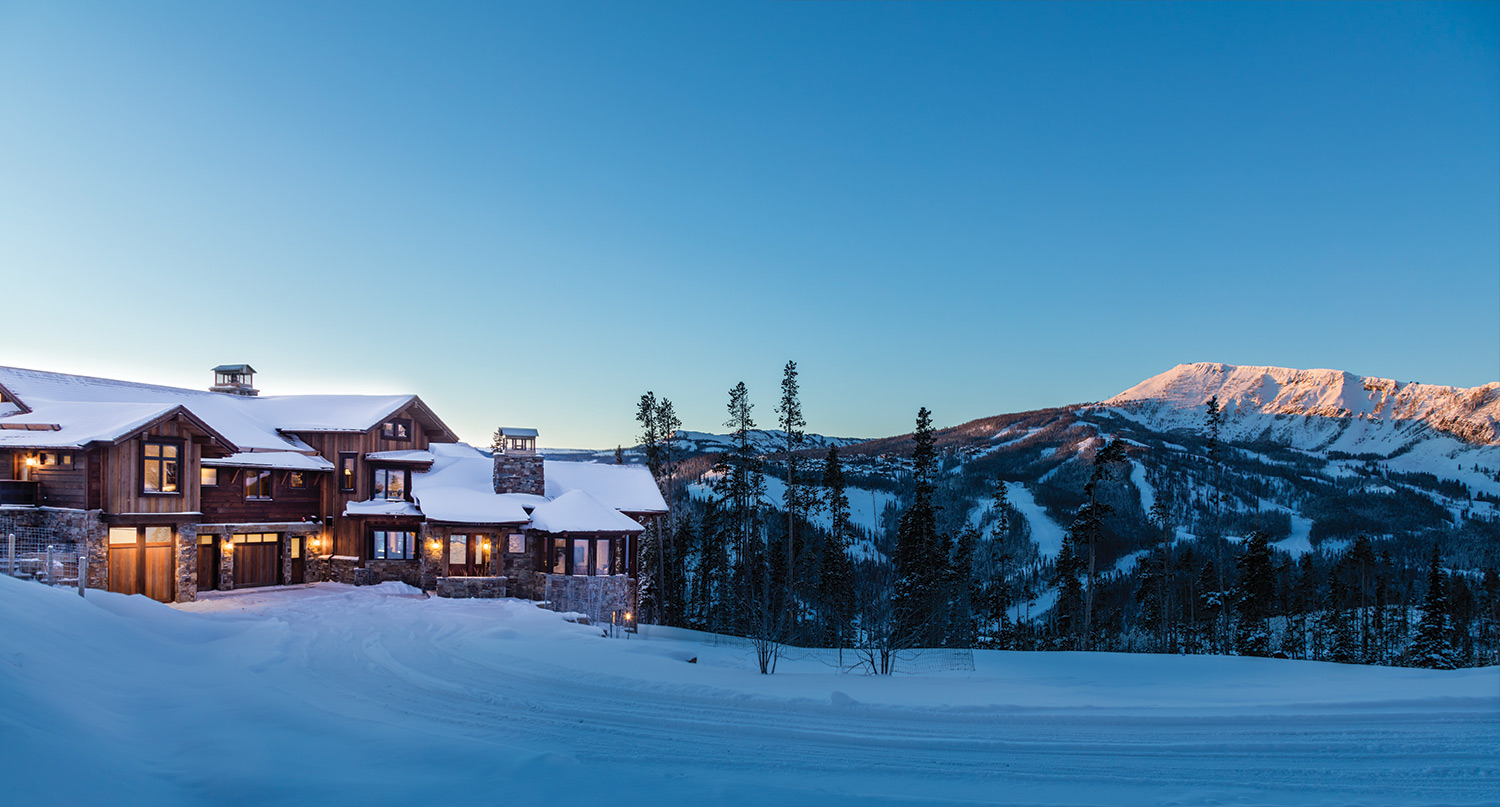 The Rashids had a vision of a lodge-style home that would allow a large number of family, friends, and guests to enjoy the beauty of the Montana landscape.

They did that by feeding off each other’s ideas — like how to handle the long hallways in a house that totals 10,700 square feet. To break up the upstairs hall, Daugaard suggested a large, sliding barn door on one side. “We carried that further and had two sides of the home theater room open up to connect strongly with the billiards area,” Rashid said. “I wanted to be able to have that room serve a dual purpose. When the doors — really, they’re moveable walls — were closed, it would function as a traditional home theater.” 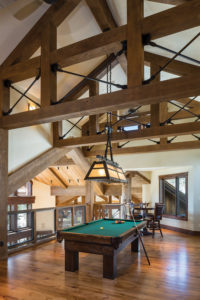 The upper floor has a billiards/card room and a home theater.

Downstairs, where the interior flow had not been worked through entirely until Daugaard and company got actively involved, they linked up the kitchen, dining room, and the “four seasons” space that opens to the outdoor landscape. Overall, the interiors are integrated into the home’s steeply pitched site.

“We coordinated a lot with the owner, and she really liked the process,” Daugaard said. “I think in the past, she wanted to be an architect. She’s good at communicating her thoughts and we implemented them in the design.”

Because the family owns a number of high-energy border collies, the landscape architects were asked to create a safe spot for the dogs on the northeast side of the home. “They can let them out to play and there are high enough walls so they can’t escape,” Scherer said. 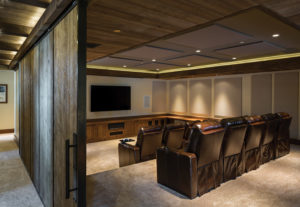 That area can be opened up completely on two sides to create a giant “play” room.

They mated steel and iron dog fencing to a vertical, natural stone wall over 6-1/2 feet tall. It’s at the most secluded portion of the house, and like the home itself, it’s built into the grade — a place where the collies can be themselves, secluded in their graded dog run, and never bother the neighbors.

“We used grass pavers underneath the sod,” said McClain. “Usually they’re used for church parking or industrial stuff, but we used them to keep the dogs from digging up the grass.”

The dog run is made for play, just like the rest of the property, which is full of outdoor spaces with essentially no edges, and sweeping views unobstructed by landscape or structure. And that’s precisely what the clients had in mind when they started.

“Nestling a large house into a hillside created a number of challenges, with large retaining walls needed — as well as creativity in figuring out how to accommodate the driveway and the ski-in, ski-out access,” Rashid said.

But they had a vision. They assembled a team. And they built a mountain home in a grand manner.