It’s a bumpy and reeling ride down the tracks on engine WAMX1501. It should be. “These rails don’t get the scheduled maintenance that the main BNSF line does. We don’t haul enough inventory to get much attention,” observed engineer Kyle Jeschke. In places, grass and weeds crowd the aging railroad ties. The locomotive, battered and rusted with age, lurches once again; Kyle’s head bobs and sways with the rhythm of the tracks. Every car has seen its years sitting in big city rail yards and have the “tagging” art to prove it. Today he’s hauling two cars of scrap iron. Tomorrow it may be forest products from Plum Creek Lumber Company. In season, there’s grain or other farm products. Seldom does his train length exceed 10 cars and his speed is never above the 25 miles per hour limit as allowed by the Federal Railway Association (FRA). Cars on Highway 2, paralleling his rails, whiz on by. It’s no Amtrak super-liner.

Compared with the behemoth BNSF, the Mission Mountain Railroad (MMR) is laughably small. So small that Jeschke believes he operates the shortest rail trackage in Montana. Total rail distance between Columbia Falls and Kalispell is 19 miles on a one-track right-of-way. His “little engine that could” is a hand-me-down switch locomotive built in 1974. “It’s got well over 1 million miles on it,” Jeschke exclaims.

Now, Mission Mountain Railroad exists as an isolated remnant of the former rail giants. The MMR is locally owned, has only eight employees and is actually a contractual subsidiary of WATCO, a nationwide conglomerate of short line railroads serving larger corporate carriers. MMR leases the trackage from BNSF. Almost all of the big national rail carriers contract with smaller ones. If it weren’t for MMR’s parent company, WATCO, gobbling up abandoned short lines, there would no more feeder lines from the past. Of the 23 short lines they own nationwide, there are only two in Montana. MMR also operates a rail line between Stryker and Eureka, carrying forest products. The only other WATCO line, the Yellowstone Valley Line in Fairview, Mont., bests it in shortness. It is one mile long, but is not actively operated year round. By all measures, the MMR route between Columbia Falls and Kalispell is likely the shortest continually active railroad in the state.

Time was when Jeschke’s route was the chief link between the two towns and both freight and rail passengers were de rigueur. Today’s right-of-way follows the same alignment that the original route did in 1891. It was the romantic era when passenger train travel was fashionable. That all ended when the main line, then dominated by the former Great Northern Railway, elected to abandon passenger service to Kalispell and focused on its Empire Builder transcontinental traffic through Whitefish. It’s an old theme in Montana: The big rail lines withdrew from all of their subsidiary feeder lines. Abandoned rail beds are strung across Montana like spaghetti.

Along with abandoned railbeds are long-forgotten rail towns. Any historical map of Montana reveals the sheer density of towns that sprang up adjacent to rail lines. Names like Dunkirk, Lothair, Nyack, Red Eagle and hundreds of others seemed to cling to the rail right-of-way like barnacles to a hull. Montana’s historical landscape was once saturated with these small locales. In reality, they were little more than coaling stops or water stops located at measured distances apart so that steam-powered locomotives could obtain the fuel and water necessary to move passengers and freight. Wooden grain elevators also hugged the rails and sprouted up with the prairie communities along the Great Northern’s Hi-Line. And out from those points extended the short tendrils of the smaller feeder lines aimed at drawing natural and human resources back to the mother line.

In the memorable glory days of Montana railroading, two major lines dominated transcontinental traffic: The Northern Pacific, on a southern route, and the Great Northern on a northern route. The mighty Great Northern, owned by James J. Hill, once boasted of 60-hour passenger runs between St. Paul and Seattle. Its ‘Oriental Limited’ passenger service was the envy of the nation. With Glacier Park as an attractive anchor, the Great Northern appealed to wealthy vacationers eager to stop off at Midvale (East Glacier) or Belton (West Glacier) to journey into the park. To make the visits even more attractive, James Hill and his son, Louis Hill, set about constructing magnificent log hotels and chalets to accommodate rail-bound park visitors. Their business model insisted that the biggest hotels had to be the best and they were not happy until they had both. To this end, the Hills focused on using Glacier Park as a magnet to draw vacationers to Montana. And they were plenty good at it … for a time. Through the heyday pre-war years the railroad and Park liaison flourished, attracting thousands of well-heeled tourists from the East eager to “See America First,” one of the Great Northern’s slogans, instead of shipping off to Europe for their vacations.

Although the Depression and war years diminished the public’s interest in rail passenger vacations and Americans turned to more widespread private car tourism, the Great Northern persisted. Post-war years saw a resurgence in travel and the railroad cashed in with its venerable Empire Builder passenger service featuring, for the first time, dome cars.

Today, railroad lore is inextricably linked to Montana’s historic consciousness. Entire generations of Montanans come from “rail” families. Or “rail” towns. Some of the older generation still recall the shrill sound of a locomotive steam whistle as it pierced the frigid Montana landscape. For now, though, there’s Amtrak for passenger service which is compelled to take a second seat on rail sidings to the giant Burlington Northern with expansive 150-car strings of coal, oil or other freight whizzing on by. Days gone by saw uniformed conductors working the aisles on sleek passenger trains, checking their pocket watches, keeping to a tight schedule. Now, with Amtrak sidelined and woefully behind schedule, the glory days of train travel seem to have passed us by. So have the rail towns. So have the tiny feeder lines. Except, if you know where to look, and understand the then-and-now rhythms of our past, there are still a few remnants left like Mission Mountain Railroad, sustaining tradition and oozing nostalgia with each lurch of the locomotive and swing of a switch. Maybe that’s why when you see WAMX1501 chugging alongside Highway 2 between Columbia Falls and Kalispell it’s worth a nod to history to honk your horn at Kyle and his crew members. Chances are they’ll sound their horn in acknowledgment.

There was a time when the railbed that today’s Mission Mountain Railroad operates extended all the way from Columbia Falls to Somers, passing straight through Kalispell on its way to the Somers Lumber Company at Flathead Lake. In the 1920s and 1930s it was the largest lumber mill in northwest Montana, milling and treating ties and bridge timbers for the Great Northern. Out beyond Somers, floating on the still waters of Somers Bay lay gigantic “rafts” of cabled up logs awaiting the mill. Rail giants like the Great Northern relied on such mills, and the short lines to them, to fill the rapacious needs of their growing rail system. By the thousands, treated railroad ties left Somers for the far-flung reaches of the GN’s empire that stretched across eight states. By 1910 it was producing more than 30 million board feet of lumber for the Great Northern. When the railroad abandoned the short line, the mill shut down and the company town of Somers withered away. Now the railbed is a bicycle path. It’s been many decades since folks in Somers have heard that lonesome whistle blow.

Up ahead, the twin steel rails appear to warp and rise and dip like they were shaped by an earthquake. Unperturbed, Jeschke aims WAMX1501 down the line with ease. In the eight years he’s been with MMR, he has been general manager, engineer, track repair laborer, brakeman and office manager.

His brakeman, or woman in this case, a position required by National Transportation Safety Board standards, is Malena Sweet, eight months into the job. She constantly dismounts from the engine, walks the line of cars, couples or uncouples singles or multiples, throws switches and relays her actions to Jeschke by radio, the mic hanging from the front of her safety shirt. She’s slender and nimble with an eager attitude and a bright smile. “Always wanted to do this. Just this,” Malena quips.

Up in the engineer’s cab, over the ear-numbing hum of the diesel, Jeschke shouts into his radio acknowledging Malena’s directions. “We use lots of lingo,” he explains. By FRA rules, the two relay information on “direction, track, protection and distance.” Over and over. Each time she dismounts and is “on ground,” they communicate constantly for safety as required by their profession. They team up in a well-rehearsed choreography — the symphony of heavy industry.

The locomotive pitches and weaves its way past a weathered rail sign, “Evergreen,” and then, closer to Columbia Falls, one that reads “Lasalle.” Both are names of former stops on the passenger line. “They don’t have any functional meaning anymore,” says Jeschke. From an operational standpoint the only places along the 19 miles of line are sites where they may have to “break” a standing line of cars that block road crossings. But most of their strings are never long enough to interfere with vehicle crossings.

Malena climbs back into the cabin surround, Jeschke releases the brakes, nudges the throttle forward and engine WAMX1501’s diesel spins up RPMs as if to say: “I think I can. I think I can.” 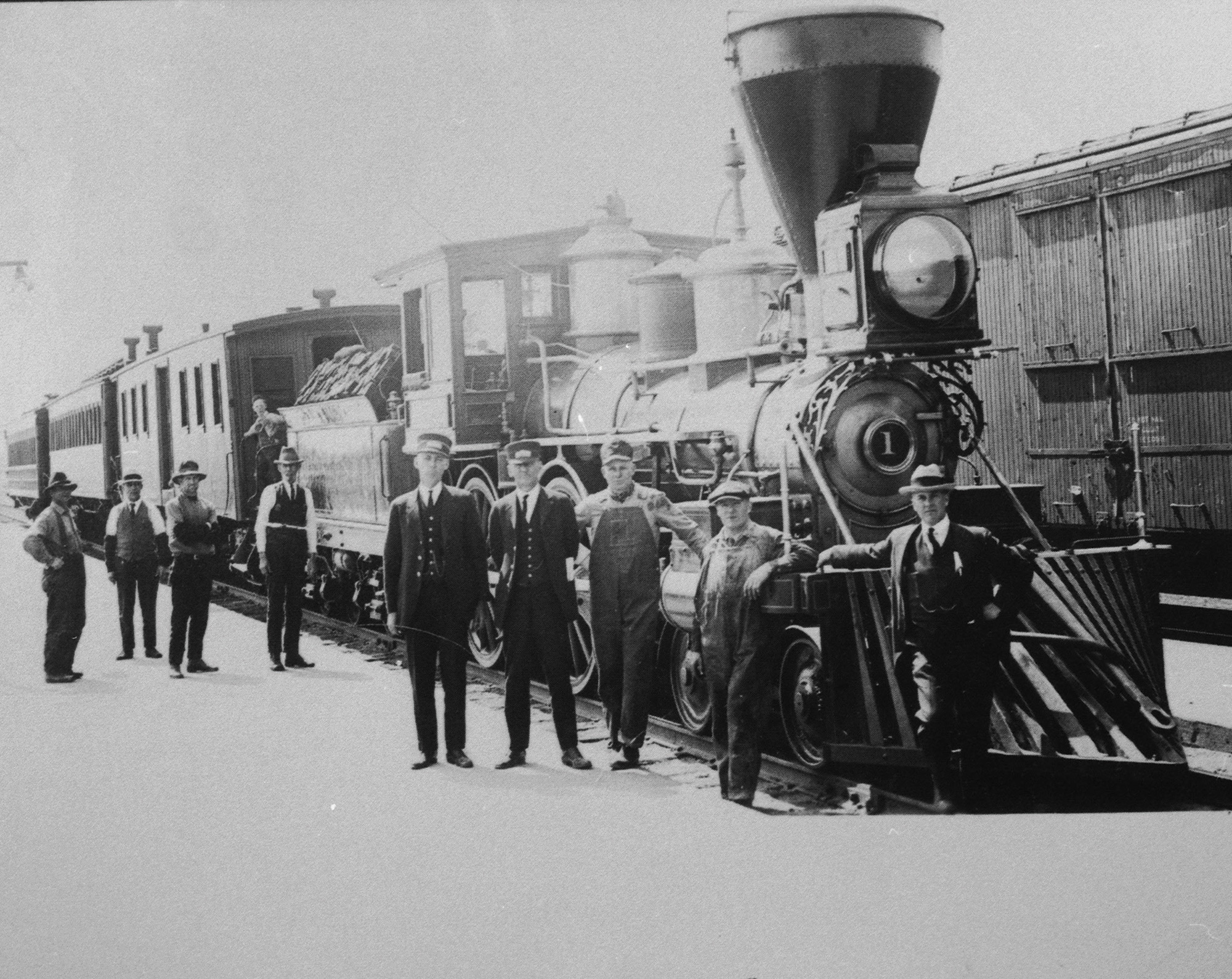 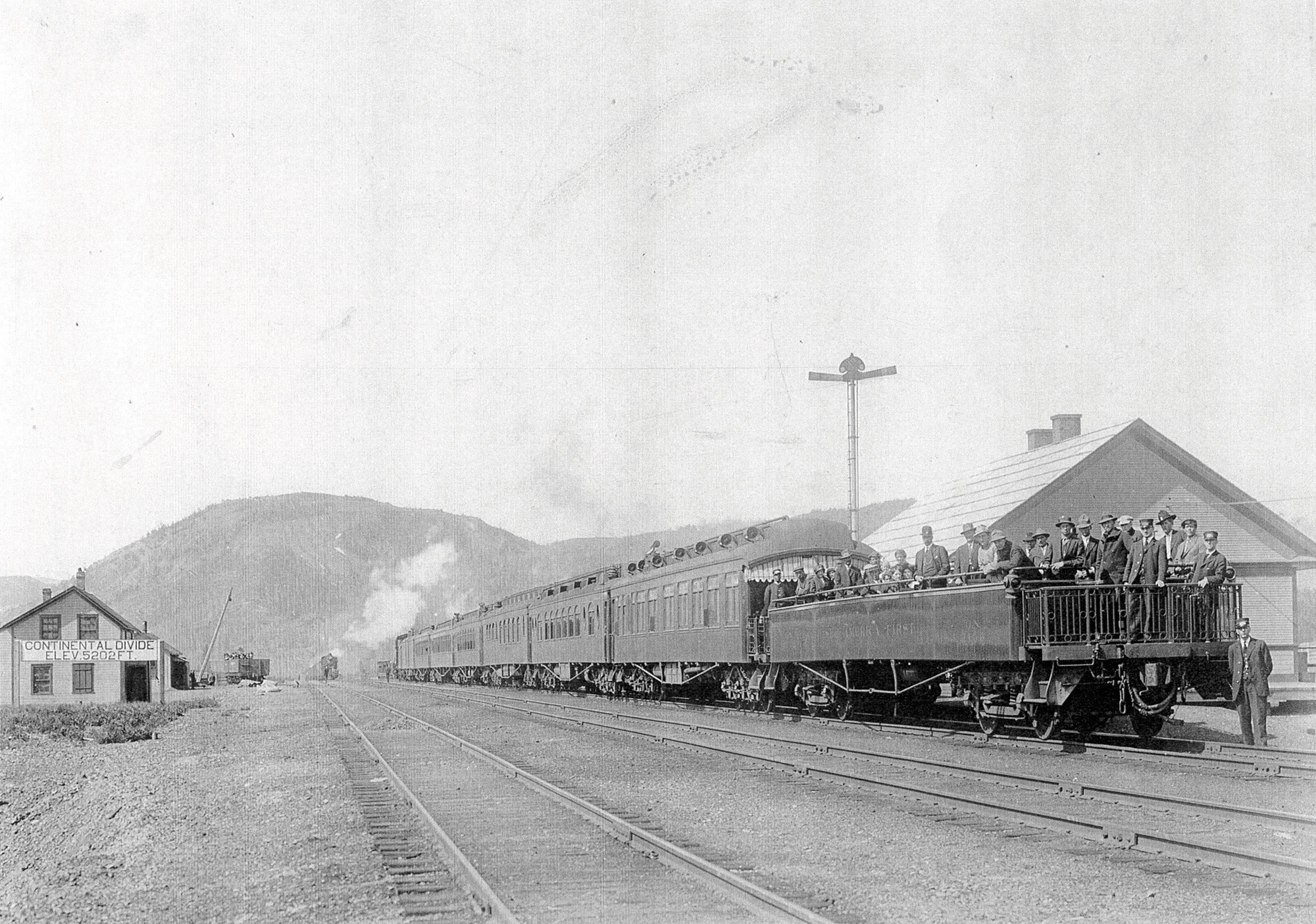 An open air observation car at Marias Pass, circa 1913. | courtesy of the Stumptown Historical Society 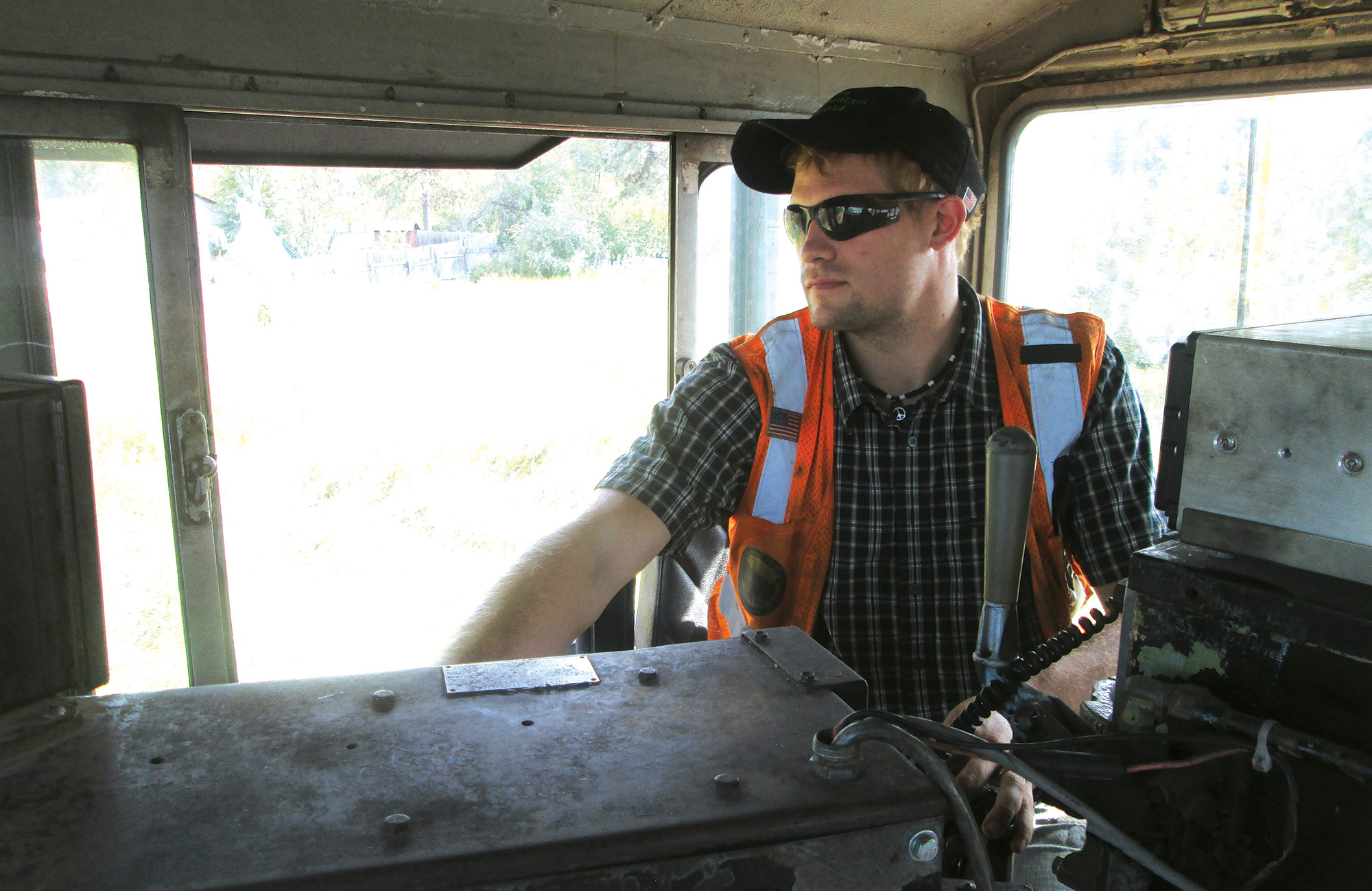 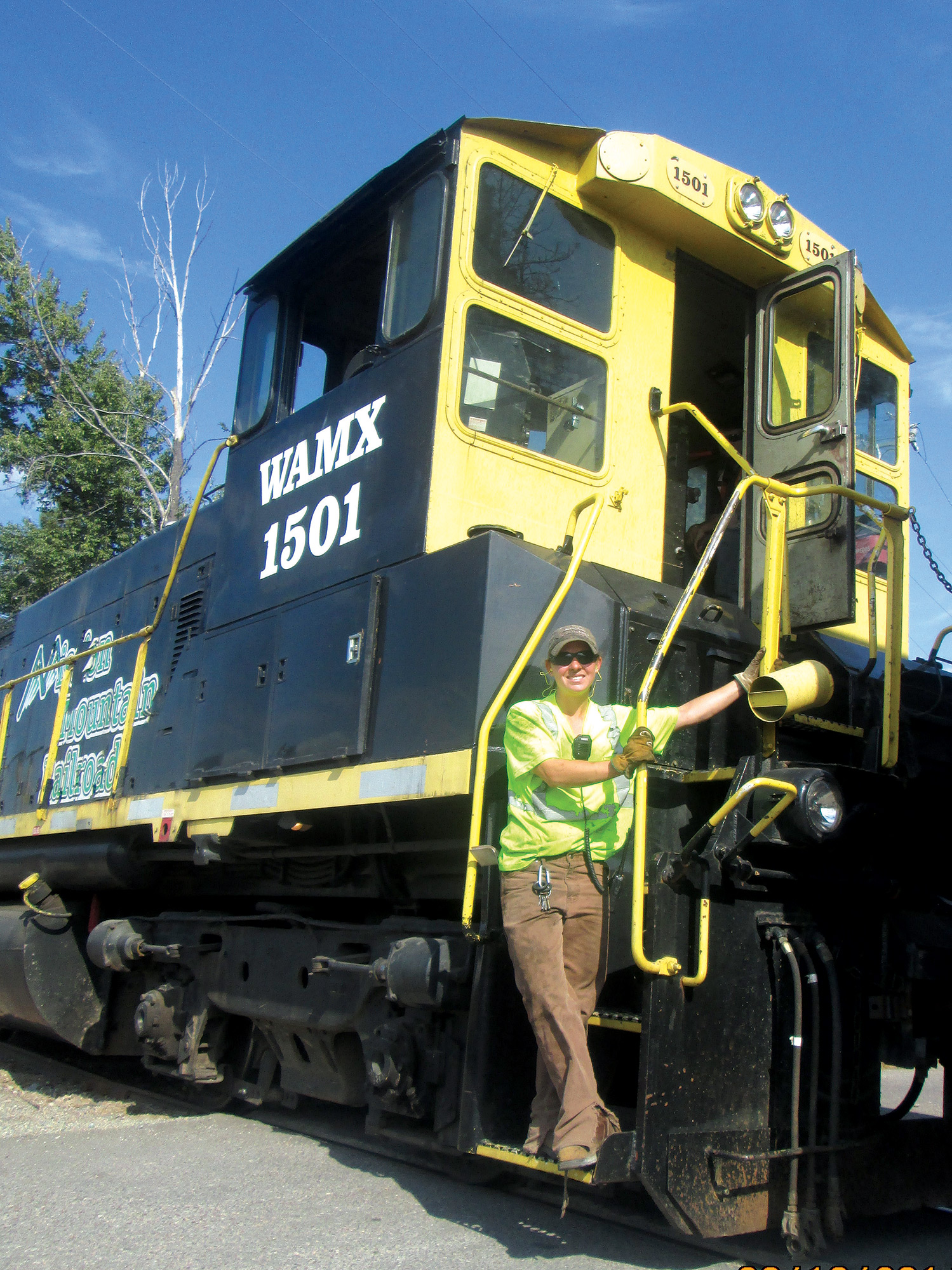