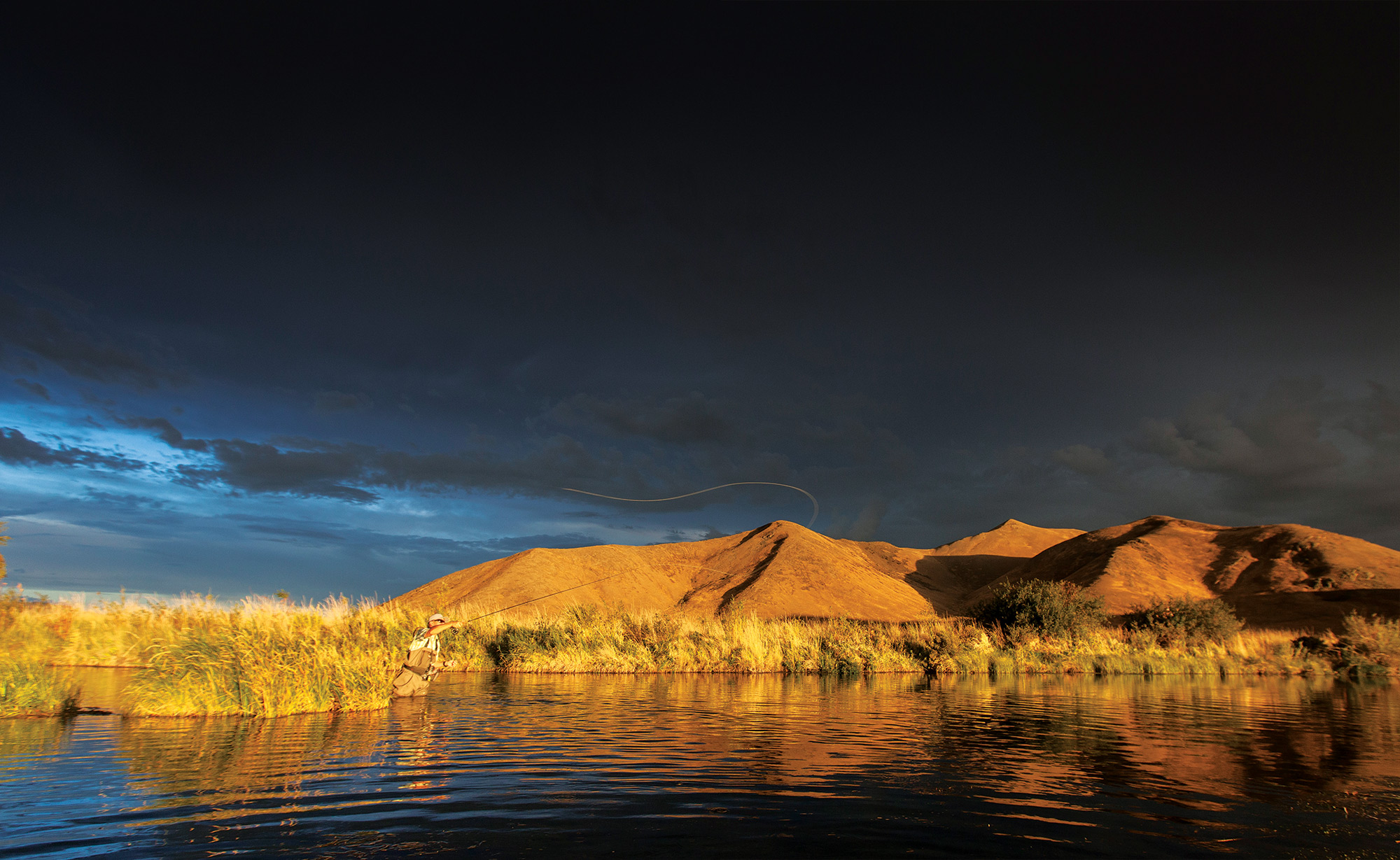 MY WIFE, DIANA, TELLS ME THAT I have no regard for lightning. She may have a point.

The first time I took her fly fishing we had no more than waded into a local stream when thunderheads began billowing on the southwestern horizon. As so often happens, the trout started to rise. Clouds of dusky caddis flitted above the water like miniature marionettes dancing on a puppeteer’s strings.

Those of us who are die-hard fly casters know that this can be a mesmerizing time. In fact, time stands still. We become consumed by the drama of emerging adult insects, fish rising in numbers and in pools where moments earlier there were none, and immersed in the rhythm of casting: feeding out line, adjusting the loop’s trajectory to lay down the perfect cast. Finally, the caddis or mayfly imitation we so carefully tied last winter alights just 3 feet upstream from the very spot where that big fish just sipped his last snack. Set the hook, net and release, then repeat the seduction once again.

“Bruce, that looks bad.” Rather than assessing my technique, Diana was pointing toward a furious looking sky. She wasn’t watching the bugs or the eddying current or the drift of her fly. She was holding the coils of her lime-green colored 5-weight line against the rod’s cork handle. Our minds were in totally different places: mine preoccupied 20 feet in front of me; Diana’s anxiously fixed on the horizon. Just two rod-lengths from each other, we were poles apart.

Despite the approaching storm, the wind had not yet come up to chase the swarming buffet away. The hatch and the feeding frenzy intensified.

I turned to my right where she’d been casting, and found her edging toward the shore. I quickly retrieved my line and secured the elk hair caddis in the hook keeper. I would guide her into position, toward an ideal angle that would minimize leader drag. From there, odds were good she’d draw a strike from that seam in the current now peppered with rises, and then land her first wild trout on a fly rod. This was the perfect moment. I could hardly wait to see the look on her face.

It was still early in our married life. Among the things I had yet to learn is that Diana has no use for testing her resistance to electrical current. Still, she’s a cool customer, so when she tried redirecting my attention to the horizon, any hint of alarm in her voice just didn’t register. Next time it did: “I think this is crazy standing here in the stream waving sticks.”

I came to my senses. Water is a good electrical conductor. Brandishing graphite lightning rods while immersed thigh-deep in it shows little regard for self-preservation. An image flashed before my eyes of a horse that I used to ride. He’d been struck dead at the edge of a pond — his face scorched and electrified. No opportunity for him to learn from that experience. Taking a drink when lighting carves the sky is very bad timing.

We left the stream as the first raindrops (more like small puddles) began pelting us. That first trout would have to wait. We’d fish another day.