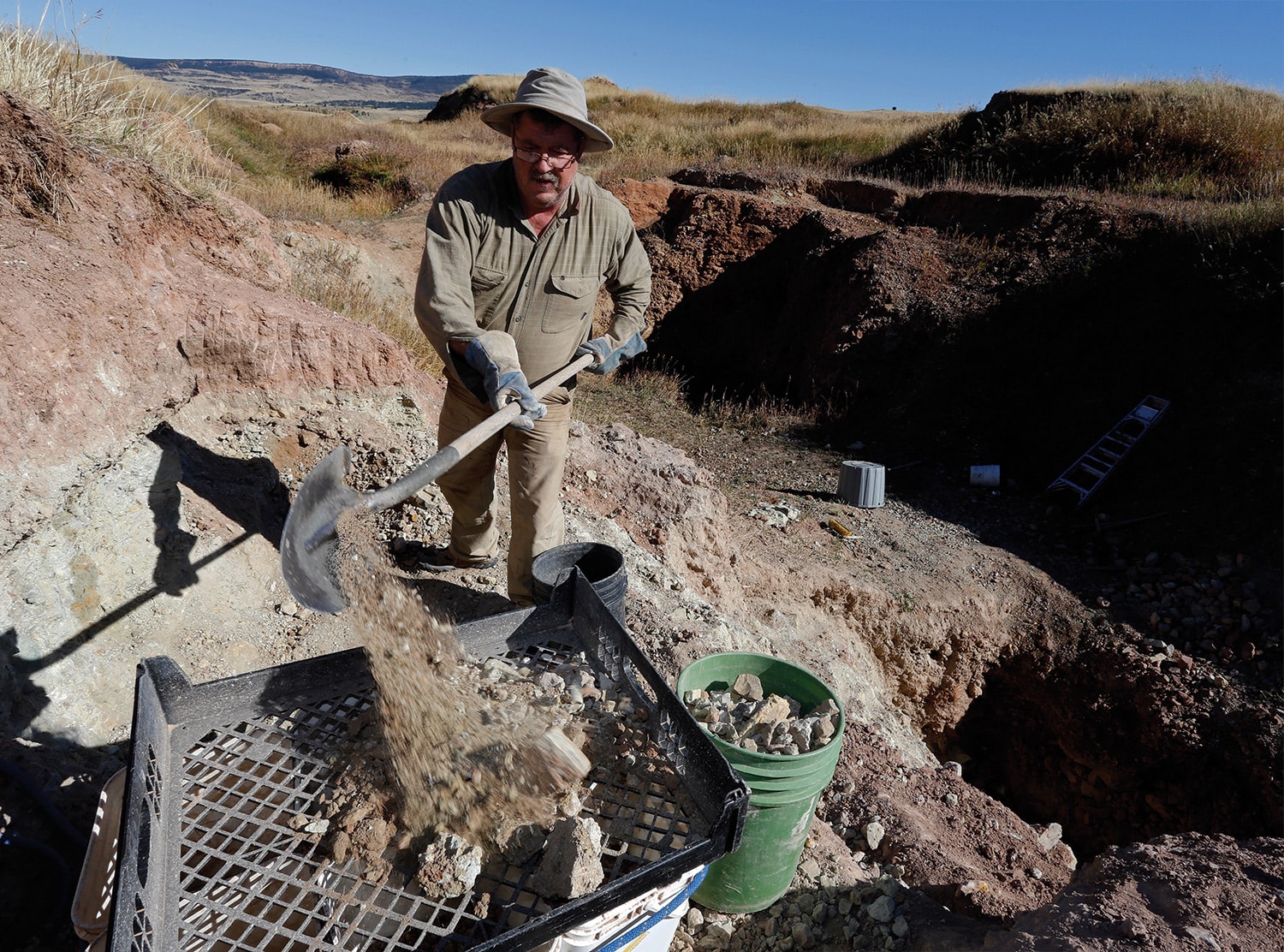 Jim Hurley has mined and lived full time in Sapphire Village for more than a decade. “These are hand-prospector tools,” he says of his equipment, “the kind of stuff that hasn’t changed since the days of the pharaohs.”

A SUMMER EVENING IN THE FOOTHILLS of Montana’s Little Belt Mountains, I sit outside to watch the sun sink. A breeze rustles the grass. Birds zip through the air, enjoying a few final flights before bedtime. One, a swallow with striking blue feathers, catches my eye. He inspires the admiration and longing that beautiful things do — especially beautiful blue things.

As colors go, blue is perhaps the ripest one, bursting with symbolism and associations. It makes us think of sky, of what some might call heaven. And it makes us think of sea, of all bodies of water, really. Maybe its watery quality is what connects it to emotions, to tears: It’s the only color on the spectrum used to describe musical notes and songs and downcast hearts. It’s always been the color of the Virgin Mary’s cloak and of Lord Krishna’s skin. No other hue is so ethereal and moody all at once, so supernatural and down to earth. The bird vanishes, and a man’s voice floats from a nearby building, stark against the otherwise quiet landscape. 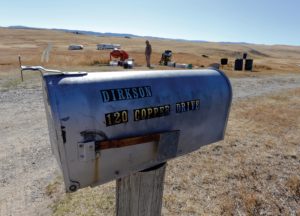 “O-65, O-65,” he intones. “I-23, I-23,” he says, and waits for a moment. “B-11, B-11.” He pauses. Every few minutes one of those pauses is crowded with the cries of others: Somebody calls out “Bingo!” and a dozen voices erupt in response. These are the sounds of people trying their luck — an urge expressed in more than one way here in Sapphire Village.

Jim Hurley is the man calling out the bingo numbers, as he does every Wednesday at the Blue Nugget Bar. He’s covered in a film of dirt. He spent this day like he has so many others: outside, chipping away at the rocky terrain with a pickaxe on the parcel of land where, beginning in the late 19th century, a series of mining operations unearthed Yogo sapphires. All commercial mining has ceased for now, but individual miners (also known as “hobby miners”) like Hurley spend hours gathering ore, limestone, and slate by the bucketful. “When it’s real hot,” he says, “it’s quite the proving ground.” Sometimes his efforts lead him to uncover, among the lesser rocks, a flash of blue.

Yogo sapphires come in several shades of blue, from icy to purplish, but cornflower is the most desirable, the hue for which they’re known and loved. Unlike other Montana sapphires, which come in a variety of colors, Yogos are always only blue. They’re named for Yogo Gulch, the sole place on Earth where they’re found. But it isn’t only their color and confinement to this single slice of the world that make Yogos special. True natural beauties, they need no help to look as good as they do. 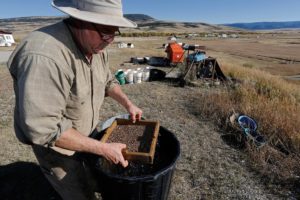 Jim Hurley prepares to pluck a few unearthed Yogos from a wash pan. The mining process is both primitive and intricate; it begins with a pickaxe and ends, if all goes as hoped, with tweezers.

“Yogos don’t require heat treatment like other sapphires,” explains Derek Brown, another hobby miner. “They’re clear, free from inclusions when they come out of the ground. They don’t change color between natural or artificial light. They’re just a very high-quality gem.”

To some, Yogos are more precious than diamonds, and their cost reflects it. “A round, brilliant-cut, triple-A, one-carat Yogo sapphire,” Brown estimates, “would be about $14,000.” That’s more than three times as much as the average one-carat diamond ring.

Brown, though, is not driven by money to mine. “For me personally, it’s more about being part of history.” A Great Falls native, Brown now lives with his family near Seattle, but comes to Sapphire Village for a week each summer. “This is how I spend my vacation,” he says. And when he finds sapphires, he explains, “I have them cut and they go into a safety deposit box. I figure my kids can fight over them one day. I’ve never sold one.”

Brown can dig here because his in-laws were among the small number of people — about 50 families — who secured digging rights by buying lots sold by Roncor, one of several companies that once owned the commercial mine. At his in-laws’ house, he shows me the handmade, mechanical wash kit he uses to process the buckets of earthen material he’s brought from the mine. It separates the finer rocks from the heavier ones and eventually reveals the sparkling blue sapphires, if there are any. On this day, the Yogos are tiny chips measuring just a few millimeters. They’re breathtaking in spite of their size, bits of crystallized aluminum oxide maybe millions of years old, clear as glass.

“It’s exciting to get to the bottom of that pan and see something shining,” he says. “Almost like fly fishing — you see that fish come up, you get a thrill, it’s great. But it’s a lot of work, too. On the days when you don’t find anything it’s kind of a downer. It’s definitely a labor of love.” 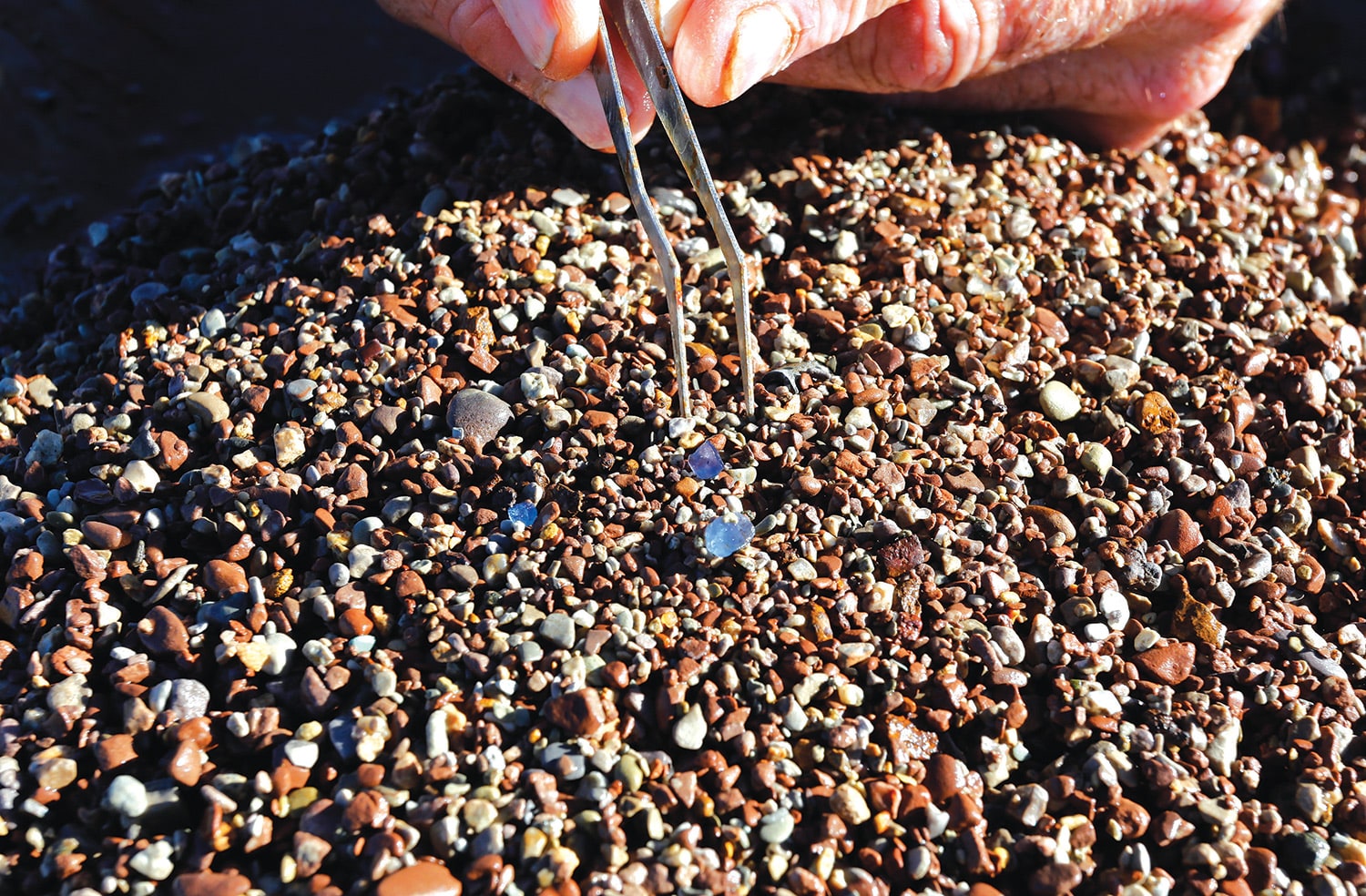 “It’s kind of a hand-to-mouth existence,” admits Hurley, who calls bingo at the local bar but doesn’t play it — perhaps saving his strokes of luck for his primary pursuit. A full-time resident of Sapphire Village, he sells the sapphires he unearths, though he doesn’t make a living at it. He learned about the Yogos during a blue time in his life. “I was reading a book about them when my mother was sick with cancer. I read up about mining techniques and history. I wanted to get into things that I could do out in nature, relatively low impact. Then I found out about this place.”

A Livingston, Montana, native, he’s called the village home for more than 10 years. It’s a quiet existence in winter, when the autumn hunters and summertime campers are gone and the ground is too cold to dig. “Most of the people who have digging rights, they don’t live here in the winter. There’s about 70 people between Utica [the nearest town] and the village who are more or less year-rounders. More registered cattle,” Hurley notes, “than registered voters.”

Initially, he didn’t plan to be going it alone. “There was a woman involved that was supposed to be part of this whole thing. It was something we wanted to do together.” Now his main companion is Spot, also known as Spotty. “I have a dog that’s so much company, he’s almost two dogs. He has that much personality.” Spotty zooms ahead of Hurley’s pickup as we make our way toward the mine. 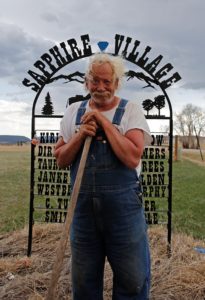 Louie Walker is a part-time resident of the village and one of the unique personalities that lend the place its color and character.

We pass through a gate to which only those with digging rights have a key, and drive over an undulant landscape speckled with lone figures, each one working on a chunk of territory he’s laid claim to for the season. “Miners are individualists,” says Hurley, whose college degree is in Western history and anthropology. “It’s an associative group, but it’s not a tribe. This is no team effort. Everybody’s here for all kinds of wild reasons.”

Hurley is here for the Yogos themselves and, he says, for the sense of “Eureka! There’s a thrill to it. I work for seven or eight days before I process out the material I’ve collected, so there’s an element of delayed gratification.”

And when he strikes blue? “There’s that awe factor, finding a biggish- type stone that’s really nice. You go, ‘This is it. This is flawless, its color is beautiful. This. Is. It.’ But it’s rare that it happens. I’ve only found two really good stones this year, and I’ve gone through tons of material.”

We park the truck and step down into the pit Hurley’s been mining every day since the ground thawed. “Today,” he explains, “I’m going to do a little bit of pick work on the face of this deposit, get it all down in the bottom, scoop it up into these buckets I brought, and start condensing that down for extraction.”

The meditative peace of seeking and the joy of finding are the occasional rewards of this painstaking process. It’s an appealingly pure and admirably old-fashioned one, both primitive and intricate, that begins with a pickaxe and ends, ideally, with tweezers plucking a cornflower gem from a wash pan. No machinery is allowed on the mine grounds. 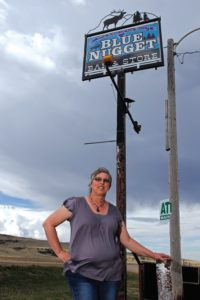 Kelly Bentley and her husband run the area’s unofficial community center, the Blue Nugget Bar. Though the mine is only open to those with digging rights, Bentley says, “We get people from all over who come up here with the hope of mining.”

“This takes an inordinate amount of time,” says Hurley. “It’s amazing to see how much work can really be done by hand by a motivated person. It ain’t easy. These are hand-prospector tools, the kind of stuff that hasn’t changed since the days of the pharaohs.”

Not everybody sees the charm. “This is the West,” Hurley says, adopting a critical outsider’s perspective. “In the West, we are addicted to large pieces of machinery. The bigger the better. And anybody that does anything by hand, except go hunting, just can’t be all right.” This might be why some in the region — those who don’t see the poetry in digging — refer to Sapphire Village miners as “the village idiots.”

“There are lot of unique personalities up here,” says Kelly Bentley, who owns the Blue Nugget Bar. “The whole thing is just unique. A lot of people don’t understand it.” She and her husband don’t have digging rights, but their hands are full running the area’s unofficial community center, offering coffee every morning, beer every afternoon, Wednesday bingo, and Friday fish fries. “I have a nice ring,” Bentley says, flashing a Yogo. “It’s dirty. It goes through fish batter, it goes through grease.” She also sells a selection of Yogo jewelry, made by locals, from a display behind the bar. “The jewelry goes in spurts. Sales will pick up when the elk hunters arrive. People want to take something home for their wives.”

Spotty rides in the pickup with Hurley and me as we leave the mine. “I’m at my best when I’m out in the hills,” Hurley says, “in a place on the far end of the map.” We talk about the West and what it means to him. “If you’re going to be here,” he says, “you’ve got to really be here, not just a dilettante, playing cowboy, playing at the history. The West is a fluid thing and it needs to be lived and breathed to have life.” I mention the for-sale sign I noticed in front of his house that morning and ask if he plans to leave. “No,” he says, “that’s just something I have to do to satisfy my ex, because I put her on the deed.”

“The things you do for love,” he adds, getting out of the truck to close and lock the gate. Spotty squeezes his body through the half-rolled-down driver’s side window and leaps out in ardent pursuit of Hurley. Back at the mine, a few men linger under the hot sun, using ancient means to coax treasures from the earth — blues of a sort that bring joy, and last forever.