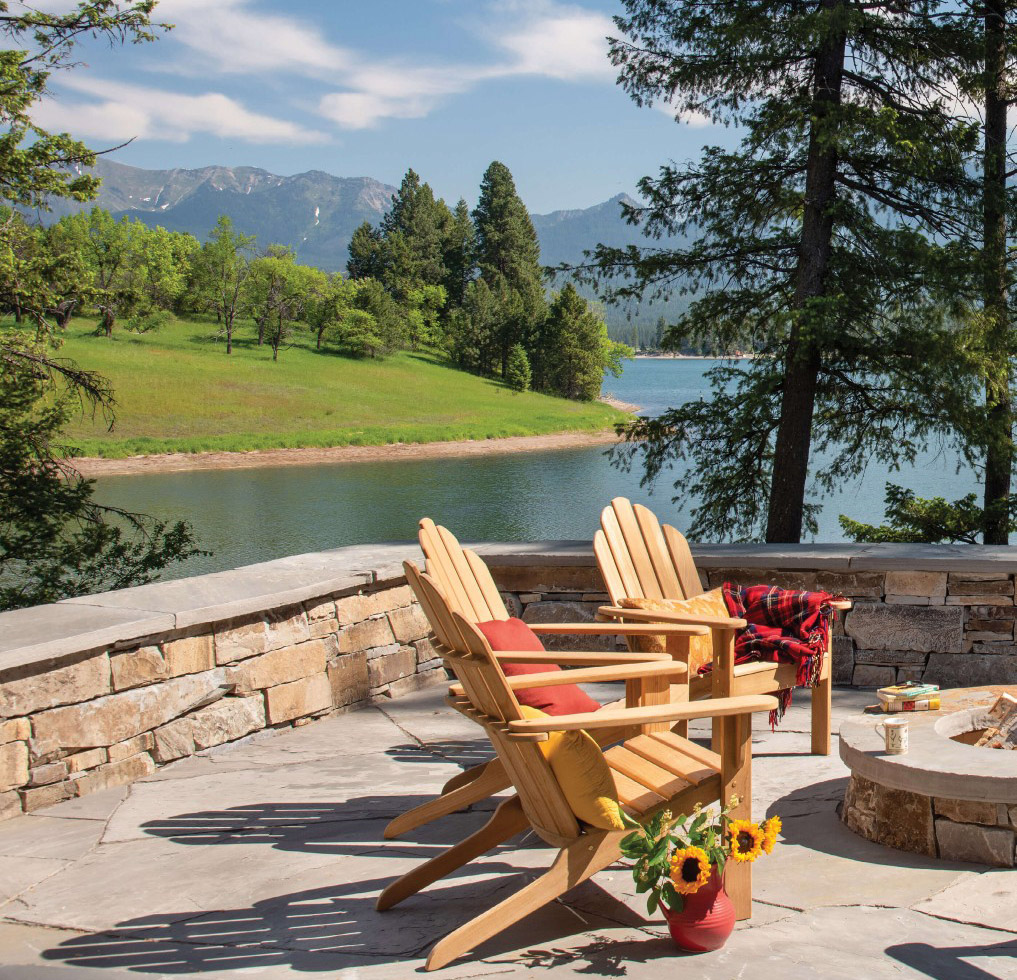 the home connect to its setting and provide relaxing areas for the owners to enjoy the waterfront views.

On some mornings, after Guinevere Cummings finishes her cup of coffee, she’ll turn to her husband, Kevin, and say she’d like to go waterskiing. “And off we go,” Kevin says. “And the water is like glass.” Zipping around Echo Lake in Montana’s Flathead Valley, the couple enjoys the serene setting in those early morning hours. Then they’ll dock their boat, walk up the trail to their house, and make breakfast. “It’s such a relaxing, easy, and fun environment,” Kevin adds. 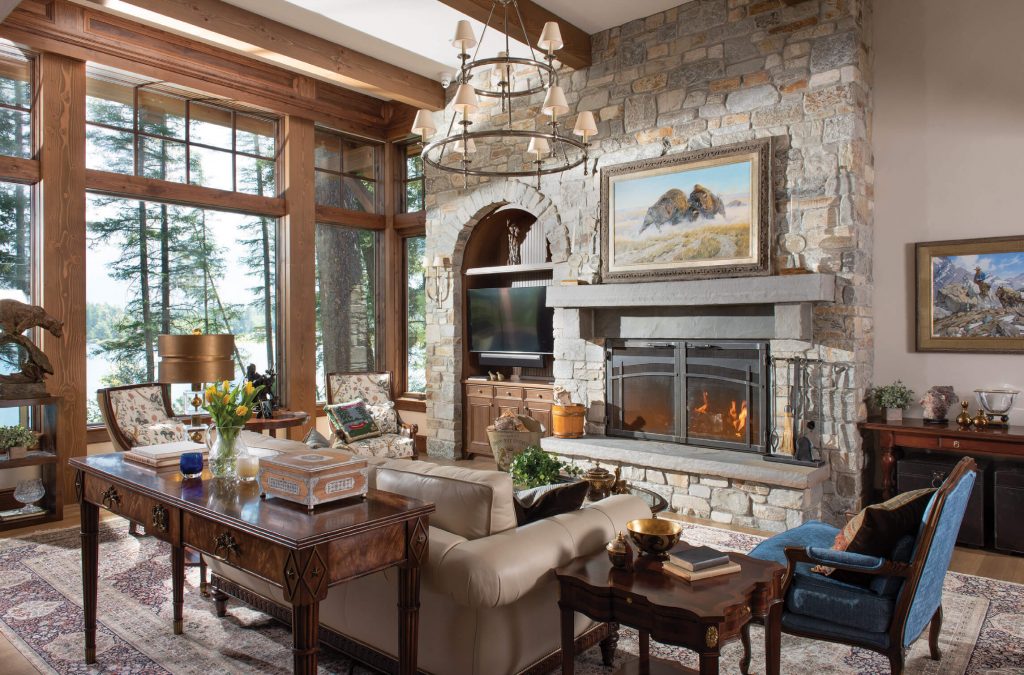 The homeowners sought a structure that was classic and timeless in its architecture and styling. The stonemasonry — carried over from the exterior to the interior — allowed for continuity in the design and was executed by West Masonry and Construction, based in Kalispell, Montana.

A home to facilitate these types of memorable experiences is just what the Cummings were after when they commissioned the Bozeman, Montana-based firm Locati Architects to design a lakeside residence that embodied a sense of timelessness. “[Architect Greg Dennee] really listened to what we told him. And when he got on board, and he gave us the first sketch of a home, he nailed it. We were mesmerized by the first sketch,” Kevin says. 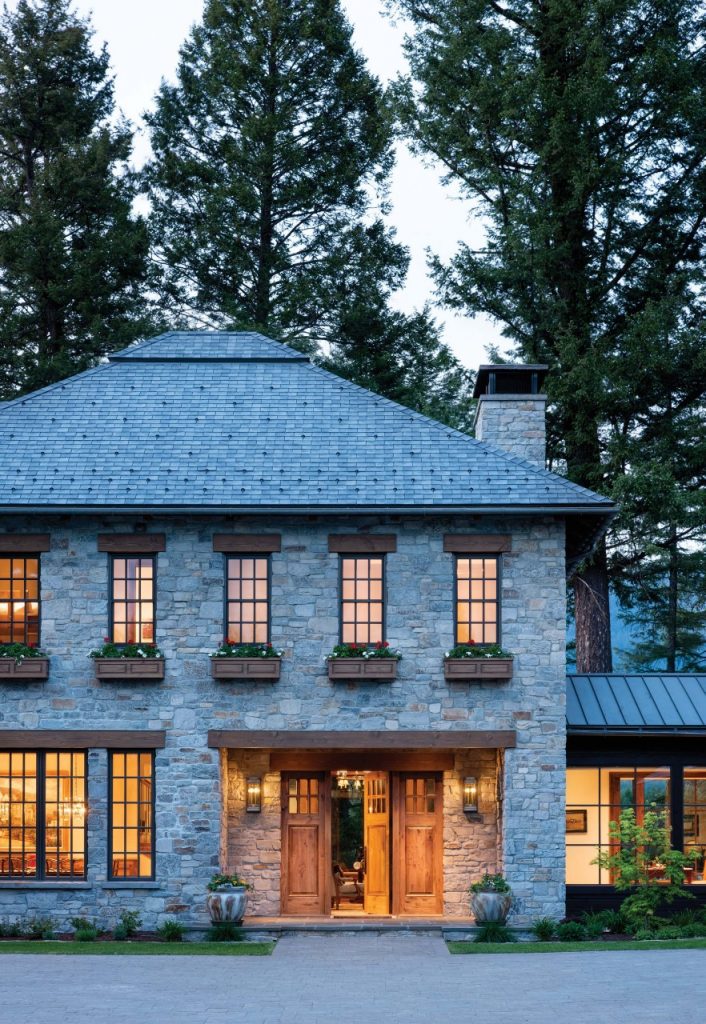 The exterior masonry was created using a historical method that’s designed to give the home an “ageless” look, and the flower boxes add an Old-World European touch.

Designed by Dennee, a senior partner at Locati, and Kevin Bute, the project manager, and built by Bigfork Builders, the 4,500-square-foot home incorporates traditional architectural details and forms, and supports a connection with its setting. Views found from nearly every room look to a small island and across Echo Lake to the Swan Mountains. And smooth transitions from indoors to the outside ensure that the natural environment is an extension of the family’s living space. 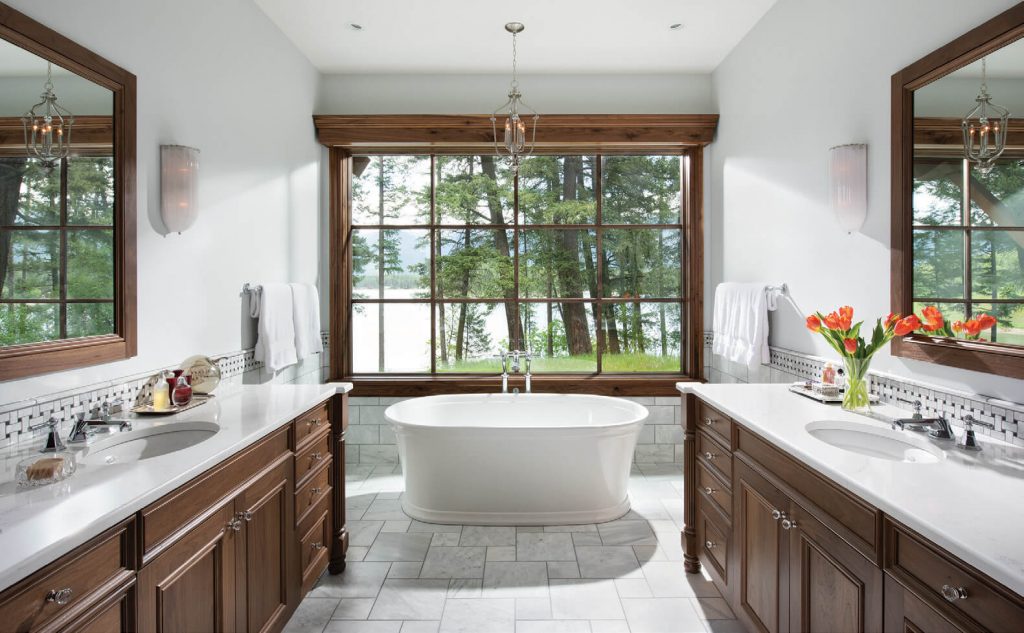 In the homeowners’ bathroom, the lake views can be enjoyed from the free-standing tub, creating a soothing environment.

“It’s like you have these beautiful paintings everywhere you look, and it’s just nature, looking out the window to these beautiful views,” Kevin says. “They never get old, and they are constantly changing.”

“Waking up every day, it’s different but gorgeous. And we just feel really lucky to live here,” Guinevere adds.

Kevin was born in Montana and attended Montana State University in Bozeman for his undergraduate degree. The couple visited the Treasure State often and, because they enjoy the outdoors and watersports, like waterskiing, paddle boarding, and boating, they knew they wanted to retire on a lake. Initially, they considered Flathead or Whitefish lakes, but their good friends in real estate who understood their lifestyle steered them toward Echo Lake “because it’s a waterskiing paradise” with warm water and mild wind. And it was a rural setting but not too remote, Kevin explains. It’s also close to Glacier National Park and downhill skiing at Whitefish Mountain Resort in the winter. 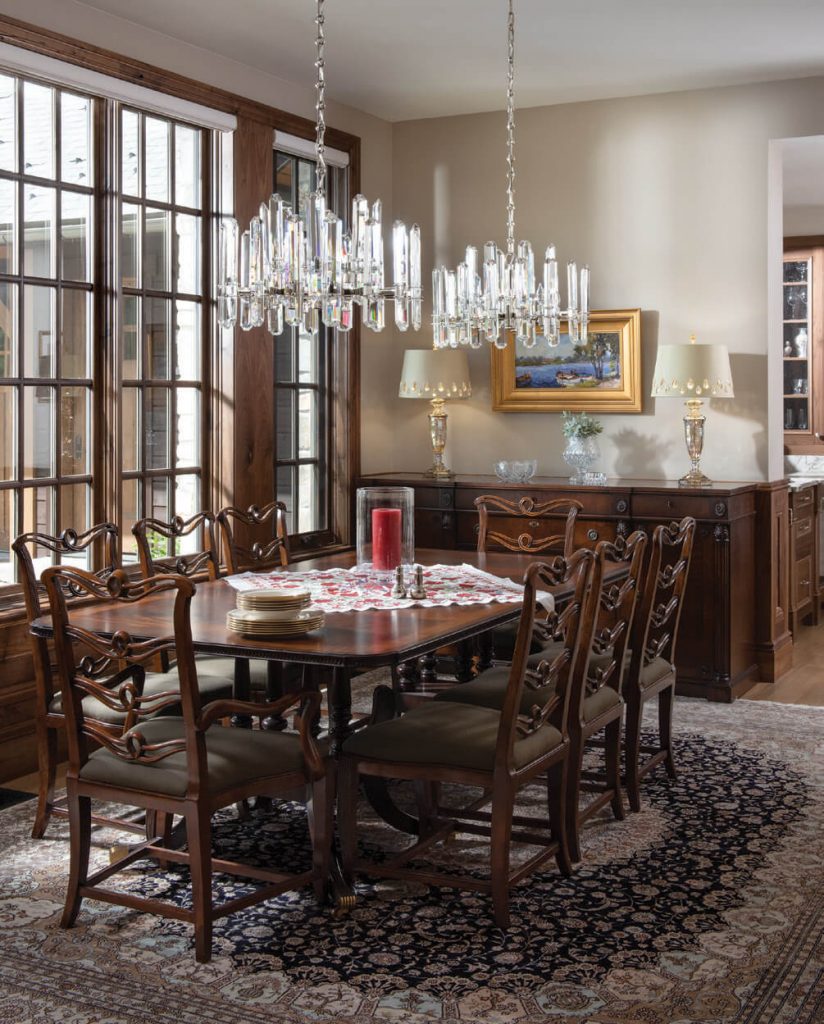 “They designed almost every room in the house with big windows overlooking the lake,” says homeowner Guinevere Cummings, with the exception of the dining room, in which Locati architect Greg Dennee sought to create a quiet gathering spot.

The Cummings rented a home in the area and started looking for real estate in the 1990s. “It was quite a journey to find this property,” Kevin says, adding that it was a two-year negotiation for the 5-acre lot that they ended up purchasing. But their patience proved worth it in the end, as the resulting home checks all the items on their wish list. 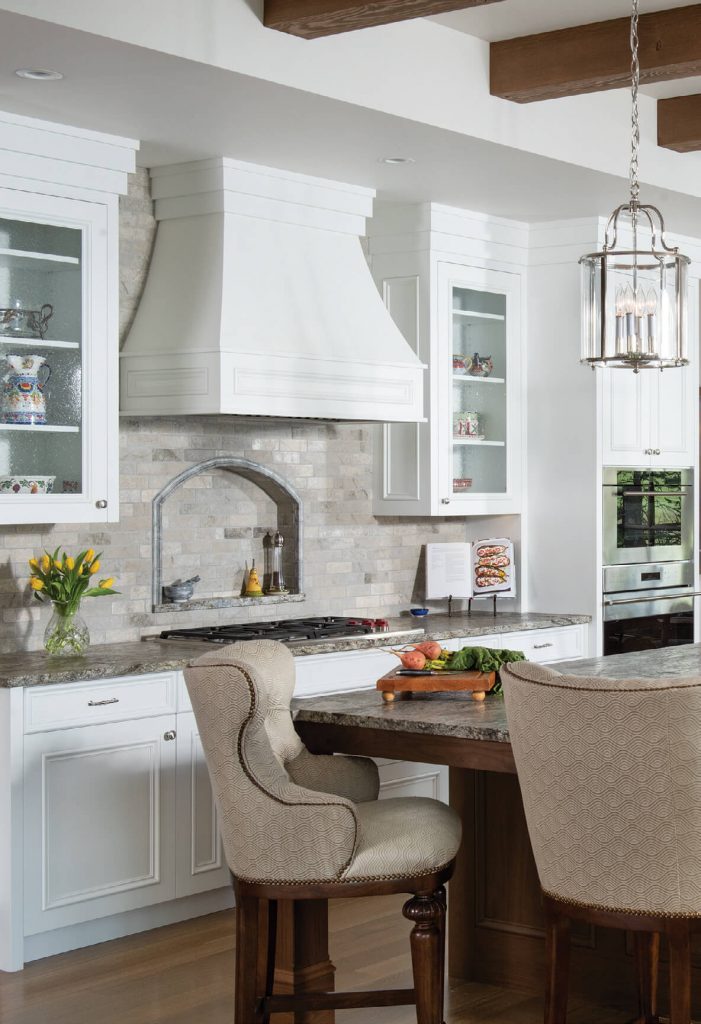 The couple wanted something that wasn’t ostentatious and would complement the lake environment they cherished. “You can’t lose the beauty of where we are; we needed to make sure the home captures the scenery here,” Kevin says. They also wanted something timeless that could have been built last year or 100 years ago. “We tried to avoid being trendy. We wanted to avoid what was the latest thing,” adds Guinevere. “All those things come and go, you know it was all avocado and sunburst yellow [in the ‘90s], so we tried to keep everything fairly traditional.” 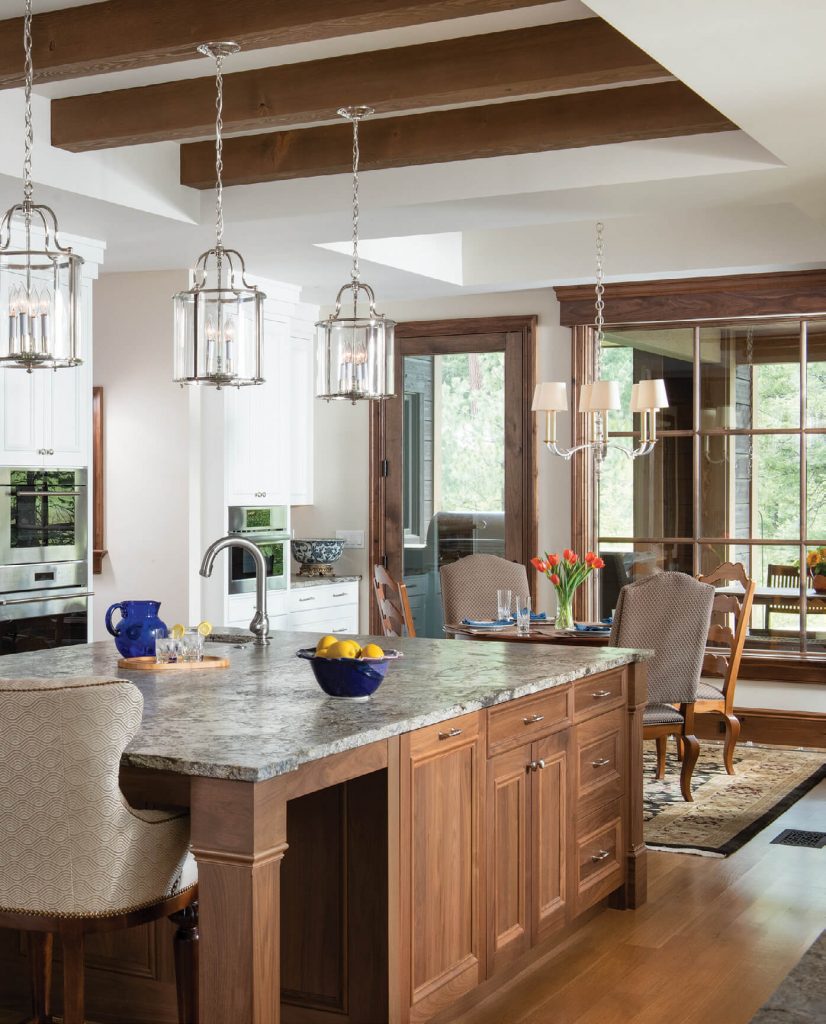 The home’s open floor plan in the kitchen and dining area is optimal for when the couple is entertaining family and friends.

The home also needed to be flexible: comfortable when it was just the two of them, but with enough space to accommodate visiting friends and family, especially their grandchildren. The design was influenced by Rocky Mountain architecture (in homage to its setting), Old World European buildings (the Cummings lived in Europe for four years, spending time in Switzerland and Austria), and Parkitecture (a nod to the structures found in nearby Glacier National Park). The result is a “European chalet-style home with a big Mountain West feel,” Kevin says. 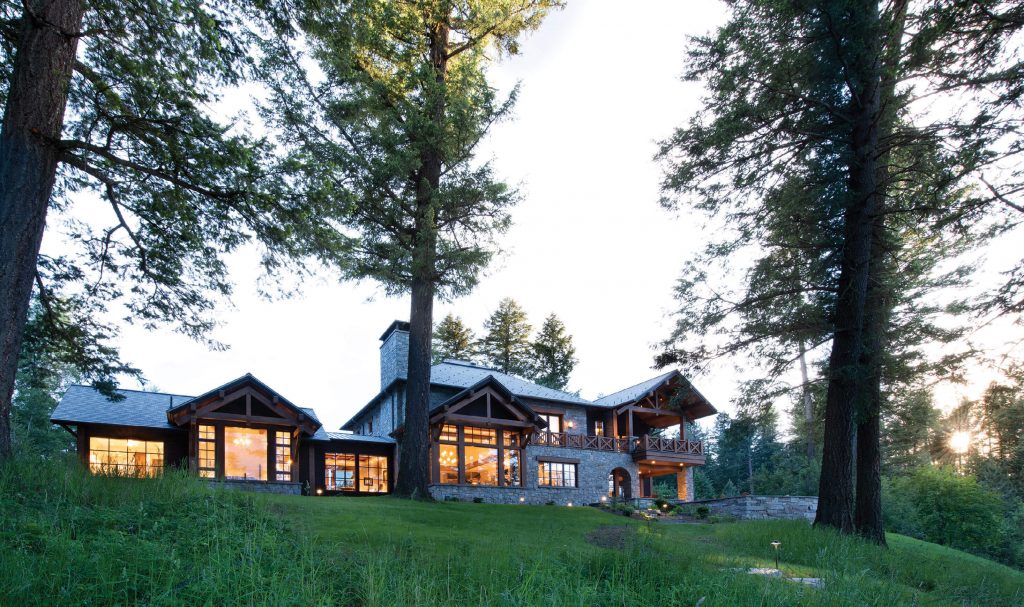 Locati Architects sited the home to be as low on the hillside as possible. “At the core of every lake-living project is how you access the water,” says Dennee, adding that he worked closely with landscape designer Jim Doepker to incorporate exterior living areas and ensure that the transitions from outdoors to indoors were seamless. A trail leads from the homeowners’ backyard to the boat dock at the lake.

Completed in November 2018, the home includes three bedroom suites and a bunk room for the visiting grandchildren. The central volume, which houses the kitchen, living room, and dining room, is built like an old stone building with a four-square hip roof. “They were looking to create something of legacy quality in the material choices. Everything is built to last,” Dennee says. “They were not creating a monument to what they’ve accomplished, more so a mechanism for their lifestyle. They didn’t want anything unnecessary. The home’s design provides the simple function of living at the lake.”

The Cummings incorporated furniture from other properties they owned, and they kept the interiors classic and comfortable. They worked with interior designer Barb Cooke, of the Whitefish-based Cooke Interiors Studio, to source light fixtures, hardware, paint colors, cabinetry, wood finishes, tile, and other final design touches. Cooke was also integral in facilitating communication and keeping the project on schedule, Guinevere says. 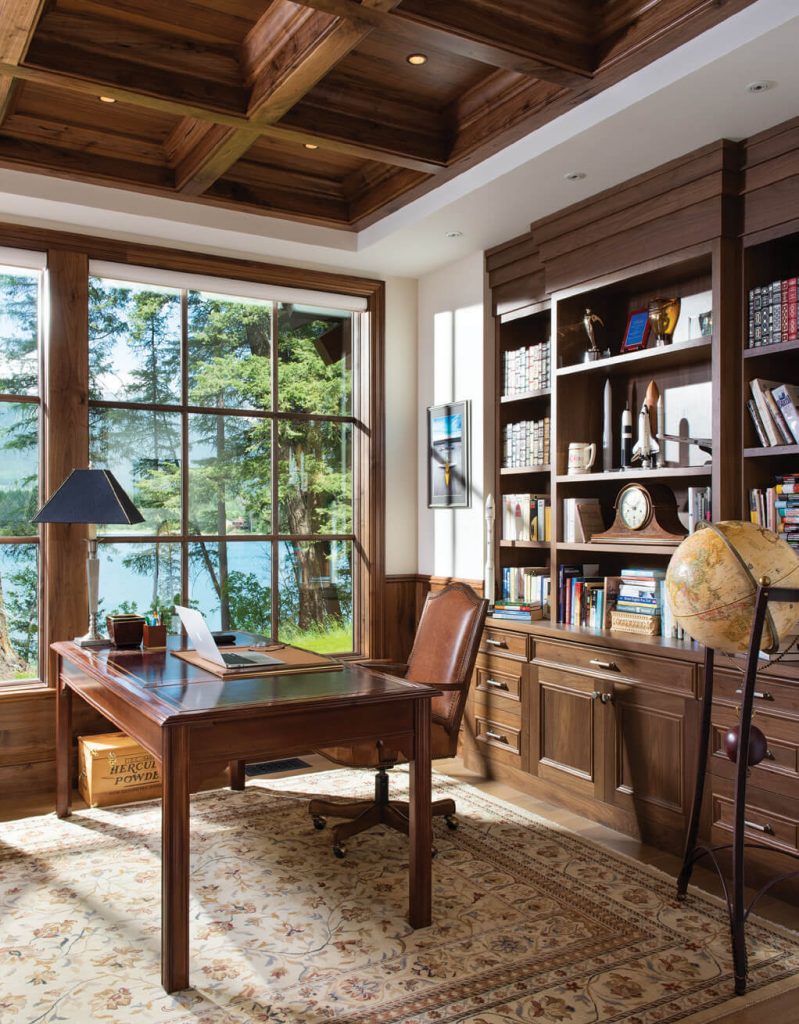 Large windows with views to the lake create a serene setting in the homeowner’s office and flood the space with natural light.

Living spaces extend outside through a series of patios, a sunken fire pit, and a large balcony located off the entertainment room in the upstairs guest suites. Dennee worked closely with landscape designer Jim Doepker, who carried the stone used throughout the home into the landscape design for a sense of continuity. And a trail from their backyard winds down to the dock for easy access to the waterfront.

“The [design-build team] just got it right,” Kevin says. “And since we’ve moved in here … we’ll be out on our dock, and people pull up and say, ‘This is our favorite home on the lake.’ Or they say hello and thank us for keeping the natural setting along the shoreline.” 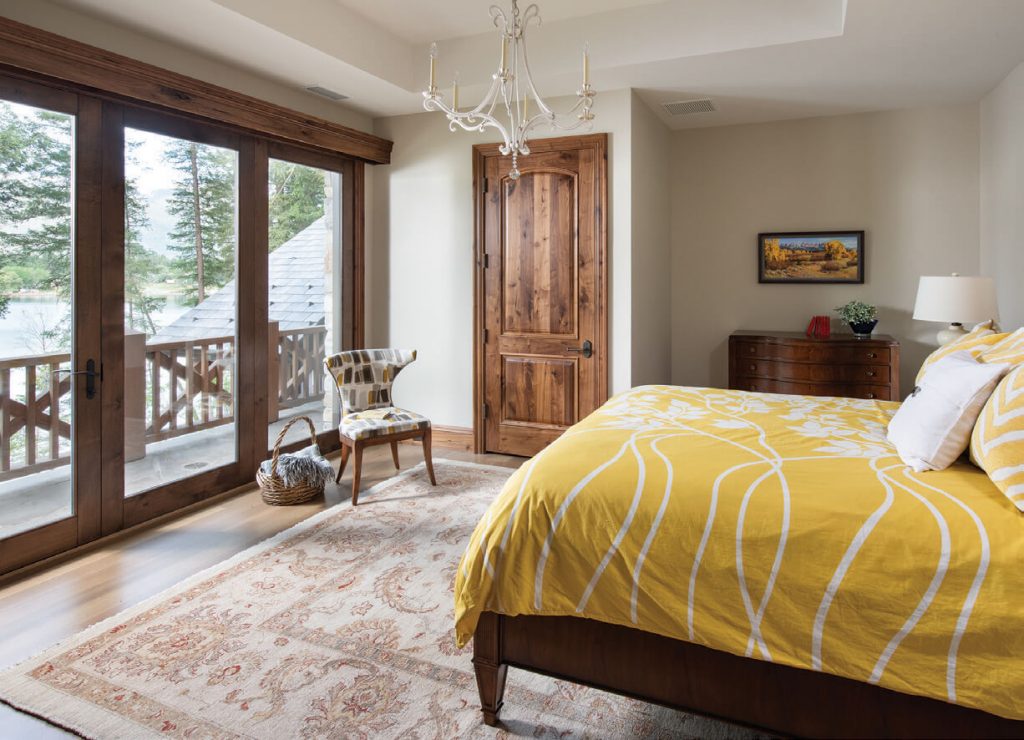 In this upstairs guest bedroom, a balcony overlooks Echo Lake and extends the room’s footprint outdoors.

The couple waterskis three or four days a week in the summer. They host their family for memorable holidays, and they visit with friends on the dock or go for a cocktail cruise across the lake while the sun sets in the evening. Plus, all grandchildren love visiting their grandparents at a lake house, Kevin says, and the Cummings have three under the age of 3 to share theirs with. “There’s no better place in the world than to go out to your grandparents’ lake house in the summer. And we think our grandchildren will love it as much as we do,” he says.