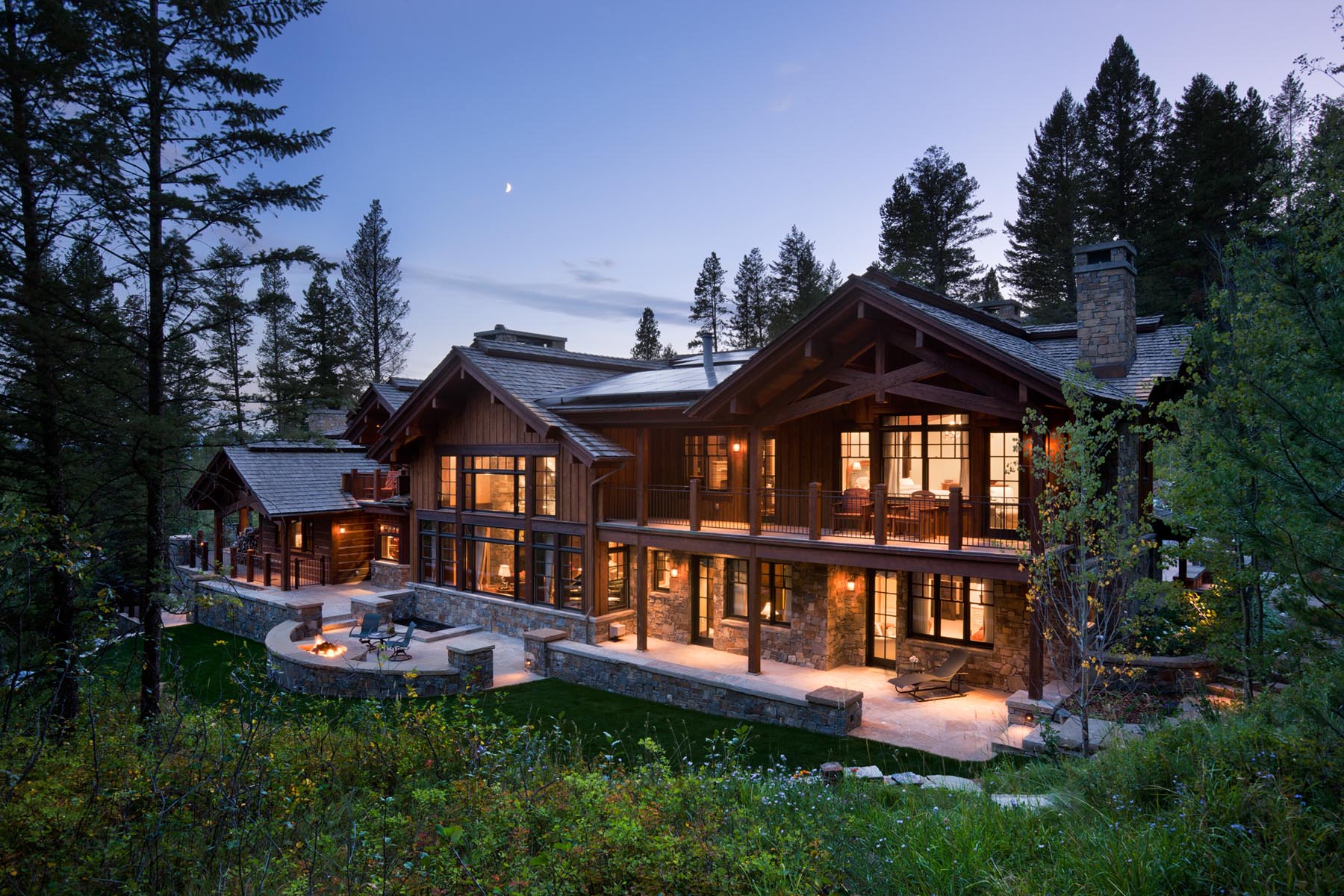 I KNOW THIS HOUSE is in Teton Village, on the slopes of the Jackson Hole Mountain Resort, but driving up the road leading to it, it feels more like I’m headed for Grand Teton National Park, which is adjacent to the ski area to the north. The crowds, noises, and buildings of Teton Village are way behind — and below. Just as I think we can’t go any further without crossing the national park’s southern boundary, we pull into an aspen-lined, gently sloping drive to the port cochere.

I am here to visit Elizabeth and Dan Hennessy at their Grand Teton National Park-inspired family retreat. The home could be a luxurious national park lodge: classic, substantial, and striking just the right balance of elegance and rusticity.

Walking into the foyer of the Hennessy’s 12,000-square foot ski-in/ski-out home, which is indeed backed up against the southern boundary of Grand Teton National Park, you can immediately see what Clancy means.

To the left, an open stairway gracefully curves to the second floor; and descends to the fully finished basement. In both directions, it winds its way around a custom-made 26-foot-tall copper light fixture. The fixture, which was delivered on its own flatbed truck, hangs from the second-story ceiling and stretches the entire height of the staircase. A custom wrought-iron railing of aspen leaves follows the stairway’s fluid curves.

“The owners encouraged the design team to create a stair and entry experience that is unmatched in any project I have been involved with to date,” says John Kjos, the project architect at Jackson-based Ellis Nunn Architects. “The stairs, light, and rail ing are truly a work of art.”

The stairway, which was inspired by elements from their Lake Forest, Illinois home, is only one of the unique custom details. There are the Jerusalem Stone tile mosaics in the master bath. There is a deck or patio attached to each of the eight upper level bedrooms, which also all have their own full bathrooms. Another patio, this one covered, doubles as an outdoor kitchen and has its own skylights and wood-burning masonry fireplace. The outdoor hot tub was custom fabricated by a specialist in California. The coffered, under-lit ceiling in the dining room is both a mechanical and electrical marvel.

“It was a real pleasure for Teton Heritage Builders to work on a project of this caliber and complexity,” Clancy says.

Yes, it sounds formal, especially for the mountain retreat of a family with six children between the ages of 11 and 26. But, between the whimsical three-story entry light fixture, the songbirds Elizabeth Hennessy designed to be hidden among the wrought-iron leaves in the main stairway’s railing, the reading and resting nooks tucked throughout, the notty-alder ski lockers in the basement, the 35 photo-voltaic solar panels on the roof, and the abundance of candid family photos in almost all public areas, it’s a formal that works well in Wyoming.

“There’s no doubt there are formal elements, but not like a city home has,” says Elizabeth, who, with husband Dan, actively collaborated with the entire design and build process. “The wood beams, stone walls, and plaster make it more informal than it would otherwise be. But I’d say it was an elegant informal. All the nature around it makes it — and us — more relaxed as well too.”

The family gathers in the formal dining room with its bay window and coffered ceiling several times a year, but, “The kitchen is by far the most popular room in the house,” Elizabeth says. The day I walk through, the two youngest daughters are perched on a window seat overlooking the backyard and the spectacular wilderness only a few feet away. Elizabeth often enjoys the same seat, careful to keep an eye out for wildlife. “We see everything here,” she says. “Yesterday elk were munching on my flowers. Moose walk through.” Last spring she was on the patio and a black bear wandered by.

As the girls plan their day from their window seats, Elizabeth talks about one of her sons soon to arrive. “He loves cooking in this kitchen,” she says. “He says he’s been planning meals for weeks already.” The coffered dining room is gorgeous, but it’s easier to imagine the entire family gathered around the eight-foot square butcher block island that dominates the kitchen’s work area. Rather than noticing the professional-grade appliances, visitors smile at the magnets on the oversized fridge: rainbow hearts, turtles, unicorns, over-sized butterflies, are all the handiwork of the Hennessey girls.

Dan’s favorite room is the great room — “The floor-to-ceiling windows bring the Park up close and personal.”  When not in the kitchen, Elizabeth can be found in her “nook” library on the lower level. And the older children gravitate to the inviting den, which is clubhouse, game central and movie theatre all rolled into one cozy space. The home’s ski-in entrance leads to this den and Elizabeth made sure the designers, Colorado-based Slifer Designs, found an appropriately large and comfy sofa for them to collapse on.

“The Hennessys worked really hard with us and Slifer and were able to personalize the house to create a place they can really call home,” Kjos says. “And it’s a home that will stand the test of time, from the overall design and design elements throughout to the quality of construction. ‘Timeless’ is a signature aspect of all Ellis Nunn Architects’ projects.” 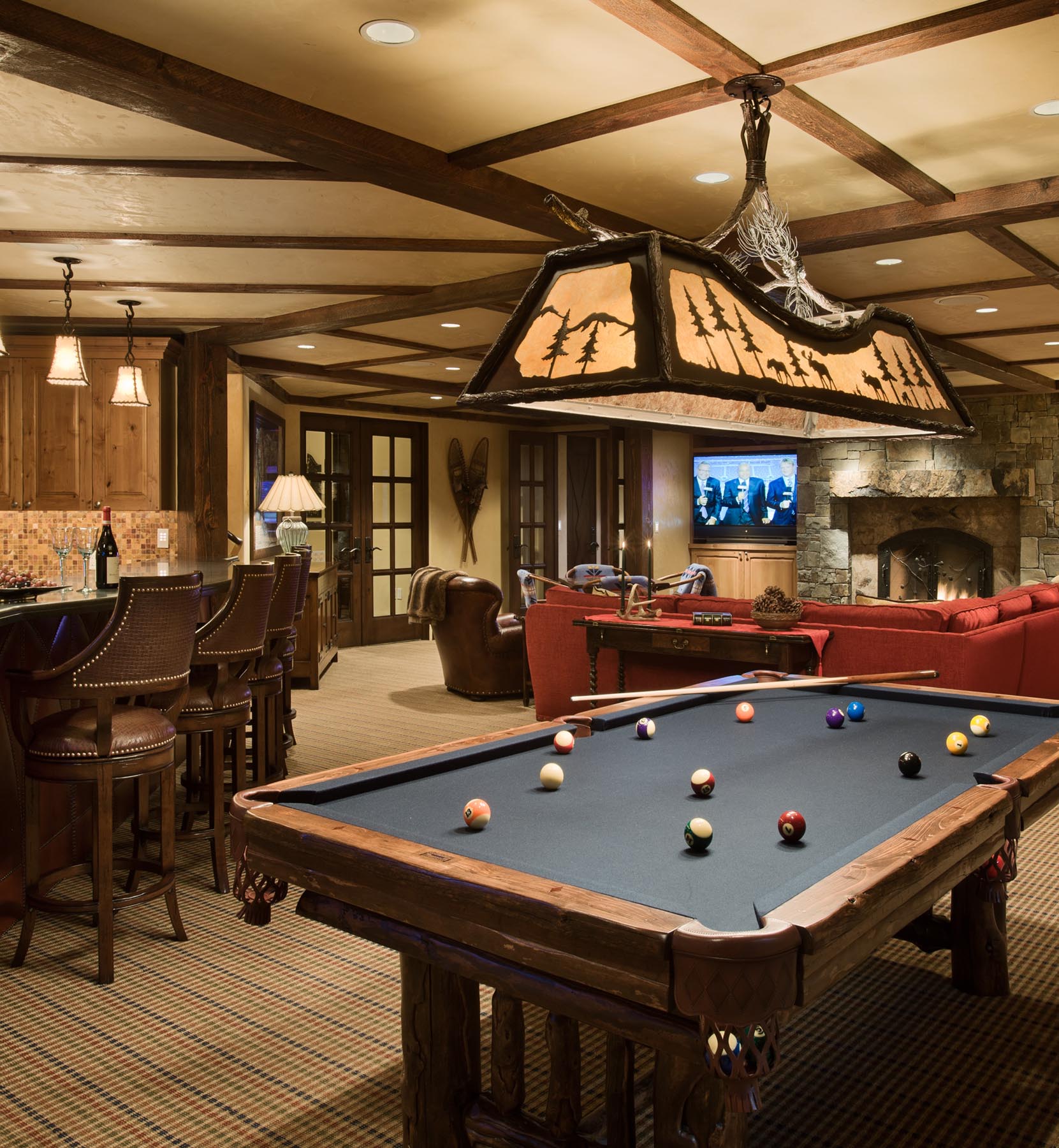 The game room was designed as a gathering place in clubhouse style, it is equipped with an entertainment center, billiard table and bar. 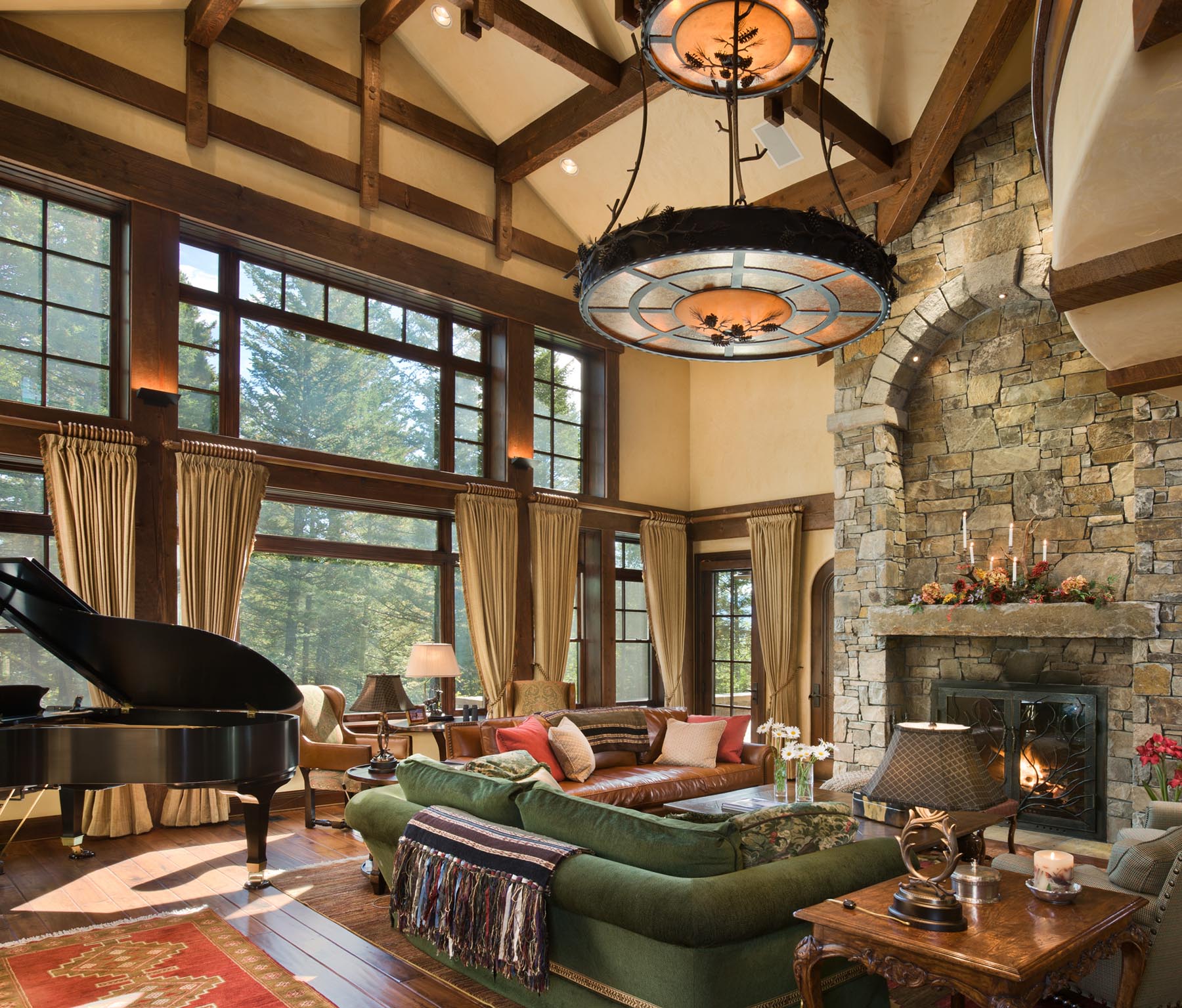 In the great room, cozy couches, a grand piano and a warm color palette imbues the home with comfort. 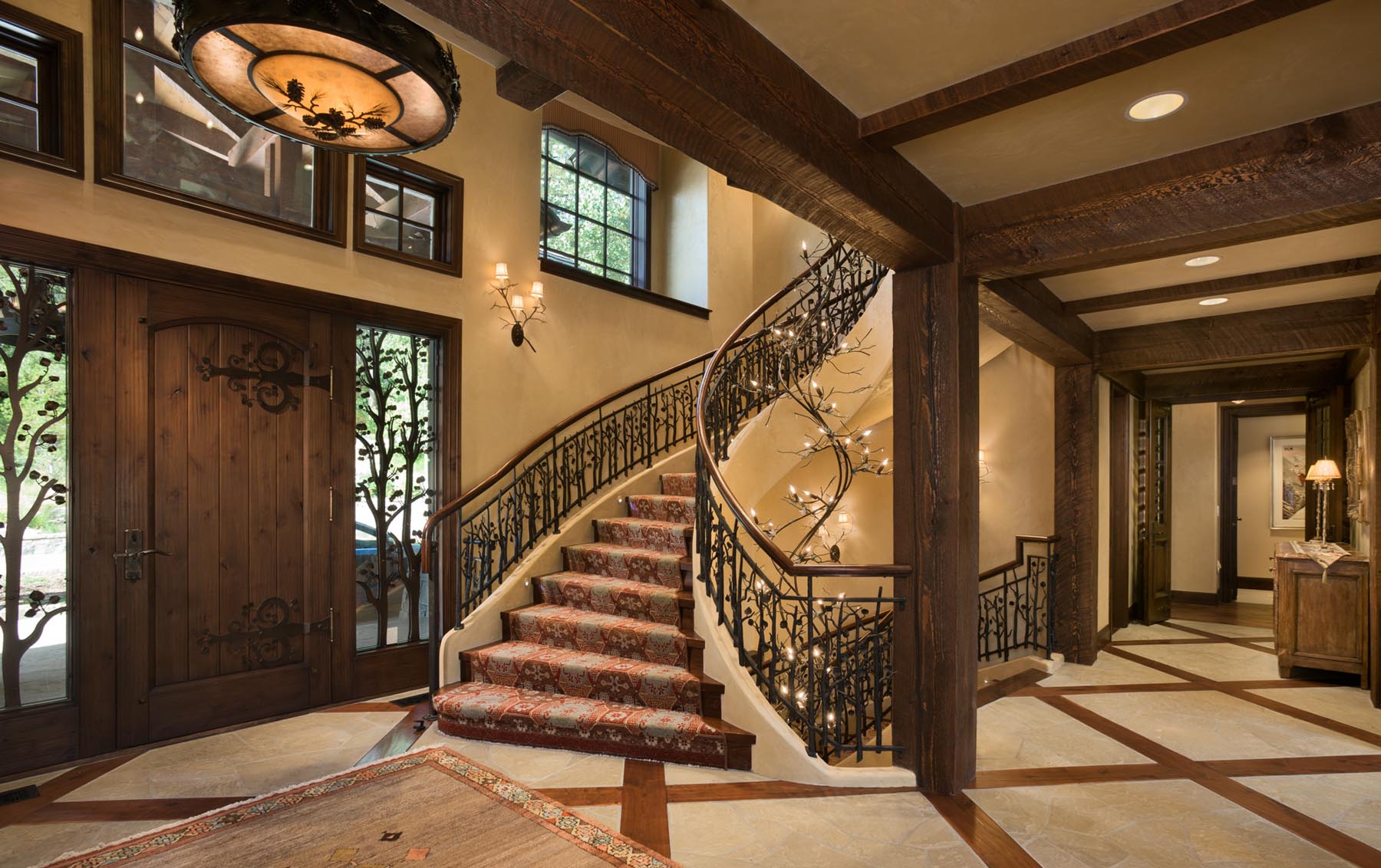 Look closely at the custom iron railing of the grand staircase and you can see birds — Mrs. Hennessy’s idea — hiding among the aspen leaves. 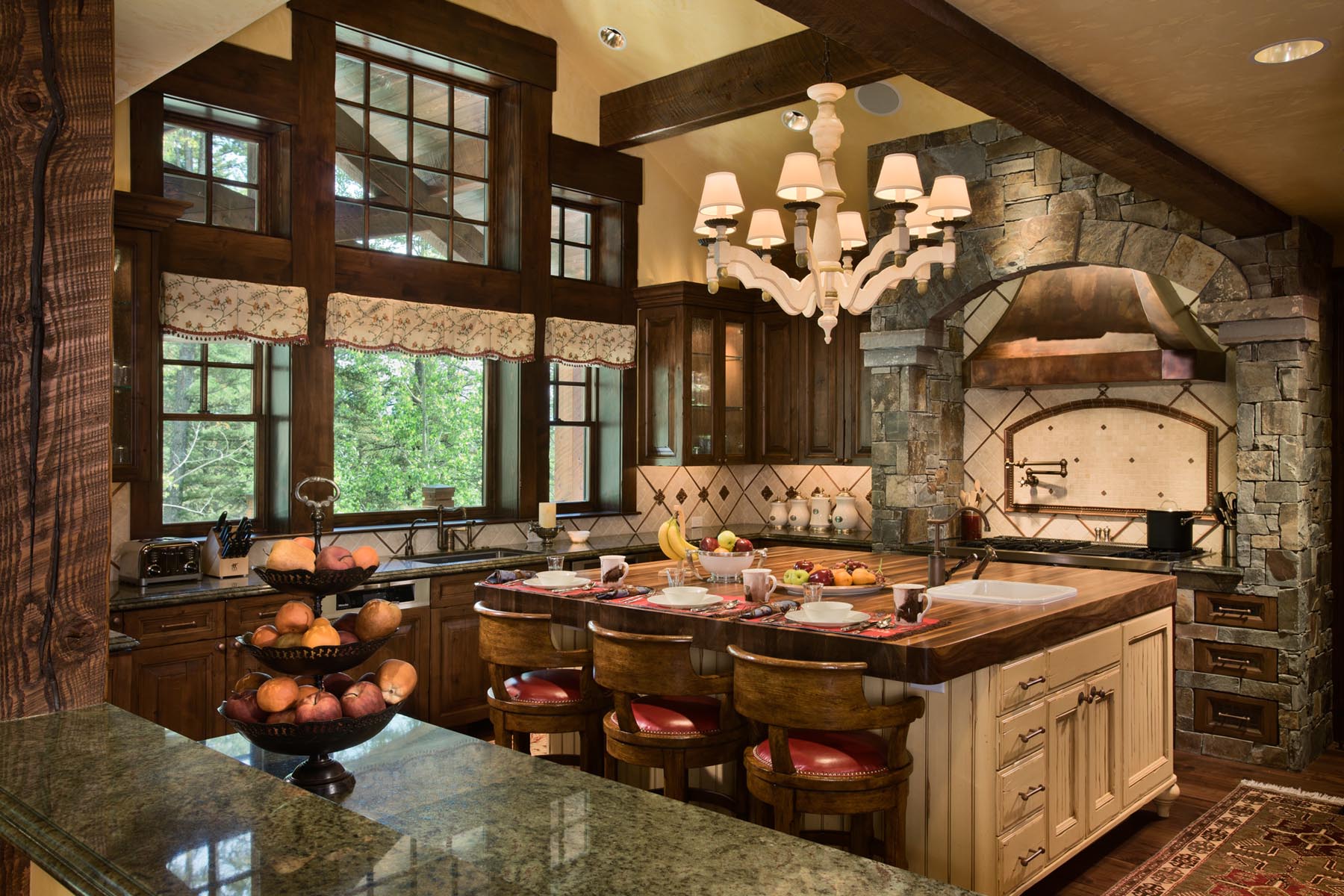 The heart of the home is the kitchen. The family gathers inside around the oversized butcher block island; wildlife gathers outside the kitchen window.

Left: There is easy access to the outside from almost every room – public and private – in the home. • Center: The Hennessy family tries to get together – trading stories and laughs in the formal dining room – a couple times a year. • Right: Accented with heavy timbers and wrought iron, the second story hallway overlooks both the entryway and the great room.