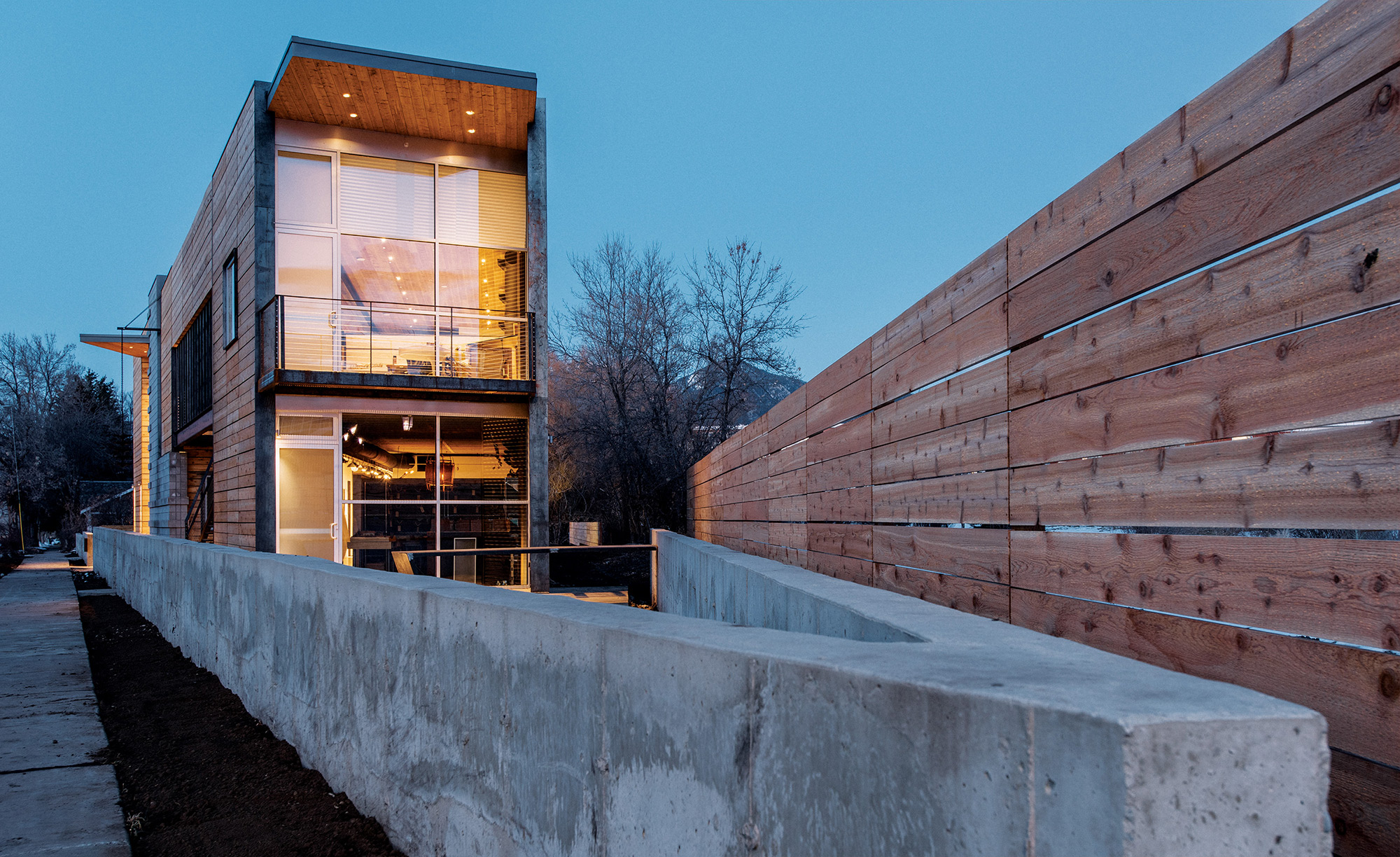 Pearson Design Group (PDG), of Bozeman, has a new home, a wedge-shaped, flat-roofed structure of wood, concrete and steel that founding principal and lead designer Larry Pearson calls his contemporary warehouse. Although, it is more elegant than the term may imply.

Art needs limitations and the odd-shaped lot on which the building sits is its defining design element; the neighborhood its inspiration. Now 102 Broadway, the .3-acre property is a triangle between a private home, Broadway (a street perpendicular to Main Street that penetrates Bozeman’s historic industrial sector), and an active spur of Montana Rail Link that dead ends at an old grain elevator a block away. It is not an obvious site for an office building, but this mixed-use intersection is typical of a district in transition where infilling is an opportunity to express originality while retaining proximity to downtown. What better place for an architectural firm?

Designed in-house by Pearson along with PDG principal and project architect Josh Barr, and built by Justin Bowland of Bozeman’s Yellowstone Traditions (YT), the 6,600-square-foot, two-story office building’s style is a departure from past collaborations between the companies. Two decades ago, they built their reputations building rustic homes made of log and stone. These days, both embrace the modern style that is increasingly popular in the Rocky Mountain West. They had not worked together in years, but YT is run by principals Ron Adams and Justin Bowland, so Pearson saw collaborating on his office as an opportunity to “get to know the new YT.”

Pearson calls the style of 102, “indigenous modern.” Meaning, its design attempts to pay tribute to the cultural and historic crossroads it inhabits. Materials such as recycled timbers were locally sourced. The office’s site-specific shape is simple and pragmatic. And, like the neighboring grain elevator, purpose determined design. Pearson says, “It’s about something that is functional, not about detail and ornament.”

While not highly ornamented, the building is handsome. Horizontal Western Red Cedar covers two exteriors, including the façade, which is divided by an L-shaped wall of concrete blocks and steps that lead to the main door within a recessed wall of glass. A corner of roof juts above the entrance. Further south, the second-story emergency exit staircase is partly immersed within vertical ribs of steel. A rain chain made of five harrow disks hangs from the apex of the building. An homage to Montana’s agricultural heritage, this sculptural detail built by YT’s Bowland serves a purpose, channeling the water from the center of the concave roof. It also casts a playful shadow.

The southern, 16-foot-wide vertex of the building is open, as if someone bit the point off a piece of cake. Squares of glass framed by steel allow sunlight and views of Main Street. Off the second floor hangs a metal deck. Below is an outdoor concrete patio. Trees will eventually fill in the tip of the property, adding privacy.

Transitional spaces like this excite Pearson. He received his degree in architecture from the University of California at Santa Cruz and has been working in Montana since 1996, so his aesthetic and values are influenced by the vernacular architecture and landscapes of the West and West Coast. “I can’t compete with [landscape], so I create architecture that opens up to it,” he says.

New technology has made this easier. Triple glaze windows, ground source heat pumps and other environmentally conscious options also, in Pearson’s view, allow his company’s buildings to “… speak the language of responsibility [to the land].” Yellowstone Traditions too, according to the company’s mission statement, values “minimizing the impact on the … landscape.”

In keeping with these standards, and because of a high water table and deep topsoil, the teams chose to forego a traditional foundation and used instead an ingenious piling system called helical piers. Manufactured of steel, these pins are driven, like ice augers, into subsoil. Forty-two of them support the office, thus saving the need to excavate then replace tons of fill.

The steel pins were also used by Bowland as legs for the office’s bathroom countertops, wooden benches and a display table. He welded decorative features on-site and also utilized YT’s extensive workshop. “We don’t get thought of as building architectural steel structures, yet we have the craftsmanship and people,” Bowland says of YT.

The use of structural elements as detail is also apparent in 102’s foyer where steel columns and beams, and rough-sawn floor joists are visible. There, two Arne Norell leather chairs sit underneath a staircase of aged timber planks that climbs a wall of white, troweled plaster. “I wanted it to feel like it was an old block wall that pre-dated the building,” Pearson says. This imaginary repurposing is a theme in his work. It gives him a story on which to further develop the narrative of the space.

When a graffiti-covered train rolls by you feel the story of 102 and its neighborhood. It is playful and purposeful. This narrative evolved along the way because Bowland was willing to accommodate Pearson’s creative process. “I like capturing opportunities during construction,” Pearson says. “I wanted to be a creative participant throughout the delivery of the project.” For his part, Bowland explains, “Even though the project was commercial in nature, I approached it as I would a high-end custom home.”

Their collaboration was a success. Pearson Design Group’s new office shows the capabilities of both companies to create modern and custom commercial buildings. Given its location, style and engineering, 102 is unique to town, and locals have dubbed it “Bozeman’s Flatiron.” Most importantly, the teams had fun and the client got what he wanted.

“Getting people to think about space, about artistry, [and] about how we live…I guess that’s what I believe in,” said architect Larry Pearson. 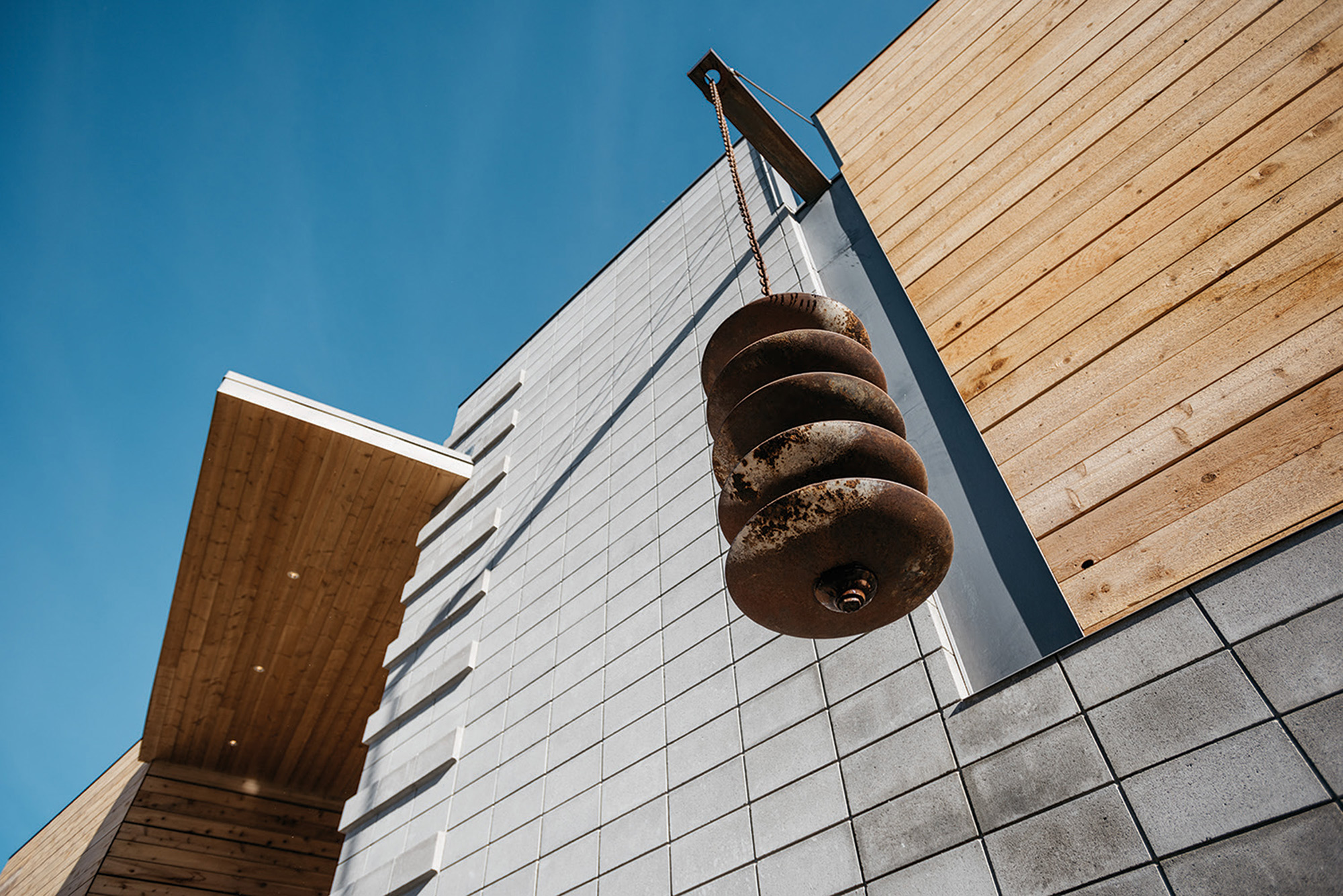 Circles and lines; a rain chain made of five salvaged harrow disks is 102’s “water feature.” 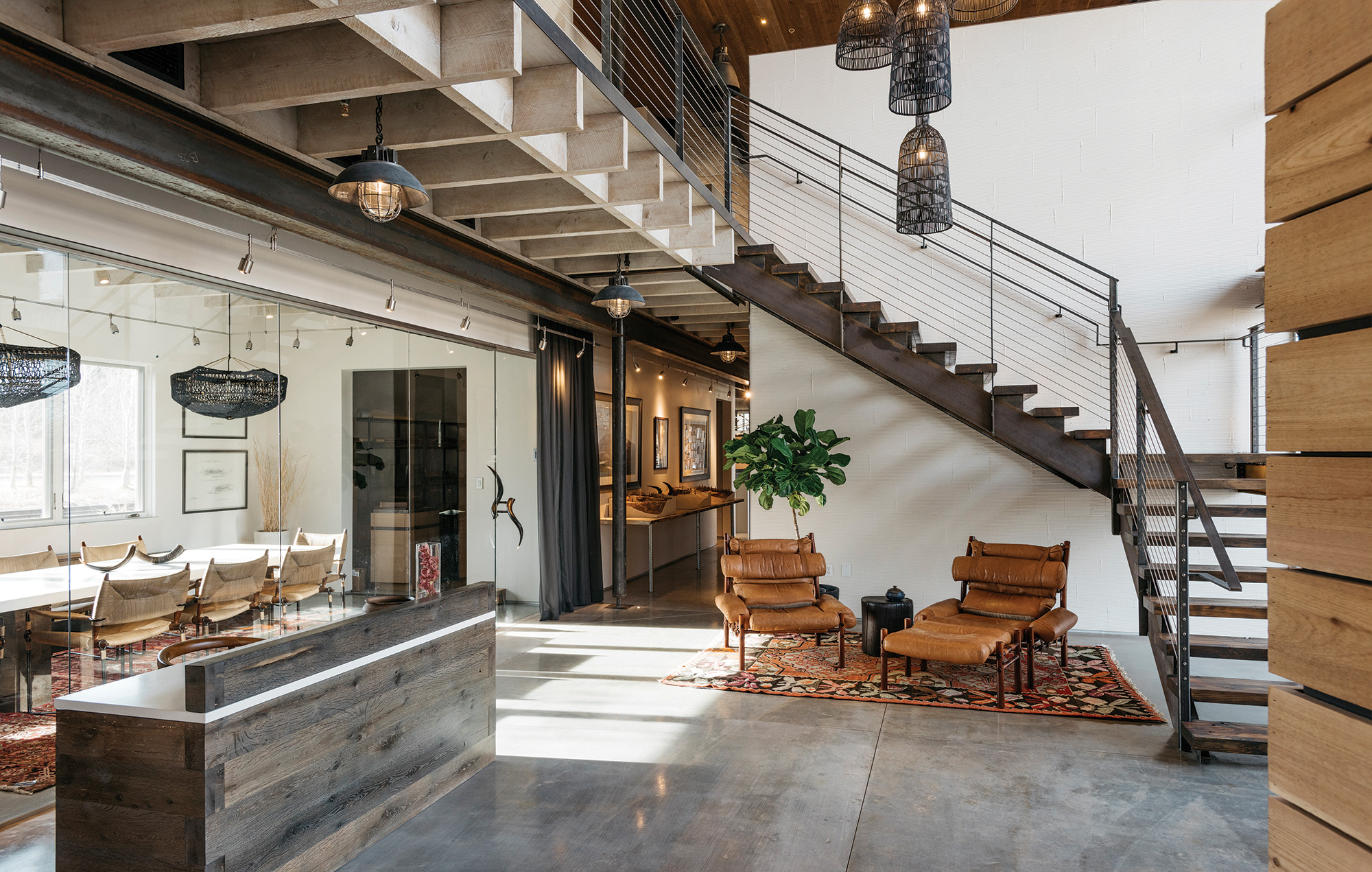 In the foyer, the cool of concrete and steel is warmed by tones from wood and leather and organic details, such as the conference room door’s kudu horn handle. 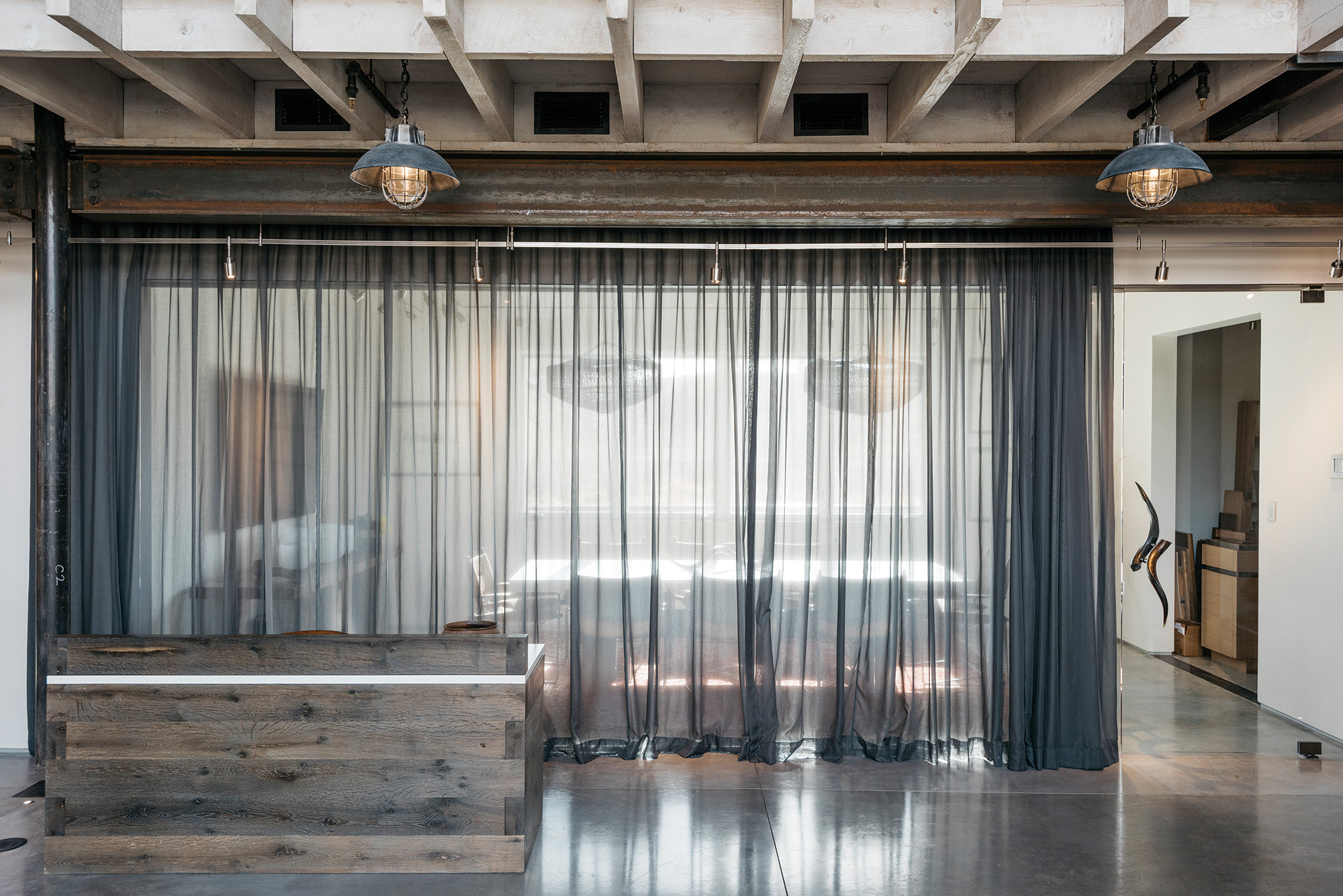 A privacy curtain is drawn across the glass-walled conference room where a picture window provides ample sunlight and views of passing trains.

The façade’s spaced and floating rain screen siding will be treated to accelerate the gray that results as Western Red Cedar naturally ages. 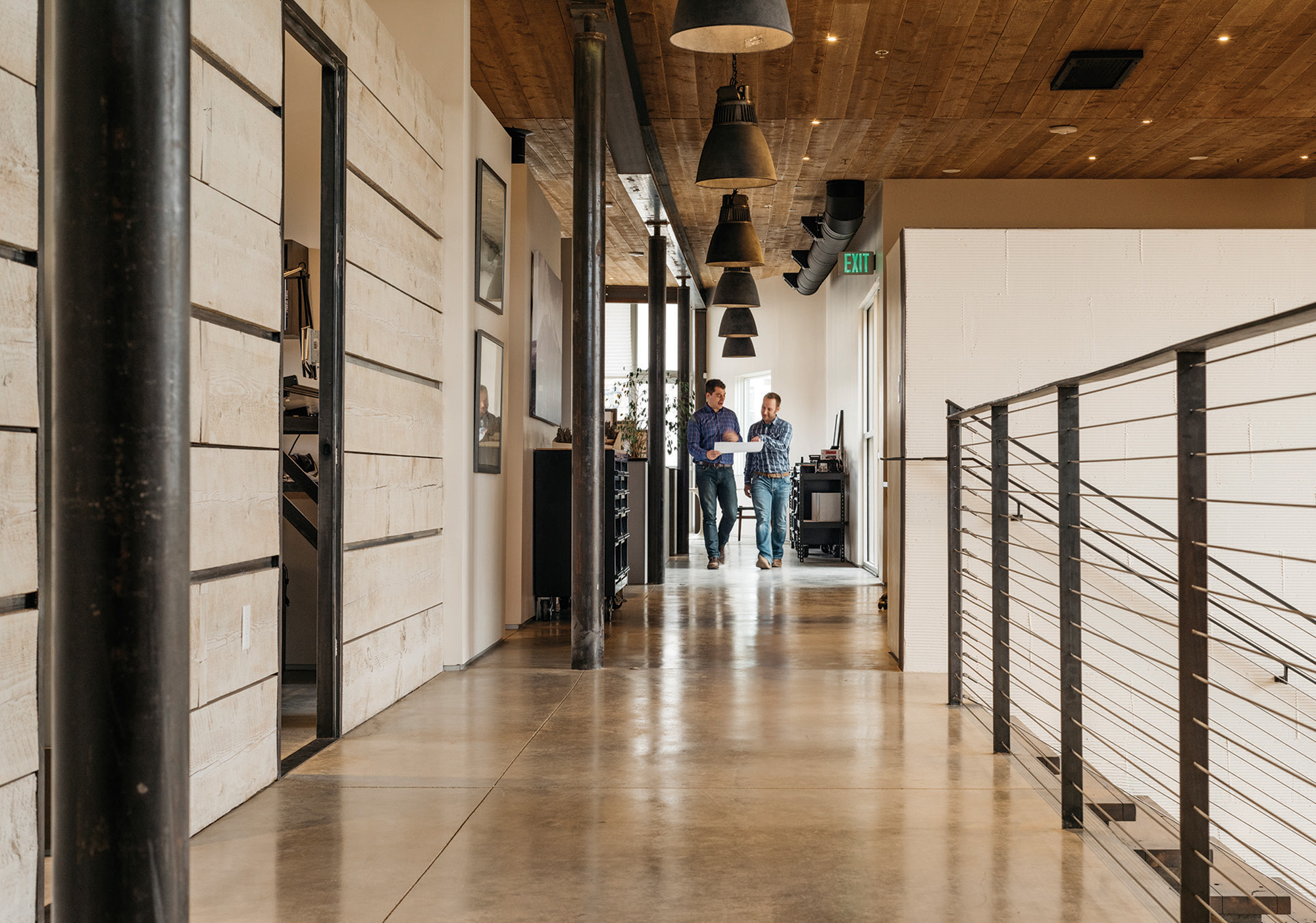 To add texture, Bowland used the rough-sawn floor joists over steel to side one wall of offices. 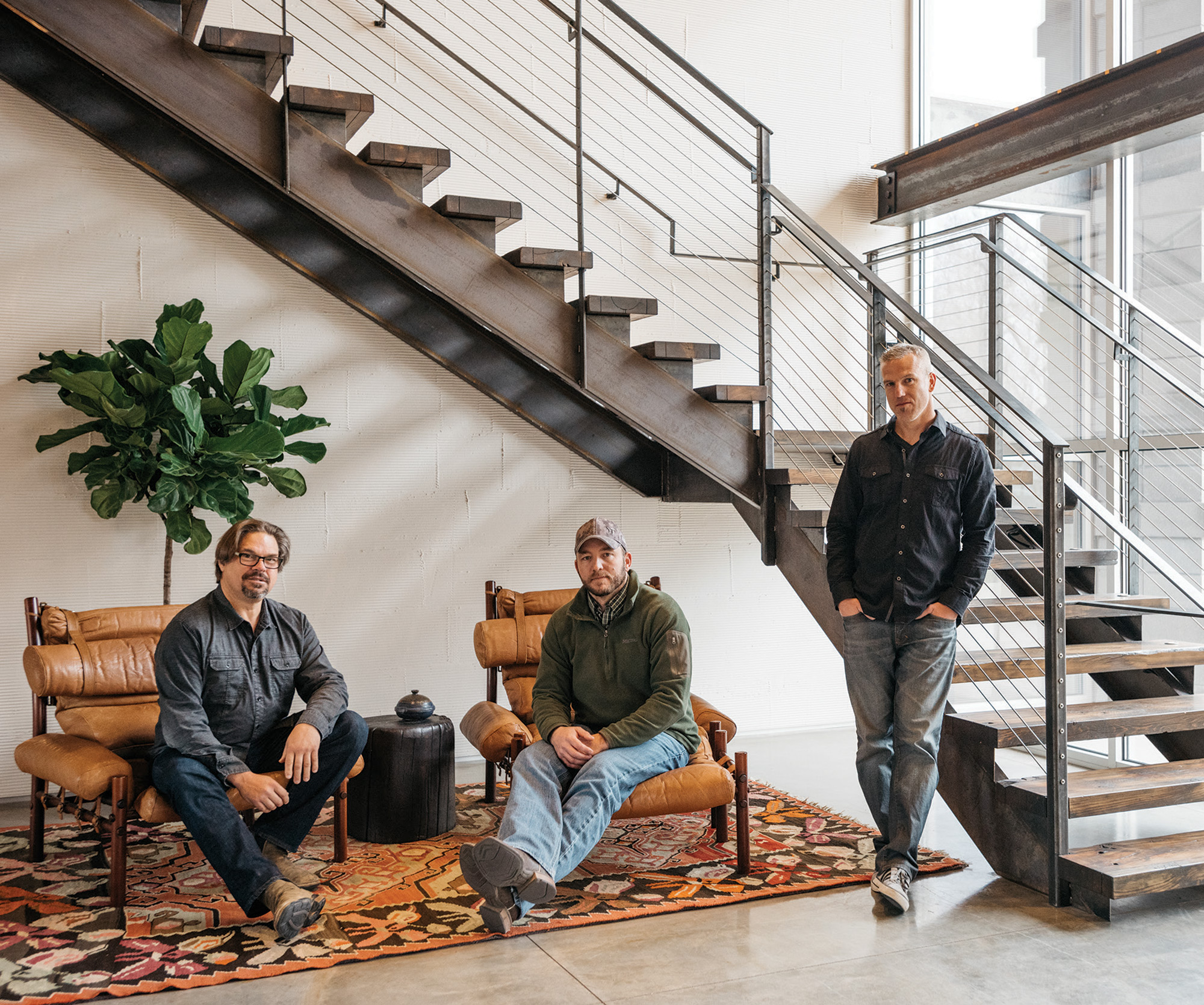