14 Apr In Search of Simplicity

ASK BILL COLLINS TO NAME HIS FAVORITE FEATURE of his family’s newly built Big Sky, Montana, home — aside from the garage, which is more like an immaculate, state-of-the-art man cave — and he’ll admit that it’s the outdoor shower. It’s here, standing under the warm water while looking out toward the thick timber and mountain views — where the only creature that’s likely to catch a peek is a wandering deer, moose, or elk — that he can truly relax and appreciate this newfound life.

When Bill and Shannon Collins moved from Boston, Massachusetts, to Big Sky, they were ready to let go of the commutes, the fast pace, and the 4-hour drives to ski. And they wanted their daughter, now 8, to experience small-town living and a healthy dose of nature. Bill was no stranger to mountain towns; he spent a few years ski bumming in Vail, Colorado, before he took up a career in the commercial real estate industry, and the family made frequent trips to Jackson Hole, Wyoming, to visit friends, fish, and ski.

“Living in the mountains changed my life forever,” Bill said. “We loved it out West, and we really wanted to be here eventually.”
When Bill took a job in 2010 as director of sales for the Yellowstone Club, a private residential ski and golf club, their mountain living dreams came true. But it wasn’t until their home in the Spanish Peaks community was completed in 2014 that it fully came to fruition. The home feels remote on its 6-acre lot, yet it’s close to the town center; it’s relatively small, given the area, with 4,000 square feet of living space (5,300 including the garage), yet it feels surprisingly spacious; it’s traditional, yet it has contemporary touches throughout; and it’s comfortable, yet elegant.

“We are ‘less-is-more’ type people, and we really wanted it to be clean and comfortable,” Bill explained. “We also wanted something that feels very inviting, so when people come in they feel like it’s OK to jump right onto the couch and relax.”

Walking through the front door from the courtyard, the home is bright and airy with large windows facing the tree-lined hillside, high ceilings, and an open floor plan that joins the kitchen, dining, and living rooms. “We wanted to build simply and use the space in the way that we like to live,” Shannon said.

Shortly after purchasing the lot, the Collins were approached by Jamie Daugaard, principal of Centre Sky Architecture. As it turned out, Daugaard had already spent countless hours on that very lot designing a home that wasn’t built due to the recession. He was oozing with ideas and couldn’t wait to bring them to life.
Bill and Shannon were also full of ideas. After working in commercial real estate for many years, Bill had seen just about every style and design element out there, making mental notes of the special touches he would one day implement in his own home. Shannon, with a keen eye for design, also had ideas of what she did — and didn’t — want. “Bill likes the industrial look, and I’m more traditional,” Shannon explained. “But we had so much fun with it, and right away we were all on the same page with using a mix of cool materials in a traditional form, so it’s rustic with a modern flair.”

Daugaard created a traditional, barn-like exterior and used a mix of timber, reclaimed lumber, stone, and steel inside and out, leaving some details exposed for the sake of simplicity and natural beauty. “We liked that hybrid application of timber and steel for the exterior, and it’s already weathered together; it looks like it’s been there for a long time,” he said.

Leaning toward Mountain Modern designs for the interior, they also used the less-is-more approach. “Mountain Modern is a cleaner type of application with less ornamentation and a smaller number of exterior and interior materials that make up that palette,” Daugaard explained. “We got a little funky as far as artistic value to the home; it’s like a traditional home, but we were able to bring the steel beam out, for example, and that adds detail and a contemporary touch.”

Shannon and Bill took the lead on the interior design, staying with pale grays and whites, allowing the accents to add lively pops of color throughout. The staircase is lined with a steel wall, steel handrails are made from repurposed railroad tracks, sliding barn doors are used throughout, and a wall off the kitchen is made of stacked wood encased in steel for a one-of-a-kind twist. The kitchen is spacious and bright, with traditional cabinets and marble counters mixed with industrial steel light fixtures.

Dan Gibbons, a partner at PRG Group, was the lead builder who brought these design ideas to life in what turned out to be a uniquely collaborative project. “Bill and Shannon had amazing ideas about how to incorporate different styles, and Jamie, Ben [project manager for Centre Sky] and Dan would figure out how to make it work,” explained PRG Group partner Jamy Patterson. “There was a level of quality and detail that just wasn’t going to be sacrificed.”

Patterson explained that there were two main components involved in the overall theme of the house. “They live in it year-round, so it had to suit the family’s needs. But it also had to be a special gathering and entertaining place, because Bill’s job is to meet and greet people and give them the Montana experience,” he said. “I think this house really does that.”

Bill’s work life can be chaotic at times, but now instead of hosting meetings in a boardroom, much of the time his venue is a ski slope or a blue-ribbon trout stream, and the work talk is fit in on chairlift rides or while releasing a trout from a fly line.

“I can’t imagine going back to our old life,” Shannon said. “I was worried about moving to a remote place, but we’ve really been embraced by the community and have become a part of it.”

Bill agreed wholeheartedly. “We moved to the mountains for a reason,” he said. “It’s a slower pace, and we’ve learned to love every minute of it.” 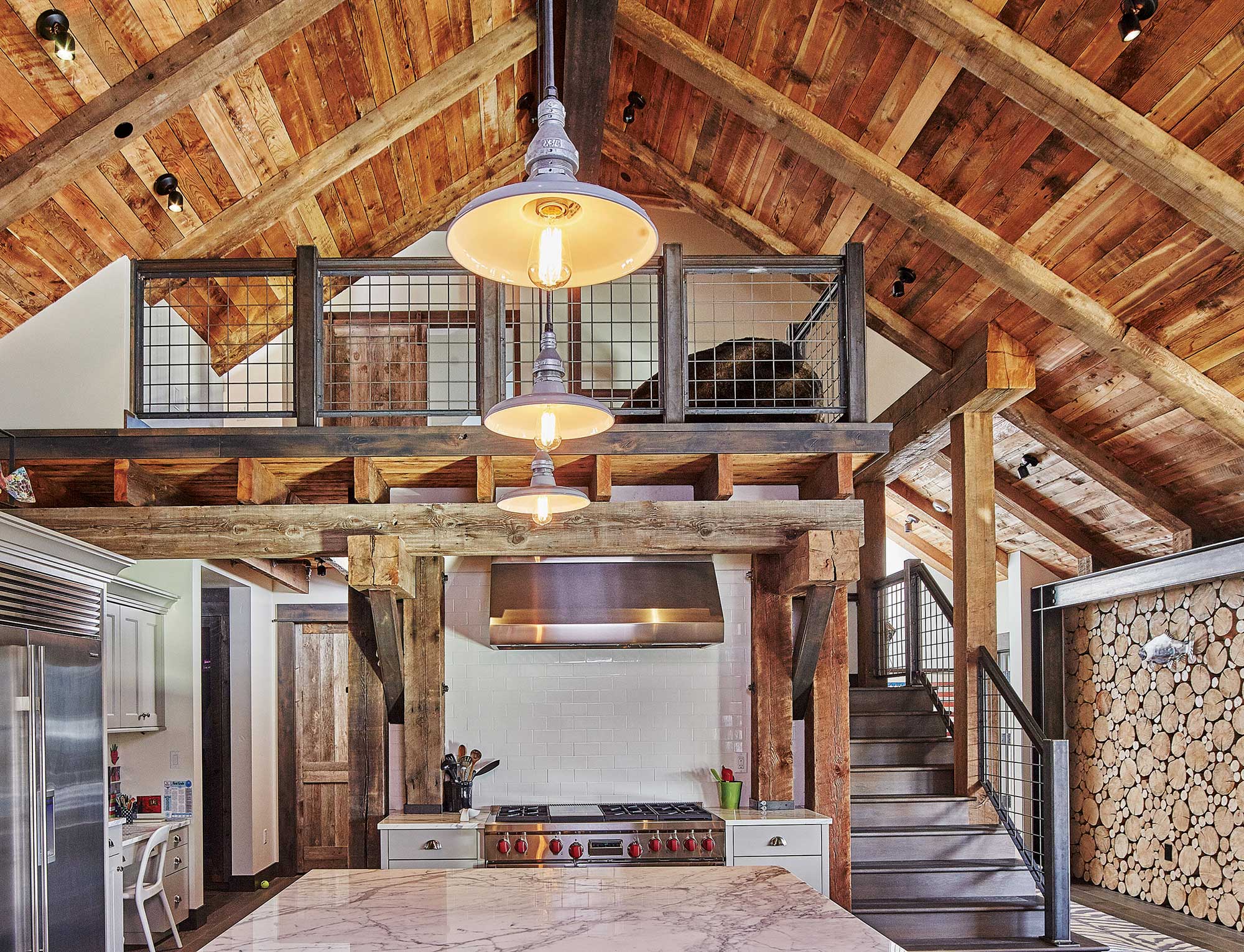 A blend of materials in the interior add industrial touches to a more traditional rustic design, where marble countertops and classic cabinets meet modern light fixtures and exposed steel accents. 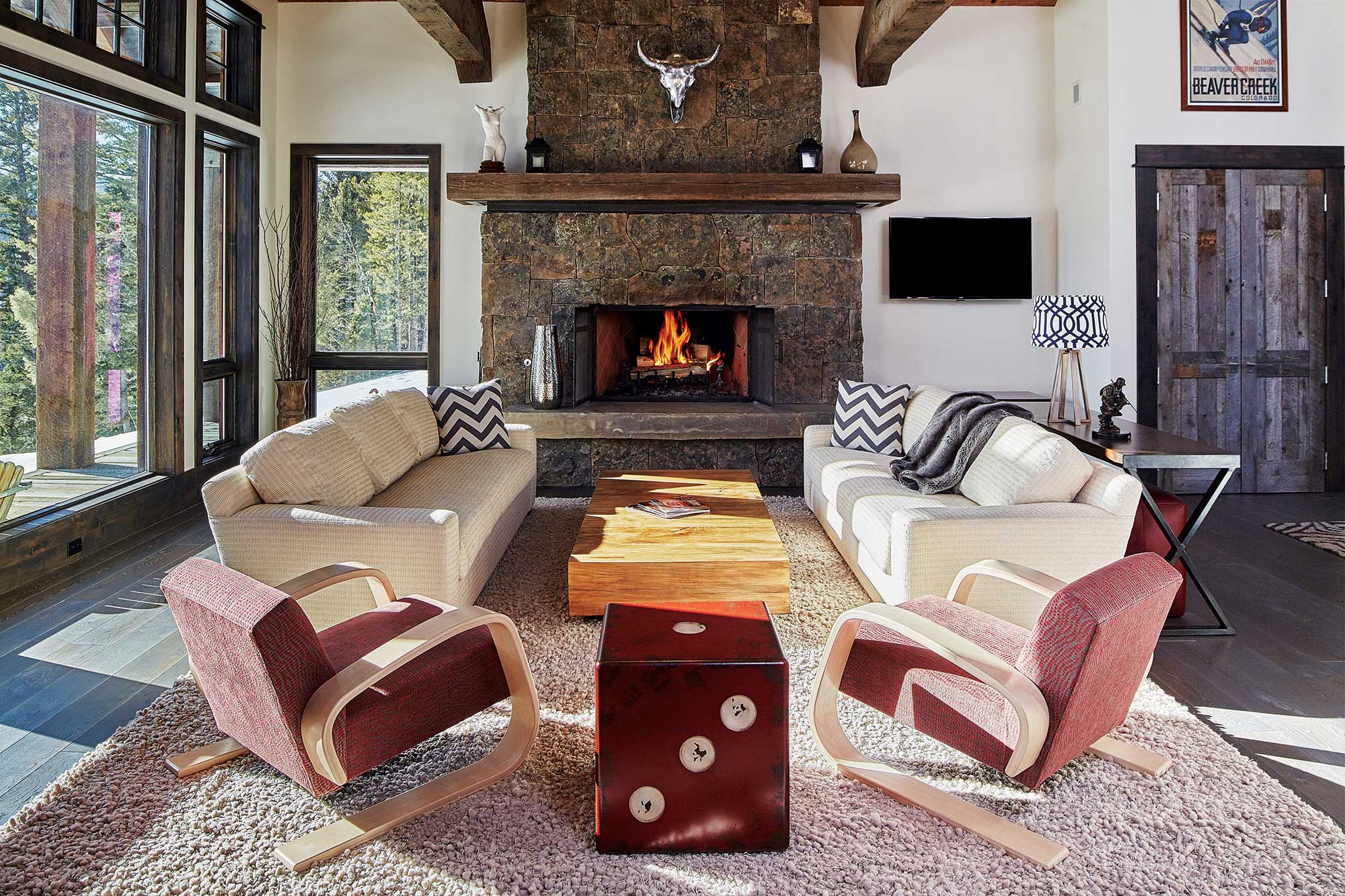 The living room feels light and airy, featuring a wall of windows that look out to the timbered hillside and mountain views. 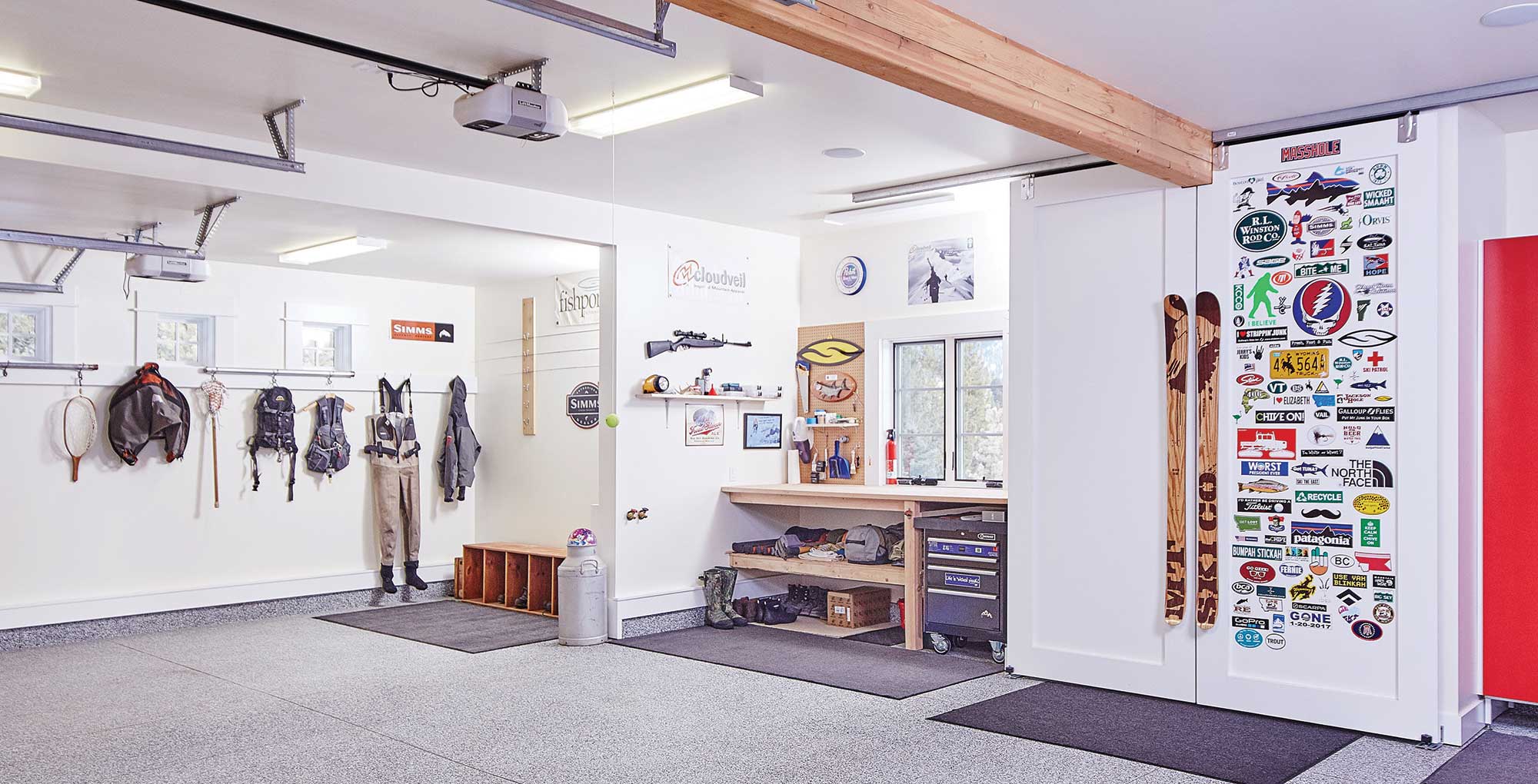 The highly functional garage serves as an organized gear room and workspace. 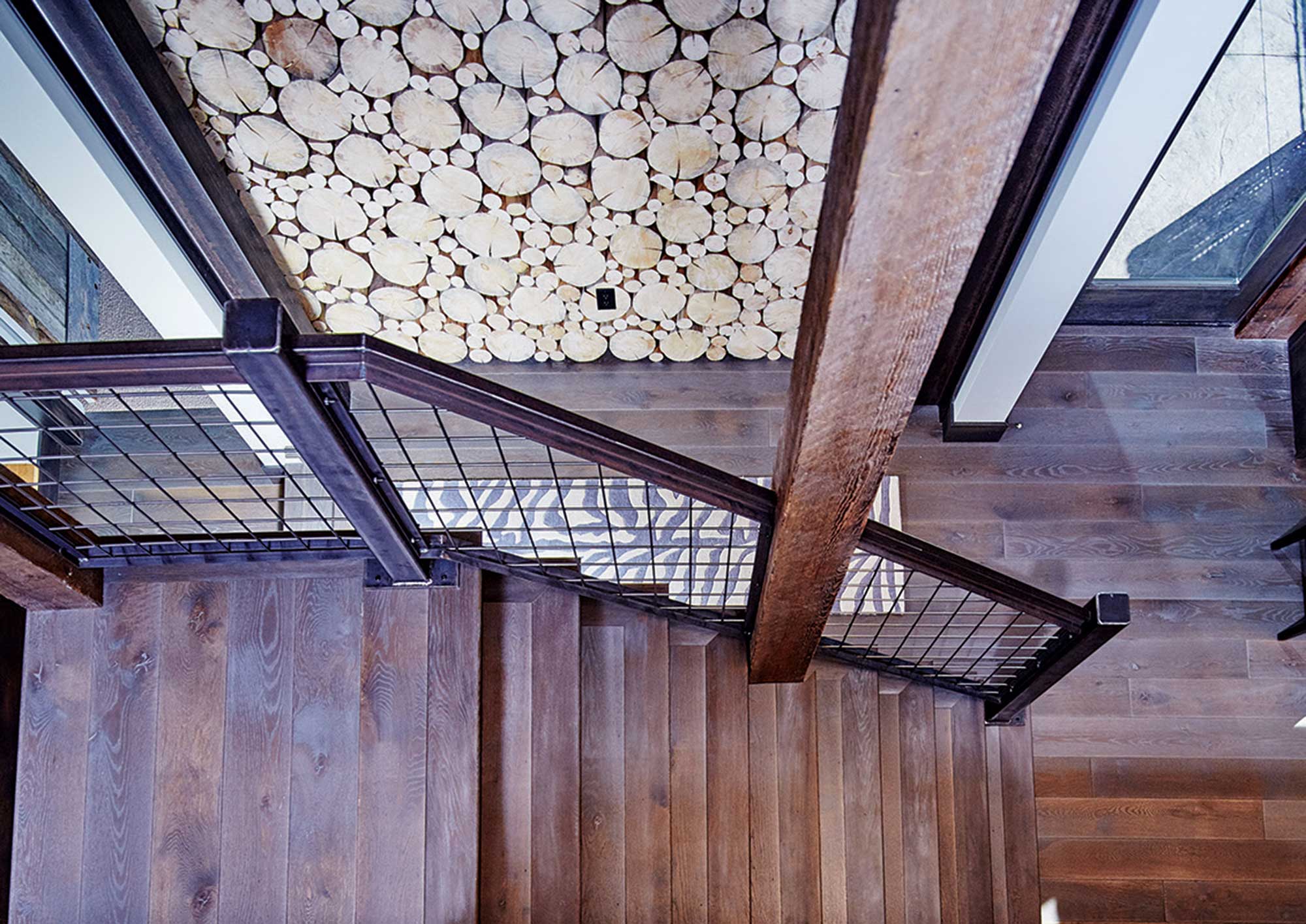 Steel handrails were made from repurposed railroad tracks 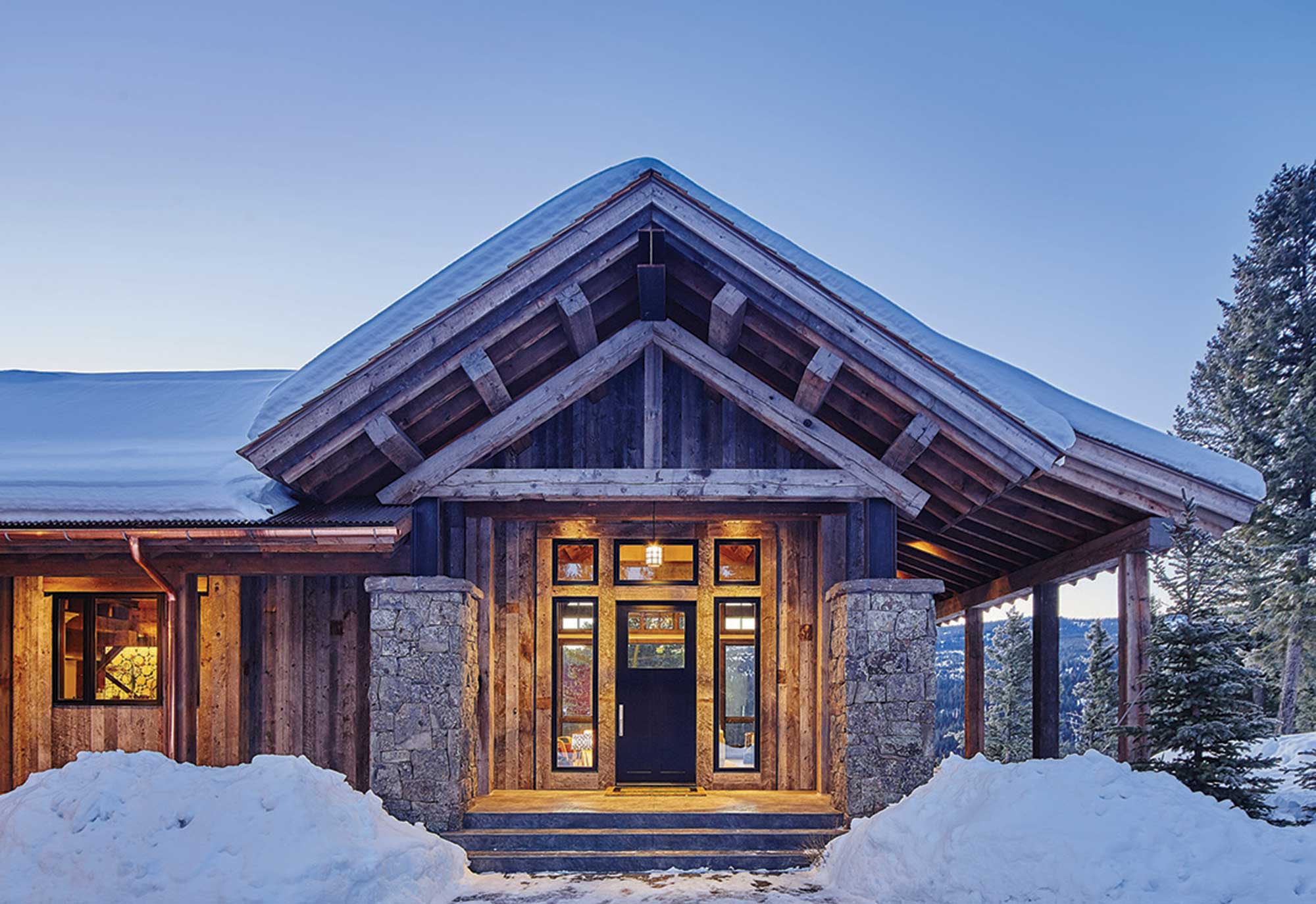 A courtyard opens up to the front door 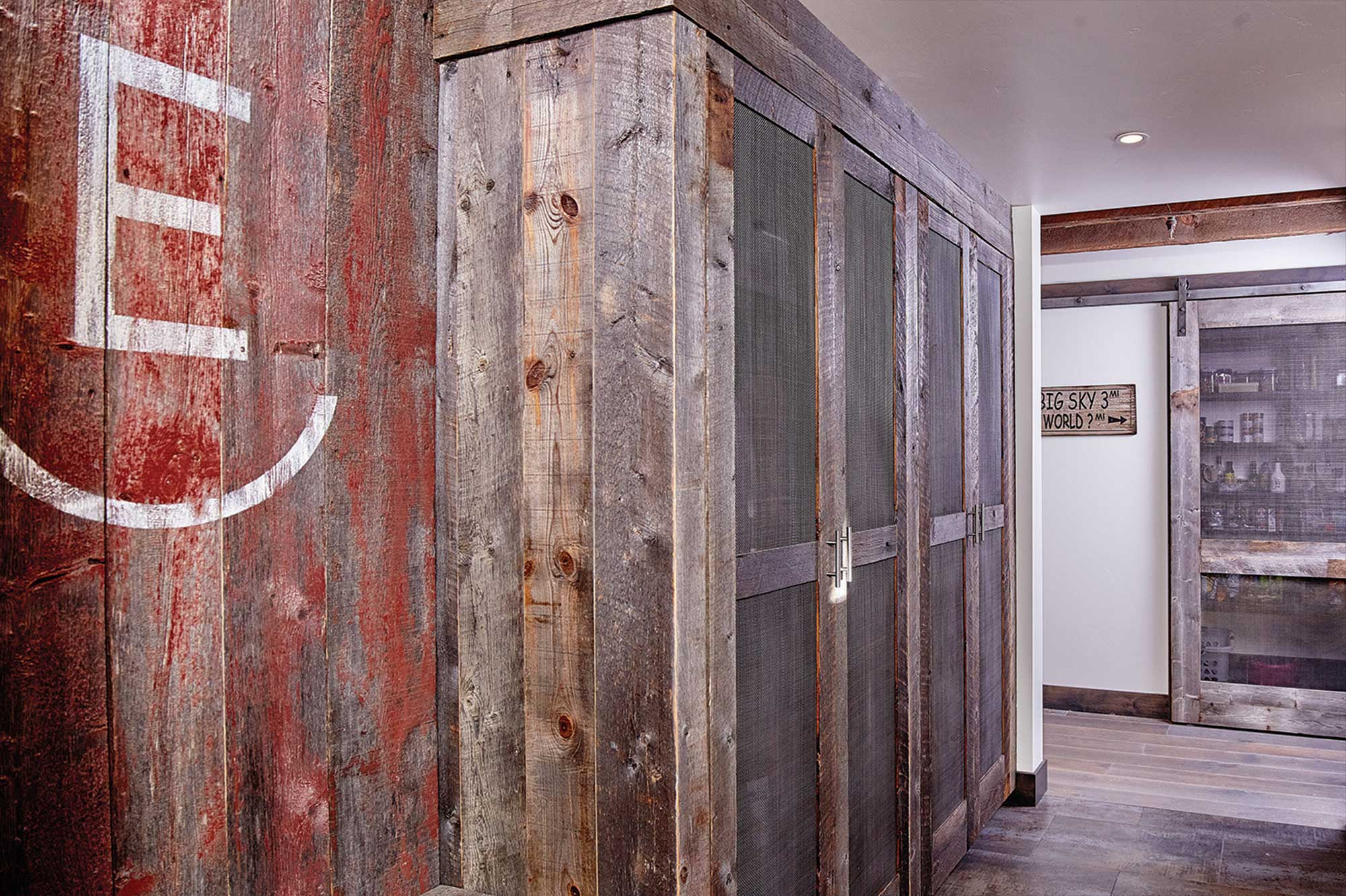 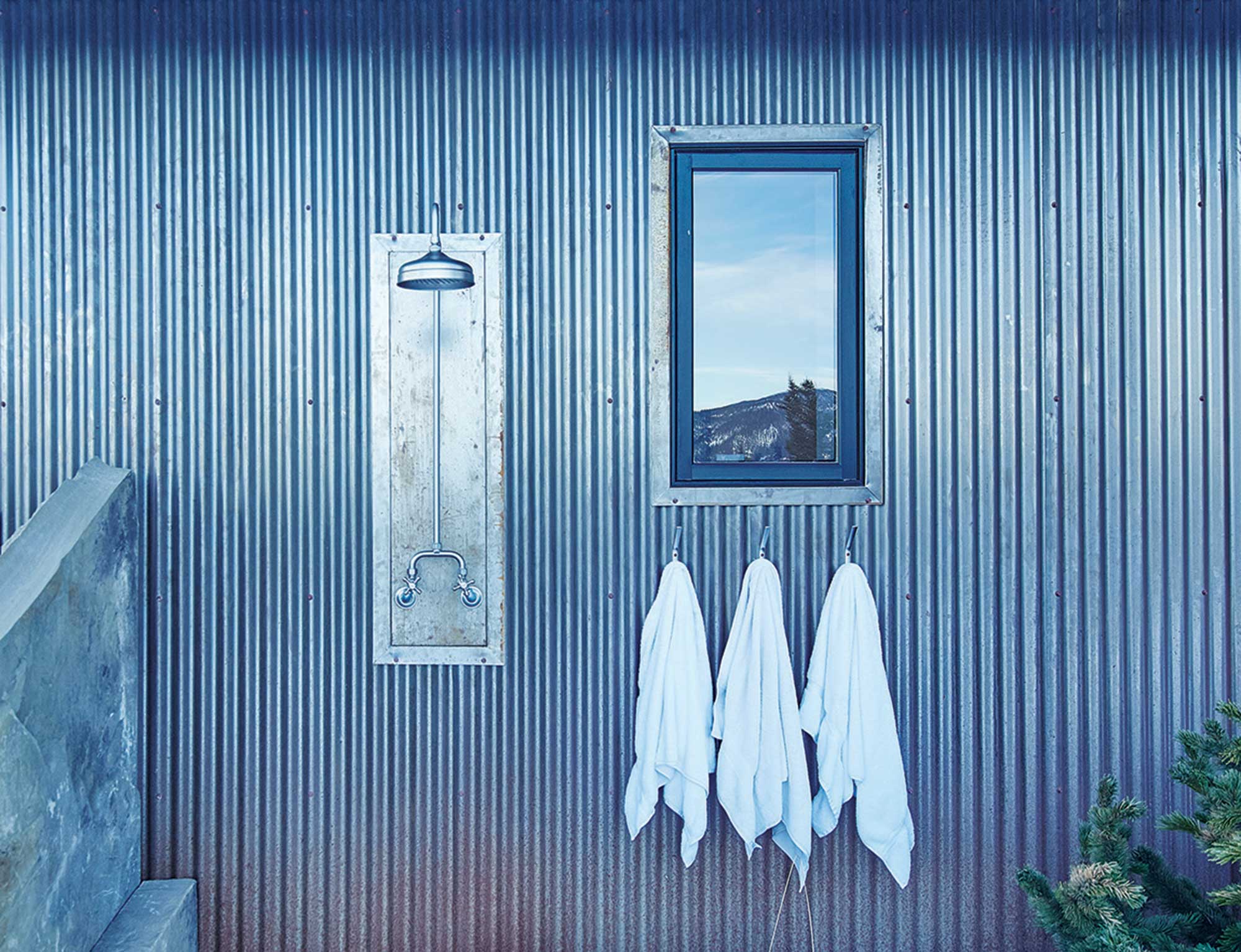 An outdoor shower is a nice amenity for summer days. 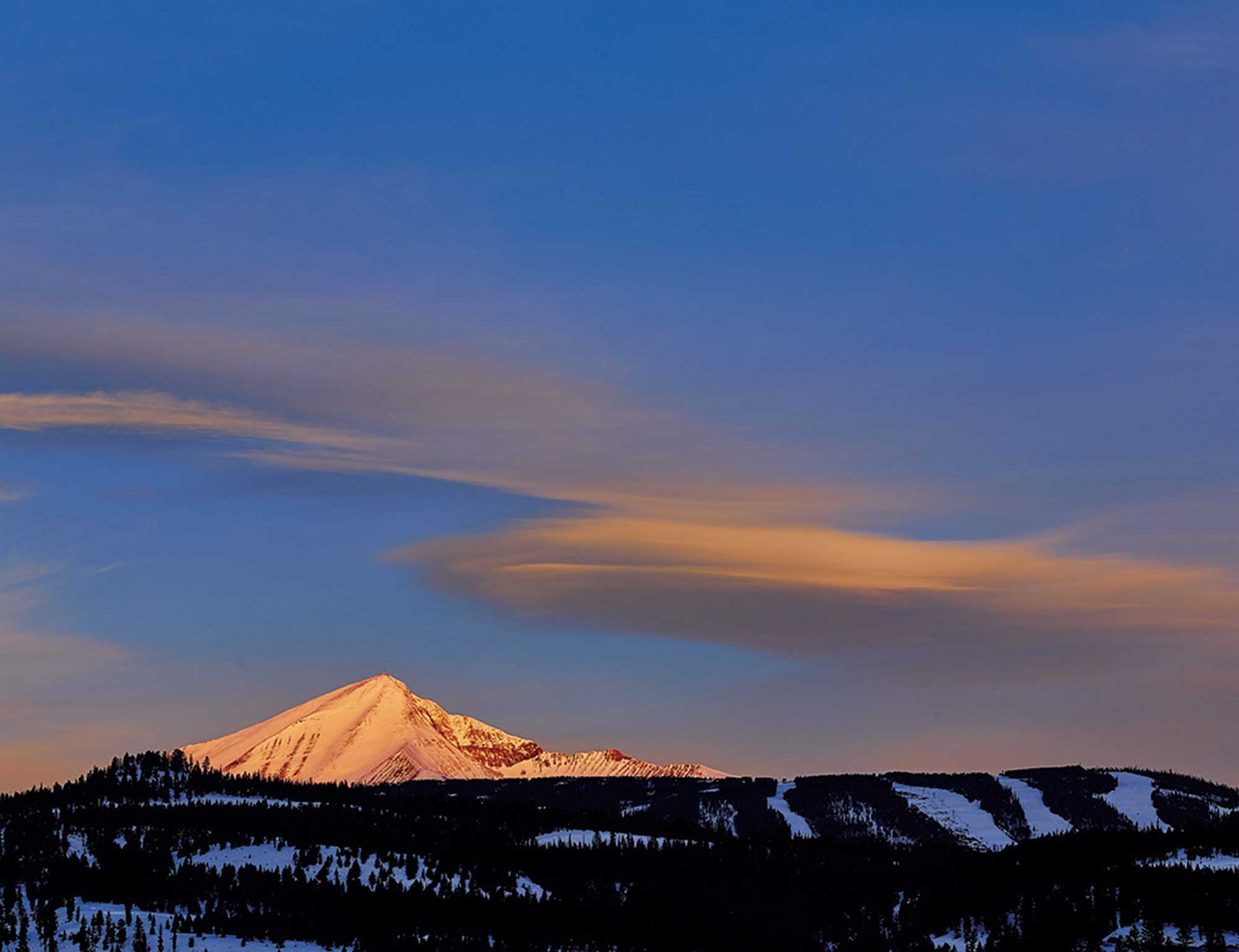 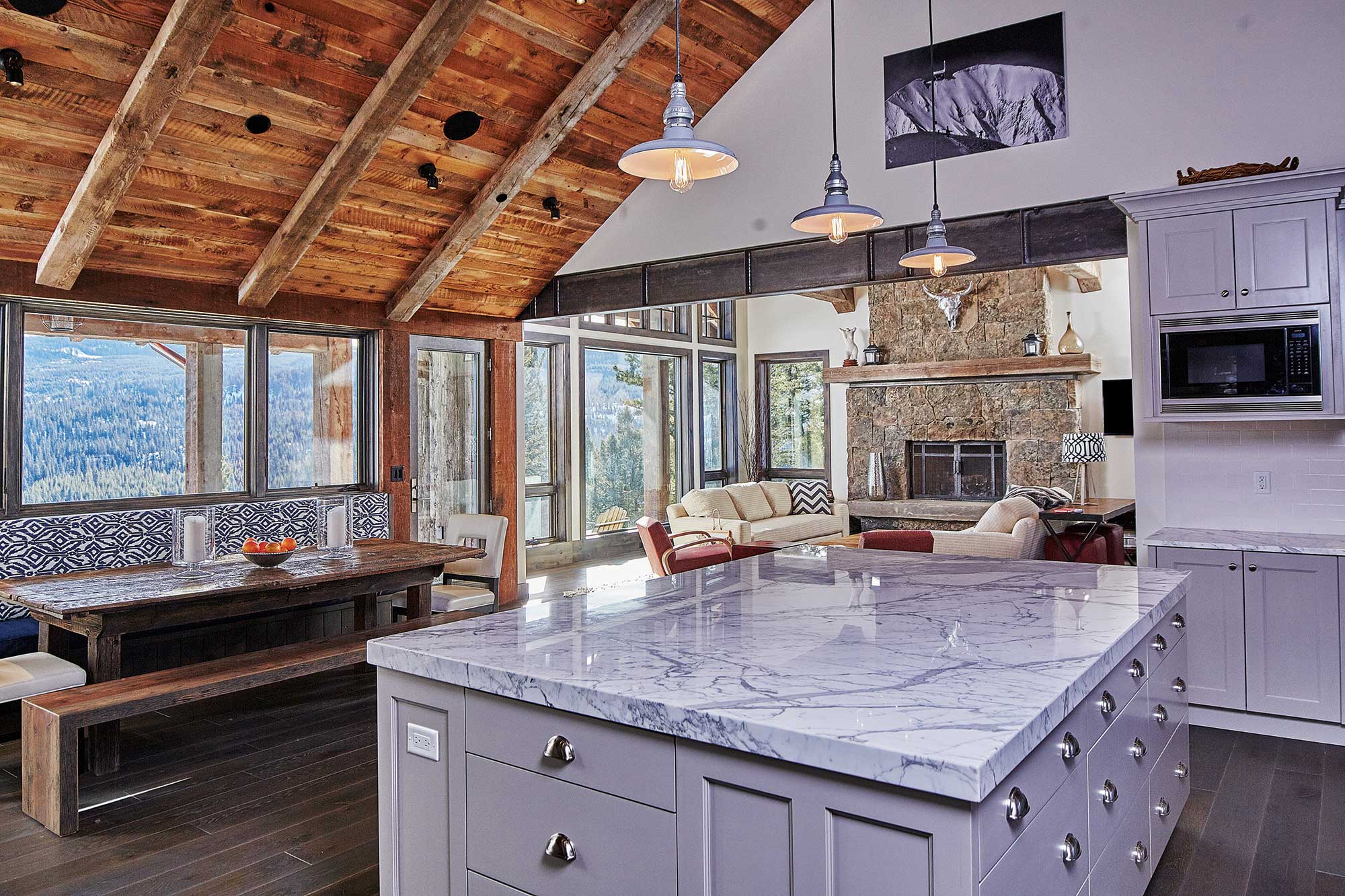 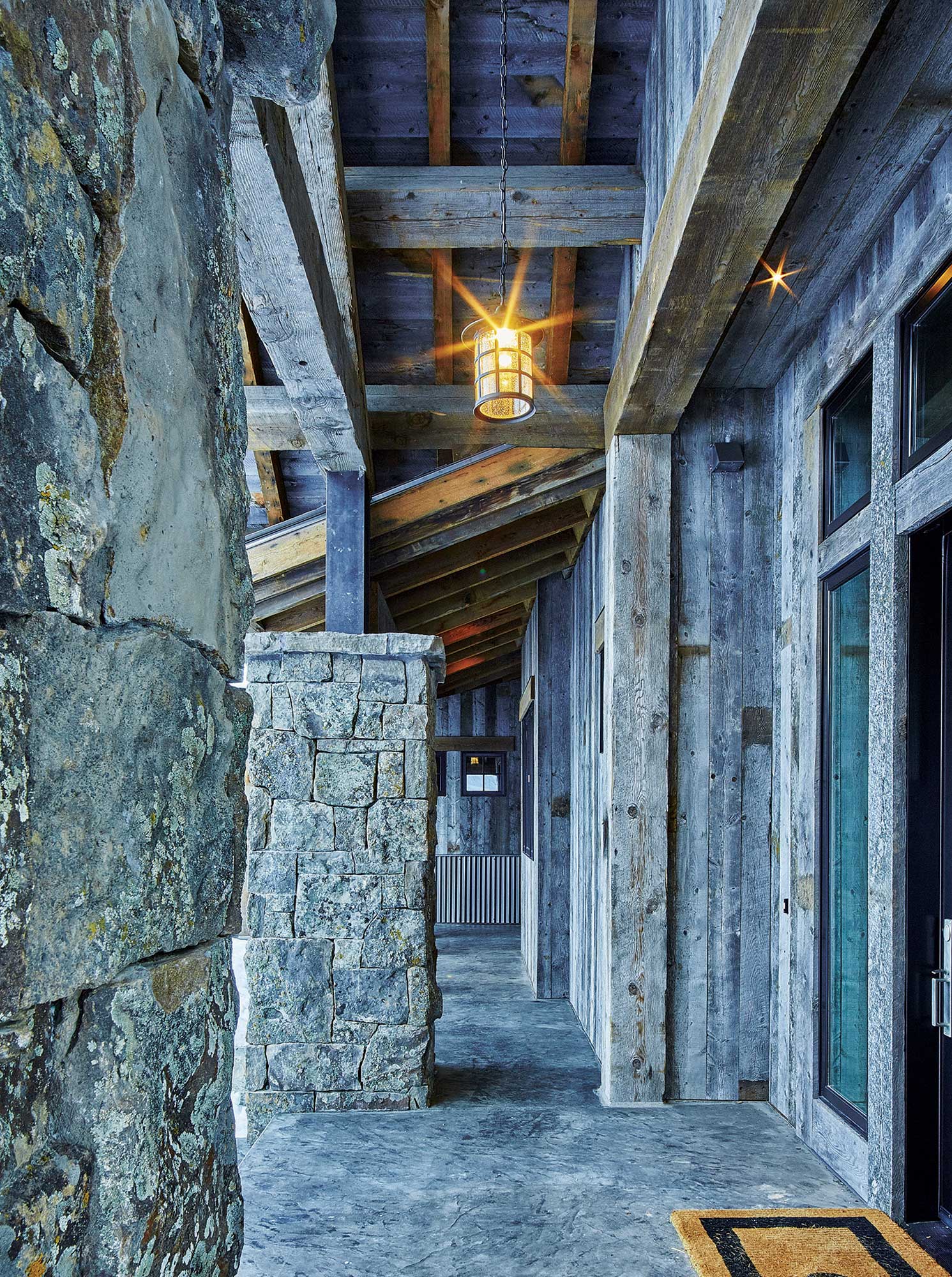 The exterior is a blend of stone, reclaimed lumber, and steel, fitting organically into the natural surroundings. 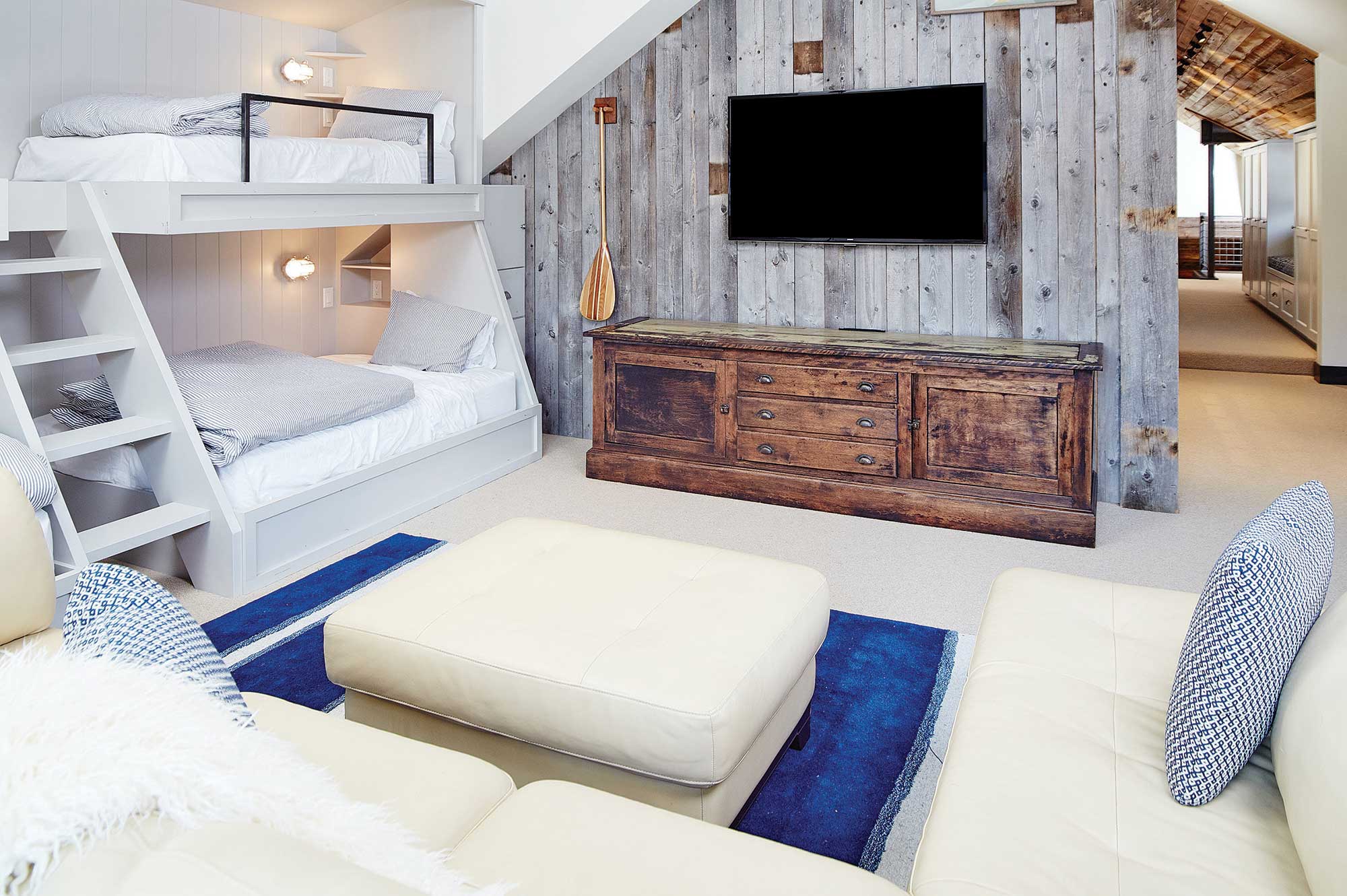 Guest quarters are tucked away upstairs, where a bunk room doubles as a family room. 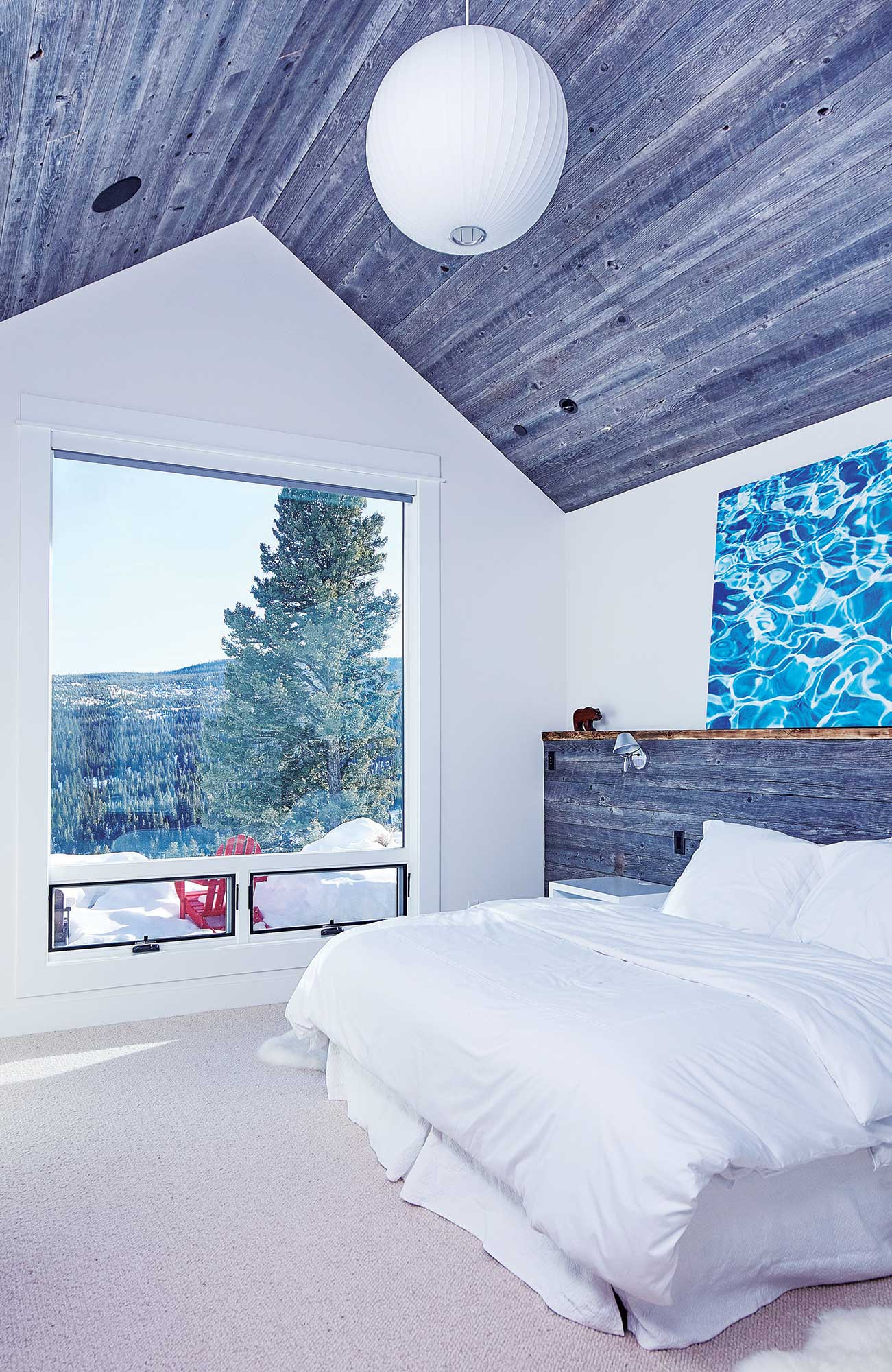 The hot tub sits out back, perched on a hill overlooking the Ousel Falls trailhead. 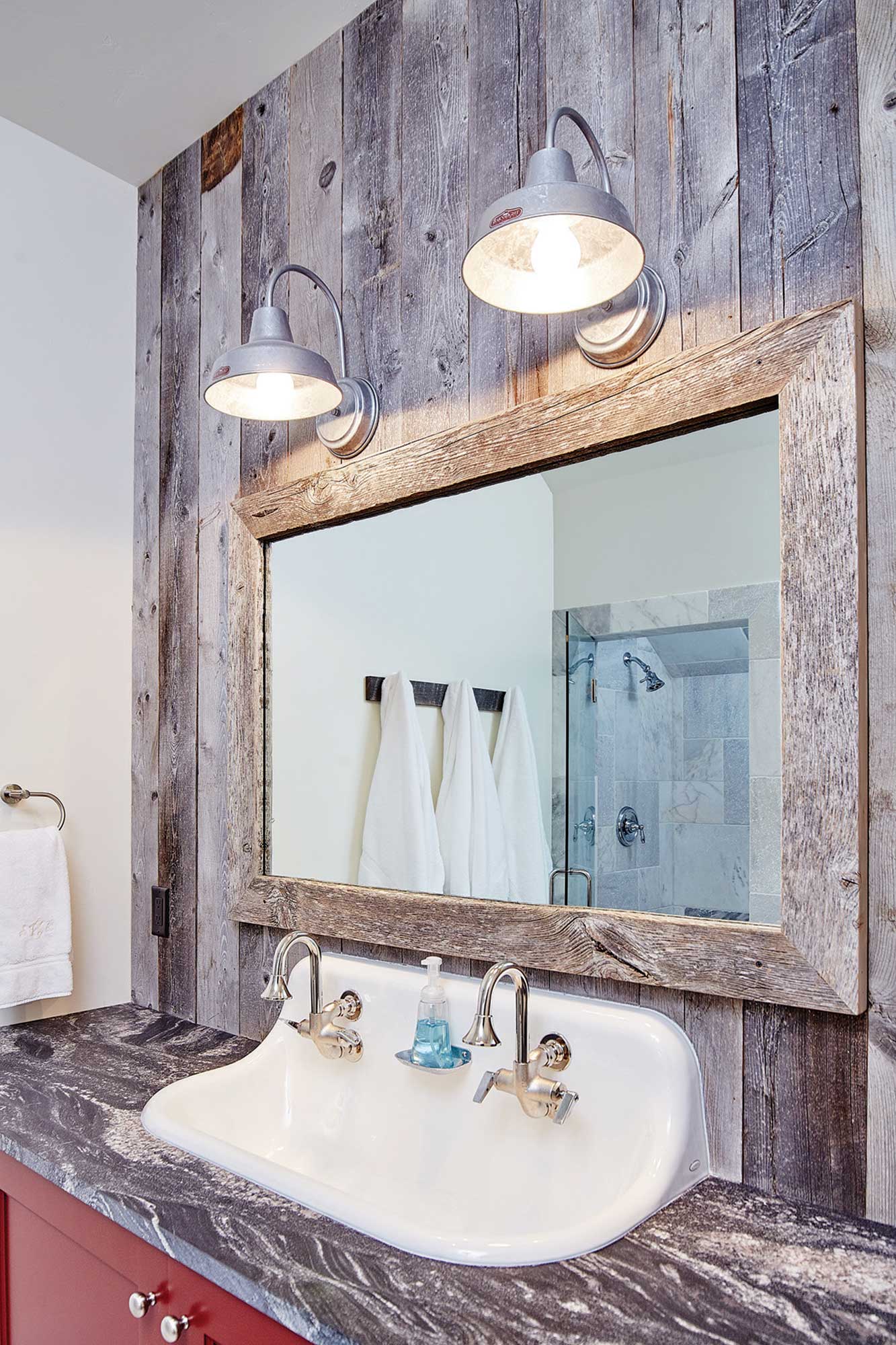 The bathrooms hold onto the rustic charm, complemented by modern industrial fixtures.