24 Aug In Pursuit of Adventure… and Shimmery Fish

I’LL JUST COME RIGHT OUT AND SAY IT: I don’t get out fishing that much these days. Oh sure, I’ll take my 6-year-old son out a few times during the summer and if I’m lucky I’ll cast a line during a few of our weekend family camping excursions, but the lazy days of spending hours on the river searching for fish are few and far between. However, each September, when the summer starts to fade and the busy tourist town I live in finally slows down, I manage to sneak in some sort of fly-fishing adventure.

Three years ago it was a late fall float down the Smith. The year after it was a four-day backpacking trip into the Beartooths. Last fall, I was itching for something different, more off the beaten path. After a few hours of research, several calls to area ranger stations and a healthy ingestion of seasonal microbrews, I settled on a three-day backpacking trip into the heart of the West Pioneer Mountains, just southwest of Wise River, Mont. The mission was to seek out several of the backcountry lakes that contain some of the only remaining Arctic grayling in the continental United States.

I have been infatuated with Arctic grayling since I caught my first one in Deer Lake, just north of where I live in Big Sky, on another backpacking trip several years ago. The shimmery blue of the dorsal fin captivated me, and best of all, they were easy to catch. The fish in Deer Lake — like many of the lakes Arctic grayling inhabit — were introduced. The grayling is listed as a species of special concern in the U.S. and is classified as being high risk because of limited and rapidly declining numbers, range and habitat.

Montana’s fabled Big Hole River is home to the last genetically pure, river-dwelling grayling in the Lower 48. According to Montana Fish, Wildlife and Parks, grayling were originally found in the Missouri river drainage as far downstream as Great Falls. In 1805, Lewis and Clark made note of these “new kind of white or silvery trout” during their landmark journey west. In O’Dell and Bobcat Lakes, native Montana grayling from Red Rocks Lake were introduced several years ago and are only slightly genetically different from the fluvial grayling found in the Big Hole.

After coercing two friends to tag along, we loaded up our packs and hit the road on a beautiful September weekend. Although the three of us had caught grayling before, the excitement of our pending adventure was real, just like Lewis and Clark. We planned on roughing it, as they say, carrying not much else besides the four-piece, lightweight fly rods, down sleeping bags and whiskey in plastic bottles in our comfortable (but heavy) backpacks.

After consulting various guidebooks and topographic maps, we settled on a 15-mile loop hike that started from the Lacy Creek trailhead, about four miles west of the Wise River Scenic Byway. We planned our first night for Bobcat Lakes and then we would head south and west, checking out the numerous lakes that fill the forested basins of the West Pioneers. Vastly different than their eastern counterparts, these are gently sloping, heavily timbered mountains that barely reach 9,000 feet. A well-used trail network — including some that allow motorized use — links several creek drainages, making it easy to choose your own adventure. To avoid a shuttle, we chose to end up at the same trailhead where we started. (More on that later.)

The well-marked, 4-mile trail to Bobcat Lakes climbs about 1,600 feet up to lower Bobcat Lake, a pretty good grind for a couple of out-of-shape, middle-aged guys, each with two kids at home. We arrived in a slight drizzle, but we could see fish rising in the lake and immediately broke out our fly rods. As we fanned out along the wooded shoreline, it wasn’t 10 minutes before we caught our first grayling. And then another, and another. Within an hour we had each caught several, my friend Jason reeling in one that was easily 16 inches. Anything big and bright seemed to work, especially hoppers. The fish were beautiful, just like I remembered, and as the rain subsided, we quickly set up camp at the east end of the lake.

After a mediocre dinner of just-add-water food, we sat around the campfire until the rain returned and drove us into our tents. The next morning was chilly, and since we caught plenty of fish the evening before, we decided to hit the trail after a quick breakfast. A short but steep hike leads to the middle Bobcat Lake, which is a rocky tarn sitting below the rounded summit of Bobcat Mountain. It is a beautiful lake, but didn’t look “fishy” enough so we kept hiking after snapping a few photos. Another quarter mile up the trail is South Bobcat Lake, smaller but no less pretty. Again, we opted to not fish, as we had our sights set on a few of the other lakes and the summit of the mountain above us.

From the south lake, the trail switchbacks up to a saddle separating the Bobcat Creek and Pattengail Creek drainages. From here, an easy 20-minute walk leads to the top of the 9,165-foot peak — marked by a massive, hand-built rock cairn — where a 360-degree view of this isolated country is the reward. From here we could also make out Grassy Lake, situated in a wide, grassy meadow 1,500 feet below us to the west, as well as the Big Hole Valley and the southern end of the Bitterroot Range stretching out in the distance.

After pausing in the meadow to admire Grassy Lake, we kept on and came to another junction with trails leading to Pattengail Creek, Baldy Lake and Sand Lake. Staying on the main trail another half mile brought us to beautiful Schwinegar Lake, then to Lake of the Woods, where we could immediately see fish rising. Perfect stop for lunch, we thought, so we might as well fish. The three of us fanned out and it wasn’t long before we were all hooking fish — big, beautiful Westslope cutthroats that were hungry and easy to catch. This was a surprise to us, as we weren’t even thinking about catching trout, but this session ended up being the best of the trip from a pure fishing standpoint. The trout attacked the flies and hit them harder than the grayling and provided more of an entertaining fight. We each caught at least a dozen and it was hard to leave that spot, but it was getting late in the day and we were intent on making it to our intended camp at O’Dell Lake.

We arrived at O’Dell just as the sun was starting to go down. This was the largest lake we found on our journey, and we found a perfect campsite near the south end, built a fire and enjoyed a perfectly clear night under the stars.

The morning was chilly and filled with bright sunshine. Since it was our last day we were all anxious to catch a few more fish before we packed out. I waded out through the lily pads into waist-deep water and hooked a few grayling. Jason found a nice rock outcropping and hooked some as well, while Craig snapped photos in perfect light.

As much as we wanted to stay another night, we needed to pack up to make the estimated 6 miles back to the cars at Lacy Creek. The plan was to take the Skull Creek trail back, but little did we know that this trail has been more or less abandoned by the Forest Service. We managed to find the junction, but the trail was barely visible and covered with downed branches. Since the other trail led to the O’Dell Creek trailhead, we had no choice but to follow Skull Creek if we wanted to get back to where we were parked. Those last 4 miles were an exercise in route finding, at times the trail completely disappearing into thick, wooded terrain. The only saving grace was a few faded trail markers on the trees, where it looked like some hearty hunters used the trail while searching for elk in the fall.

The cold beers we had stashed in the rigs at the trailhead tasted mighty fine after the arduous walk out. Later, the soak in nearby Elkhorn Hot Springs felt even better. Good thing we got out when we did, we all thought. As we relaxed in the hot springs, completely satisfied with our three-day search for grayling, we couldn’t help but think about next year’s fishing adventure. Having hiked through the center of the West Pioneers, we all agreed that it was worthy of another trip. It’s spectacular, unassuming country that is off the beaten path and slightly adventurous — we only saw one other person in three days. And, best of all, there’s plenty of fish to go around. 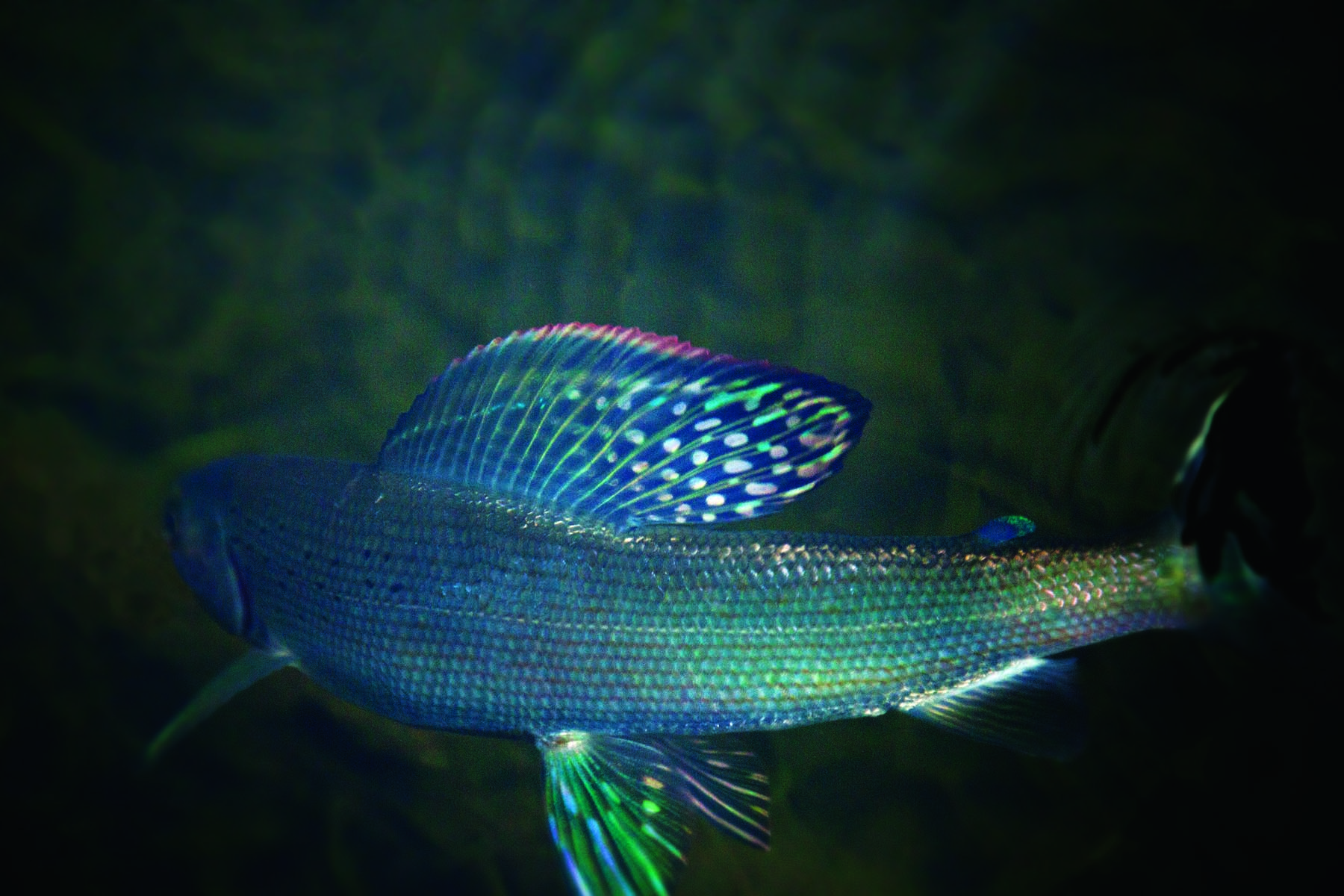 Arctic grayling were introduced to these alpine lakes and they make for an easy catch.

Looking down on South Bobcat Lake, the Bobcat Creek drainage and the East Pioneers from just below the summit of Bobcat Mountain.

The author fishes for grayling in O’Dell Lake among the lilly pads.