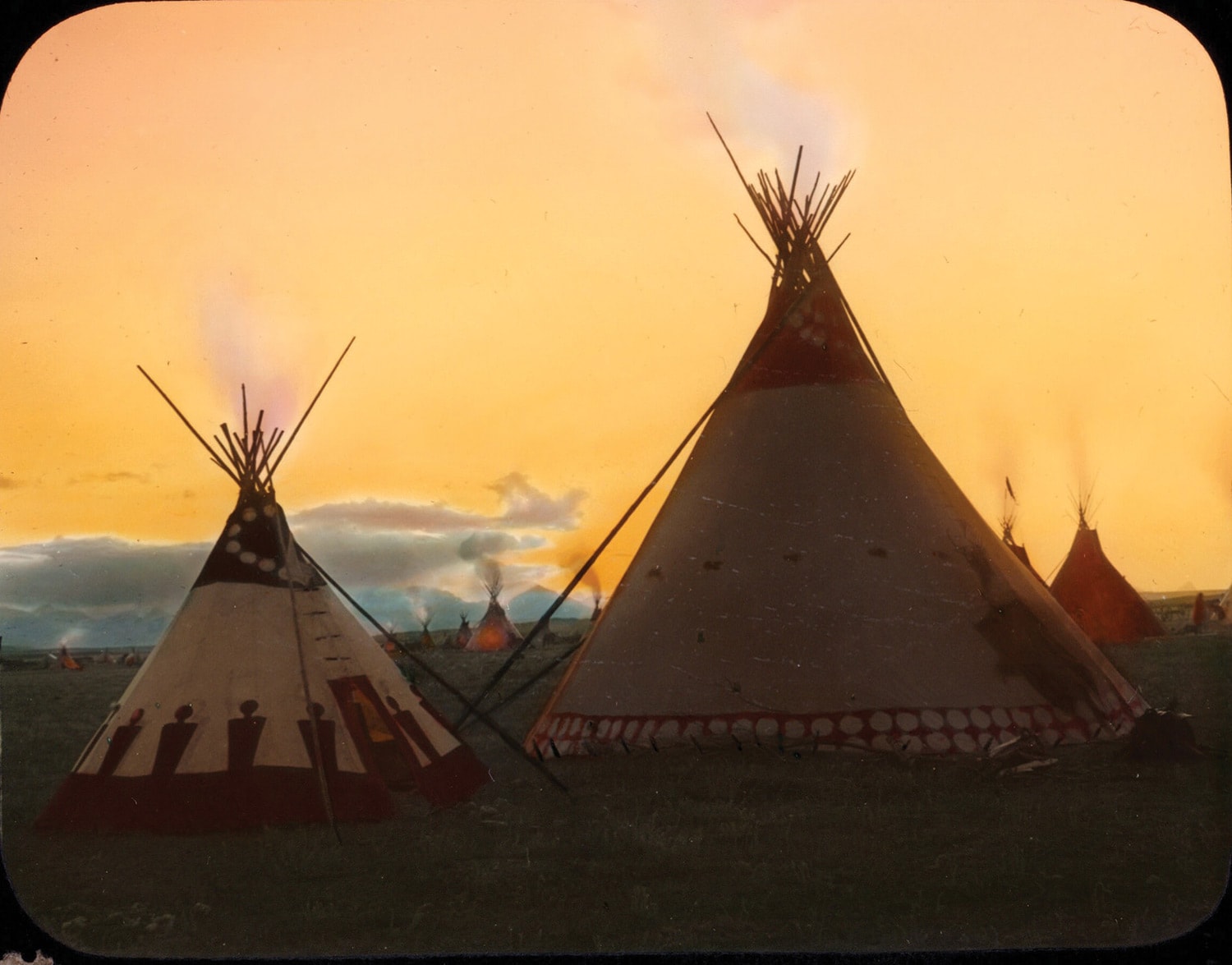 08 Feb Images of the West: A View from the East

The story of early photography in the West is largely (and necessarily) a history of outsiders looking in. It’s a story about preexisting biases and seeing what we want to see. The educated and affluent capturing a moment in time to show it to the folks back home. There’s probably something in there about the allure of capitalism as well. The ambition to score a gallery show, secure an appointment. Maybe find a bit of redemption along the way. 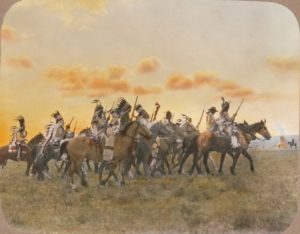 McClintock was determined to portray the romance of his subjects, as embodied by this lantern slide “Blackfeet Indians on Horseback.” Walter McClintock Lantern Slides © Yale University. All rights reserved. Im age ID : 1044600

Walter McClintock is a complicated case in point. Largely forgotten now, not quite out of the public eye, his legacy is best preserved in a single large volume, Lanterns on the Prairie: The Blackfeet Photographs of Walter McClintock, edited by Steven L. Grafe. McClintock’s life, career, and identity, as pointed out in this volume, were built almost entirely on the time he spent with Montana’s Blackfeet tribe in the late 19th and early 20th centuries. With an eye toward producing an opera, he created wax Graphophone recordings of tribal songs, prayers, and speeches. He shot thousands of photos, but always in anticipation of using them on the lecture circuit. Like George Bird Grinnell, he was adopted by the Blackfeet. Unlike Grinnell, however, he never quite managed to reciprocate the favor by championing the tribe’s cause in Washington. Still, and while his motivations were always less than altruistic, he managed to provide a considerable service to posterity. 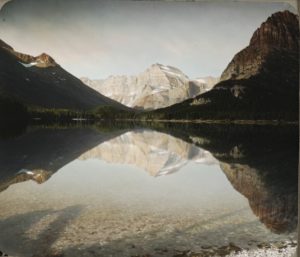 McClintock’s tale in a nutshell: Yale graduate (1891) and a child of relative privilege (family money from Pittsburgh textiles), his first trip west in 1895 was to recover from a bout with typhoid. The next year, he went west again, this time as an associate of a fellow Yalie, Gifford Pinchot, who would later become the first chief of the U.S. Forest Service. Through the course of helping Pinchot conduct a survey on behalf of the National Forest Commission, McClintock learned photography. Toward the end of the trip, McClintock followed his guide, Billy Jackson, to the east side of the Continental Divide. Jackson was a Blackfeet tribal member and fluent in the language, and positioned such that he could introduce McClintock to a handful of important tribal leaders, including a holy man named Siyeh, or Mad Wolf.

This introduction led to what’s been called the signature event in McClintock’s life. In 1898, and after a relatively brief acquaintance, Mad Wolf adopted McClintock, giving him the name White Weasel Moccasin. McClintock describes the episode at length in his immodestly-titled first book, The Old North Trail: Life, Legends, and Religion of the Blackfeet Indians (1910). Historian Dan Flores, in an article written for Big Sky Journal in 2001, said that The Old North Trail “was and has remained a remarkable bit of amateur ethnography, rich with Blackfeet stories, ceremonies, settings and personalities…” In that book, Mad Wolf is quoted as saying: 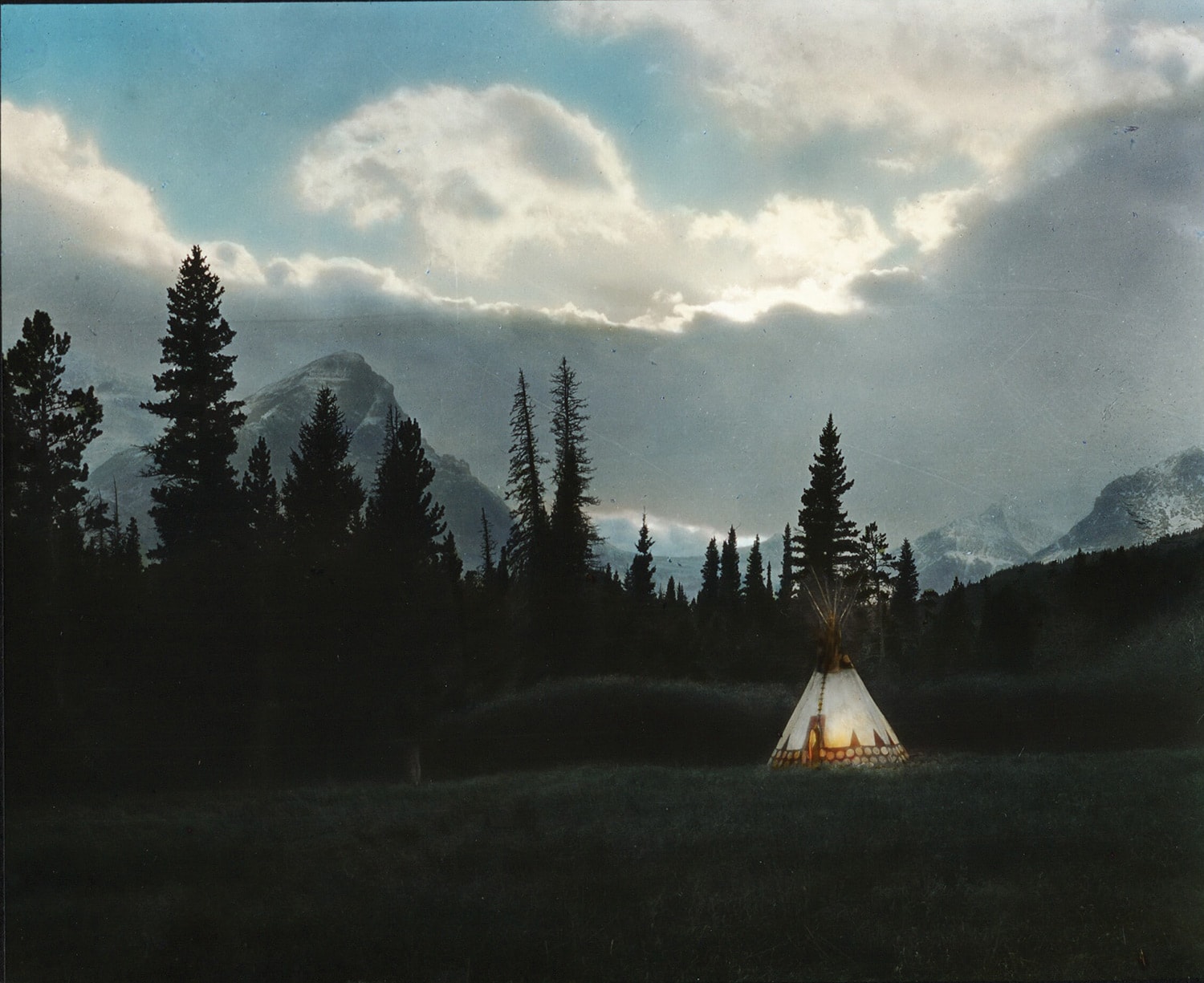 Hand-tinted by an artist in Chicago from notes that McClintock took on site, it’s unclear how accurate the colorist’s interpretations of these images might have been. This image was entitled, “Tipi Glowing with Light from its Inside Fire.”

I have never taken a son from among the white men, but I now wish to adopt you as my son, because I believe that some day you will become a chief among your people. I am growing old, and it is probable that I will go before you to dwell with the Great Spirit, for you are still a young man. When I am gone you will then be left to help and to advise my people. 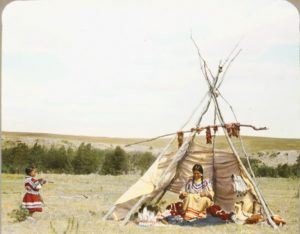 McClintock’s images, while biased toward a romantic vision, nevertheless provided glimpses into the daily life of his subjects, as in this image, “Blackfeet Woman at Work under a Sun-Shelter with a Child Nearby.” | Walter McClintock Lantern Slides © Yale University. All rights reserved. Im age ID : 1044576

There wasn’t much help forthcoming, not much advising, but McClintock’s adoption, and the trust that accompanied it, allowed him rare access to the daily life of the Blackfeet. Between 1903 and 1912, he made seven summer visits, and created more than 2,000 photographs. He provided a selection of these as negatives to a Chicago slide colorist, Charlotte Pinkerton, who, using notes McClintock had made onsite, created a series of lantern slides. These were meant to accompany McClintock’s lectures, and were something like the PowerPoint of the age. For a public speaker intent on drawing as many people as possible into his auditoriums, they must have been a near necessity. Come see the magic lantern projections, hear stories about the Blackfeet.

During the course of his career, McClintock presented talks to Theodore Roosevelt and William Howard Taft. He gave an illustrated lecture to the crown prince of Prussia and a well-received talk to the Berlin Anthropological Society. Between late January and March 1913 alone, he spoke in 36 different venues. Most every lecture focused on his early trips to Montana. 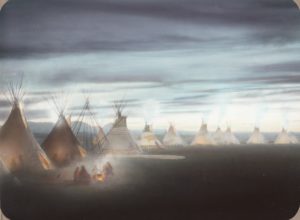 Although he came to call himself an ethnographer, it’s fair to say, as others have said before me, that he was devoted less to studying the Blackfeet and more to his own romanticized ideal of them. He took photos of what he wanted to see, and what he believed other people might want to see. His images are heavy on traditional garb, leather, and beads, but light on the cotton and cowboy hats that tribal members increasingly favored. He made sure to capture traditional labor, but avoided ranching and farming. As historian William Farr notes, “Blackfeet stock efforts and the presence of more than four hundred wagons, more than five hundred sets of harnesses, and some one hundred mowing machines for a population of fewer than two thousand simply were not what he was looking for nor of any particular interest to him.” Rather, as Farr continues, McClintock was “curious about what he could still find of the fabled American West before the last remnants of it had slipped away.”

His lantern slides in particular, colored by Pinkerton and now housed at Yale’s Beinecke Library, are perhaps best when taken slightly out of context. Slide after slide shows us idyllic sunsets, the haze of campfire smoke, and, of course, the glow 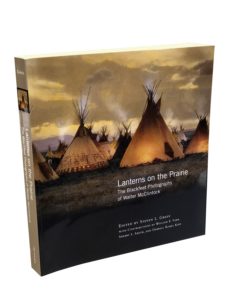 of fires within teepee after teepee. Edenic views of a time not only well past, but one that perhaps never quite existed in the first place. In that regard, and even if McClintock’s images were compromised by romantic aspirations, they remain remarkable. The trick is to take them for what they are. They are not so much reference materials as pieces of art.

An outsider standing apart but looking in … and seeing beauty.