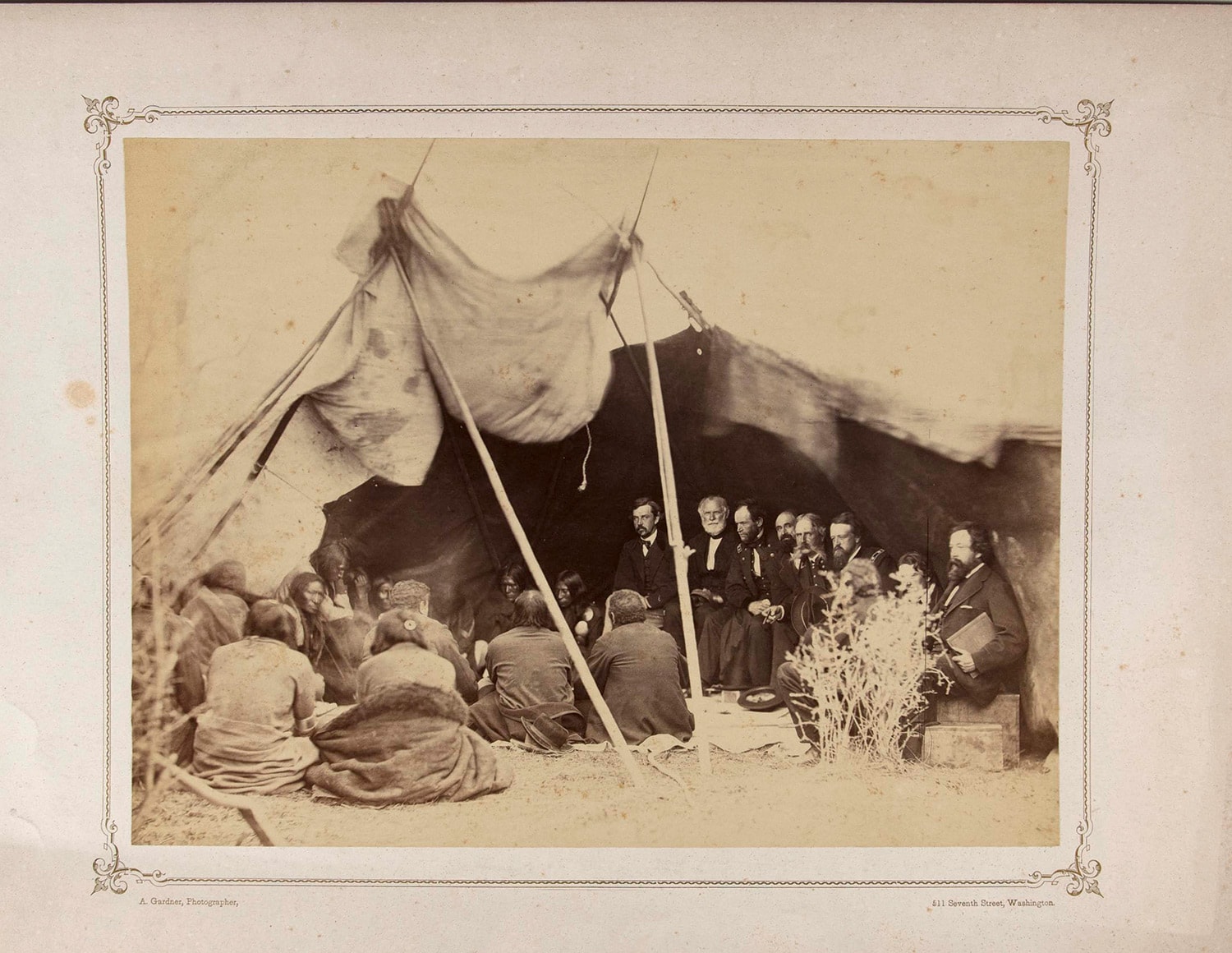 Indian Peace Commissioners in Council with the Arapahoe and Cheyenne, Fort Laramie, 1868 | On Loan from The Brinton Museum Endowment Fund AG/1310 L2015.24.573

in Images of the West | Arts 2018 | Written By: Toby Thompson | Photographs Courtesy of The Brinton Museum Posted at 05:12h 0 Comments
Share

He was long-haired, full-bearded, and could have been a veteran of the 1960s. He’d been a champion of socialist causes, a chronicler of war yet an advocate for peace, a witness to the execution of presidential assassins and a restless patriot, an artist discarding old forms for experimentation with new technology, a counterculture journalist and commune founder, a champion of Native Americans as first citizens, and a proponent of life insurance as a kind of social welfare. Yet Alexander Gardner’s decade of greatest productivity was the 1860s — a full century before such values became fashionable. 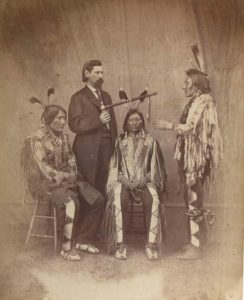 This fall, an exhibit of his American Indian photographs will be on display at the Brinton Museum in Big Horn, Wyoming, in celebration of the 150th anniversary of the Fort Laramie peace talks. It will include 27 of the 60-odd photographs Gardner took on the occasion, in 1868, of talks between a federally appointed commission of generals, politicians, and Plains Indian leaders. There are gripping images of Native American chieftains, U.S. dignitaries, and the Wyoming landscape in which they stand. Above all, they show the mastery Gardner acquired from decades of practicing portrait photography.

Born in Scotland in 1821, Gardner apprenticed first as a jeweler but became intrigued by journalism and the new craft of photography; Louis Daguerre had developed his daguerreotype photographic process only in 1837. Philosophically, Gardner was influenced by the writings of Robert Owen, a Welsh socialist and communard. From Owen’s example, Gardner and his friends bought land in Iowa for a cooperative, but the first settlers’ contraction of tuberculosis prevented Gardner from living there. He returned to Scotland, founded a radically democratic journal, The Glasgow Sentinel, and took up photography. At London’s Great Exhibition of 1851, Gardner saw the work of American photographer Mathew Brady, and by 1856 had become an assistant at Brady’s gallery in New York City, where he photographed military officers, politicians, and social luminaries. By 1858, Gardner and his younger brother James were selected to run Brady’s Washington, D.C., gallery. 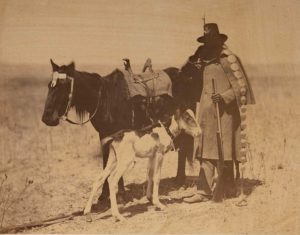 When Abraham Lincoln was elected president, Brady photographed him at the White House and in the field at least seven times. War was declared in 1861, and Gardner — ever open to adventure — secured an honorary captaincy to serve as photographer to U.S. General George B. McClellan. He became so trusted in Washington, D.C., that after Lincoln’s assassination he was the only person invited to photograph the conspirators’ hanging. Gardner was familiar with bodies, having photographed the corpses of soldiers at Antietam and Gettysburg. Those battlefield images horrified viewers — Gardner’s intended effect. As he wrote in his publication Gardner’s Photographic Sketchbook of the War, “Such a picture conveys a useful moral: it shows the blank horror and reality of war, in opposition to its pageantry. Here are the dreadful details! Let them aid in preventing such another calamity from falling upon the nation.”

As a socialist, Gardner saw both Yankee and Rebel conscripts as pawns in a game between the privileged. Of course, the original pawns were America’s displaced Native Americans, squeezed to midboard by the populations of both coasts and increasingly threatened by the transcontinental railroad, which crossed their hunting grounds and dispersed bison. Gardner photographed Native American delegations in Washington, D.C., (he was photographer for the Office of Indian Affairs), and in the 2018 Brinton Museum show, there are striking prints of Native Americans posing both at the White House and in regalia during more formal studio sessions. 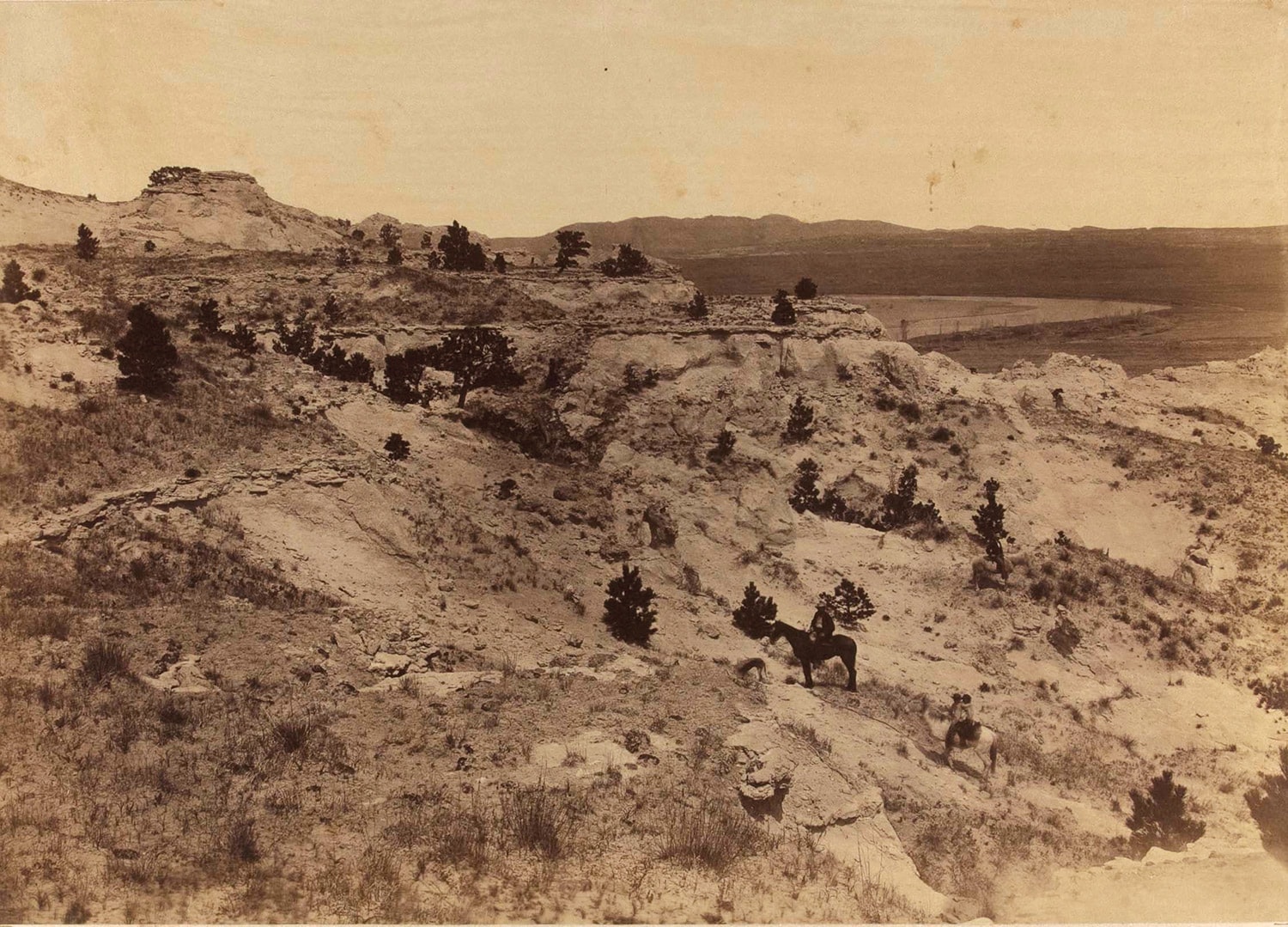 But by this time, Gardner had not yet traveled to Indian country. He would later do so from 1867 to 1868 as a survey photographer for the Union Pacific Railway (later the Kansas Pacific), becoming one of the first photographers of the American West. He worked in a small, horse-drawn darkroom that is visible in several of his shots. His images of the Southwest would be presented in Across the Continent on the Kansas Pacific Railroad, a book published in 1868, featuring staggering images of railcars atop bridges and against the vastness of the Kansas prairie. In Arizona and New Mexico, he photographed Native Americans on the plains and in their pueblos. But it wasn’t until his Fort Laramie visit that he produced his finest work, photographs that would comprise his Scenes in the Indian Country series.

Of the 27 prints included in the Brinton Museum show, the most dramatic are of Native American chiefs, with names such as Man Afraid of His Horses, Fire Thunder, Shot in the Jaw, Packs His Drum, Whistling Elk, and Pipe. The chiefs appear regal yet defeated in their everyday garb, while the generals, Alfred H. Terry, William T. Sherman, William S. Harney, and Christopher C. Augur, among others, look imperious in dark uniforms or business suits — especially in an image of the group seated beneath a tent fly, with the Native Americans slumped before them. These are not journalistic photographs; they are carefully posed. In one photo of the six generals and an Arapaho woman, Terry and Augur stand angled toward the group, Harney braces at attention facing the camera, Sherman and civilian committee member John B. Sanborn flank the tiny woman, and civilian Samuel E. Tappan stands at ease. Theirs are postures of both indifference and intimidation. 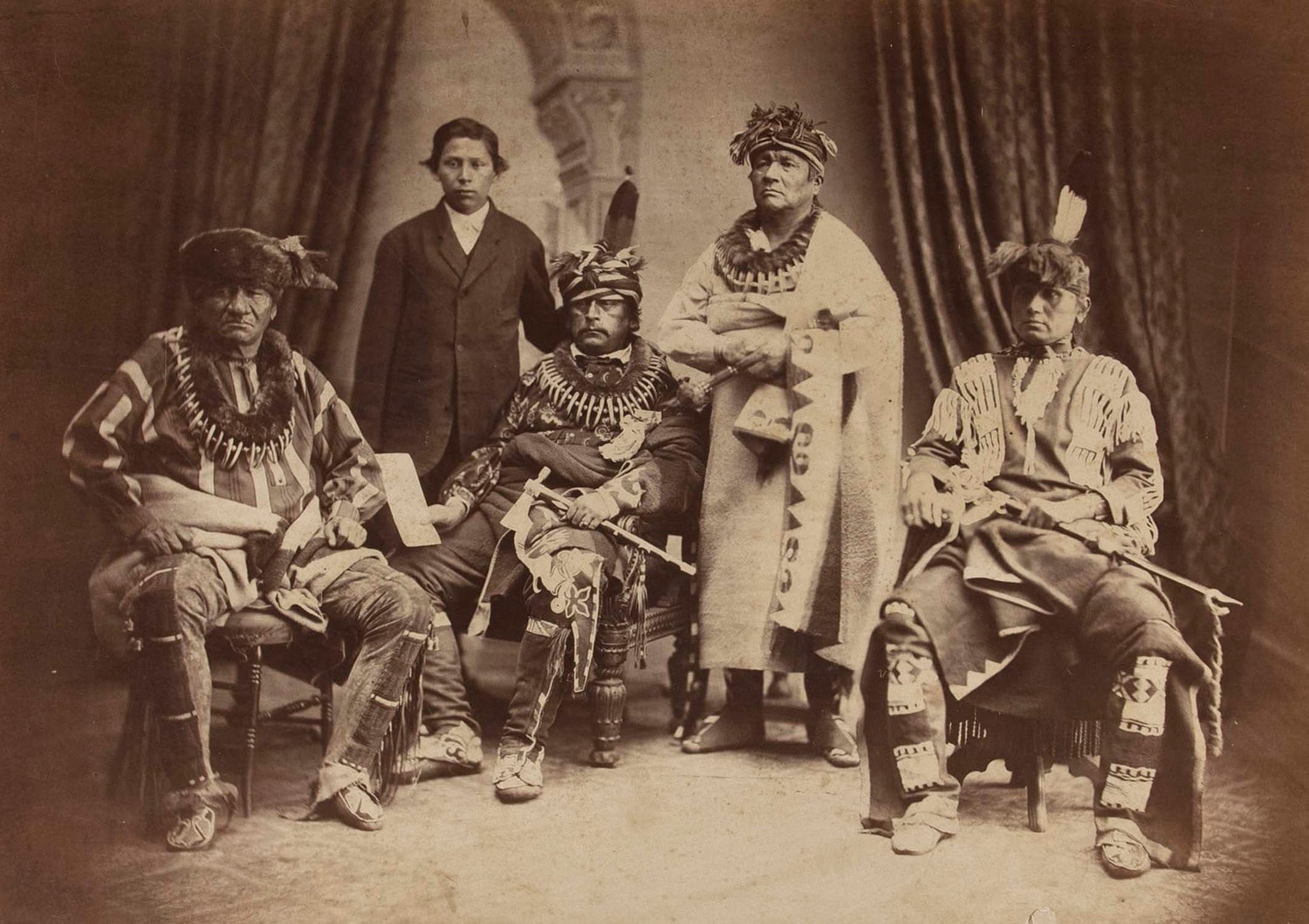 In a photograph titled Plains Indian, Fort Laramie, a tall Native American in a Confederate overcoat — with a strand of silver conchos over his shoulder, an insignia-decorated hat, and a musket — leans against a brindle mare and her white colt. Gardner posed the shot two different ways: one with the colt facing left, and the other facing right; in one the man is hatted, in the other, hatless. Even in landscape shots, such as Bluff on the Platte, Black Hills in Distance, Bluffs on the Laramie River Near Fort Laramie, and Chimney Rock on Plains Between Cheyenne and Fort Laramie, Gardner situates figures across the portrait’s frame in a manner that suggests both scale and human insignificance. Most effectively, Gardner foreshadows the Native Americans’ capitulation with portraits of their burial site — solitary trees near Fort Laramie, with bodies lashed to the branches resembling prairie crucifixes.

As critic Keith F. Davis suggests in Alexander Gardner: The Western Photographs, 1867-1868, a tension existed in Gardner’s work between portraiture and landscapes. “His years in the portrait studio gave him a sophisticated sense of lighting, composition, and pose,” Davis writes. “His experience on the battlefields of Antietam and Gettysburg underscored the power of blunt facts. His work in the American West hovers between these two aesthetic poles, a potent blend of deliberation and contingency, of art and information.” 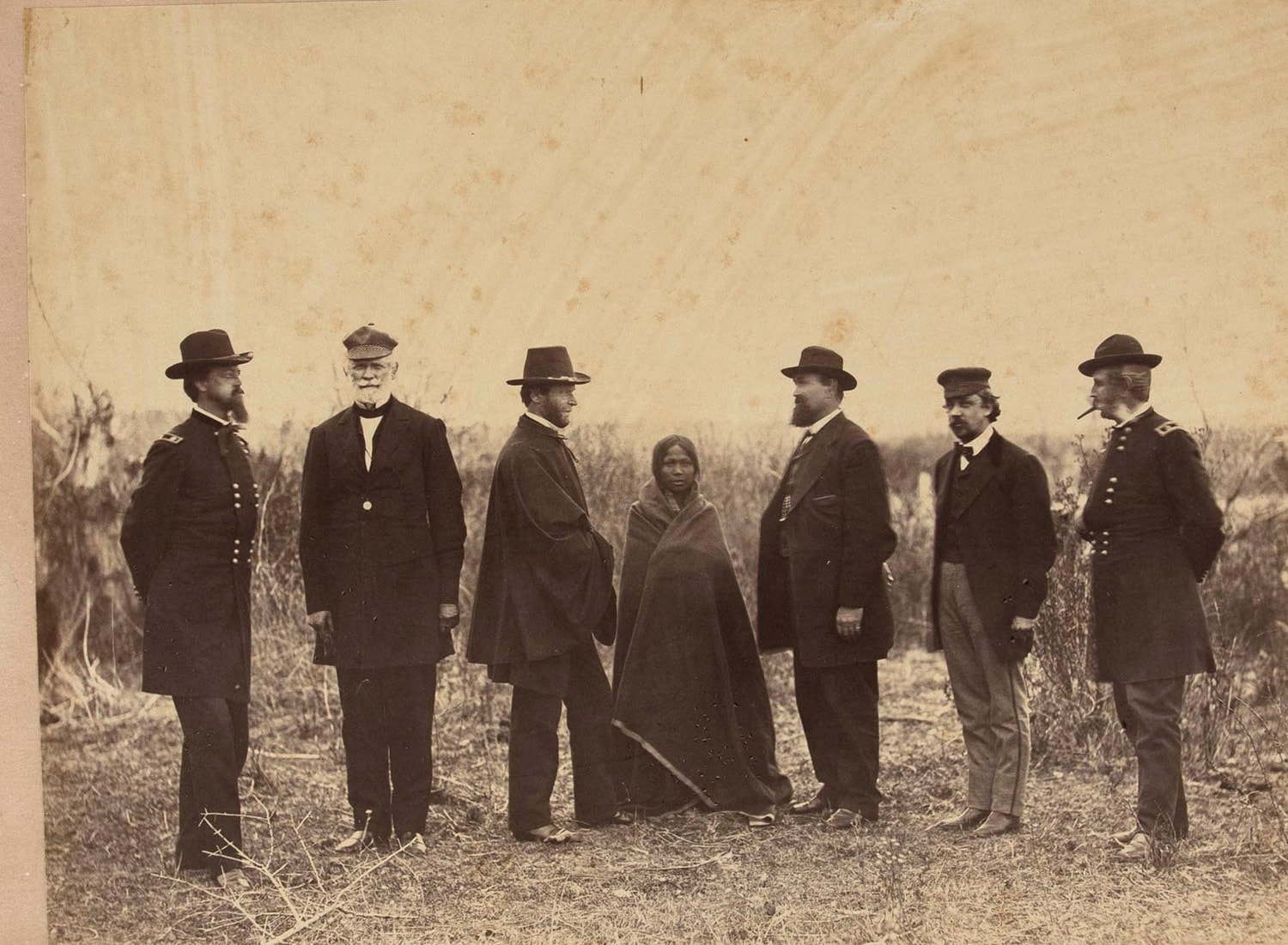 The peace talks that Gardner memorialized closed with modest success. A treaty was signed on April 29, then augmented on May 25, 1868. Eventually it was broken. As Brinton Museum Curator of Exhibitions Barbara McNab writes, “Unfortunately, conflicts over hunting rights and ownership of land were to continue well into the next two decades. The discovery of gold in the Black Hills in 1874 had much to do with the unraveling of the treaty.”

But Gardner’s photographs stand both as a monument to the talks and as works of art. As Davis writes, “Gardner’s photographs seamlessly meld art and history.” This is true of his Civil War photos as well as those of the West. “Our cultural memory of these places and events is shaped powerfully by the fact that these remarkable photographs were made by him,” Davis adds.

Editor’s note: The 150th Anniversary — Treaty of Fort Laramie exhibition at the Brinton Museum in Big Horn, Wyoming, runs from Sept. 2 to Nov. 9.