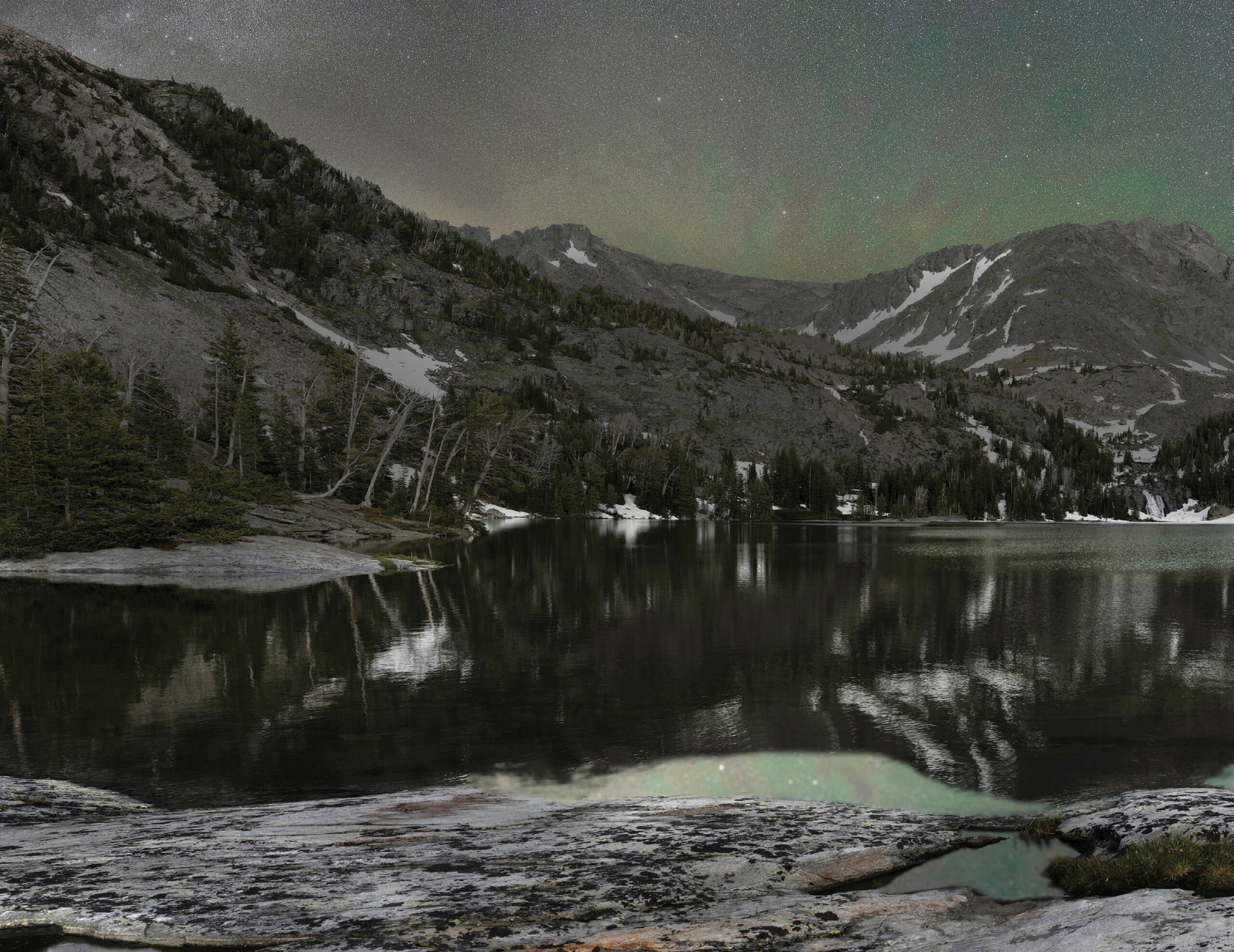 28 Sep Images of the West: Starstruck

in Fall 2021 | Images of the West | Written and Photography by Jake Mosher Posted at 12:10h 0 Comments
Share

A pair of great horned owls have been calling to each other from the other side of the lake for most of the night. I imagine them in playful competition, boasting about who’s caught more voles. As each minute passes, their calls sound closer together. I gaze over the craggy peaks and notice a faint hint of silver on the eastern horizon, the dusting of daylight that’s heading my way. I finished photographing this star-lit scene more than two hours ago, but, like the owls, I’m not ready for sleep. I’ve been sitting quietly on the smooth granite shoreline by my tent ever since. 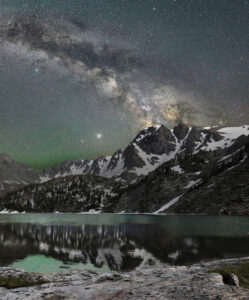 I’ve always loved the land at night and the celestial canopy above. While studying the sky, questions swirl through my mind: How far does it reach? Are we alone? What wonders lie on the opposite edge of the universe? And by photographing it, I feel a connection with those who, over thousands of years, have also looked into the heavens and pondered the same things. 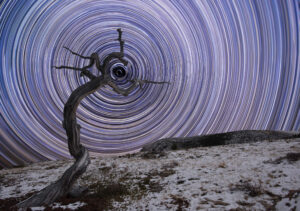 A dead tree cradles the North Star northwest of Choteau, Montana. Ten hours of open shutter produced the star trails in this image.

While I’ve photographed many different elements of nature, the experiences I’ve had capturing the world after dark stand out the most. There was the time I watched a family of raccoons crawl out of the broken window of an abandoned cabin during a 10-hour star-trail shoot on a lonesome prairie near Miles City, Montana. I remember feeling good about the fact that this homestead-era house was being used once again. 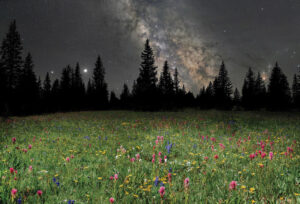 The Milky Way reaches into the sky behind a field of wildflowers in Wyoming’s Big Horn Mountains. For this photograph, the foreground was lit by headlamps that were hanging in a tree behind the camera.

Another time, I watched the bright arc of the Milky Way as it spanned the early-summer sky above a sandstone formation in eastern Montana, thinking about how these same stars hovered over the dinosaurs that lived in this area millions of years ago. 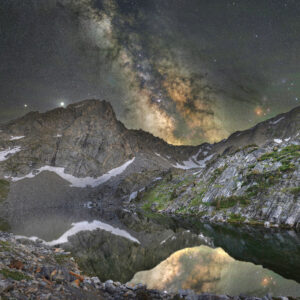 The Milky Way soars above Beehive Lake in Montana’s Spanish Peaks Range. The bright planets visible to the left of the galaxy’s core are Saturn and Jupiter.

When I was photographing in the mountains near Idaho, I watched the moon and Venus kiss good morning as they hovered over a meadow full of wildflowers. Further north, I once stood in the snow-filled Spanish Peaks near Bozeman, Montana, watching the galaxy glow with soft light, bathing the world above and below me in hues of blue. And then there was the time I listened to coyotes howling as if they were singing distant hymns and praising the night while I photographed the Milky Way over an abandoned church near the Canadian border. 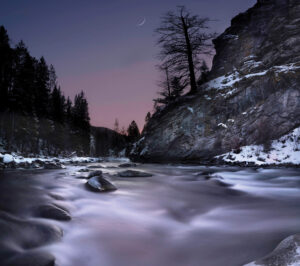 A winter crescent moon hangs in the sky above Montana’s Gallatin River. 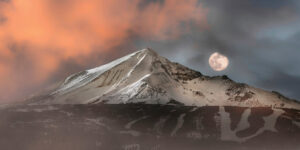 The full moon sets behind Lone Peak in Big Sky, Montana. This image was shot with a telephoto lens from several miles away just as the sun was beginning to rise on the opposite horizon.

During each experience, I find myself awestruck by the beauty of the world after dark. The photos not only preserve a moment in time, but they also chronicle the passing of time: star trails around the equinoxes; full moons during the dead of winter; and parts of our home galaxy at the height of summer. 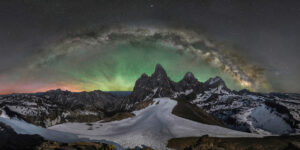 The Milky Way over the Grand Teton was photographed from the top of Table Mountain in Wyoming. 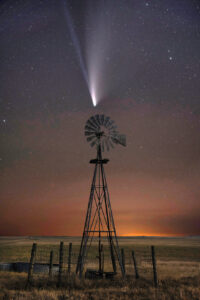 The comet NEOWISE streaks through the sky behind a windmill in Eastern Montana, as the lights from Billings glow on the horizon.

Back on the lakeshore, I finally crawl into my tent and, on the verge of sleep, the images and seasons swirl together in my mind. Right before falling into a deep slumber, I hear the owls call to each other once again. Although the morning light is getting closer, I believe they’re calling to me, saying goodnight.