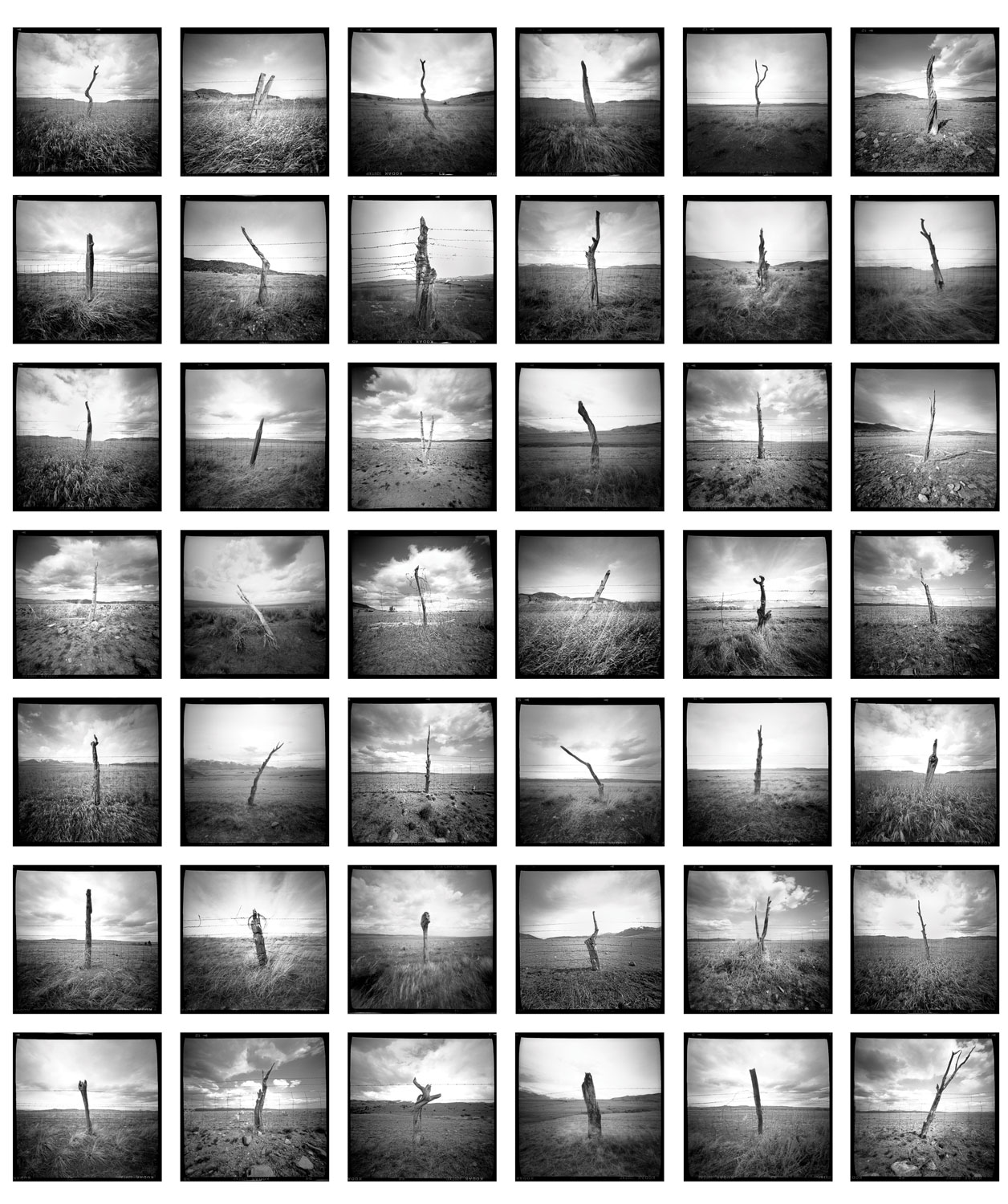 49 posts – photographer tom Ferris made this piece from 49 photographs of cedar and juniper posts that have stood for decades. “they’re slowly being replaced by metal posts,” Ferris says, “and though I realize it’s a more practical approach to fencing, I’m going to miss the character of these when they’re gone.”

in Images of the West | Arts 2019 | Front Page Stories | Photographed and Written by Tom Ferris Posted at 17:10h 0 Comments
Share

These are not your typical roadside attractions, like South Dakota’s Corn Palace, Oregon’s Stumps of Mystery, or Kansas’ World’s Largest Ball of Twine, though I’d like to photograph those one day as well. Instead, these pinhole photographs are the roadside attractions that have been tugging at the corners of my eyes and mind for years, as I buzz down highways and side roads on my way toward one destination or another. 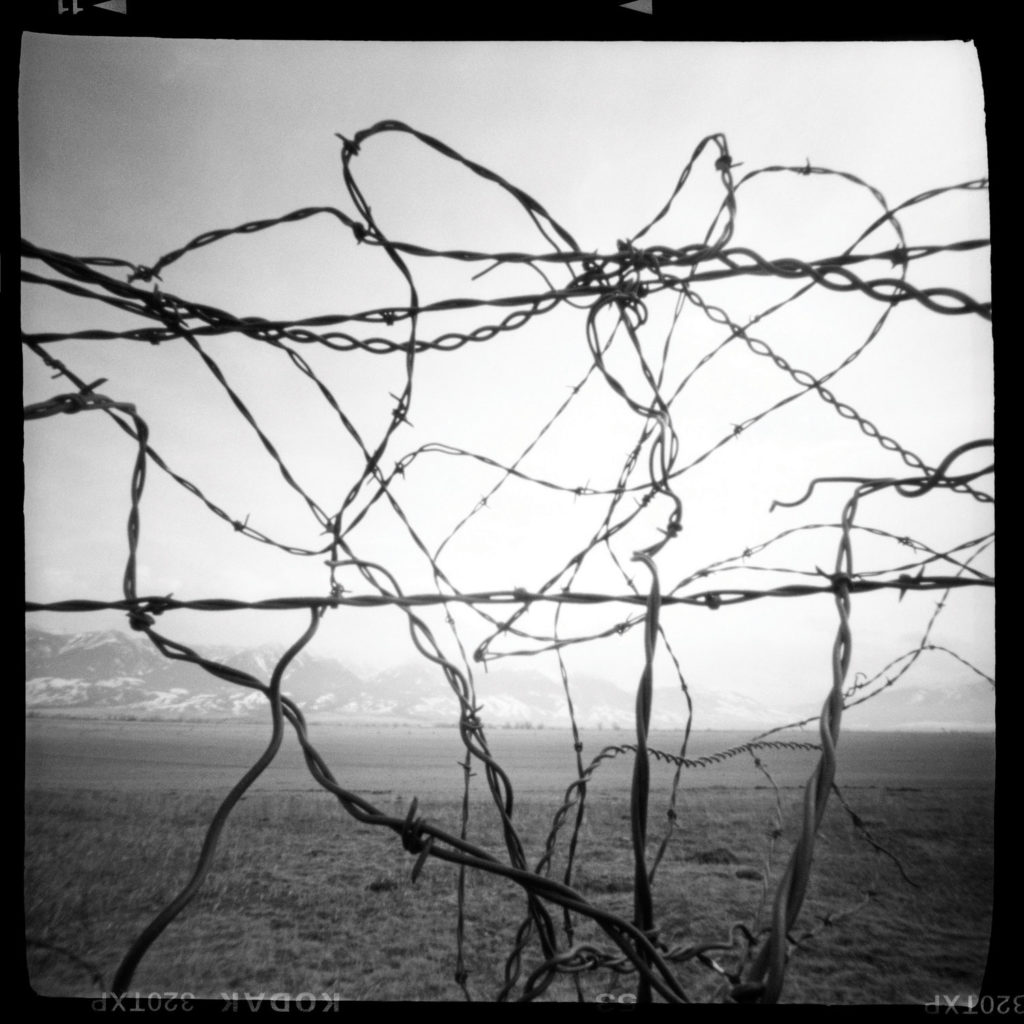 Tangle – “I’m guessing most of us have had days like this,” the photographer says.

The subject matter appeals to my interest in landscape photography, ranch and Western culture, and my appreciation of Mid-Century Modern American art — specifically grids, abstracts, and found objects. Due to my years working in the photo archives at the Montana Historical Society, I also appreciate the nostalgic aspects of the things I’ve photographed, and realize that many will not be around for much longer. Organic decay and weathering adds beauty to man-made objects — even as they break them down. 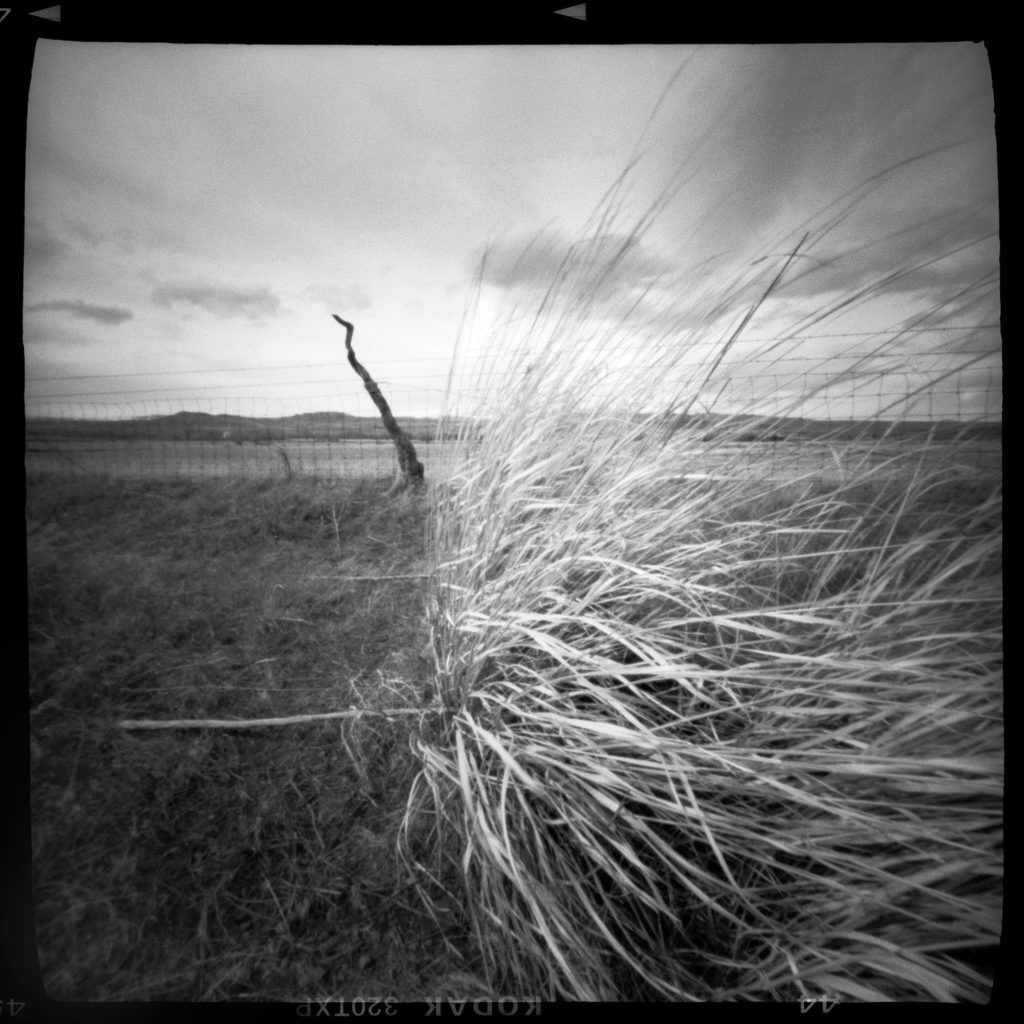 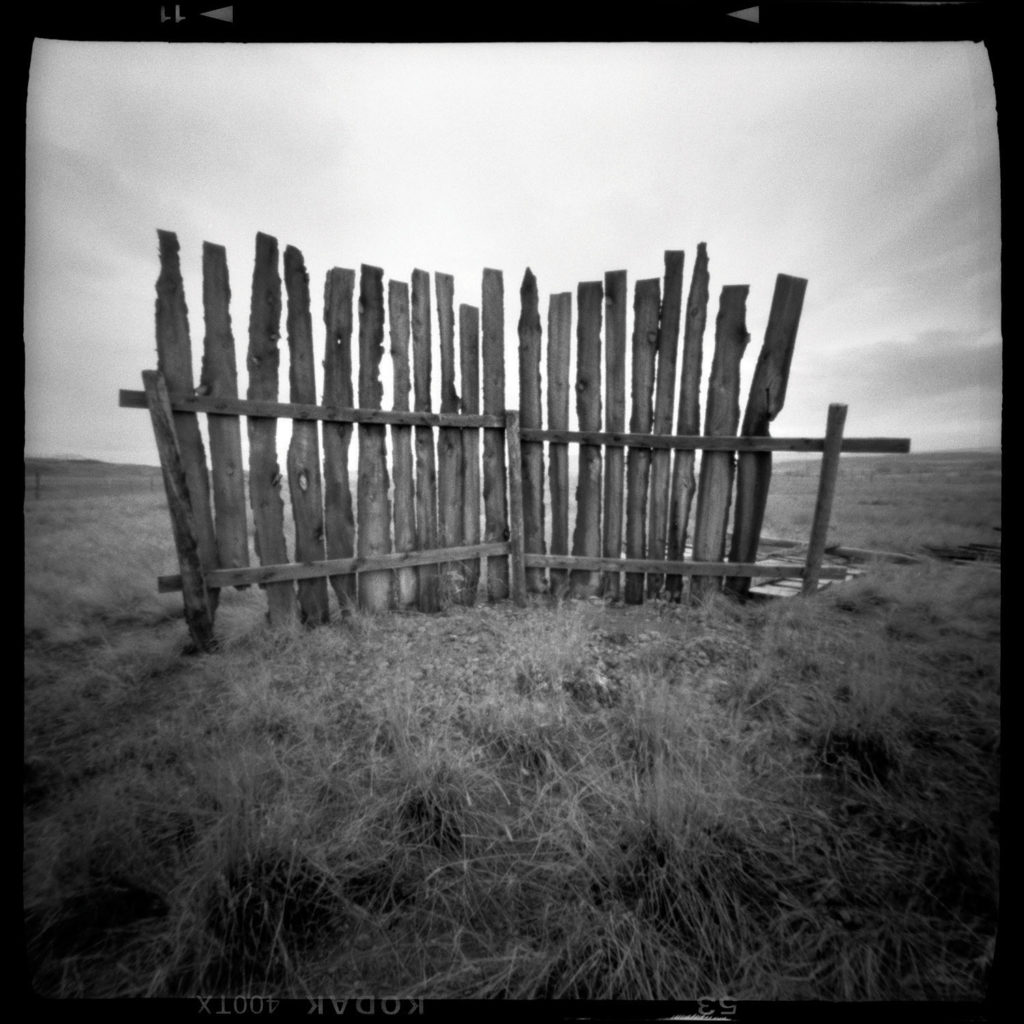 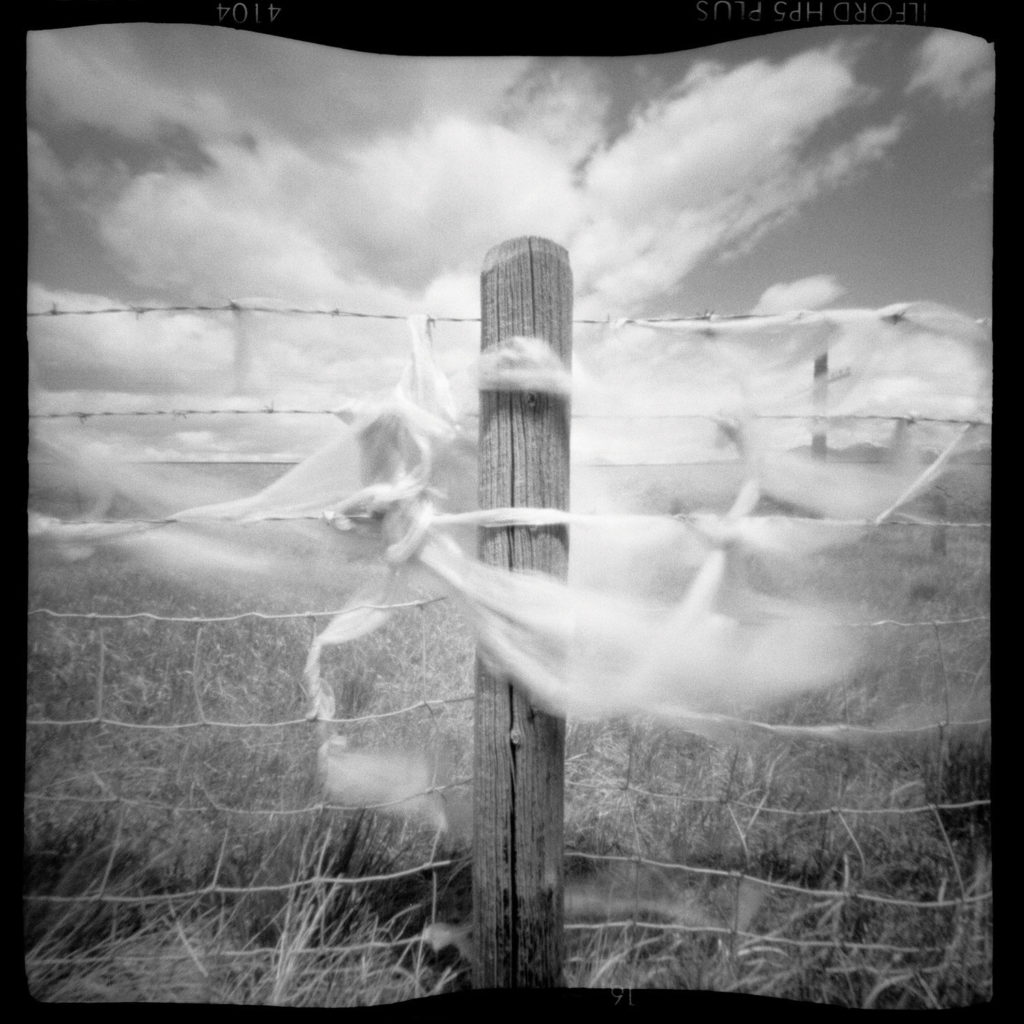 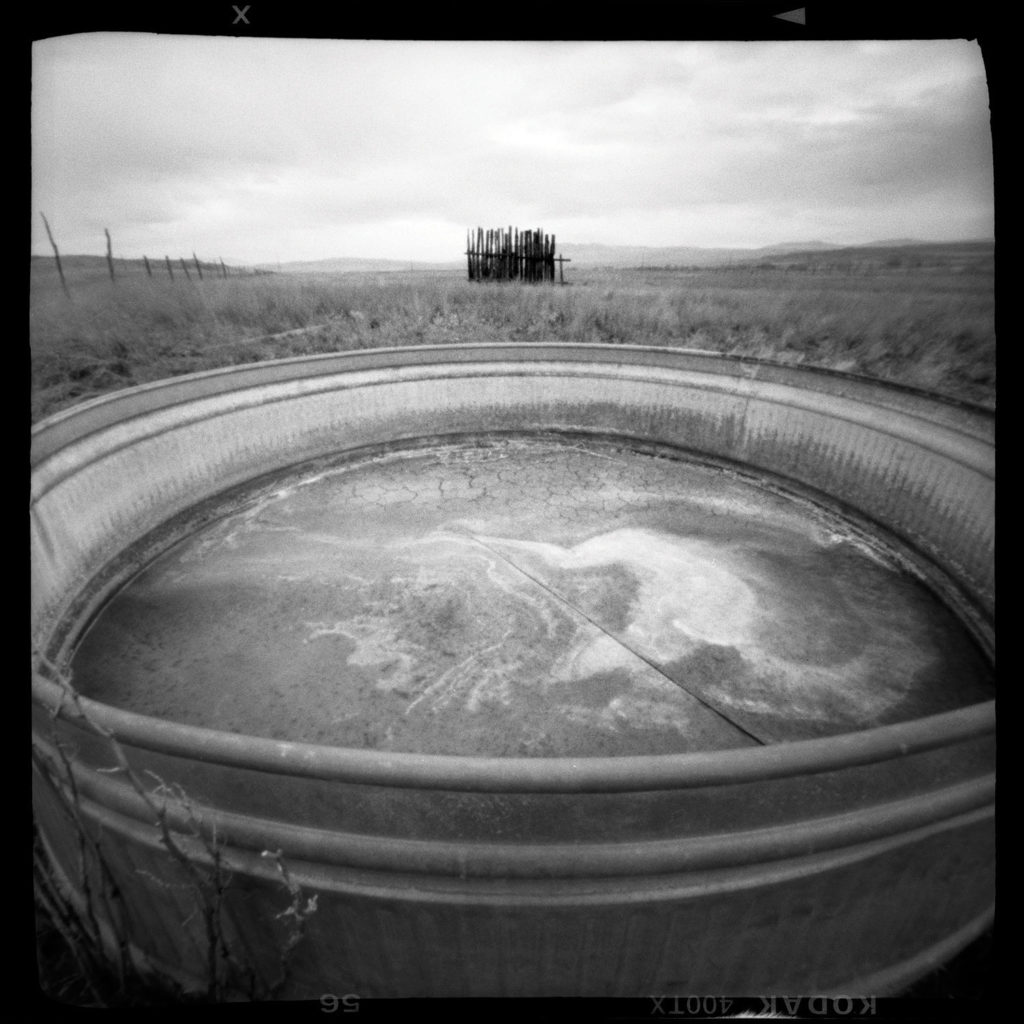 Clockwise from top left: Great Basin Rye Grass – Ferris was drawn to this roadside attraction due to its resemblance of a “Montana peacock” or phoenix. • Wind Fence & Stock Tank – Ferris stopped to photograph this fence and noticed the stock tank just as he turned back to the car. “Two photographs I like in 10 minutes, that’s a good day for me,” he says. • New Tumbleweed II – the film ended up buckling in the box camera and curved the edge of the photo. “I consider it a happy accident,” Ferris says.

I made these photographs in the early- to mid-2000s, and I still like the work. Many people who work creatively will tell you it is not always the case that one can look back and still find value in what’s been done. 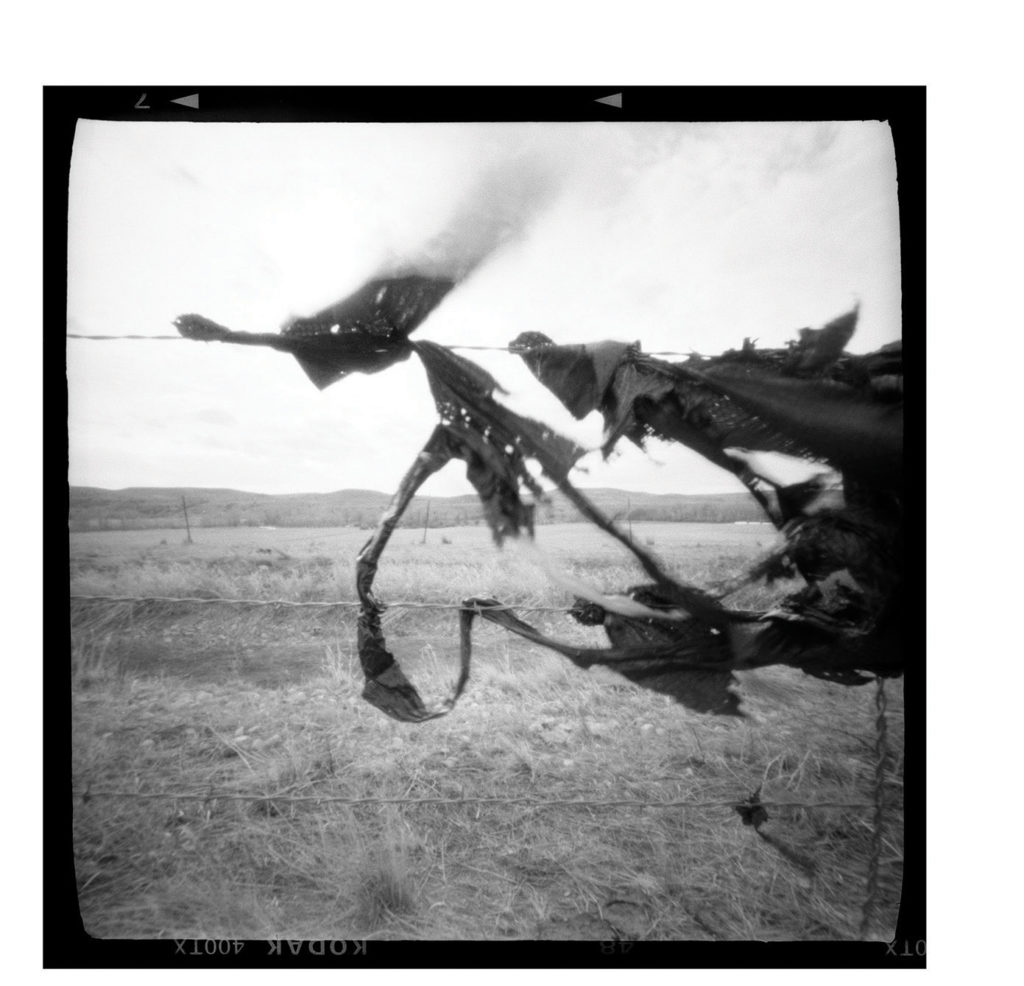 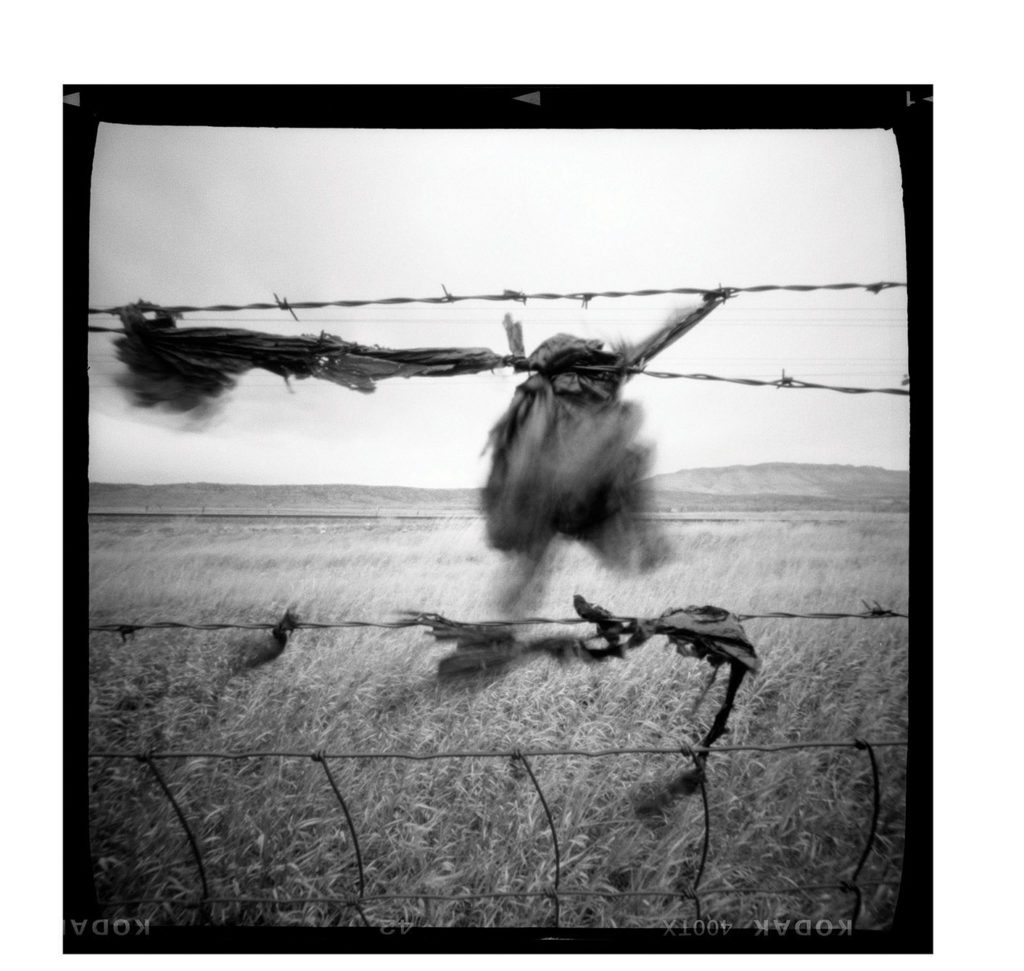 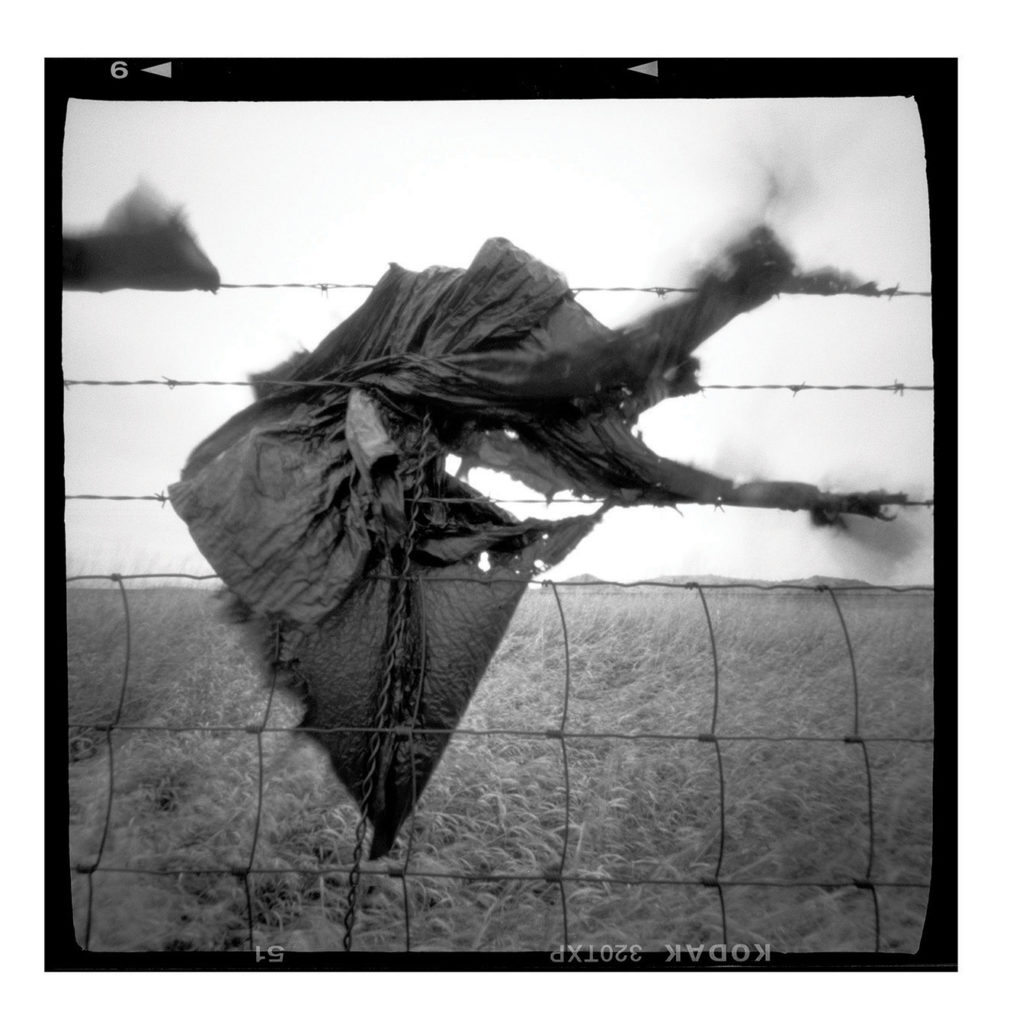 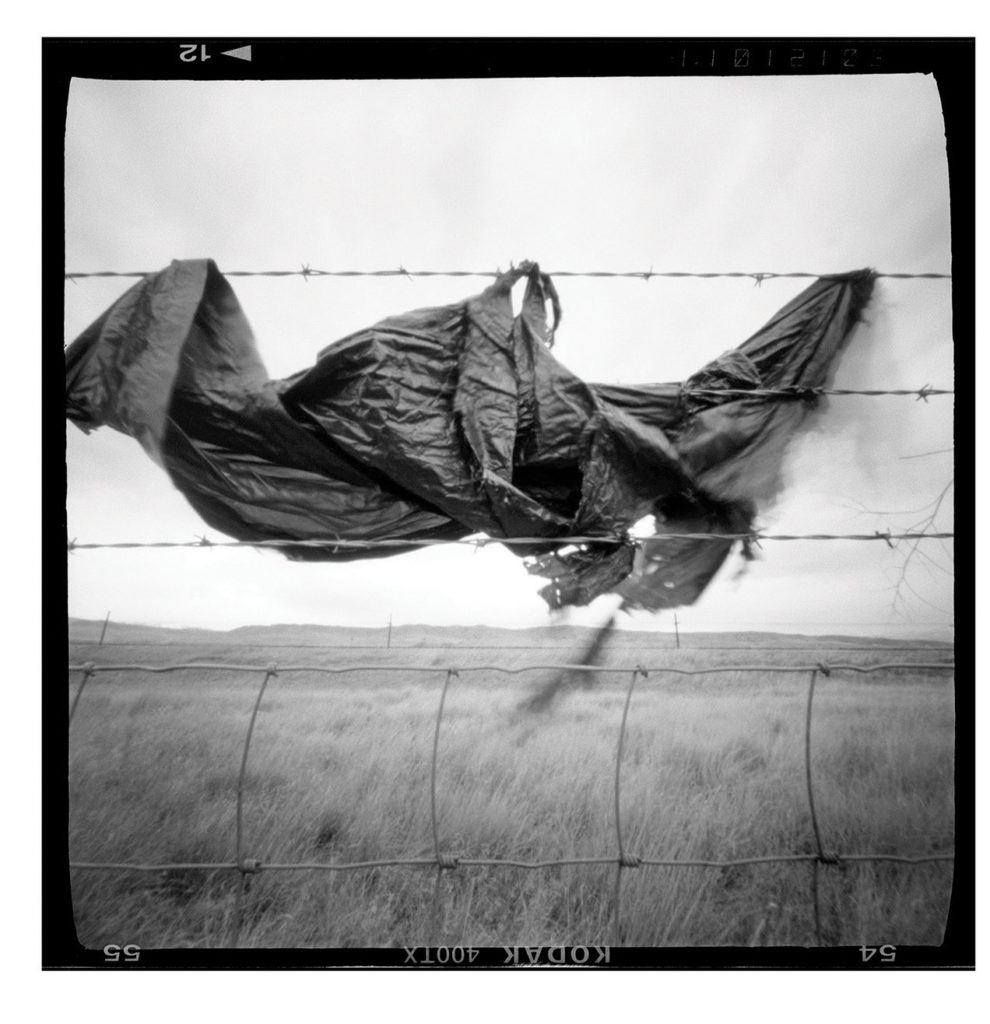 New Tumbleweed-Black – Ferris captured all of these images on a short stretch of road. “I can’t help but see animistic forms,” he says.

I’ve used a pinhole camera and black and white film for the visual effects, and as a sort of backlash against the squeaky clean “perfection” of digital photography. The blemishes and imperfections appeal to me. The lack of a lens creates a softer image that’s somewhat nostalgic and mysterious. The lack of a viewfinder creates situations where I’m not sure of what I’m getting, or not getting, in the frame. This can be disappointing, but it can also result in some pleasant and unexpected surprises. 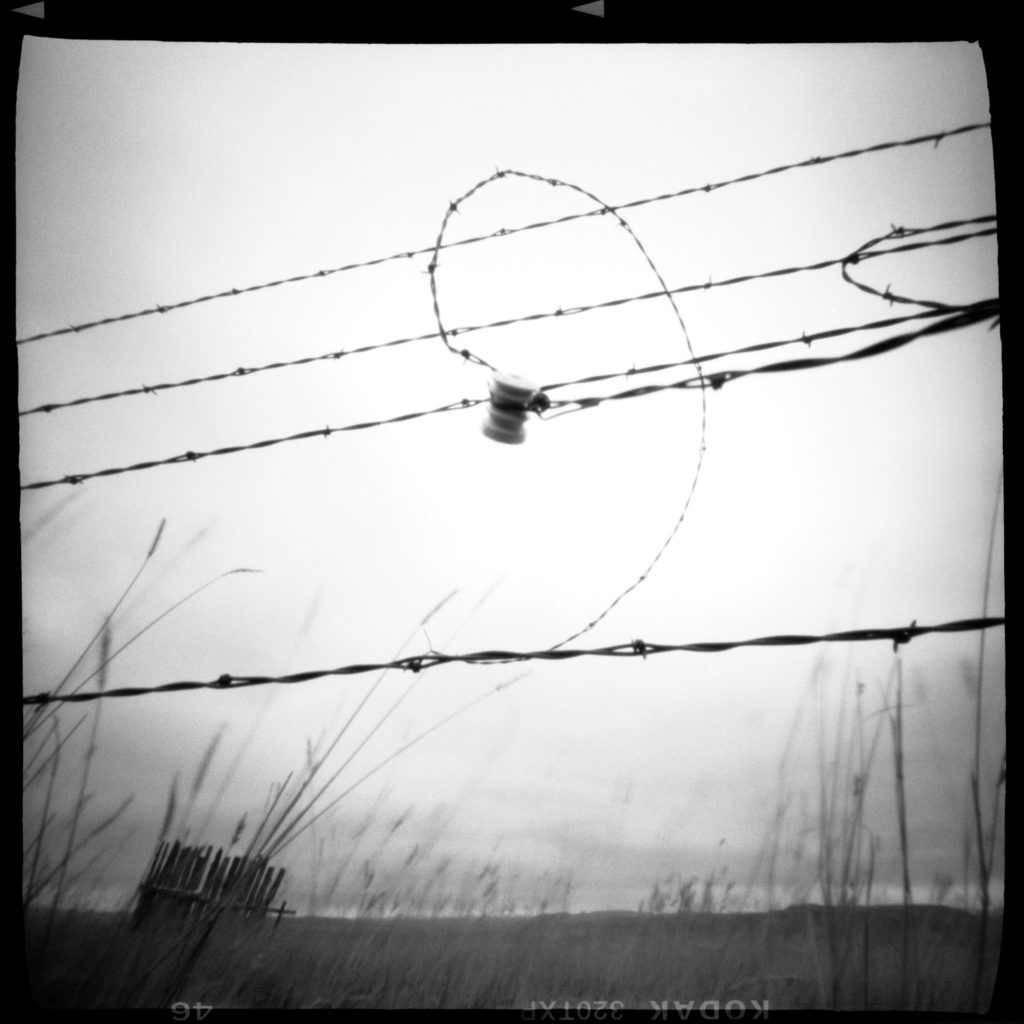 Electric Fence – “the graceful, curved wire extend- ing from the insulator pairs well with the fine grasses in the distance,” Ferris says of this image.

Using the road as a metaphor for life, these are the small, commonplace, everyday objects we often overlook and take for granted — those that often constitute the finer things in life. As I go down my road, I continue to find pleasure, hope, and joy in the world I see around me. When the road is rough, I find solace in the sublime, the visual poems that are everywhere around us when we take the time to look. 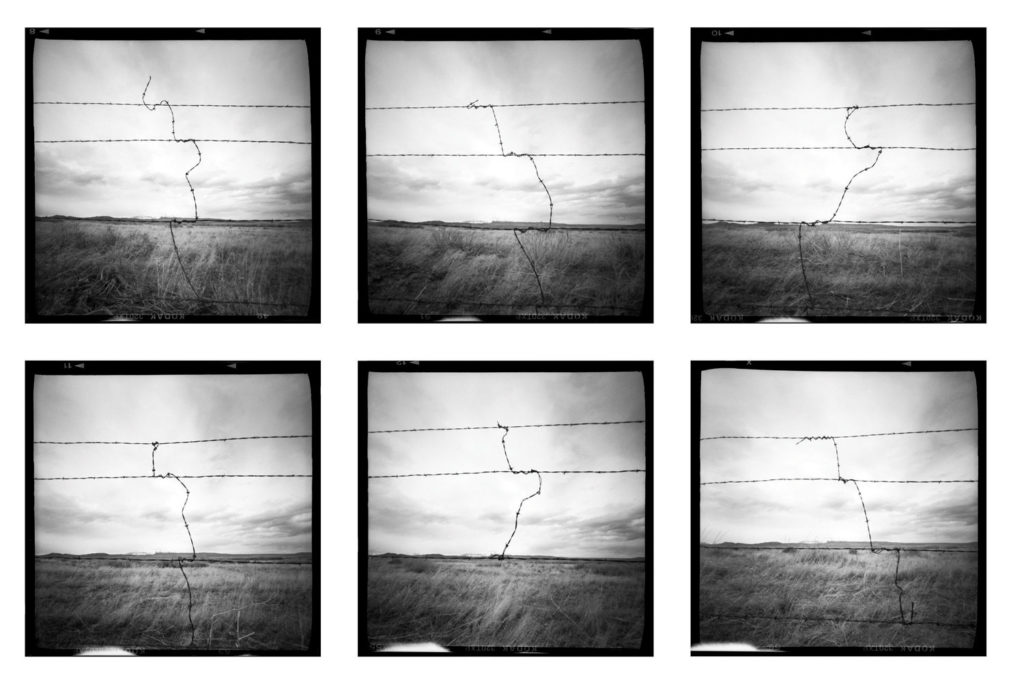 Tie Wire –the photographer discovered another low-tech happy accident with this one. “I was think- ing of these wires as black lightning against the dark sky, and when I developed the film, I discovered the ‘burn marks’ at the bottom of the frames caused by a light leak,” Ferris says. 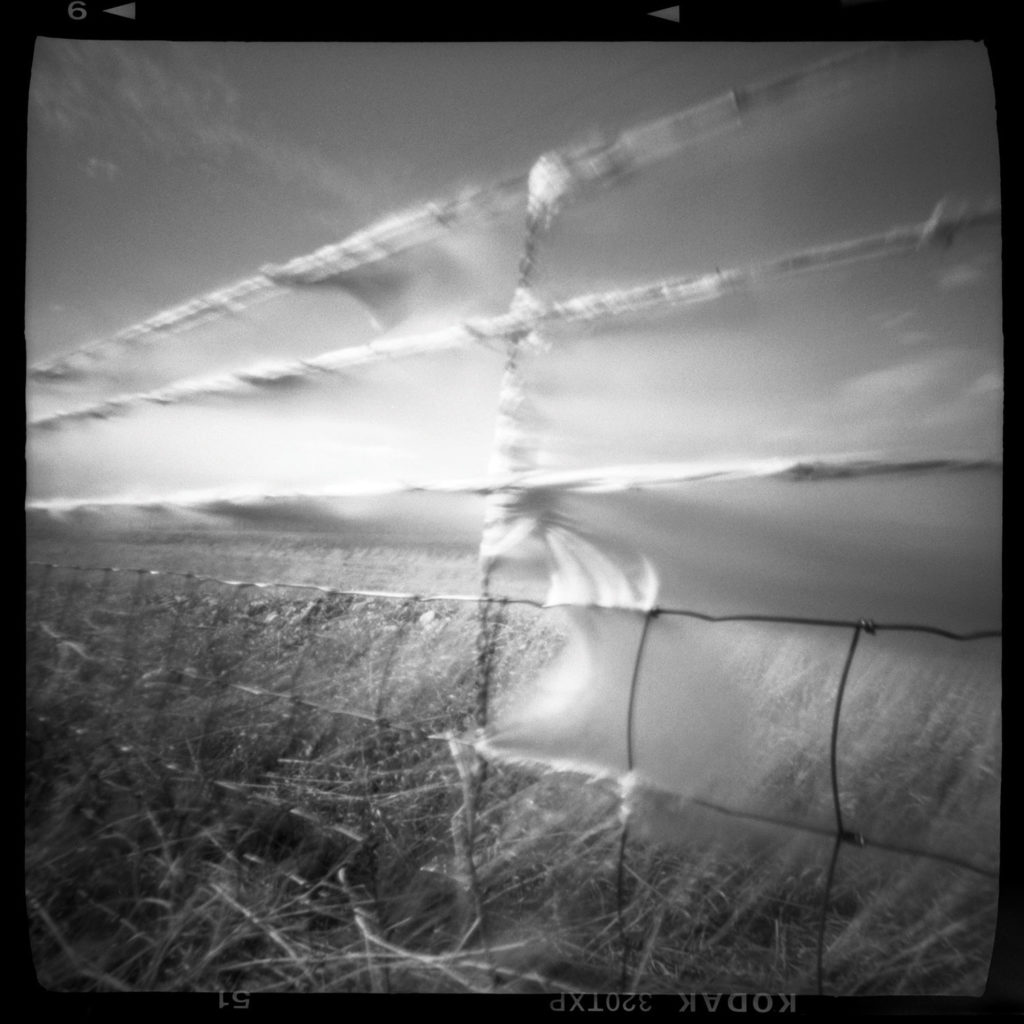 New Tumbleweed I – caught in a fence, plastic flutters in the wind just outside of Livingston, Montana.