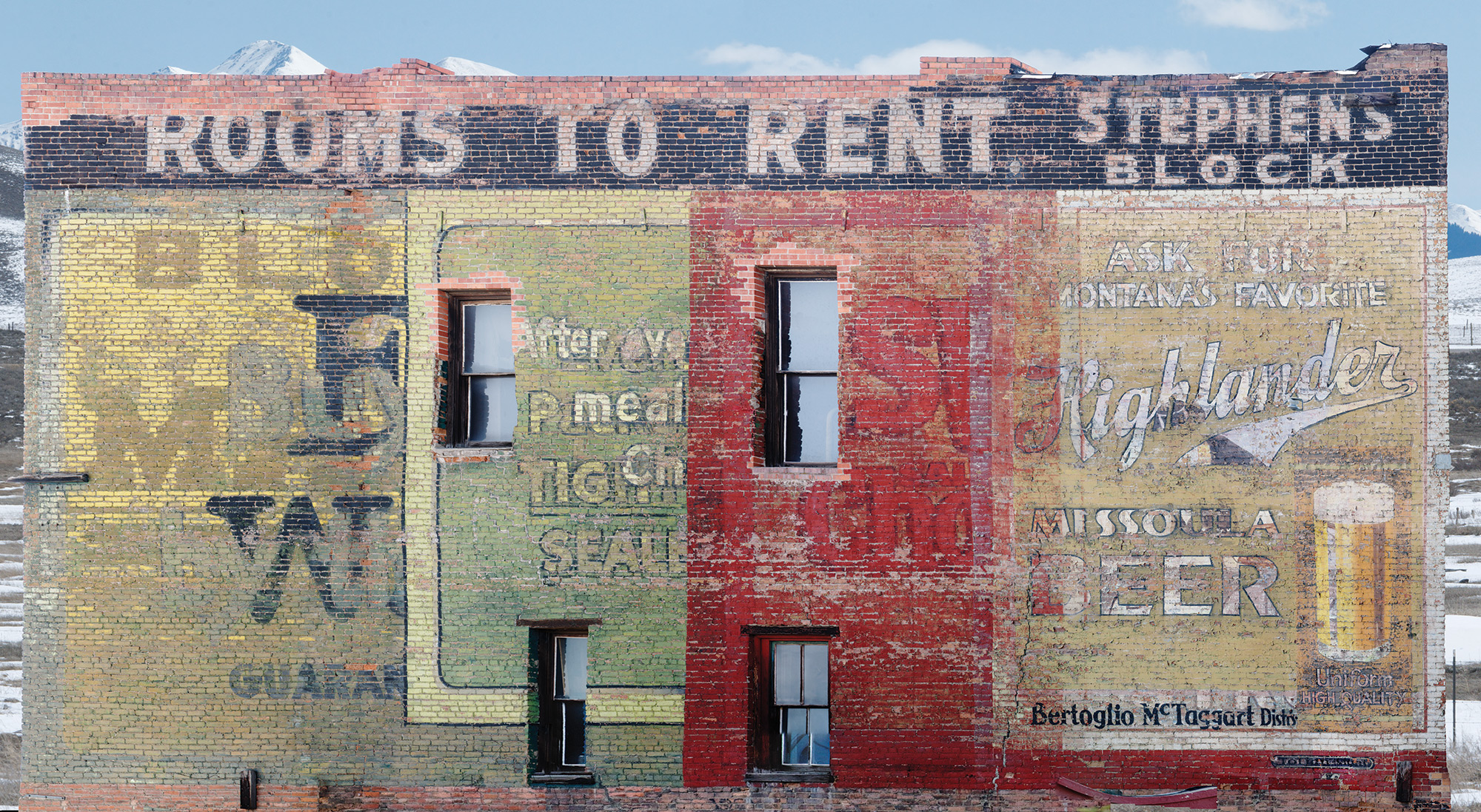 15 Feb Images of the West: Ghost Signs of Montana

In 1940’s Butte, a cabbie drops his fare before the Finlen Hotel’s Park Street entrance, looks up and spots a four-story-tall sign in red, white, and green, hawking Wrigley’s Spearmint gum. The image is of its package tilted rakishly, its spear angled skyward. The green background is an aqua sea, the white of the cellophane a tropical beach. His mouth begins to water. “The taste that lasts,” the advertisement reads. “Buy it by the box.” Beneath the green, painted over but visible, is an older ad — a ghost sign — for Elgin Watches. “It’s time for …” Contradictory emotions wash over him. Time for work, or time for gum? There’s something about how that pack and its spear are angled. Maybe he’ll snag a stick and chat up that girl at the hotel’s candy stand.

Wall signs are among the oldest advertising media, and subliminal messages their fiercest tricks. No Montana city has more signs than Butte — close to 100. Most employ letters without imagery, but the best — Bull Durham’s in Walkerville, and Wrigley’s Uptown — employ both. For nothing creates dream space more quickly than a picture, and nothing sells like erotica. Coca-Cola bottle necks are without exception angled provocatively, and cigar ads … well.

Ghost signs — wall signs that have faded, or that intrude upon others — have been shown to possess a new value, that of attracting tourists. Montana cities such as Butte, Billings, and Missoula are working to preserve them. The website of Mainstreet Uptown Butte calls ghost signs “an important part of our heritage,” and goes on to say that “if these signs can be preserved or restored, they should be.” The National Trust for Historic Preservation has suggestions for their maintenance, and Butte has brought The Walldogs — “a national network of muralists and sign restoration specialists” — to the city for help with restoration. Ghost signs contain images that are technically defined as “faded to the point of illegibility,” Wm. Stage writes in Ghost Signs: Brick Wall Signs in America. “[They]become highlighted under certain conditions, such as the rosy glow of sunrise or sunset, or in the first minutes of rain.” They are “the commercial archaeologists’ pièce de resistance.”

They also are good for tourism. Mainstreet Butte advises the visitor to allow “an hour or so of your time to walk or drive to see them and receive a message that was placed there more than a century ago.” Former Butte preservation officer, Jim Jarvis, half-jokingly likens ghost signs to paintings of Renaissance masters. “Imagine some guy on a scaffold, painting one right on the side of a building, clinging there for days, like Michelangelo in the Sistine Chapel.” And not all signs are outside, Jarvis adds. “Often what would happen was that they would use the existing exterior wall of one building as the new interior wall of a new building. So if there was a ghost sign on that old exterior, it would end up on the interior of the new building. In the Acoma, one of those tricked-out loft apartments has this incredible ghost sign inside.”

Butte has done what it can to retain its ghost signs, but they are protected “about as much as the buildings themselves are,” Jarvis says. “Which is, again, that you are required to go through a review process. Some of the signs have faded to the point where they are truly illegible. There’s nothing to see, it’s just a weird smear of color. We encourage property owners to retain or leave alone the ones that are legible. And the ones that have truly faded to nothingness can be removed or painted over.”

These are irredeemably spooky, their creators’ identities lost to time. Stage compares walldogs (the artists’ historical monikers) to painters of the Ice Age: “Both worked at inscribing legends. The cave painters depicted highlights of the hunt, while walldogs depicted symbols of commerce on the surfaces of urban monoliths.”

The first ghost sign I recall being impressed by was the Rex Flour sign beside the Pony Bar in Pony, Montana. In the summer of 1972, Pony was a ghost town with a handful of residents. One was the Pony Bar’s owner, a woman named Bert Welch who that August afternoon startled me with her Packard’s horn as I studied the sign’s legend: “Use Rex Flour, Rex is King.” The barmaid pointed at my VW and said, despite the fact that Pony was deserted, “You’re in her parking place.”

Signs such as Rex Flour and those in Butte survive because of their placement on walls — “Northern exposure is best,” Jarvis says — and because of the 19th and 20th centuries’ use of lead paint. “Use at least one-third pure white lead,” advised Signs of the Times magazine in 1906. This, mixed with linseed oil, turpentine, and dry pigments, then painted on smooth red brick, did the trick. Its toxicity poisoned walldogs, however. Many drank “to cut the lead.” Their lives were nomadic. “They were a rugged lot,” Stage writes, “in the tradition of cowboys, mariners, and Arctic explorers … they embodied an eclectic mix of skills often associated with the draftsman, the chemist, the artist, and even the acrobat.”

The walldog who painted the Rex sign in Pony might have ridden down from Butte or traveled from as far east as St. Louis. Norman Rockwell was a walldog; he and other signers considered themselves artists. A veteran painter told Stage, “Some of them would go out West on a six-month circuit, and when they came to a town they would first paint the signs on the general store, the saloon, and anything else.” Half the week was dedicated to signs, the other half to “scenics — the little brooks, the mountains, commissioned portraits, too.”

Rex Flour’s sign might have made a bar patron feel like a king, but most illustrated ads at the turn of the 20th century were aimed at women. Pears soap may have created the first female-directed ad, but Freudian psychology already was bursting its buttons (Sigmund’s nephew was a PR man). Sultry pictorials such as that created for Woodbury Soap (“A skin you love to touch”) were selling with sex. Those that weren’t still used subliminal tricks to snare the subconscious. Beer bottles were tilted suggestively, cigars sported names like Cremo, and legends like Wilson Liquor’s  “High Ball, That’s All,” were common.

But back to Butte’s Wrigley sign, at 83 East Park Street. Spearmint was launched in 1893 (Juicy Fruit slightly earlier), so the sign might have been painted as early as then. Its style and technique suggest later — trompe l’oeil was not prevalent in the 19th century — and the eroticism of its tilted package suggests 20th century psychology. Mainstreet Butte guesses its construction was between 1893 and 1913. I’ve always been fascinated by it, and only recently connected that fascination with two other signs in Livingston.

On a sunny day last fall, I walked past ghost signs on the wall of a defunct cigar factory at 216 South 2nd Street, and paused. The ghosts — one for the Livingston Lumber & Coal Company, the other for a cigar brand (“Every Puff a Pleasure”) — created a stereoscopic effect. The cigar being smoked was roundly phallic, the words coal and lumber suggesting heat and wood. I desired neither coal nor lumber, and I detest cigars. But I found myself remembering a girl I’d known 40 summers previous who had lived in an apartment next door, at number 214. She’d had the first mid-body tattoo I’d seen, of a tiger, and she’d chewed gum. I was flooded with the memory of her kisses, of the sweet taste of spearmint or Juicy Fruit — I couldn’t recall which. So I hurried to TJ’s Gas N Convenience and bought a pack of each.

I wasn’t sold, but I was hooked. 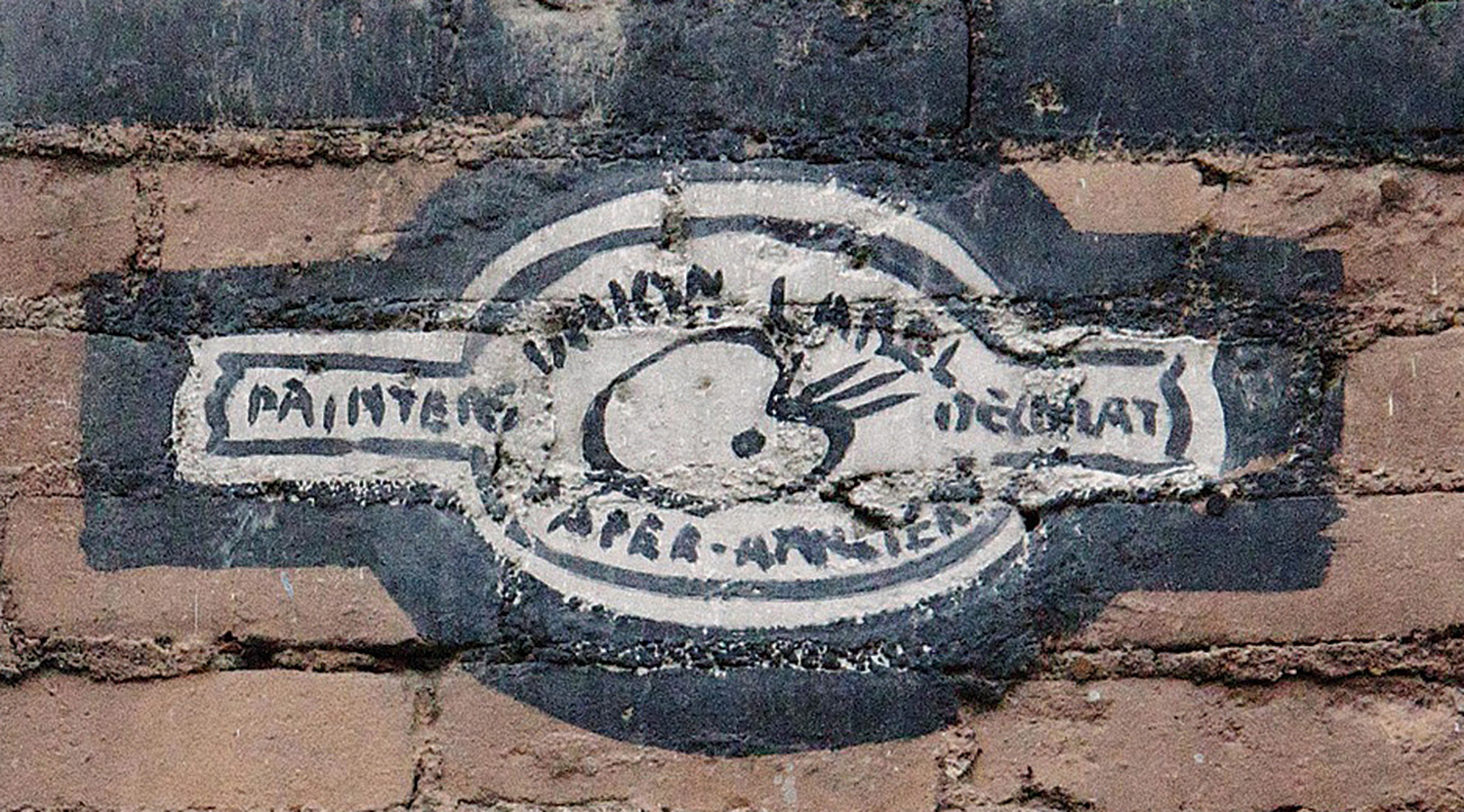 This “union label” closeup was extracted from the Sweet Caporal Cigarettes sign in Butte. 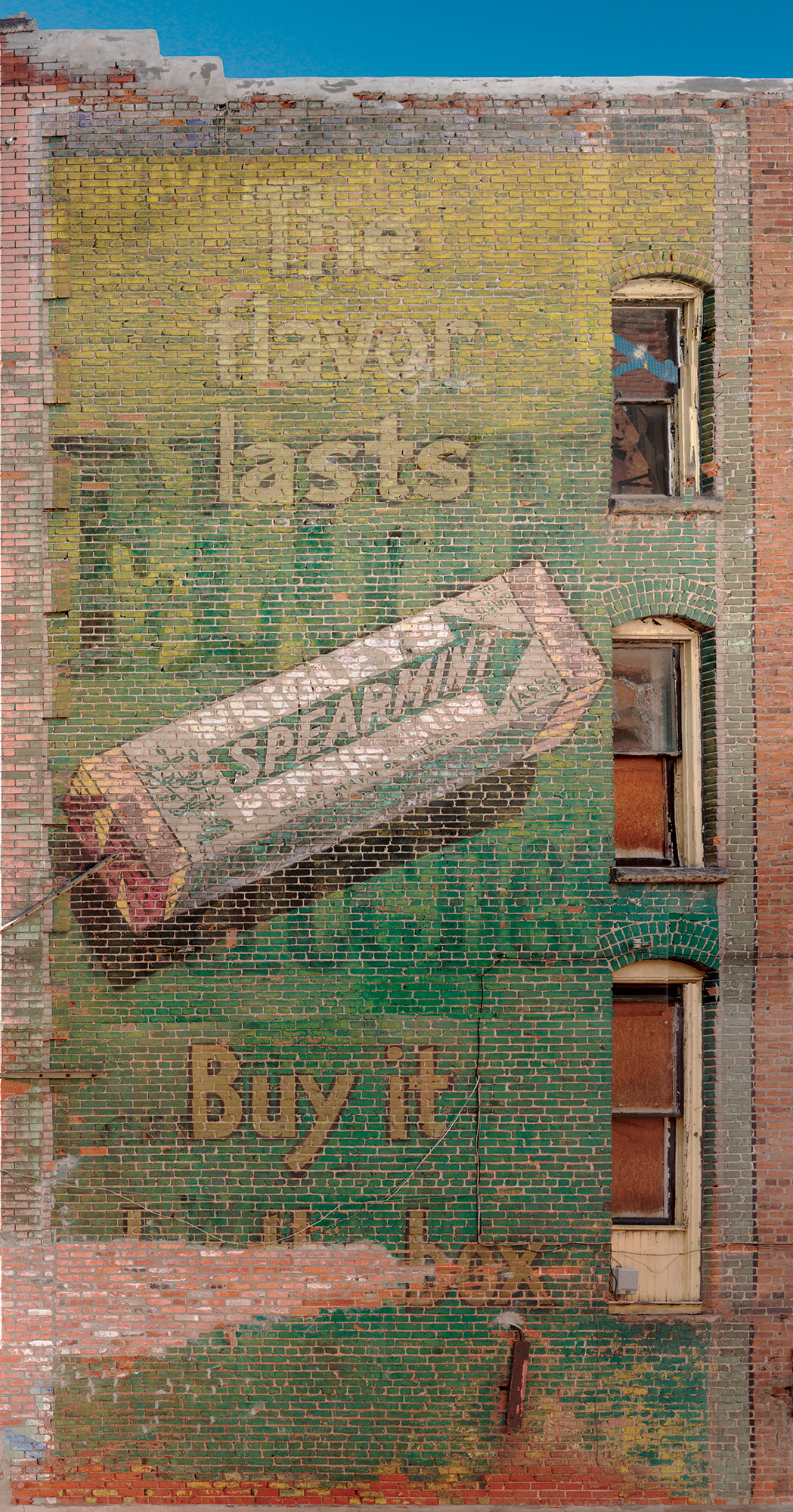 The Wrigley’s Spearmint gum sign on Butte’s East Park Street was likely painted between 1893 and 1913. 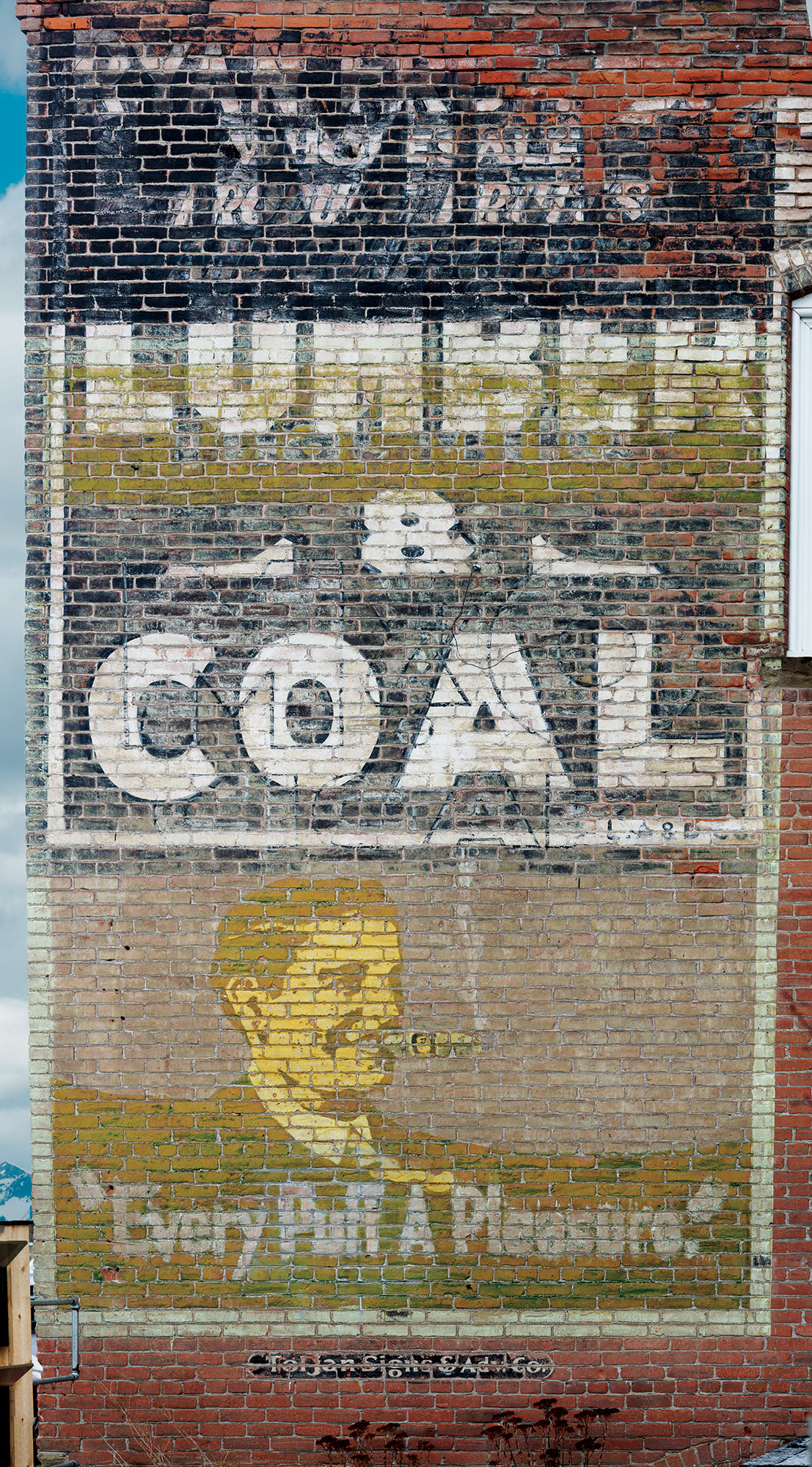 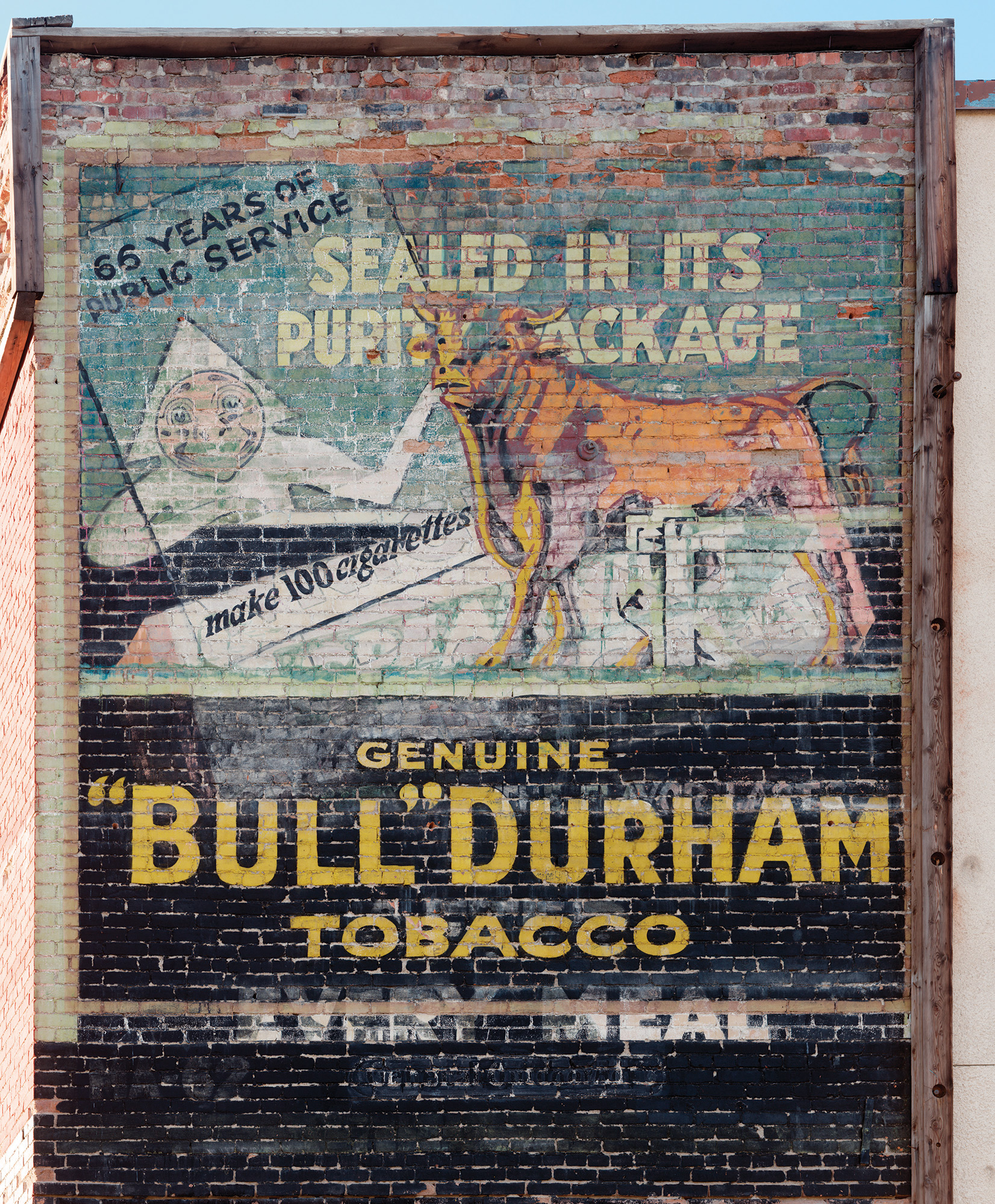 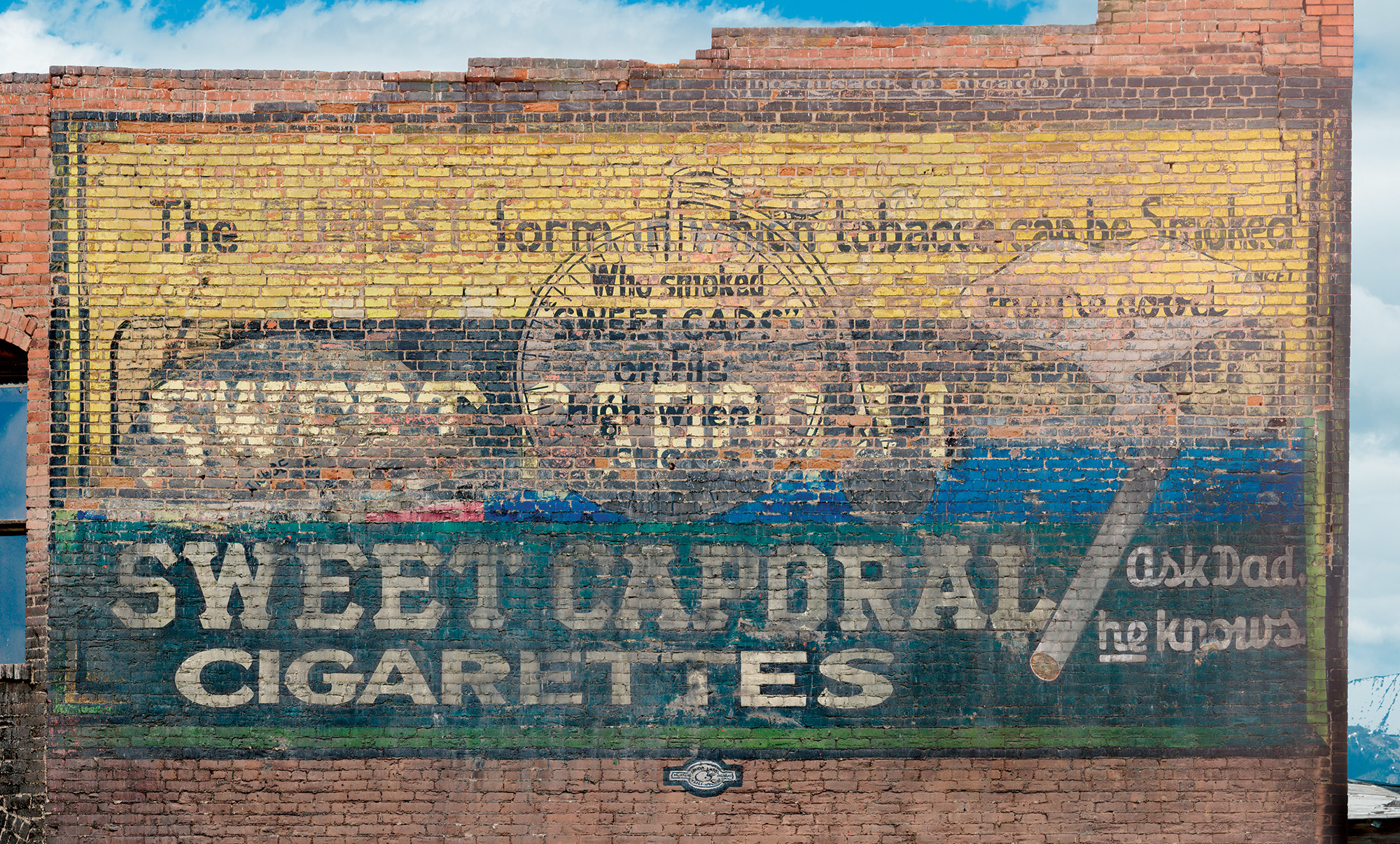 According to photographer Dr. Ken Jones, the Grain Belt Beer sign, above, was lost when the building was demolished. But that tear down exposed the beautiful Caporal Cigarettes sign to the left.

From Bloch Bros. Mail Pouch Tobacco on the left to Highlander Beer on the right, this multi-sign in Butte, Montana, shows the effect of ghost signs painted over one another. The oldest of these dates to around 1905. 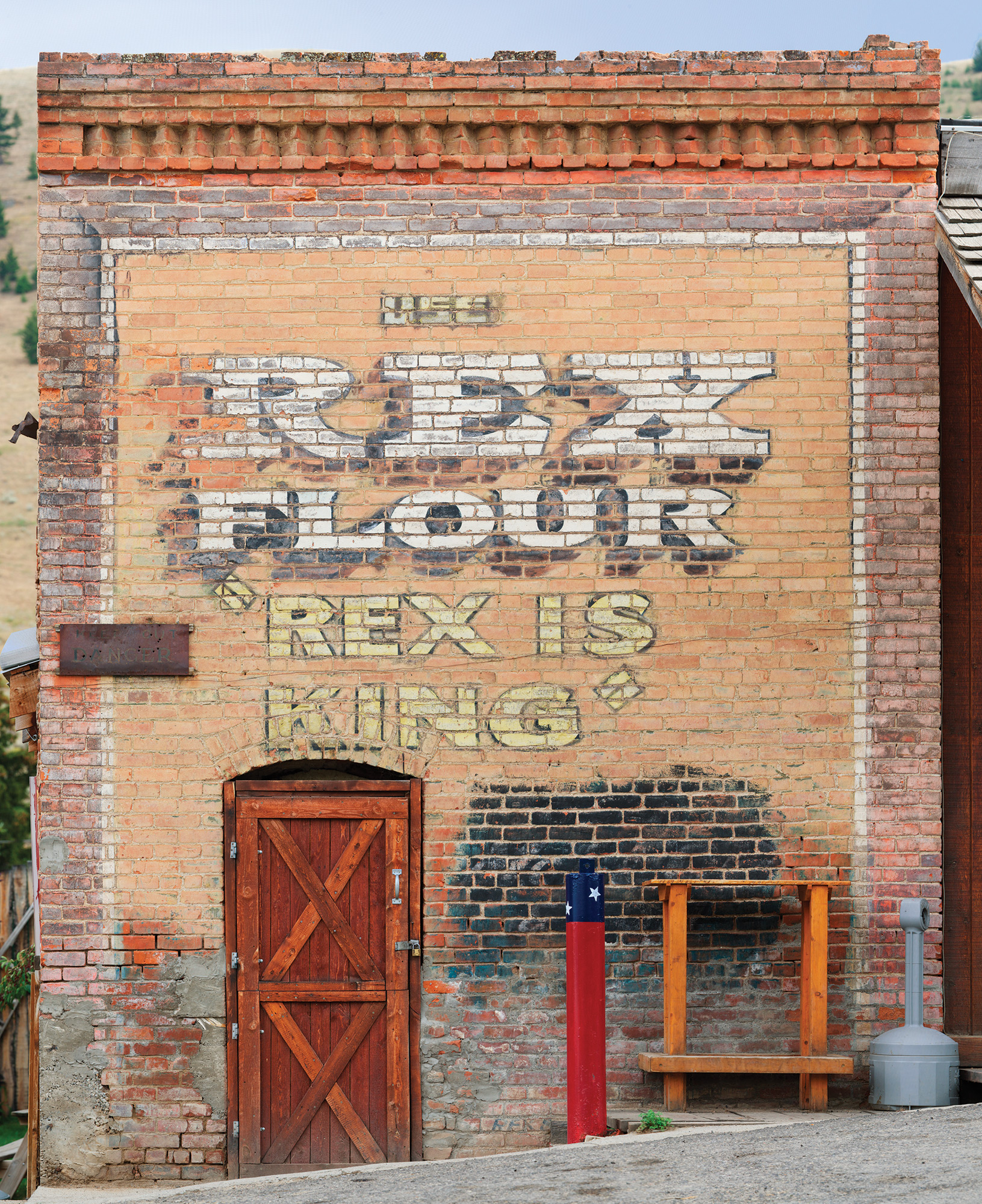 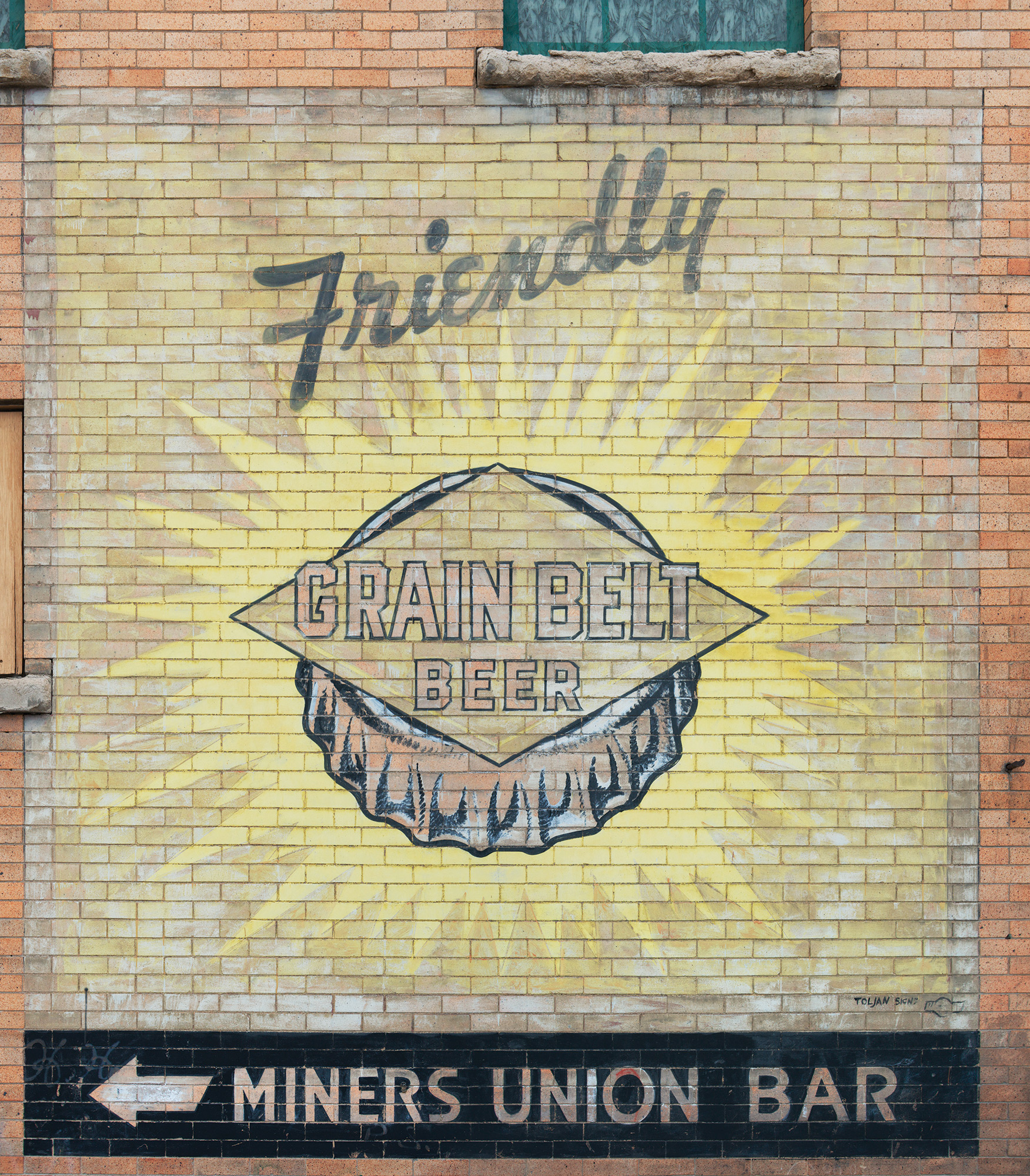 According to photographer Dr. Ken Jones, the Grain Belt Beer sign, above, was lost when the building was demolished. But that tear down exposed the beautiful Caporal Cigarettes sign to the left. 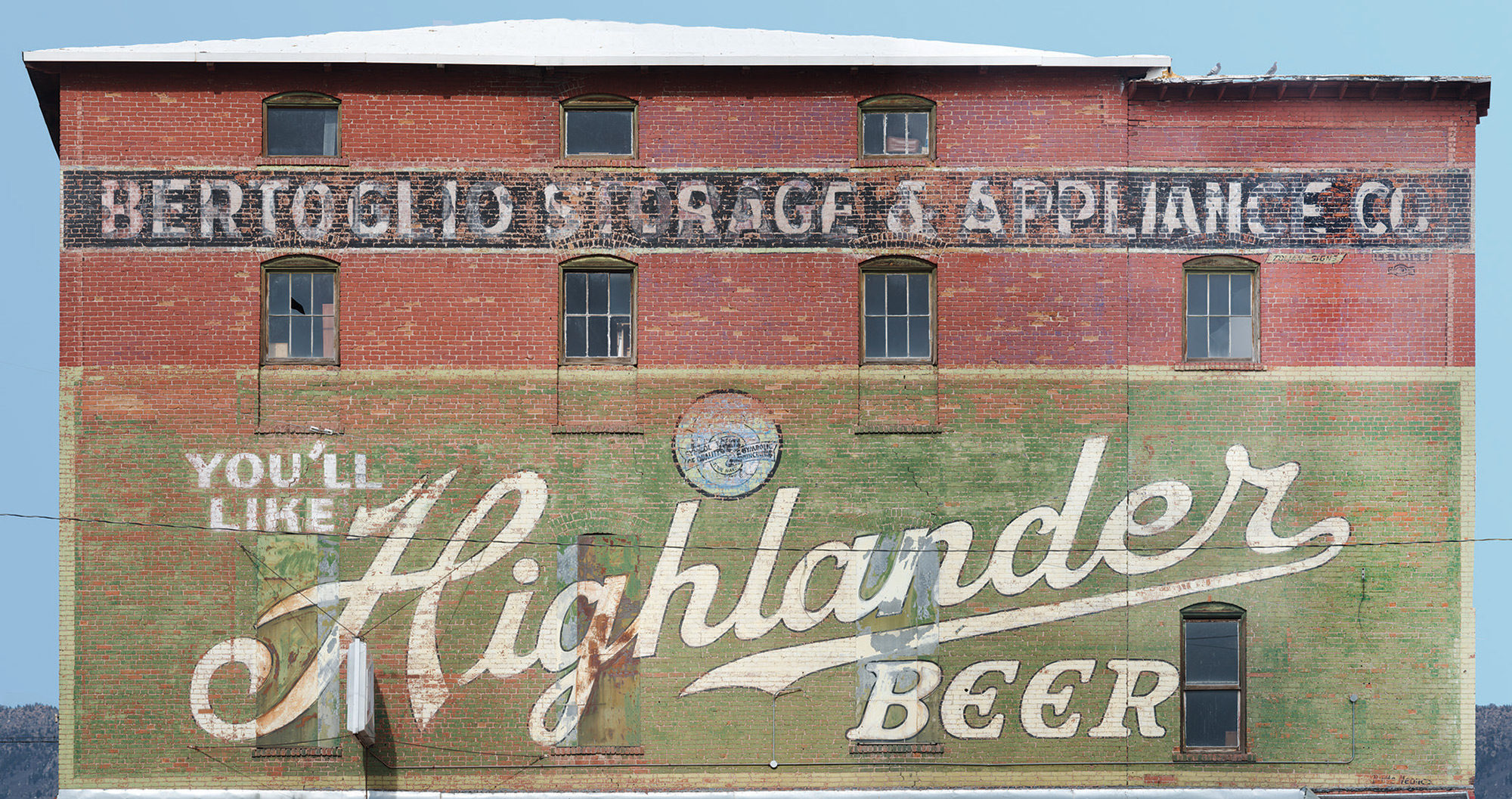