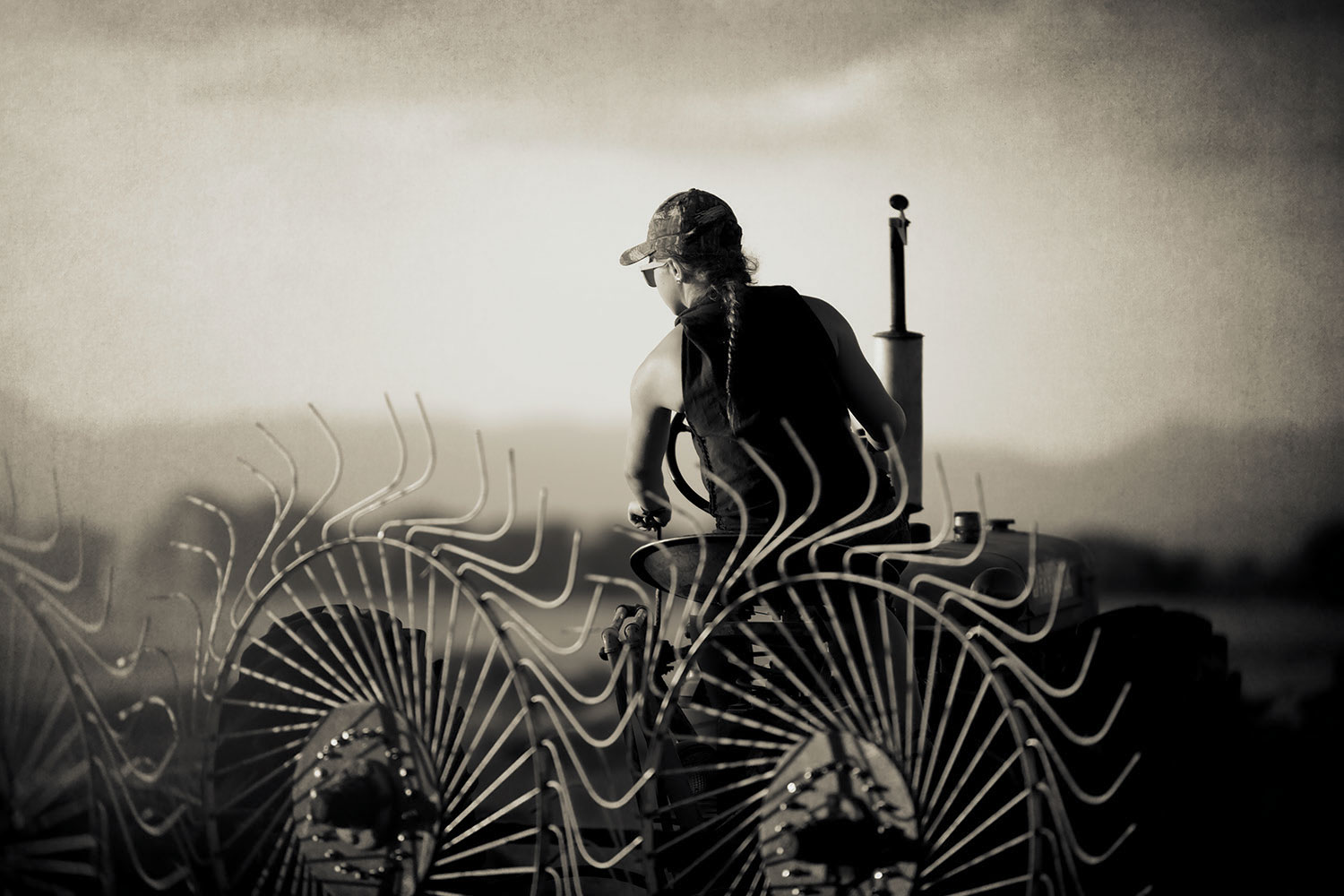 A member of the crew rakes hay into windrows. • beaverslides still decorate the land- scape in Montana’s big hole valley.

in Images of the West, Summer 2019 Written and Photographed by Eric Schmidt Posted at 22:55h 0 Comments
Share

Montana’s Big Hole Valley is riddled with ranches that have held their ground for many generations, wicked winters be damned. Known as “The Land of 10,000 Haystacks,” the name refers to a traditional method of stacking hay, a system that — replaced by the hay bale — is no longer the norm. 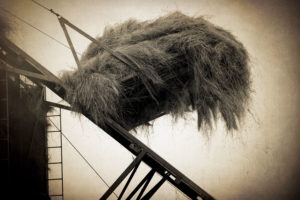 A load of hay is lifted by the hoist truck before being dumped into the stack. 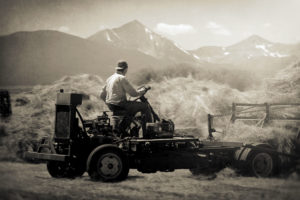 A buckraker pushes a load of hay onto a beaverslide.

When I set out to photograph a traditional haying crew at work, I reached out to the Hirschy Ranch in the heart of the Upper Big Hole Valley. Fred Hirschy was receptive to the idea, but there was one small problem. They had abandoned their old gathering method the year prior, adopting modern-day baling equipment instead. “Try the Petersons,” he said, “they’re still pullin’ slides.”

I first saw a beaverslide while driving with my friend’s father along the upper stretch of the Big Hole River. He told me about a pair of ranchers from the valley, and how they had built the first one ever in Beaverhead County in the early 1900s. Armitage and Stephens were their names, and they referred to it as a “Beaverhead County Slide Stacker,” later simplified to a “beaverslide.” It was decades later when I saw one in use for the first time. 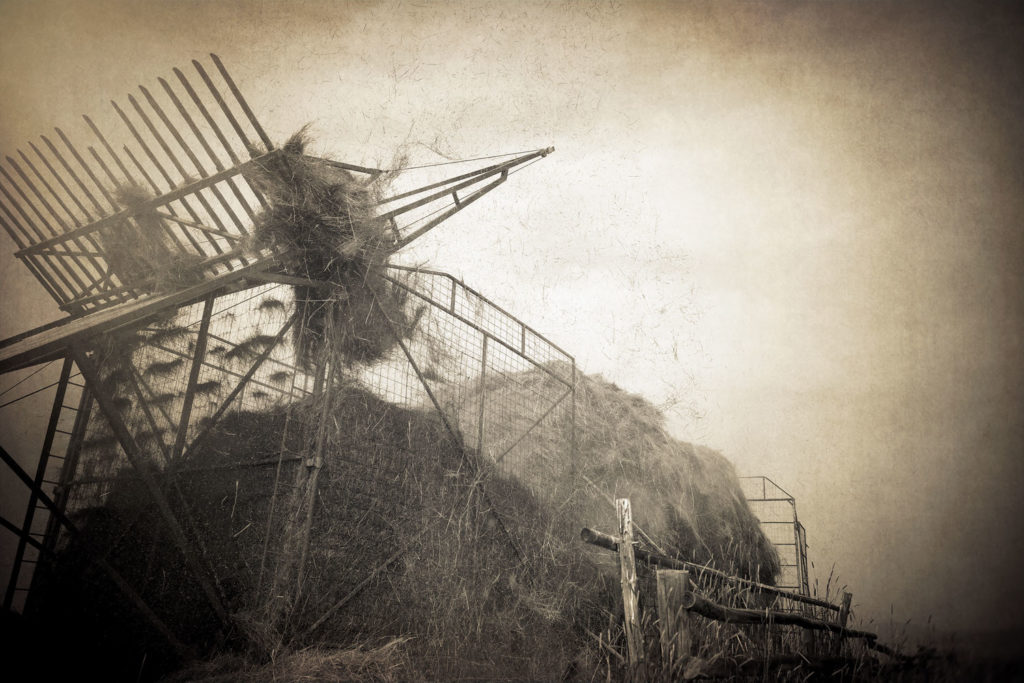 It’s rare to see such an operation today, as most of the existing beaverslides appear to be nothing more than sleeping giants, weathering away in a pasture. But the handful that are still in use in the Big Hole come to life every summer, usually at the end of July. 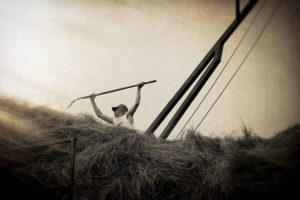 Rancher Alfred Peterson stands on a haystack and uses his pitch fork to make room for another couple of loads. 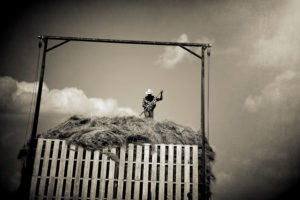 Crews, most of which are made up of family members, start with the cutting process. After the hay dries for a few days, wheel rakers push it into windrows, followed by the buckrakers who gather it into baskets and drive it to the carriage at the base of the beaverslide. The hoist truck, rigged with pulleys and a long cable, dumps the hay into the right section of the basket. When the stack is approximately 25 feet tall, a tractor is brought in to pull the beaverslide forward several yards. The process continues, resulting in a long, continuous haystack. It’s  repeated a few more times, and then onward to the next section they go. 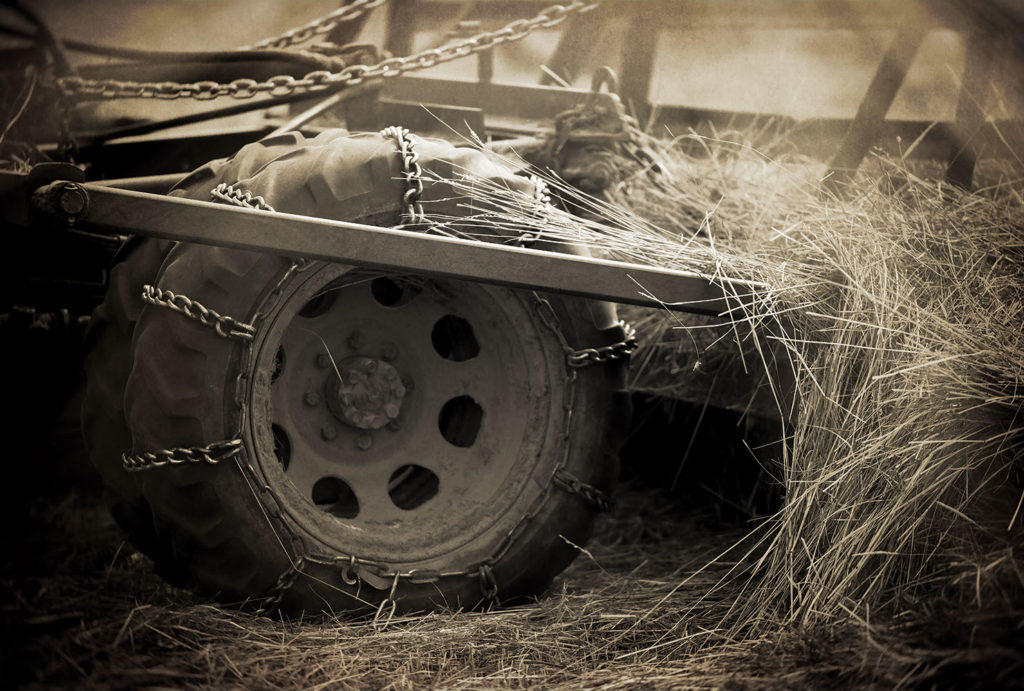 Buck- rakes are sometimes outfitted with chains to make the operation more efficient.

This is the course of action at the Peterson Brothers Cattle Company for 10 to 12 days during the summer. The Petersons hold firm to this method, believing that it remains the finest way to harvest, offering the fastest, cheapest baling, and least amount of waste when putting up hay. But there are two main factors responsible for the widespread disappearance of the beaverslide operation: the difficulty of finding crews that want to do the work, and the fact that it’s faster to feed stock with bales, which is particularly important when the harsh winters arrive in the Big Hole Valley.