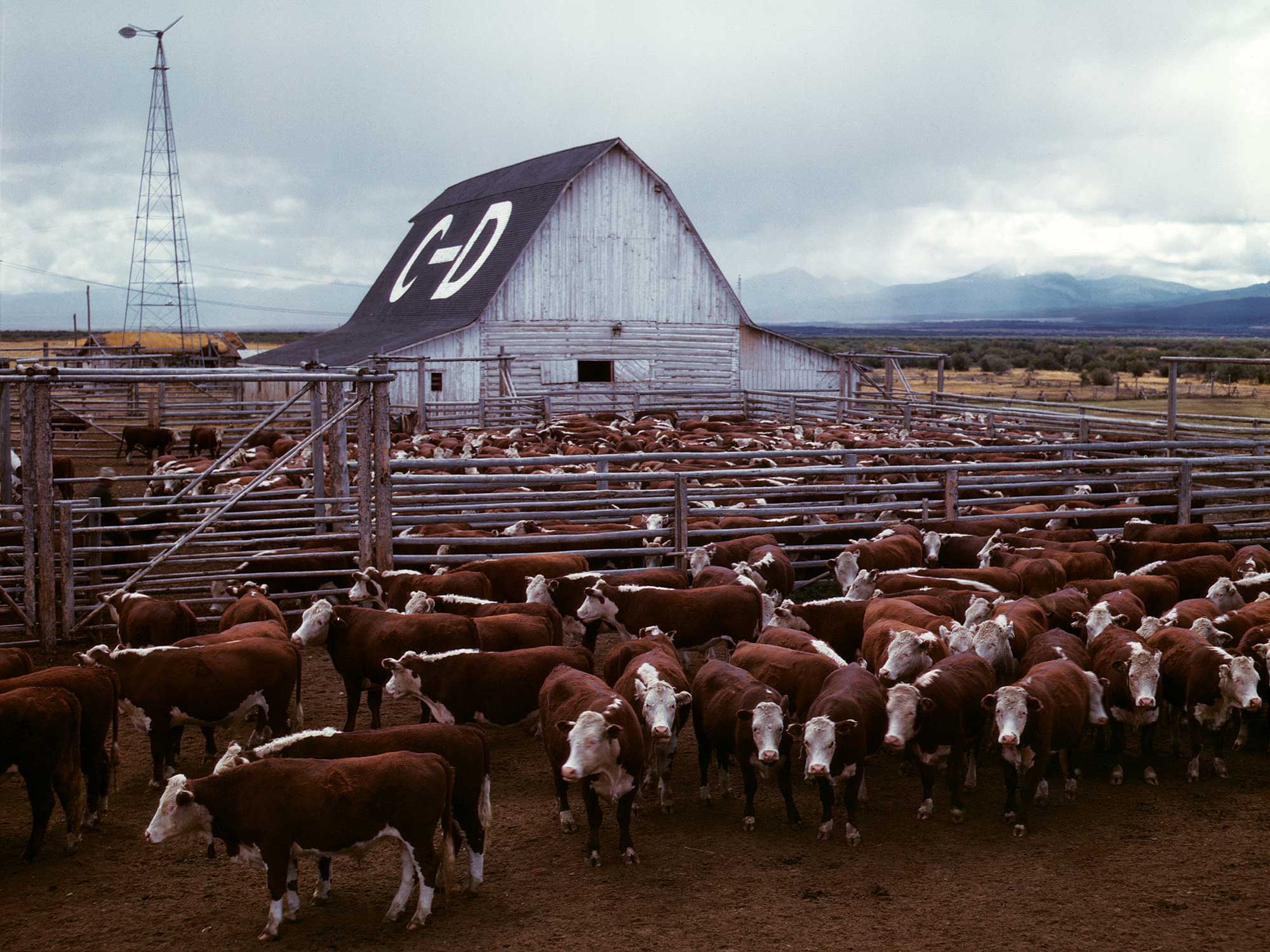 It defies common sense, but many people think of the Great Depression and the early years of World War II in black and white. To some degree that’s because no convenient, stable and accurate color film existed until 1939. Mostly, however, it’s because Americans have been exposed repeatedly to the 170,000 monochrome photographs shot between 1936 and 1943 (think Dorothea Lange’s Migrant Mother and Arthur Rothstein’s Dustbowl images) to win support for Franklin Roosevelt’s New Deal and World War II. Despite that flawed monochrome assumption, Roosevelt administration photographers shot approximately 1,600 color images and a handful of those Kodachrome photographs spotlight Montana.

The Great Depression that staggered America in 1929 was just one more sucker punch to the people of Montana. A dozen years earlier, drought had skulked into the eastern two-thirds of the state. Lured by the outrageous claims of unscrupulous railroads, thousands of homesteaders had weathered wind, cold, hail and wildfire since the turn of the century, often from the sketchy shelter of a sod house or tarpaper shack.

The First World War’s elevated grain prices bottomed out by 1921, and farmers who had invested in land and machinery found themselves deeply in debt. Montana’s overextended banks failed at an unprecedented rate and surviving banks were often reluctant or unable to grant extensions on existing loans. Thousands of farms went under and bank failures swallowed up family savings. Commerce in lumber and metals, cattle and sheep, foundered too, with the end of the war.

The late 1920s brought increased rainfall and higher commodity prices, but 1929 and ‘30 ushered in both the Depression and a fresh round of drought. Like perverse thunderheads, topsoil boiled thousands of feet into the air, hissed beneath doors and coated people’s throats. Grasshoppers and Mormon crickets arrived in vast creeping swarms to scarf up already stunted crops.

Thousands of Montanans urgently needed assistance, but President Herbert Hoover believed that relief was the responsibility of state and local governments, augmented by private charities. Organizations like the American Red Cross, however, lacked resources of the necessary scale. The state of Montana, dependent as it was on taxes for revenue, had little to offer as the Depression rapidly shrank property values.

While the 1920s had seen better than 50,000 Montanans withdraw from the land, the decade of the 1930s witnessed a flight compounded by economic stagnation in the towns as well as the countryside. Thousands tearfully packed their bags and joined the bedraggled migration of Dokies (North and South Dakotans) piloting overloaded jalopies to the cities of the coast. Destitute and disheartened, many Montanans found solace in their Bibles. Given the state’s pistol-packing history, it’s a wonder Big Sky Country never bred a Depression-era outlaw equal to John Dillinger or Bonnie and Clyde.

On the other side of the country, Franklin Roosevelt was elected president in 1932. At the same time, Eastman Kodak scientists Leopold Godowsky Jr. and Leopold Mannes struggled to invent the color transparency (or slide) film that the world would know as Kodachrome. Godowsky and Mannes, a chemist and a physicist, began experimenting with color photography in high school after viewing the 1917 movie “Our Navy,” a disappointing early attempt at color film.

Roosevelt came to power promising a “New Deal” of greater opportunity for a nation where tens of thousands of businesses had failed, the unemployment rate had reached 25 percent and the homeless numbered in the hundreds of thousands. He intended to use the spending powers of the federal government to put people back to work (which stuck in the craw of both conservative economists and the congressional majority).

Roosevelt appointed Columbia University economics professor Rexford G. Tugwell assistant secretary of agriculture. Charged with bringing the New Deal to struggling farmers, Tugwell fathered the Resettlement Administration, an agency established in part to rectify the oversights of an earlier policy that paid farmers to let land lie fallow. That practice had benefited large, well-established farms, but for the many tenant farmers already losing ground to mechanization, crop reduction often resulted in expulsion from the land.

Tugwell recognized that the agency’s innovative relief policies, which included loans and the “resettling” of destitute farmers on desirable land, would benefit from popular support. Consequently, he created the Historical Section, the Resettlement Administration’s public information office, and chose one of his former students, Colorado native Roy Stryker, to run it. Stryker’s job was to employ the untested medium of documentary photography, publicizing the desperate condition of the nation’s farms, and highlighting the agency’s achievements.

Raised on a Colorado ranch, Stryker served in World War I and labored at hard rock mining before studying economics at Columbia University. There, Tugwell invited his exceptional student to co-author a textbook, American Economic Life. Collaborating with Fortune Magazine photographer Margaret Bourke White and child labor documentarian Lewis Hine, Stryker discovered a passion for photographs that would shape the rest of his life.

By early 1936 — just as Eastman Kodak began marketing Kodachrome  —  Stryker had the Historical Section’s darkroom functioning and was hiring photographers. Stryker’s efforts met with a good deal more success than Eastman Kodak’s. While Kodachrome’s three-dye controlled diffusion process frequently was defacing slides with a red tint or yellow stain, Stryker was setting in motion the largest and most meaningful documentary project in history, launching the careers of many of the most important photographers of a generation. The likes of Dorothea Lange, Arthur Rothstein, Walker Evans, Ben Shawn, Russell Lee, John Vachon and Marion Post Wolcott rib-rattled their way down America’s generally unpaved roads on behalf of the Roosevelt administration.

Stryker initially hired John Vachon to caption photographs, but the would-be writer soon took up a camera. In addition to his images, which stand out for their powerful sense of social justice, Vachon’s tenure at the Historical Section is notable for its length (seven years, 1936 to 1943), and for a memo he wrote to Stryker calling for “the honest preservation of the American scene,” and the “typical” rather than the “unique.” Vachon’s letters to his wife Penny have provided historians with a perceptive, achingly human and occasionally humorous look at the photographer’s life on the road.

From Butte, Montana, in March 1942 he wrote of “regretting a very abject and cowardly performance about 3:00 this afternoon.” Vachon is reproaching himself for fearing to drive the road from Wise River to Wisdom, which is “one lane bumpy full of puddles holes heavy snow and cliff hanging.” It really rankles when the attendant at the Wise River gas station tells him, “The mail stage makes it every day.”

Just as the photographers would necessarily grow in their work, so would the sphere of the Historical Section. Absorbed by the Farm Security Administration in 1937 (which scuttled the divisive “resettlement” appellation) and the Office of War Information in 1942, the Historical Section would expand its compass to include midsized cities along with small towns as the nexus of rural life and an America mobilizing for war.

Montanans would inevitably find themselves in the viewfinders of the government photographers.

Arthur Rothstein, Russell Lee and Marion Post Wolcott shot black and white between 1936 and 1941. They immortalized miners and resettlement farms, the destitute and dude ranches, Crow Fair and cattle drives, railroads, sawmills and gin mills. They shot in Montana’s major cities and most of its counties. According to Mary Murphy’s excellent Hope in Hard Times, “All of them were struck by the beauty of the country. All of them struggled with how to photograph its grandeur and subtlety.”

By 1939, Eastman Kodak adopted selective re-exposure, an accurate and reliable processing method that, under optimal conditions, resulted in slides capable of retaining their color for 100 years. The familiar 2-by-2 inch cardboard “ready mount” hit the market in April of that same year, but color didn’t come cheap. An 18-exposure slide cartridge for a 35mm camera cost a whopping $3.50, about $45 in today’s coin. Kodachrome nevertheless soon outsold Eastman Kodak’s black and white film and drove to virtual extinction its inconvenient and inaccurate competitors.

The wounds of Pearl Harbor were raw and the Depression was losing ground to the business of war in 1942 when John Vachon and Russell Lee came to Montana and shot color. Historical Section photographers were constrained, however. In addition to their relative inexperience, the expense of the new medium, and the longer exposure time required, they were bound by the need to honor the project’s documentary vision, an ethic that stressed the everyday and eschewed the sensational, contrived or exotic. One didn’t slavishly wait on the golden hour but shot Main Street in stark noonday sunlight, and took portraits despite a severe hat shadow covering a swath of a face. Put simply, the government photographers avoided any resemblance to the flamboyant, mass-market color photography of the day, the spectacle of fashion, advertising and magazine covers.

In Montana, Lee and Vachon found a state swiftly recovering from the grim years of the Depression. The New Deal had done what it could, offering low interest loans to the agriculture sector, and funding programs like the Civilian Conservation Corp and Works Progress Administration that hired the unemployed for infrastructure projects, putting young men to work planting trees and fighting forest fires. The Public Works Administration sunk millions into the state’s economy constructing the Fort Peck Dam. But Montana only began to truly hum with the return of the rains in 1938, coupled with the advent of war. Demand for agricultural products, minerals and timber surged while 1942 saw the Great Falls Army Air Base sited on the outskirts of that city. Unemployment all but disappeared as thousands gravitated to the defense industries of the West Coast and many more shipped out to European and Pacific battlefields.

More than a year before Pearl Harbor, the Roosevelt administration began calling on the Historical Section for images that would hearten the nation for a war that seemed inevitable. Photographs of erosion, soup kitchens and relief programs gradually gave way to assembly lines, bomber pilots and Rosie the Riveter. Down-on-its-luck America was eventually displaced by fresh paradigms: America the Plentiful, America the Mobilizing, America the Resolute.

The Montana Koadachromes straddle the transition from the Great Depression to World War II. Images of small and midsize towns remain, but fat cattle, a mounted shepherd, a chromite mine and a scrap metal drive speak of first class nutrition, wool for uniforms, mineral wealth and an engaged populace willing to round up metal for the sake of a battleship or tank. Montanans, the photographers assured America through their imagery, were very much on their feet and doing their share.

Editor’s Note: The Historical Section photographs are housed in the Library of Congress and can be accessed at loc.gov/pictures/collection/fsa. 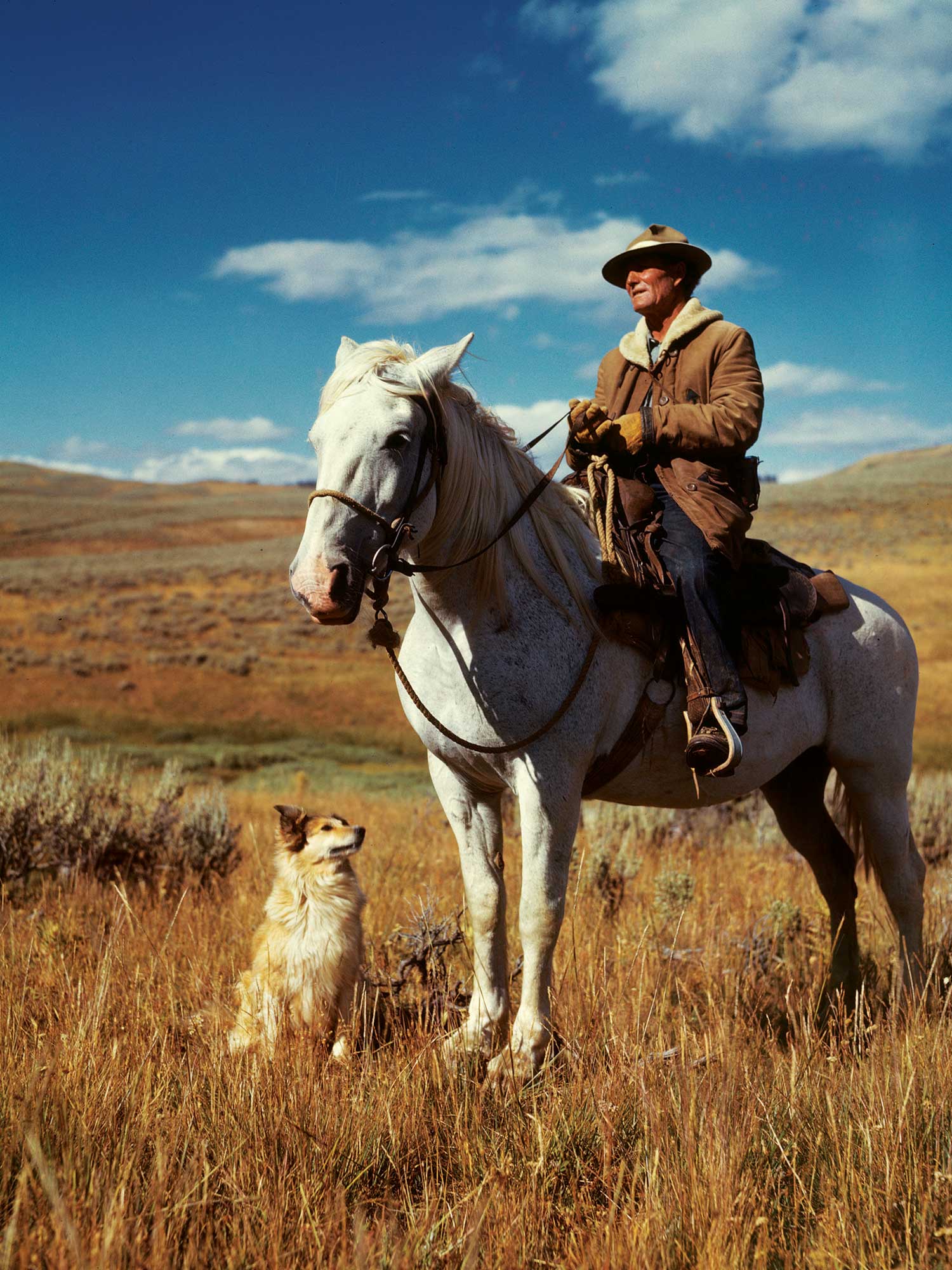 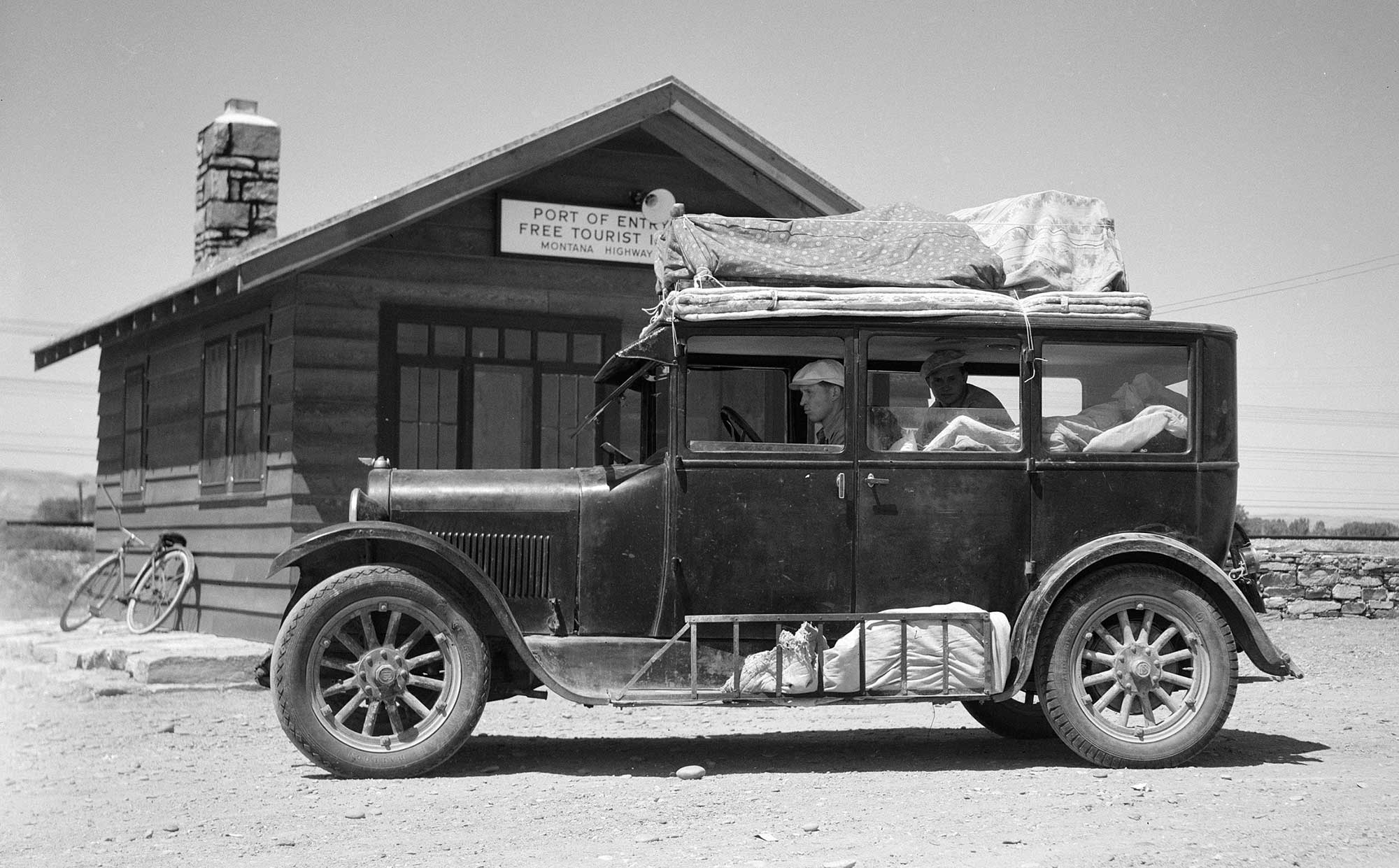 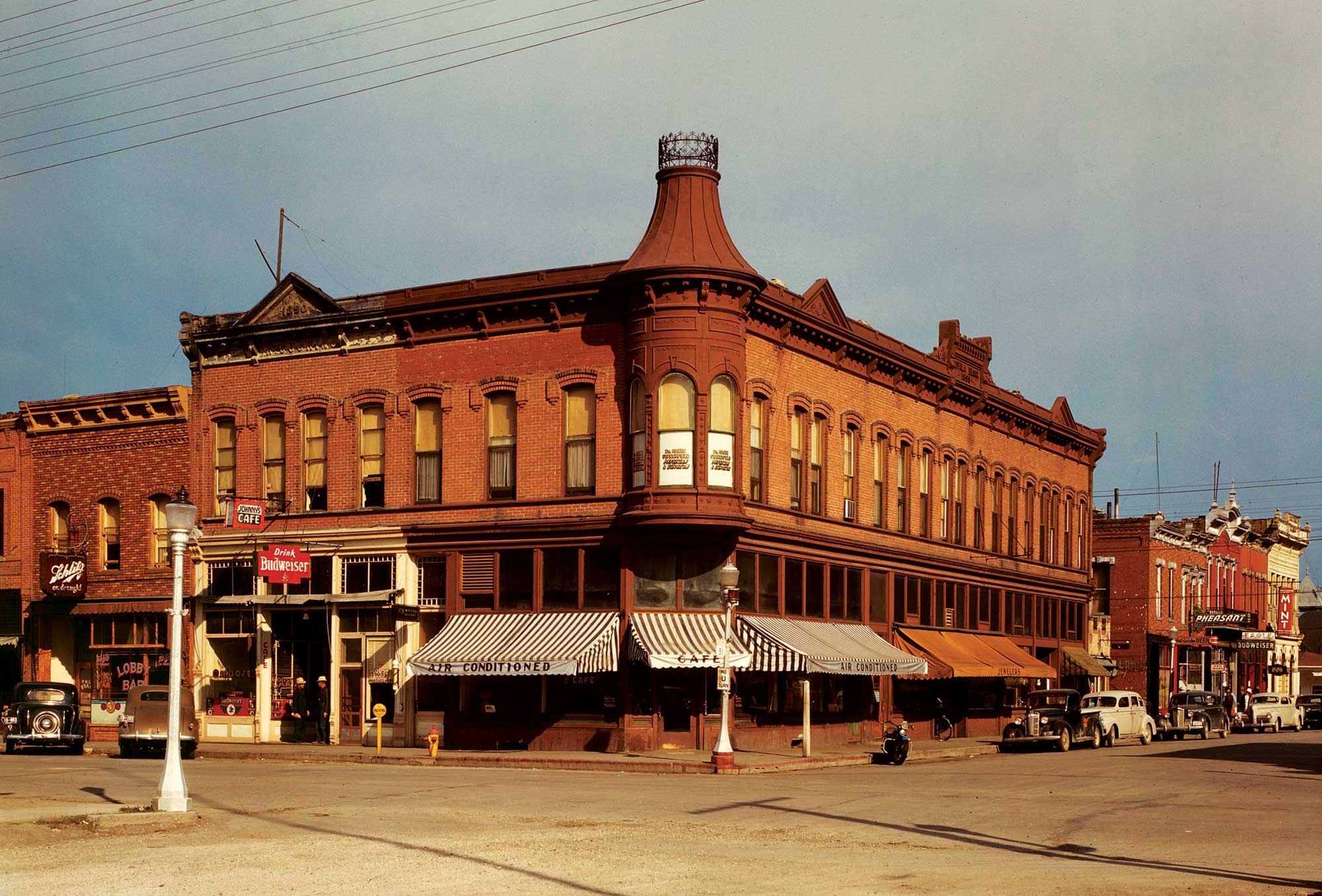 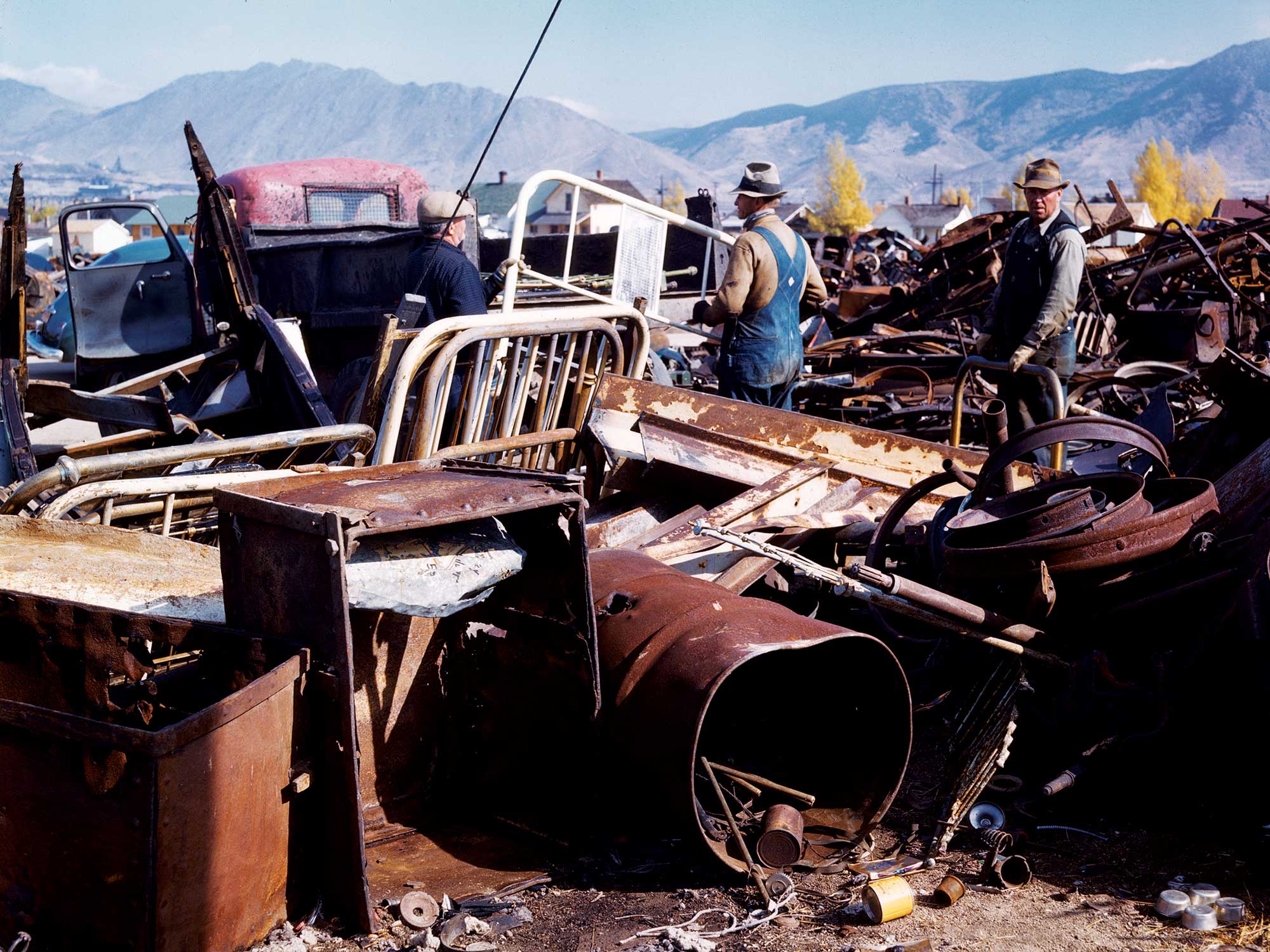 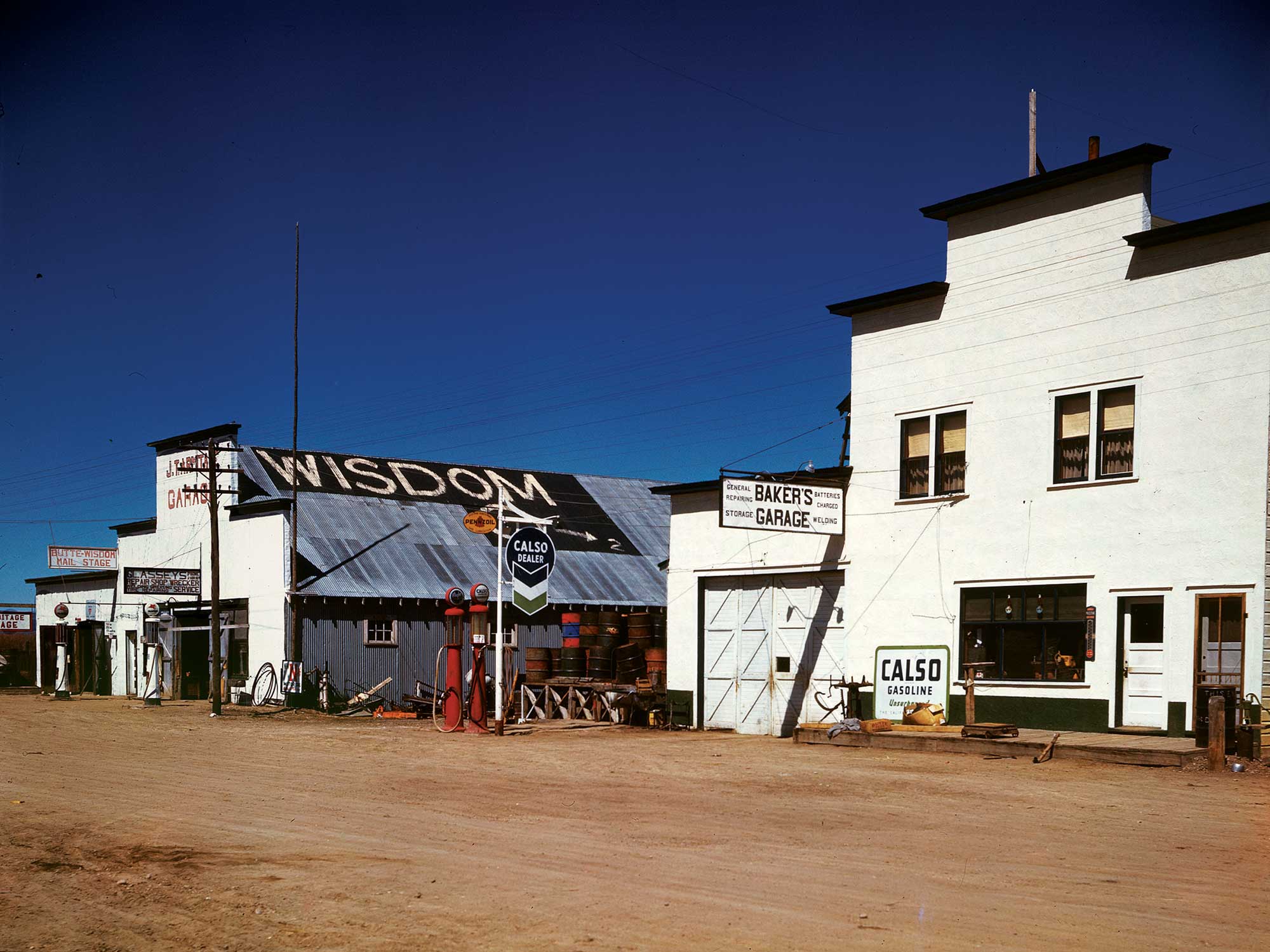 Despite his earlier “abject and cowardly performance,” John Vachon finally made it to Wisdom a month later (April 1942). Courtesy Library of Congress, Prints & Photographs Division