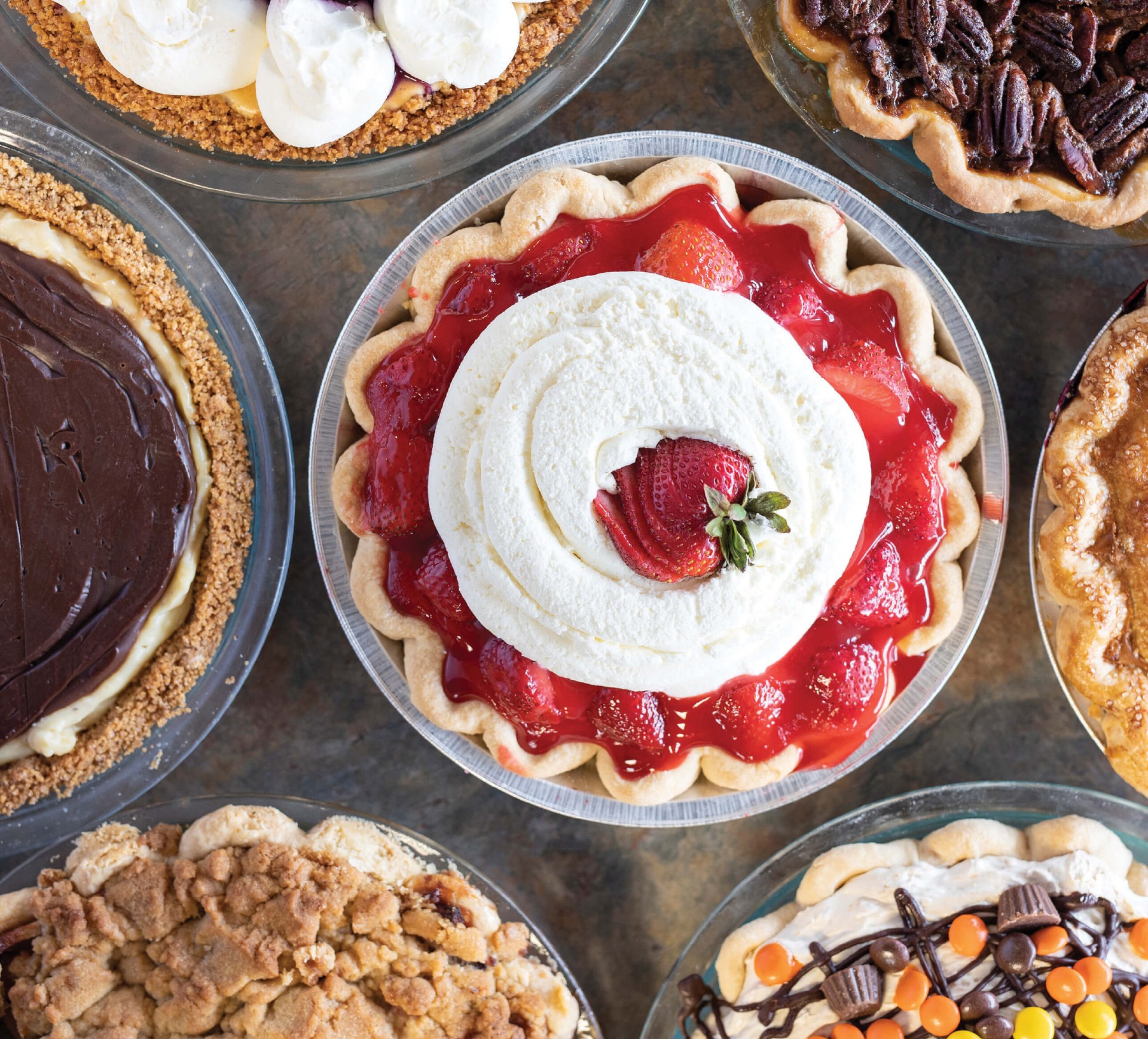 At the Iron Horse Cafe & Pie Shop, owner/baker Jamie Taylor, aka The Pie Lady, makes over 75 different pies. Here, in the center, is the fresh strawberry pie topped with sweetened cream.

28 Sep Images of the West: A Passion for Pie

I grew up watching my mother in the kitchen. She was a passionate cook who innovated beyond recipes, filling our table with all kinds of original dishes. She left behind some of her recipes, but not all. And one that I have been curious about is her homemade pie.

Skipping breakfast and throwing calories to the wind, I recently began my quest to understand — and photograph — the craft of great pie making. I started at The Western Café, “The Last Best Cafe,” a few blocks from my home in Bozeman. The baker there, Alyson Rangitsch, appears to be in her 20s, but she has answers, and wisdom: Perfect pie is not possible because “perfection is not possible,” she says, as waitresses zigzag around her. At the back of the restaurant, an illuminated pie case — the holy grail of browned crusts, bright fillings, and snowy peaks of meringue — seems to suggest otherwise. 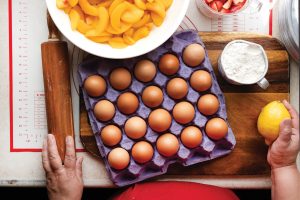 Still, Rangitsch insists, the experienced baker sees slices of pie on a shelf and knows that there are imperfections in each: “That is what makes them art.” As we sit at the bar in the diner and talk, I try to eat slowly and savor the cherry pie on my plate. “Not every pie is going to be the same,” she says. “Even if I follow the same steps for every pie, they are all unique in their own way: The crust might look different after cooking; sometimes the liquid can evaporate out of the top crusts; if you have a cherry pie, it could vary in tartness depending on the batch of cherries.” 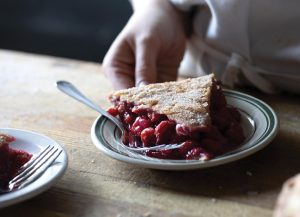 Piemaker Alyson Rangitsch’s homemade cherry pie is a classic, and a popular choice at The Western Café in Bozeman.

One time, Rangitsch made a lemon meringue pie and the meringue was grainy, but nobody knew — and they loved it. “Which kinda made me laugh,” recalls Rangitsch. “One of our cooks here said it was the best lemon pie he had ever had.” 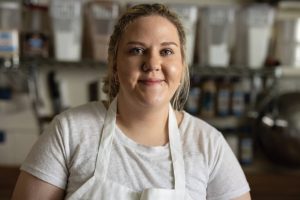 Alyson Rangitsch has been the piemaker extraordinaire at The Western Café for four years.

At the Iron Horse Cafe & Pie Shop in Three Forks, Montana, owner/baker Jamie Taylor, aka The Pie Lady, makes over 75 different pies, ranging from apple crisp to Butterfinger cream to my personal favorite (so far): bourbon pecan. She also makes themed pies, like the Halloween zombie with a hand protruding from the top. 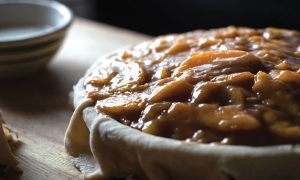 At The Western, a homemade peach pie is almost ready for the oven.

Given her use of a wide range of flavors, it is almost surprising that Taylor’s advice about making pie is to keep it simple. She cautions against adding unnecessary spices or too much of any one ingredient. There is a point, she says, where you have to let the fruit in a pie show off its natural flavor. In the case of apple pie, you want to make sure the apple gets the attention: “The apple is the centerpiece — it’s not a cinnamon pie, it’s not a sugar pie,” Taylor explains. 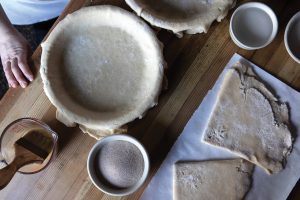 Rangitsch makes all of the pie crusts at the cafe from scratch.

People often make it more difficult than it needs to be, but that said, “the more you try new techniques and practice, the more you figure out what works best for you — a dash of humanity is perhaps most important,” she concludes. 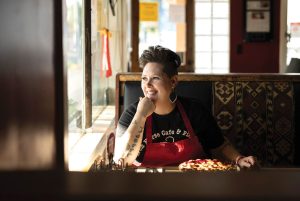 Iron Horse Cafe owner/baker Jamie Taylor has been making pies since she was eight years old, and was skilled at making a great pie crust by the time she graduated high school.

I arrive at Ma’s Loma Cafe, in Loma, Montana (approximate population of 90), road-weary and pie-ready. Greg and Maria Bouchard have owned Ma’s for almost 20 years. (They also own Pa’s across the street, where the sign advertises, “Everything you need and more.”) 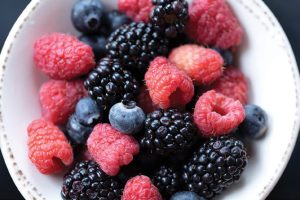 Taylor says the key to a good pie is quality ingredients.

Maria — who was born and raised in Mexico but is now an American citizen — makes all of the pies, which are the legacy of Ma’s previous owner, Peggy Allderdice. They include apple, peach, cherry, chocolate, sour cream lemon, strawberry, strawberry rhubarb, and peanut butter cream, among others. Peanut butter cream is by far the customer favorite; sour cream raisin is a close second. I order a slice of the coconut cream and, unsuccessfully, try to eat only half. 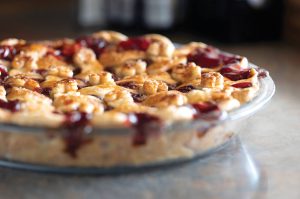 In the double cherry lattice pie, Taylor maintains the natural ﬂavor of the cherries by keeping the recipe simple and not adding too many ingredients.

Though the pies are not a moneymaker, they draw people in from all over the state. “People come from Havre, Great Falls, Helena, all the little rural communities,” Greg says. “And we get a lot of traffic from the Hi-Line.” 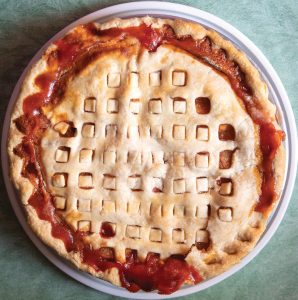 Ma’s homemade pies — such as this one made with peaches— draw regulars from all of the surrounding rural communities.

“The key to pie,” he says, “is the crust.” He’s not the first to make this proclamation so I have to ask what sets theirs apart: “We make our own lard; that’s the Mexican influence,” Greg says. “And that’s all I am going to tell you.” 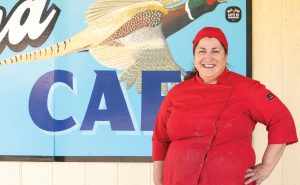 Ma’s piemaker Maria Bouchard stands for a portrait in front of the restaurant in Loma, Montana.

Though no further secrets were revealed, I was allowed access to the small closet-sized pie-making wheelhouse in the rear recesses of the kitchen. Here, Maria is a one-woman symphony, making multiple pies simultaneously. As some bake in the oven, she rolls out dough for others and mixes fruit fillings. 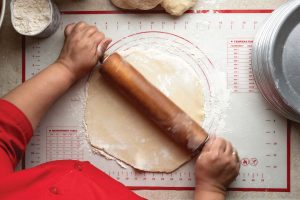 Bouchard rolls out the dough for the restaurant’s homemade pies. “The key to pie,” says Ma’s co-owner Greg Bouchard, “is the crust.”

Perhaps pie-making enlightenment lies in Maria’s parting words as I’m sent on my way with a warm strawberry rhubarb pie: “Let me know how it makes you feel.” 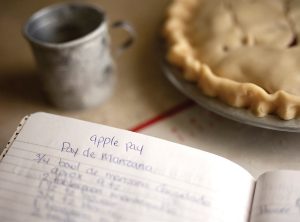 Maria was born and raised in Mexico, but is now an American citizen. Most of her pie recipes are handwritten in Spanish.