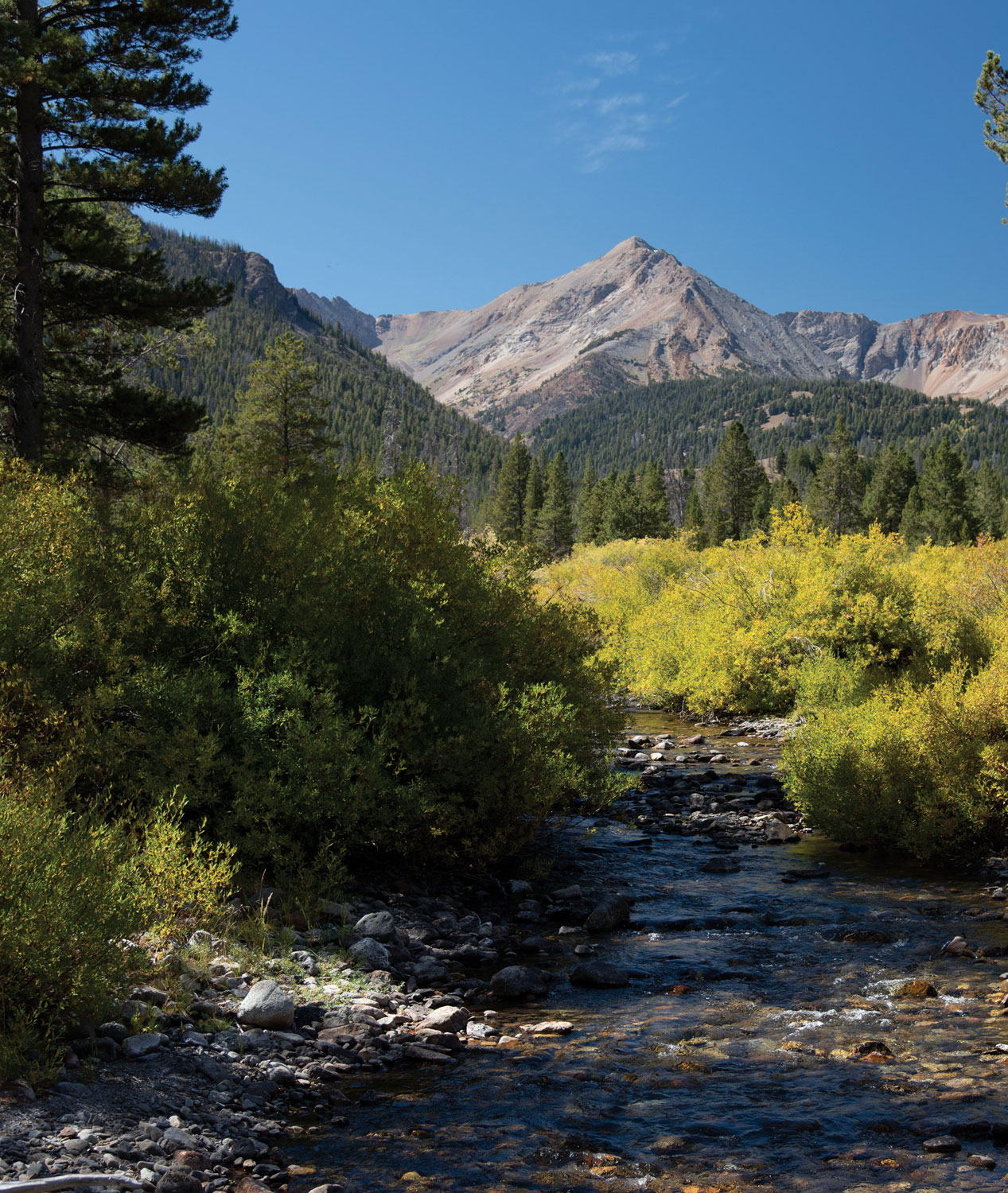 Well before it does its Houd- ini-like desert disap- pearing act, the Big Lost River’s North Fork is a sparkling mountain trout stream.

For millennia, flowing water has been a powerful metaphor in mythology, religion, and art, explaining our precarious passage down the river of life. And when once-sparkling trout streams slowly, warmly, and mysteriously slip into the earth — only to upwell transformed — perhaps they symbolize transfigurations between our conscious and subconscious minds. As the psychological spelunker Sigmund Freud observed, “The conscious mind may be compared to a fountain playing in the sun and falling back into the great subterranean pool of subconscious from which it rises.” 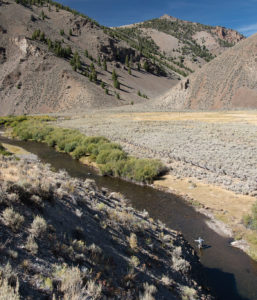 Spring creeks are often associated with porous, mineral-rich limestone aquifers, like those feeding stellar trout streams in England, Pennsylvania, the Upper Midwest’s Driftless Region, and fabled Rocky Mountain fountainheads like those in Montana’s Paradise Valley. But there’s another take on this geological template: five eccentric “sink” drainages in East-central Idaho, where mountain snowmelt gradually vanishes into vast, labyrinthine lava beds. These waters eventually morph into the Holy Grail of trout-rich springs half a state away, reborn after a long subterranean passage toward the Snake River gorge.

Getting Lost: The wild headwaters of Idaho’s sink streams

The big lost river is perfectly christened. As with four nearby, smaller trout drainages — the Little Lost River, along with Birch, Medicine Lodge, and Camas/Beaver creeks — the lower Big Lost escapes Houdini-like into desert volcanic fields south of Mackay, Idaho. In the book Roadside Geology of Idaho, authors David Alt and Donald Hyndman explain: “The Big Lost River comes bustling down out of the mountains of Central Idaho … full of purpose, as though it were a stream heading for some widely advertised destination. Then it gets to the Snake River Plain … makes a dwindling marshy loop, and abandons all hope as it disappears into the porous basalt flows.” 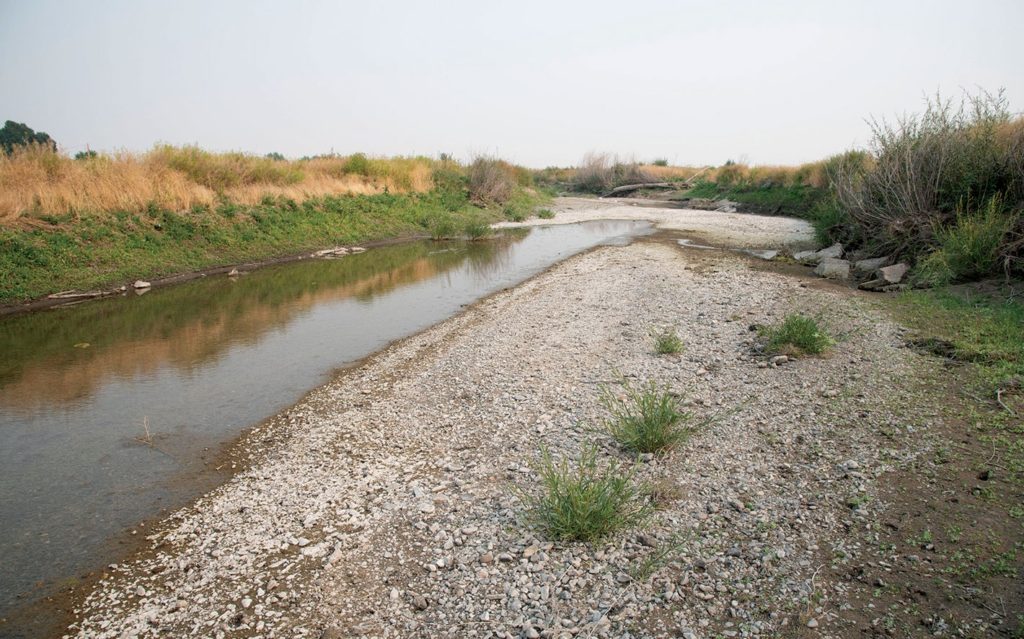 The Big Lost River vanishes into the ground near Arco, Idaho. The exact location depends on seasonal variations.

Like Great Basin creeks disappearing into mirage-like playas, locations of the sink streams’ torpid dissipations vary according to snowpack, seasonal flows, and irrigation demands. Upstream, however, the sink streams offer a sprawling, rugged landscape where adventurous fly anglers can also get lost, far from cell phone service and the news of the day. 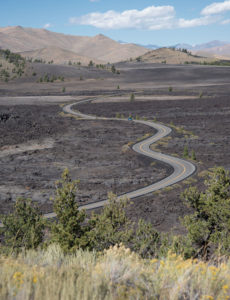 Ancient volcanic rubble in and around Craters of the Moon National Monument provides a porous conduit for the “lost” sink stream water, as it travels more than a 100 miles southwest under the Snake River Plain.

The Big Lost’s fertile tailwater below Mackay Reservoir — among the West’s most productive fishing waters — draws considerable attention. The nutrient-rich river sprints under cave-pocked cliffs, with boulders, giant logs, and deep pools providing cover for about 3,500 rainbow trout per mile. The state manages a pair of access points below the dam, both offering streamside camping. The football-shaped, 20-plus-inch trophies in this popular reach can demand match-the-hatch acumen, as they observe an armada of flies.

Upstream from the reservoir’s also-productive fishery, it’s a different story. The river fractures into enticing tributaries and springs, draining the Pioneer, Boulder, White Knob, and soaring Lost River mountains. Lording above everything like an antediluvian Egyptian pyramid is the 12,662-foot Borah Peak, Idaho’s highest.

The Old West still thrives here: In the mountain-rimmed Copper Basin, elk, pronghorn, and moose roam, horseback cowboys move moaning livestock during the fall roundup, and decaying frontier remnants inspire curiosity. Amid the ebb and flow of Native Americans, trappers, miners, and ranchers, upper sink stream flows have been a wellspring of life for humans and wildlife alike, while ephemeral artifacts — nearby mines, mills, and towns — faded. Features that seemed vital and enduring washed up on a swelling tide of speculative optimism, then slowly decayed with shifting political and economic currents. 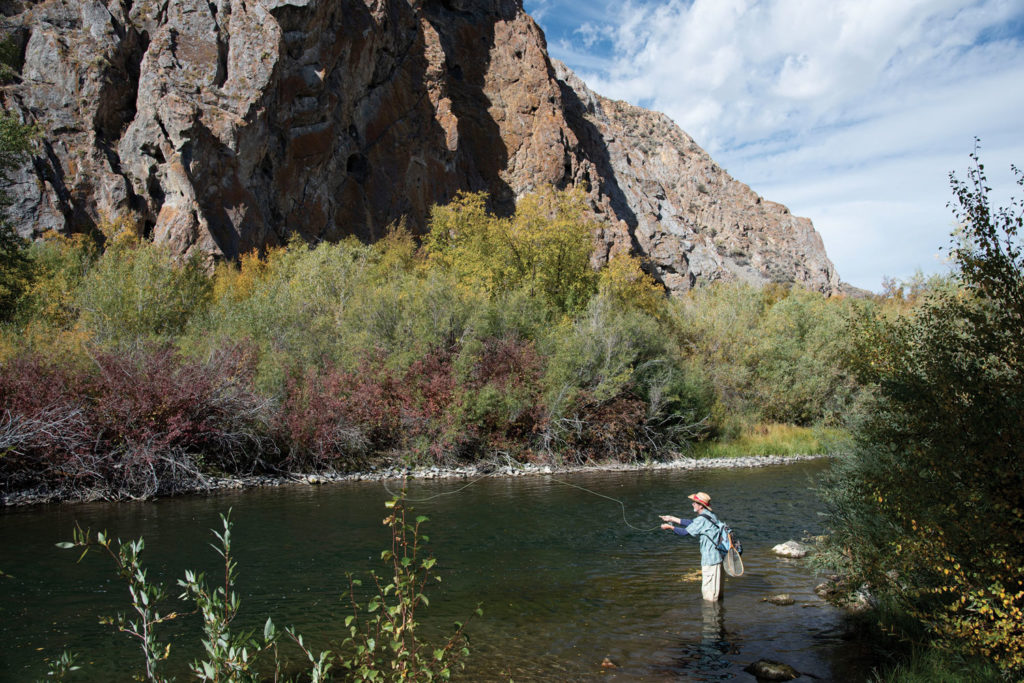 The Big Lost tailwater below Mackay Reservoir is among the most productive and challenging reaches in the Northern Rockies.

Upper Big Lost water is varied, winding through pine forests, willows, and sagebrush meadows, interrupted by iterations of beaver ponds. Anglers on horse or foot reach isolated alpine trickles and gem-like lakes tucked in the watershed’s highest reaches. The other sink watersheds are lesser known, but also offer room to roam. The next drainages to the east — the Little Lost River and Birch Creek — rise in lofty, secluded valleys fed by the 10,000-foot peaks in the Lemhi and Beaverhead ranges. Enhancing the allure is an oceanic tableau offering miles of public access and primitive campsites. Narrow upper sink streams fit perfectly with feather-light wands, short leaders, and tenkara gear. Typically there’s little need to mimic bugs with fancy Latin names: From midsummer into September, terrestrials and attractors are rock stars. 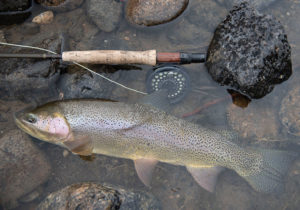 This 18-inch cutthroat was taken on a size-20 blue-winged olive during an early season winter storm.

Tending a Big Lost campfire while the setting September sun bleeds watercolors into a canvas of clouds above the soaring Lost River Range, I ponder this: How did trout reach the sink watersheds, given the impossibility of navigating dry stream beds upstream from ancestral Snake River habitat? Certainly trout have been stocked for decades, like the non-native brookies and browns now thriving in portions of the drainages.

Distribution of native trout in disconnected sink streams is debated among biologists, given that they lacked surface connections to other drainages for thousands of years. According to an interagency fisheries study, “It is unclear which species of fish were native to the Lost Streams … authors disagree as to which species are native and how they were established.” 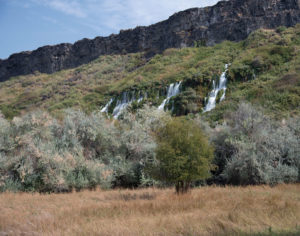 After taking nearly two centuries in its subterranean journey, Mini Miller Falls is one of the best preserved fountainheads in the Snake River gorge, part of the Ritter Island Unit of Thousand Springs State Park. Providing habitat for rare species, the spring gushes forth at a trout-friendly 58 degrees.

Biologist Robert Behnke’s treatise, Trout and Salmon of North America, shows the original distribution of Snake and Yellowstone river cutthroats stopping short of the Big Lost. And while westslope cutts and rainbows are native to the Salmon watershed to the north, they may never have made it to the Big Lost or other sink streams on their own.

After happily hiking back to my Big Lost camp one day, I ponder my own meditative, road-tripping disappearing act, and a passage resonating from Backcountry Roads, Idaho by Lynna and Leland Howard: “Being truly alone is different, an experience so far removed from day-to-day life most people don’t know they’ve lost it. … Then something happens that you had forgotten was possible. … Your whole self, your idea of yourself, will uncurl like a fist relaxing. A tight fist you didn’t know you were holding loosens, and you can be as big as the emptiness, as small as nothing. You can matter or not. … You’re boundless for the time you are there.”

Catching a wild trout is revelatory, briefly pulling the veil back on otherwise unfathomable, watery depths. Idaho is blessed with a queen’s ransom of iconic streams to accomplish this, but constellations of alternatives lurk beneath marquee names like Silver Creek and the Henry’s Fork. Among these are unique spring-fed creeks and ponds around Thousand Springs, on the north side of the Snake River Canyon near Hagerman, below Twin Falls. One needs to channel the proverbial curious cat with nine lives to explore all this wonderful water. 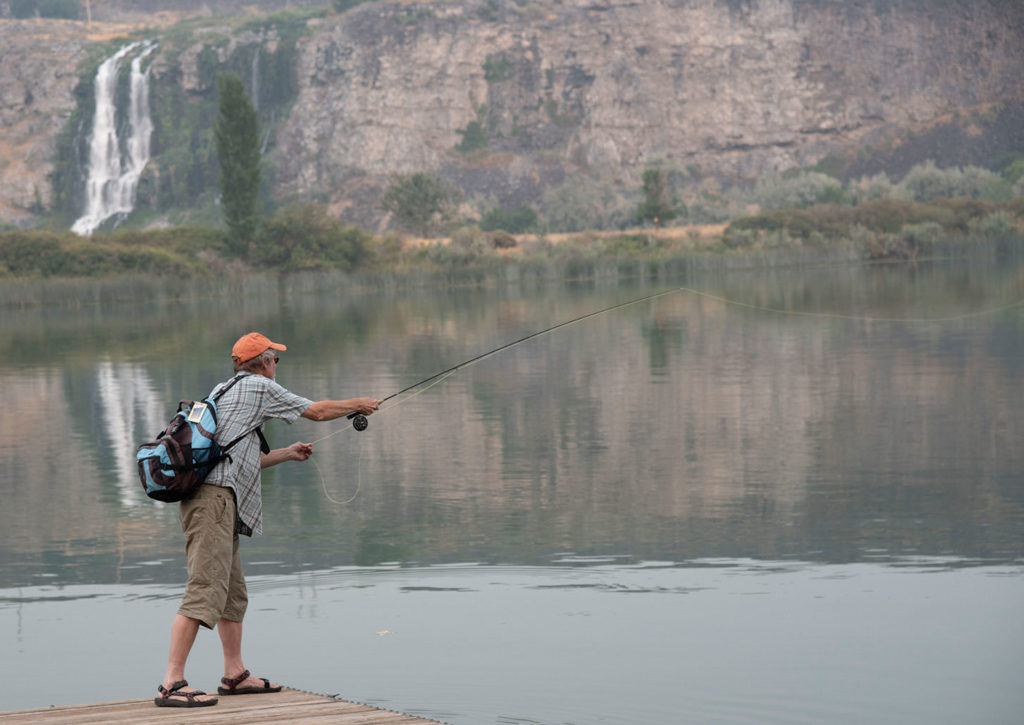 The broad Snake River in the Thousand Springs gorge, once home to prodigious runs of steelhead and salmon, holds multiple species today, including brown and rainbow trout, bass, carp, and prehistoric sturgeon.

Historically, Thousand Springs’ native fish included resident redband rainbow trout, and massive steelhead and Chinook salmon runs ascending the Snake up to Shoshone Falls. Paiute, Bannock, and Shoshone tribes feasted on this seasonal bounty, now decimated by downstream dams. Today, fly anglers focus on rainbow and brown trout in the creeks; mixed trout, bass, and panfish in valley ponds; and trout, bass, backwater carp, and other species in the Snake River. Areas where springs enter the Snake are mixing zones where anglers might encounter nearly anything, including trophies. Primitive, dinosaur-like native sturgeon up to 9 feet long persist here too. Thousand Springs’ fisheries are so diverse that anglers must gear up according to their quarry: for example, midges, scuds, and Trico spinners for trout; deer-hair mice, and marabou leech patterns for bass; and smaller, leggy foam bugs for panfish. 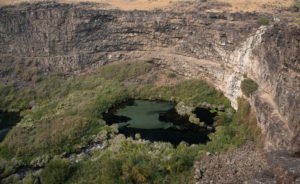 Hardcore anglers can easily leave plenty undiscovered, and many don’t partake in the myriad hiking, paddling, and birdwatching opportunities. Among the best places to start an adventure are the five discrete units of Thousand Springs State Park: Some of the most accessible fishing is at Niagara Springs and Ritter Island, the latter an historic dairy farm originally purchased by The Nature Conservancy and home to rare, spring-dependent species. Billingsley Creek’s slow, sinuous spring water is best approached with a canoe, kayak, or float tube. Malad Gorge and Hardy Box Canyon afford solitude but are challenging to reach because of steep walls carved by cataclysmic ice age floods. The productive Malad River is more easily fished lower down, near an Idaho Power generation station and its Snake River mouth.

While the north rim of the Snake Canyon produces icy water, the south side is noted for hot springs. Joined by my wife, Mary, I luxuriated at a rustic resort that — in addition to private, sybaritic hot pools — offers docks, cabins, and campsites on the Snake River. Vistas across the aptly named Magic Valley mesmerize: soaring pelicans, ospreys, and golden eagles framed by frothy springs cascading down distant, castle-like cliffs.

Around our campfire, I reflect how springs — hot and cold alike — were often an elixir that Native Americans from different tribes shared peacefully. I’ve always been magnetically drawn to springs, too, like the Snake’s caddis flies swarming our Coleman lantern. As Ted Leeson wrote in his memoir, Jerusalem Creek: “Every existence has its pulse points, those places where life rises somehow closer to the surface and makes itself more sharply felt. Spring creeks have been mine. Like a revelation or like a wound, they have more immediately registered the heart of things.” As with the mystical Fountain of Youth, disappearing rivers, hidden aquifers, and fecund springs revitalize an aging sense of awe, wonder, and mystery that can erode with the prosaic passage of days, the accelerating rush of years. 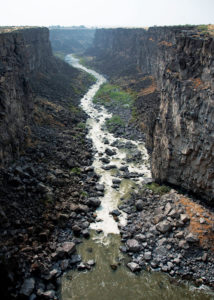 The lower Malad River is bolstered by high volumes of spring water that enter the gorge and create excellent trout habitat above the Snake River.

The heaviest oar strokes in our navigation of time occur silently, surrealistically beneath the surface, in the deep rivers of the subconscious mind. According to scholars of myth and humanistic psychology, like Joseph Campbell and Carl Jung, it’s also the realm of the collective unconscious, a shared dream world populated by timeless stories, archetypes, and questing heroes that resonate, reaffirm, and inspire. It’s our universal software, a well of insight, intuition, and renewal.

In the enigmatic catacombs of our shamanistic subconscious, we ponder good and evil, and the inevitable, inscrutable passage between life and death. In ancient Greek mythology, the underground River Styx was a portal to the netherworld, a border between the shadowy land of the dead — Hades — and the colorful, vibrant, earthly realm of the still living.

Poking the dying embers, I ponder the Milky Way, raise a final bourbon toast to the beauty that remains, and join Mary in our peaceful, tent-sheltered dream world. I recall an artistic manifesto that Jack Kerouac declared in a 1950 letter: “I want to work in revelations, not just spin silly tales for money. I want to fish as deep down as possible into my own subconscious in the belief that once that far down, everyone will understand because they are the same that far down.”