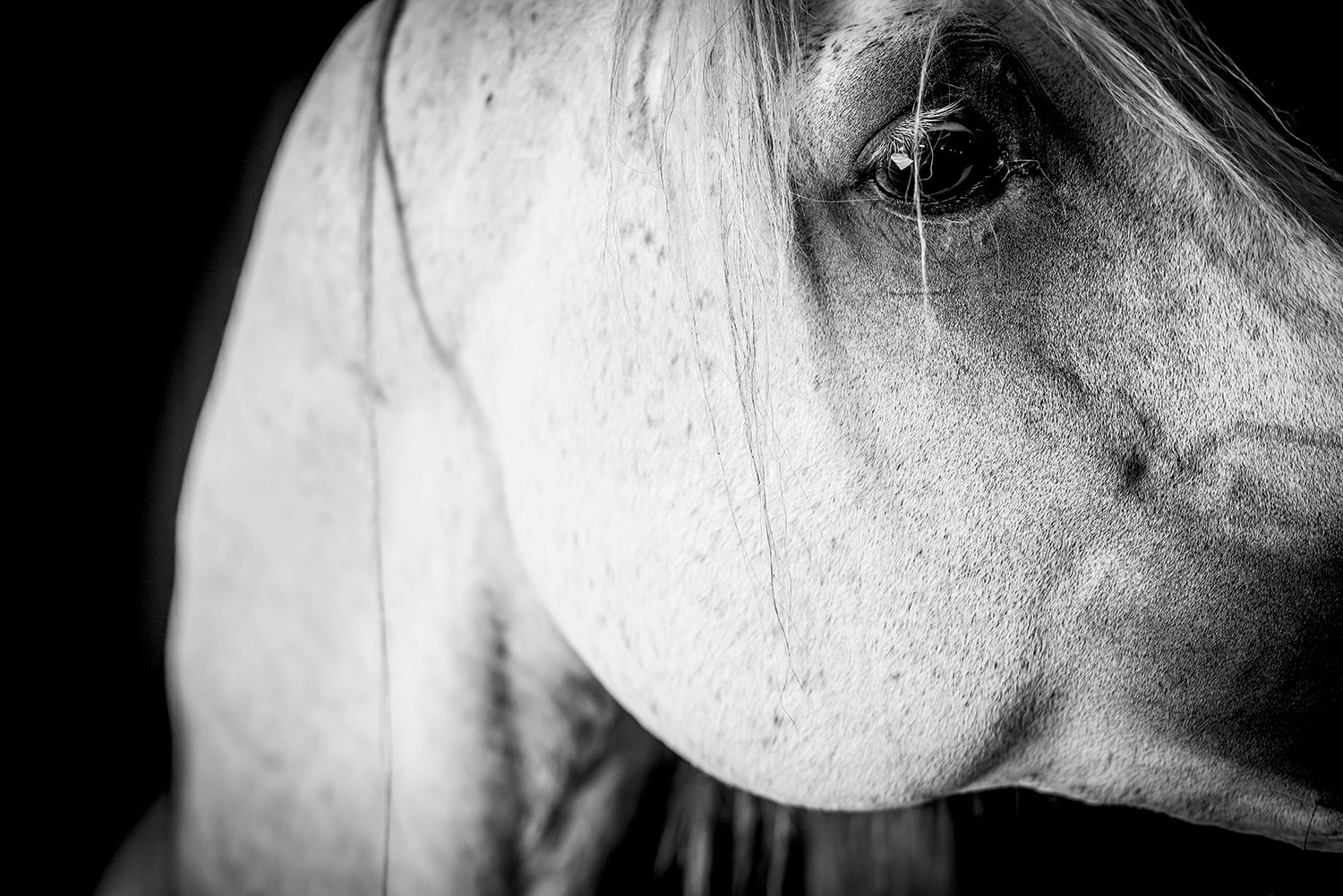 THEY’RE FAST, ELEGANT, SENSITIVE, AND STRONG, with wild manes and tails that touch the grass. At times they seem otherworldly, mythological, like the four-legged inhabitants of fairy tales. Yet here they stand, living among us, helping with the most practical of endeavors while offering emotional sustenance, too. Many people have yearned to possess one. For those whose yearning remains unfulfilled, a question circles the arena of the mind at a steady lope: How do you capture a horse? For this trio of artists the answer is: with a camera.

“The barn was my second home as a child, all the way through my teenage years,” recalls Louise Johns, a Bozeman, Montana-based photographer who inherited a love of horses from her mother. “Given my personal experience growing up with horses, I’m interested in the ways that other women have been shaped by them.” “Bold Women” Bree Morrison rides her horse, Shasta, in the Centennial Valley of Montana. As a range rider, her daily rides at dawn and dusk mitigate cattle conflicts with predators, namely grizzly bears and wolves.

Rooted in contemporary realities and in the West, Johns’ images of women and horses have a strong specificity with regard to time and place. They depict a symbiotic relationship that began in Central Asia nearly 3,000 years ago and is still very much alive in this region. “Here, horses are integral to the lives of people who live and work on the land,” says Johns, who grew up in Virginia. Back East, she recalls, “I was used to horses being monitored closely, living in stalls, and restricted to small pastures. There is an element of freedom with the horses in the West, living in these large, vast landscapes.” “A Good Day’s Work” Andrew Anderson, cow boss and manager of the J Bar L Ranch in the CentennialValley of Southwest Montana, bridles his horse.

Johns’ images express the bonds between women and their horses, which feel both down-to-earth and transcendent. “I want my pictures to reflect naturally occurring moments. So most of the time, I just follow people as they live their everyday lives and try to be as non-intrusive as I possibly can. When I make portraits, I want to reveal a connection.” The clothes, tack, and trucks in the photos are modern, but the gestures and expressions feel appealingly ancient. A woman’s face is both serene and alert as she rides her chestnut horse through grass that looks gilded, her dog watching from below, her cheeks aflame in the glow of the rising sun. “The light is key in conveying feeling in the photographs,” says Johns, “so I almost always take the portraits early morning or late evening.”

The light isn’t all that’s natural in a series that’s bracingly free from artifice. Whatever the differences in their internal worlds, the women seem at home in the external, natural one — thanks in part to the horses that serve as intermediaries between both realms. “There’s been so much pressure,” notes Johns, “especially on women and girls, to look and act a certain way, and I am interested in what makes people let go of all the things they think they need to be. I’m interested in trying to capture moments that reveal the true essence of a woman or girl, and the horse tends to bring that out. This might be the most powerful lesson the horse can teach us — to be ourselves.” Johns is represented by Old Main Gallery in Bozeman, Montana.

“I’ve been drawn to horses since I can remember,” says Audrey Hall, a Livingston, Montana-based photographer. “My dad used to pack us up in a station wagon to spend summers in Montana when I was young, and we would go to my family’s ranch in Brazil for winter breaks. My first memories from both places are the fancy show horses on the Fazenda Santa Maria and other neighboring ranches in Brazil, and the hearty pack horses going into the wilderness around Yellowstone. The breeds were very different, but the spirit was very much the same: stoic, curious, strong.”

Hall’s equine series conveys not only the animals’ stately power, but also their tenderness. A sense of softness lends some of the photos a tactile quality, and inspires an urge to reach into the images and stroke a glossy flank, velvet muzzle, or tangled tail. Close-cropped photographs draw the eye to details — the curve of a back, a feathery cluster of eyelashes, strands of mane — that become more beautiful for their immediacy. Presence takes precedence over place. “So far,” Hall explains, “my equine series doesn’t have a lot, if any, location context. I’m aiming for more of a visceral experience.” Achieving that viscerality is a fluid, exploratory process for Hall. “I’m usually thinking about how the piece may look and feel on a wall, and then I work backwards,” she explains. “But most of the time there are so many unpredictable variables, I end up working from both ends toward the middle.” She’s been inspired by a variety of horse imagery. “Blue Horses by Franz Marc. … I remember seeing that painting with my family when I was 13. I don’t remember much else from the museum! I also loved the opening sequence of ‘The Horse Whisperer,’ filmed by cinematographer Robert Richardson. It’s a magical, abstract sequence, and it gives me chills every time I watch.”

Like all artists, she spends time in that nebulous state where interior imaginings are transformed into external realities that might be shared with others — though not always as precisely as she predicts. “Sometimes it’s frustrating because I can’t seem to achieve on paper what’s in my head, but if I keep working, sometimes I’ll get a lovely surprise.”

That sense of surprise is contagious, as Hall’s images inspire viewers to look deeper, consider longer, and see the horse anew. “I aim for resonance,” she says. “I look for certain qualities of light and texture. Capturing emotional context is essential. If all those elements come together in one image, I’m happy.”

Hall is represented by Stapleton Gallery in Billings, Montana, and Visions West Gallery in Livingston, Montana. “He was the equestrian love of my life,” says Isabelle Beau de Loménie, a Cody, Wyoming-based and French-born photographer. She’s recalling the equine companion of her youth, a French riding bay named Ispan who was small in stature but large in heart. Her connection with Ispan and its deep emotional impact led her to become a horse portraitist — though she isn’t, as she puts it, “chasing a ghost. I truly loved him indeed, and he clearly is, for many reasons, at the origin of my work. But Ispan also belongs to another period of my life, and a very melancholic one. As a teenager, I was not thinking about being a photographer, but a painter.” Some of Beau de Loménie’s images have a painterly quality — in her Série Bleue the horses are partially tinted with a dreamy azure hue. More notable, though, are the gestures she captures: They’re so fleeting, so electric, it seems almost a miracle that they were caught by a camera rather than coaxed out of the imagination via paintbrush. “Most often, while shooting a horse, I know something is happening,” she says. “But it’s only at the moment of looking at the picture that I take the full measure and potential of the photograph. And I feel like it’s a gift from the horse.”

She appreciates the ways her equine subjects not only distinguish themselves from Ispan, but from each other. “I never forget that they [each] have their own personality and nature. And this is what I love the most while working with them: discovering who the horse is that I am facing. Some of them seem to be absolutely fascinated by what I am doing, as well as by the camera, and sometimes I swear they are posing. Some others,” she observes in a respectful and good-natured tone, “are incredibly disdainful. I feel like they just deliberately ignore me and that I deeply bother them!” Beau de Loménie’s Equus Series is breathtaking in part because the strong kinetic quality generates emotion in the viewer. Seconds that would usually flicker by unnoticed are stilled to startlingly beautiful effect. “I work as often as possible while the horse is in movement,” she explains. “The idea is shooting in a fraction of a second to catch a position — a bearing, an attitude — that the horse may never reproduce. This requires that I take my time and be very patient in order to catch, in a glance, something which may be very fast and, above all, unique.”