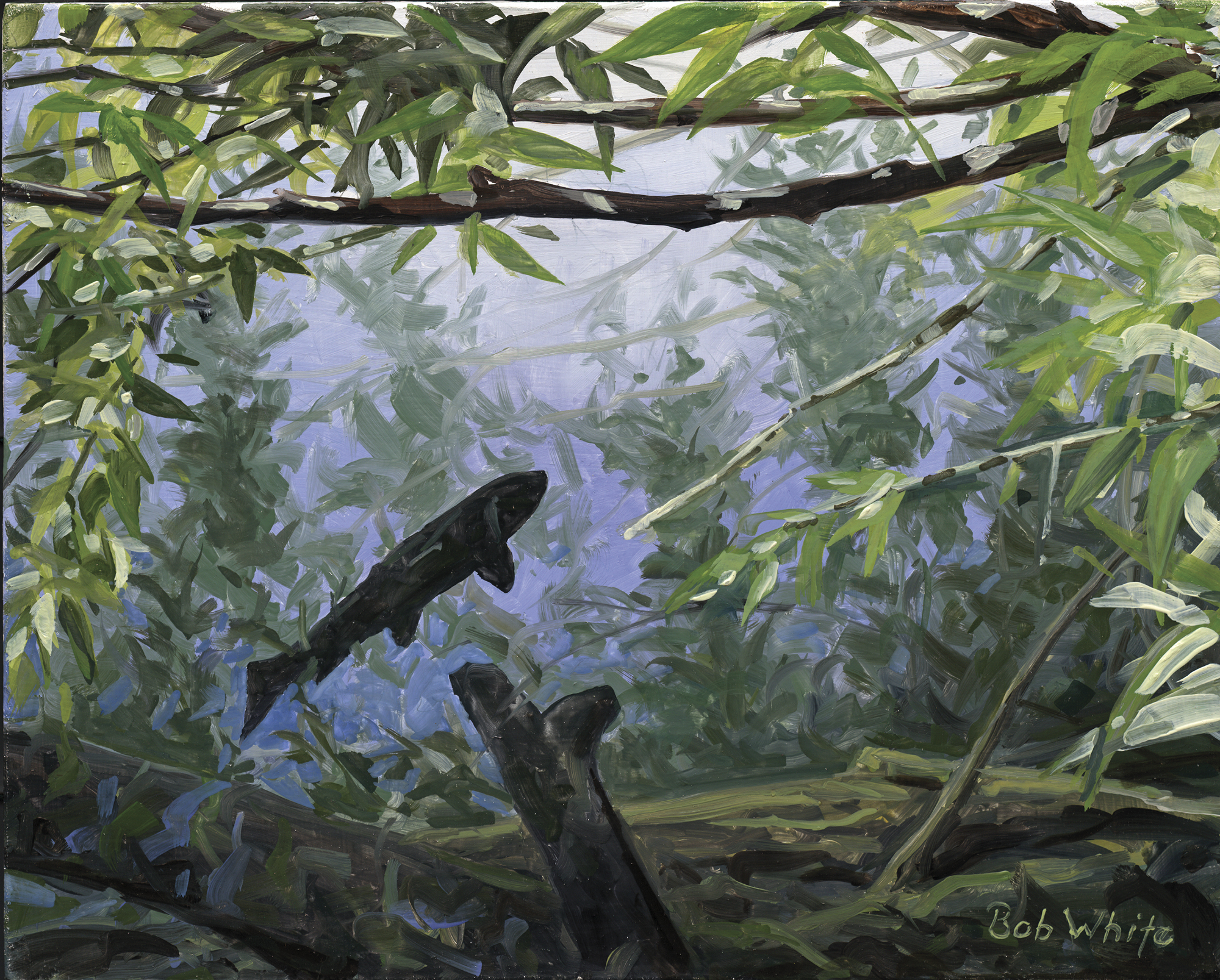 SOMETIMES, DAYDREAMING ALONG A HEART-WRENCHINGLY BEAUTIFUL trout stream — where even the slightest bend of the current around a small rock seems to have a magical light about it — I have a hard time believing that fly fishing can’t operate on some pretty rarified levels. On those days, my line rolls out there and moves through the beauty so, well, beautifully, that a loftier reward system seems in order, in which things like sincerity and hope matter as much as skill and discipline.

Let’s run with that thought for a moment. After a long stretch of disheartening fishlessness it is especially nice to imagine that trout aren’t just waiting there, but are actually brought into being for an angler who, incurable shortcomings aside, is right then so deserving that the river bestows a trout for finer reasons than mere expertise. Perhaps until that moment the trout exists only as an undifferentiated slip of current, but when the angler crosses some mystical threshold of worthiness the slip suddenly gathers the fluid brilliance of the stream into something firm and lithe that flashes into life and rolls eagerly up to the fly. Wouldn’t it be exciting if that was really what happened, even just once in each angler’s life?

It is a testament to the variety of intellect, motivation and personality among fly fishers that some of them will read the foregoing with condescending pity for any poor soul who succumbs to such a desperate fantasy. But other readers might say, yes, I think that’s happened to me, too — or at least I remember a day when I wanted to believe that it could.

My day, I was standing in a stretch of the Madison known locally as the Grasshopper Bank. I was casting a PMD across contrary intervening currents and weed beds to where I thought I saw a fish rise.

There were no other fishermen in the water, but along the far shore there was a man in a big pickup truck watching me fish. In my experience, an audience further guarantees failure, but I tried not to blame him.

The trick in this spot was a long drift. Eventually I managed a good cast and the fly lit at the head of the several-yards-long-by-10-inches-wide strip of smooth water. It drifted, drifted some more and then some more. The currents and weeds between me and the fly had a fine time eating up the slack line I’d thrown them, so I began to reach awkwardly to my left, extending the rod farther and farther downstream to give the fly just a few more inches of freedom, then a few more.

When the fly was several feet past my expectations and well below where I’d spotted the rise — and just as I was about to topple over into the water — a trout sucked it down with satisfying conviction. The man in the pickup truck let out a commendatory whoop, and all that was left was choosing among my cheery options for why I caught the fish.

First, it wasn’t beyond the realm of possibility that this was merely a case of competence. Maybe I made such a good cast with such a good fly that I earned the fish the old-fashioned way.

Or maybe it was my persistence. My heroic near-drenching — as I reached and reached and reached some more, and then even more, to keep the fly drifting honestly way beyond normal expectations — might have brought the fly into the view of some fish I hadn’t even suspected was there.

Or maybe the credit really belonged to that guy watching me from his truck — the inspiration of a good audience silently cheering me on. After all, I could hardly let myself look like a complete duffer while some absolute stranger who I would never see again was watching, right?

But it didn’t feel like any of those things. It felt like something momentous had just happened. The elation of the reward was all out of proportion to what I had just witnessed. It felt like there wasn’t a fish and then there was.

So maybe just this once I’ll at least entertain the alternative of the materializing trout. As an ardent reader and defender of science, I know what makes sense. When things get complicated I tend to lean pretty hard on empiricism. But on those rare occasions when I do catch a trout, they are such a surprise — such an act of participatory fiction — that I’m not above entertaining other possibilities. Sincerity has always meant more to me than skill anyway.