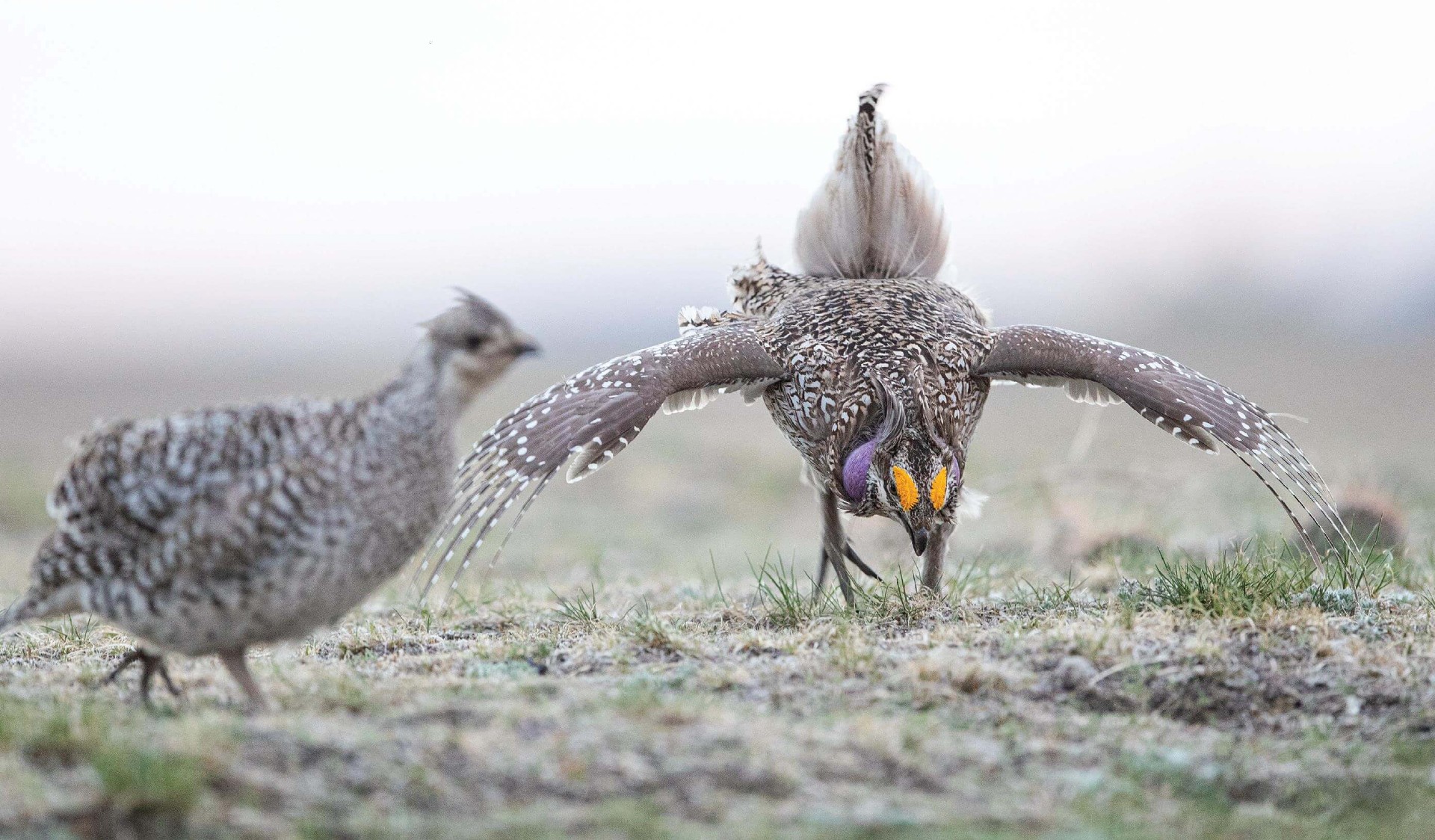 A lekking male sharptail bows and shufﬂes his feet while attempting to impress a hen, with little evidence of success. Lekking hens like to play hard to get.

This morning, the prairie is treating us to a Homeric sunrise as dawn begins to spread her saffron robes across the eastern sky. The time is late March, the place a remote corner of central Montana’s sagebrush steppe, and Lori and I are here to witness a special event. While scouting the previous afternoon based on information from our local Montana Fish, Wildlife & Parks (MT FWP) biologist, we located an acre of flattened grass littered with feathers and bird droppings — reliable indications of a sharptail grouse lek. Now, we are crouched down in our portable blind, shivering against the early morning chill, fiddling with cameras, and hoping we’re in the right place. 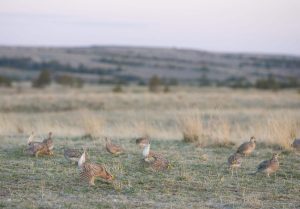 Just as the sun crests the horizon, strange cooing sounds begin to fill the air and gray, chicken-like birds arrive from all directions. While the males stand erect and alert, the demure females flatten down inconspicuously, allowing their natural camouflage to render them practically invisible. Then, the males begin to strut, bowing courteously, extending their wings, pivoting, and shuffling their feet in what can only be described as a dance. The hens’ disinterest reminds me of a junior high social event, with all the girls backed up against the wall hoping none of the geeky boys singles them out for attention.

Biologists refer to this activity as a “lekking,” and the term references both the location and the whole intricate courtship process. Among Montana gamebirds, lekking behavior is limited to open-country grouse: sharptails and sage grouse. Farther to the east, true prairie chickens display similar behavior. (In central Montana, locals often refer to sharptails as “chickens,” although they are a separate species.) This behavior seems adaptive, given that, in open terrain, visual cues are more effective than sound at attracting attention, in contrast to the hooting and gobbling by woodland species such as dusky grouse and wild turkeys. 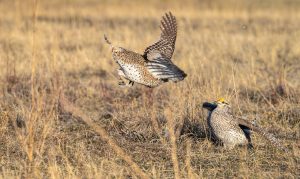 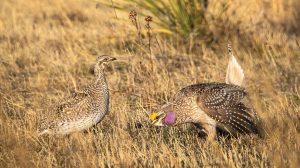 The ritual may seem bizarre, but it will serve nature’s purpose. Sometime over the course of the next several weeks, the hens will become receptive and breed, ensuring the survival of one of Montana’s iconic wildlife species.

In an embarrassment of riches, Montana is home to five native grouse species, most of which enjoy stable populations and habitat. This is certainly true of our three “forest” grouse (ruffed, spruce, and dusky), which inhabit wooded areas relatively untouched by human development. Unfortunately, one of our open-country species — the sage grouse — has not fared as well, largely due to fragmentation of the expansive, continuous sagebrush habitat that it needs to thrive. This has led to years of controversy, as our largest grouse flirted back and forth with listing under the Endangered Species Act. The sharptail (Tympanuchus phasianellus), whose numbers present a paradox, boast stable and healthy populations in eastern Montana, while sharptail numbers west of the Continental Divide have collapsed. 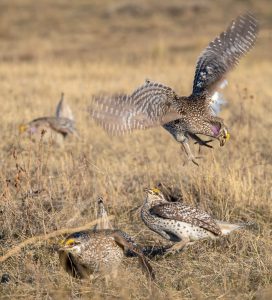 This sharptail lekking in central Montana may soon contribute its genetics to reintroduced populations in western Montana. Photo by Don & Lori Thomas

Sharptails’ original presence has been well documented for hundreds of years, beginning with that unfailingly helpful source, the Lewis and Clark journals. On September 12, 1804, in what is now South Dakota, Clark observed large numbers of grouse on the prairie. The explorers were careful to note the difference between these birds and the true prairie chickens they had observed earlier, for Lewis wrote that these “Sharpe-tailed Grows” (his journals practically beg for spell-check) had a pointed tail with “the feathers in its center much longer than those on the sides.” This was the first written description of the subspecies now known as the prairie sharptail. In what is now Oregon, on March 1, 1806, after surviving a brutal winter on the Pacific coast, Lewis described a second, similar subspecies known today as the Columbian sharptail — once thought to be native to western Montana until recent science proved otherwise.

While much of the forested terrain in that part of the state is not good prairie grouse habitat, populations were historically present in the Blackfoot, Bitterroot, and Flathead valleys. Biologists assumed that these were Columbian sharptails, since that was the subspecies populating Idaho, Washington, and Oregon. Biologist Ben Deeble challenged that theory in the 1990s, while working on his master’s thesis at the University of Montana. His studies showed that western Montana sharptails were genetically identical to those east of the Divide.

Despite five years of surveys and searches in the Blackfoot Valley, Deeble could never estimate a population of more than 50 grouse. His collaring studies and lek counts showed an alarming drop in the western Montana sharptail population and, by the early 2000s, they were gone. 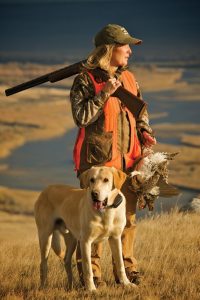 Lori Thomas and the late, great Rocky celebrate a brace of prairie sharptails after a long afternoon hike. Photo by Don & Lori Thomas

The underlying cause of their disappearance remains unclear and is likely multifactorial, although the immediate problem was likely poor nesting success and chick survival linked to lack of genetic diversity. In 1972, the Bonneville Power Association (BPA) constructed the Libby Dam and created Lake Koocanusa, which drowned a lot of sharptails and their cover. Habitat fragmentation due to human development likely played an additional role in their disappearance. Paradoxically, increasingly intense fire suppression may have contributed to the decline, as well. Sharptails avoid wooded areas where they are susceptible to predators like the rapacious goshawk. Conifer encroachment at the heads of major valleys may have inhibited dispersal necessary for the bird population to maintain adequate genetic diversity. Studies did confirm such habitat loss, which is likely a common mechanism for many of the birds’ problems. The role of climate change remains uncertain.

Sharptails appeal to a diverse group of supporters, including upland hunters, photographers, wildlife enthusiasts beguiled by their spectacular spring mating display, and landowners who just like having them around. These interests led to the formation of the Western Montana Sharptail Grouse Reintroduction Project (WMSGRP), which could serve as a model of cooperation among various stakeholders in pursuit of a common goal. While MT FWP is the lead agency, the restoration project receives funding and support from diverse sources, including a substantial mitigation fund established by the BPA following construction of the Libby Dam, the U.S. Department of Agriculture through the Natural Resources Conservation Service, Montana State University (MSU), hunter-driven wildlife advocacy groups such as the Big Sky Upland Bird Association, private landowners, and the Confederated Salish and Kootenai Tribes. Many of the field workers volunteer their time. In this era of divisiveness, other elements of society could learn a lesson from this exercise in cooperation.

To gain a better understanding of the scientific challenges the project faces, I recently spoke with Lance McNew of MSU’s Department of Animal & Range Sciences and an active participant in the WMSGRP. He acknowledged uncertainty about the causes of the birds’ decline, but condensed them into two major possibilities: habitat degradation and declining genetic diversity. The first would be harder to address, while the second could, at least theoretically, be overcome by introducing new genetics. He pointed out that all prairie grouse species are particularly susceptible to population declines linked to inbreeding. Studies done elsewhere have shown that sharptails need an intact population of around 280 birds to maintain adequate genetic diversity.

Because so much of the potential sharptail habitat in Montana is privately owned, cooperation with ranches is essential. To this end, WMSGRP began working with the MPG Ranch, a privately owned, philanthropically supported wildlife refuge in the Bitterroot Valley operating with the goal of restoring habitat and wildlife to its native state. When I spoke with Manager Beau Larkin, he expressed enthusiasm for the project and reiterated much of what I had learned about the sharptail populations’ decline. Limited releases have already taken place there and more are planned.

The mechanics of the transplant program are understandably complex. No such attempts were made when biologists first noted the population decline because of the assumption that the missing birds were Columbian sharptails. Performing a transplant required a source of birds and, at that time, Columbian sharptail numbers in states farther west were so low that no one had any to give away. While sources of prairie sharptails were readily available, biologists thought they were not native to the area, and introducing foreign genetics to an isolated ecosystem would violate basic principles of wildlife biology. Deeble’s imaginative research eventually solved that problem by demonstrating that the birds historically present in the area weren’t Columbian sharptails after all. 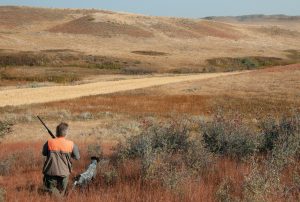 Even when it became clear that eastern Montana birds could serve as biologically acceptable transplant candidates, robbing Peter to pay Paul made no sense. Consequently, biologists developed an elaborate protocol to ensure that removing birds from trapping sites elsewhere would not adversely impact local populations at the source. Current protocol requires that trapping only takes place on leks with 15 or more males, with at least two-thirds of them always left in place. During the first rounds of introduction, only males will be moved to minimize any possible impact on grouse numbers at the capture site. Some of the selected leks include 40 to 50 males, which is exceptional, and trapping is prioritized for the largest leks identified in the area. Females will not be transplanted until more is known about the behavior and survival rate of the males after arrival in their new home.

Unfortunately, a sharptail in a live trap on the eastern Montana prairie doesn’t represent the mission accomplished moment for which everyone is hoping. The birds are delicate and must be handled carefully between capture and release. Following reintroduction, an intense period of study will attempt to answer several crucial questions: How far will the birds wander and where will they go? What will their mortality rate look like, both short- and long-term? Where will they lek? Once hens are introduced, how many of them will breed and nest successfully, and what will the chicks’ survival rates be? 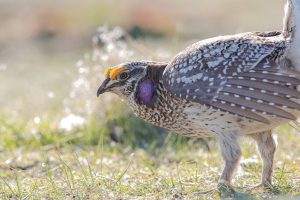 A male sharptail looks for love in just the right place at a spring lek. Photo by Don & Lori Thomas

A lot of sophisticated guessing has already taken place using computer models in advance of real data. The most pessimistic of them are inevitably … well, pessimistic. Others predict that within 10 years, there will be a 95 percent chance of a sustainable western Montana sharptail population. Only time — and a lot of hard work — will tell.

Leave it to nature to make life difficult, though. Shortly after I started this piece, avian influenza began to decimate poultry farms in the Midwest and, in early 2022, biologists detected it in Montana. The disease is caused by a highly contagious virus that does not appear to pose any threat to humans, but can spell disaster for birds, both wild and domestic. Because of concern about possible disease spread, WMSGRP acted responsibly and suspended introduction until further notice.

Admittedly a romantic and an optimist, I anticipate that mission accomplished moment will come for the restoration project, all due to an inspiring combination of hard work and cooperation. Just before this article’s publication, I received welcome news that an early group of sharptails transplanted from a lek near my hometown survived transport to the Blackfoot Valley, bred, and nested successfully, producing around 10 eggs per clutch. My optimism is feeling justified.