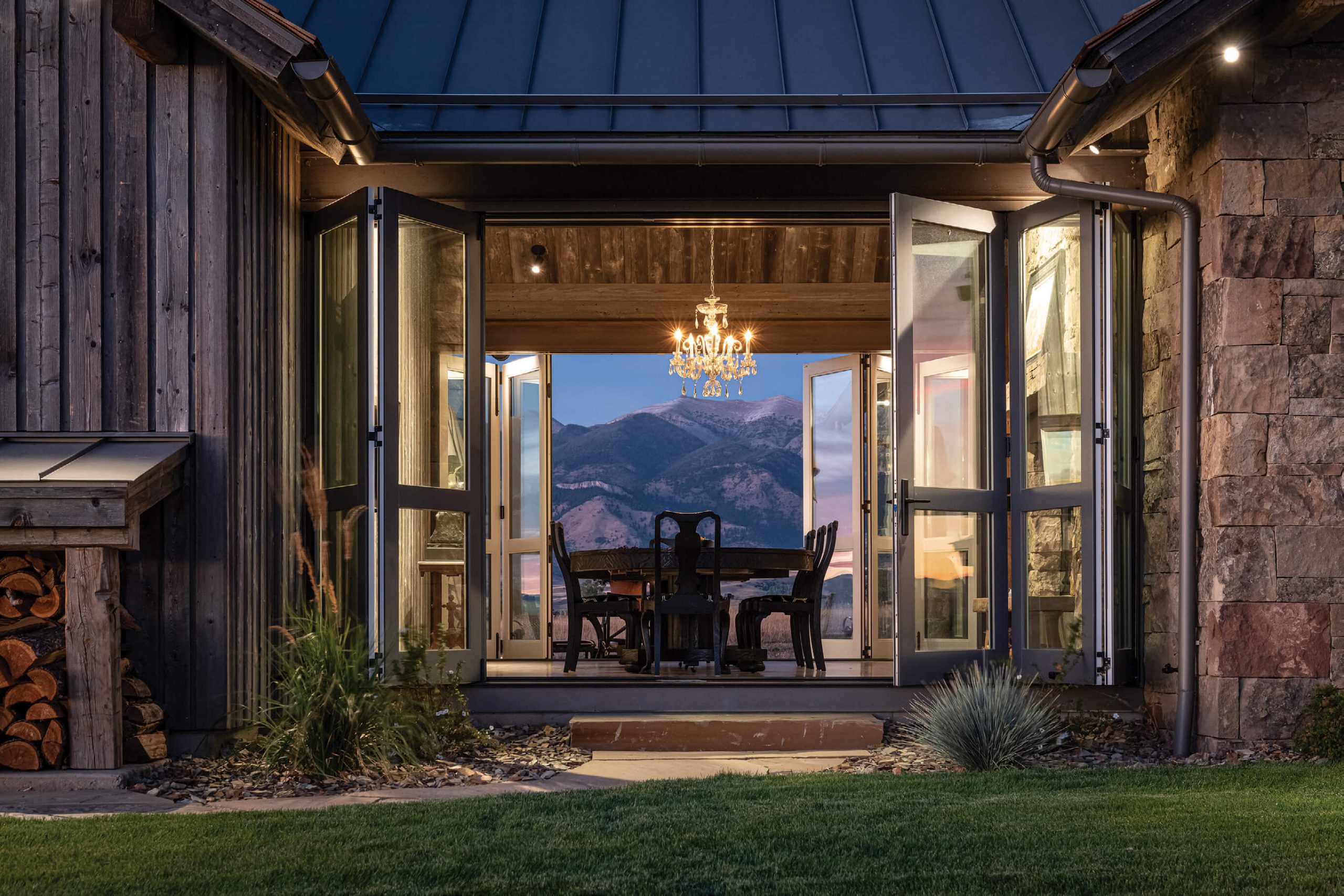 Sited to take advantage of the Bridger Mountain views in Bozeman, Montana, the dining room fully opens up to the outdoors on the north and south sides of the home.

When Max Baucus’ term as Ambassador to the People’s Republic of China ended in 2017, he and his wife, Melodee Hanes, had a decision to make — though, it really wasn’t much of a conversation. “We wanted to live in Montana. We knew we wanted to live in Bozeman,” Baucus says. 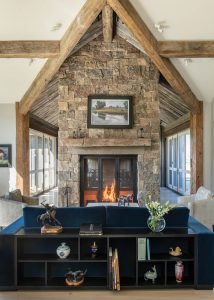 The wood-burning fireplace separates the living room from the dining room and sees “a lot of use,” says former U.S. Senator and Ambassador Max Baucus. Pieces from the couples’ art collection include Western works, with a focus on Montana artists, along with selections from their time spent in China.

Born in Helena, Baucus served in the Senate for the longest stretch in Montana’s history: 36 years beginning in 1978. When President Barack Obama appointed him as ambassador in 2014, Baucus left his position as chair of the Senate Finance Committee, was sworn in, and the couple moved across the globe. And during her more than 30-year career in public service and law, Hanes worked as a deputy county attorney in Montana and was appointed to the U.S. Department of Justice by President Obama as the acting director of the Office of Juvenile Justice and Delinquency Prevention in June 2009. 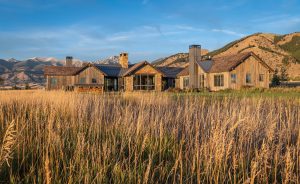 Designed by JLF Architects and built by OSM Construction, the reclaimed barn wood siding and regionally-sourced stone blend seamlessly throughout the exterior, a testament to the craftsmanship of the builders and a showcase for Montana Regionalism.

“One main reason why I — and I’m sure this is the case with Mel — love this area so much, love the Gallatin Valley so much, is because of the visual space — the weather and the mountains and so forth,” Baucus says. “I honestly think that the Gallatin Valley is one of the most beautiful valleys in the world, and it’s because of the Bridgers and how you can see, almost every day, the weather changing: There’s a squall going through, it’s summer or winter, the colors are a kaleidoscope — different colors are always constantly changing. This lot, this site, is really what sold us on building here.” 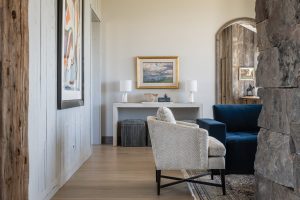 Furniture and other decor items were selected to complement the homeowners’ existing art collection and add a contemporary edge. Designer Melina Datsopoulos, owner of the Missoula, Montana-based Trappings Studio, assisted in selecting the finishing interior details. 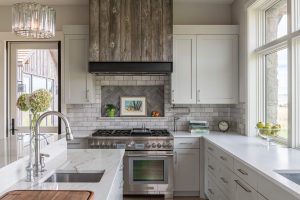 A comfortable and functional kitchen with views of the surrounding landscape was important to homeowner Melodee Hanes. “We love good food, good wine, I love to cook, and we love to have our family around when we do that,” she says. “I call it ‘Houston control.’”

The lot is nestled in the foothills of the Bridger Mountains outside of Bozeman, within view of four other mountain ranges. A conservation easement to the north ensures that the adjacent land will remain undeveloped. And despite the looming mountains, the landscape evokes a different inherent characteristic for design principal Paul Bertelli. “When walking the site, it was quite rural. And for our environment, it was less mountain-oriented and more prairie-oriented,” the president and senior designer at JLF Architects explains. “The views were virtually 360 degrees.” 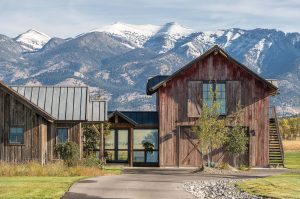 The red barn, crafted from reclaimed wood, references the architectural history of the valley and conceals an apartment and garage. The boards were strategically placed to look as if they had aged over the decades. The barn is connected to the home by a glass breezeway, referencing the transition from old to new.

When it was time to return to Montana and build their dream home on the picturesque lot, Hanes and Baucus interviewed a few architects but connected instantly with Bertelli. They appreciated the individuality, subtlety, and beauty of his designs, Hanes explains. “Paul is an artist,” Baucus adds. “He’s very aesthetically inclined; he has a significant artistic sense. But secondarily, it was very important to me to tie us to the valley. Paul’s designs had a lot more glass, and his lines — I loved his lines.” 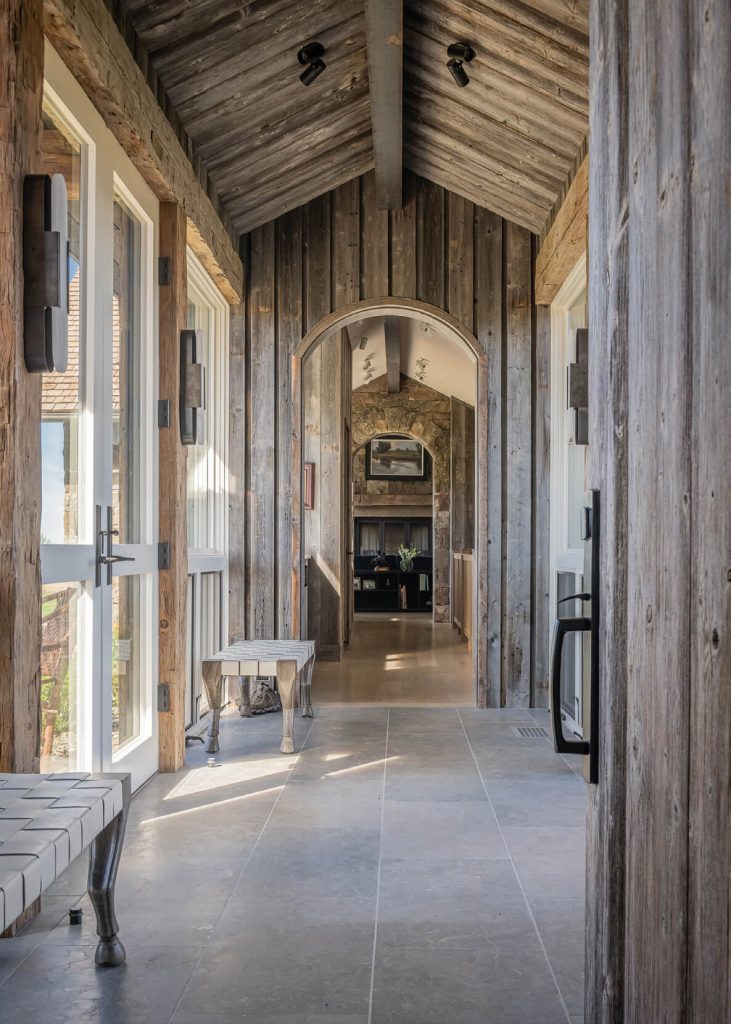 Reclaimed wood appears throughout the interior, creating a sense of continuity from the home’s exterior. Baucus especially loves the long lines of sight created by JLF Architects.

Built by OSM Construction, the resulting 3,800-square-foot house was designed in response to the prairie influence to reflect agricultural typography. The home recognizes the valley’s architectural history and engages with its surroundings due to its low profile, long sightlines, and unobstructed views. The goal was to “create this intimate space that really celebrated the site and the mountains,” says Ashley Sullivan, JLF partner and project architect. 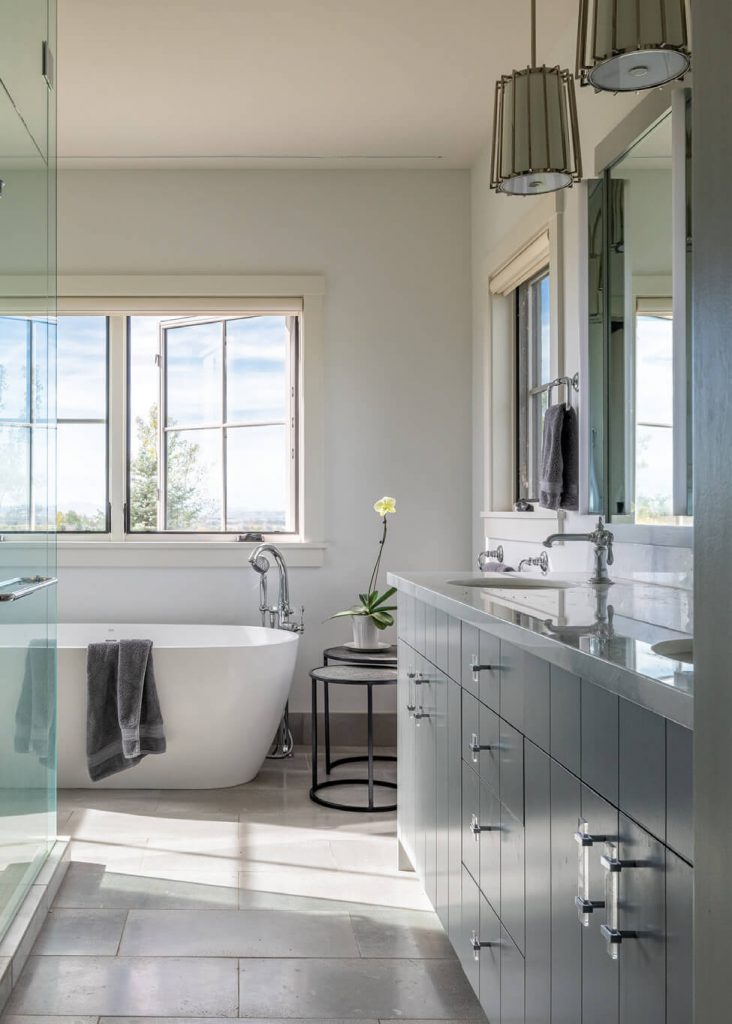 Reclaimed wood appears throughout the interior, creating a sense of continuity from the home’s exterior. Baucus especially loves the long lines of sight created by JLF Architects.

The architecture also represents the Regionalism that defines JLF’s design philosophy. It’s built with reclaimed materials that reflect those historically used in the valley. Components of the house, such as the main public areas and the homeowners’ suite, were designed as separate volumes and connected by breezeways to reduce the scale and reference the practice of agricultural buildings developing over time, as their owners’ needs changed. “Regionalism is familiar, comfortable; it makes you feel like [a home is] where it should be,” says Peter Belschwender, CEO of OSM Construction. “When you see something out of place, it makes you know what Regionalism is and why it’s important.” 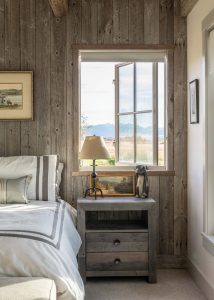 The home was sited to take advantage of the 360-degree mountain views that are visible from nearly every room, including this bedroom suite.

For Bertelli, one of the primary considerations of Regionalism is to reflect a human scale. “Contemporary or even Mid-century thinking made rooms bigger and more generous, and the scale isn’t defined by its use,” Bertelli explains. “I think, for the most part, that’s what embodied the pioneering spirit and the homesteading spirit [of building] in Montana, or the Rocky Mountain West. Things had to be modest for a couple of reasons: One, if you were building a log house, you didn’t have a crane or a truck to help you. You had a horse and an ax. You had to cut a tree and drag it out of the forest with a horse, and you had to personally lift that into place, which means the scale of the material you are working with and the scale of the house had to be modest enough to be crafted by one or two people with a horse.” 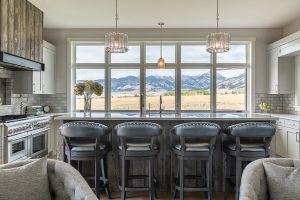 Hanes worked closely with JLF architect Ashley Sullivan to design and incorporate details that support how the couple lives. In the kitchen, for example, the island includes storage for tablecloths, an item that Hanes reaches for often.

Despite the grandeur of the surrounding mountains, beautifully ascending all around, the scale that people could build was limited by what they could carry. These early cabins and ranches were modest and easy to heat; they were low to the ground. And in keeping with this tradition, buildings need to “walk softly on the land,” as JLF’s founder Jonathan Foote once said.

As one approaches the Baucus-Hanes home, you first encounter a weathered red barn. In addition to concealing an apartment and garage, it provides a historical view of what the property might have been used for 120 years ago. “That beautiful red barn fits so well next to that house; it looks like it was always meant to be there,” says Terry McDonald, JLF associate and project manager.

The barn is connected to the main house by a glass breezeway that leads to a mudroom, and then into the kitchen, family room, and great room. A wood-burning fireplace separates the great room from the dining room, creating a setting for quiet dinner conversations. The dining room walls fully open up to the outdoors on the north and south. From this centralized space, the home flows west into the homeowners’ bedroom suite; and to the east, there’s an office, mudroom, and laundry room. From the mudroom, a stairwell leads to two additional guest suites and a comfortable home theater room on the lower level. 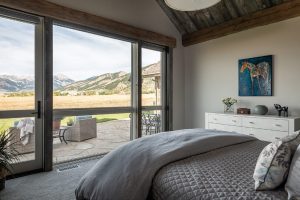 In the homeowners’ bedroom, a painting by Montana artist Carol Spielman — a gift to Hanes from Baucus — takes pride of place.

Melina Datsopoulos, an interior designer with the Missoula, Montana-based firm Trappings Studio, was “integral” to the home’s outcome, Hanes says. She helped them select the interior fixtures and finishes, and reframed beloved works of art. The couple collects works by Montana artists, such as Rudy Autio, Harry Koyama, and Carol Spielman, continuing a tradition established by Baucus’ mother. They also incorporated pieces they brought home from China, such as the Terracotta Warrior that stands guard outside.

Now that Baucus and Hanes have lived in the home for about a year, they can sum up the experience in one simple word: “perfect.”

“I say to Mel a couple, three times a month, spontaneously, ‘Boy, I like this house. It’s the lines. It’s classy. It’s aesthetic. It’s not over the top,’” Baucus says.

“We’re just glad to be in Montana,” Hanes adds, “in a place that we love.”

“We’re very lucky,” Baucus says. “I’m lucky — the jobs I’ve had representing Montana in the U.S. Senate, representing the U.S. over in China, finding Mel, living in Montana, finding a great designer. I feel incredibly lucky. This is our house. The only one we built together, and we’ll be here forever and ever.”