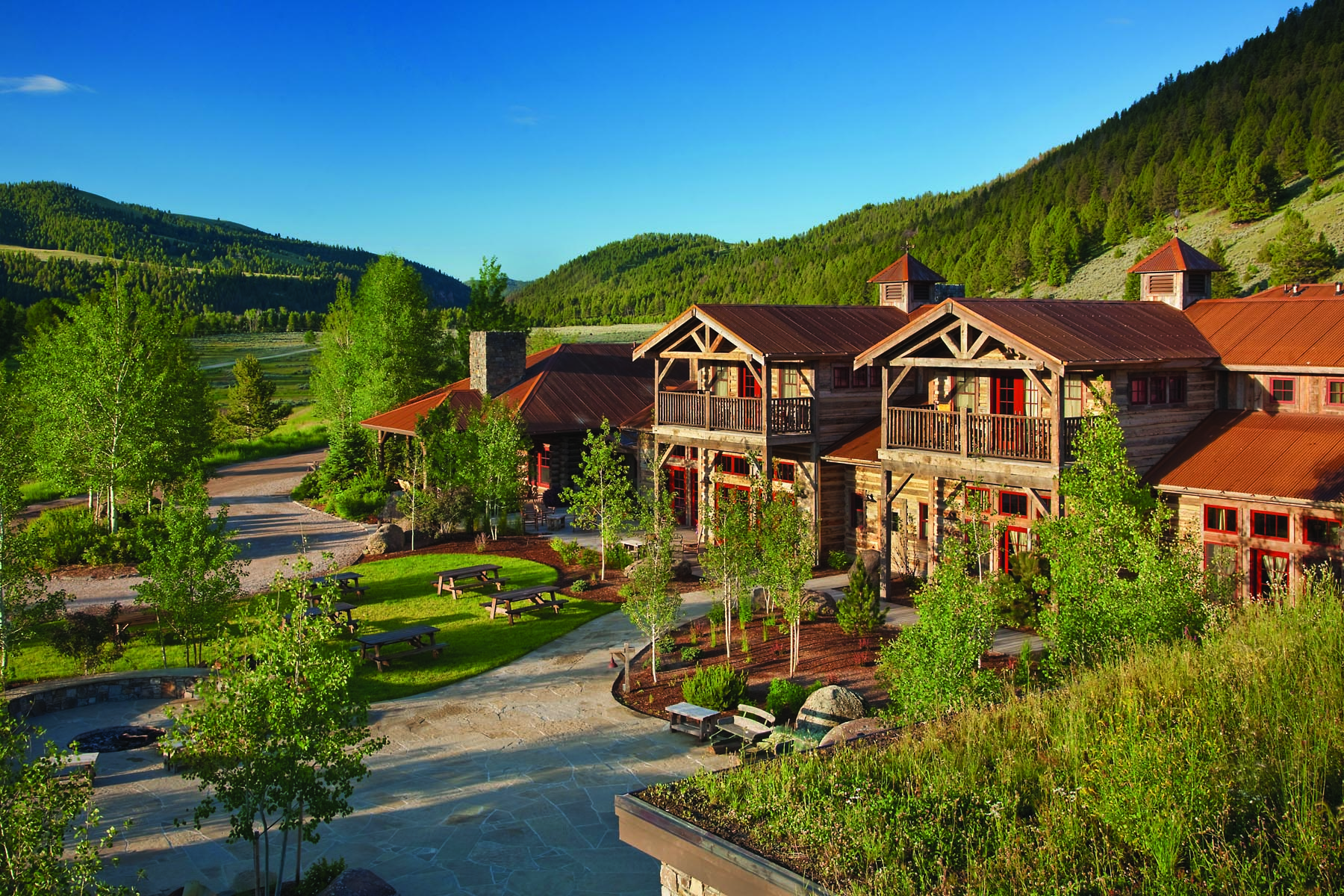 WHEN IT COMES TO BUILDING A HOME, Patrick and Mary Whalen are passionate about doing things the old fashioned way. Instead of cutting corners with the latest tools and techniques, they prefer the centuries’ old custom craftsmanship and wood that’s notched together or scribed by hand.

So when it came time to build their home in Big Sky’s Yellowstone Club, they put together a team to help them create a structure that was based on traditional approaches. This included Bozeman-based architect Larry Pearson at the helm. Known for his keen ability to blend a home into the natural surroundings and the natural surrounding into the home, he also has a passion and understanding of functional handcrafted techniques. Lohss Construction, known for their detailed custom finishes, was chosen to put Pearson Design Group’s vision into action.

And then they all took a little trip. To ensure that the team fully understood the authenticity and quality they were seeking, the Whalen’s brought the team back to their primary residence in Westchester, New York. It was a colonial home that they had painstakingly remodeled over many years. “We were completely dedicated to American crafted architecture,” Whalen explains. “We had the remodel done room by room, putting antique glass in every window using old tools and types of paint.”

They wanted the same quality craftsmanship in their new Montana home, but with a completely different look and feel. “From that perspective, the key was to think about what it meant to have an American house in Montana,” Whalen says. “We wanted to make it feel more like a lodge, like something you’d find in Yellowstone National Park in the 1890s; something that took on the West when it was getting settled, but was more than just gruff.”

For Pearson, the trip to New York gave him greater clarity into the Whalen’s desires. “That home was an expression of creativity and of family, and they had spent years on it,” Pearson says. “Essentially, I had to recreate that same level of attention to detail and focus in a much shorter period of time; what a great challenge!”

Pearson thought about the home in layers, figuring out how to create multiple spaces incorporating nature and craftsmanship at every turn. “It was about how to create something that shows a richness of detail, and yet you can move from space to space without feeling jolted by multiple influences,” Pearson says. “One of my old jokes is that you don’t want to have multiple houses under one roof.”

The design turned into a four story, eight-bedroom home with a side tower overlooking the ski slopes. During the building process, the Lohss crew added to the handcrafted details. “We had many conversations with Larry, but we were also able to use our own creative license in the detailing, and that was exciting,” says Chris Lohss, owner of Lohss Construction.

The railings are made from standing dead Montana lodgepole pines, each individually shaped and with a unique texture, compliments of the Pine Beetles that most likely led to its impending doom. “These really add character to the home,” Lohss explains. “They’re aesthetically pleasing and environmentally friendly, since we’re not harvesting live trees.”

The floors throughout the home are reclaimed antique white oak, which Lohss’ crew made by hand, milling old hewn timber into one-inch flooring. “It’s great, high quality wood that stains nicely and evenly, but it’s not easy to come by,” Lohss says.

Taking on the appearance of a log home, the immense logs along the walls were filled in with small lodgepole branches instead of chinking. Large chunks of the aptly named Montana moss rock make up the fireplace in the great room, with different colored mosses still clinging to each piece.

And then there are the doors, approximately 18 handmade, custom, highly detailed and individualized doors. “We approached the doors as part of that expression of unique craftsmanship,” Pearson explains. “Patrick wanted to make it creative and experiential, using different hardware and ironwork throughout.”

The lodge-like feeling is accomplished not only in the design and details that Pearson and Lohss Construction incorporated, but also in the fixtures and furniture, much like an inn dating back to the early days of Yellowstone. “Back then, on the edge of the ecosystem of the park, they would have built it from local materials right there,” Pearson says. “We used a lot of Montana products, the same kinds of materials that could have come off of Lone Mountain or the adjacent hills.”

And some actually did, as Lohss’ crew found some unique standing dead wood from the ski run right outside the door for character logs in the staircase. “For the ironwork, it looked like it could have been made by the same blacksmith who worked down in the valley shoeing horses back in the day,” Pearson adds.

The end result was just what the Whalens had in mind when they originally gave the team a tour of their New York home. “Because I’m really into the concept of historical architecture, I notice so many things that are fantastic in this home; the craft and quality of material,” Whalen says. “To me, it was more of an homage to the craft than to nature.” 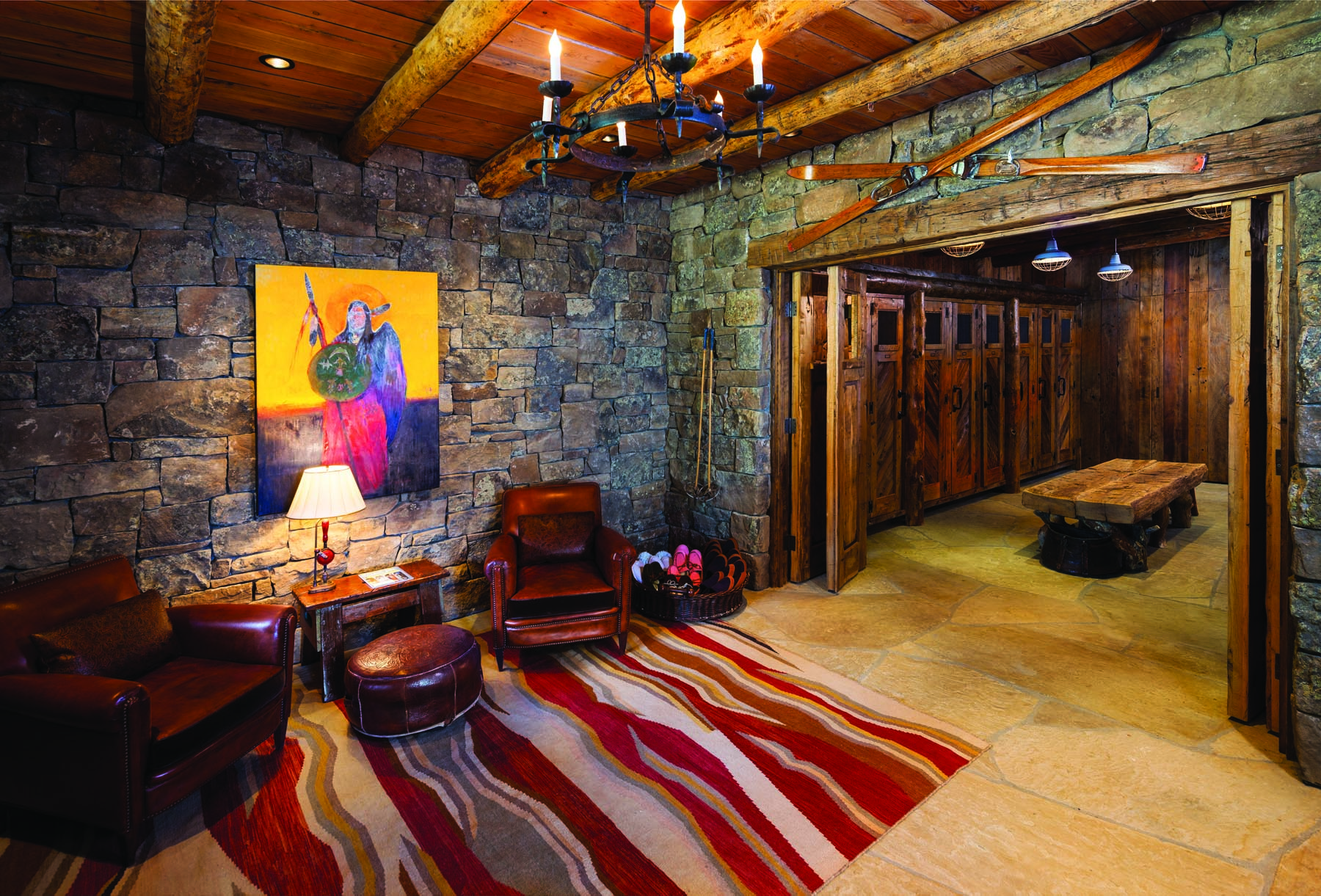 One of the most important rooms in a ski home, the locker room was designed with custom gear lockers, complete with boot warmers. 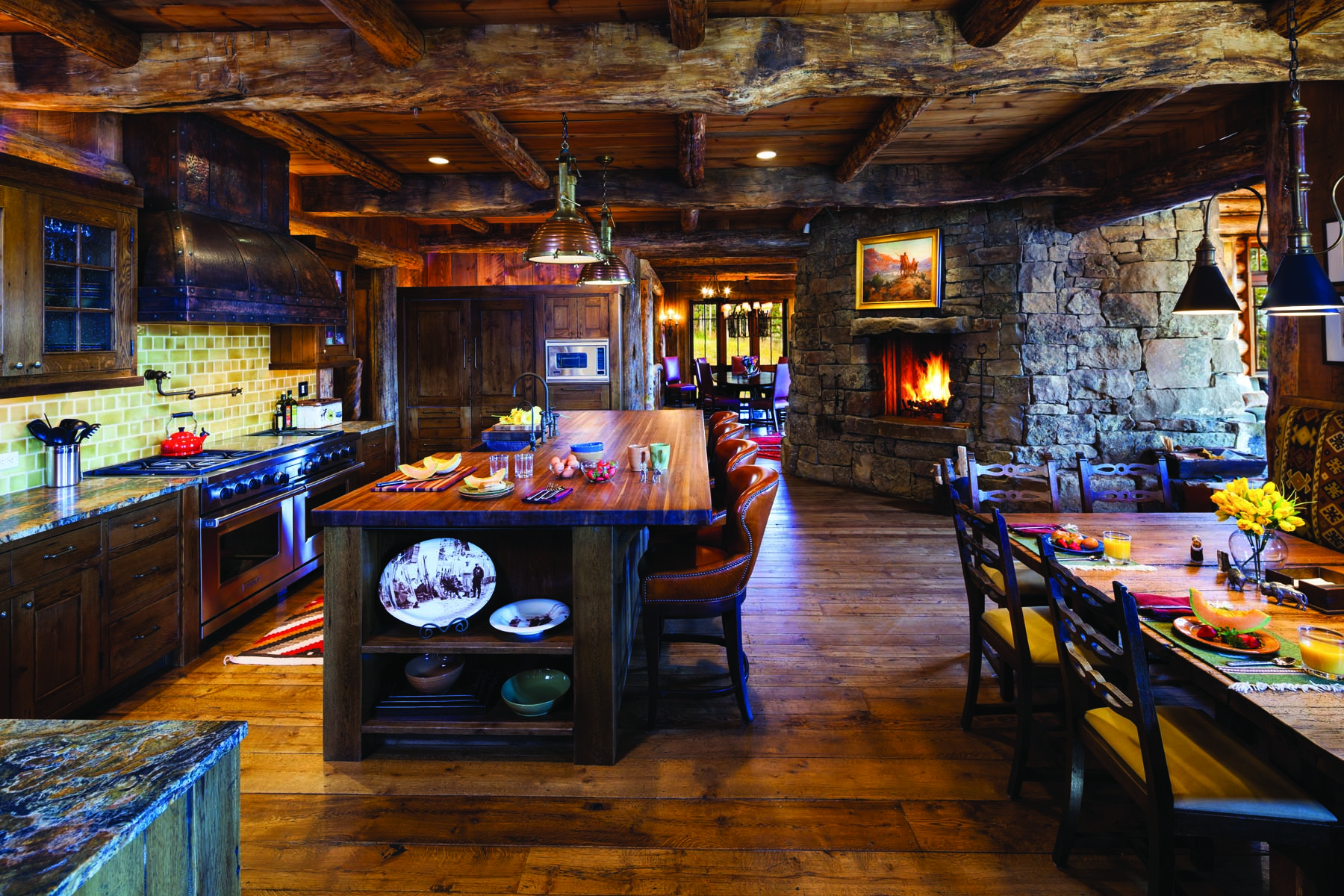 The open kitchen and casual dining areas open up to the great room, sharing the views and the fireplace. 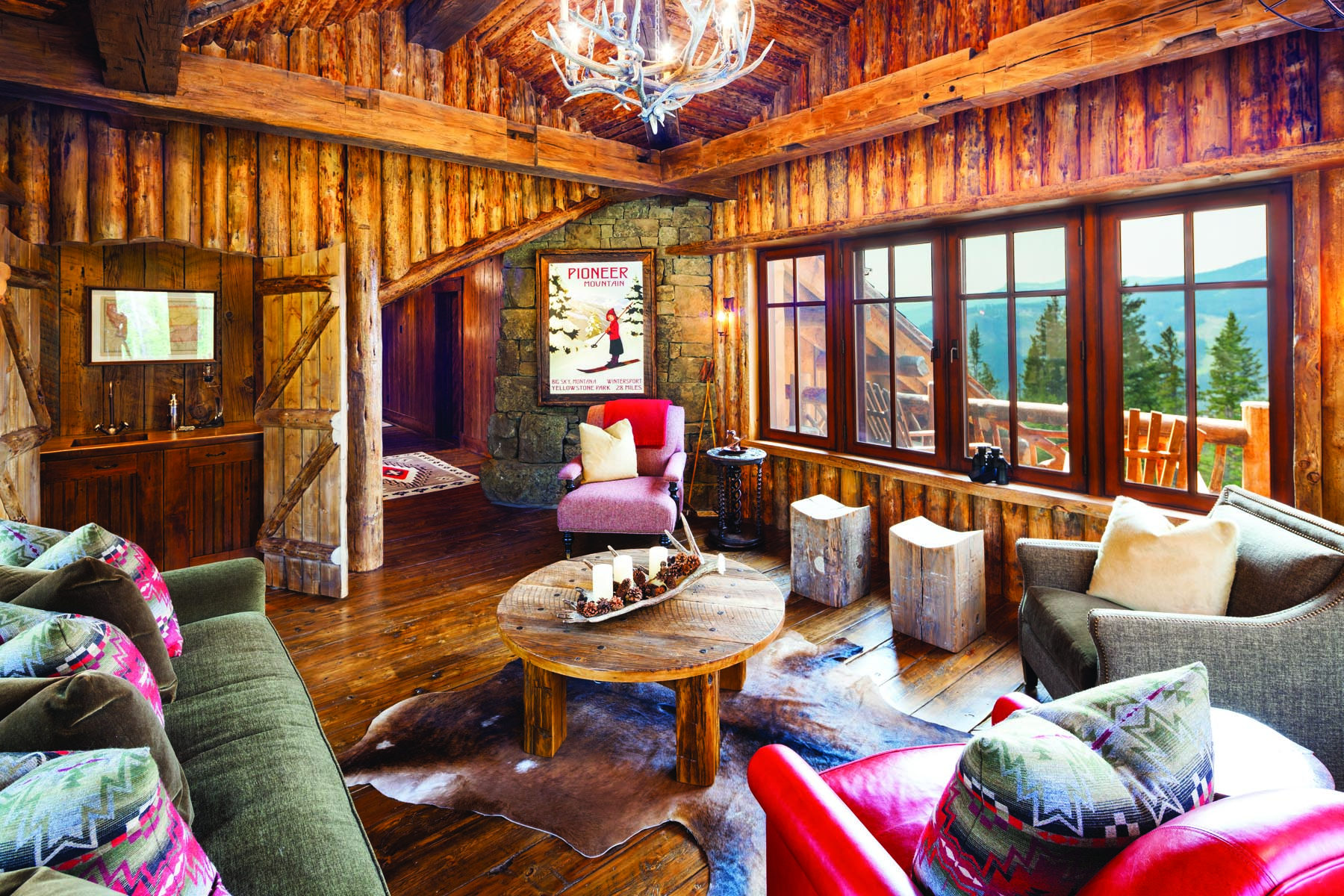 More casual gathering spaces, with pops of color, allow guests to escape and enjoy the views. 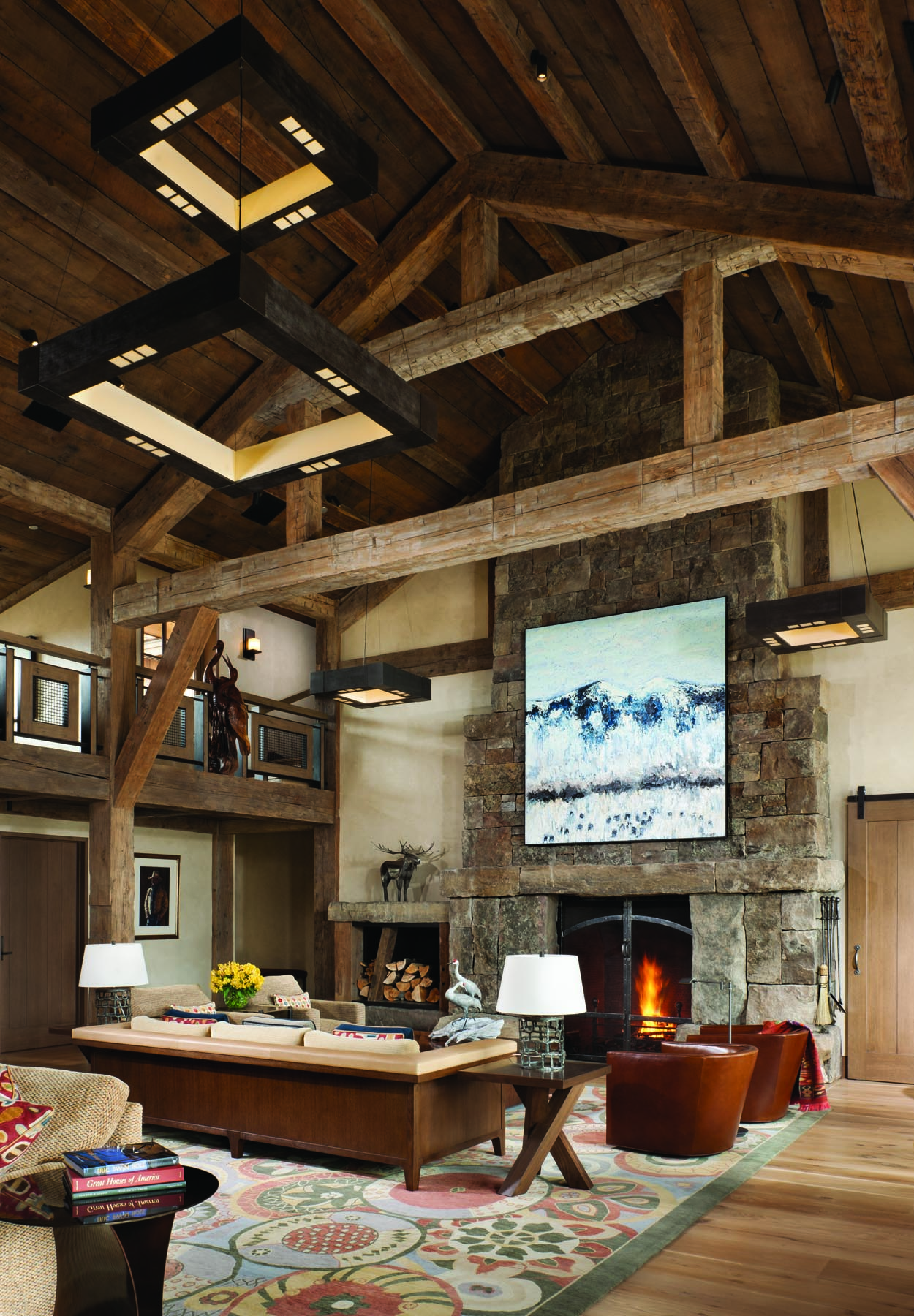 In classic Western lodge style, the stately stone fireplace is a central gathering place, replete with plush couches and raging fire in the hearth. 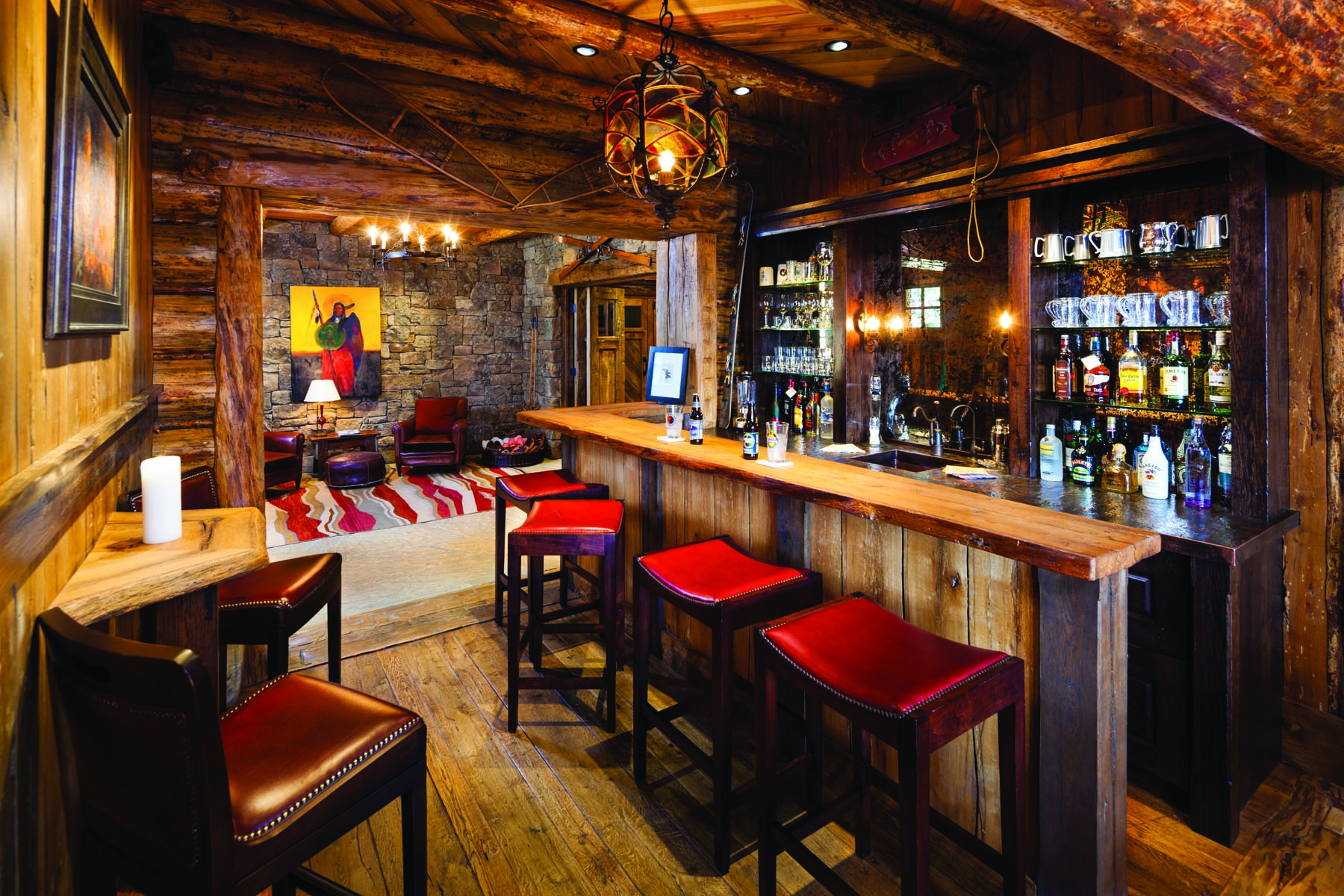 The Whalen’s desire for a lodge-like feeling is accomplished through multiple gathering spaces, including a bar for après ski drinks right by the slopeside door. 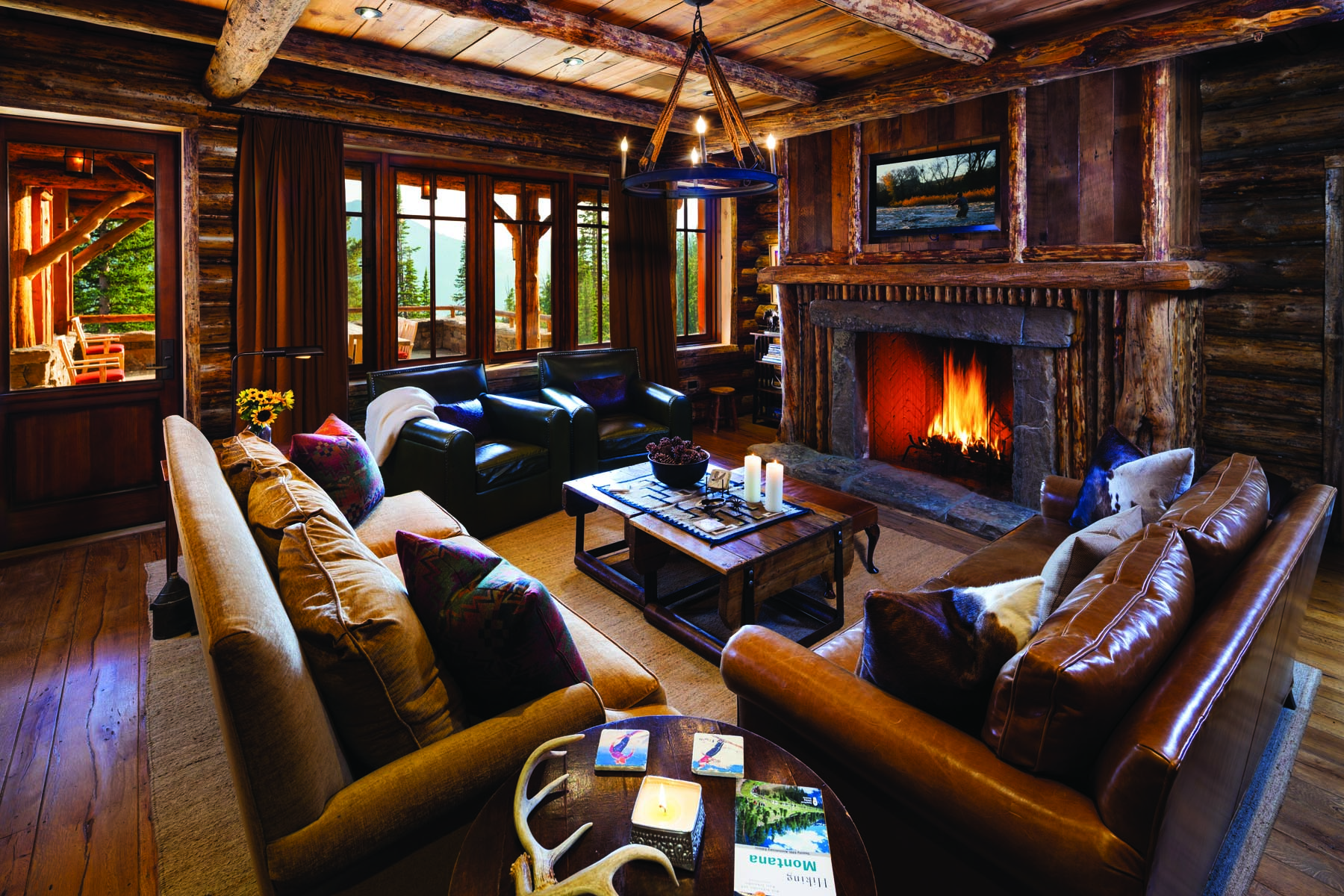 Another comfortable living room doubles as a TV room, away from the action. 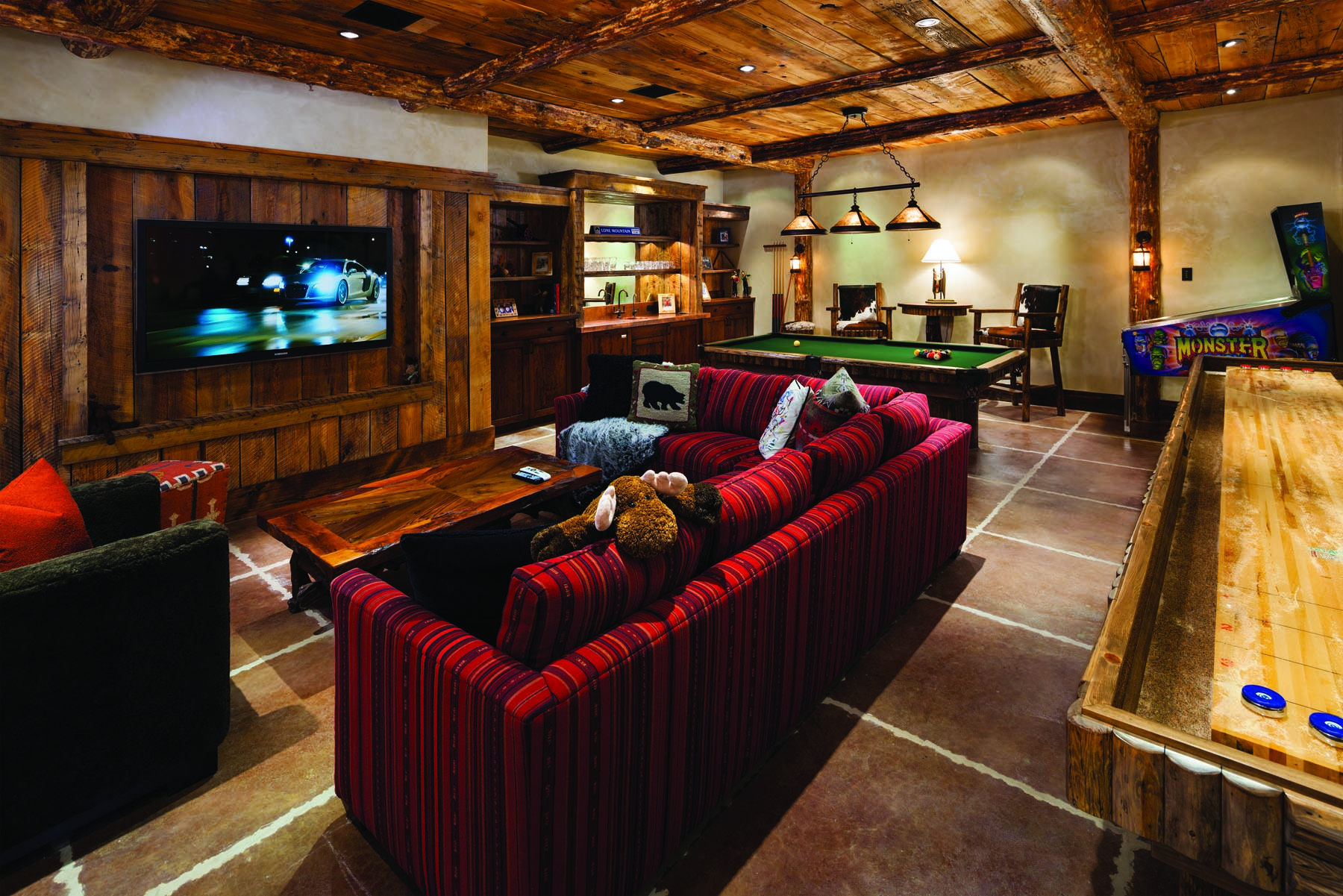 Kids (and adults) can escape to the game room on the lower floors for evening entertainment. 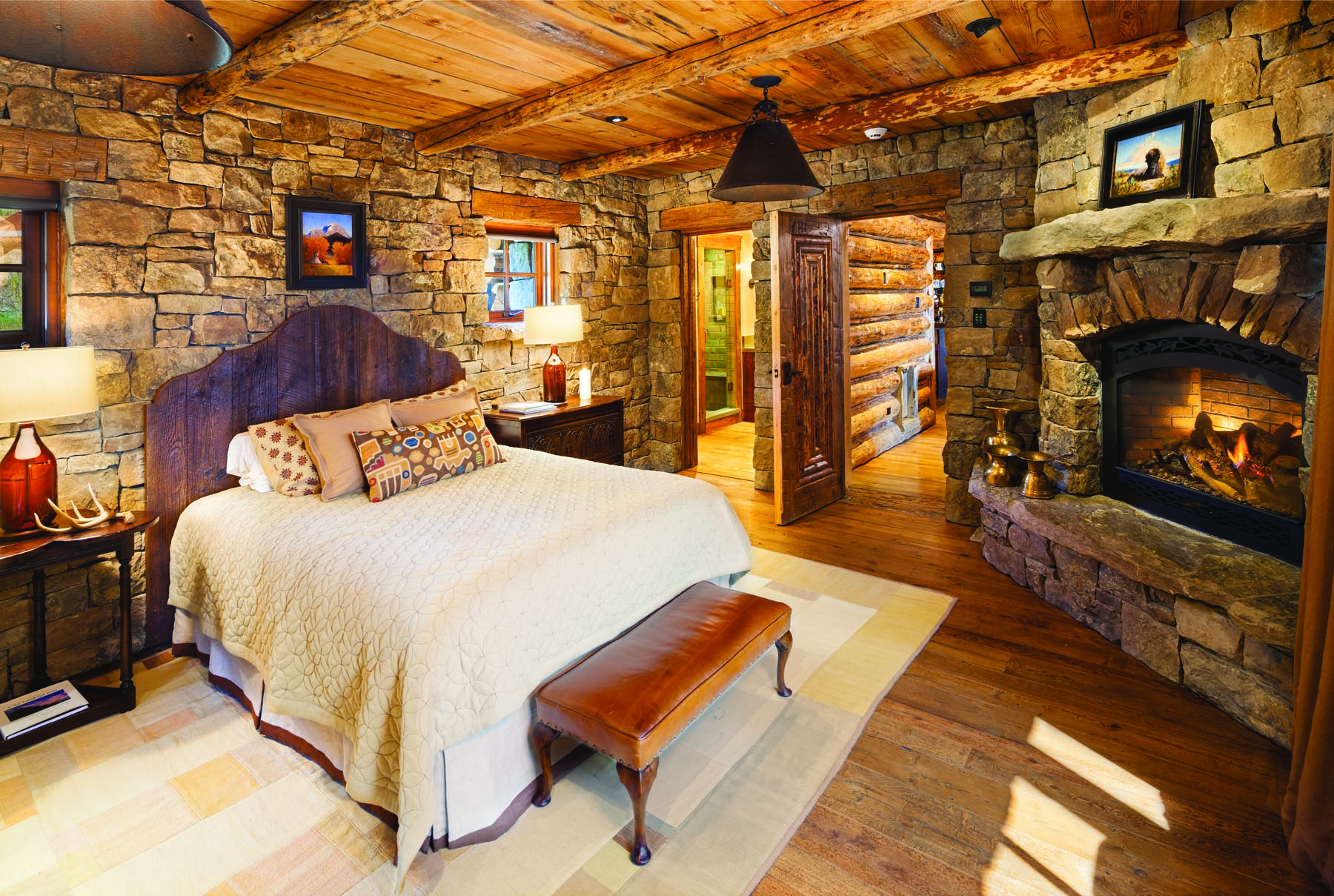 Most of the guest bedrooms and bathrooms have individual design touches. 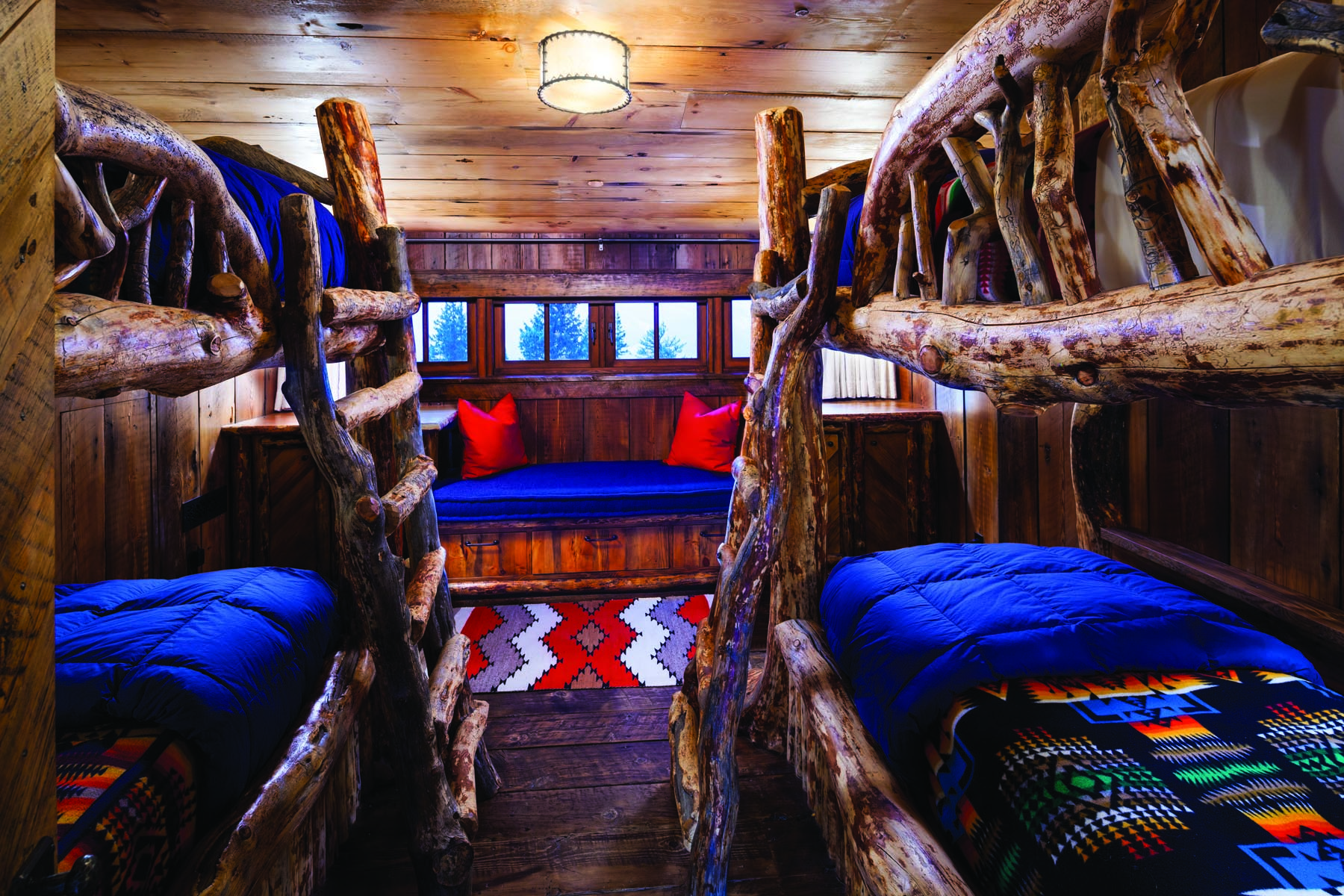 Kids can pile into the bunkroom, with custom bunk beds, for a fun sleepover. 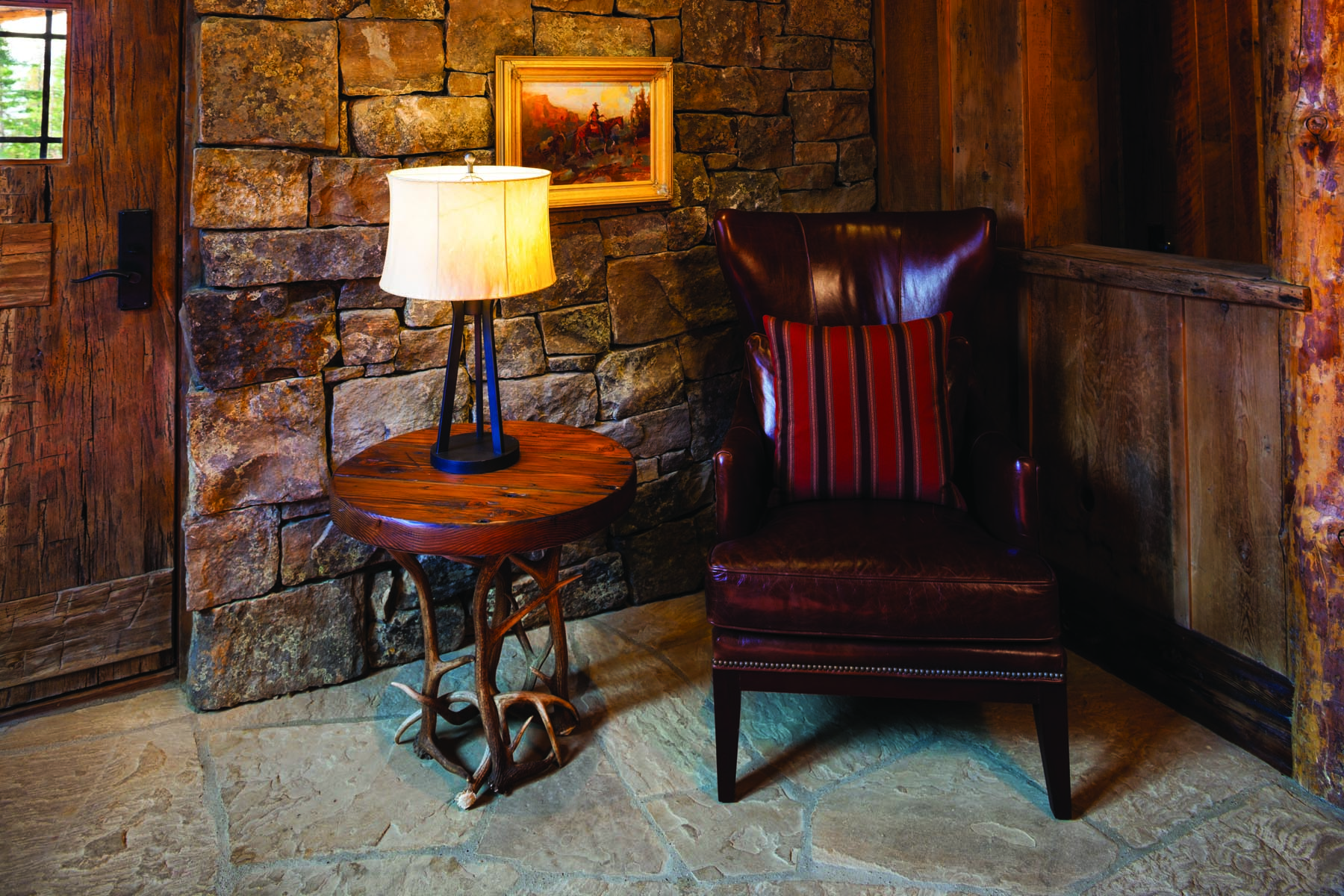 Tucked away seating areas are sprinkled throughout the home. 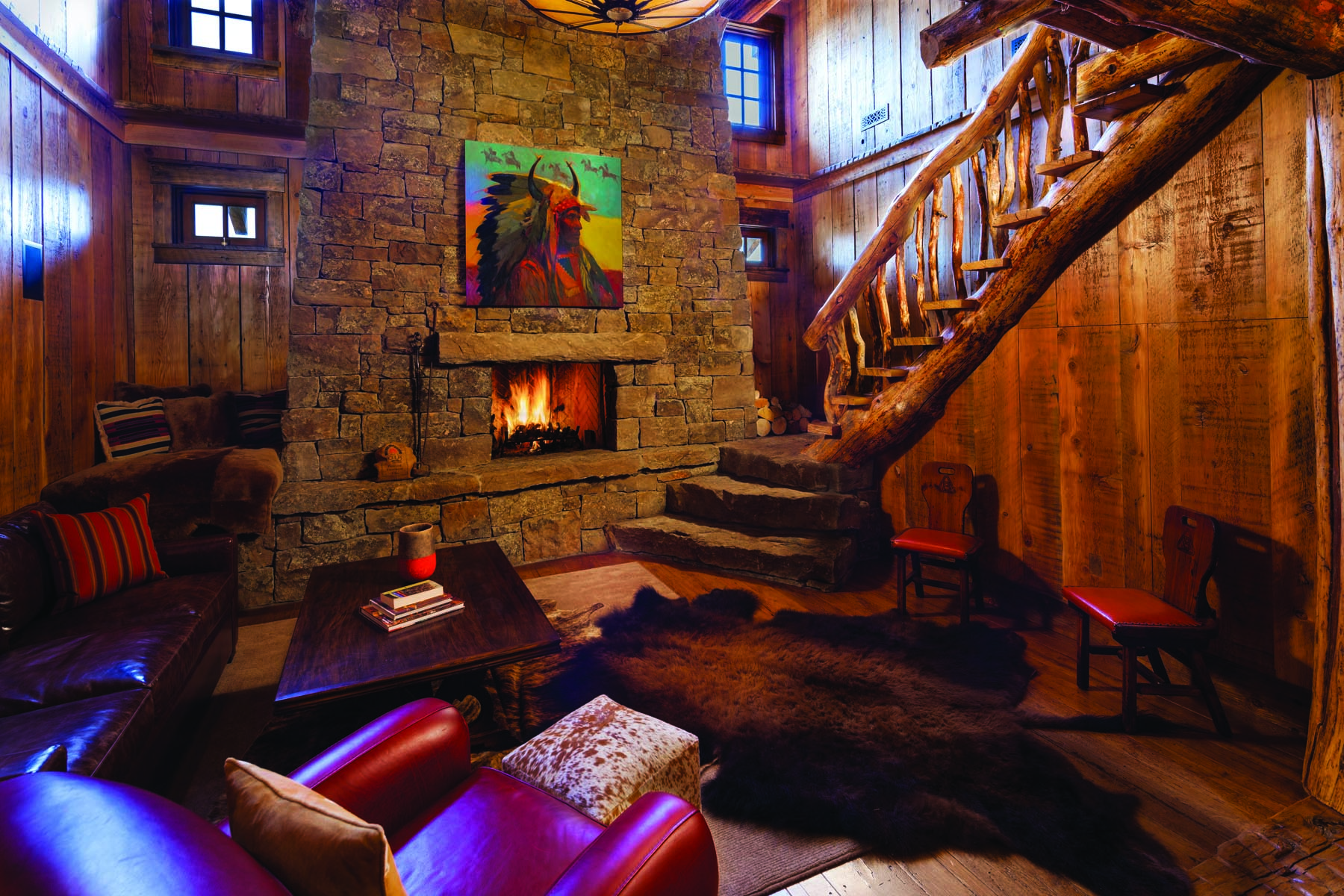 Lohss Construction added custom touches, like this character log for the staircase, found on the slopes right outside of the home.