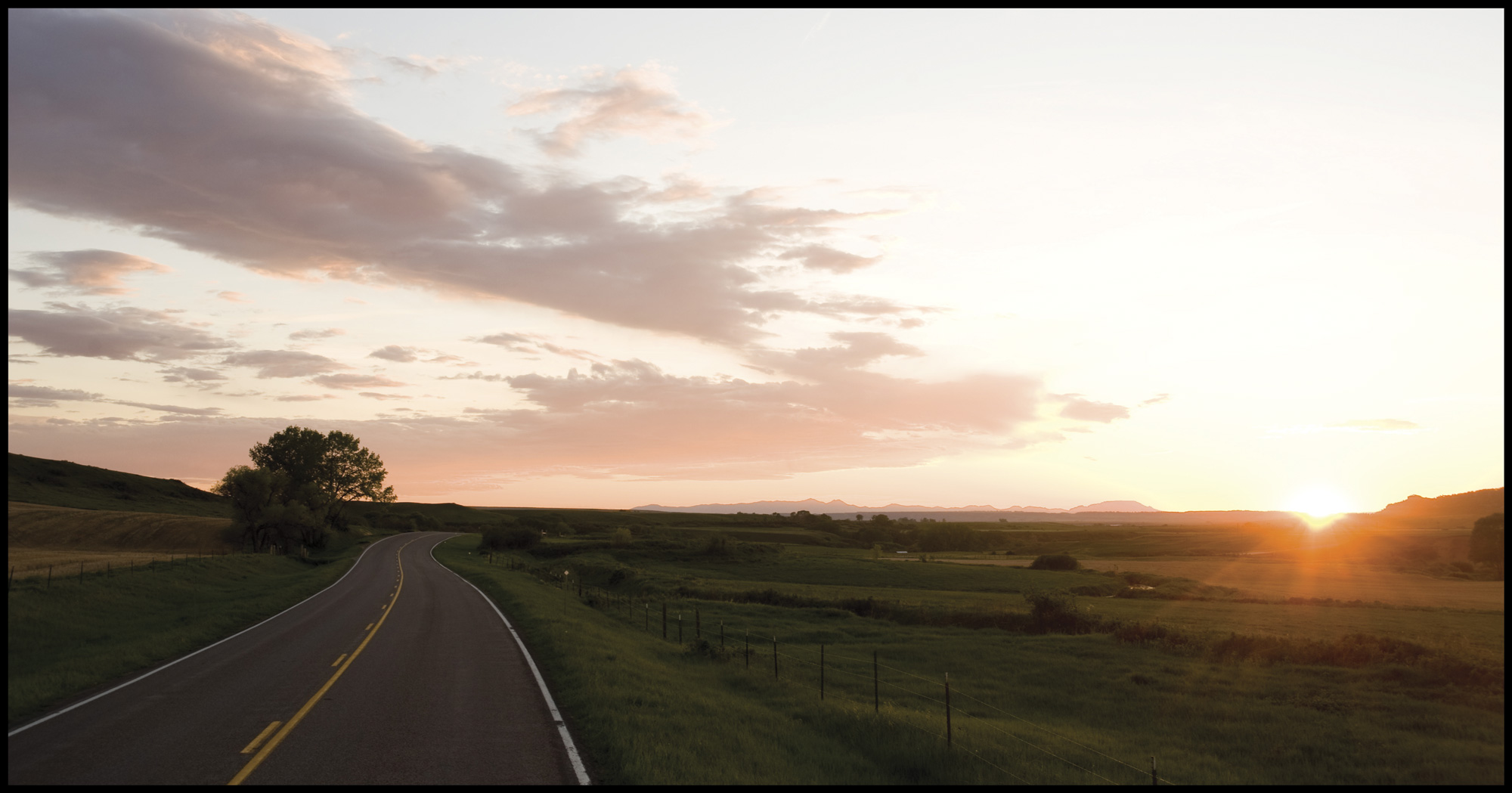 20 Aug Hitching a Ride Through the Big Sky

THERE’S NOT A LOT to do when you’re hitchhiking and the highway’s gone quiet. You can stretch. You can write in your notebook. You can listen to the meadowlarks, or check out the trash in the ditch. You can take that song in your head and sing it — loud as you please.

I’d tried all these things already on this simmering August morning while waiting along the on-ramp to Interstate 90 at Three Forks. It was Day Four of my trek from Minneapolis to Washington, a trip on which I’d hoped to discover whether it is still possible to hitchhike in America, several decades since I’d last done it.

The days were long. I’d covered 1,000 miles, as much through persistence as anything. But at this moment, I was stuck.

I started taking pictures of the roadside weeds, bright with midsummer blooms. The light post at the bottom of the highway ramp also caught my eye, curving in graceful isolation against the deep, blue Western sky. I walked closer, looking for a better perspective, and that’s when I noticed the rusted writing etched into the post at eye-level.

I might have gasped. To think that 30 years ago Krystal had stood in this very spot, idling as I was until a ride materialized. Clearly she’d gotten somewhere. Or maybe she just gave up and settled in Three Forks. The small discovery got me thinking about the maybes that might have happened in her life from here. Maybe she’d become the waitress who sneaked me two scones at breakfast, free of charge. Maybe she went on to a career in archaeology in the Andes, or jewelry making in Sedona. Perhaps she’s a grandmother now: Grandma K.

It didn’t matter. For a moment, she was right there, as my traveling companion. It was 1981, it was summer. We were young, full of adventure and heading west. I snapped a picture of her good wishes and before I could even jam the camera back into my pack, a driver pulled up to the shoulder of the road. Thank you, Krystal.

Random luck, that’s what I remembered about hitchhiking. And the kindness of strangers, impromptu camaraderie in between long stretches of loneliness and self-doubt. A generation ago, if you had no money, but a lot of wanderlust, it was the way to go. There was always someone to pick you up — hippies in vans; businessman in wide, air-conditioned sedans looking for conversation; guys just out of Vietnam who were curious about what had changed back home; older couples with kids about our age. All types, and they’d often tell their secrets, encouraged by the odd intimacy of the front seat, where the hours demand conversation, but eye contact is difficult. And then they dropped you off and drove out of your life, leaving you a little closer to your destination, with their stories now in your bag.

But in the 30 or 40 years since then, hitchhikers seemed to vanish, as completely and suddenly as dinosaurs. A dramatic increase in car ownership was one obvious reason. Cheaper airfares, another. There was also the aging of Baby Boomer’s (like me), who in turn, started settling down. No doubt fear, stoked by media magnification of crime, also played a role; many states have laws limiting hitchhikers. And partly due to the profusion of personal media, it had become easier to choose social isolation over the unpredictable personal encounter. That had become true in my own life and I didn’t like it so much.

So the year I turned 60, the idea of one more good hitchhike took hold. I was in a rare position — relatively unattached. A job, a house, sure, but no one who could tell me no. My health was good. Summer was coming. It was time for a road trip.

I knew the route well, having taken many trips to visit my daughter in Missoula when she’d attended the university back in the 1990s. But this trip would be farther. An old newspaper pal of mine had just bought the weekly paper in the small town of Twisp, Washington, in the Cascades east of Seattle. Why not go see him?

So on a Saturday morning in August I hopped a commuter train in downtown Minneapolis, rode it as far west as it goes, then headed for the highway and started thumbing.

It took a long time to find a rhythm. I waited longer for rides than I ever remembered. In Albany, Minnesota, 100 miles from home, I almost turned back. If I gave up here, I figured, it would seem as if I’d never left. I embraced patience and faith that the rides would come.

And they did. A rodeo bull breeder got me halfway across North Dakota. There was a National Guard chaplain, fracking field workers and two tribal police officers (off duty, in succession), to name a few. There was a God-fearing ex-con with spikes in his face who put me on the back of his motorcycle (a lifetime first for me). There was a circuit-riding pharmacist and a sweet young married couple on their way to visit her parents in Colville, Washington. When I asked why they’d picked me up — I asked everyone that — some said it was because I looked clean cut, or at least “not like a drug dealer.” (A friend’s tip to wear a white shirt seemed to be paying off.) Two said God had told them to stop for me. And when I asked each about fear, they turned the issue inside out. From the waitress in Three Forks, to the tribal cops, to the several folks who picked me up because they’d seen me hours before, in the same spot, as they were heading the other way, it was clear: They were actually looking out for me.

This tag team of strangers carried me across the rich tapestry that spreads west of the Mississippi — from the lush, rolling farmland of Minnesota, across the Dakota prairies and the badlands and mountains of Montana to the crisp wheat fields and brushy foothills of eastern Washington. One driver, Terry, who took me more than 350 miles from Glendive to Bozeman, told me in Miles City that he had to go visit his sister. He dropped me off at a coffee shop and later returned for me just as he had said he would — and with his car washed. These were people I should fear?

My only scare happened on a ride from Butte to Missoula, when the driver slammed back the beer he’d been hiding between his legs. As we drove he grew more and more animated, gesturing with his hands while winding down the road at 90 miles per hour. When he dropped me off, I found a shade tree to stretch out under, weak with adrenaline, I fell into a heavy nap, relieved to still be in one piece.

Back on the shoulder at Missoula, with the temperature in the mid-90s, a grassfire blazing on the side of Mount Jumbo, I waited several hours for a ride — unthinkable in a college town a generation ago. Did none of these drivers, hundreds of them with Idaho plates, understand what my hand-lettered sign reading “Idaho” meant? I had to remind myself that I was not a fresh-faced, cash-strapped student heading home for the weekend. I was an older guy, old enough to have my own wheels. As a hitchhiker I was an oddball; a risk. I wondered if it had ever been easy for 60-year-olds to snag rides across the U.S., or if I’d let nostalgia obscure some of the realities of the road.

But by late afternoon the next day I’d made it to Bridgeport, Washington, where nostalgia and the present simply merged. Cloud, a lumber dealer on his way back from a checkup at the Mayo Clinic back in Minnesota, picked me up in his Audi convertible. He took me the final 50 miles to Twisp — top down, winding along the Columbia and up the smaller Methow River as twilight enveloped the mountains. Cloud told me that, like many people who’d picked me up over the years, he had been a hitchhiker, too. That’s how he and his late wife had toured Europe, in fact. And here he was, with the Grateful Dead beaming out of his satellite radio, as if from 30 years before, returning the favor. I almost asked if he’d known Krystal.

It was a sweet, sweet finale. As we drove into Twisp, there was my pal Don, now a newspaper publisher, waiting in front of the Methow Valley News office. We high-fived, which old guys still do these days. I’d made it.

I’m pretty sure that’s the last time I’ll hitchhike. I really am too old for that sort of thing; a highway shoulder is a loud, dirty, assaultive place to spend a day. The long waits and doubts can be wearying. Was I lucky? Was I ever. Luck has always been part of a hitchhiker’s lot, though patience is its partner. It’s possible that at a different time it might not have been feasible. It could have rained. Or that deputy sheriff way back at Albany, Minnesota, might have visited me a second time and hauled me to the local senior center just to get me off the highway.

Instead, in 19 rides over 1,700 miles, I found that it is still possible to hitchhike in America — and get where you want to go. Perhaps we’re on the verge of a renaissance. I’ll leave that to others. But I do believe they’ll find that the American road is still a hospitable place, that our fellow travelers are curious and caring, and that fear will get you nowhere. And that, as ever, a white shirt goes a long way.