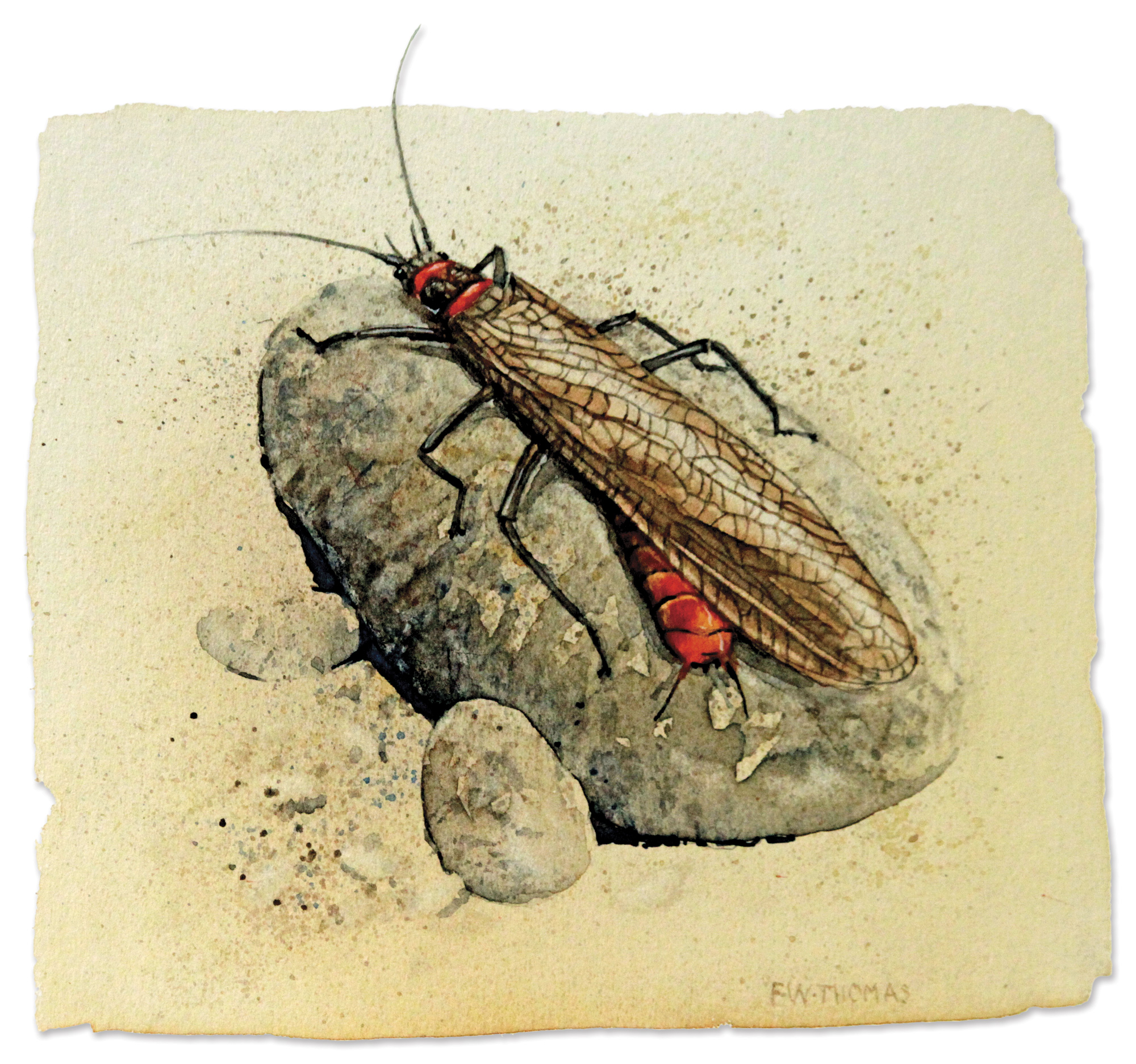 24 Jul Outside: Hit the Hatch

There was a time and it wasn’t long ago when I needed to hit every major western insect hatch within 1,000 miles of my front door.

It wasn’t as if I had to for any reason other than fly-fishing was my life direction and purpose and I harbored an absolute curiosity in testing all the great fishing mysteries.

While doing so I wanted to become an on-the-water educated fly-fishing writer rather than a lodge-hosted well-to-do penning artful pieces with the outcome determined before wading boots were planted in the water and the first gratis five-course meal was served. I believed my tack would provide financial security, a non-restrictive schedule, the opportunity to travel and fish at will, and a super-entertaining if not somewhat daring lifestyle. So, looking back, I guess three for four ain’t bad.

One of the hatches I had to hit, wherever found, was the early-season emergence of salmonflies. The elongated, black bugs that measure 3 – 4 inches with six crooked legs, two wavering antennas and orangish bellies; by their looks you would expect them to feed the Jurassic’s pterodactyls and lizards rather than our Rocky Mountain trout, but the fish consider them big-time protein. I have a lot of respect for trout and only more so when I think of the first introduced rainbows and browns having the cojones to take on one of those bugs for the first time. I have to imagine a “You first,” “No, you first,” “I double-dog dare you,” scenario, like two kids encountering their first escargot at some place like the Rocky Knob after a day spent skiing Lost Trail or floating the Bitterroot, and diabolical parents saying, “Eat one and you’re done.”

Salmonflies are scary looking creatures and, one time, as a young man on the banks of western Montana’s Rock Creek, trying desperately to garner the attention of a tall, slender blonde who was giving me all the signs of eventual victory, I made the mistake of capturing and then releasing several of those live bugs in my standard cab pickup truck. The blonde was tucked in the middle, between a friend and me, with no way to escape. When one of those beasts took flight and landed in that long, beautiful hair, my world turned ugly. I’d stolen defeat from the jaws of victory and I should have known, right then, the salmonfly, like that woman, would only complicate my life. It may have helped if I’d told her that salmonflies don’t bite.

As a western angler, it doesn’t take long to learn that the fish of a lifetime, taken on a dry fly of course, is more likely to be hooked during the salmonfly hatch than any other. A fledgling fly fisher also learns, most quickly if they try to tackle this emergence on their own, that big dreams are busted up easily on the water and that a new fascination with the long rod and whippet lines doesn’t guarantee success; salmonflies disgust on a most regular basis probably because the anticipation for remarkable fishing is so great.

That expectation is delivered by the enthusiasm of guides, outfitters, fly shops and common anglers who can’t help but hype the hatch because someone, somewhere, some time ago, caught some giant brown trout on a salmonfly dry and life along such local streams hasn’t been the same since. If half the thrill of fishing is possibility and potential for legendary trout, the salmonfly hatch is an angler’s Holy Grail.

Still, over the past 20 years I’ve fished salmonfly hatches annually and only infrequently banged up the fish. My tally includes only a handful of fish exceeding 20 inches. Usually I’m ahead of the hatch and the fish are still looking for dainty mayflies and caddis or I’m behind the hatch and the fish are so gorged they couldn’t shove another salmonfly down their snouts if their lives depended on it. I think the salmonfly hatch is a lot like early love and girlfriends lost or the day your best bird dog dies and you swear the pain is too great to own another; time heals the salmonfly wound like it heals interior toil so that when the phone rings and a new mission is proposed, it’s tough to say no.

That was the case a few years ago when a friend, Dan, called from Missoula and said, “Thomas. Salmonflies. Big time on the Big Hole right now. I can meet you at Wise River at nine in the morning.”

This wouldn’t have been such a poor suggestion except that it was nine at night and I already had two hours of Ennis, Mont., bar time behind me with no desire or compelling reason to quit anytime soon. In addition, I had a story due in a couple days and I hadn’t penned the first word. Also, a friend asked me to help move a love seat and couch the next afternoon. To make matters worse, I was headed to Seattle in three days to catch a plane to Alaska and throw for king salmon. Basically, there was no way to justify a trip to the Big Hole, salmonfly madness in full swing or not. So I sighed at Dan’s suggestion and said, “I haven’t had beers in the Wise River Club for a long time. So nine at the Jerry Creek access?” Dan is one of those guys who will take no for an answer, so this explains my status with professional discipline and may indicate why I’m only three for four on the aforementioned scorecard.

I didn’t get out of the Silver Dollar until 2:05 a.m. and I’d left to the disgust of friends who wanted me to hit an after-hours party with them. They criticized me for putting such high value on fishing and assured I’d have a lot better time if I ditched my friend, forgot about the Big Hole and acted like a vampire for another few hours. I was more inclined to walk out of the bar, make a right  turn and cruise past the Claimjumper to see if a girl I liked might be walking out. But, when it comes to the outdoors, I draw the line on being late and leaving a friend out in the cold, literally, waiting for my arrival. So I stood outside the bar on the steps for a moment, glanced down the street, then turned left instead of right, cut through an alley and was in my bed, with the alarm clock set for six, just a couple minutes later.

A few years ago it was still legal to drink beer while driving so I stopped in Melrose, listened briefly to all the salmonfly chatter, and indulged in a ceremonial red beer as I headed up the road to Wise River. The cottonwoods were leafy green, the tanagers flitted about, young calves stared through the barbed wire and the Big Hole, in classic fashion, was gushing downstream with its brownish, tea-colored tint. Already there were a few salmonflies making their awkward play from one brushy bank to another.

Dan went against his delinquent pattern and was waiting at the access when I arrived. I honestly didn’t know what to expect that day having been duped so many times by the looks of a salmonfly hatch. But the fishing perked right off the bat and we were barely off the launch when a fish turned on a size-4 Cat Puke.

The morning was hit and miss with some banks holding eager fish and others offering only a few trout. Mostly I remember rowing Dan downstream, each of us enjoying the weather as much as anything (Dan’s a seasoned Montana angler who didn’t react with anything more than his eyes when salmonflies landed on his face and neck, even while taking regular pulls off his standard hydration choice when it’s June 15 and 70-some degrees: 12-ounce bottles of Miller High Life). So, I’d had a beer at 8 a.m. and now Dan was in his cups before noon. There are people who could criticize, but early summer in Montana is a time to celebrate surviving another brutal winter and I’m less likely to punish myself at that time, or anyone else for that matter, for our celebratory decisions. Good lord, do you know what 30-below and a 20-mile an hour sustained wind feels like? Dan’s Casper-white skin spoke to that.

The Big Hole is often crowded during the salmonfly hatch, as are many streams, but this day seemed particularly remarkable. The thing is, there were more non-fishing boats than usual, filled with young women, and they would drift lazily down the prime banks with the girls splashing and singing and the trout probably diving for China. It was enough to piss-off serious anglers like ourselves, but we had suitable libation onboard (and binoculars, too) so it seemed easy to say, Well, this is Montana and multiple use is the new way of life. It got easier to take when I cast in front of a splash-and-giggle boat and pulled a solid brown trout off the lip of that raft. One of the girls snarled and said something that guessed at my sexual preference and oral ability and I responded, “I am a lot of things, but I can assure you I am not that!”

Laughs all around and an explanation that they were part of Evil Knievel’s daughter’s bachelorette party and suddenly we were tied to their raft bobbing down the river past our predetermined takeout.

There were still fish to be caught and for a couple hours every trout in the river was looking up. Almost every cast garnered attention, some sort of bulge near the fly or a flash of silver or gold just under it. Occasionally a cast ended with a trout landed and released but by now we’d done that often enough that only a monster would have merited the camera.

So, we’d rolled the dice and guessed right and finally hit a salmonfly hatch on the nose. It was exactly as billed for all those years, an amazing natural event with big fish boiling on the banks, one of the most exciting experiences an angler could hope for. It made all the shoptalk and the excitement seem valid and it reignited my fever to follow the hatch. Let’s see, I thought, as we pulled off the river that day, if I cancelled the Alaska trip I could spend more days on the Big Hole and then head for the Yellowstone and eventually wind up my salmonfly fever on Idaho’s South Fork Snake.

If that hatch-chasing mentality sounds unreasonable, just kids’ play when an adult could be indoors at home or at the office, playing that competitive financial game none of us can win, consider what hatch chasing keeps us from.

When we pulled off the Big Hole that day the girls asked where we were from. I said Ennis and they asked if I knew any of the people who got shot at the Silver Dollar the night prior. I told them nobody got shot and that I was there until closing. They said one was dead and six others were seriously wounded. Later I learned that a gunman, who’d been in the bar with us that night, had shot most of my friends as they left the bar minutes behind me. The one who died? He was the first to turn right, headed for the Claimjumper.