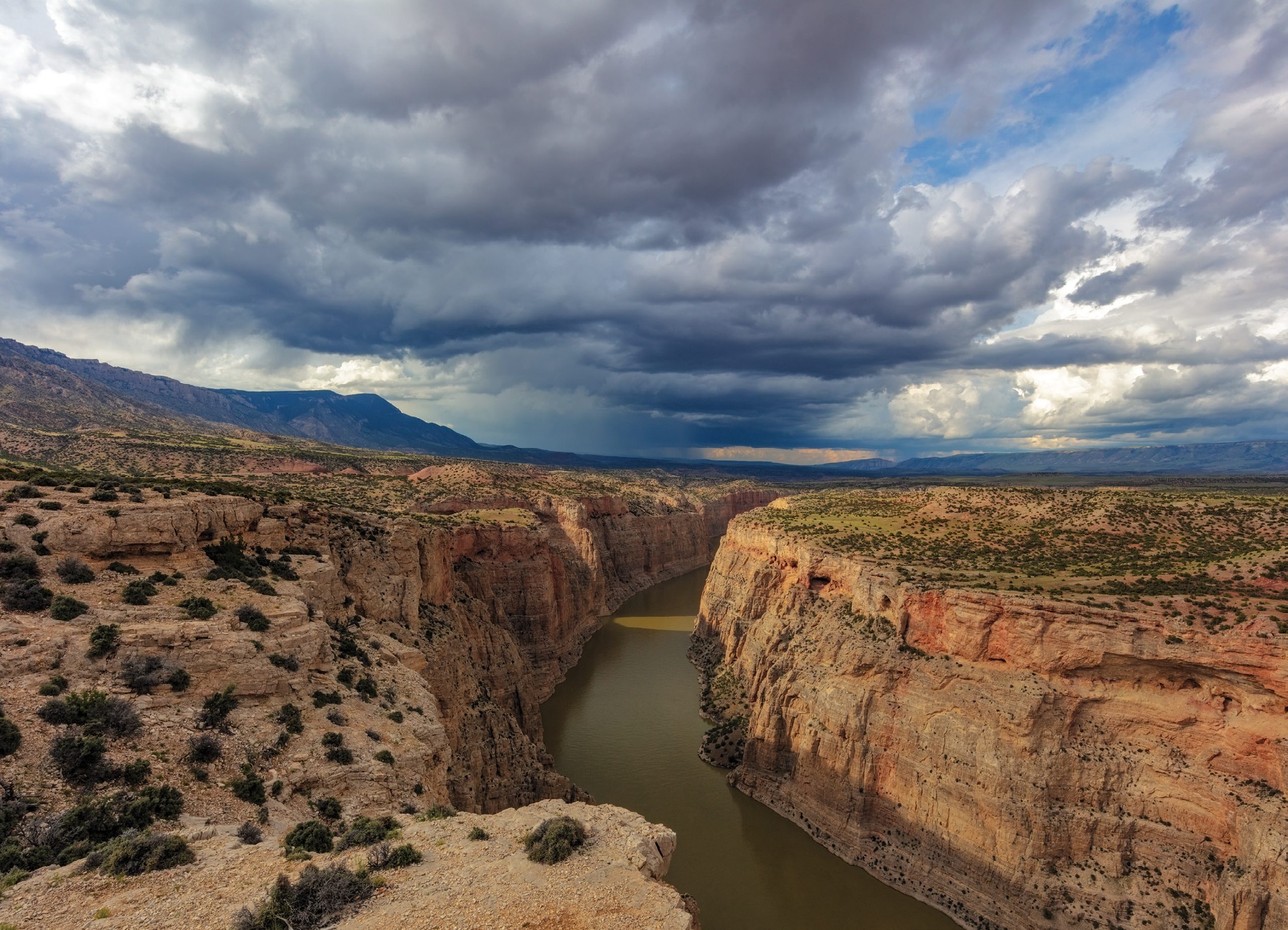 The Bighorn River at the base of Yellowtail Dam is a favorite spot for anglers. | Photo by Chuck Haney

More than 50 years ago, southeastern Montana’s landscape changed forever when a 525-foot-high dam was erected on Crow Tribal land to control flooding, generate power, and provide irrigation to farms and ranchlands. The added benefit was the creation of the striking Bighorn Canyon National Recreation Area. Since the dedication of Yellowtail Dam in 1968, hundreds of thousands of visitors have enjoyed the beauty of Bighorn Canyon on foot, by boat, or with waders on and fly rods in hand. 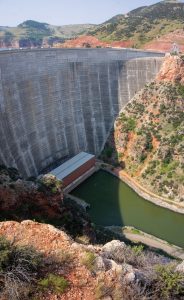 In some areas, the magnitude of Bighorn Canyon’s walls are awe-inspiring. | Photo by Joshua Bergan

“It was part of the Missouri Basin Program,” explains Christy Fleming, chief of interpretation for Bighorn Canyon. “In 1944, the Pick-Sloan Act enabled the Army Corp of Engineers to develop a solution to regulate water levels. It was one of the most expensive plans ever instituted for a river basin. When full, it backs water up for 70 miles.” That’s a pretty long stretch from Montana into Wyoming, with several outdoor recreation areas that meander through it, including the Bighorn River, which flows into the Yellowstone and, eventually, the Missouri River. And while the dam delivered what it was intended to, like many large-scale public works projects, it didn’t come without conflict. 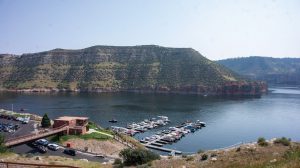 The Ok-A-Beh Marina near Fort Smith features a range of boat rentals and other amenities. | Photo by Joshua Bergan

Ironically, the project was named in honor of Robert Yellowtail, the chairman of the Crow Tribal Council at the time, who was greatly opposed to damming the river and flooding Bighorn Canyon. Since it was located on the Crow Reservation, the dam’s construction required the acquisition of thousands of acres of land that was sacred to the Tribe. As a result, an agreement was reached, in which the government granted the Crow Tribe both water rights and protection of surrounding acreage.

As I wind my way through the hairpin turns and curves that lead to the entrance of the Bighorn Canyon Recreation Area, I’m greeted with the wide-open vistas that are synonymous with Montana. There is not a person or bison in sight — the animal I always imagined seeing in places like this. Sound like a city girl? Well, I am. Originally from the East Coast, I married a Montanan, and most trips to Big Sky Country include us climbing aboard his cousin’s motorboat for a breathtaking summertime adventure in Bighorn Canyon. For me, it’s the deep-set caverns and bellowing walls that rise above the dammed lake that are so awe-inspiring. According to local consulting geologist and former Montana State University professor Tom Zwick, the entire sequence of rocks in the canyon date from the Precambrian era through recent times. “The oldest rock in the canyon is about 2 billion years old,” he says. “The limestone cliffs above the dam are about 320 million years old.” 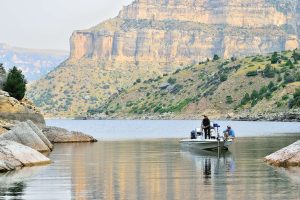 The placid waters in the outlying coves throughout Bighorn Canyon are popular spots for fishing by boat. | Photo by Barry and Cathy Beck

Marvin Dawes is a private tour guide, park ranger, and Crow tribal historian who lives in Crow Agency. He often educates visitors about the history of the nearby Little Bighorn Battlefield and Bighorn Canyon. “Before COVID, I would stand on a high point behind the dam — a location known as Four Winds — where you can see forever,” he says. There, he would tell stories, and one was about how Bighorn Canyon got its name. Legend has it that a widow with a young son remarried a man who had less than warm feelings toward the young boy. After taking him hunting one day, the man returned alone. He told his wife that bighorn sheep on the mountain had distracted the boy, causing him to fall to his death. There have since been stories told about seven bighorn sheep, a boy raised by them, and related constellations.

The pristine lake is up to 450 feet deep in places and full of walleye, perch, carp, and catfish. But it’s the anglers who come to fish in the cold waters at the base of the dam that makes the tourist dollars churn. “Before construction, the base of the dam was a warm-water fishery,” says Zwick. “Post dam, the Bighorn River turned cold.” Stocked with trout, it became known as one of the best world-class fishing sites in the state. “This is what brings people to Montana,” Zwick adds. And he’s right: Each year from March through November, anglers are drawn to one of the largest stashes of brown and rainbow trout in the state. And, according to the National Park Service, as many as 38 different species of fish have been caught on the Bighorn River. 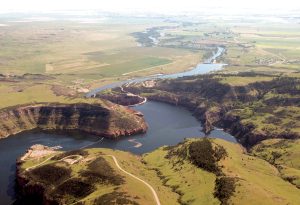 The Bighorn National Recreation Area spans 120,000 acres and provides ample opportunity for outdoor recreation in all its favored forms, from fly fishing and boating to hiking and camping. | Photo by Bureau of Reclamation

However, Fleming adds that in addition to angling, other watersports have also become more popular in the area. “There are kayaks, canoes, and now paddleboards on the lake,” she says. Larger crowds can rent pontoon boats in Fort Smith — the closest town — and kayak tours are available. Many regulars keep slots in the Ok-A-Beh Marina as well. “The dam created a national park held for the public for future generations,” she adds.

The Bighorn Canyon Recreation Area is about two hours from Billings. There are several campsites near Fort Smith, including Afterbay and Grapevine, both of which offer RV and tent sites and are open year-round. Whether by boat or on foot, visitors should be on the lookout for wildlife, including osprey, eagles, elk, and bears, so binoculars are recommended. 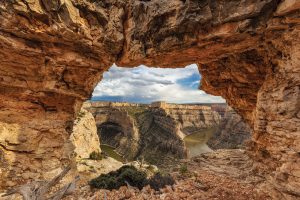 Caves and unique formations draw a variety of rock hounds and explorers. | Photo by Chuck Haney

Next summer, I’ll be back, sharing the water with boaters and anglers, but, this time, I’ll more fully understand the incredible ancient history of this special place. And since it’s a far cry from my home on the East Coast, maybe I’ll even stop looking for the local deli.

A lifelong freelance writer, Chrysa Smith has covered stories for national and regional magazines. Thirty-six years ago, she married a boy from Laurel, Montana, and has since enjoyed regular trips to experience the beautiful landscapes of Big Sky Country from their home in the suburbs of Philadelphia; chrysasmith.com.